A Brief History of the Norton P11, P11A, and Ranger – Everything You Need To Know 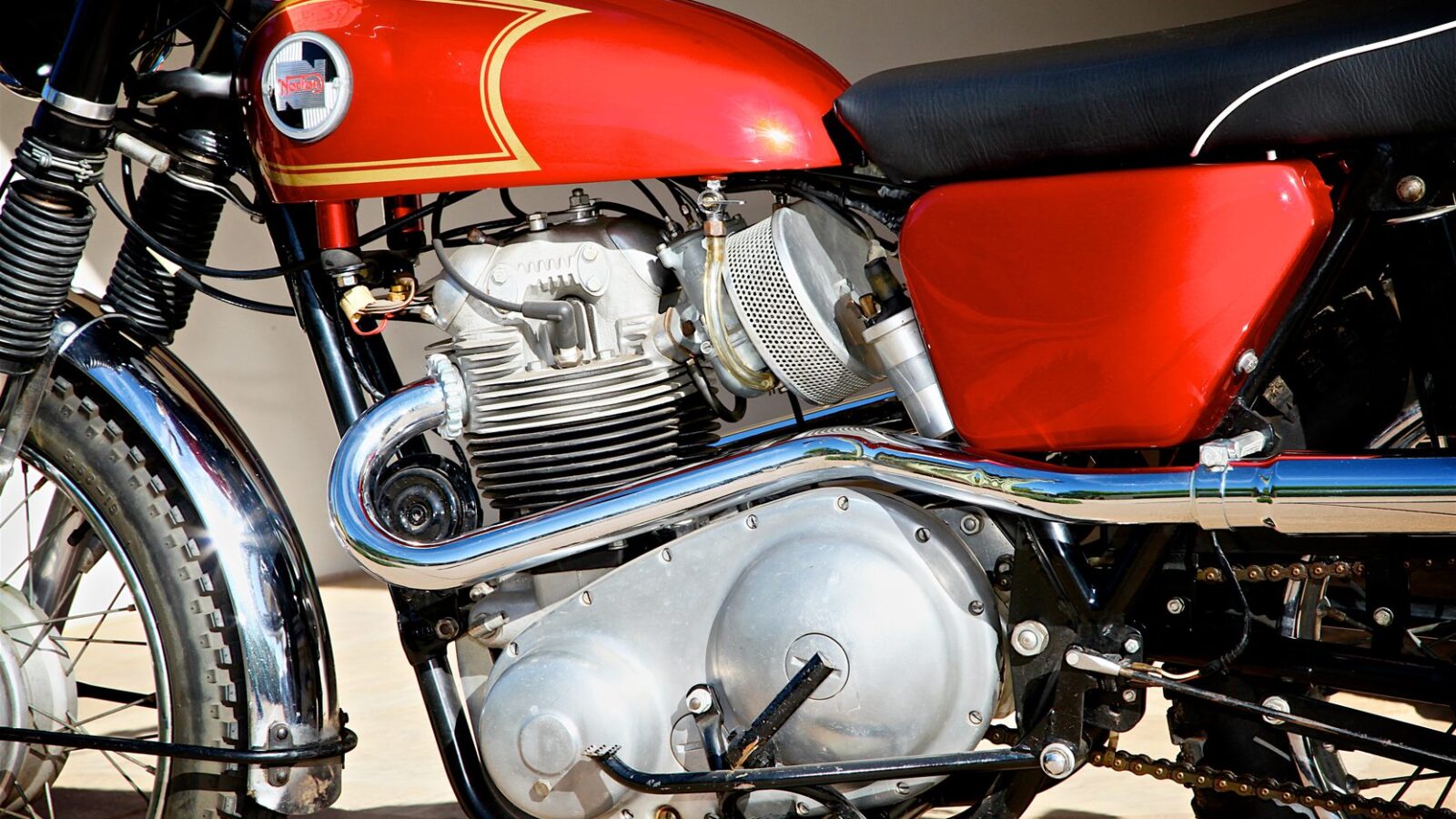 Bob Blair And A Desert Sled Called The P11

The idea for the motorcycle that would become the Norton P11 began in 1966 with Southern California Norton distributor Bob Blair who reasoned that if you took a Matchless G85 CS (Competition Scrambles) frame and squeezed a Norton Atlas 750cc parallel twin engine into it then you might just have a “desert sled” type of bike that would be able to beat the seemingly unbeatable BSA Hornet and Triumph TR6C.

The Matchless G85 CS frame was made using Reynolds 531 tubing, a manganese–molybdenum, medium-carbon steel alloy, which was the class leader for use in racing cars, motorcycles, and competition bicycles as well as having uses in aircraft construction. 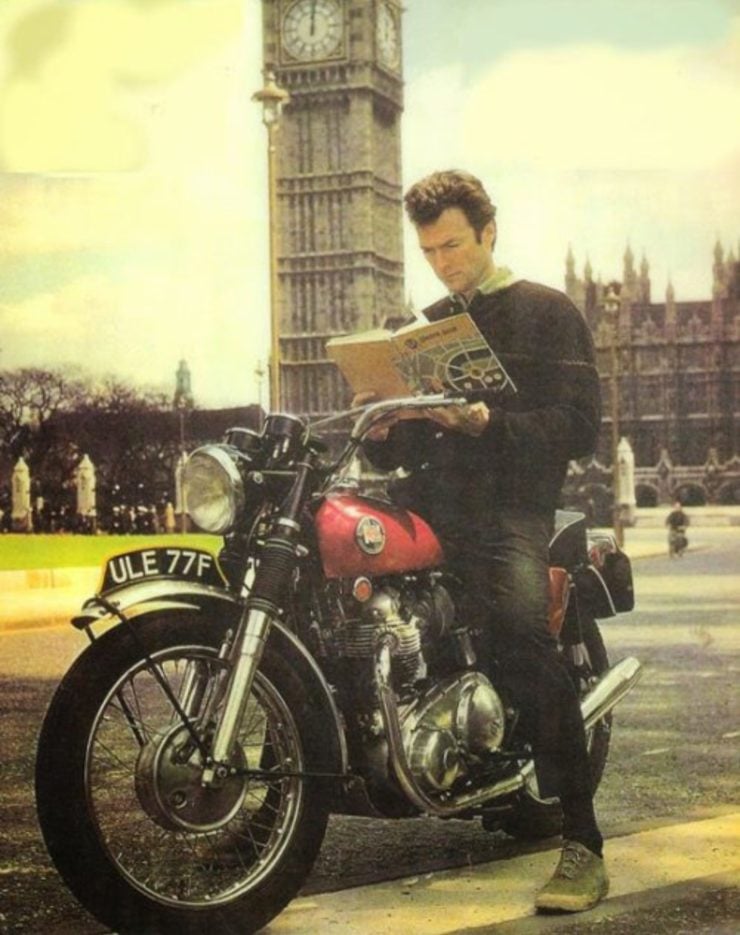 Clint Eastwood on his Norton P11 in London

Joe was not impressed, he did not think it could be done and he wasn’t willing to give it a try, he just didn’t think it was worth it, but he said that if Bob wanted to build one he could go ahead and build a prototype himself.

Bob Blair still believed it was worth it and so he discussed this with ZDS Motors fabricator Steve Zabaro. Steve Zabaro was enthusiastic, so enthusiastic that he donated his own slightly crashed Matchless G85 CS as the base bike. Steve Blair extracted the engine from a new still in the crate Norton N15 and the two put in the workshop time to make the project happen. 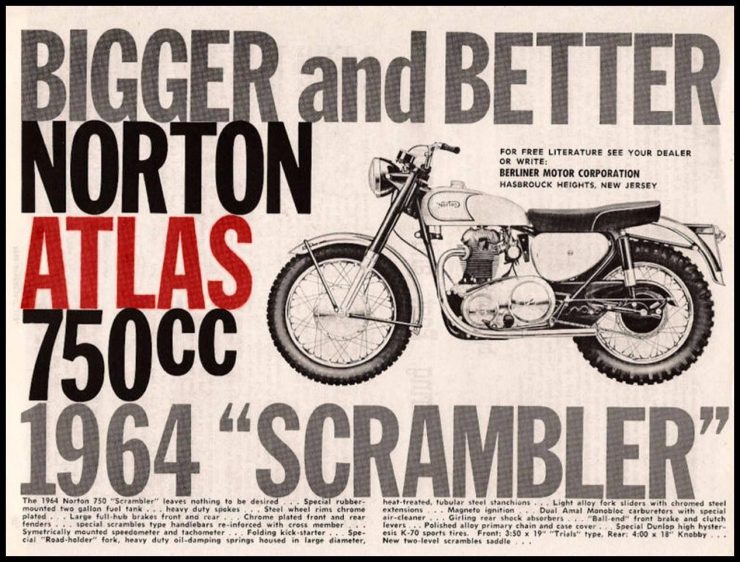 Joe Berliner had been right in his assertion that the project would require a lot of effort, Bob and Steve understood that when they took the task on. They had to fabricate an alloy adapter plate to join the 750cc engine with the AMC four speed gearbox.

To ensure correct chain alignment for the final drive a system of frame spacers/distance pieces was created. The magnesium rear hub of the G85 CS was retained as were the front Teledraulic forks, wheels, handlebars and seat. A custom fabricated oil tank was made, as was a custom high mounted exhaust system.

The completed custom bike had taken three weeks to create and it showed great promise in test riding: but the next step was to get the bike into the hands of a seasoned desert racer and see if he thought the bike was a viable competition, and perhaps commercial concern. 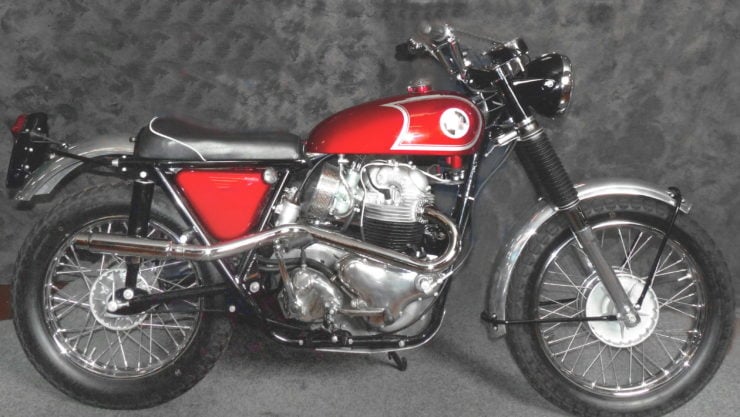 Bob Blair put the prototype bike into the hands of Mike Patrick, and he with friend Tom “Tiny” Maxwell took the bike out into the desert to, in Mike’s own words “run the crap out of it”.

Mike was nursing a sore shoulder from a crash and although he tried to race it for a while the pain barrier turned out not to be one he would push through. But Mike was very impressed with the bike and when he returned it to Bob Blair he told him to make sure the guys in England did not change anything, it was good to go just as it was.

The “Cheetah” Becomes the Norton P11

Not knowing if the folks at AMC (Associated Motor Cycles) would even be willing to build the motorcycle he wanted Bob Blair sent the prototype across the pond to England to see if they would indeed put the model into production.

He and Seattle ZDS distributor Bob Budschat and the son of Joe Berliner, Mike Berliner displayed the prototype “Project 11” at the London, Earls Court, trade show of 1966 where it was seen by the new owner of Norton Villiers, Mr. Dennis Poore. The result was that the decision was taken to get the bike into production for 1967.

Bob Blair suggested to the AMC boys that nothing should be changed but, boys will be boys, and the boys at Norton in Britain could not resist making a few subtle improvements. Oftentimes when people do that it turns out for the worse, but in this case the improvements were really improvements.

The magneto ignition of the prototype was replaced with a twin coil capacitor system, the monobloc carburetor of the prototype was replaced with twin Amal Concentric carburetors, an alloy sump guard was added to ensure that the vulnerable bottom of the engine and transmission had some protection against destructive encounters of the rock kind, and both a tachometer and speedometer were added so that the Americans would really know just how fast they were going.

Happily the nice English people at Norton were happy to put the bike into production and the bikes made their way to the United States to do battle with their arch rival “desert sleds“, the BSA Hornet and Triumph TR6C. 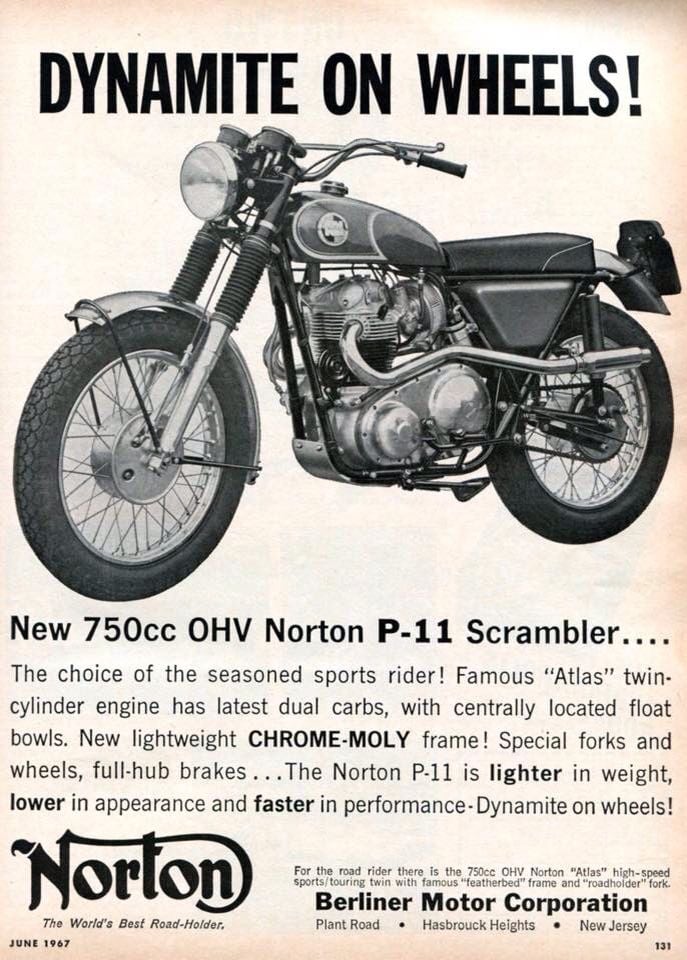 The British had initially intended to call the new bike the “Cheetah 45” but its in-house project name had been “Project 11”, and ultimately this was simply shortened to “P11”. At Norton in Woolwich, London, the P11’s were manufactured as parts bin specials with the intention that Norton could convert some of its inventory of spare parts into nice crisp banknotes.

Once it had been studied by Norton Villiers the prototype bike was returned to ZDS in the United States and was subsequently acquired by motorcycle parts business Domi Racer, of Cincinnati, Ohio, when ZDS went out of business.

They in turn sold it to a gentleman who resides near London in Britain, and the bike is thought to be still in his care.

The P11 Proves to be an “Arse Kicker”

It was in 1967 that the first of the production P11 bikes (Number 121013) arrived at ZDS and was taken by Mike Patrick who modified it according to his tastes and took it racing for the 1968 competition year.

Customers initially did not pour into Bob Blair’s ZDS Motors to exchange nice crisp US dollar banknotes for Norton P11’s however. The P11 was quite expensive priced at USD$1,339.00, and Norton was a less well-known brand in the world of off-road racing.

The P11 would need to establish a reputation for itself before sales could be expected to boom.

Mike Patrick was the guy whose Norton P11 was hoped to establish that “street cred” and indeed he won the Heavyweight Championship in 1968. The competition successes of the P11 served to boost sales but that was however to be the last victory on the P11 because by the following year lightweight two stroke machines would come to dominate and the days of the Norton P11’s dominance were swiftly brought to an end. 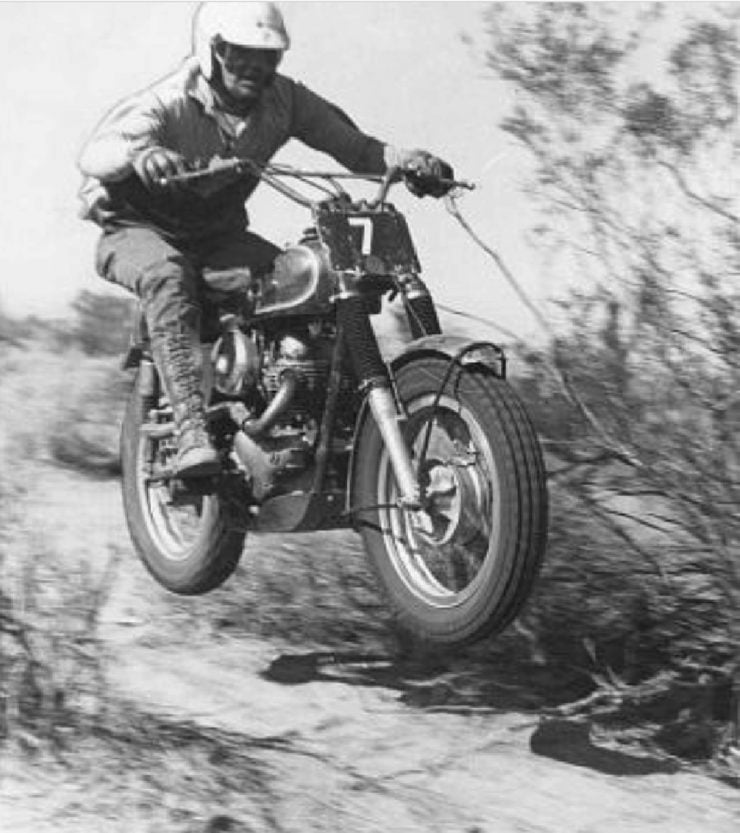 Mike was riding against some of the greats of desert racing of that period including the likes of Bud and Dave Ekins, and a guy with the unlikely name of “Harvey Mushman”, who in reality was Steve McQueen but he had to race under a pseudonym as his Hollywood studio had forbidden him from motorcycle racing.

For Steve McQueen the word “forbidden” simply meant being discreet about his desert racing hobby.

Mike Patrick had fallen in love with the P11 however and said of it “Nothing is, or ever will be, a match for the big Norton sailing across the desert.”

In 1968 the P11 was superseded by the Norton P11A, a bike with a somewhat different set of qualities. The P11A was made as a road going motorcycle having a more comfortable seat. This bike was heavier, and had low mounted tapered street type exhaust pipes fitted with removable end-caps and baffles.

The Norton P11A Ranger appeared in 1969 and this was even more a street bike, and was also made as a “parts bin special” which resulted in the specification changing during production to use up the parts that remained in the bin.

This meant that the model was made with no less than four different styles of oil tank, two of which were alloy and two of steel. Fuel tanks were either 3.6 gallon or 2.2 gallon. Forks, frames and handlebars progressively changed as did the ignition systems, with two different types being fitted. 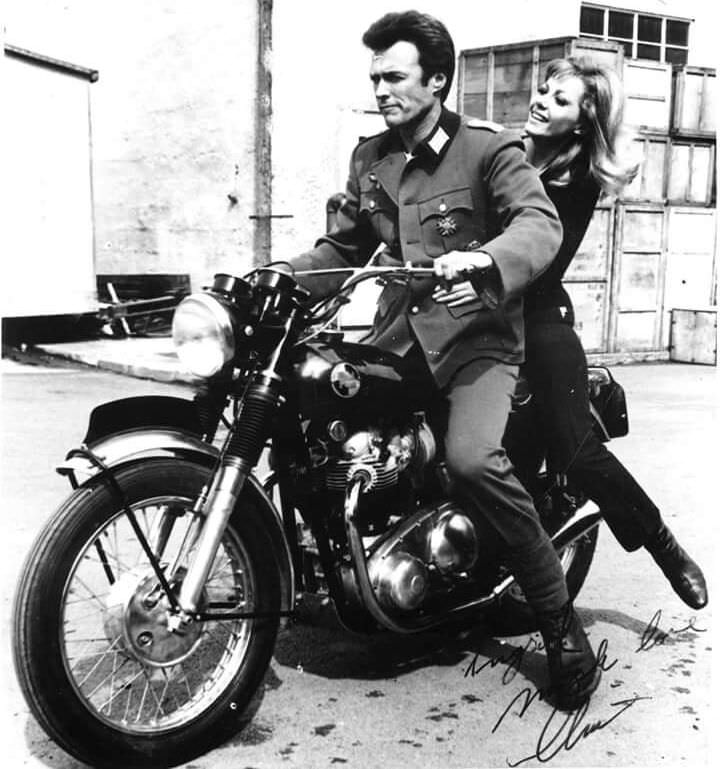 By the time the last of the P11A Rangers were being produced the Norton Commando was in production and so late model Rangers were fitted with cylinder heads made with Commando castings.

The final iteration of the P11A Ranger was the Norton Ranger 750 which featured strengthened side stand mounting brackets, and a brake light operated by the front brake. This model had a “Ranger 750” decal on the oil tank and battery cover.

The P11A Ranger was no slouch in the performance department as evidenced by the 1970 performance of Leo Goff who set a number of drag racing records including an 11.58 second quarter mile with a finishing speed of 118mph. 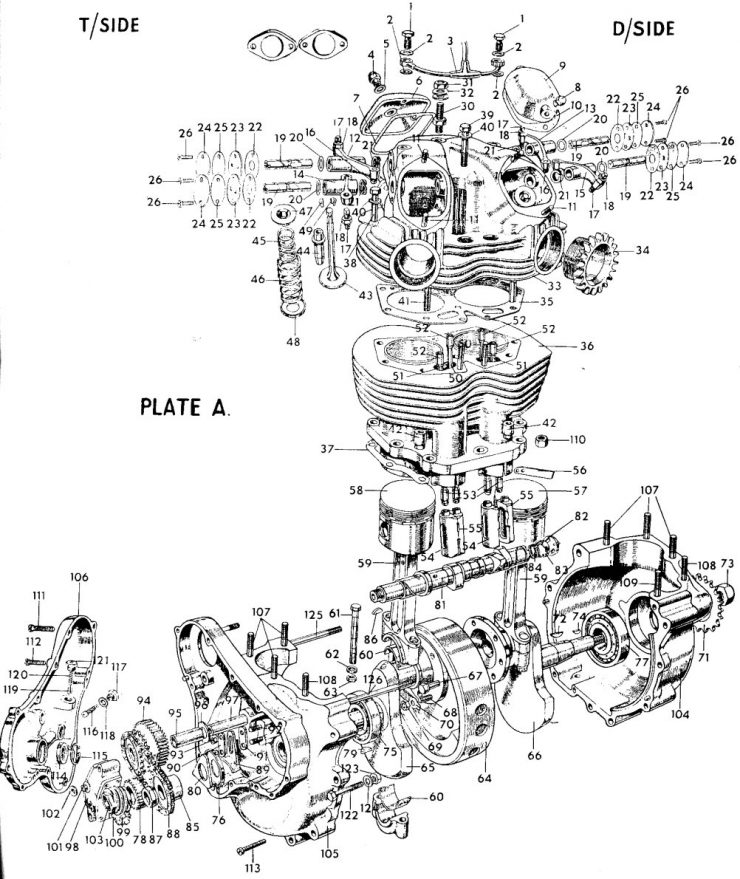 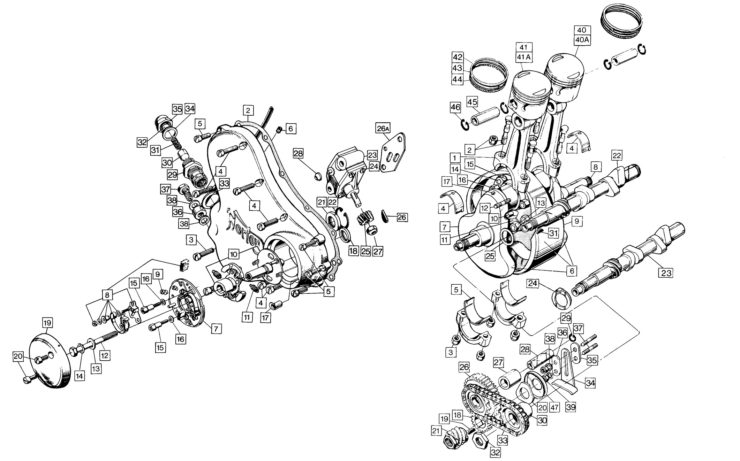 The Norton P11 was a star that shone all too briefly. It established itself as a desert sled that was enormously enjoyable to ride, and as a bike with a truckload of British Norton personality.

Nowadays the original bikes are collector’s items but if someone wants to obtain an original it is necessary to check the bike’s providence thoroughly, and this is not a particularly easy thing to do as there is some debate over frame numbers and other parts fitted to the original machines.

Not only that but given that the original P11 was built as a competition machine it is to be expected that they will have been modified, or that people have constructed their own version based on whatever happened to be available in their own personal parts bin.

But if you are looking for a bike that delivers the riding experience of which Mike Patrick tells us “Nothing is, or ever will be, a match for the big Norton sailing across the desert.” then a P11, either original or reconstructed, is likely to be the bike for you. 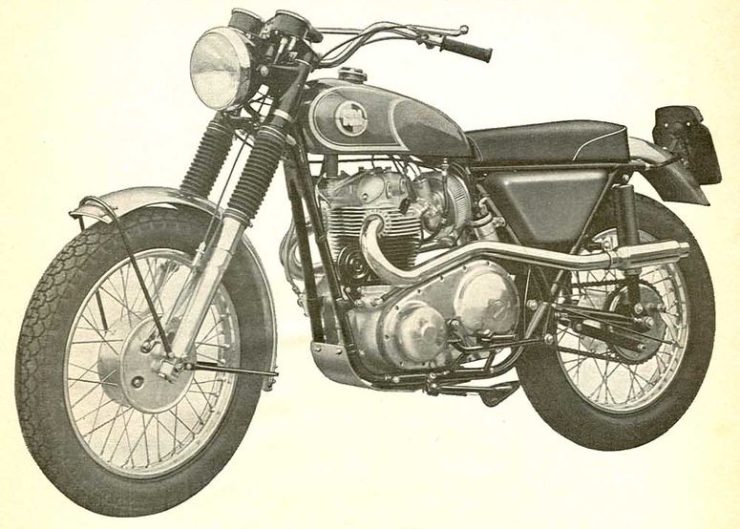 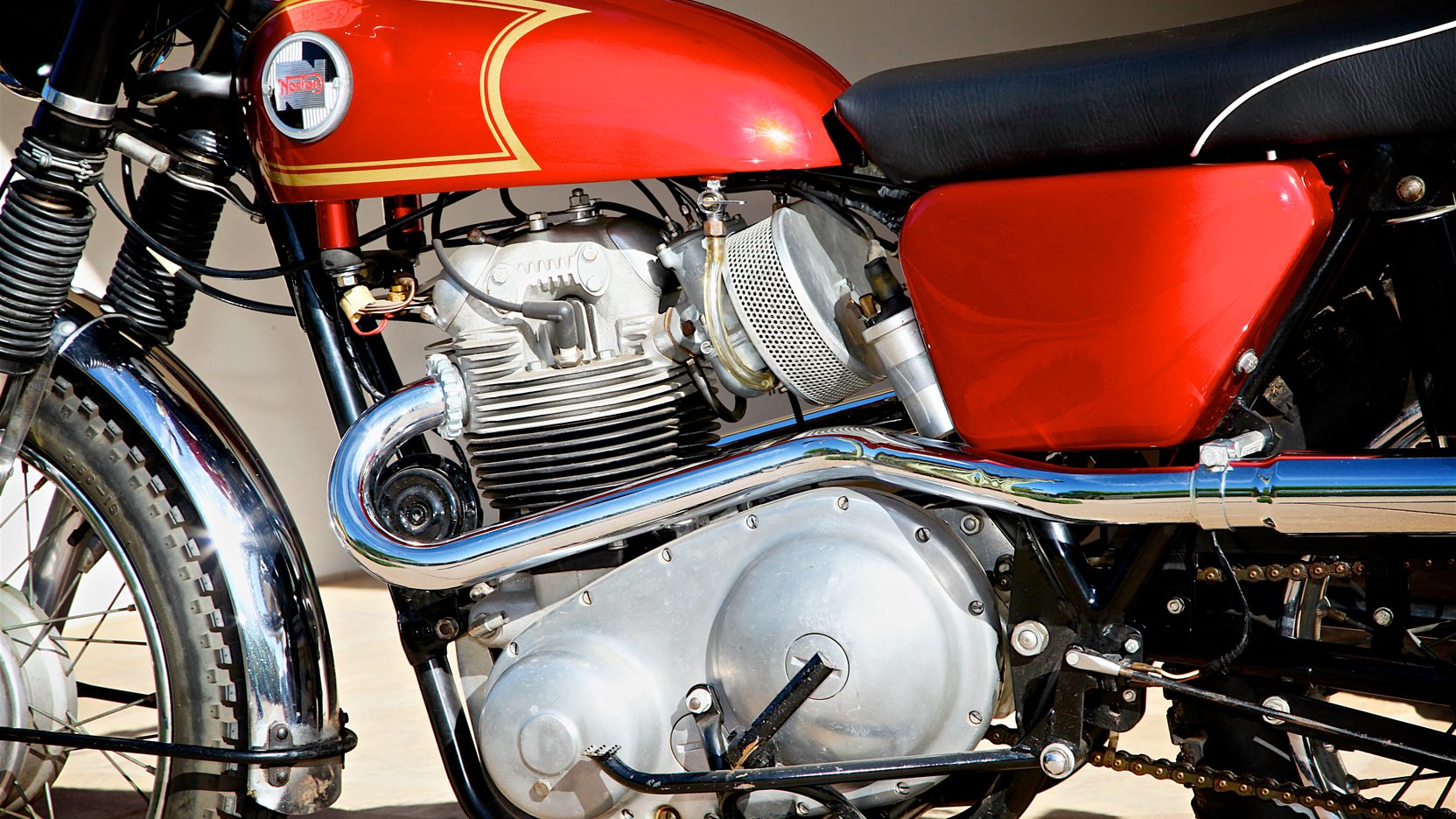