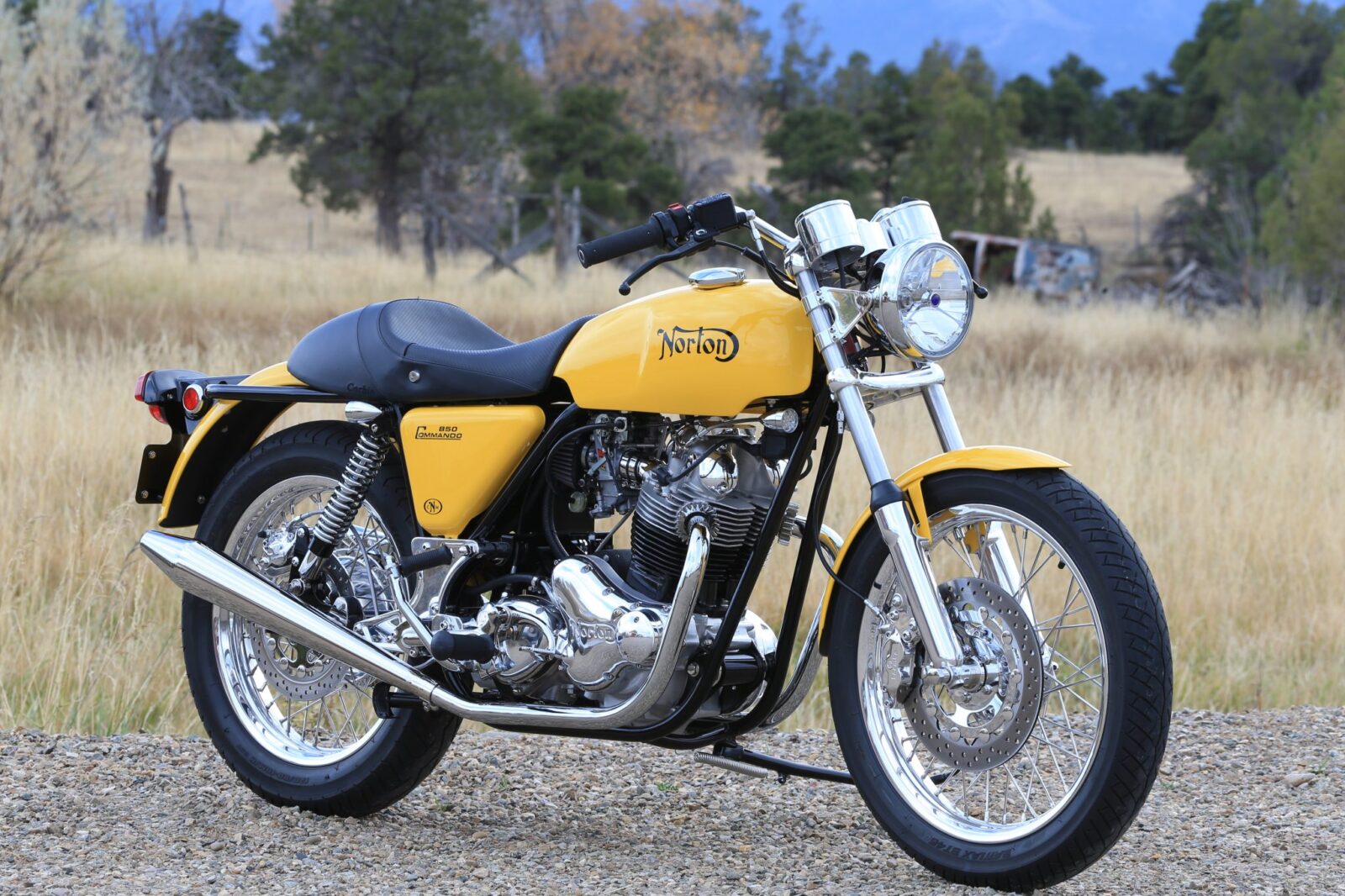 The Beginning of the Commando

In 1967 the British Norton-Villiers company revealed the Norton Commando to the world, it wasn’t the most modern bike even by late-60s standards but it did have an iconic engine, race-bred suspension, and a frame developed by a former Rolls-Royce engineer.

Between the years of 1968 and 1972, the Norton Commando would win the highly coveted Motor Cycle News “Machine of the Year” award 5 consecutive times – a record that stands to this day. Norton didn’t have a huge budget to develop their new top-of-the-line model, so the engine was brought forward from the Atlas – a 745cc parallel twin pre-unit (meaning the engine and transmission are in separate cases) engine that was originally developed back in the late 1940s as a 497cc motor by Bert Hopwood.

Using such an old design had its drawbacks, but the upsides were that Norton knew the engine and its capabilities, and because it had a separate transmission it could be lent forward in the new Norton Commando frame to shift the centre of gravity without needing a new crankcase design.

The new frame was the work of former Rolls-Royce engineer Dr. Stefan Bauer, he had the unenviable task of replacing the much-loved Featherbed frame. Although popular, the Featherbed had not been designed by classically trained engineers, but by Rex and Cromie McCandless – a pair of talented motorcycle racers from Northern Ireland. Bauer’s new frame was entirely different to the Featherbed, but offered better rigidity and a more direct connection between the steering head and swing arm pivot.

Over the course of its 11 year production run, the Commando lived through the period that will be forever remembered as a period of significant upheaval in the formerly dominant British motorcycle industry. A combination of outdated management styles, worker insurrection, and foreign competition left the industry in tatters by the end of the ’70s.

The Birth of an Icon

In some respects, the Norton Commando is a two-wheeled phoenix that rose from the ashes of the industry that created it. Although it wasn’t built with the most modern engine, brakes, or gearbox, it somehow came together as more than the sum of its parts. Today, over 40 years later, it’s one of the most popular British motorcycles of the era – if not the single most popular outright. 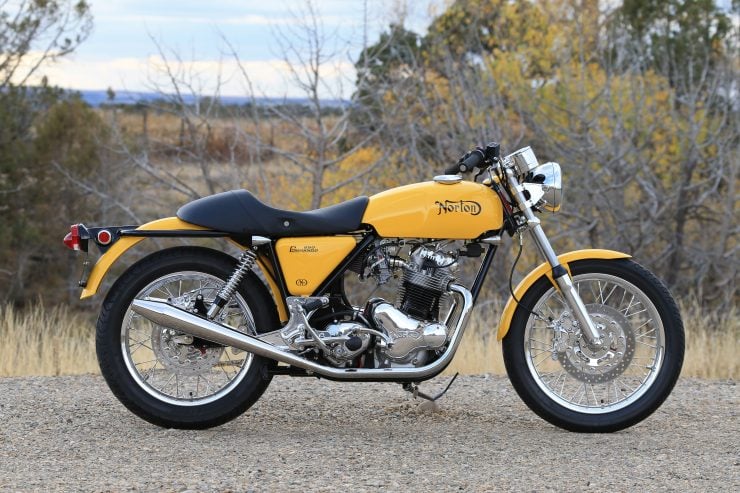 Becoming a lifelong fan of the Commando is usually just a matter of kickstarting one for the first time, clunking it into first gear, and launching yourself down the road. Or at least it was for Matt Rambow – the brilliantly named Swedish owner/operator of Colorado Norton Works.

The Story of Colorado Norton Works

Matt grew up in Sweden, often sneaking cheap old bikes into his mother’s basement and pulling them apart – to this day he still hasn’t explained to her exactly how the downstairs drain got blocked with motor oil. After a ski trip to Colorado he became infatuated with the United States – so he flew back to Sweden, sold everything he owned, and moved to Colorado permanently.

After his first ride on a Norton Commando in Vail, he gave up his hobby of restoring American muscle cars and devoted himself to the resurrection and restoration of Commandos. He established Colorado Norton Works as a small business in the early 1990s, despite being told that it was a terrible business idea doomed to failure.

Today the doomed business has expanded to 4,500 square feet of space, there’s a build area with 7 hydraulic lifts, a machine shop, a service shop with 3 lifts, and a large parts and shipping room. CNW has rebuilt over 130 Commandos to an exceedingly high standard, far better than they would have left the factory originally, and the company provides a huge array of parts for Norton owners around the world – many of them designed by Matt and his team in Colorado.

The 1975 MkIII Commando you see here is one of the more recent builds from CNW, it’s been through the full rebuild process which takes a minimum of 250 hours per motorcycle and includes a staggeringly detailed list of new and improved parts.

The MkIII Commando came from the factory with an electric starter, which makes life significantly easier than the traditional kickstarter – longtime Norton Commando rider Keanu Reeves once commented that the number of kicks required to start the bike was directly proportional to the number of people watching. The more observers you have, the more kicks it’ll take.

Performance improvements to this bike include a brand new head by Fullauto Technologies, cast from 6061 T6 aluminium and offering high-flow ports, and no porosity issues. This new head is paired with a set of Keihin Flat Slide carburettors, a custom dual Keihin intake manifold, and a set of stainless steel reverse cone mufflers.

The stock point ignition has been swapped out for a far more reliable Tri-Spark digital ignition, Brembo brakes on the front and back, far more subtle indicators, and a Corbin seat that’ll stay comfortable on longer rides. The full catalogue of parts and process used on each new CNW Commando is extensive and it can be reviewed here on their official website.

Matt and his team build between 6 and 9 Commandos per year, and their online store provides both products and services required for many who are restoring their own Nortons at home. If you’d like to see more from Colorado Norton Works or commission Matt to build you a bike, you can click here to visit the site. 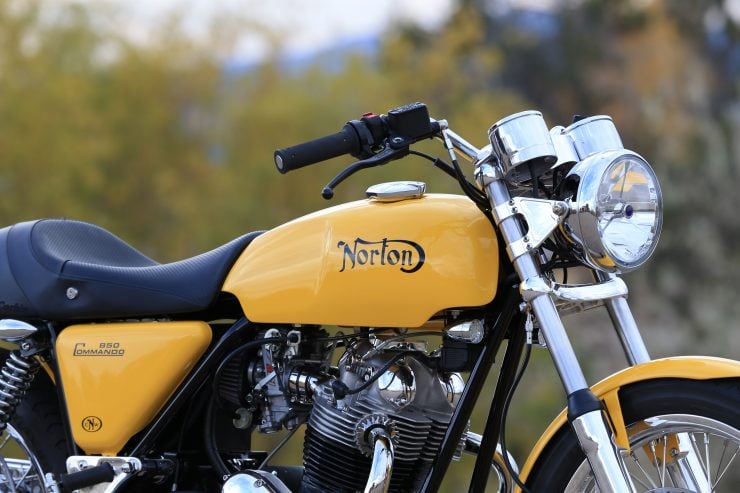 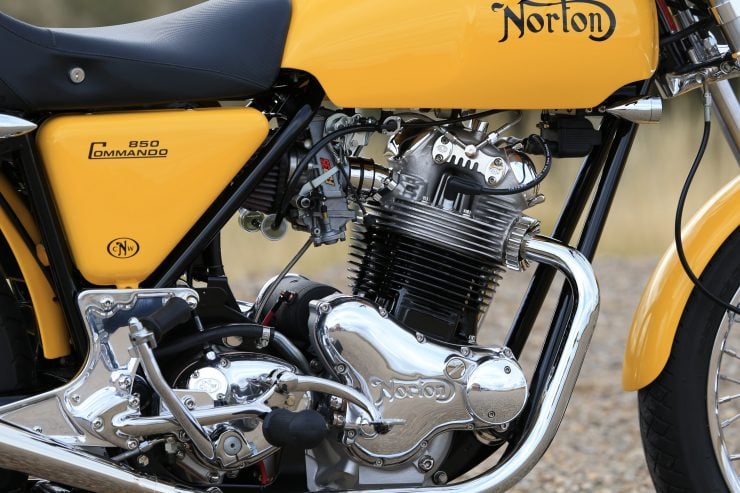 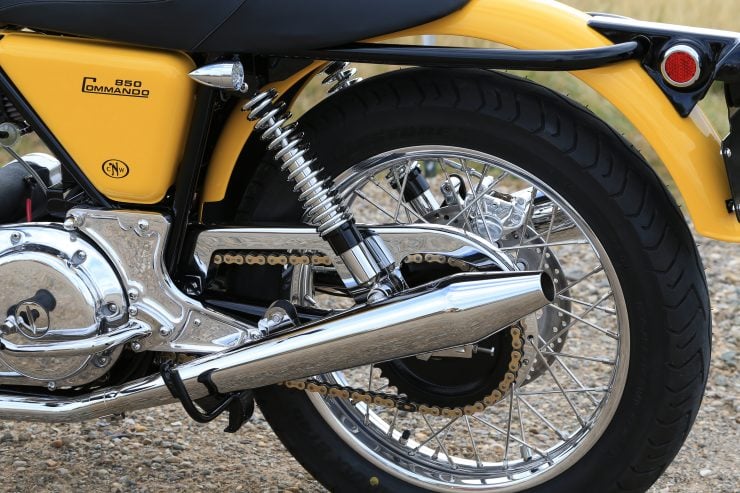 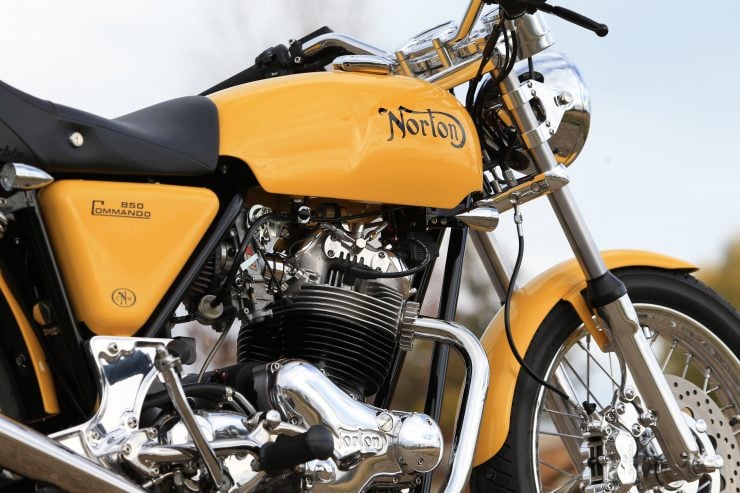 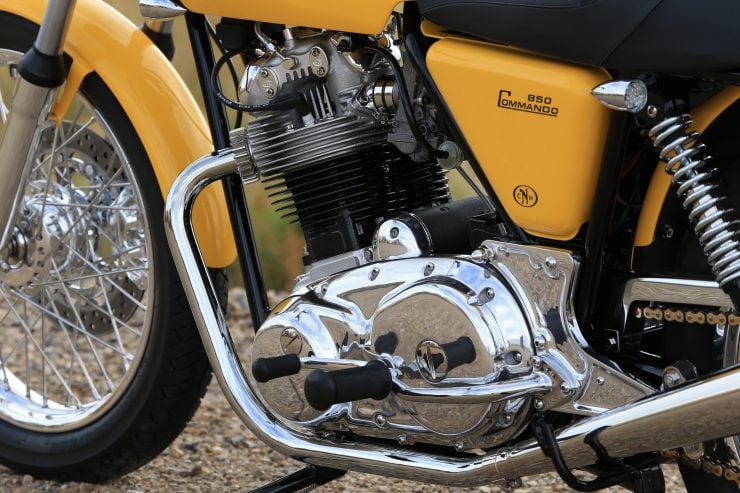 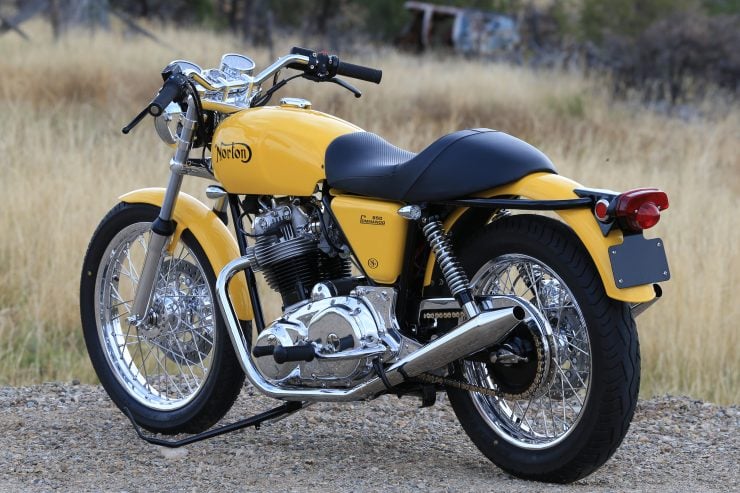 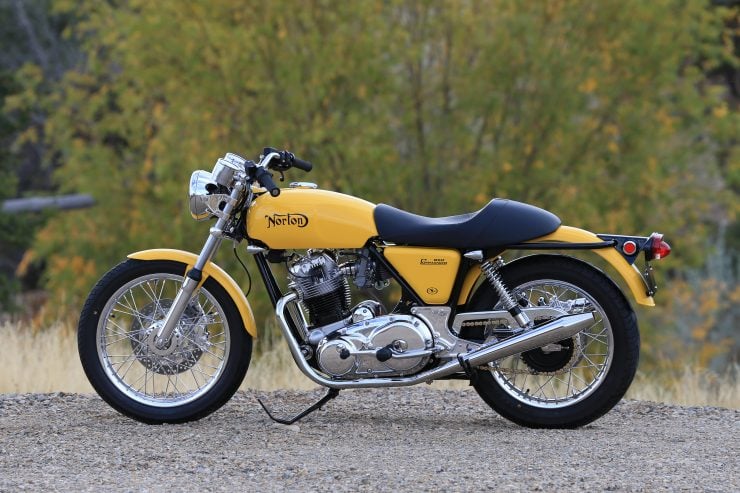 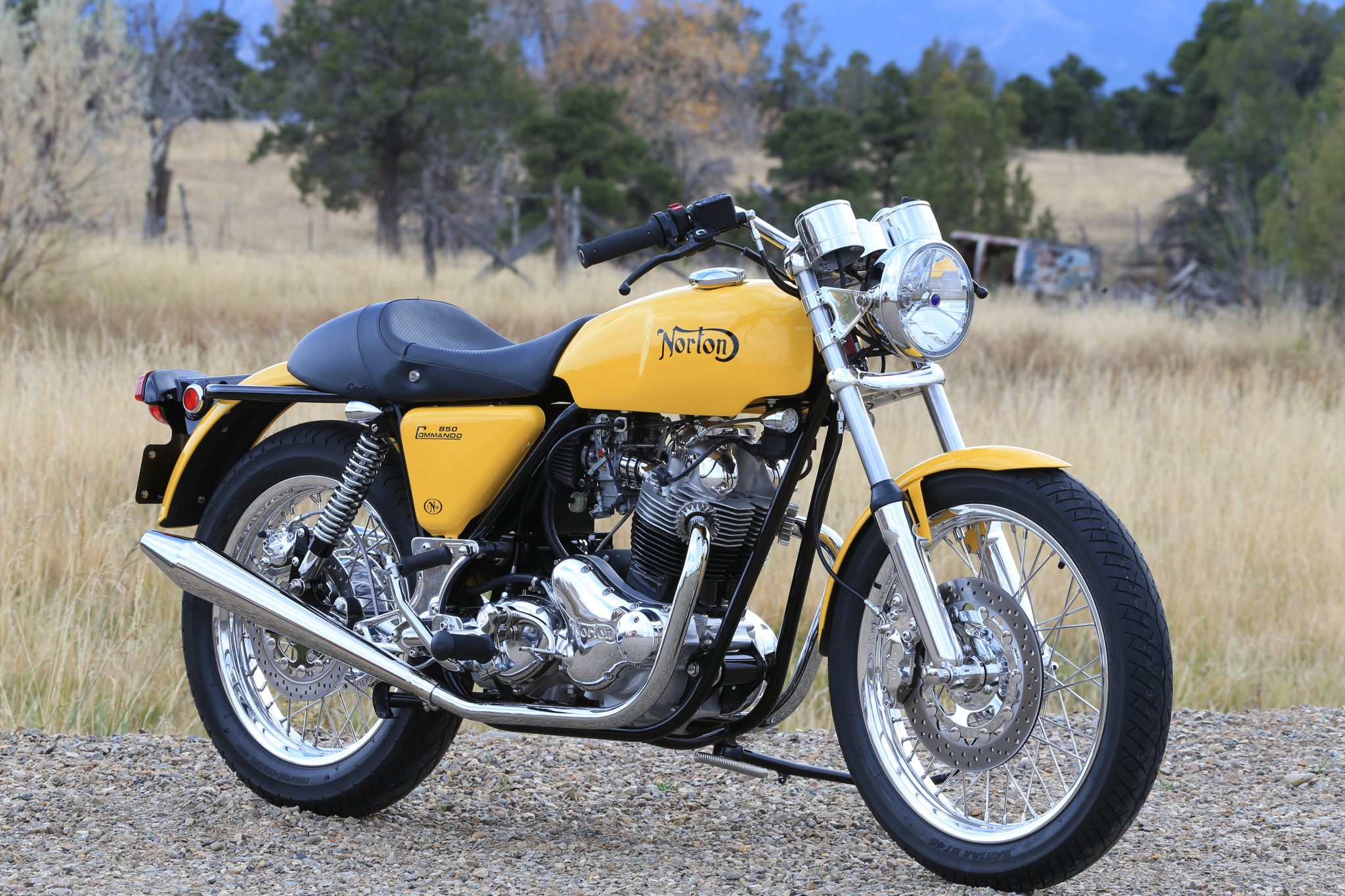