A BSA A65 Rocket – With An Original DMD Streamliner Dustbin Fairing 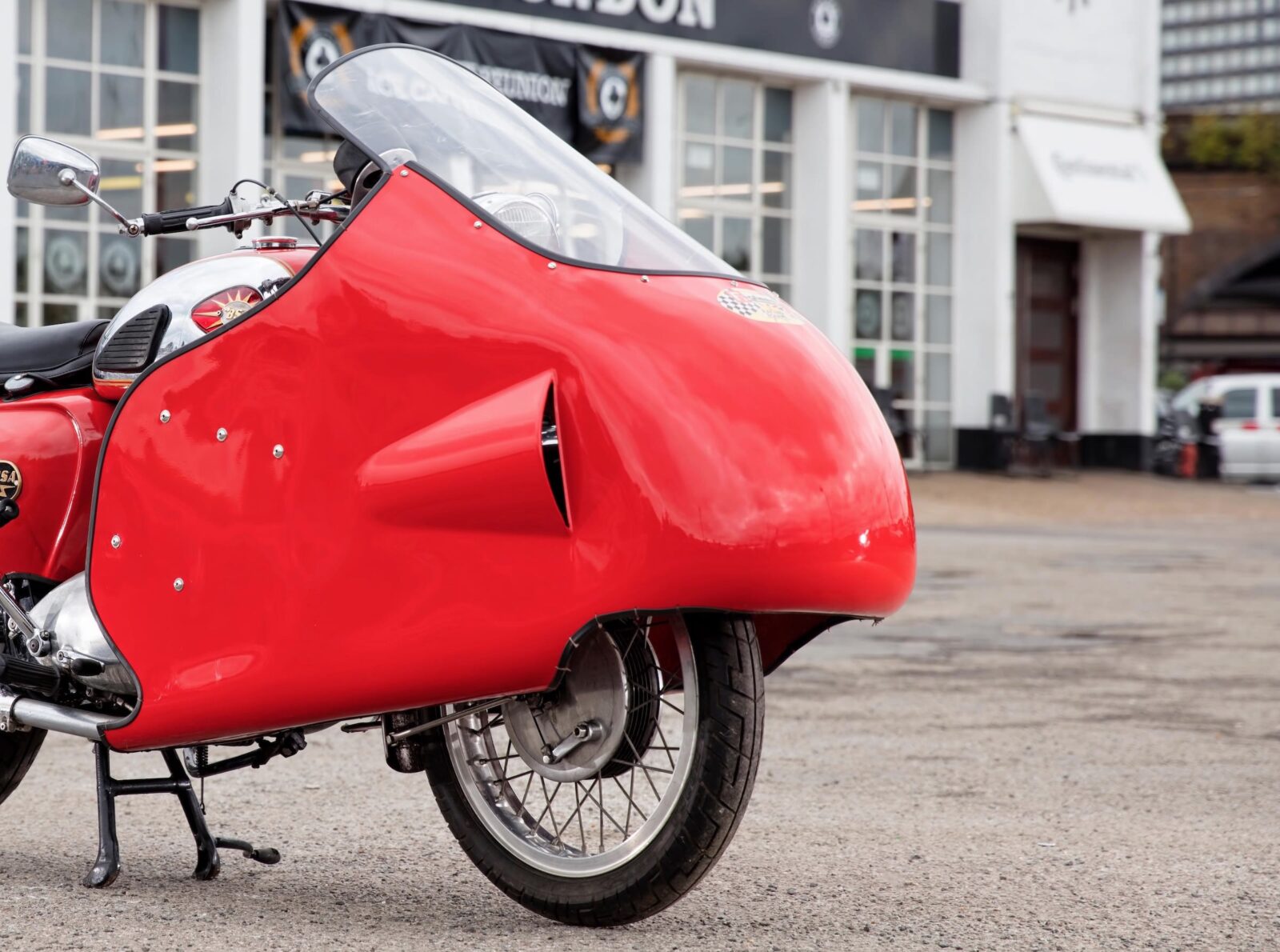 The BSA A65 Rocket was released in 1964 as the new more performance oriented version of the BSA A65 Star.

The BSA A65 series were beautifully designed motorcycles that never matched the sales volume of Triumph or Norton, but they’re a firm favorite with collectors around the world for their good-looks, great handling, and storied history.

The BSA A65 series including the A65 Rocket was developed as the unit-construction replacement for the pre-unit construction BSA A10 series.

For the uninitiated, pre-unit just means that the engine crankcase and gearbox are two separate units bolted into the same frame, whereas unit construction means the gearbox and crankcase share the same casing.

Early motorcycles were largely pre-unit as it was simpler to cast gearbox and engine casings separately at the foundry, and manufacturers could buy in engines and/or gearboxes and pair them up without any major issues. 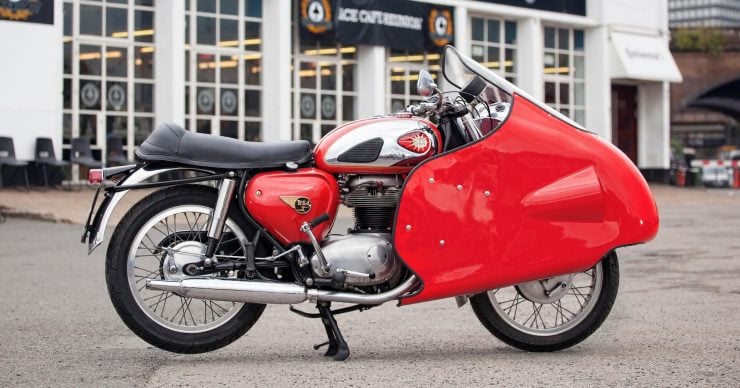 Unit construction is used for essentially all modern motorcycles, it results in a lower total weight, much better rigidity, fewer places to leak oil, and improved simplicity.

The new unit construction BSA A65 Rocket was very specifically designed to appeal to speed-seeking young men (and women) on both sides of the North Atlantic. The engine was a descendant of the parallel twin it was replacing, but the number of interchangeable parts was minimal.

When compared to the slightly lower specification A65 Star the Rocket was fitted with a higher-tuned engine, a heavy-duty clutch, a detachable headlamp for racing, a Siamesed exhaust, rubber fork gaiters, with dress-up parts including chromed upper fork shrouds and mudguards. 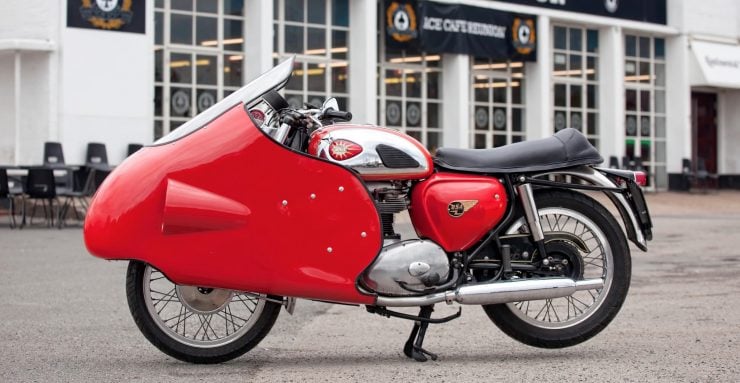 The sleek A65 engine was somewhat hampered by what can only be described as an inept attempt at marketing. The beautiful teardrop shaped timing side of the crankcase inspired the PR department to call this engine “The Power Egg”, it sounded just as silly then as it does now, and it didn’t help sales in any way shape or form.

It’s a shame as once the bugs in the new engine were worked out, it wasn’t a bad motor.

The BSA A65 Rocket would be sold for just two years – 1964 and 1965, before it was replaced by the somewhat similar BSA A65 Lightning.

The A65 Rocket you see here is an unusual example fitted with a period-correct DMD Streamliner dustbin fairing, common on race bikes of the era and used on some sporting street machines too.

The basic idea of the comically named dustbin fairing was to smooth airflow over the front of the bike to reduce aerodynamic drag, and perhaps to add a little front-end downforce too. Most of these fairings have vents or scoops in the side to allow enough air to enter and cool the engine, as well as a Perspex windshield to allow the rider to see when hunched down over the fuel tank on the straights.

The bike is also accompanied by a more common Dolphin fairing which is probably better suited to regular street use. Though the condition appears to be quite good Bonhams do mention that it will need re-commissioning or restoration, and it comes with SORN paperwork, a number of expired MoTs and tax discs, some photographs, and both old and current V5C documents.

If you’d like to read more about the bike or register to bid you can click here to view the listing, the current estimated price is between £2,800 and £3,600. 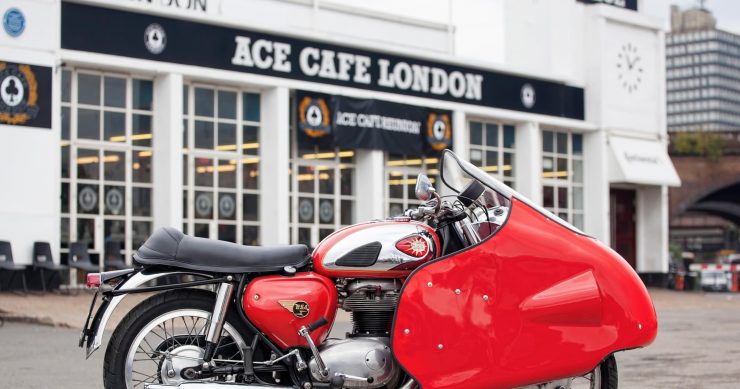 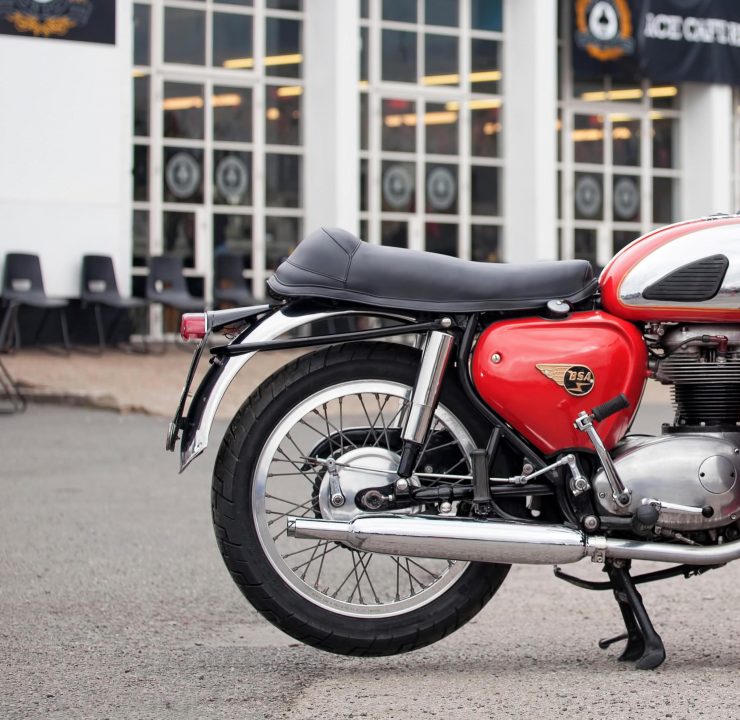 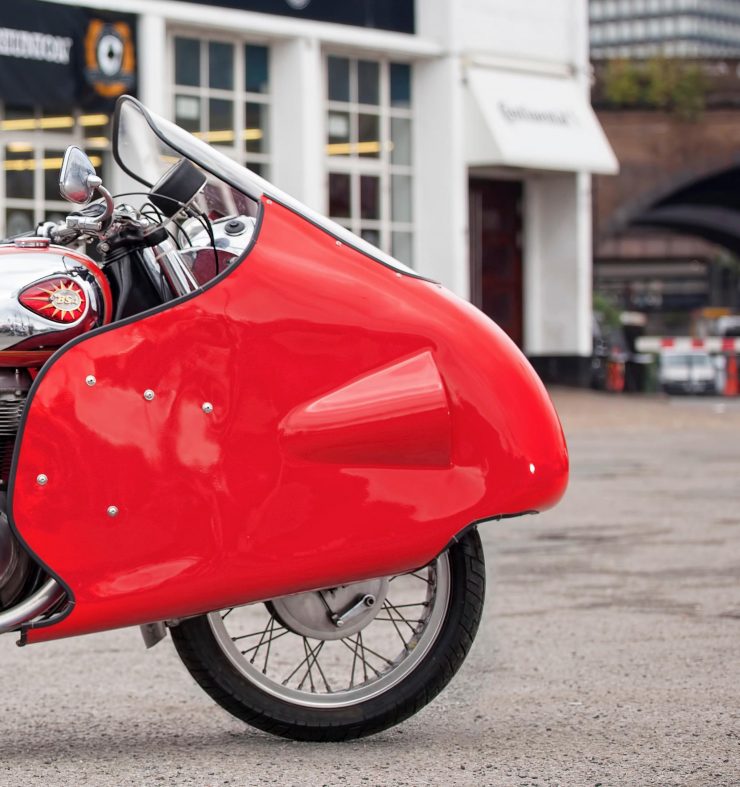 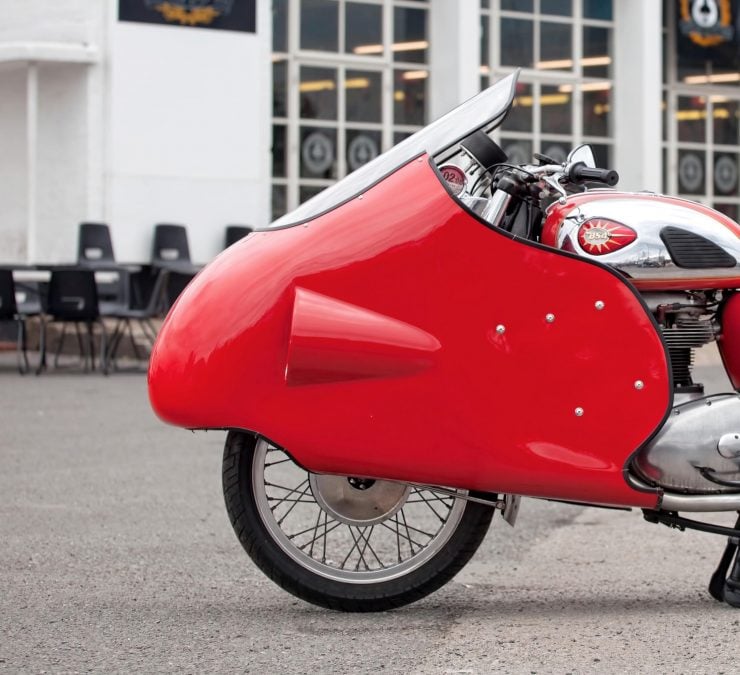 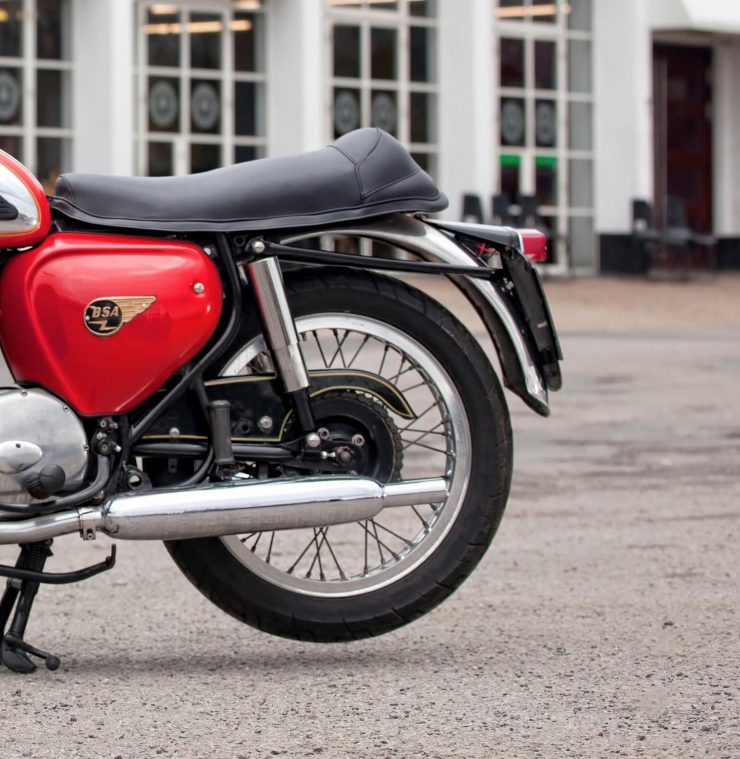 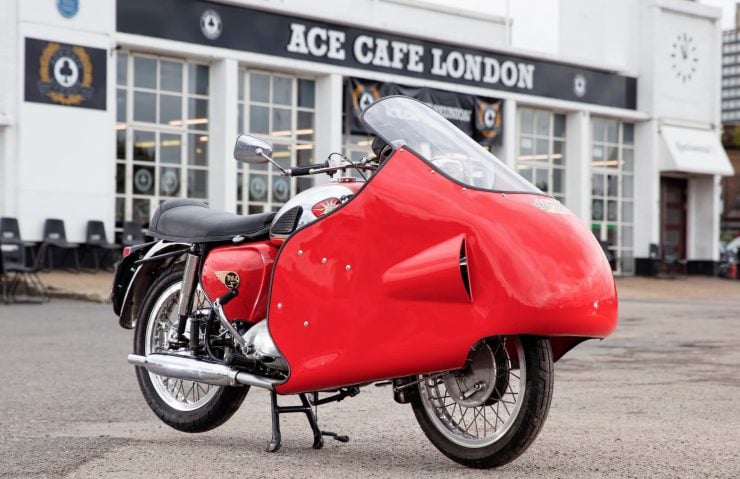 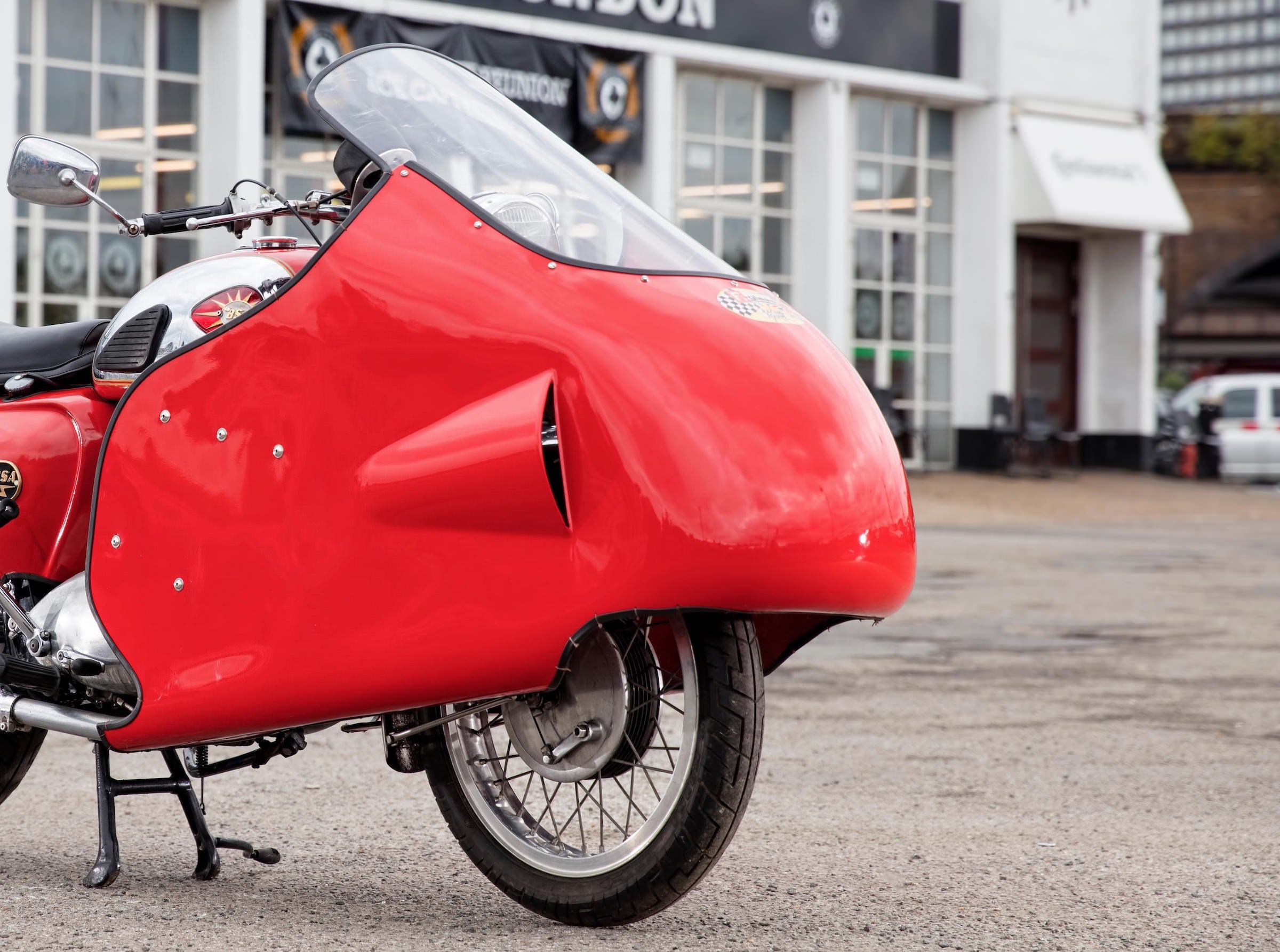