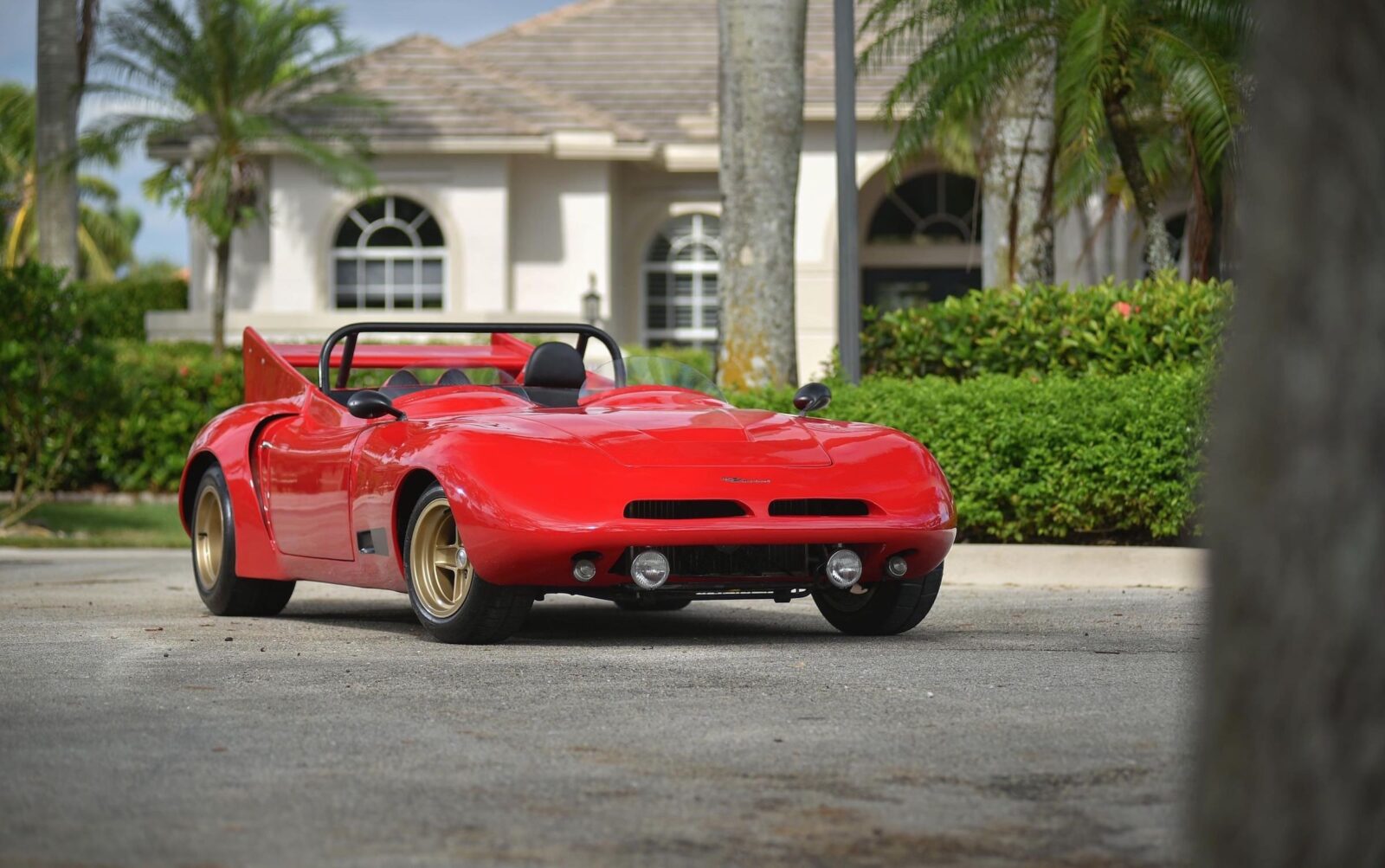 The Bizzarrini 128P was a personal passion project from the man most famous for developing the Ferrari 250 GTO – now by far the most expensive car in the world, and the most sought after by (very) well-heeled collectors. Although the 250 GTO is his most famous work, Bizzarrini developed countless other cars over his long career including less well-known classics like the Iso Grifo and the Bizzarrini 5300 GT Strada.

Giotto Bizzarrini originally trained as an engineer at the University of Pisa before being hired by Alfa Romeo and assigned to the development of the Giulietta chassis. Bizzarrini was immediately impressive, he was transferred to the Experimental Department and became a test driver. When applying his natural engineering abilities to new chassis he made a significant impact, and people outside Alfa Romeo began to notice. 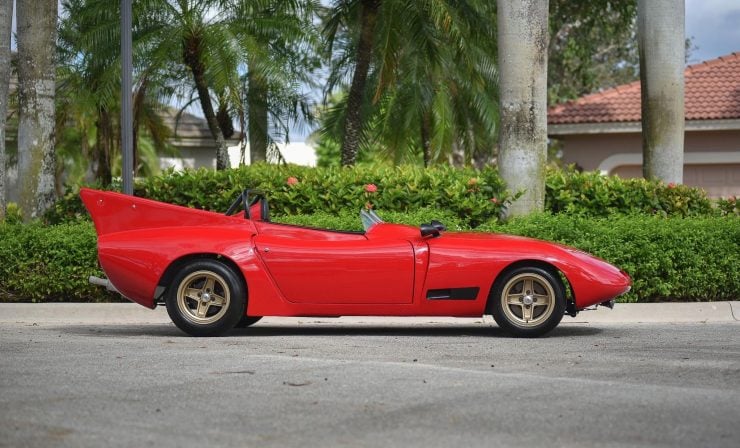 One of those people was Enzo Ferrari who headhunted Giotto in 1957 to work on his own racing cars. While at Ferrari he worked on the Ferrari 250 GT 2+2 (GTE), the Testa Rossa V12 engine, the 250 TR Testa Rossa, the 250GT SWB, and of course, the 250 GTO. Internal politics resulted in Giotto leaving Ferrari in 1961.

Bizzarrini would co-found Automobili Turismo e Sport (ATS) and work on developing sports cars and Formula 1 cars, he would also have a significant hand in the development of the Lamborghini V12 – an engine that would cause his former boss significant headaches in the years to come. He experimented with starting his own car company in 1965, famously creating the legendary Bizzarrini 5300 GT Strada, however life is hard for low-volume automakers and the company ceased operations before the end of the ’60s.

By the early 1970s Bizzarrini was back at the University of Pisa to train a new generation of engineers. It would be over this time that he would develop some of his most remarkable and least well known designs – including the Bizzarrini 128P and the AMX/3. 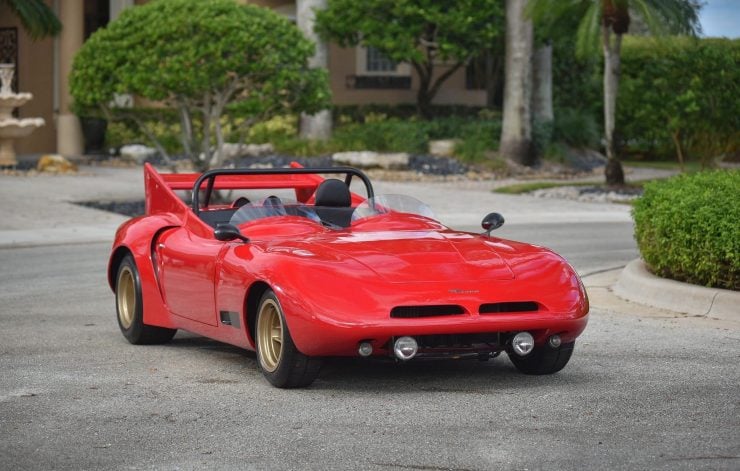 The Bizzarrini 128P was developed 100% in-house, the eye-catching styling was penned by Bizzarrini and both the chassis and body were fabricated under his direct supervision. This was a personal project for Giotto, he wanted to race in the 1973 Targa Florio, and he wanted to do it in a car he developed himself.

The plan was to fit a Fiat 1.3 litre inline 4-cylinder engine in a rear-mid-engine configuration fed by a pair of side-draft Weber carburetors and capable of 130 bhp. Power is sent to the rear wheels via a Colotti T46B VW-derived transaxle and the chassis is a tubular space frame with an 87 inch wheelbase.

The fibreglass body incorporated many of the lessons Bizzarrini had learned developing the Ferrari 250 GTO, including a low nose, a semi-Kammback rear, and a body that’s as smooth as possible from tip to tail. A large rear wing was added to stop the rear from getting light at higher speeds, and a pair of Perspex windshields help to keep the air out of the faces of the occupants. 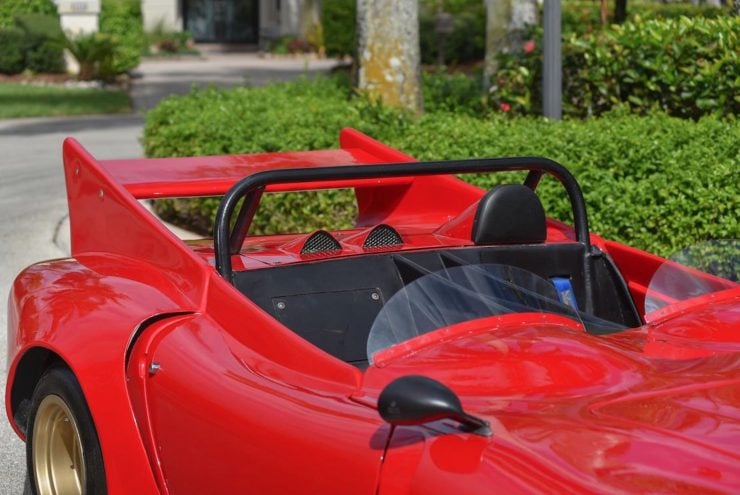 A pair of subtle vents are shaped into the body just behind the doors to feed fresh air to the engine and cooling system, and a black roll bar is fitted for safety.

Just two examples of the Bizzarrini 128P were ever built, a prototype and a race car. Sadly the race car was was crashed at the Targa Florio (later repaired) and the prototype (shown here) had the body removed and the chassis repurposed. The fibreglass body would spend years sitting behind Bizzarrini’s facility in the weeds before being rescued in the 1990s and fitted to a correct chassis with a correct powertrain.

Since its restoration the car has been the subject of a number of magazine articles, and in 2017 at the International Concours at Amelia Island it won the Camille Jenatzy prize for the “Most Audacious Exterior”

The unusual Bizzarrini 128P is now due to cross the auction block with Bonhams on the 7th of February with an estimated hammer price of between €175,000 and €225,000. If you’d like to read more about it or register to bid you can click here. 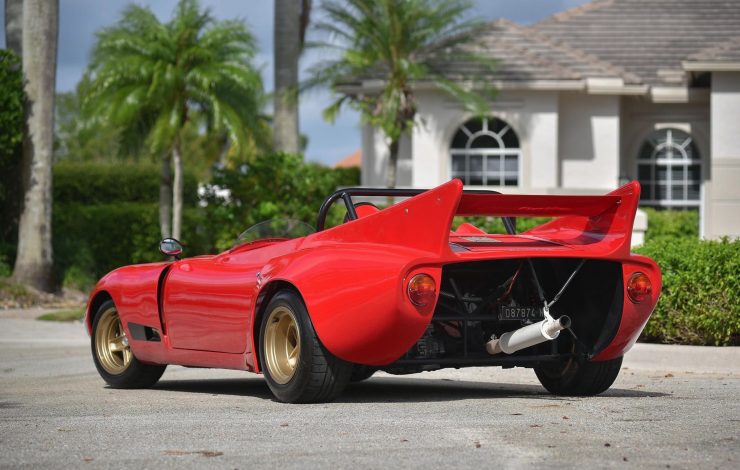 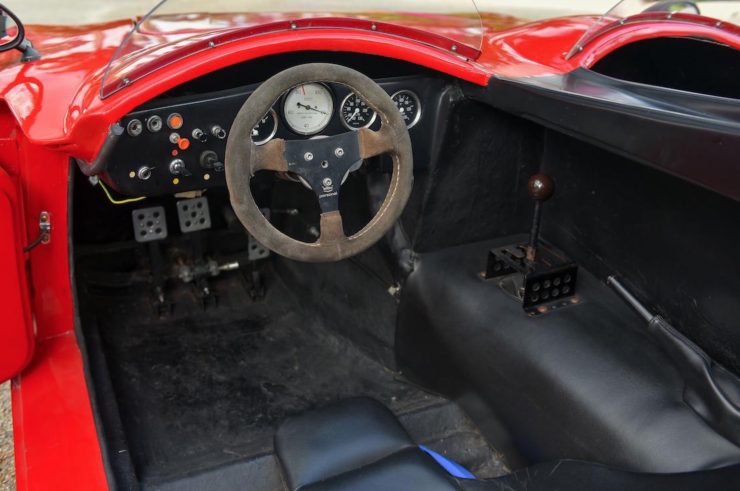 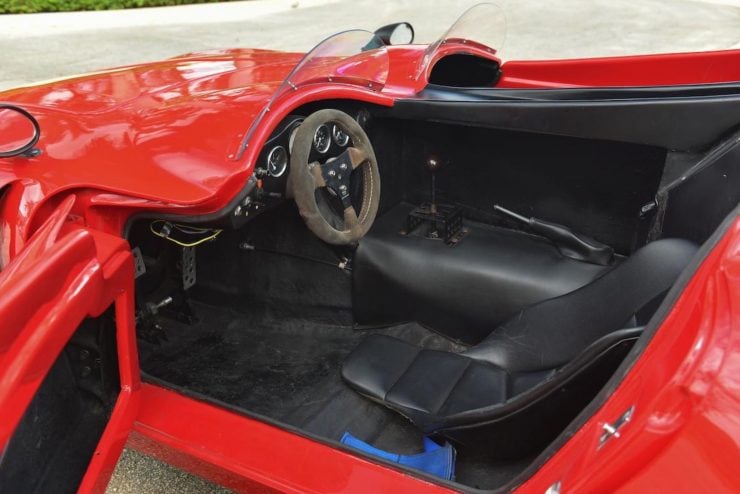 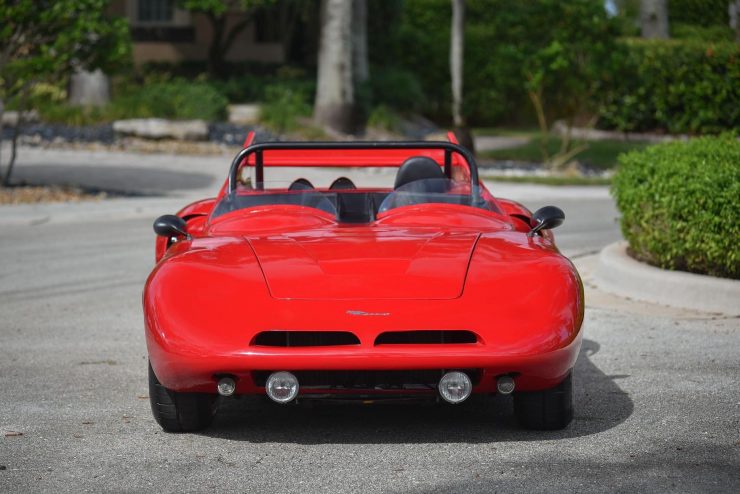 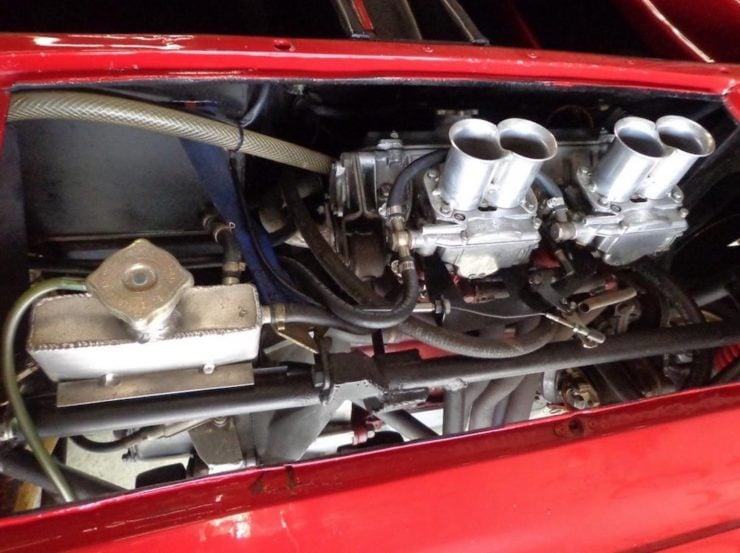 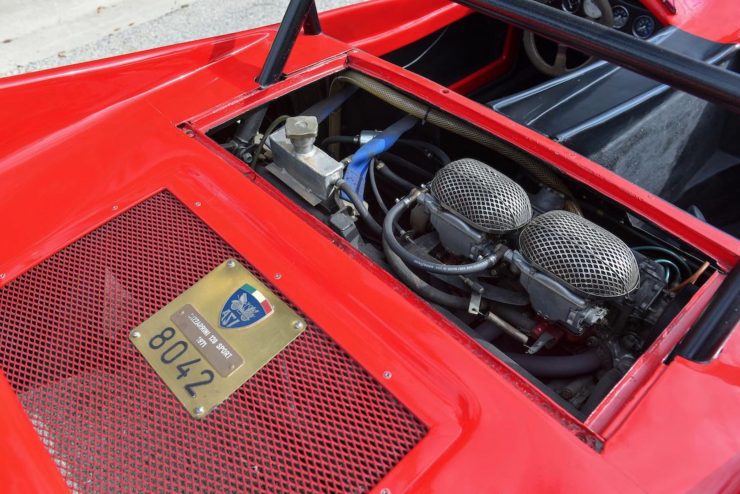 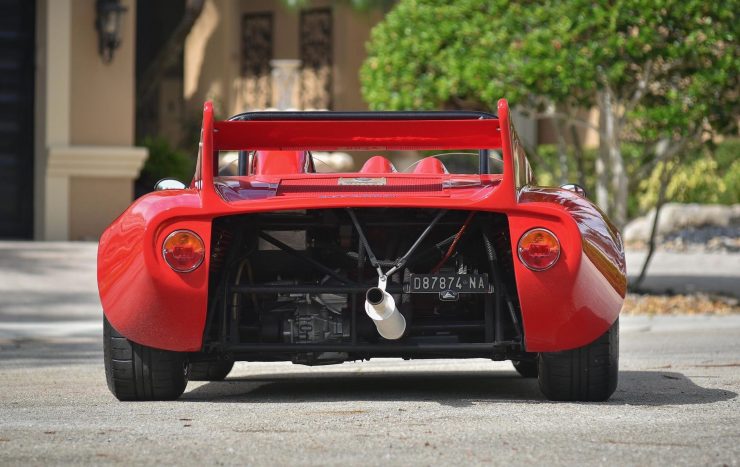 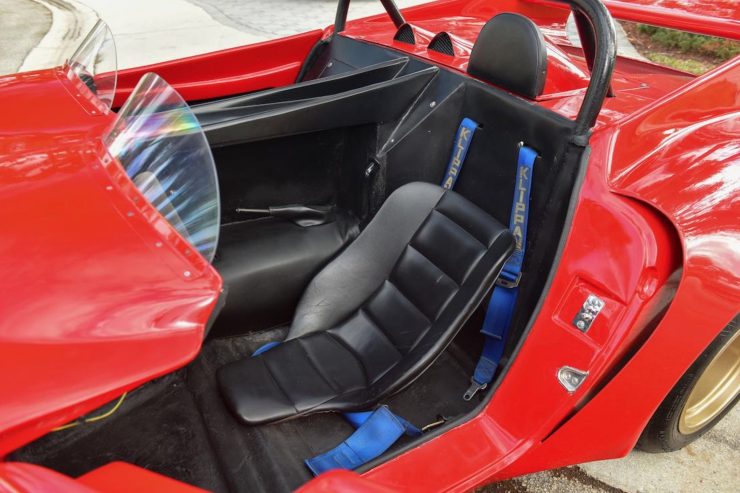 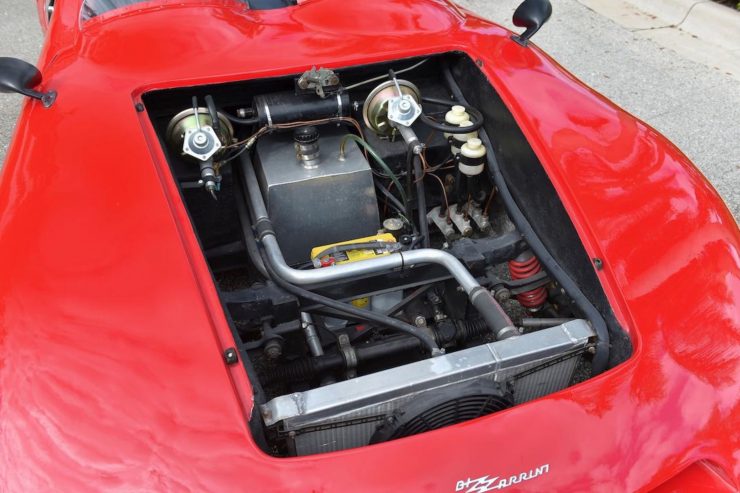 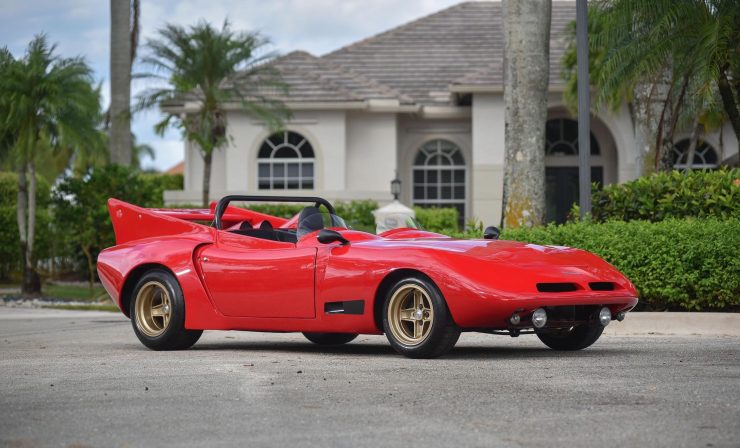 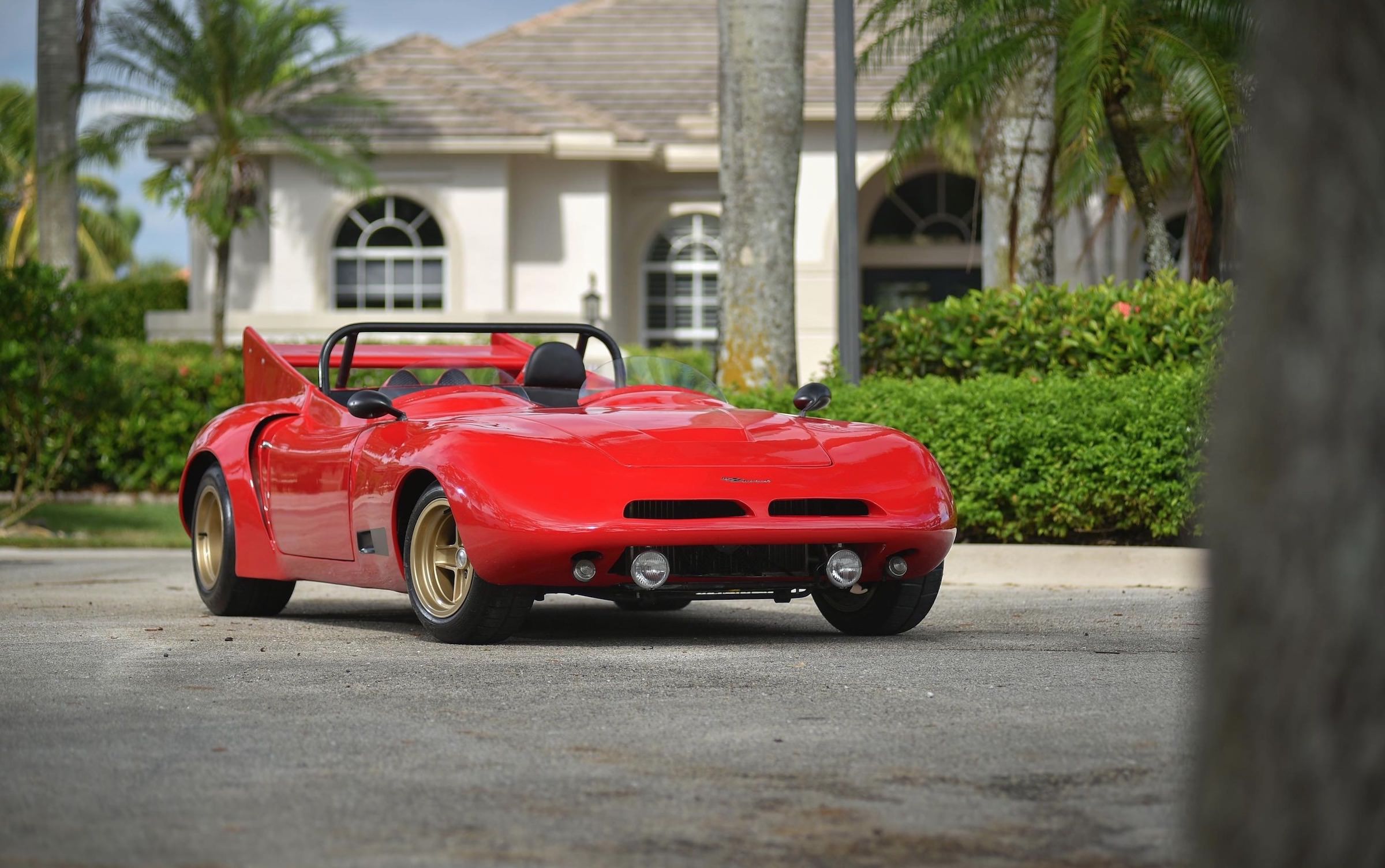