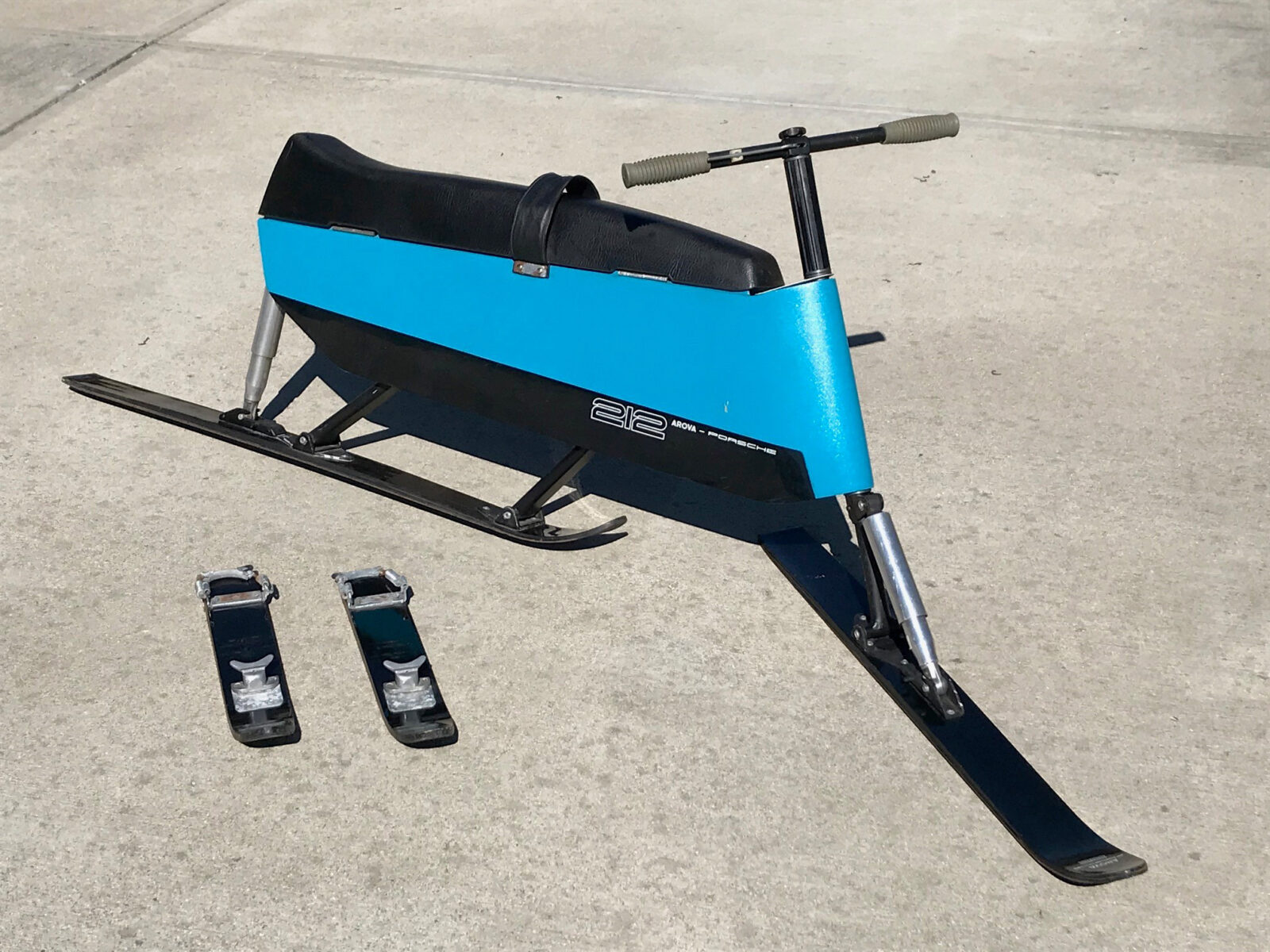 This is an original Arova-Porsche 212 Skibob, for the uninitiated it’s essentially a bike with skis instead of wheels that you can use as an alternative to skiing or snowboarding.

Skibobs never really caught on in the same way as the more popular Alpine pursuits, but there is a loyal following around the world – with the FISB (Fédération Internationále de Skibob) organizing an annual Skibobbing World Championship since 1967.

There are two main types of skibob: type 1 and type 2. Type 1 has no suspension, and type 2 typically has rear suspension. The Arova-Porsche 212 Skibob you see here is a type 2 skibob due to the fitment of its rear shock absorber.

Both skibob types have proven popular with people who may not have the leg strength to ski, as well as with people who have suffered knee damage in the past or other leg injuries. That said, skibobbing is anything but a slow and gentle sport – in top flight competition skibobbers can reach speeds of over 120 mph (190 km/h). 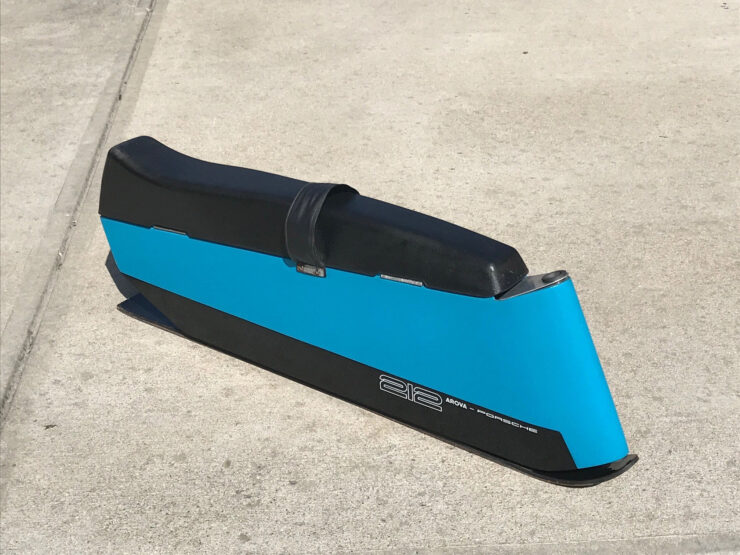 Above Image: All of the parts of the Arova-Porsche 212 Skibob can be disassembled and then placed neatly into the body of the vehicle under the seat for easy transport.

The Arova-Porsche 212 Skibob was a collaborative effort between Arova, an established skibob maker and Porsche. The design was done by Porsche, and unusually for a skibob the 212 has front and rear shock strut suspension, and seating for two adults.

Porsche designed the 212 with a hollow body that can hold a thermos and a sandwich for a day on the slopes. When you pack it up the feet, suspension, handlebars, and steering shaft for transportation all the parts fit neatly into the body, allowing the 212 to fit into the front trunk of a 911.

With a total weight of approximately 14 kilograms the 212 is heavier than most skibobs, it has a body made from molded polyfoam, and aluminum struts with fibreglass feet.

It also comes with two adjustable foot skis to use for stabilization, you simply mount them to your boots and you’re good to go.

The Porsche skibob you see here is due to cross the auction block with RM Sotheby’s in mid-to-late March, it’s being offered without reserve and you can click here to visit the listing. 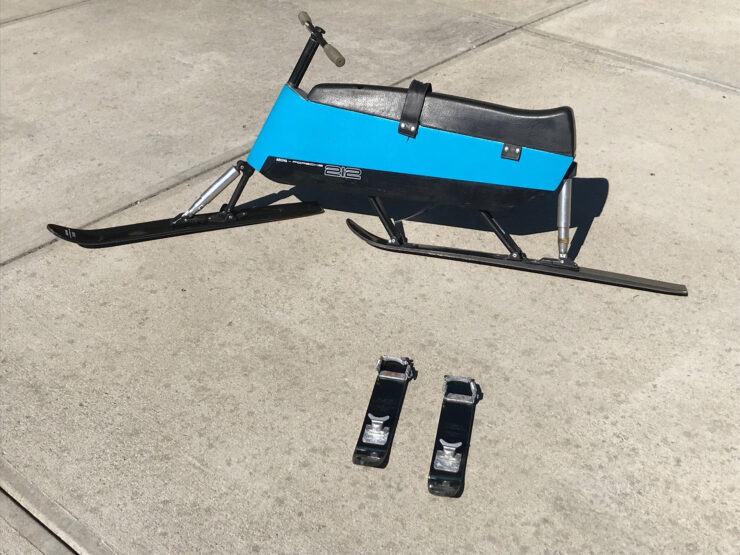 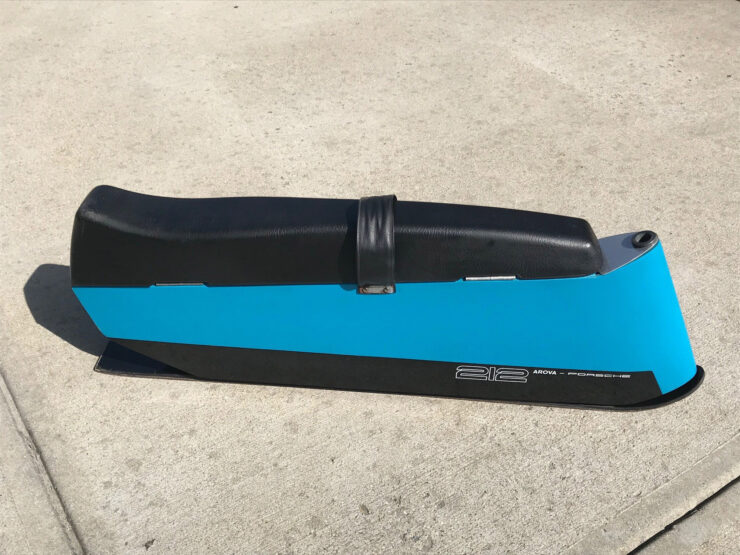 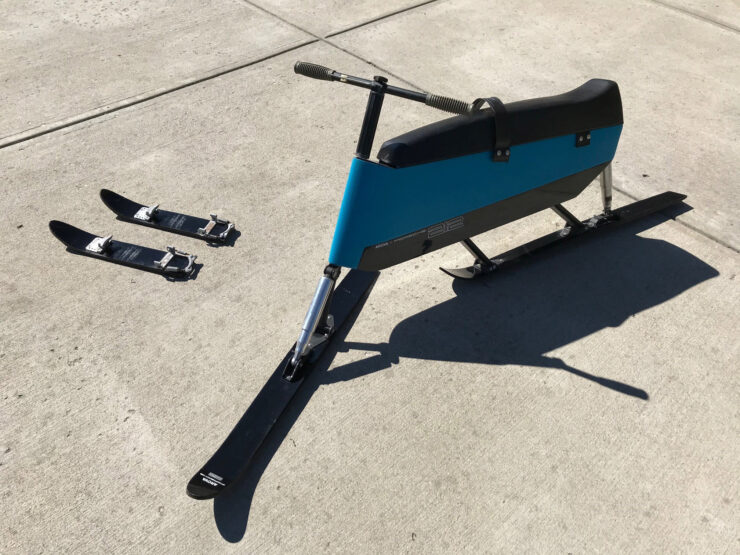