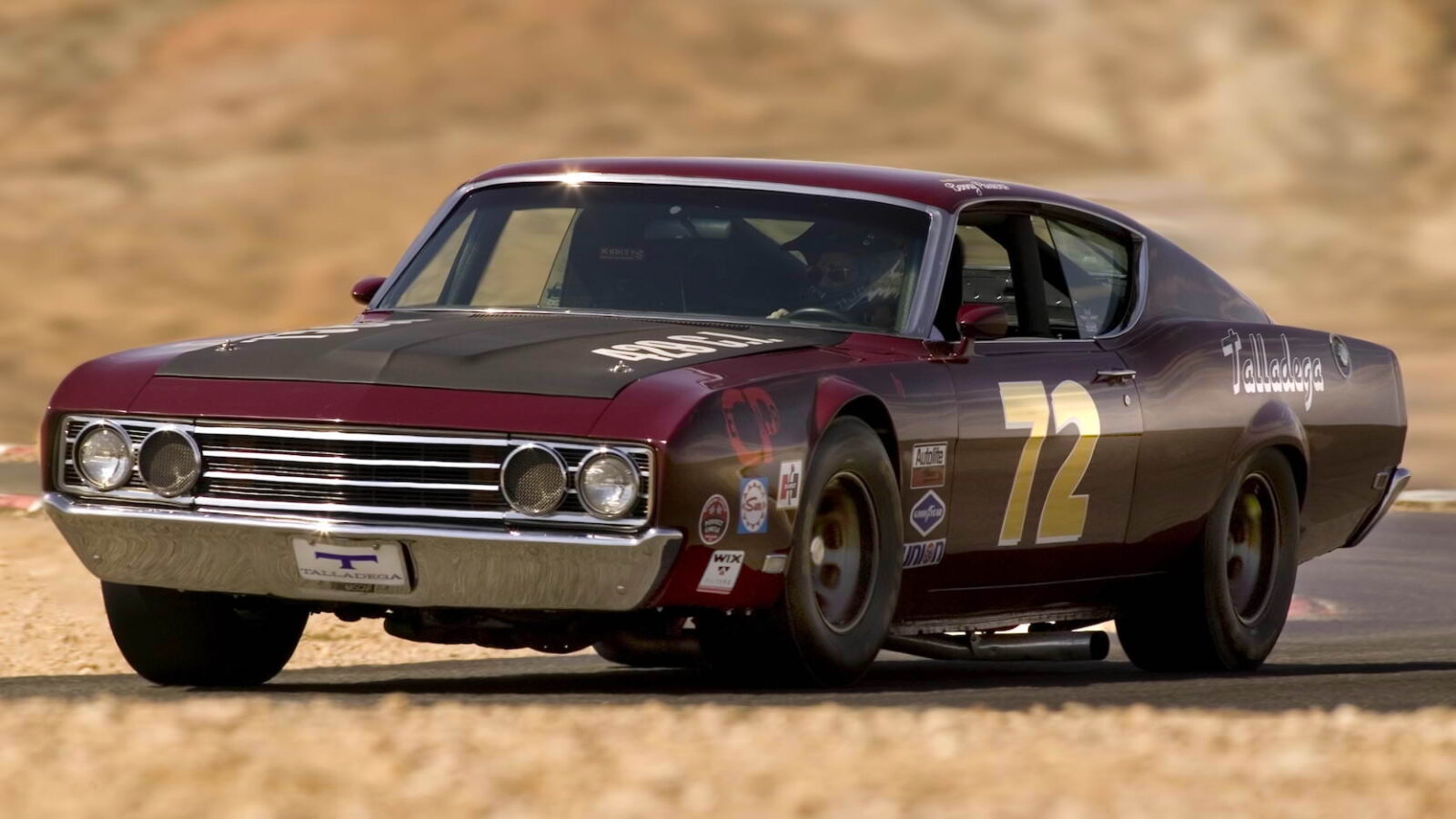 This is one of just 750 or so factory-built 1969 Ford Torino Talladegas ever made. The cars were only built for a few weeks over January and February 1969, and they were said to have been built by the highly-experienced hands of the Holman-Moody mechanics, not the regular Ford assembly line workers.

The Torino Talladega was one of Ford’s major evolutionary steps forward in NASCAR design, though much (if not all) of the credit for its design and performance should probably be laid at the feet of the experienced race car builders over at Holman-Moody.

In order to take Ford’s performance (and results) in NASCAR up a notch, Ralph Moody worked with Ford engineers to create a modified version of the Torino body. The men were working to lower drag as much as possible, a new lower front end was created for the car that was six inches longer and new front fenders were handmade by the team at Holman-Moody to match. 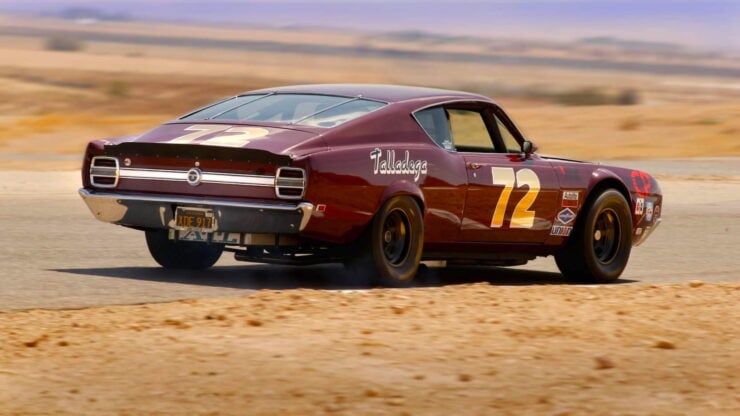 The Torino Talladega featured a longer, lower nose than the regular production Torino – designed to improve aerodynamics and increase the top speed.

The stock bumpers were discarded in favor of new low profile bumpers that were fabricated by modifying Ford Fairlane rear bumpers to fit.

The most famous, and by far the most cheeky, alteration made to the cars was the modification of the rocker panels. In NASCAR all vehicles had a minimum height requirement for safety, to stop cars running too low. This height was measured from the bottom of the rocker panel (the sill) to the asphalt, so the team at Holman-Moody modified them to be one inch higher. This allowed the suspension to be lowered by the same amount, improving the center of gravity and subsequently improving handling.

In order to meet NASCAR homologation requirements, Ford had to build 500 street-legal examples of any car they wanted to race, and 100 of these need to be built before the car can start competing. Automakers have spent decades finding ways around homologation requirements and this car would be no different. Ford would actually exceed the 500 unit requirement by over 50% but at the beginning of the year they were lagging far behind the 100 they needed built to start competing, as related by Ralph Moody below:

“So we brought Big Bill into this long warehouse at the Ford plant, gave him a comfortable chair, and told him that we would have the Torinos driven past him, and he could count them one at a time. Well, Ford had only built about 40 of the street versions at the time, so we had the cars driven past France, out the door, around the building and back again. He didn’t know it, but he counted the same cars three times.” – Ralph Moody in Holman Moody: The Legendary Race Team.

By the time road car production was completed the 500 unit homologation minimum had been far exceeded. Ford had produced nine prototypes, five pilot cars, and 736 homologation production cars, all of which are now worth a king’s ransom due to their historic significance and rarity. 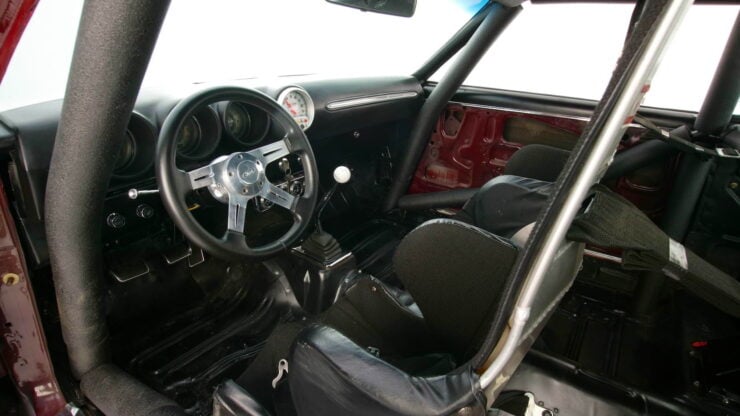 This car is street legal but it remains ready to race, with a full six-point roll cage and racing seats.

The appearance of this new Ford was enough to bring arguably the greatest NASCAR driver of all time over to the blue oval – Richard Petty signed with the company for the 1969 season. He eventually came second and Ford won the Manufacturer’s Cup – taking first, second, and fourth place when the season drew to a close.

The production-examples of the 1969 Ford Torino Talladega were built to essentially the same specifications with a few minor differences. The cars were almost all fitted with the Ford 428 Cobra Jet, a 428 cubic inch (7.0 liter) V8 which sent power back through a column-shift C6 auto transmission.

The Cobra Jet featured a 10.6:1 compression ratio, and it was equipped with a cast-iron crankshaft, high-strength connecting rods, and it used a 735 CFM Holley four-barrel carburetor.

The interior was finished in black vinyl with a cloth insert bench seat interior with no tachometer and no clock. There was no radio fitted as standard – it was the only additional option offered from the factory.

The back end of the car sat on a 31-spline 3.25 open rear with staggered shock absorbers, and the car was fitted with styled steel wheels. Just three color options were offered, Royal Maroon, Wimbledon White, and Presidential Blue. 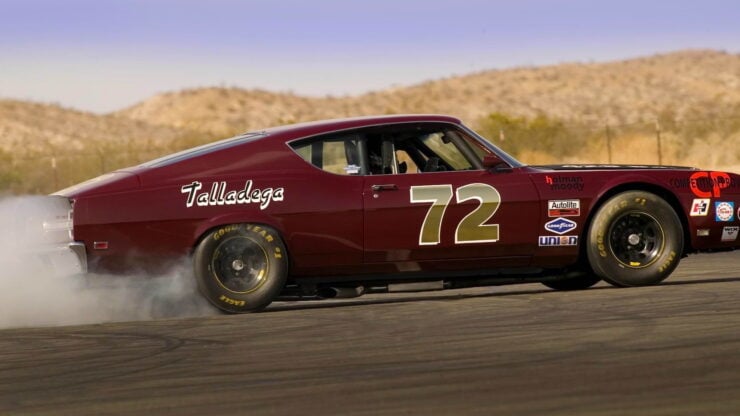 The biggest issue faced by anyone driving the car is getting the 870 hp down to the ground without burning the tires down to the steel belts.

The amount of power produced by the car is a hotly debated topic, the factory claimed that the car made 335 hp, however it was commonplace to under-report power figures to keep insurance companies and government regulators happy. It’s believed that the cars were really making at least 400 hp, probably somewhere in the 450 hp range.

The car you see here is a significantly modified version of the Torino Talladega, now producing a dyno-tested 870 hp which is well over double what the car originally produced and close to triple what the factory originally claimed in 1969.

Interestingly, this Talledega remains street legal and ready to race. It’s fitted with a full six-point roll cage and racing seats and it’s been on many iconic tracks including the Talladega Superspeedway, Atlanta Motor Speedway, Willow Springs Raceway, Milwaukee Mile Speedway, St. Louis Gateway Speedway and it was part of the Official NASCAR Parade lap at Talladega.

The car is now equipped with a magnesium intake manifold, magnesium valve covers (the set from David Pearson’s race car), a magnesium dry sump oil pan, and the engine has a slew of unspecified modifications to bring it up to its current power level.

If you’d like to read more about this car or register to bid you can click here to visit the listing on Mecum. It’s due to roll across the auction block in early October and at the time of writing there’s no price estimate listed. 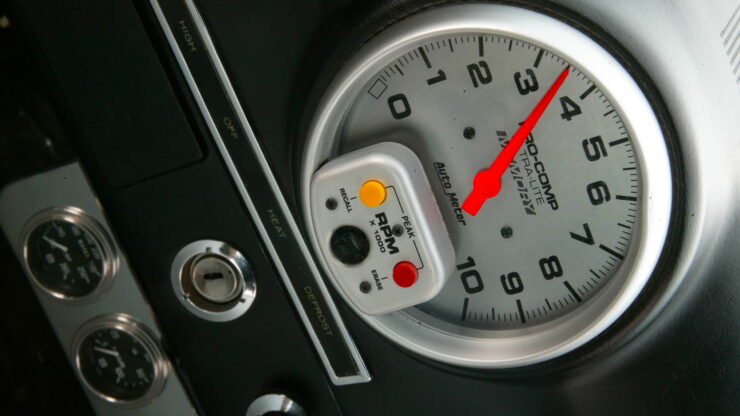 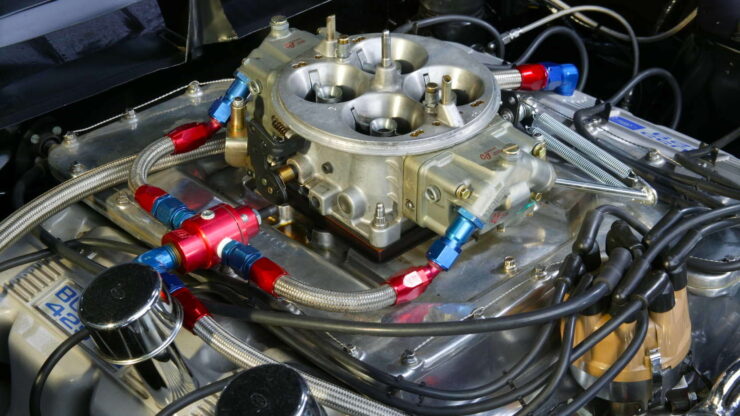 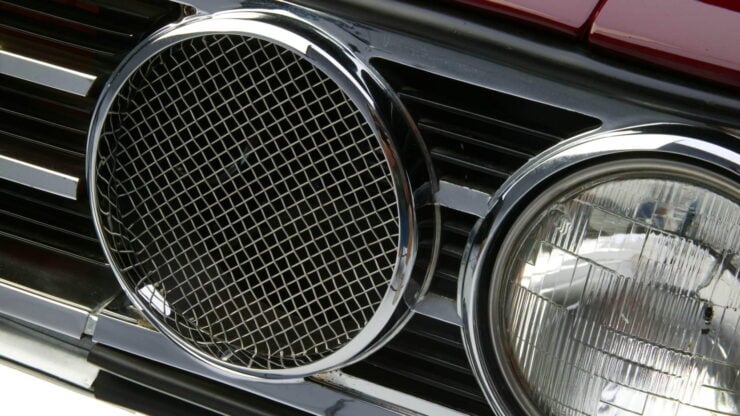 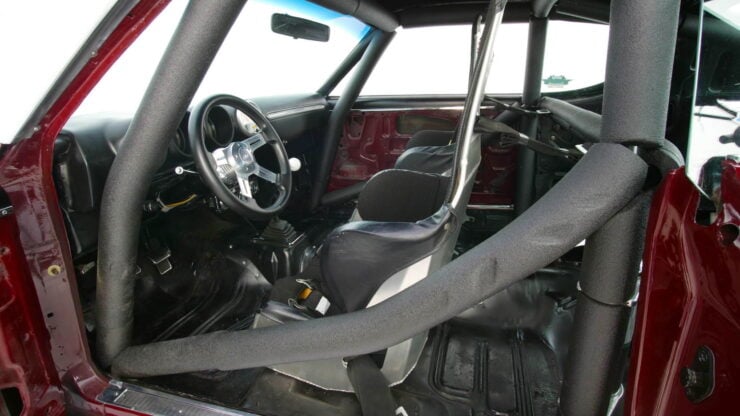 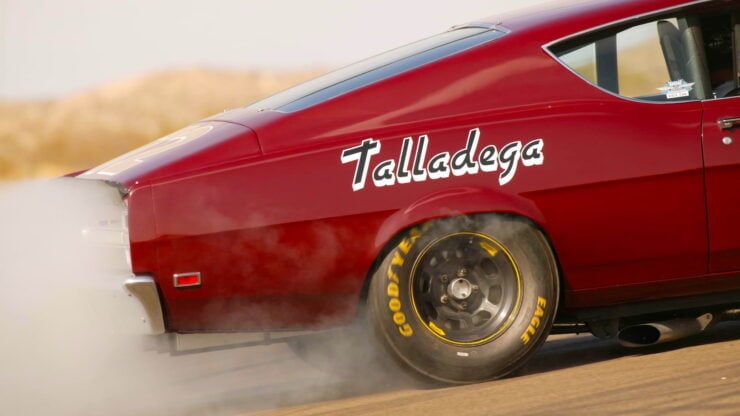 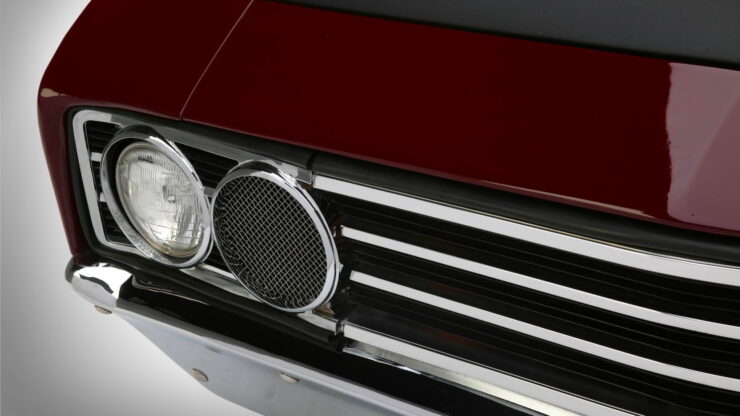 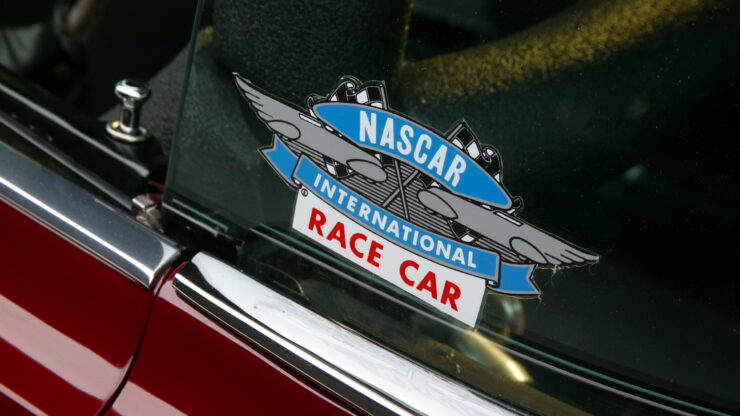 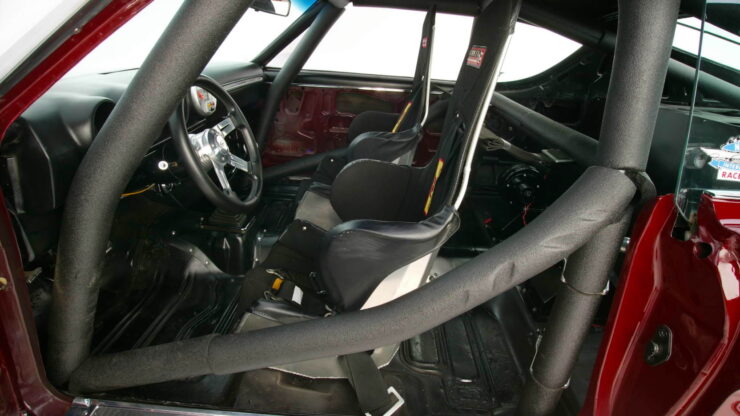 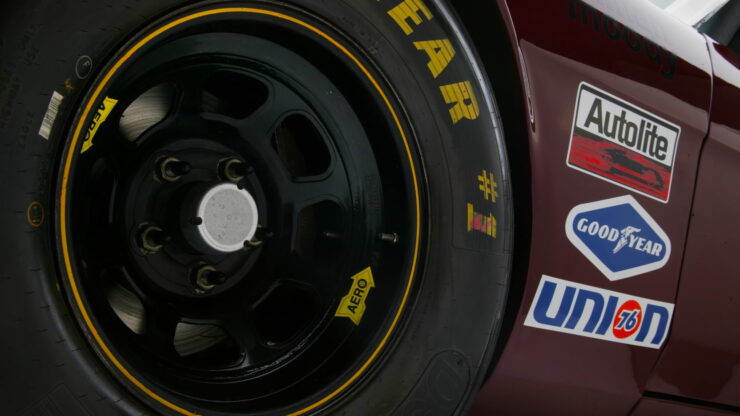 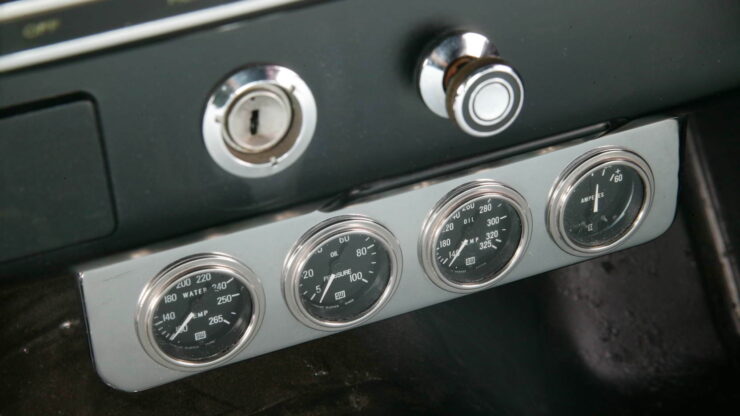