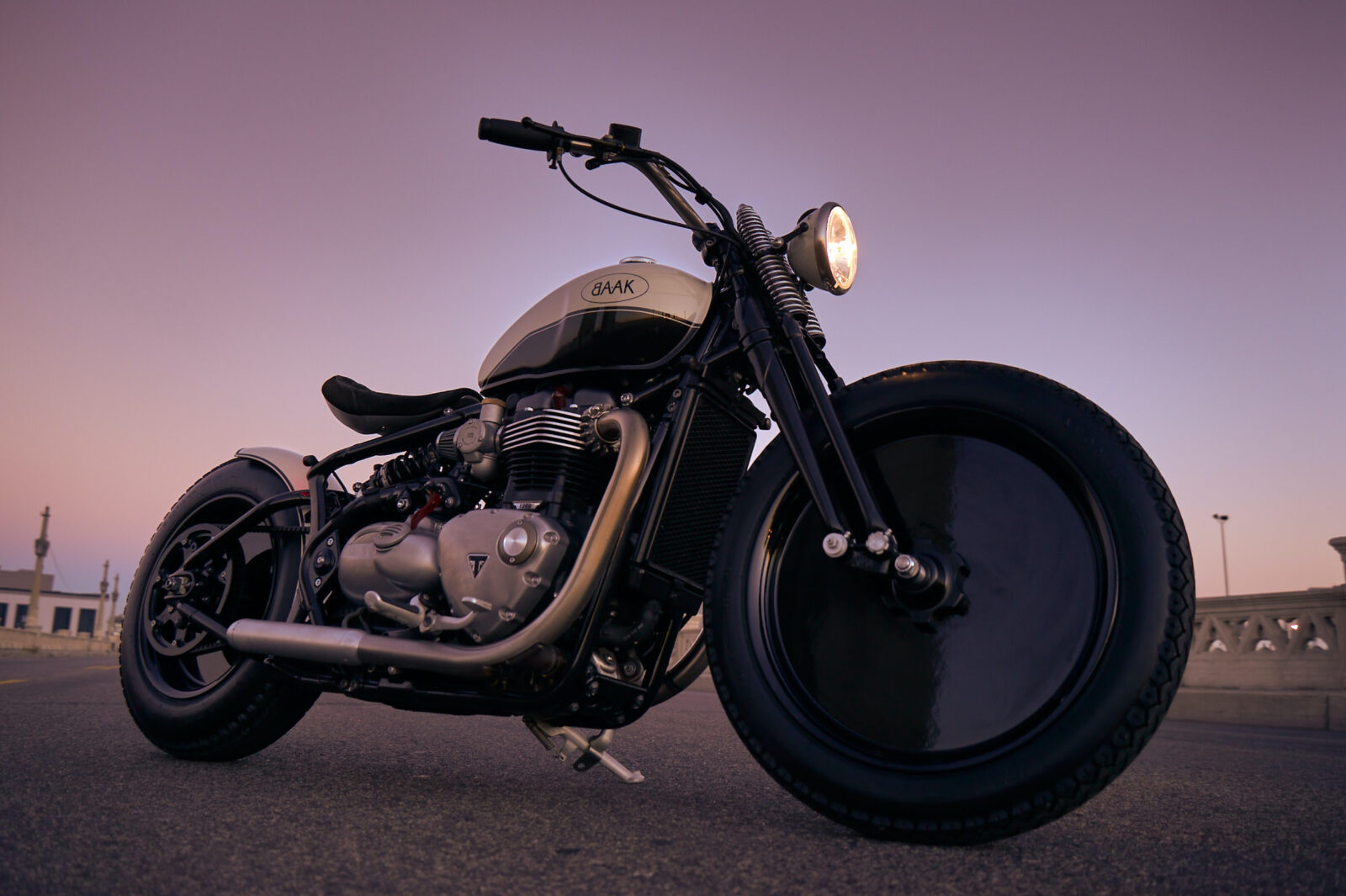 This is the Baak Moon, it’s a comprehensively rebuilt Triumph Bobber created by the European company’s new American base of operations. As a result it features a slew of WWII-era American design choices – like that classic springer front end.

Bobbers like this were the bread and butter of the American motorcycle world in the years after the Second World War. Many were built from ex-military bikes like the Harley-Davison WLA, and many were ridden by former soldiers who were struggling to reintegrate into society.

When it was first shown to the public in 2016 before its release in 2017, it was clear that the Triumph Bobber was going to be a popular target for custom motorcycle builders. 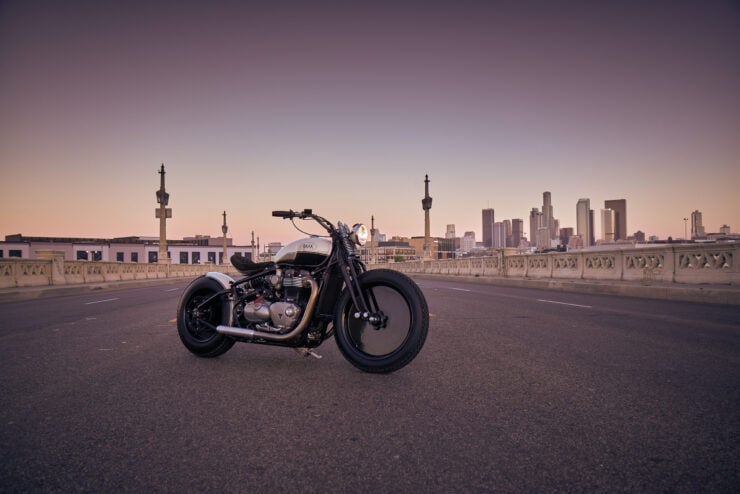 This Bobber uses mid-century design queues to create a modern version of what many custom motorcycle builders were riding in the USA back in the 1940s and 1950s.

Much like the Sportster, its long-running contemporary from Harley-Davidson, the Bobber was built with an eye to making sure it had a modular design well-suited to allowing owners to get the tools out and make it their own.

The core architecture of the Triumph Bobber is relatively straightforward, it uses a tubular steel frame with a swing arm rear and it has telescopic forks up front. The engine is a 1200cc parallel twin with a single overhead cam powering four valves per cylinder, it has a 10.0:1 compression ratio, and a 270° crank angle.

When Baak Motocyclettes was founded in Lyon, France back in 2012 they brought their own unique savoir faire to the custom motorcycle building world. In the years since they’ve built over 150 custom bikes followed by slew of custom cars including a Porsche 911, a Mini Cooper, and a Land Rover Defender.

Rather than just building custom motorcycles Baak has developed a line of parts and apparel which are available for order globally. In 2020 Baak opened a new garage in California and the Bobber you see here is the latest build from the New World side of the business. 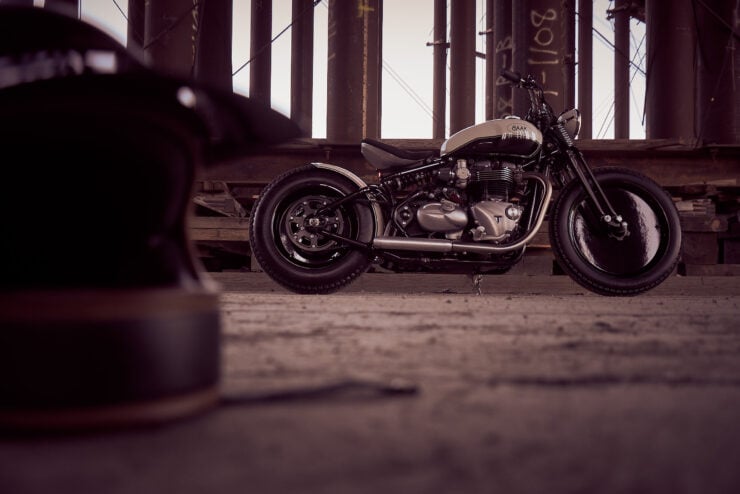 The bike is named for its Moon Disc wheels, finished in black they’re metal discs that fit over the top of a regular spoked wheel.

They decided to name this bike the Baak Moon as a reference to its wheels which are fitted with classic black Moon Discs. I’m going to turn it over to the team at Baak now to tell you the story of this build in their own words:

“This bike was build primarily as a showroom bike. We wanted to show what we can do and our vision of the Triumph Bobber. Part of our inspiration comes from a very rich part of the motorcycle history, pre-WWII the AMA (American Motorcyclist Association) created Class C racing to make competing easier and more accessible.”

“The bikes of that generation were given a “Bob Job” to reduce their weight and improve their performance. Although Triumph motorcycles didn’t take part in class C racing in the 1930s, their bikes were extensively bobbed by American riders starting towards the end of the 1940s, in the same way as their Class C American cousins, by US servicemen that came back home after the war with improved mechanical skills and a newly found passion for English bikes.”

“We ultimately wanted pay tribute to this part of the motorcycle history while integrating modern touches.”

“Once the bike was on the lift we basically stripped it down to only keep the frame, engine, wiring harness, swing arm rear brake system. For this build we’ve selected parts with a strong identity such as the springer fork or the solid wheels wrapped in Avon Safety Mileage MkII tires, as well as a complete assortment of our BAAK signature parts.” 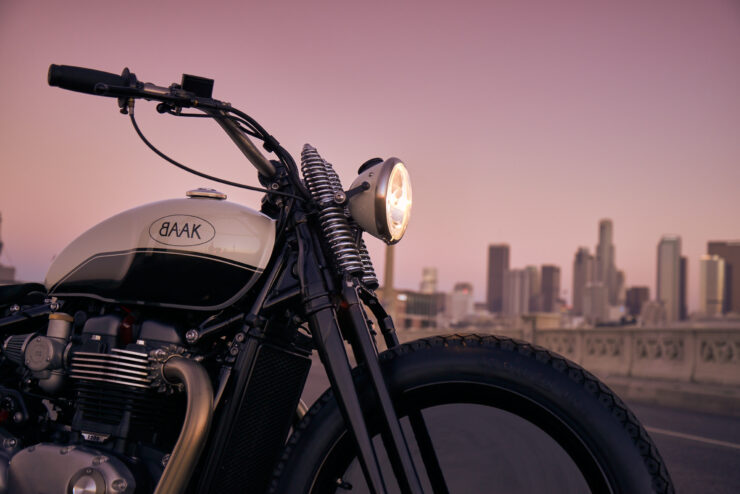 The most distinctive feature is the springer fork front end, this was a common form of front suspension on American motorcycles for decades, and it’s still popular with custom bike builders today.

“As often with our builds we’ve swapped out the bulky factory gauges and fitted a new headlight with an integrated Motogadget Tiny gauge, our classical BAAK N˚1 handlebar, a set of aluminum controls (designed and produced in house like a large part of our catalog) and black levers, the factory mufflers were replaced by a pair aluminum mufflers with our iconic design and of course the seat has been wrapped in a very nice black suede leather. The same material is used on the airbox delete cover.”

“The bulky and long factory rear mudguard was also replaced by a shorter tire hugging fender revealing the beautiful thread pattern of the MkII tires and the license plate holder find its place on the left side of the swing arm.”

“The beautiful paint job designed in our Lyon HQ and executed by our painter in Los Angeles, the talented Carlos Molina and it finishes the bike perfectly and brings that vintage look we were after. We chose a very specific shade of ivory from an old Porsche 356 paint catalog complimented by a light coat of metallic to make the bike radiant.”

“This bike is surprisingly fun and easy to ride once you’ve become used to the way the springer fork operates. After a trip up and down the U.S. Route 1 between Los Angeles and Monterrey through the beautiful twistys of Big Sur, the verdict is “excellent.” 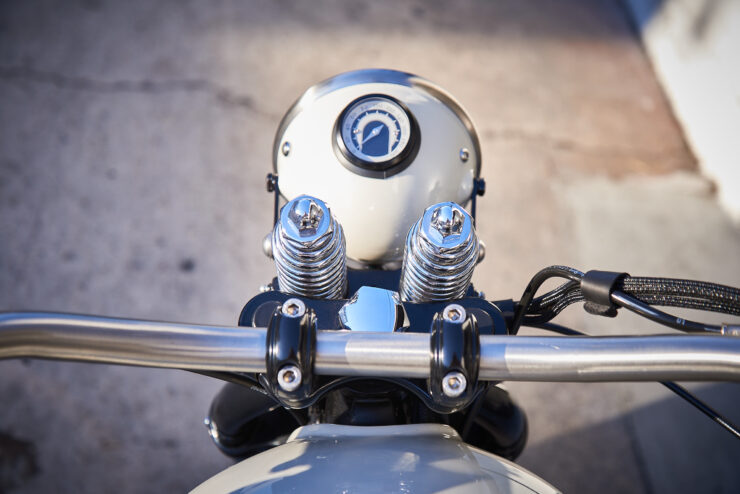 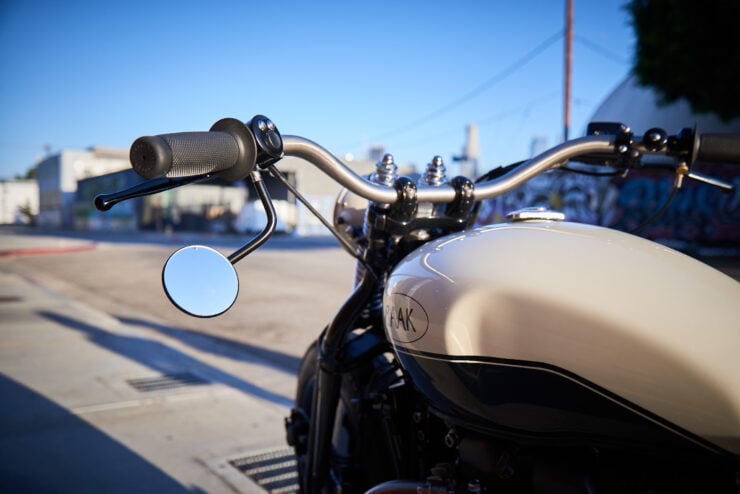 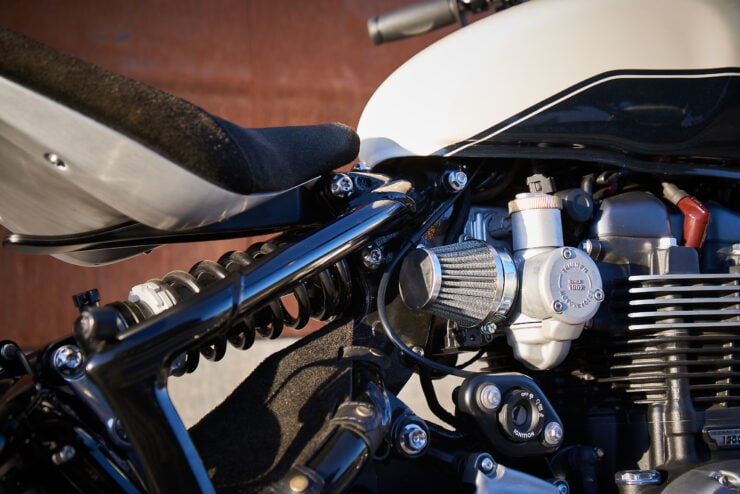 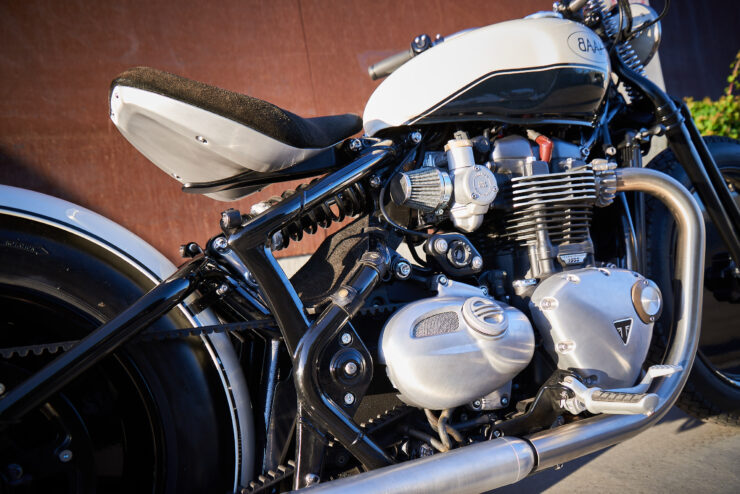 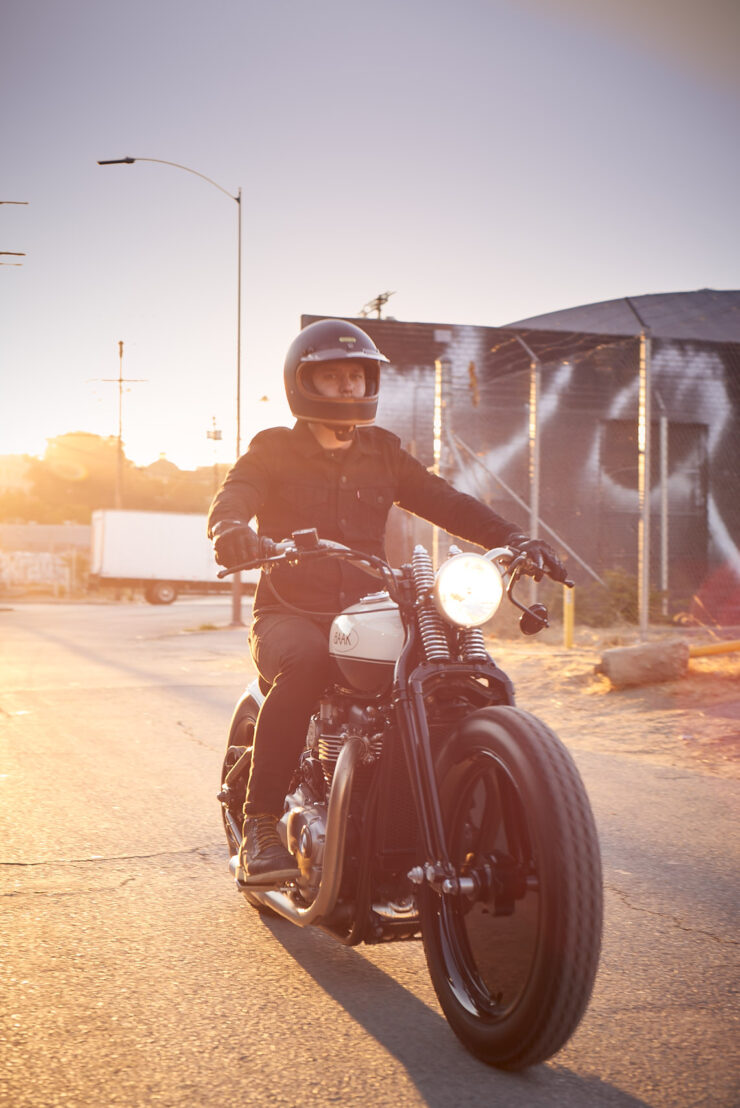 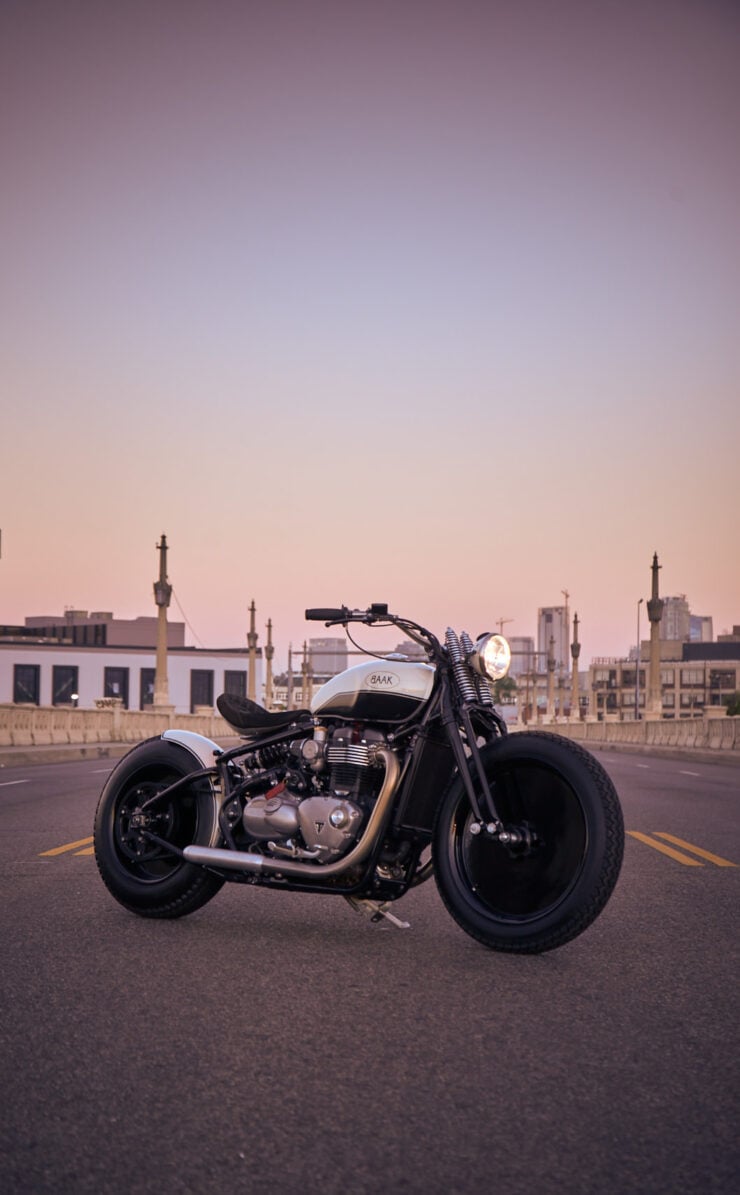 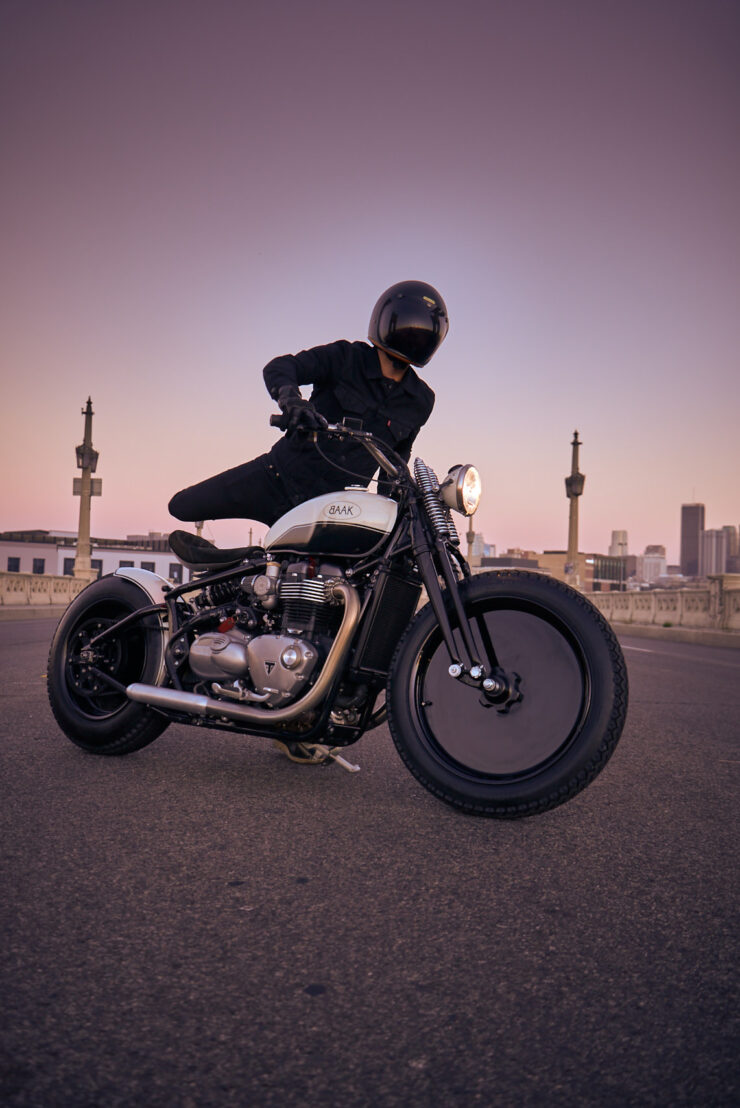 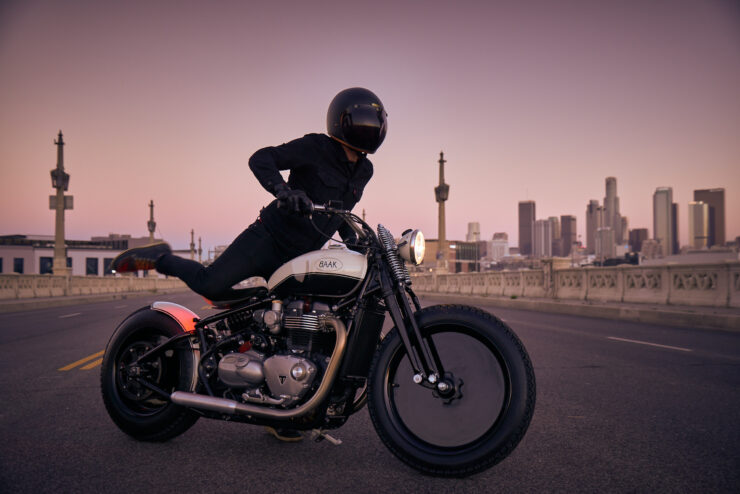 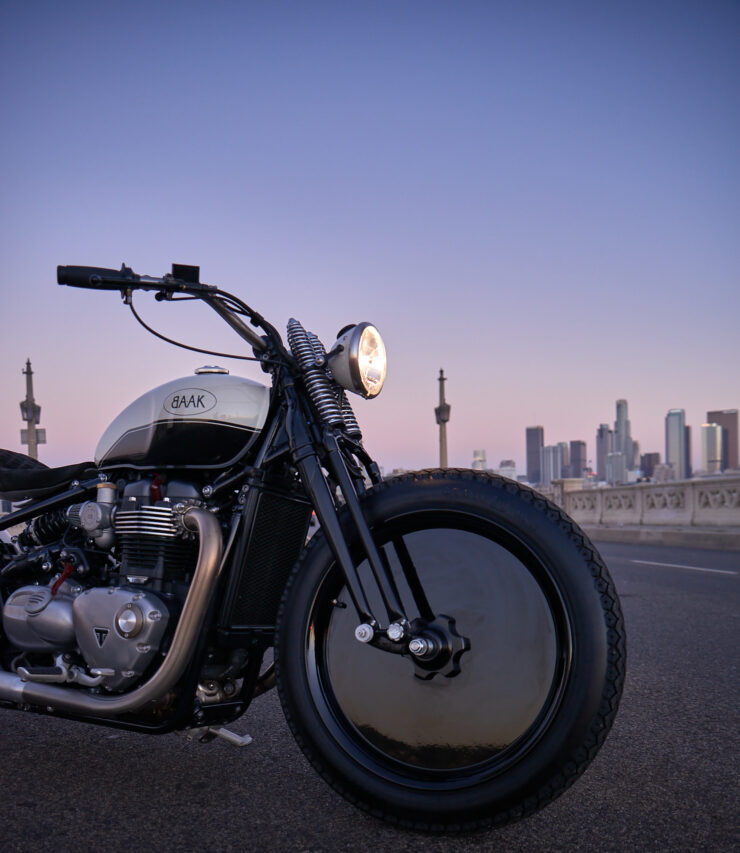 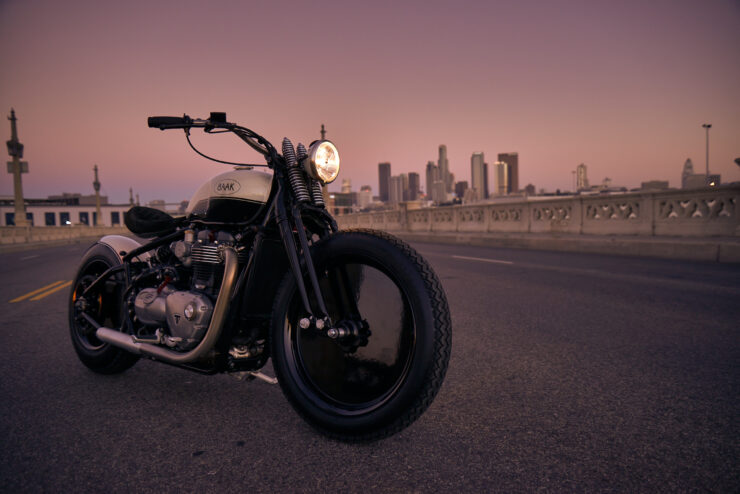