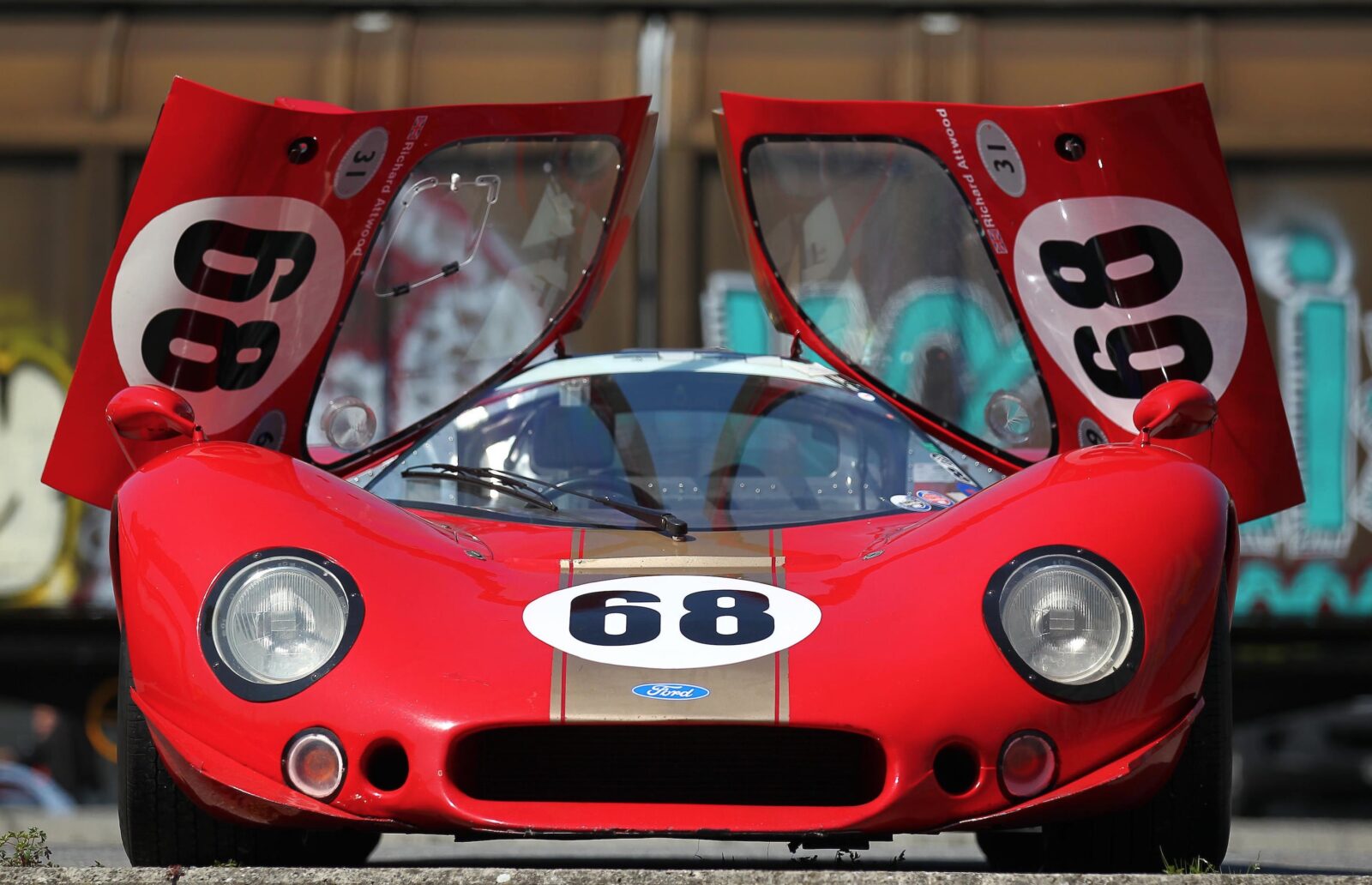 The Ford P68, otherwise known as the F3L for “Ford 3 Litre”, is a sports prototype racing car that should probably be just as famous as the Ford GT40 that preceded it.

It was essentially a closed-wheel, two-seat Formula 1 car powered by the then-new and unproven Ford-Cosworth DFV V8 Formula 1 engine.

The project to develop the Ford P68 was done without the deep pockets of Ford America, who had exited the world of prototype sports car racing at the end of 1967. This left teams running the proven Ford GT40 as privateers, but the development by Ford Europe and Cosworth of what would become the most successful Formula 1 engine of all time opened a new door. 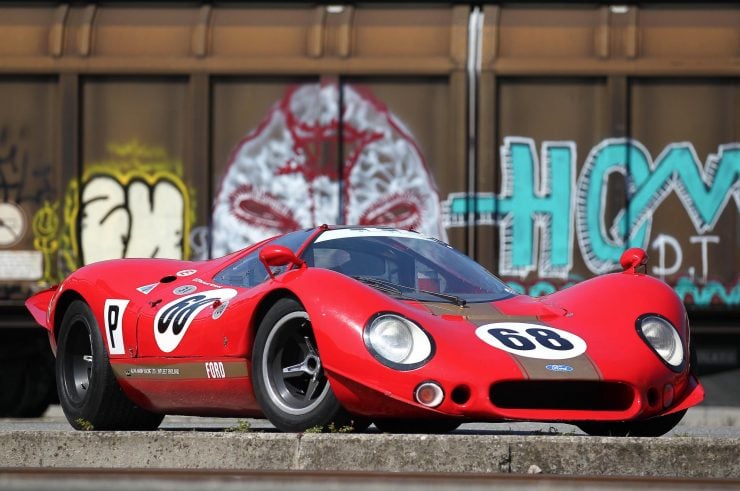 At the end of the 1967 season the FIA revised the rules for sports car racing, the most advanced Group 6 cars could now only use engines up to 3 liters in capacity. Group 4 cars could use engines up to 5 liters, but they needed to have a minimum of 50 built for homologation purposes.

This rule change co-incided with the release of the Ford-Cosworth DFV V8 engine, an engine with a displacement of 2993cc and upwards of 400 bhp available, which made it perfect for use in a sports car which would meet the new FIA rules for Group 6.

A plan to develop a new Group 6 car to utilize the new Cosworth V8 was put in motion by Ford Europe and Alan Mann Racing, though the funding would be an order of magnitude less than had been invested in the GT40 project.

The svelte body of the P68 was designed by Len Bailey, a British automobile designer and a pivotal member of the design team behind the original Ford GT40. Wind tunnel testing confirmed Bailey’s ability to pen a slippery shape, the P68 has a drag coefficient of just 0.27 and it’s capable of speeds in excess of 350 km/h (217 mph).

Underneath the sweeping curves of the body there’s a riveted, aluminum monocoque with steel bulkheads onto which the suspension was mounted. The suspension design was close to a direct copy of the common F1 layout of the era, though the engine wasn’t used as a stressed member as it was in the Lotus 49 (rather it was mounted to an aluminum cradle at the direction of Cosworth engineers) with power sent back to a Hewland DG300 5-speed transaxle.

Bailey’s design for the P68 has a characteristic long swooping tail, with a low nose, elegant curves to accommodate the wheel arches, and a fishbowl-like windscreen offering unparalleled visibility. 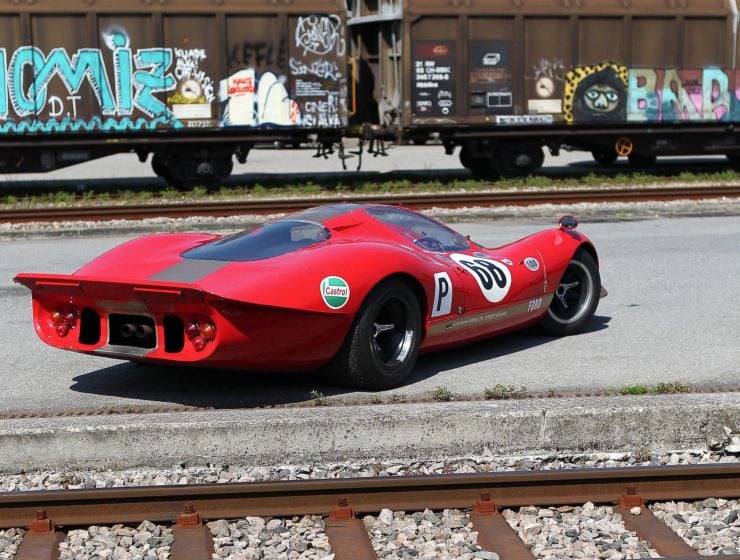 Though the P68 had much promise it was beset by teething problems directly linked to its relative lack of development funding. Alan Mann recalled some of their struggles in his book Alan Mann: A Life of Change:

“Maurice Gomm produced the partially stressed bodywork for the F3L, and it was beautifully made. Everything was packed very tightly within the F3L’s body, making it extremely difficult to work on anything inside it. As we weren’t given permission by Cosworth to stress the engine for endurance racing, we had to continue the chassis around the engine in the back and consequently the exhaust pipes were far too close to everything around them. To save space, the engine coolant ran through pipes built into the chassis, to and from the front-mounted radiator.”

“Running a DFV in that application, as we discovered step by painful step, was very different from its use in a Formula 1 car. What we didn’t understand in those early days was that, being enclosed, the timing gear at the front of the engine was getting hotter than usual, causing the little quill shaft to twist. When operated at too high a temperature it would fail, but it took some time before anybody realised why these failures were occurring.”

Despite the litany of teething problems the Ford P68 proved itself to be a exceptionally quick car when the reliability planets aligned, such was the case at the 1968 Spa 1000 Kms when Frank Gardner qualified the car on pole position – a staggering 4 seconds faster than Jacky Ickx’s Gulf-JW team Ford GT40.

This result alone around the notoriously challenging Circuit de Spa-Francorchamps was unquestionable evidence of the pace possible with the P68, but a continued lack of full funding from Ford America resulted in the P68s struggling from race to race with constant reliability gremlins. 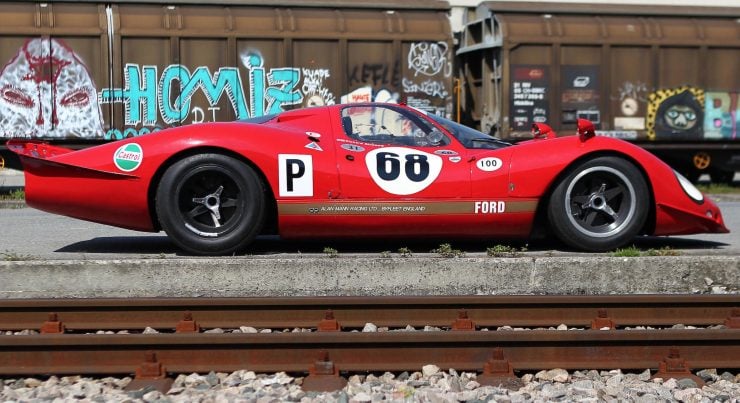 The cars were mothballed at the end of the 1968 season without ever really having had a chance to stretch their legs and show their true pace in competition. A short-lived attempt to modify the car into P69 specification was made, but it was similarly underfunded, and it suffered a similar fate.

Many years later the surviving cars, missing many original parts, were very nearly scrapped when Ford was clearing out a warehouse. Fortunately they were saved by Doug Nye and Tom Wheatcroft, who added the cars to Wheatcroft’s Donington Museum.

In 2006 David Piper hired Len Bailey, the car’s original designer, to come onboard and help fully re-commission the cars, including a series of improvements. This was the second chance that no one realistically thought the Ford P68 would ever get – and it would finally give the surviving cars the development they needed to be genuine world-beaters, now in vintage motorsport competition. 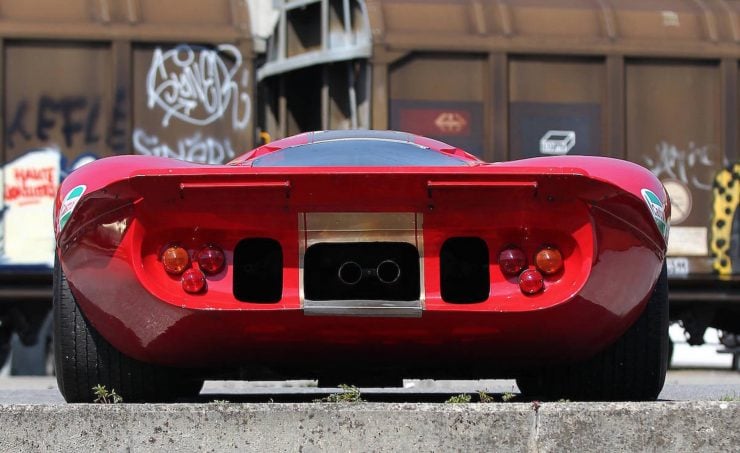 This car is chassis #002, it’s been through a no-expense-spared restoration. The chassis was rebuilt by Ford GT specialists Gelscoe, all of the suspension was re-manufactured, a new DG300 gearbox was provided by Peter Smith, and the engine is now a long-stroke DFV rebuilt by Geoff Richardson.

Since its restoration the car has completed approximately 8 hours of shakedown testing at Spa-Francorchamps, Jarama, and at Ricard-Castellet.

The car is now being offered for sale with current FIA HTP paperwork and a spares package, ready to write a new chapter in the racing history of the huge promising Ford P68 – though this time the car has been comprehensively developed to the level it should have been in 1968. 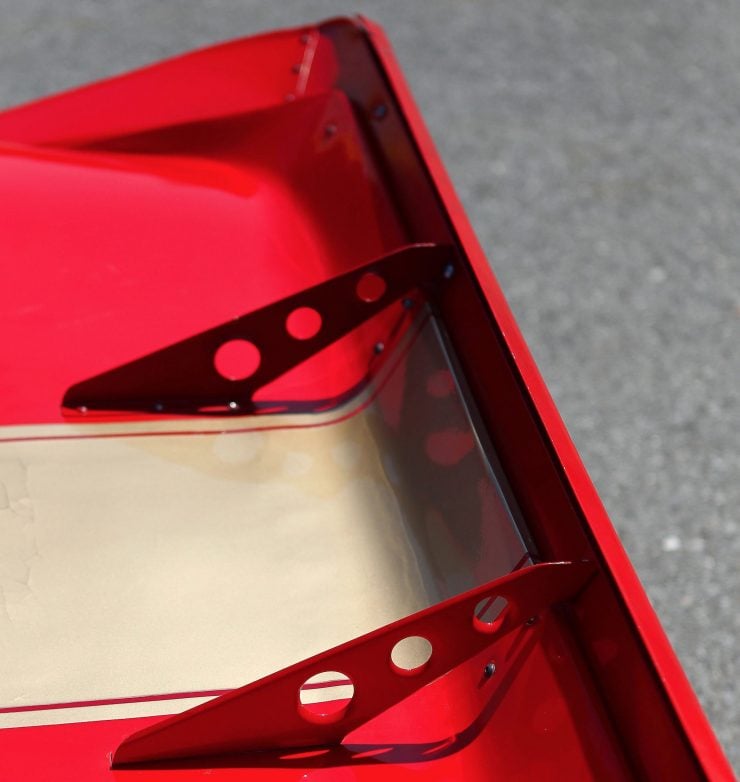 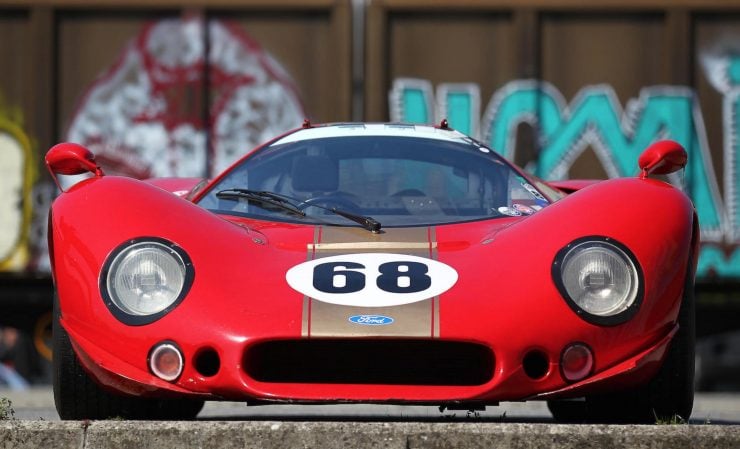 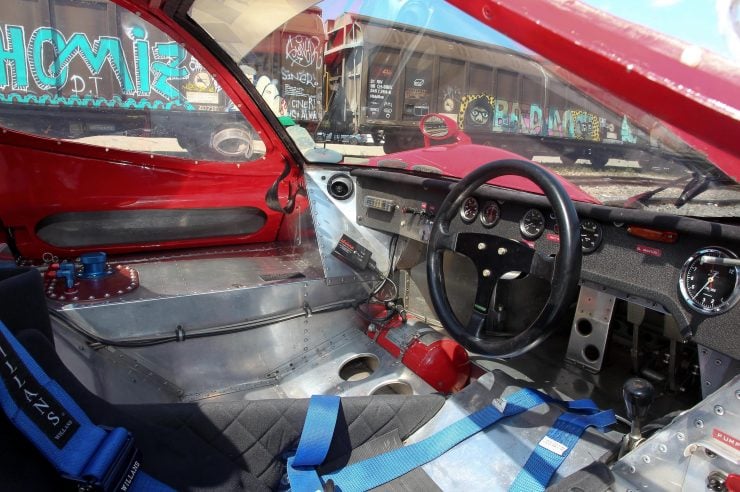 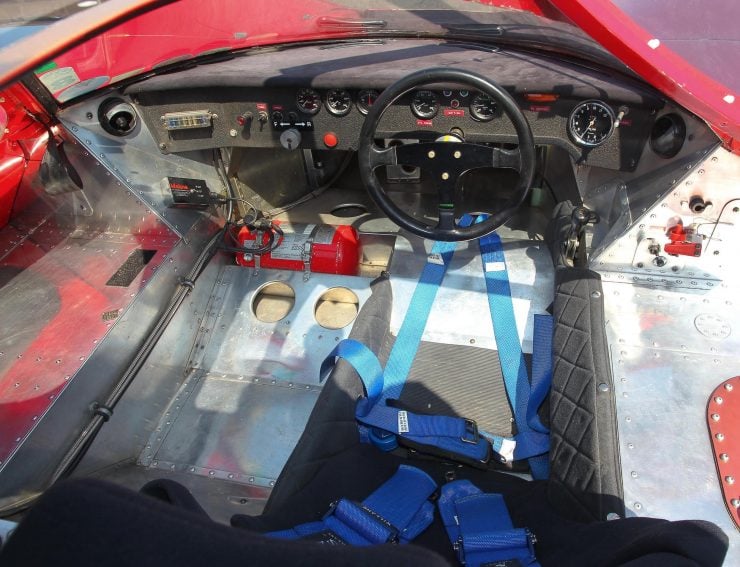 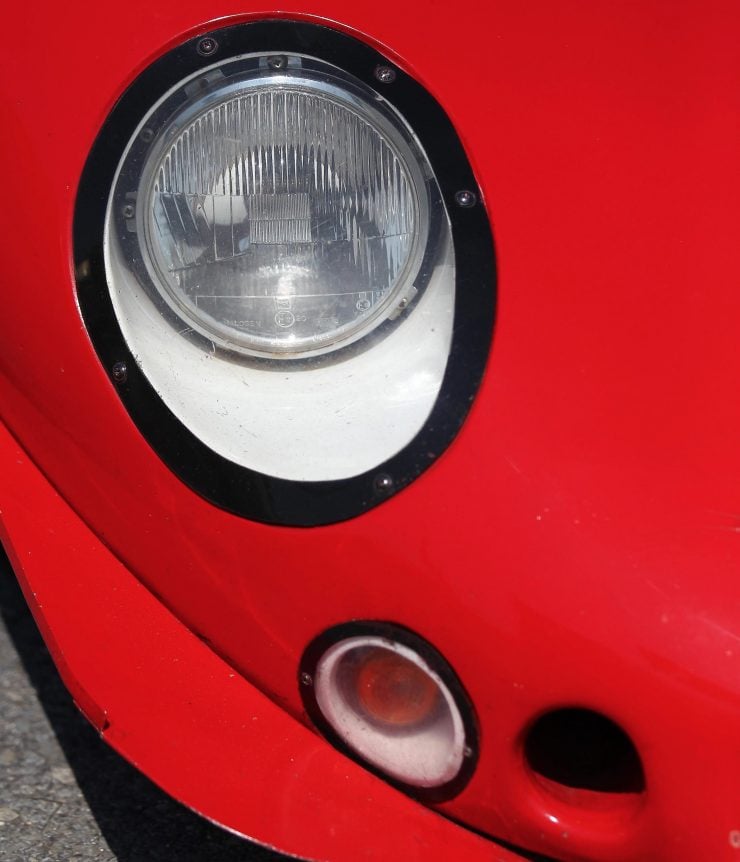 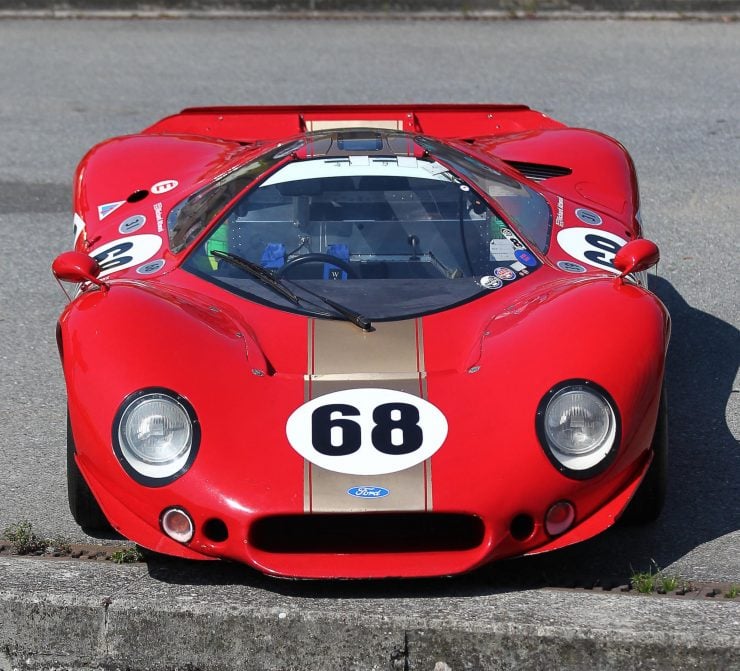 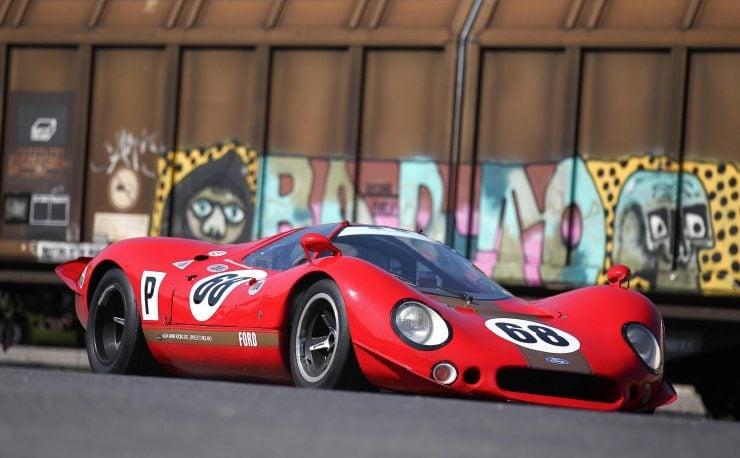 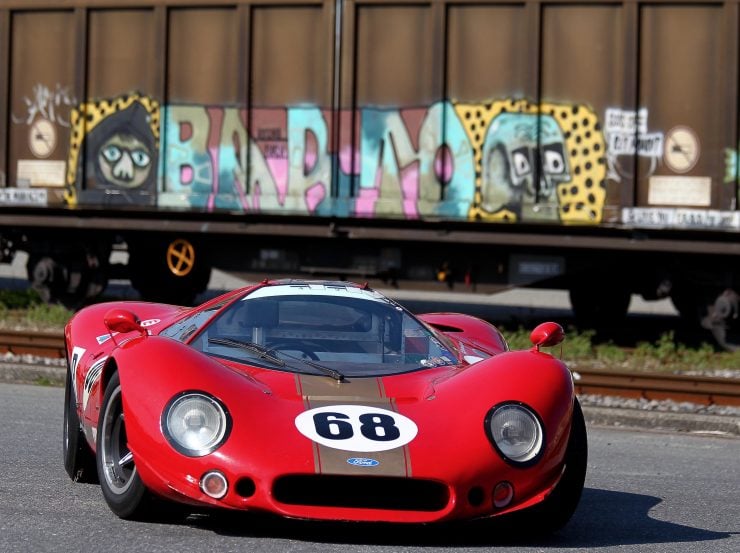 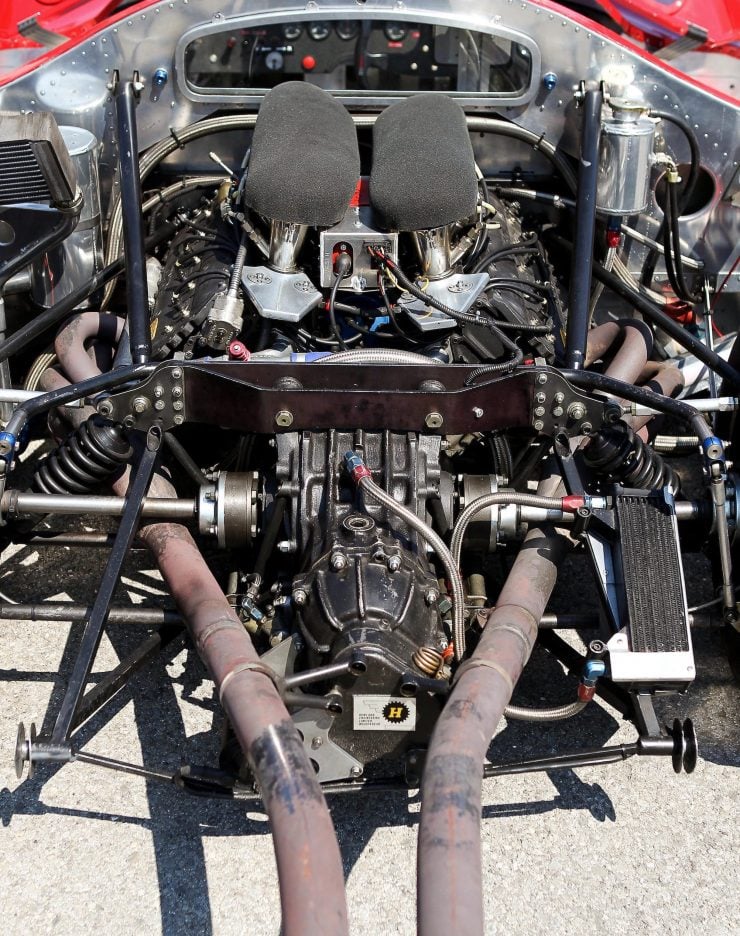 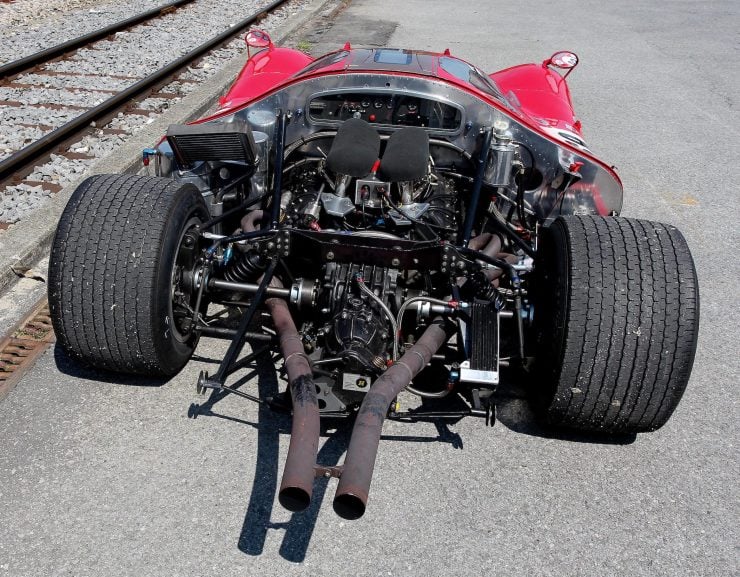 The Pink Panther, often referred to as the “Pinkie”, is a heavily customised Land Rover Series 2A built for British Special Air Service desert warfare operations in the Middle East. The SAS are globally renowned…

The Ford Falcon XY GT-HO Phase III is one of the most valuable Australian-made cars in history, but it’s largely unknown outside its home country. It was built in the early 1970s as the third…

The Jensen Interceptor was built by the relatively small company out of their West Bromwich factory to compete with the likes of the Aston Martin DB6, the Ferrari 365 GT, the Jaguar E-Type, and the…

The Moto-Lita Mark Four is a classically-styled leather rim steering wheel from the storied British company with an aluminum-alloy chassis, and characteristic circular cutaways in the arms to reduce weight. Moto-Lita has been a leading…