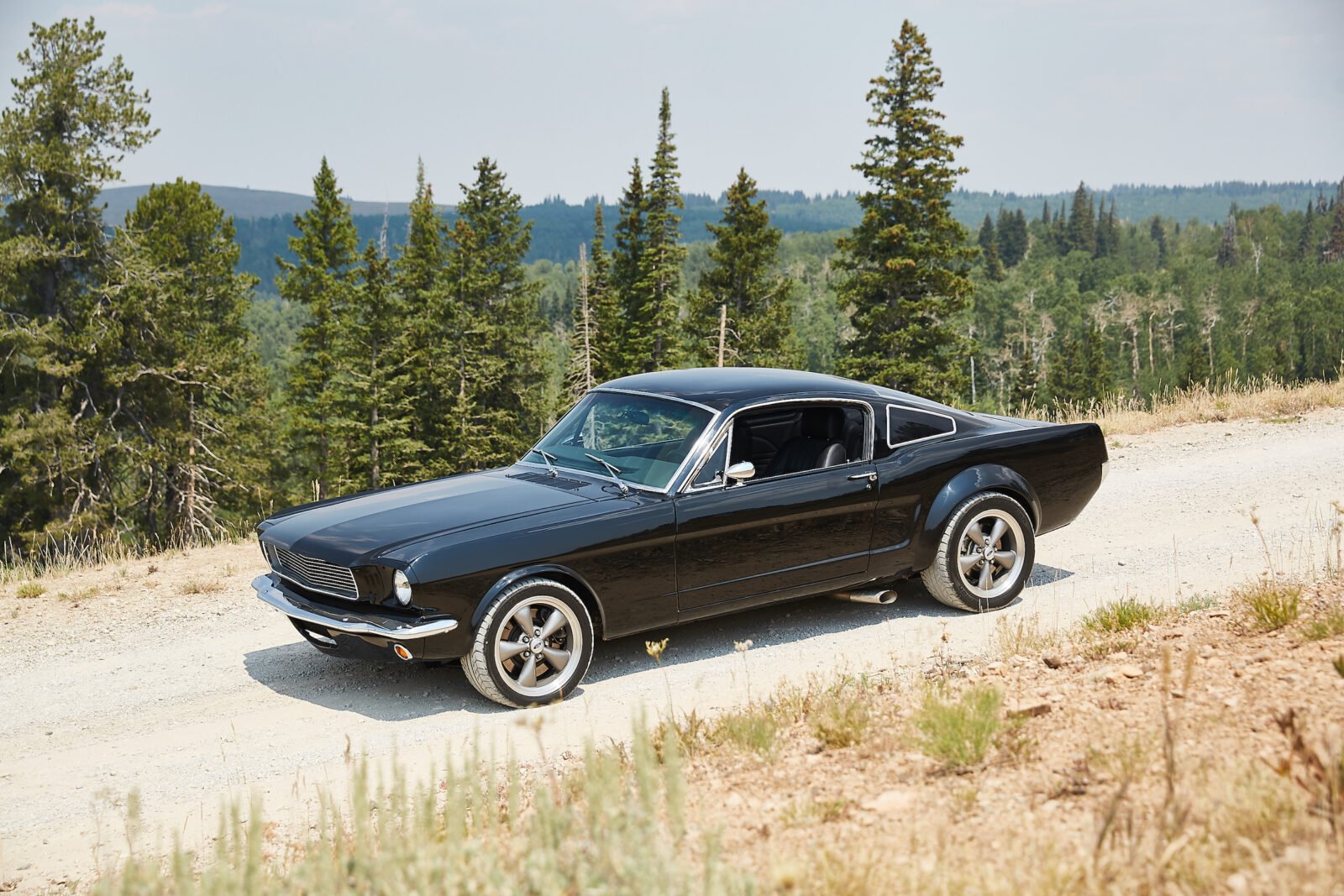 This article was written by Stan Evans, Stan is a highly-respected photographer and a popular figure in the motorcycle and automotive worlds. He’s previously worked for Edmunds, Blacksmith Engineering, Red Bull, HBO, Columbia, and Facebook.

Mustang in the Wild

A few years ago I traveled to palm springs for a romantic getaway with an old girlfriend. Our hotel room had a turntable for kitschy ambiance that is easy to overlook this in this day and age of constant stimulation – Ear pods, Bluetooth headsets and small portable speakers dominate the soundscape. The sound is crisp.

The music is never far away and the experience can be repeated time and time again with precision making it commonplace. But with that turntable I remember the records and every song, as I had to be delicate with the needle and flip the albums to continue the mood. The unique way a faint pop and crackle filled the room before every song started but for the life of me. I can’t remember what I listened to yesterday on Spotify.

What if you could repeat the reliability of digital sound with the visceral experience of high fidelity wax recordings? 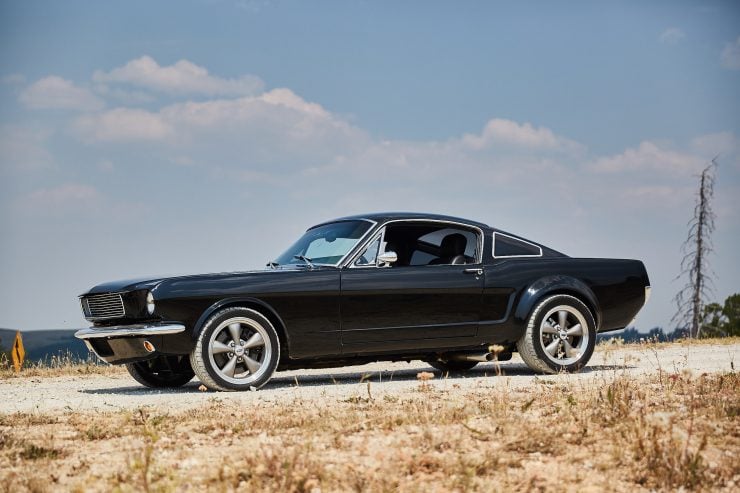 This 1965 Patrick Dempsey SVT Mustang harkens back to those days of when you had to pay attention while driving a performance car. It took finesse of technique – no driver’s aids cheat the skills necessary to pilot this beast. That alongside a large pocket book is the price of admission. How I ended up behind the wheel is as much of a mystery to me as it to you but after completing a series of photo jobs for Blacksmith Garage. The owner threw me the keys to this machine and told me to take it for a spin as an impromptu thank you.

So what do you do when you unexpectedly find yourself in the middle of nowhere Utah with a 550 horsepower supercharged resto mod and time to kill on a Saturday afternoon? Luckily I knew these back roads from my time spent in Salt Lake and Highway 39 is as twisty a bunch of serpents lying atop one another. The perfect testing grounds to see what a Cobra drivetrain thrust in a 1965 body could do.

Turn the key and the growl of a junkyard dog greets you. It’s easy to tease when you know it’s on the leash but unchained it could take a large bite. It’s a contrast to the sublime interior finished in black leather and metal accents. Gauges are stark – easy to read and the Unicorn logo emblem on the steering wheel and RPM gauge show that Panoz and Dempsey have worked a sense of humor in this undeniably menacing vehicle.

I couldn’t tell you how the stereo sounds because I never even turned on the radio. Stomping on the gas is a much sweeter sound as the underslung, dragster style exhaust is right beneath the doors. The power is punchy but predictable as I find myself drifting out of tight turns and having fun with oversteering. The clutch is lighter than expected, usually in older cars shifting is a calf workout but I have to remind myself that I’m dealing with components that have been retro fitted from the 2005 – 2008-era Mustang. 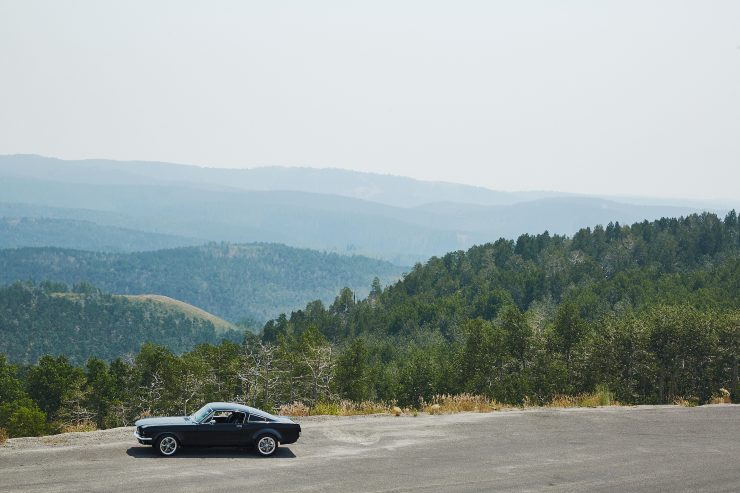 There’s a selfish truth here – some will argue the originality of classic car but this is a performance oriented machine with reliability that is directed by classic aesthetics. I predominantly ride motorcycles and inevitably in bike crews rides there’s always a bike that breaks down. The truth is if I wanted to work on someone else bike in my free time I’d have become a mechanic but I’m a photographer and I like using my time to ride instead of wrench. For the purists there are two options for those that want to relive a classic car experience – Buy a completely restored 1965 Ford Mustang or travel back in time.

I’m content with this car because every time I catch a glimpse of it or flick the shifter with my wrist it brings a huge smile to my face. It’s such a visceral experience – windows open, trees flying past in a blur. It’s easy to feel badass like McQueen but it really more akin to a child falling down a swirling slide for the first time. It’s all the nostalgia of a Super 8 film transferred to MPEG-4 and you can hit repeat all you want.

As I reach the plateau on the mountain pass I stop at the pullout to take a break from lighting all my senses to reflect on the beauty of where I’m at and what I’m driving. The feeling is infectious because two couples stop to take photos and ask questions about the car. Their smiles are genuine and the excitement is real because for a moment they’ve laid their eyes on a bit of automotive heritage that has some secrets under the hood.

Imagine walking close enough to a sleeping dragon, being able to pet it and walk away unscathed. 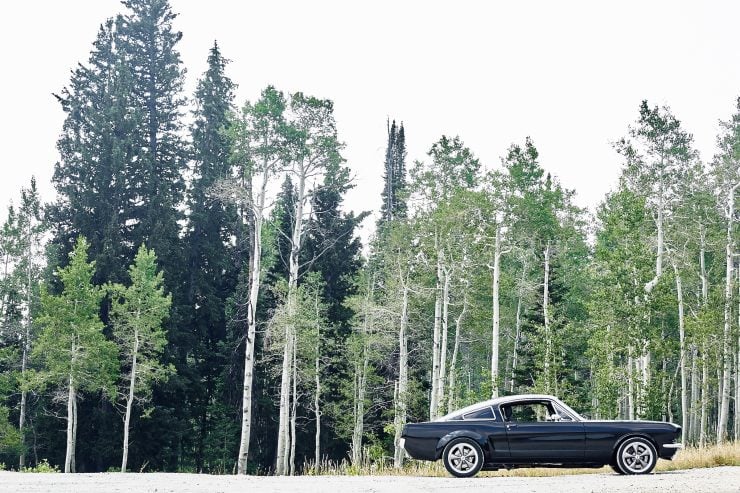 That’s what this car is. A race machine developed in a deep legacy of sports car pedigree. Dan Panoz formed Panoz Motorsports in 1989. In 1997 with the help of his father Don Panoz the duo focused their attention on racing and entered its brand new car, the Panoz Esperante GTR-1, at Le Mans. The team was competitive, finishing ahead of all but two of the major factory teams in its class. In 1999, Panoz founded the American Le Mans Series with the aim of bringing European-style endurance sports car racing to the Americas.

After I take a few photos I glance at my watch and the hour that I was supposed to be gone is well past. I have no cell service because I’m alone – deep in national forest land but – it’s easier to ask for forgiveness than permission. Besides, it’s just another excuse to drive extremely fast, back to the garage.

Thanks for Patrick Dempsey and Dan Panoz for building this thing and eventually moving on so I could have an opportunity to drive it. 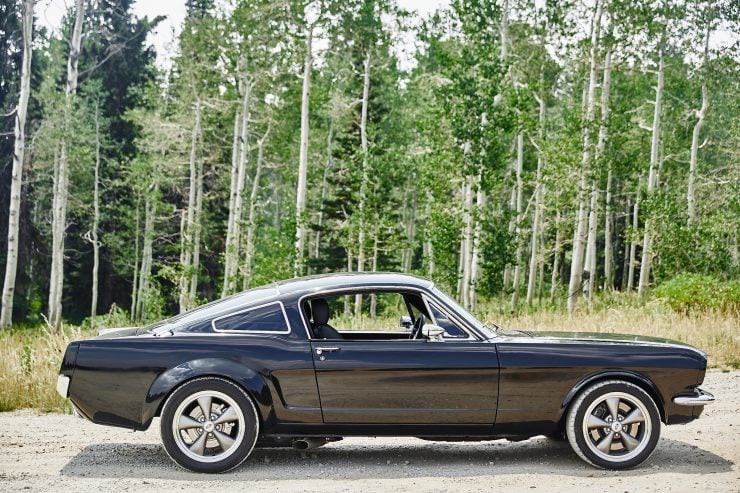 The information and specifications below were compiled and written by Silodrome staff writers.

In 2008 racing driver (and actor) Patrick Dempsey worked closely with the team at Panoz to develop what he believed was the perfect 1965 Ford Mustang Fastback.

The project had no limit on price, the key was to build the greatest custom ’65 Fastback of all time. By the time the car was complete over 3,900 hours of labour had been spent on it, as well as over $300,000 USD.

Dempsey is best known for his role as neurosurgeon Derek “McDreamy” Shepherd in the television series Grey’s Anatomy and his slew of leading film roles, but in the motor racing community he’s known as a genuinely talented racing driver in the vein of Paul Newman.

In interviews Dempsey has said he’d quit acting and race full time if he could, he’s competed at the 24 Hours of Le Mans, the Rolex 24 at Daytona, and Ensenada SCORE Baja 1000 off-road race.

He’s also a co-owner of the Vision Racing IndyCar Series team and the current owner of Dempsey Racing, the latter of which can be seen competing at world class events in the USA and Europe.

Though he’s best known for his love of Porsches, particularly 911s, Patrick has an expansive collection of cars including a number of American icons like the Mustang. 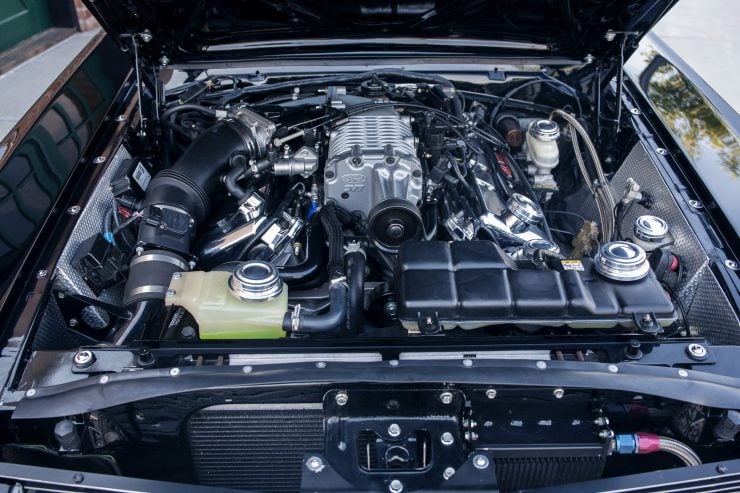 The car you see here is a one-off build that started from bare metal using hybrid a unibody and space frame architecture integrated with an original S197 5th generation Mustang floorpan and firewall.

It has a fabricated torque box, front and rear crush zones, and integrated side impact protection – offering far better passenger safety than any ’60s muscle car ever could.

Under the hood you’ll find a 2004 (SN95) Mustang Cobra SVT V8, it’s a supercharged 4.6 litre engine with 32 valves, double overhead cams, and 390 hp and 385 ft lbs of torque. This engine was then tuned by the engineers at Panoz to produce 420 hp and 420 ft lbs of torque, all sent through a Tremec T56 6 speed manual transmission. 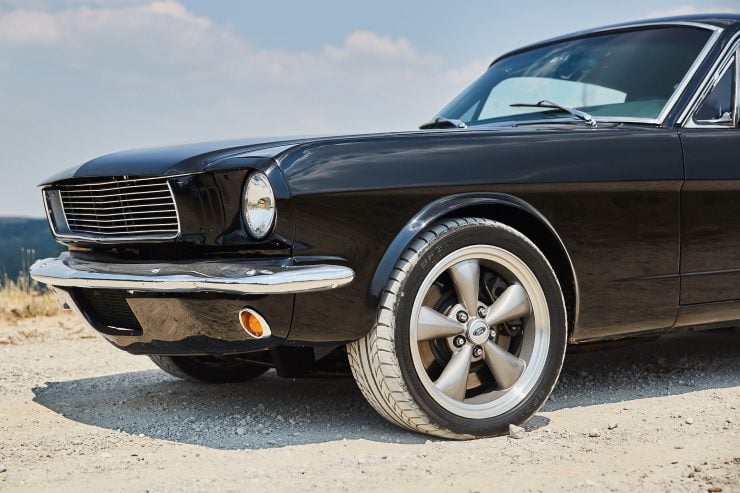 The suspension is all considerably more advanced than what was used on the original car, up front there’s a Panoz version of the SN95 code Mustang system updated with coil over shock absorbers and adjustable double wishbones. In the rear there’s a three-link live axle from an S197 code Mustang with modern disc brakes and ABS.

Inside the car you’ll find a black leather interior, the car was purchased from Dempsey by the team at Equus Automotive, best known for their BASS 770 modern muscle car. You have to wonder if they took some inspiration from this Mustang given the similarities.

The car was built to be daily driver capable, so it has air conditioning, a Becker Mexico radio with Bluetooth, power seats, power door locks, and power windows.

If you’d like to read more about the car you can click here to visit Blacksmith Garage, it’s currently listed for sale although there’s no price listed, you can contact the team at Blacksmith for additional information. 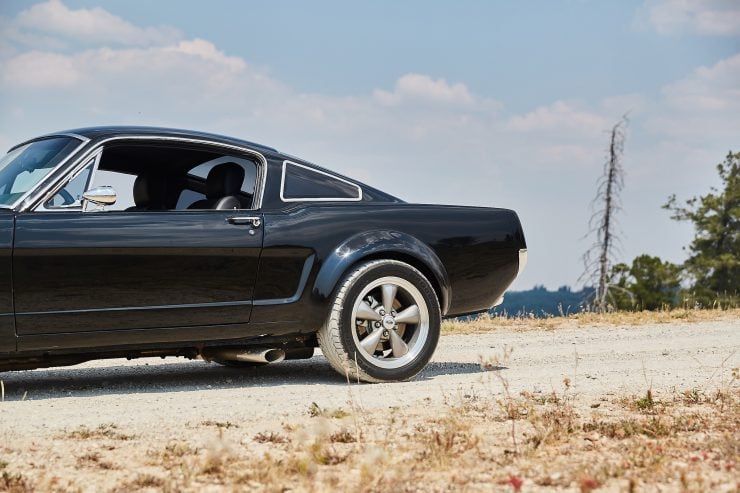 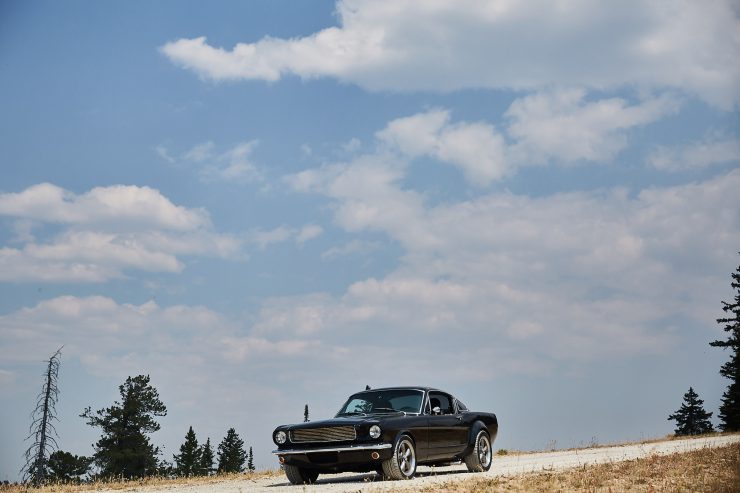 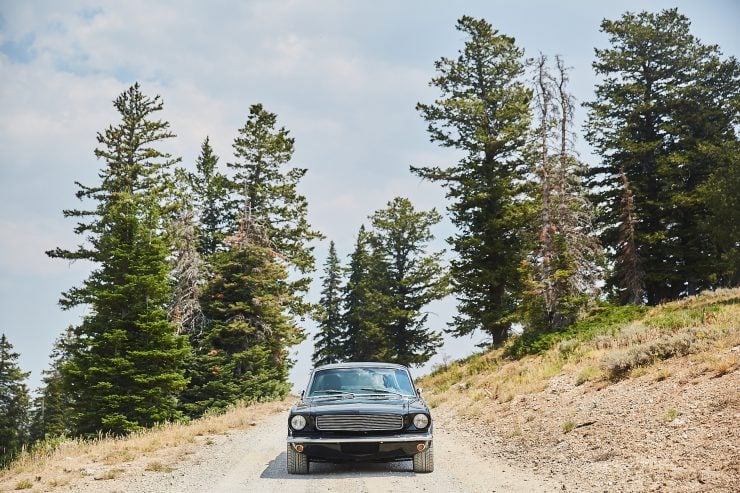 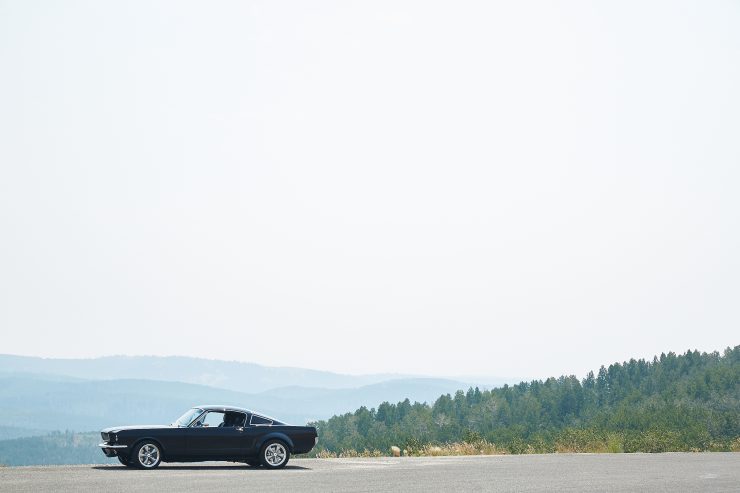 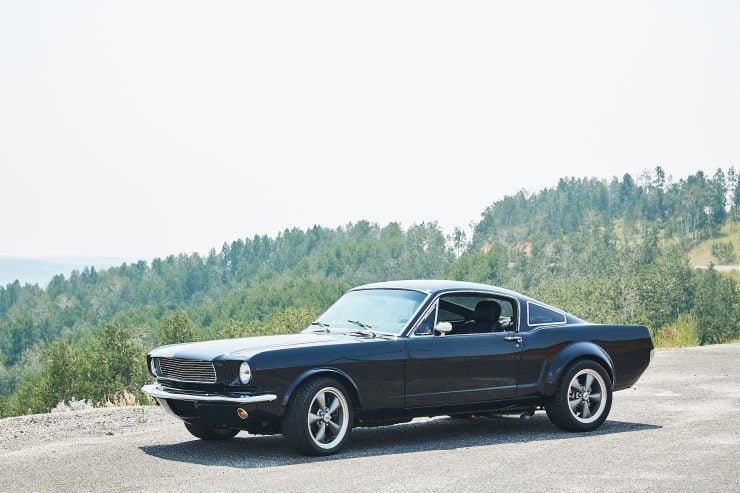 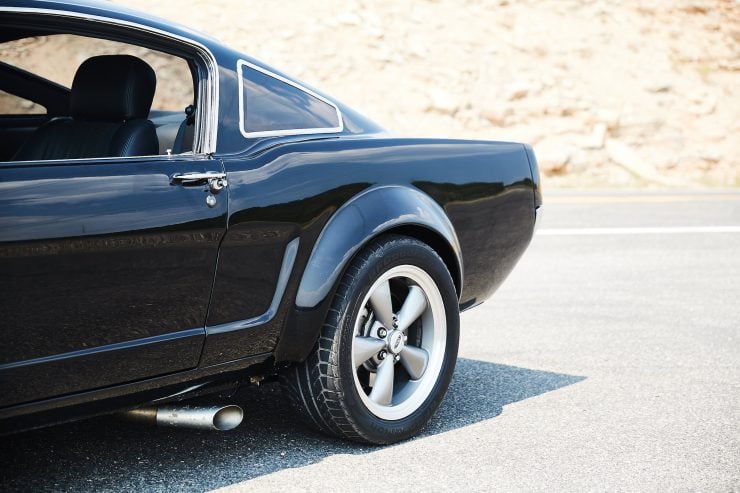 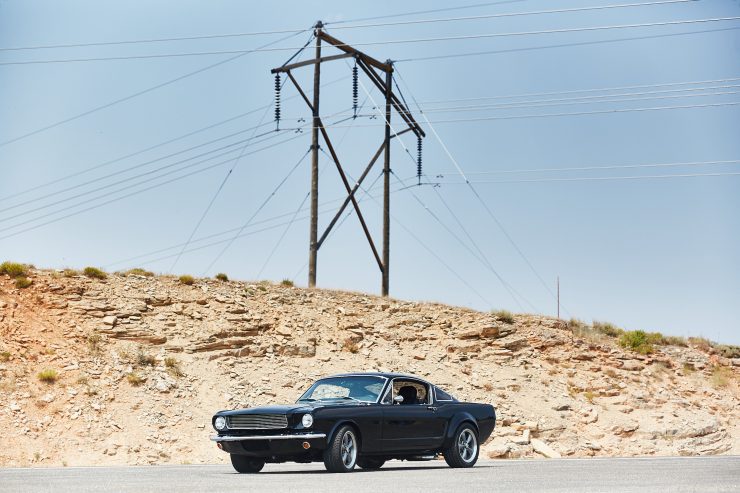 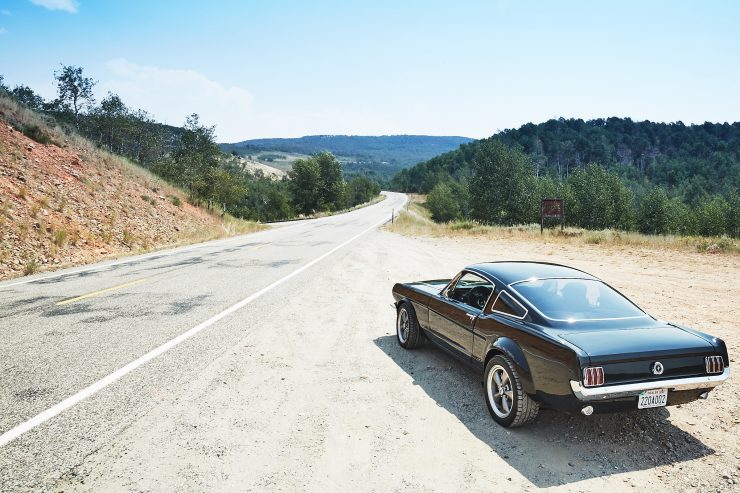 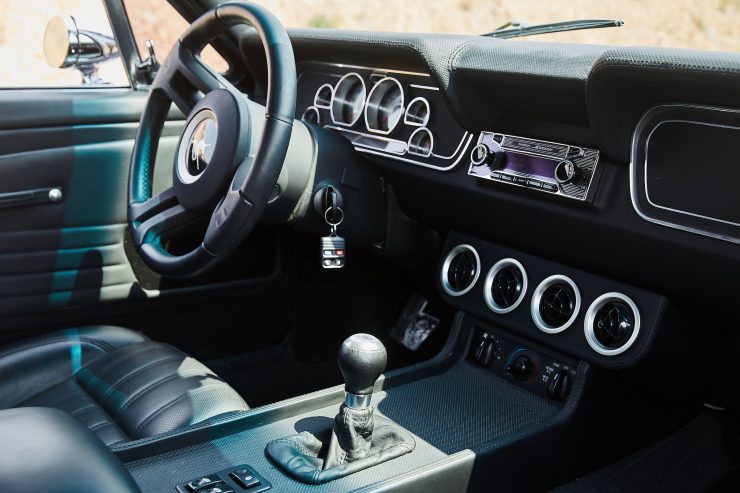 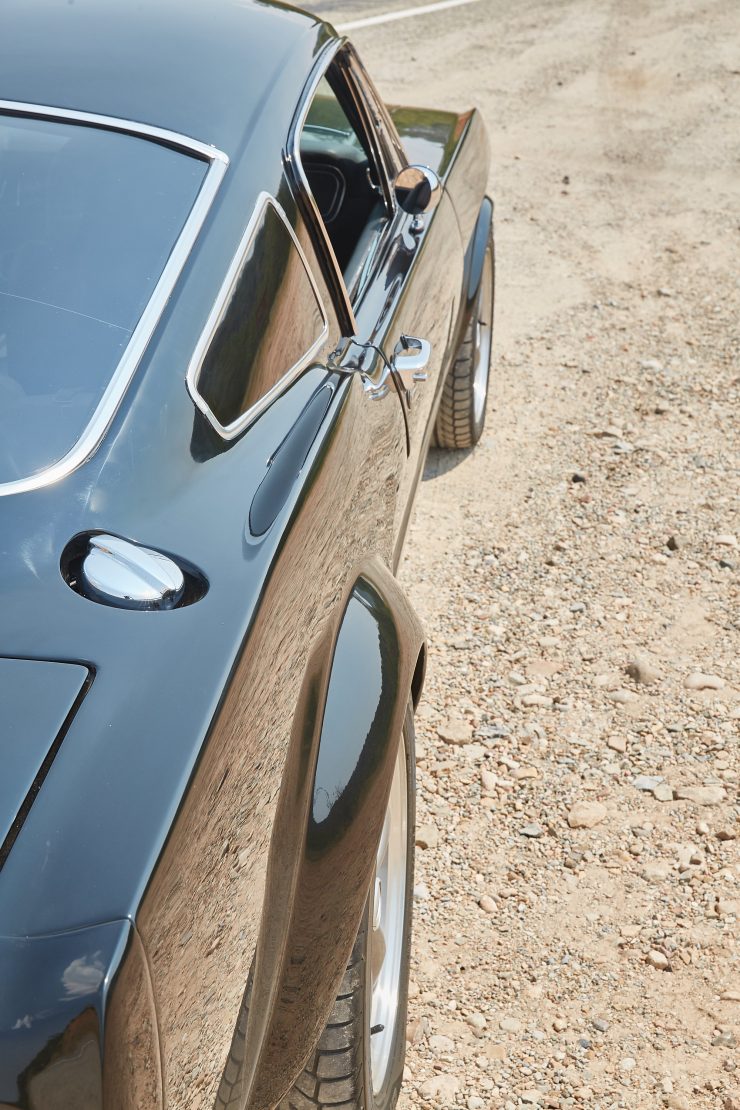 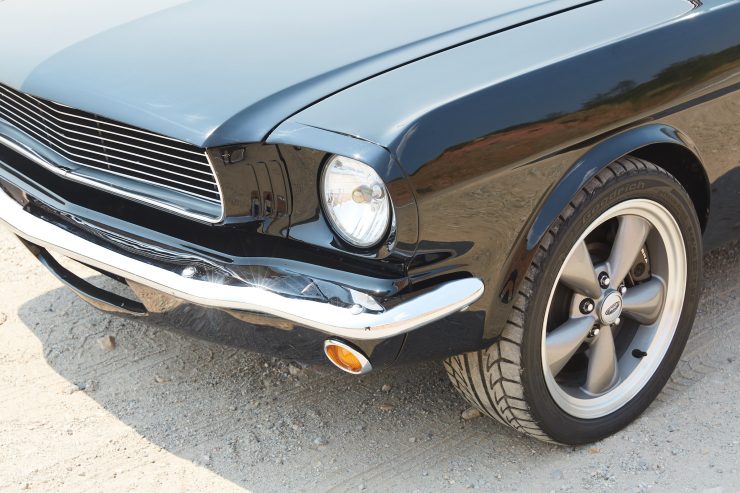 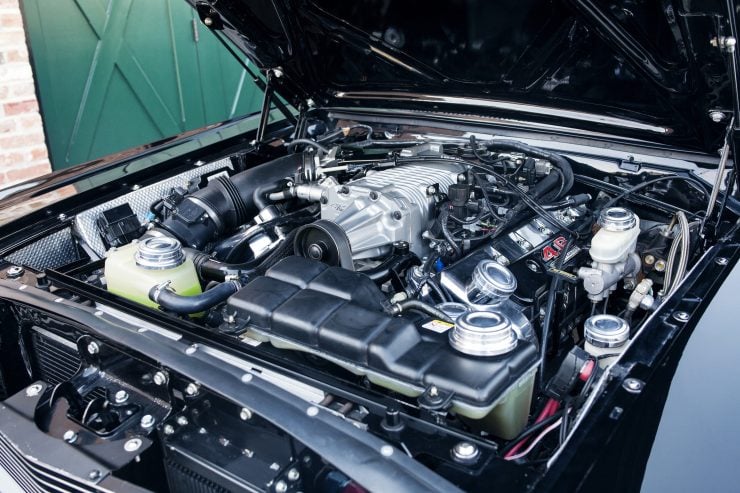 I’m not an ambassador or influencer. I’m a photographer. I’m inherently shy at first but genuinely love people and hearing their stories, which is why I take pictures – to remember those experiences. I’m easily distracted by fast things and I started @upforadventuress 7 years ago on a suggestion from a friend to use it as a way to document my two week moto trip across the western US.

I believe in quality vs. quantity which explains my negligible instagram following but you can find me here @stanevansphoto better yet I’d rather you just walk up and say hi anyway. We can be friends that way! I’ve worked with these brands: Edmunds, Blacksmith Engineering, Red Bull, HBO, Columbia, and Facebook to name a few and you can see the fruits of those labors here.