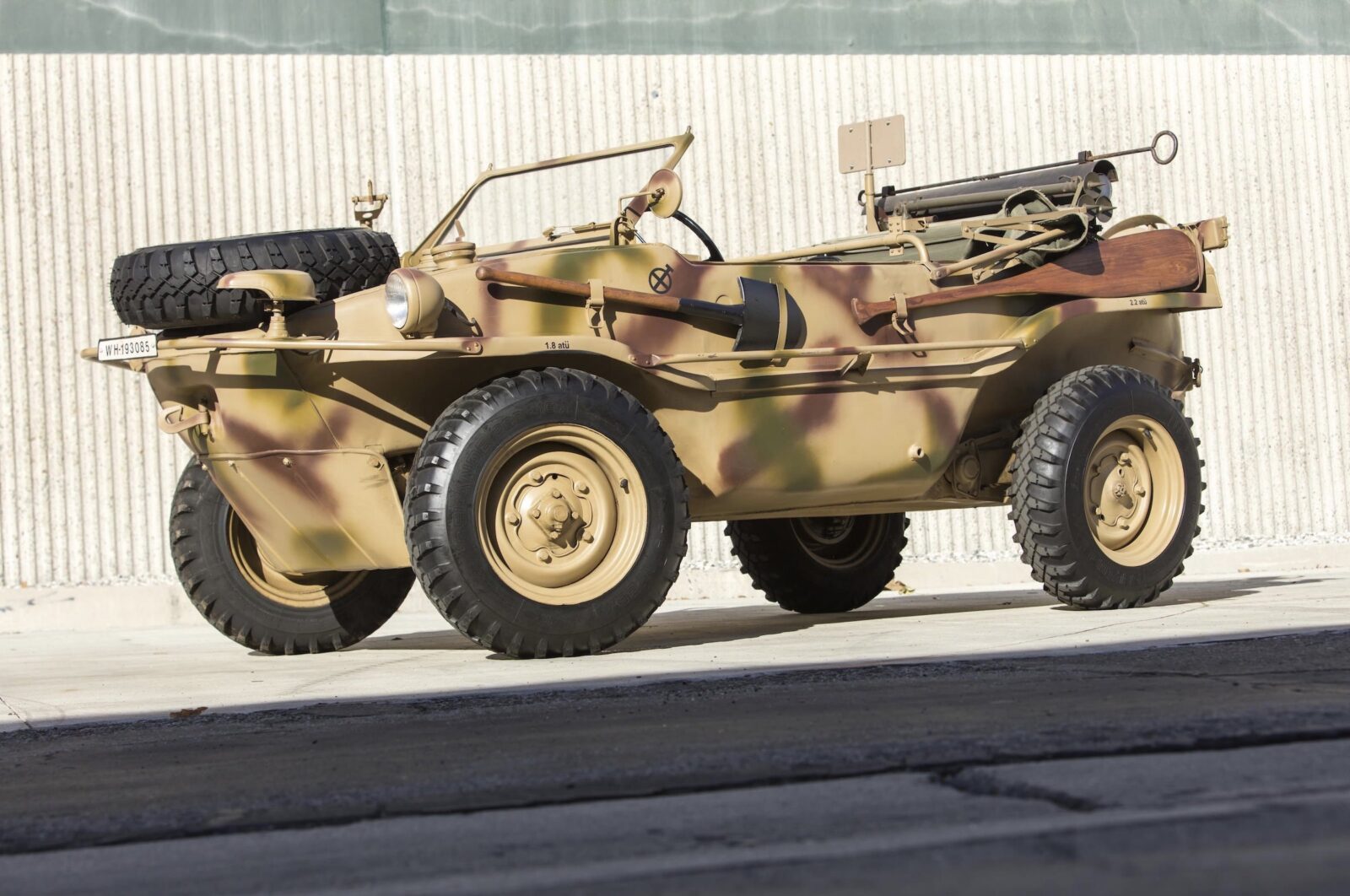 The Volkswagen Type 166 Schwimmwagen was one of the most remarkable vehicles developed during WW2.

It was an amphibious 4×4 designed by the same man who would later design the Porsche 356 and the Porsche 550, and who had significant input into the design of the Porsche 911 – Erwin Komenda.

When it was designed in the early 1940s the Schwimmwagen was remarkably advanced – it featured full 4×4, fully independent suspension on all four corners, a water-tight hull, it had ZF self-locking differentials on the front and rear axles, portal gear hubs on the rear to give better ground clearance, a power take off that operated the propeller, and it had a top speed on land of 50 mph (80 km/h).

As you may have guessed, the German word “Schwimmwagen” literally translates into English as “Swimming Car”. Germans are a famously logical people, which is why they so often make excellent engineers. 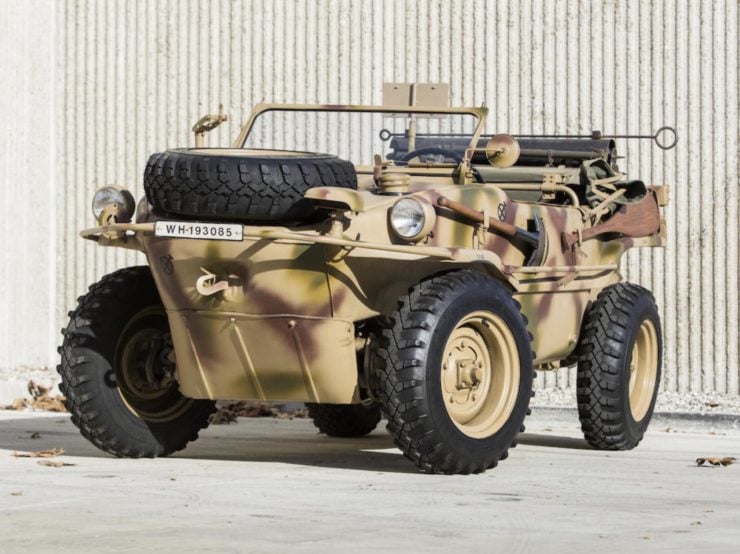 There were two main versions of the Schwimmwagen built, the Type 128 and the Type 166. The Type 128 came first, it was essentially a production prototype of sorts and it had a few significant issues which were rectified in the Type 166. The early 128s were based on the Kübelwagen chassis that had been welded into a custom water tight tub, although cheaper to produce it proved too weak for any significant off roading and hull ruptures at the front cross-member or wheel-wells were commonplace.

The Type 166 Schwimmwagen used a shorter wheelbase of 200cm (vs the 240cm of the Type 128) with a custom water tight hull designed to be strong enough to withstand significant off road use.

In order to keep costs down and improve ease of maintenance, the Schwimmwagen uses essentially the same 1131cc, 25 hp H4 air-cooled engine as the Volkswagen Beetle and the Kübelwagen. Altough not powerful by any reasonable measure, the VW H4 had proven to be resilient and it would work well in the Schwimmwagen in part thanks to its relatively low gearing.

The Germans had commissioned the development of the Schwimmwagen as a reconnaissance vehicle which was a role in which it excelled, it became widely used in many parts of Europe during the war and it’s estimated that over 15,000 were built by the time the war ended. Allied troops found thousands of them as they marched towards Berlin, they were treated as something of a novelty and many residents of these countries would take surviving Schwimmwagens as their own. 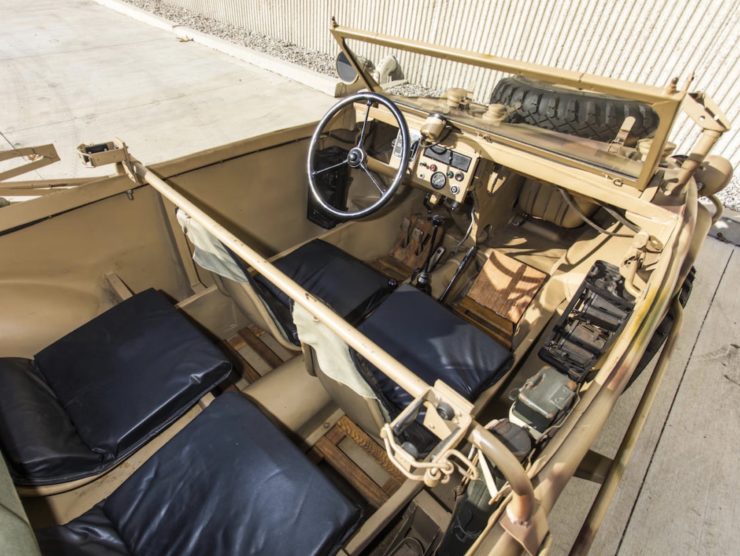 It’s believed that there are only approximately 500 surviving Schwimmwagens now, most have been restored over the years to keep them functional, and many are in museums. It does seem a shame the design wasn’t put into production in the years after the war when the Allies were working with the Germans to get their economy back on track.

The simple design of Erwin Komenda’s Type 166 Schwimmwagen would prove to be one of the best engineered amphibious vehicles of the 20th century, which makes the fact that it has the highest production numbers of any amphibian seem quite fitting.

The Schwimmwagen you see here was comprehensively restored in 2006, which included the vehicle’s running gear, bodywork, and trim. It’s now finished in “sumpftarnmuster” swap pattern camouflage and looks exactly as it would have done in 1945.

It’s not common for Schwimmwagens in this condition to come up for sale so we expect quite a bit of interest when it cross the block with Bonhams on the 5th of March. The price estimate is between $100,000 and $125,000 USD and it’s being sold without reserve. If you’d like to read more or register to build you can click here to visit the listing. 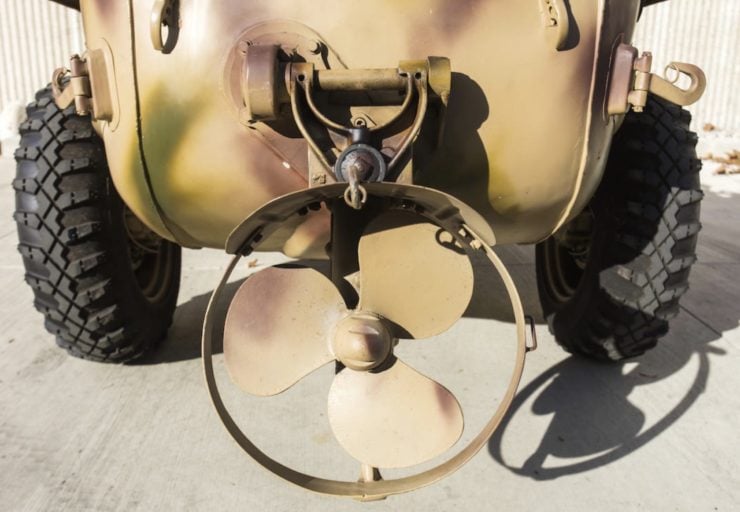 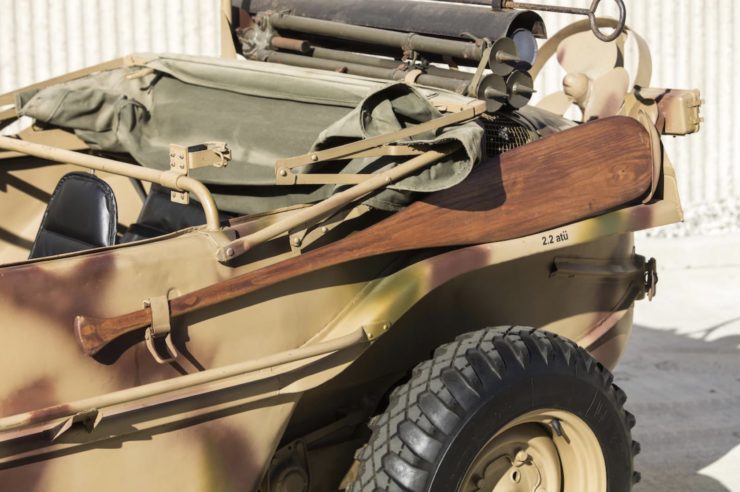 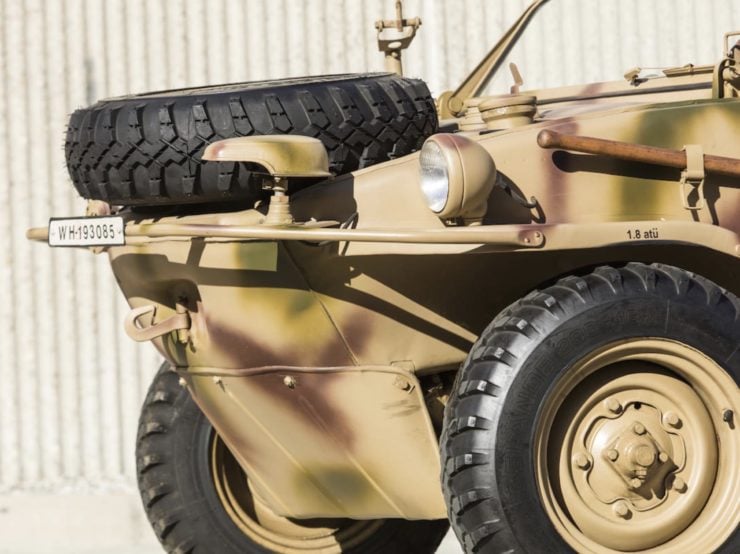 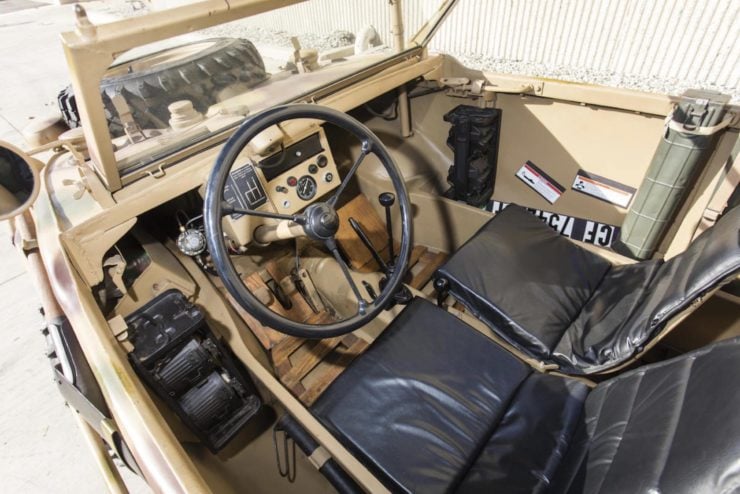 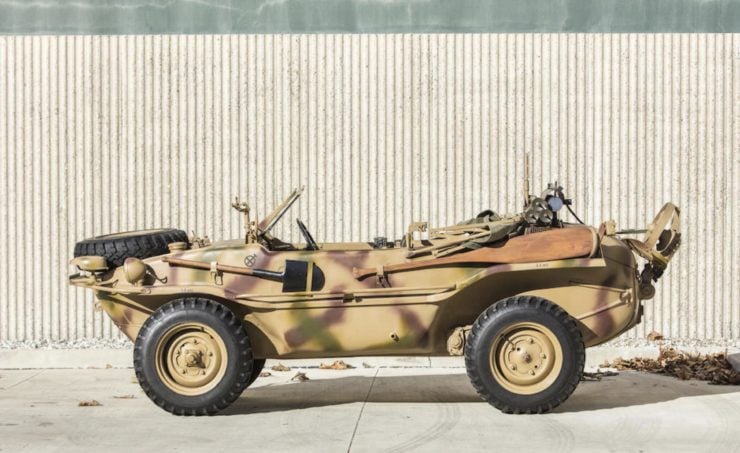 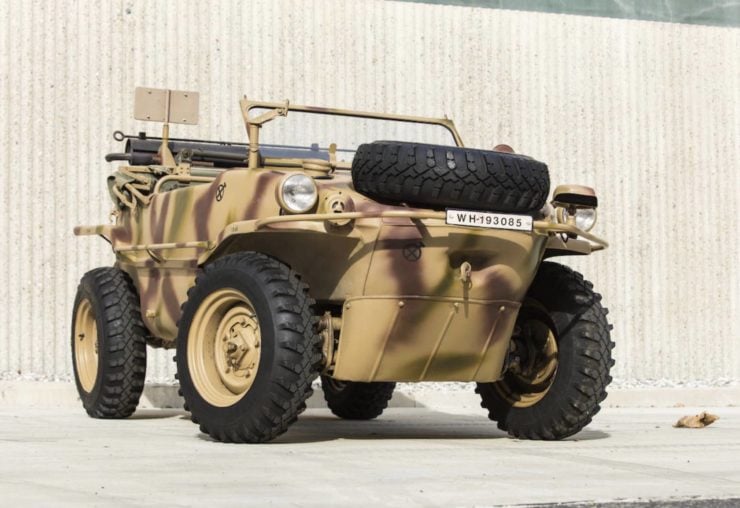 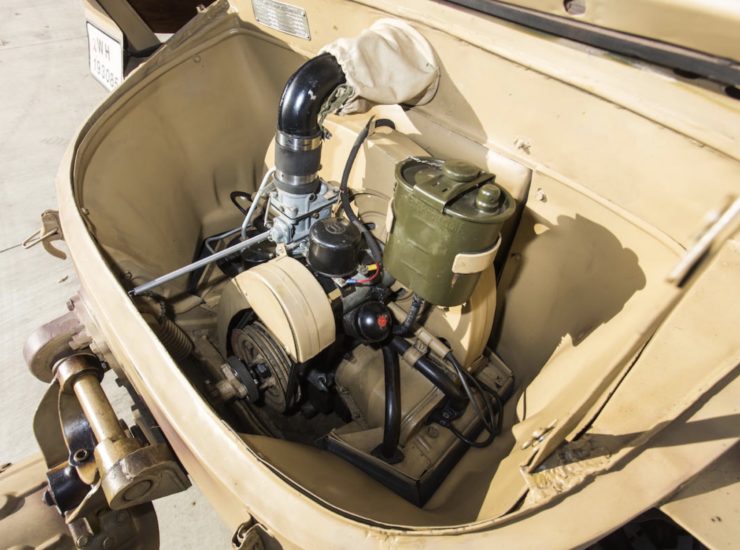 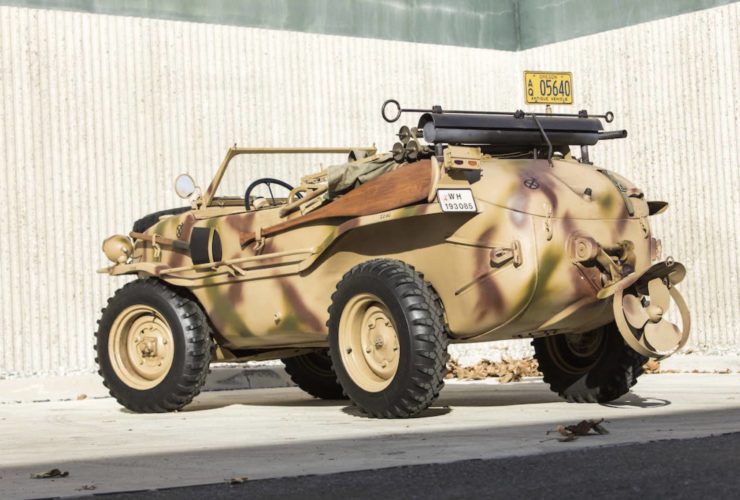 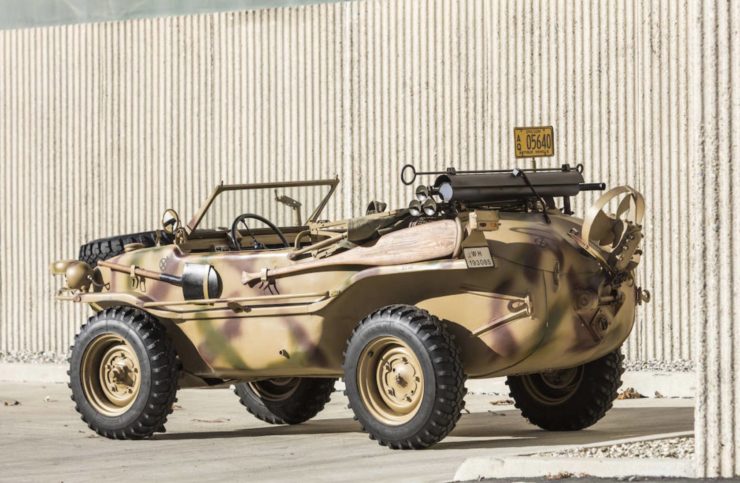 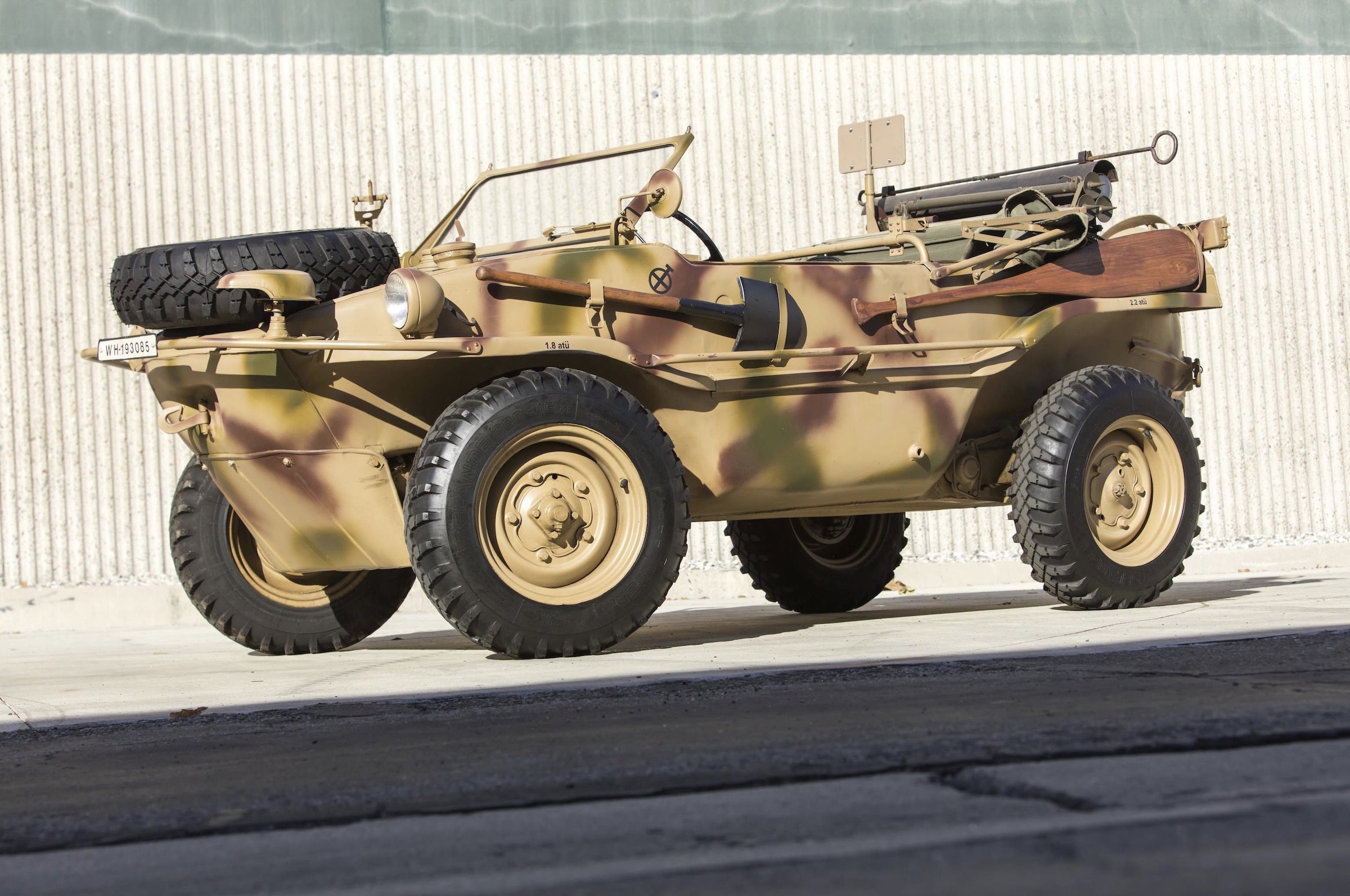