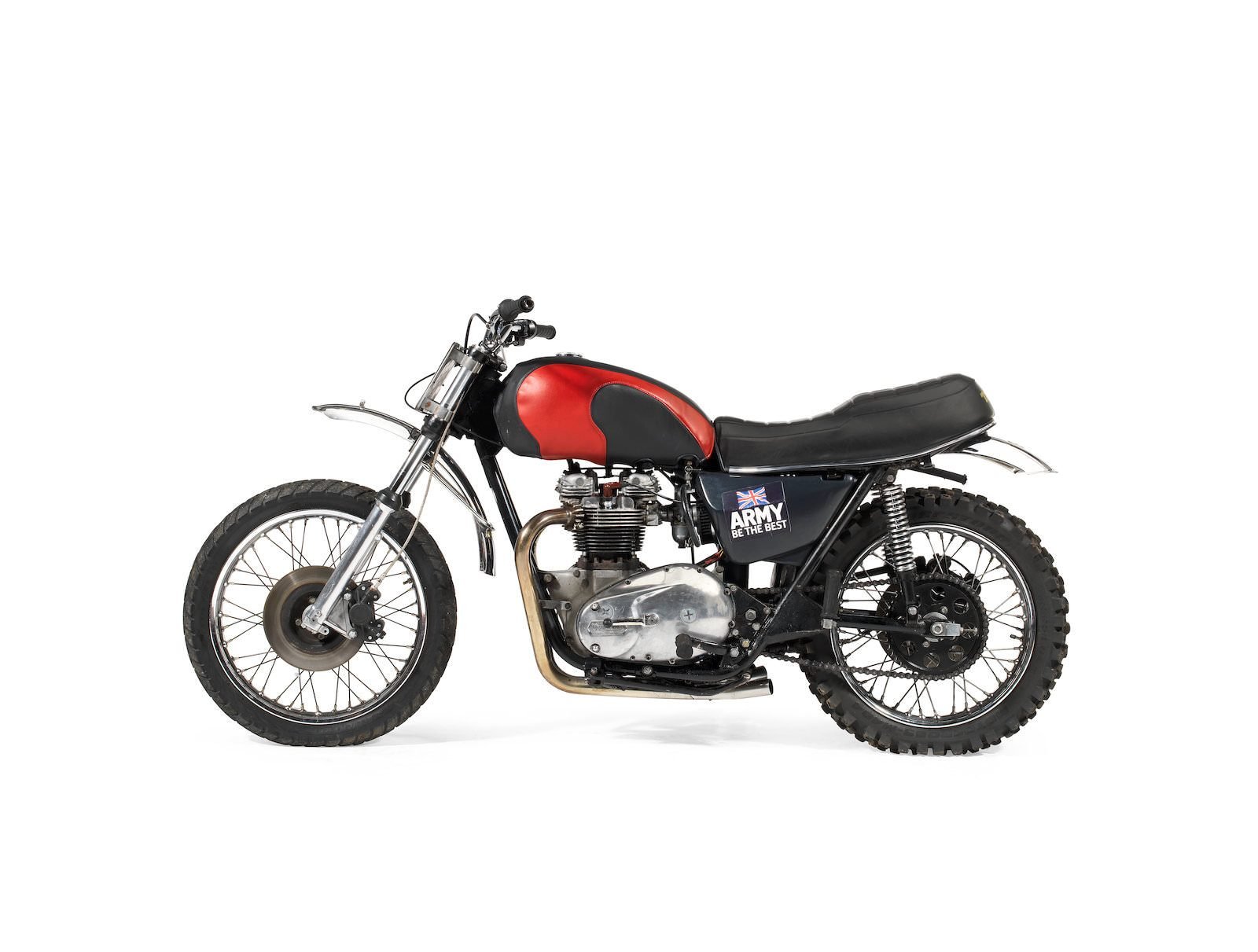 The Royal Signals Motorcycle Display Team is commonly known as the “White Helmets” due to their distinctive white motorcycle helmets, worn by all riders since 1963.

This collection of five customized  Triumph TR7 Tigers has been used by the stunt team since 1999, and they’re now for sale to the general public with estimated prices ranging from £5500 to £8000.

The onslaught of less expensive Japanese motorcycles with oil-tight engines, electric starts, 5-speed gearboxes, and front disc brakes had eaten deeply into Triumph’s marketshare, and the marketshare of other British, Italian, and German motorcycle manufacturers.

Triumph developed the TR7 and T140 Bonneville to counter this Japanese insurgency, and while they weren’t particularly successful, the models were a notable performance improvement over their respective predecessors. 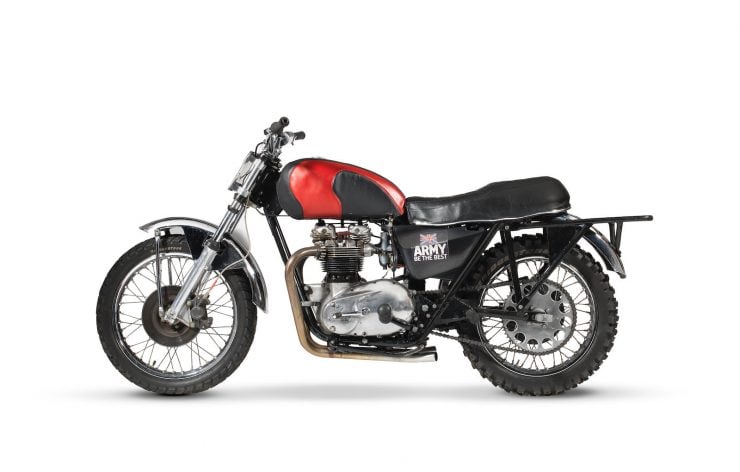 The parallel twin from the previous models was kept but bored out to 724cc initially, then to 744cc soon after. Both models now came from the factory with a 5-speed gearbox and front disc brake as standard, though the vertically-split crankcase still resulted in issues with oil leaks, and the lack of electric start was a big issue for many prospective purchasers – particularly when many of the new Japanese bikes offered them as standard.

The one thing the Triumphs did better than their competition from Asia was handling. Decades of racing experience resulted in an excellent frame, sharp steering, and good suspension – all by the standards of the era of course.

The Triumph Bonneville T140 and TR7 Tiger are now popular with classic motorcycle enthusiasts – they’re not as expensive or desirable as their siblings from the 1960s and 1950s – but they’re faster, they have better brakes, and they have that extra cog in the gearbox that makes highway journeys far more manageable. 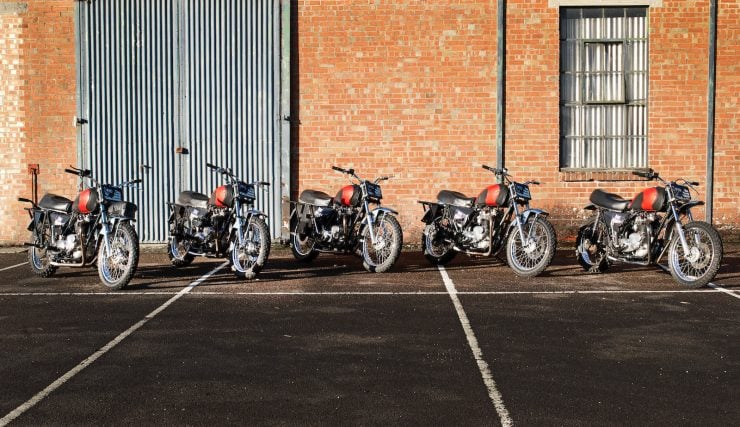 The Triumph TR7 Tigers of The White Helmets

This series of 5 customized Triumph TR7 Tigers have been significantly modified by the White Helmets for use during their stunt display show that would travel around Britain each summer, thrilling crowds with high-speed human pyramids, jumps through rings of fire, motorcycle-based acrobatics, and much more.

All of the bikes keep their stock engine, gearbox, brakes, and front suspension – but the rear shock absorbers have been replaced on four of the five with steel struts to provide a more stable platform. The original fuel tanks have been covered with a distinctive red and black leather cover to provide a more grip, and most of the bikes also feature a rear subframe for carrying additional stuntmen.

Interestingly, the rear sprocket has been replaced with a far larger unit to provide better low speed control, and the original mufflers have been removed to give the bikes a more crowd-pleasing engine note.

All five are now for sale with Bonhams, they’re all going to be offered for sale as separate lots at the Spring Stafford Sale and if you’d like to read more about them you can click the following links to visit their listings: Triumph “25”, Triumph “28”, Triumph “23”, Triumph “27”, Triumph “8”. 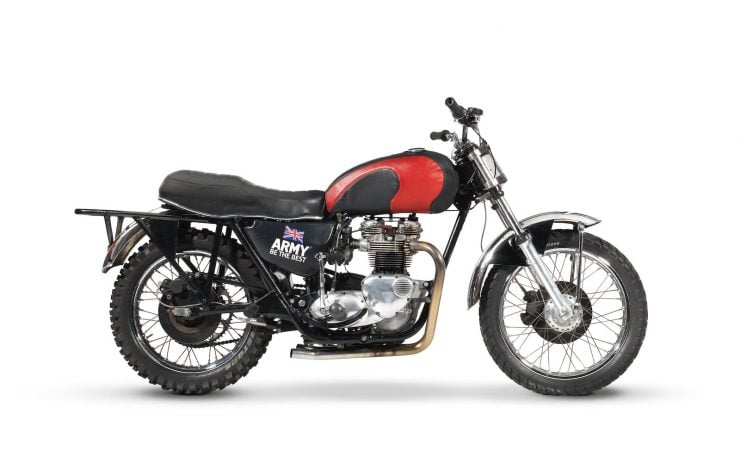 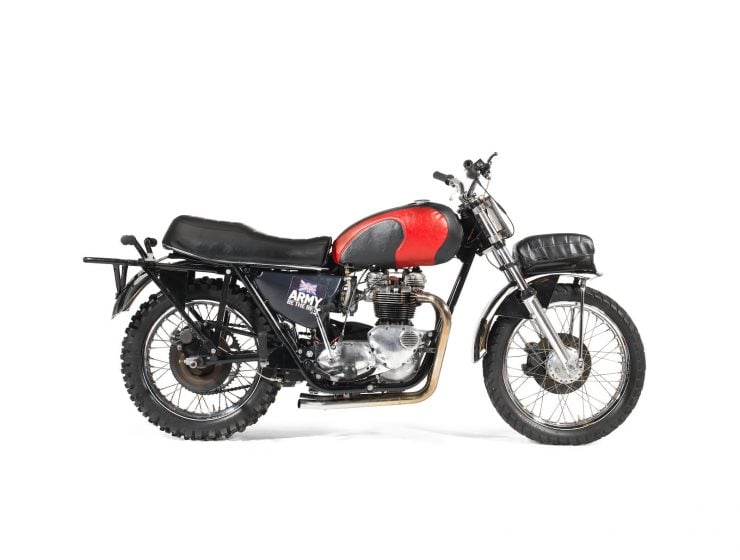 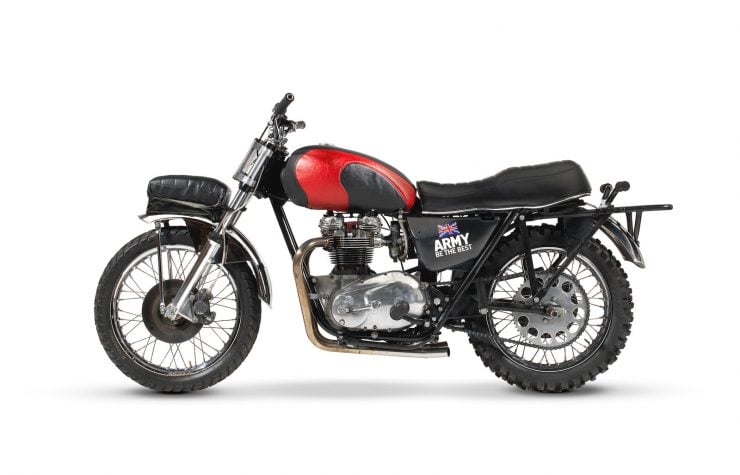 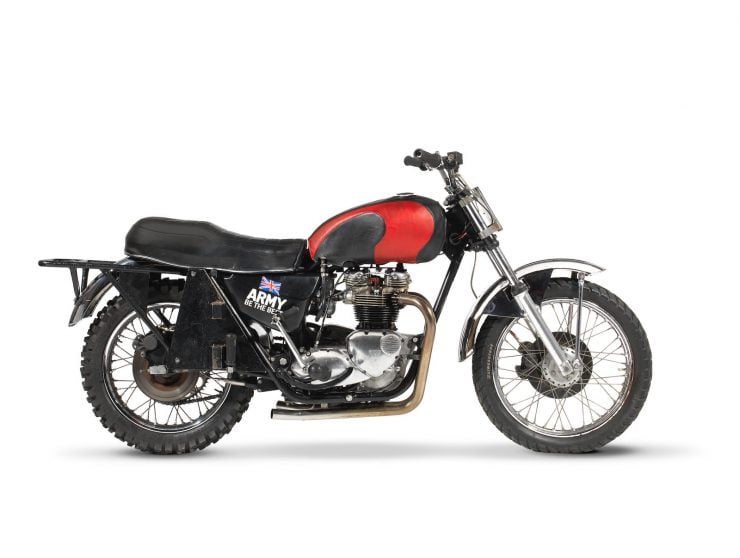 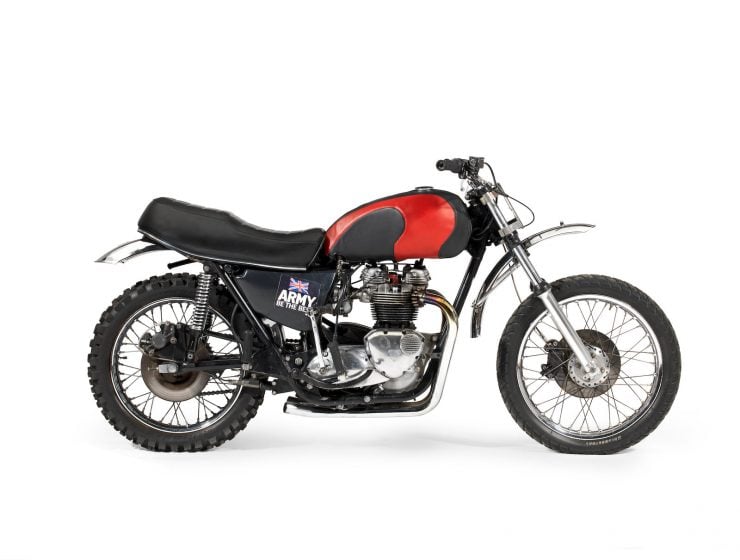 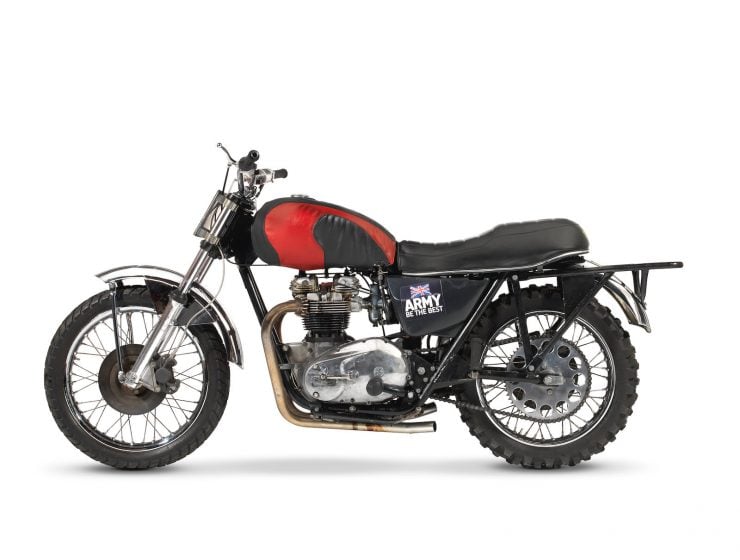 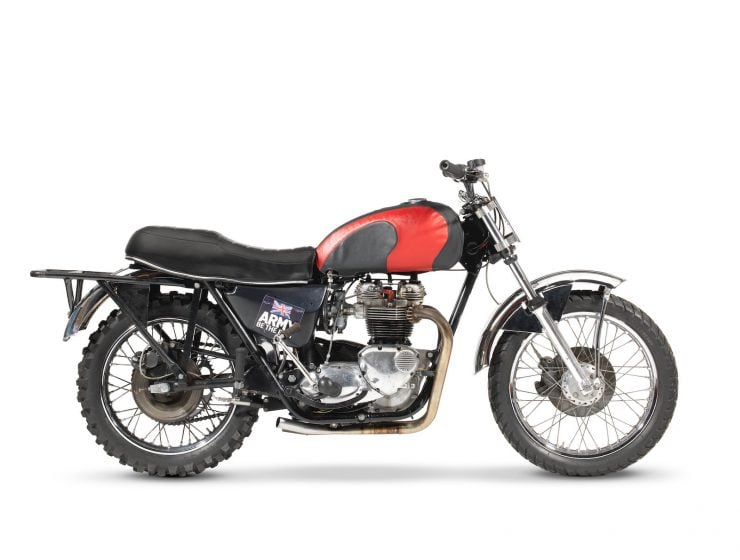 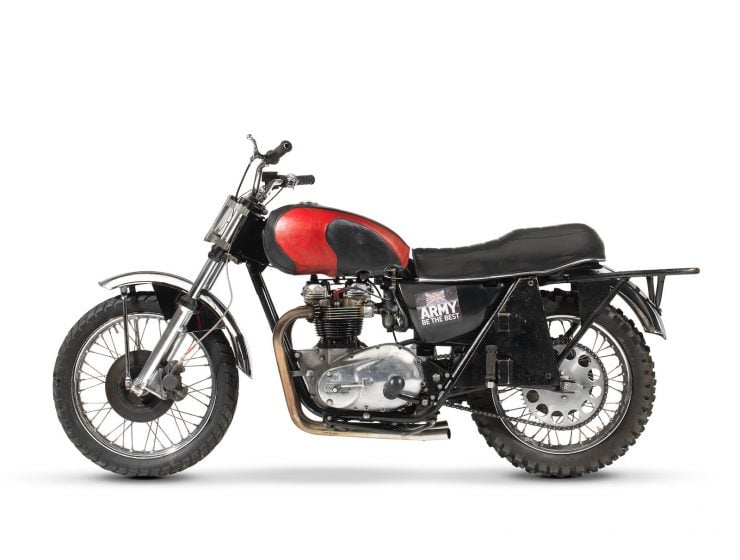 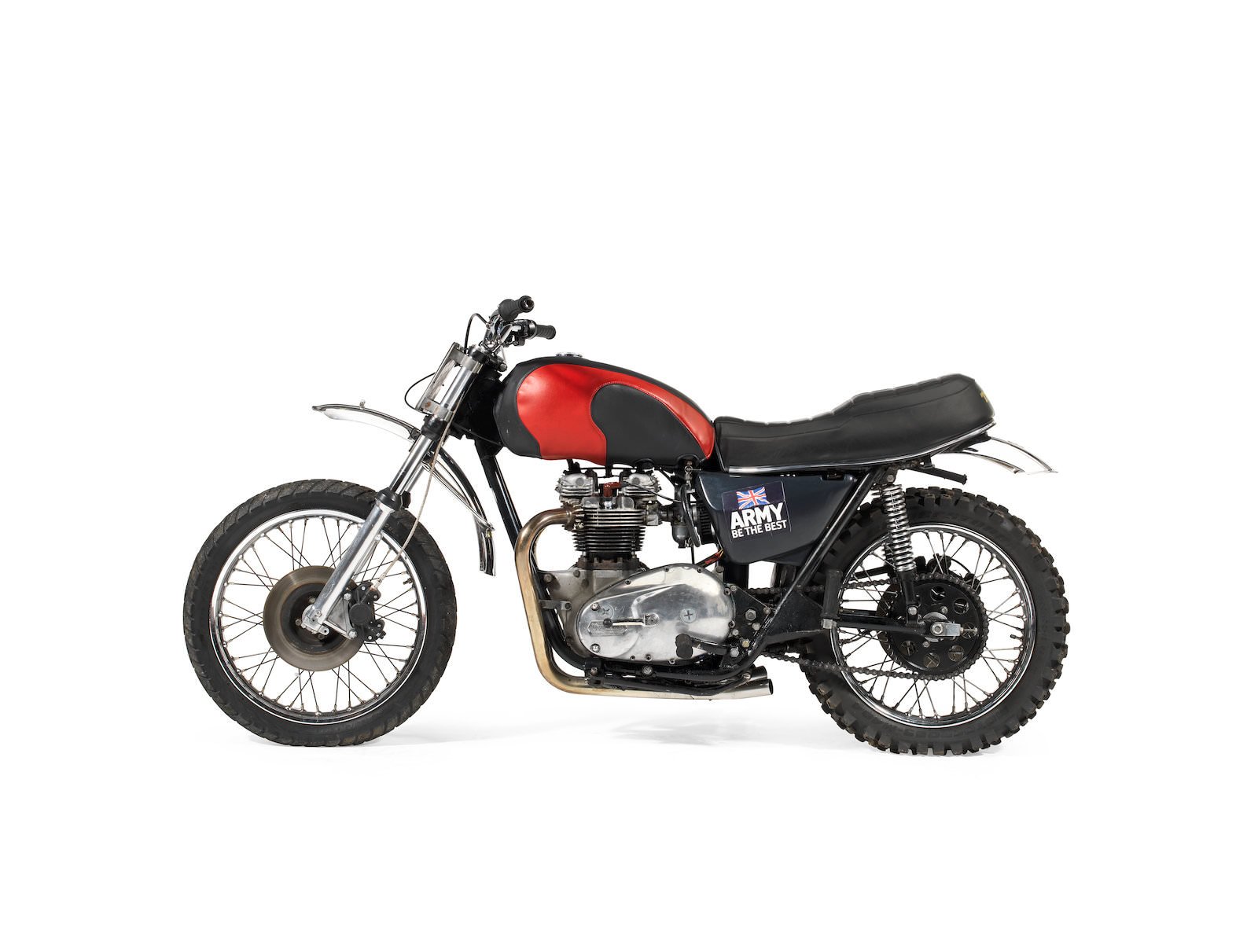