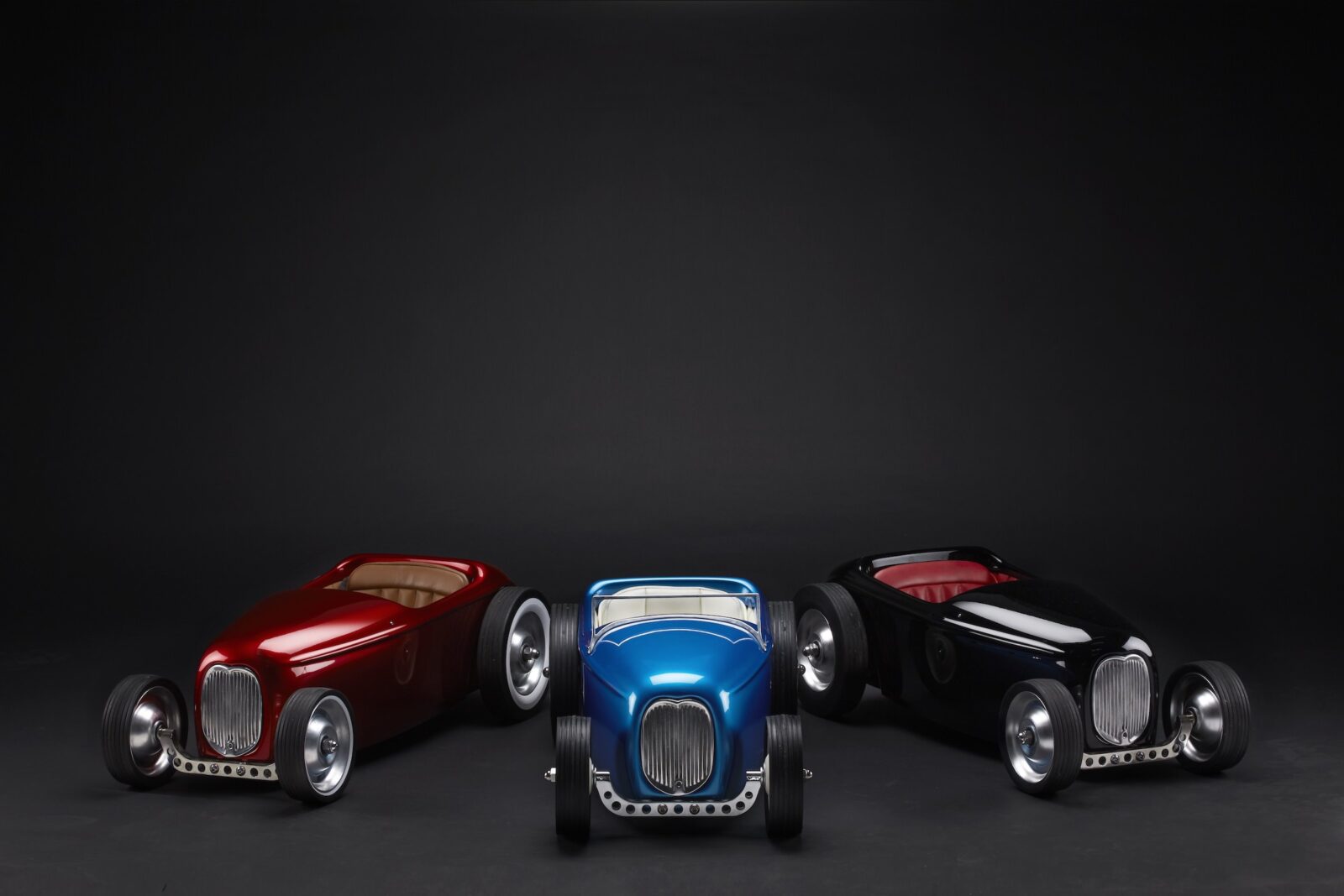 This is the Tot Rod, a bespoke kid’s car designed as a miniature evocation of the ’32 Ford – often referred to as the Deuce and generally regarded as the single most important car in the decades long history of hot rods.

Any parent will tell you that almost all modern children’s toys are built by the lowest bidder to the lowest possible standard of quality. Rather than having just a few toys that last a person’s entire childhood kids often now go through hundreds of toys if not a thousand plus.

When we came across the design for the Tot Rod by Mike Andrews we loved it, so we got chatting to him and the following is what we learned. Anyone with kids (of nieces and nephews) will immediately see the appeal of the Tot Rod, particularly with the push handle added to the back.

What inspired the design of the Tot Rod?

Legacy. I wanted to build something for my son, I wanted it to be a tactile gift that Dad had made, something that in years to come even after he had outgrown it we would all have such a strong emotional connection to it that it would be kept. 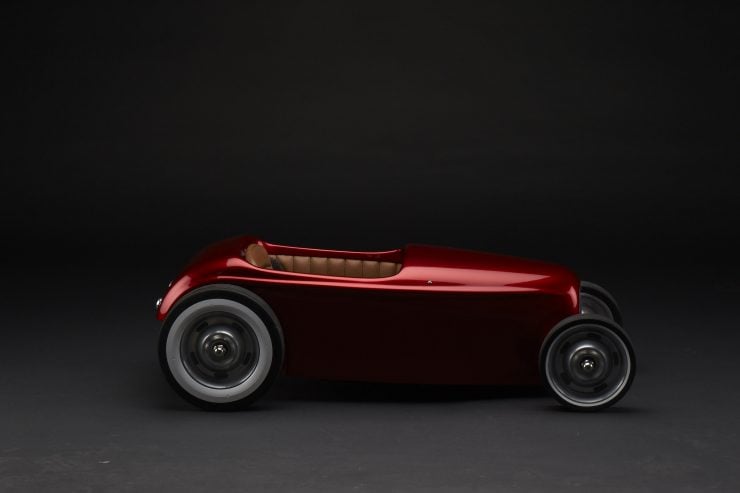 Two years ago I was given the opportunity to become the full time parent to our son (who was 6 months old at the time) what I observed was that toys were seasonal, they are disposable and they are built to last “just long enough”. I still have toys that were given to me as a child and either because of the build quality/ materials or the joy that my parents saw these items give me they decided to keep them.

I feel that today, kids toys don’t last long enough for them to be an intrinsic part of our childhood memories, I also feel that the skill or blind energy that existed in generations past has gone, the ability to fashion a toy from timber in your garden shed has been replaced with plastic that can be purchased instantly or creating imagination has been replaced with phones and tablets.

Who came up with the idea?

During my career I spent most of my days either managing design clients or projects through various manufacturing and brand roles, over the years I was able to observe many talented people at all levels of a construction project, I’d been front row with product designers developing an idea on a piece of paper, through to prototyping and large scale production at home I spent countless hours in my shed teaching myself to build whatever was needed, using the processes I observed during the day, as the projects grew, so did the tools and the blind enthusiasm to think “what next” – eventually teaching myself to build a bike that you shared on Silodrome. 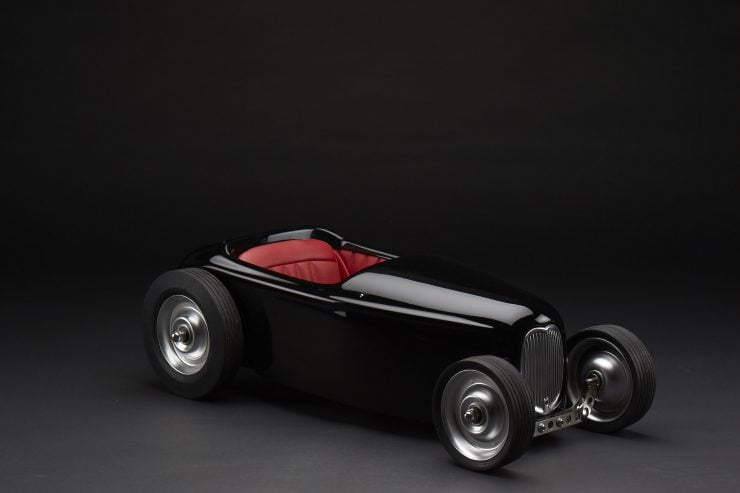 At a local hotrod show a guy was selling fiberglass bodies of a ’39 Willy, not what I’d hoped for but it was a start.

The price seemed fair and when I enquired about a chassis, I was met with the first of many roadblocks, “I dont really care what you do for a chassis, by the body or bugger off” now; people that know me know that when I attempt to weld, things catch fire. it’s a skill I’ve never mastered, but I thought I built a bike with some complicated fiberglass components; how hard could a car be?

I arrived upon the ’32 Ford, I’d always loved the shape and would later be told that a genuine ’32 is the holy grail of hot rods. It looked simply enough. That was the next challenge, the body is famous, rear wheel wells, undercut body. I wanted it to be accurate and I wanted it to feel proportioned and scaled. turns out it’s a pretty complicated shape!

As the body took shape, I shared it with people and quickly people were very supportive, asking if I could make one for them. I realised then, that if I was going to do that I needed to build them in a way that I could scale production if I needed. 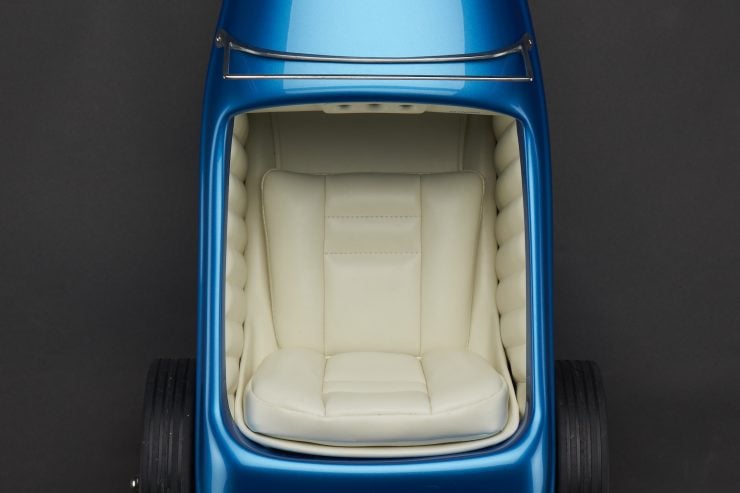 My original concept was to develop this as a kit set with all of the obstacles removed; cant weld? no worries chassis is sorted for you! Can’t fiberglass? no problem that’s sorted too. I wanted to provide a solution that could be assembled with an allen key and a spanner. How you decided to paint it and upholster it was up to you and would form part of that emotion currency that would make your Tot Rod like no one else’s – and thats how the Tot Rod Shop was born.

How is the Tot Rod made?

There are a number of materials utilised and where possible the intrinsic value of human input is chosen over machine. I can answer emails but when it comes to design software I am completely illiterate. The drop axle that forms part of the overall design was created in CAD (Cardboard Aided Design) I drew this by hand with a ruler, compass, and a draughtsman’s stencil – this was then scanned by the laser cutter and cut.

The grill is sand cast aluminium, individually poured from the pattern I made from brass strips and modeling clays, the windscreen and tail light bezels use a very old manufacturing technique called casting, all of these pieces are finished by me, by hand in the shed, the fiberglass bodies come from a 5 piece mould and are hand laid due to the complexity of what appears to be a simple shape. The chassis features a hot rod theme and has bent tube and creates a seamless mount system for the body. 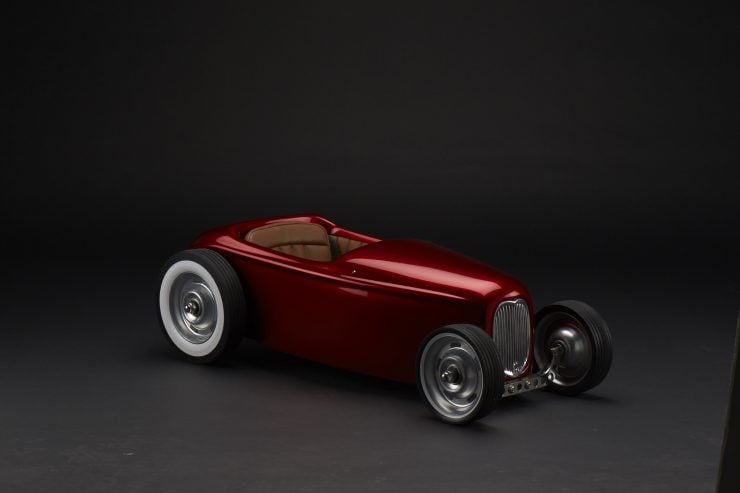 On completing the master I work closely with some very skilled people to produce each element, each component is hand collected by me, sanded, cleaned and up polished using basic tools, elbow grease and time, the human touch makes each one individual and I really like they story that this tells.

Are they for sale, and if so how much?

Yes, I recently hand delivered my first custom built car for Bryce Green of Kindig It Design, it was an amazing project to help build a car that will be in his family for many years to come and to see the reaction of Bryce, Dave Kindig, and his team was mind blowing for me.

If the client wants the car to match their real one we can do that too! The build process is documented in conjunction with the owner and published via Instagram. 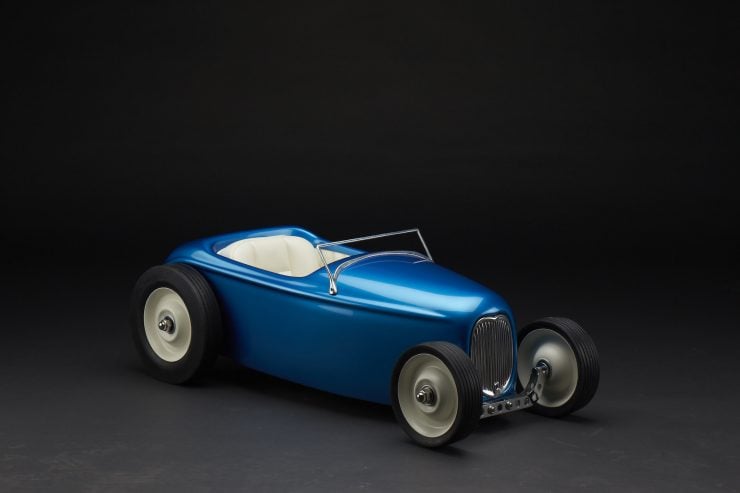 What ages/sizes are they suitable for?

I built these for my two boys, the oldest is 2.5 years old and the youngest a year, I’d suggest that as soon as your child can sit up and support their own neck then they would be ready to go, my eldest is now at the limit and will take his shoes off to keep getting into it! 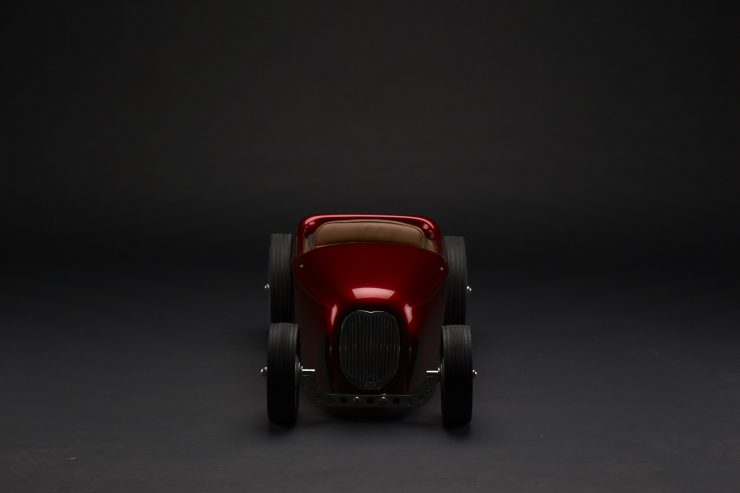 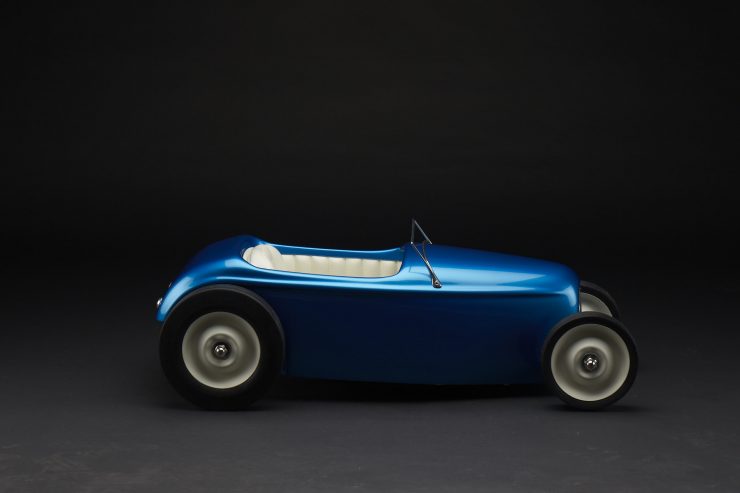 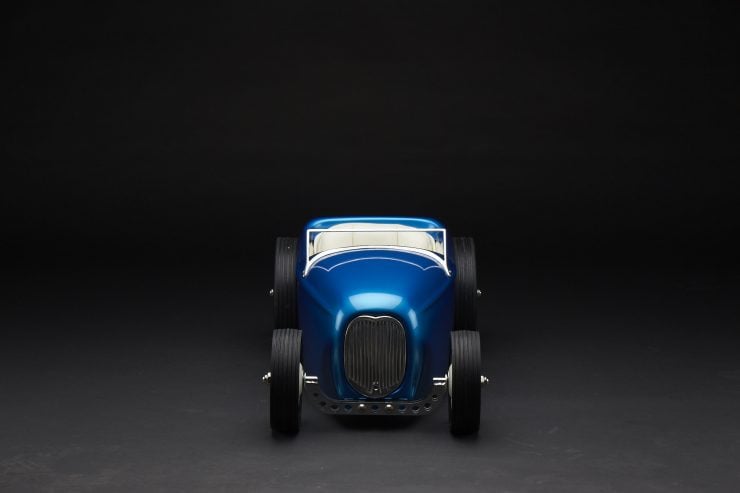 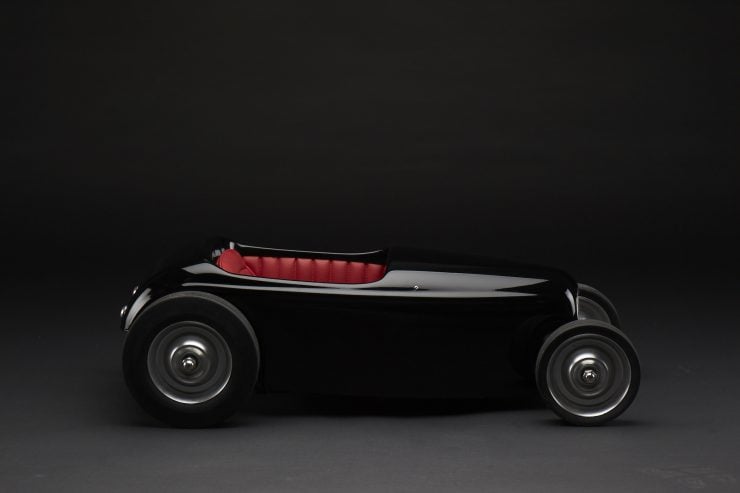 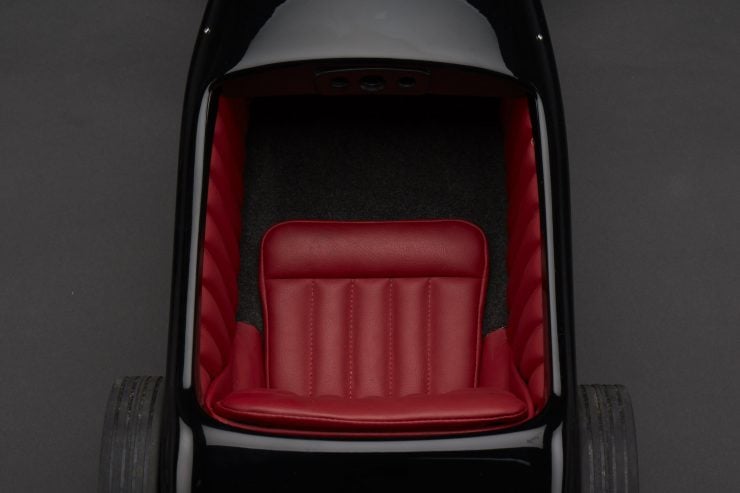 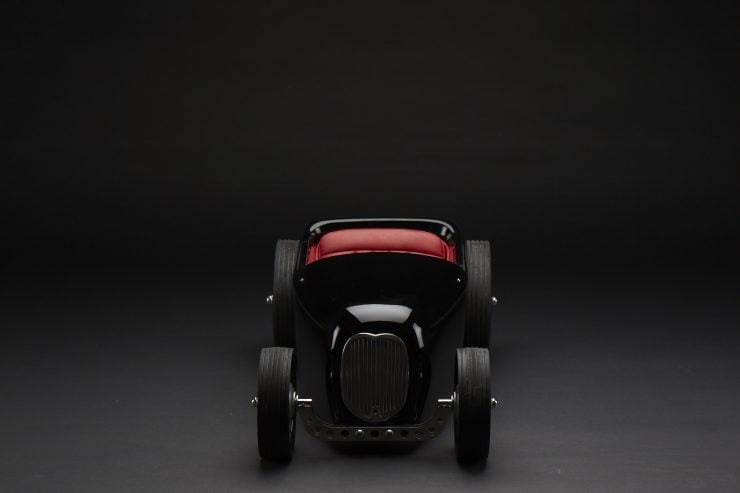 There can be little doubt that this is the best camper van for sale in the world right now, there are better equipped campers out there of course, but you can’t beat this one for kerb appeal. This is the only Thunderbird 2 van that was ever built, it’s in fantastic condition throughout and thanks…

The Holden Dealer Team, commonly known as HDT, is a legendary racing team in Australia that fielded some of the country’s greatest racing drivers from the late 1960s through the ’70s and well into the ’80s and beyond. Holden is known around the world as Australia’s largest automaker, but back in the 1960s and ’70s Australia…

This documentary about the history of BMW covers everything from the earliest days of the company from 1916 onwards when they were in the business of making aircraft engines. BMW would famously begin making motorcycles before they started making cars, and it would be motorcycles that would keep the company in business at times during… 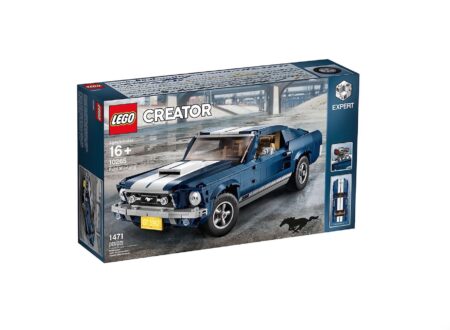 The new Lego Ford Mustang model features 1,471 parts and measures in at 3” (10 cm) high, 13” (34cm) long and 5” (14 cm) wide. It can be built in a number of different ways including with an optional supercharger, side exhausts, a boot lid spoiler, and even with a nitrous tank in the trunk…. 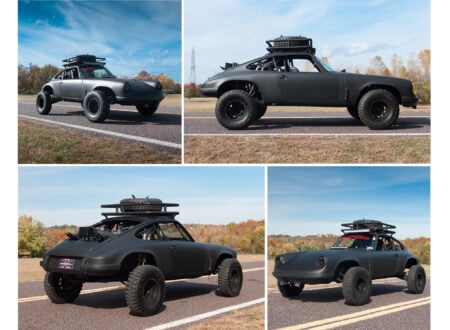 This unusual off-road racer started life as a 1969 Porsche 911, its early life is largely lost to history but what we do know is that the well-known classic car hunter Michael Lightbourn discovered it, bought it, then set to work turning it into a one of a kind Baja racer. Michael Lightbourn – The…