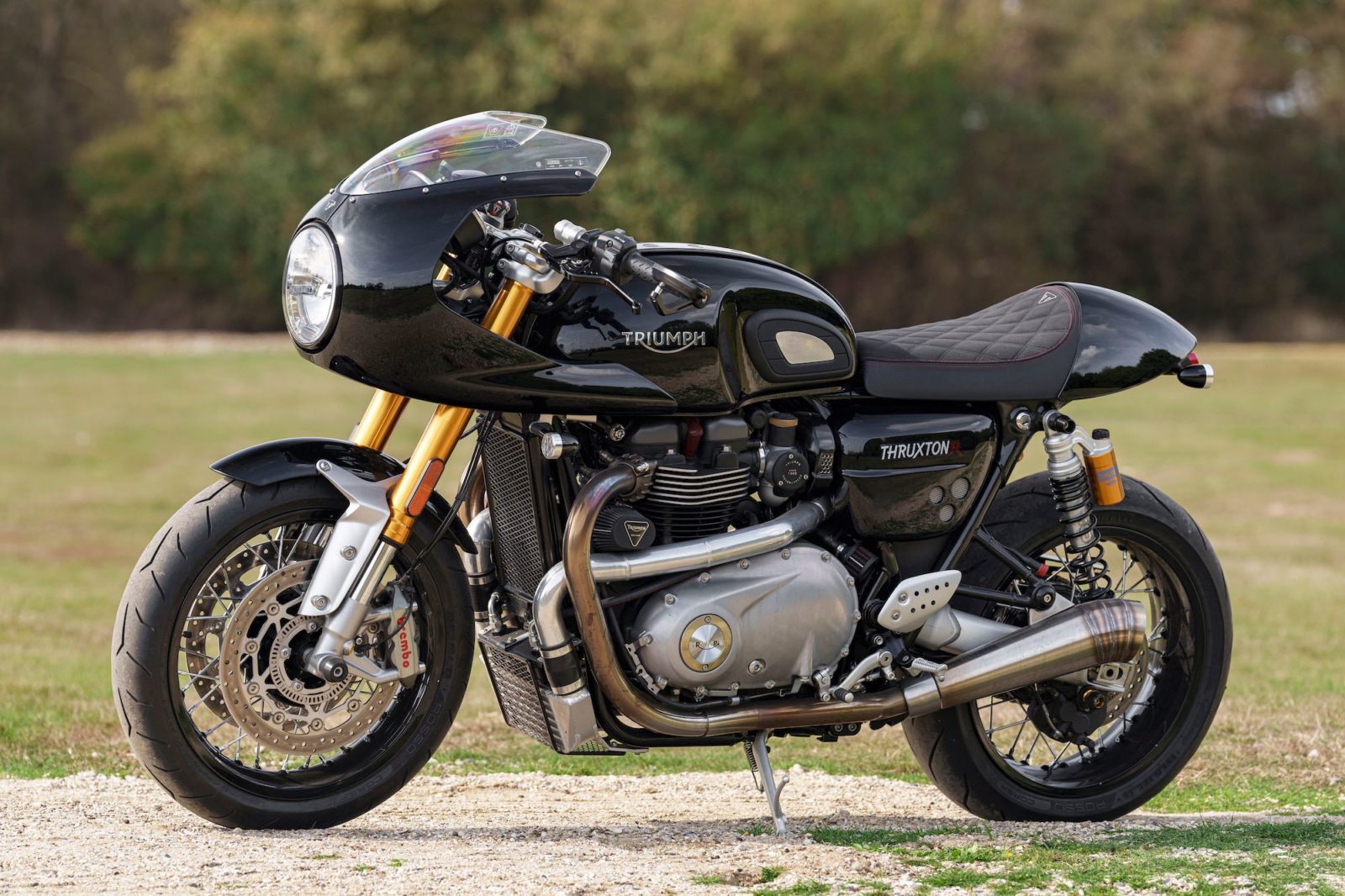 This Triumph Thruxton R is one of just three that were fitted with a Rotrex supercharger by the factory – the other two remain in the possession of Triumph Motorcycles and are on display at their headquarters in England.

Aside from the supercharger this Thruxton R also has an air-to-air intercooler, forged pistons, and Power Commander system – as a result it now makes 162 rear wheel horsepower, a significant increase over the 96 bhp of the original.

When the all-new Triumph Thruxton R was released in 2016 it significantly raised the bar in the world of modern classic motorcycles, it won the Motorcycle News (MCN) “Best Retro” award in 2016 and then again every year since. 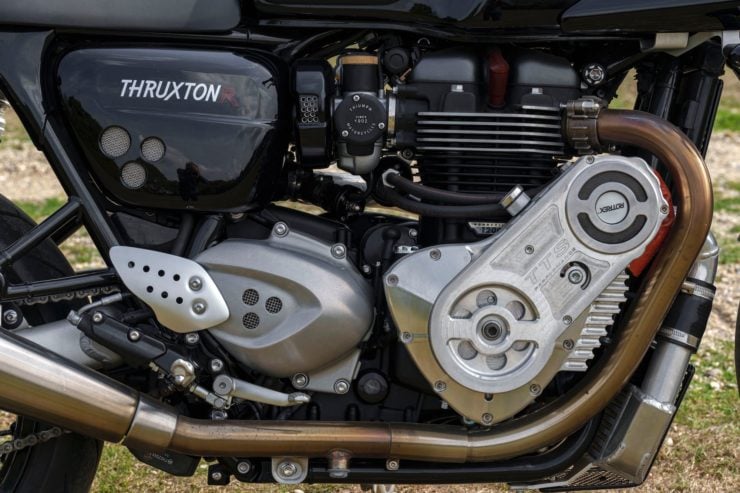 Here the Rotrex supercharger can be seen bolted on to the timing side of the parallel twin, it sends the intake charge through an intercooler and then into the engine.

When the engineers at Triumph set out to develop the Thruxton R they essentially started with a blank slate. They developed a stiff new tubular steel duplex cradle frame that uses the engine as a stressed member for improved rigidity.

Gold anodized Showa “Big Piston” upside down forks were fitted up front, paired with twin fully adjustable Öhlins shock absorbers in the rear. Twin Brembo monobloc brakes were installed along with a single disc in the rear, and the factory fitted tire was the sticky Pirelli Diablo Rosso Corsa.

With the chassis, suspension, and brakes all sounding top shelf the only thing left to talk about is the engine. Triumph throughout their history are most famous for their parallel twins, it was Triumph’s Edward Turner who launched the Triumph Speed Twin in 1937 and popularized the engine configuration after all.

The Thruxton R was fitted with a liquid-cooled single overhead cam parallel twin with a punchy 270º crank angle and four-valves per cylinder. The displacement is 1200cc with a bore and stroke of 3.84″ x 3.15″ and a compression ratio of 11.0:1. 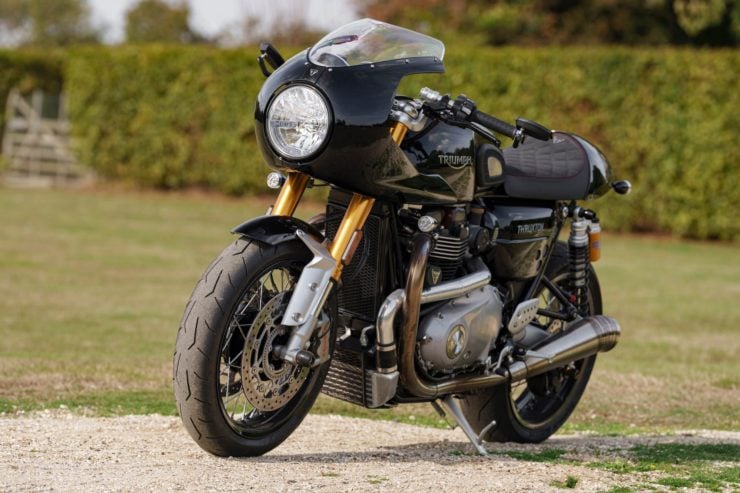 If you look under the radiator here you’ll see the discreet air-to-air intercooler that helps lower intake charge temperatures back down to more reasonable levels.

Unlike the earlier carburetor-fed engines this one has modern multipoint sequential electronic fuel injection and it produces 96 bhp at 6,750 rpm with a hefty 82.6 ft lbs of torque at 4,950 rpm.

In reviews when it was first released the Triumph Thruxton R seemed to impress everyone, even the hard-nosed superbike types who usually scoff at any motorcycle with fewer than four cylinders or 125 bhp.

The model has remained a top seller for the British motorcycle manufacturer for six years and counting, with discreet upgrades along the way to keep it up at the tip of the modern classic spear.

As noted in the introduction, the Thruxton R you see here is one of just three in the world that has been built to supercharged specification by the Triumph factory in England. Of those three, this one is the only one in private hands, and it’s the most powerful of them all thanks to some additional modifications that were put in place by Triumph in Portsmouth. 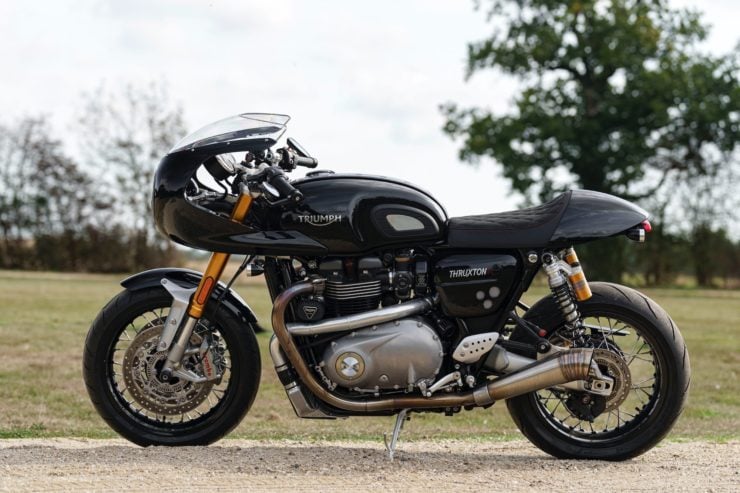 The addition of the additional components is discreet, in fact from the left side of the bike the only real giveaway is the glimpse of intercooler and its pipe to the intake.

Originally all three of the bike were fitted with Rotrex superchargers paired with air-to-air intercoolers and a bespoke exhaust that boosted power up to 139 hp at the rear wheel.

The Thruxton you see here then later had forged pistons and a Power Commander system installed that further increased power to 162 hp and a remarkable ~125 lb ft of torque – all measured at the rear wheel.

This bike is now being offered for sale in fully road-legal condition on Collecting Cars out of Essex in the United Kingdom. If you’d like to read more about it or register to bid you can visit the listing here. 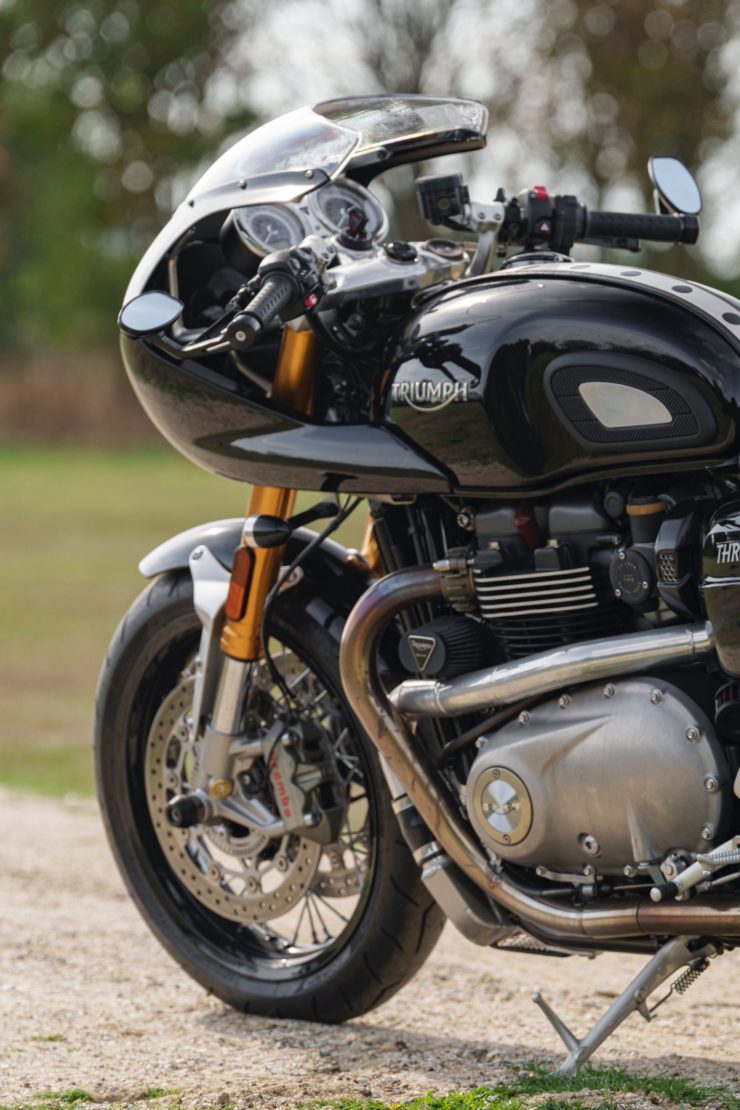 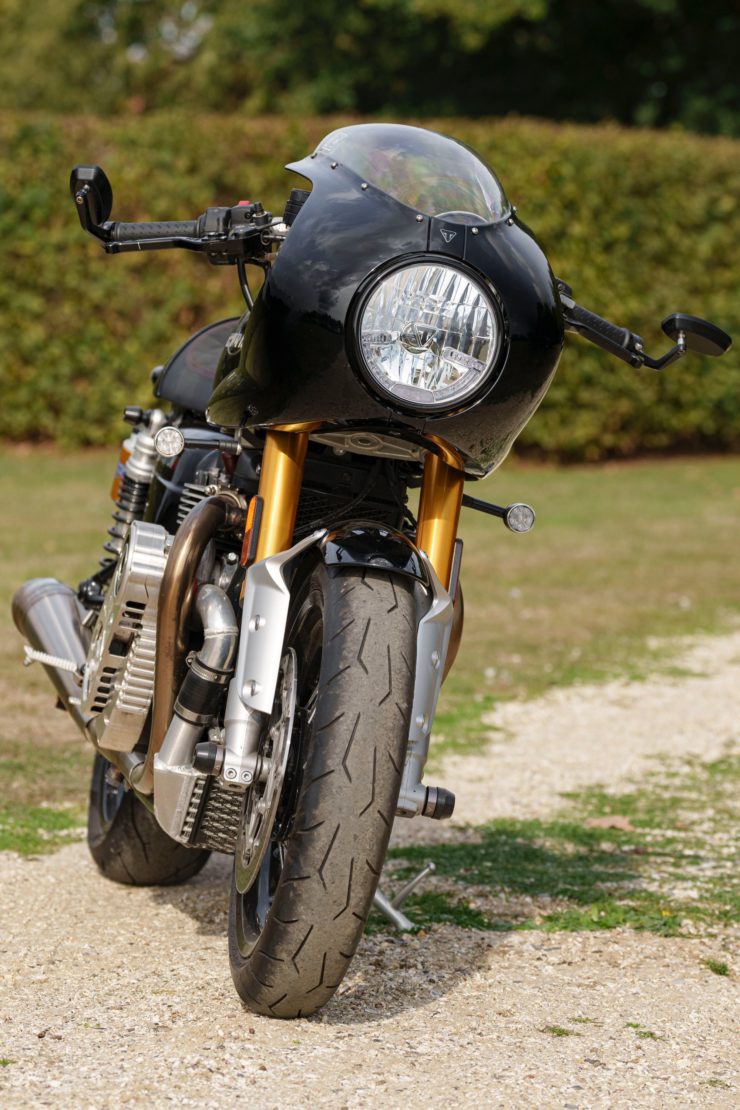 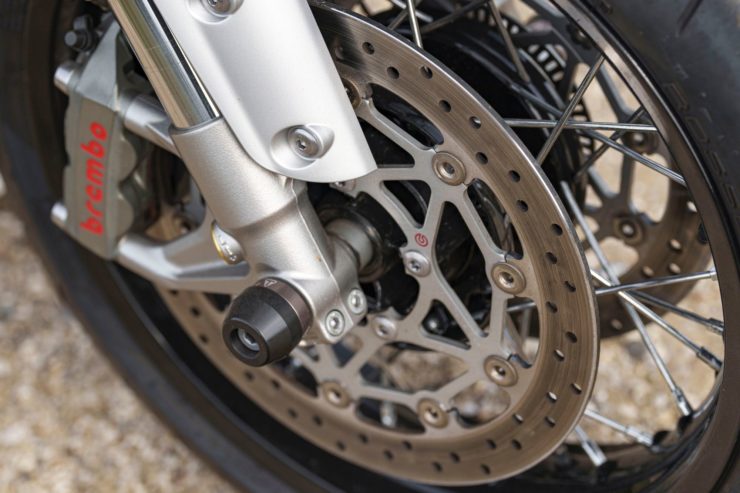 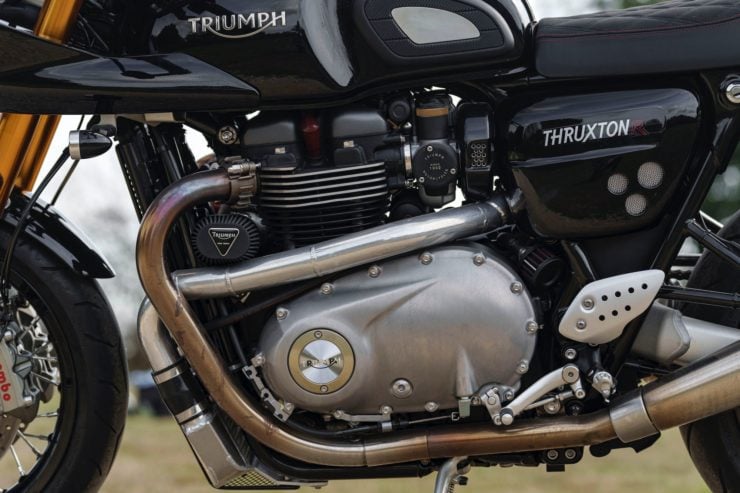 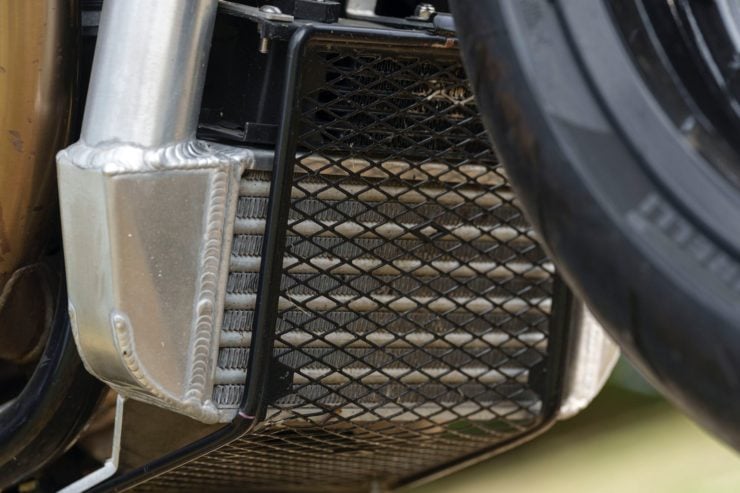 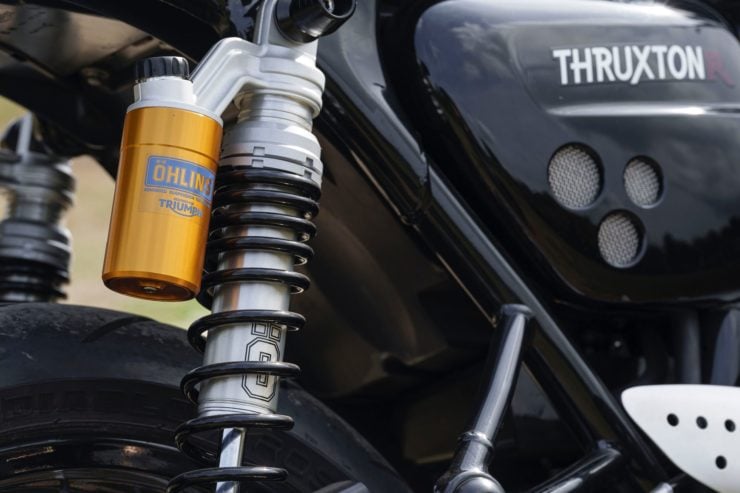 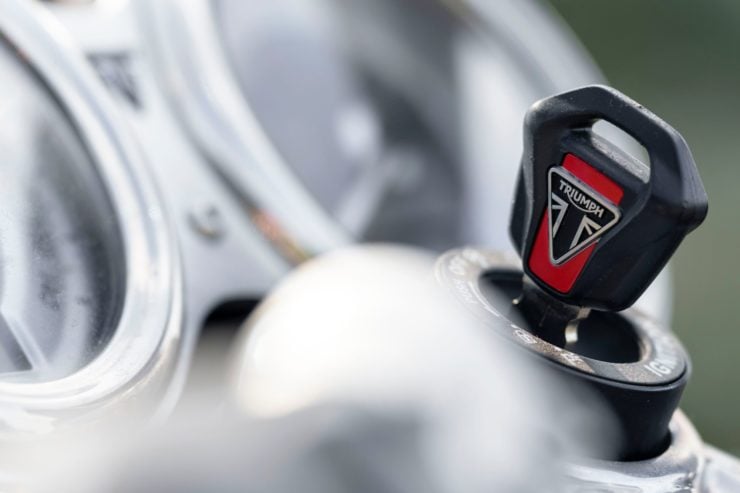 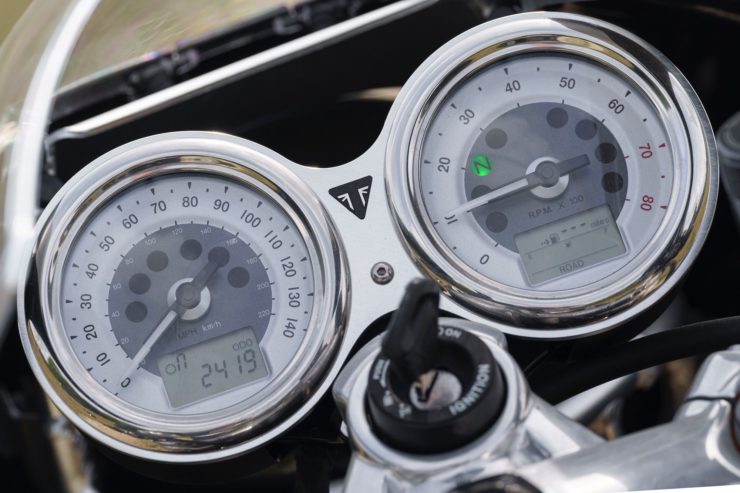 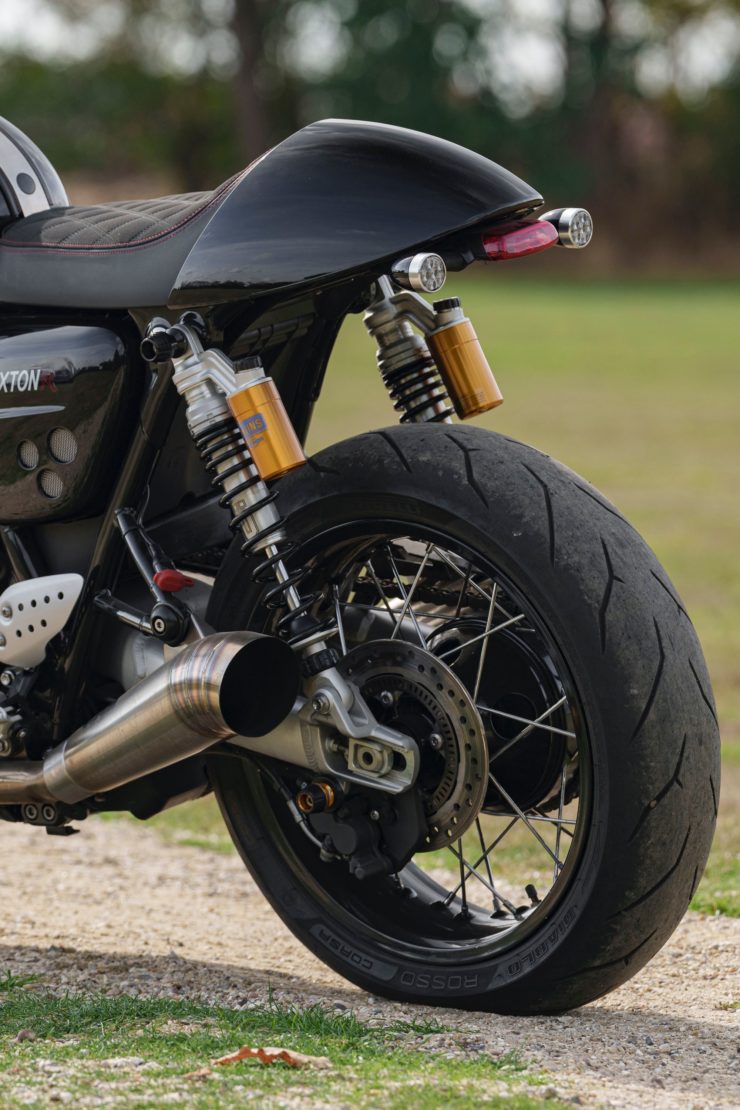 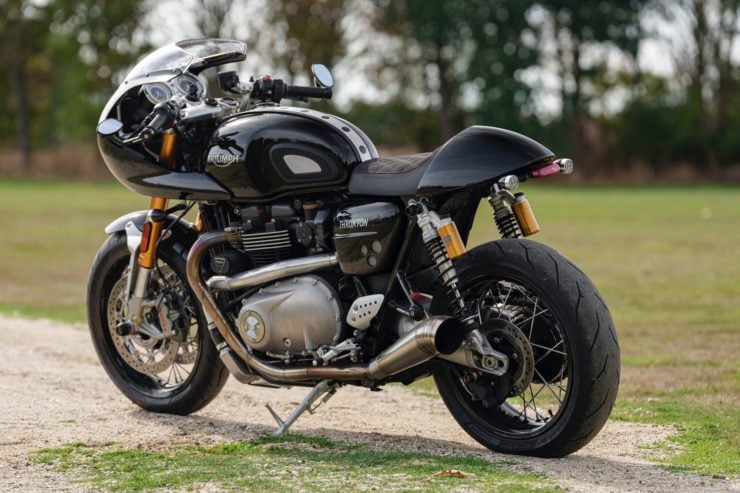