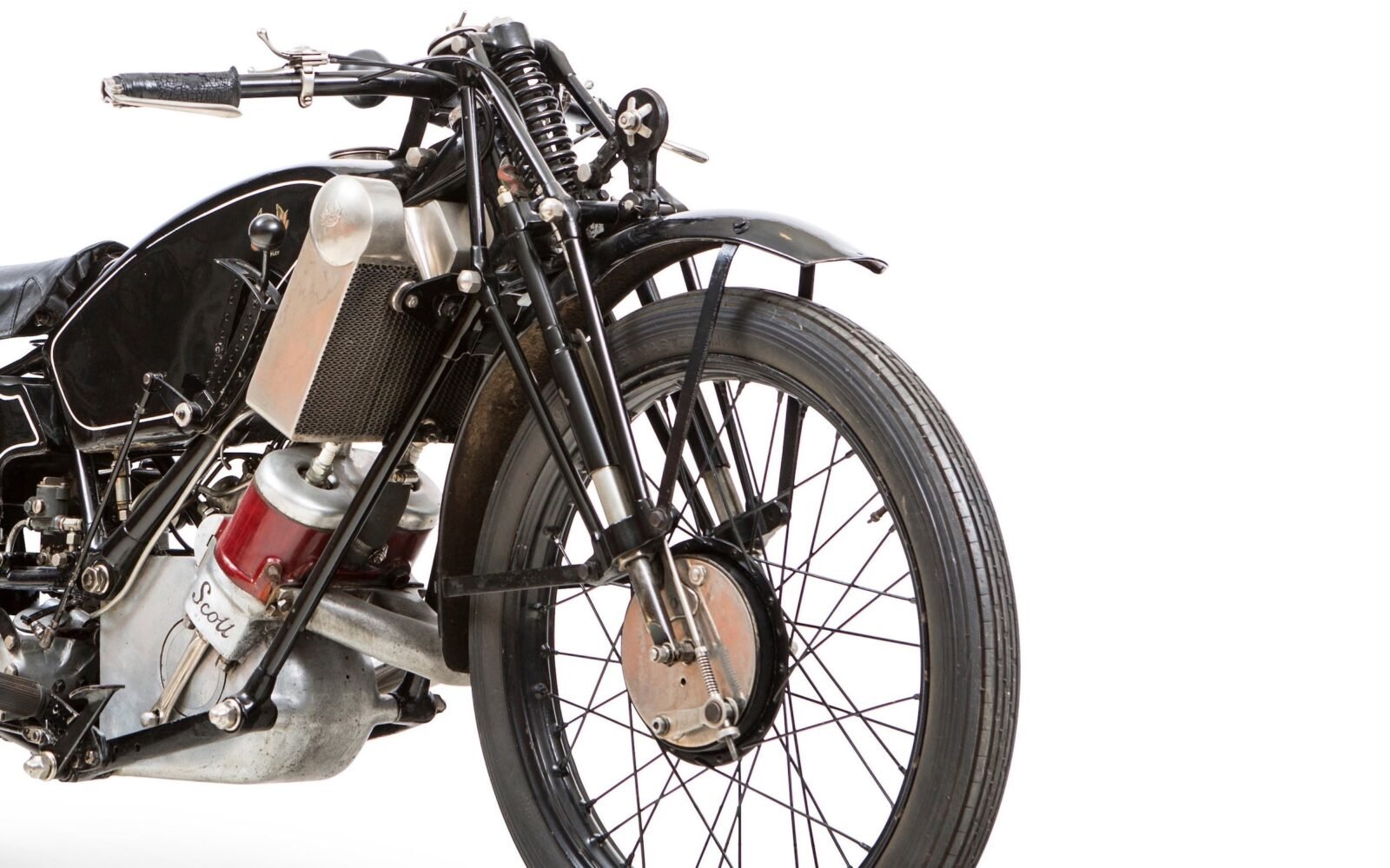 The Scott Flying Squirrel is almost certainly the most famous motorcycle made by the revered British marque, though it’s hard to tell if its fame comes from its brilliant name, or from its remarkably advanced engineering (for the time).

The motorcycle you see here is a Flying Squirrel racing prototype of sorts, it was one of three new Scotts built to compete in the 1926 Isle of Man TT, and the improvements incorporated into these three bikes rolled into the production Flying Squirrel that would be launched at the Olympia Motor Show later in 1926. 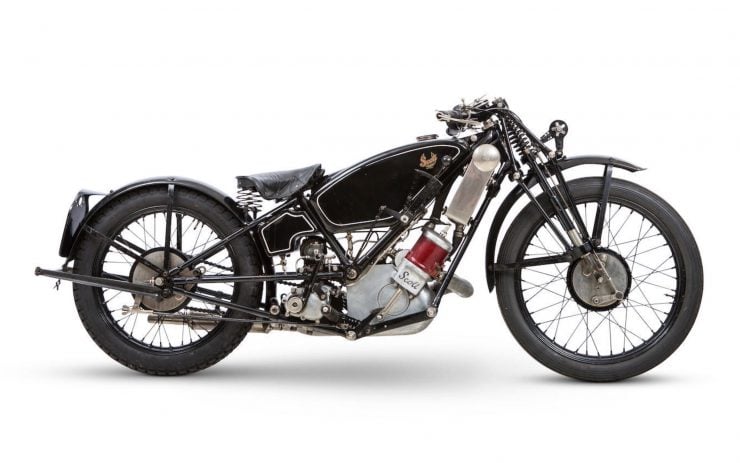 It’s hard to adequately explain just how far ahead of the curve the Scott Motorcycle Company was when they released their first production model in 1908.

It was a liquid-cooled, two-stroke parallel twin with deflector pistons, a lightweight duplex frame, telescopic forks, and a two-speed transmission. The engine was slung low in the frame to give a low centre of gravity, and the engine was also used as a stressed-member.

This is a spec-sheet that wouldn’t look out of place describing one of the 500cc Grand Prix bikes that would rise to dominance in the 1970s and carry on well into the 1990s (well, with the exception of the two-speed gearbox of course). 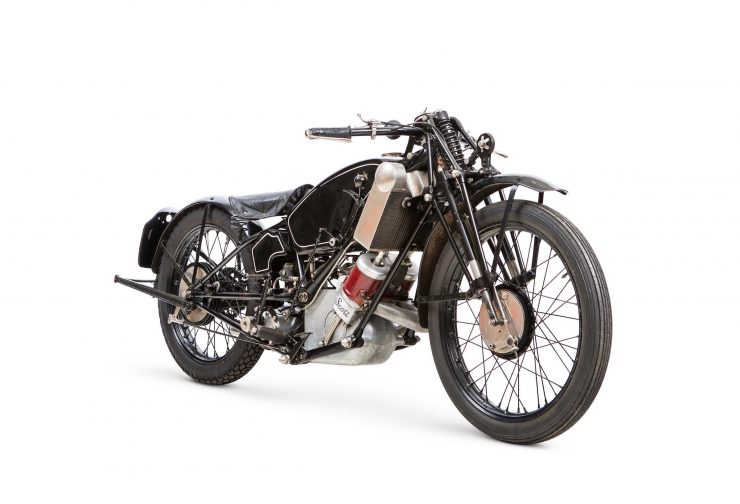 The Scott company was founded by Alfred Angas Scott, that’s a name you should almost certainly know if you’re interested in motorcycle history, as it was Scott who invented and/or patented the kickstarter, monoshock suspension, rotary inlet valves, drip-feed lubricators, centrestands, and perhaps most importantly, his patented two-stroke engine designs still form the basis of modern two-stroke engines.

When not designing motorcycles Scott was an avid spelunker (cave explorer), sadly it was a hobby that would lead to his early death at the age of just 48. He was piloting one of his motor vehicles home after a day of caving in wet clothes, and it led to him contracting pneumonia and dying.

Scott wouldn’t live to see his belief in the two-stroke engine (and many of his own designs and patents) go on to dominate both on and off-road motorcycle racing, and remain dominant until emissions restrictions proved to be their undoing. 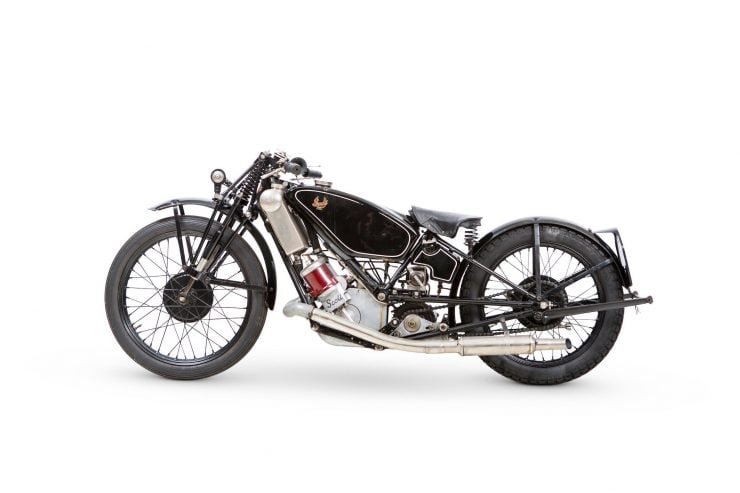 The Scott you see here is an original Isle of Man TT racer from 1926, three bikes were sent to the island for the races that year accompanied by riders Harry Langman, Ernie Mainwaring, and Jack Welsby. Langman and Mainwaring were both out on lap one, but Welsby rode this bike to an 18th place finish by the time the checkered flag fell on the seventh lap.

Years later Welsby wrote to Bob Currie who published the following account of Jack’s race in “The MotorCycle” on the 18th of April 1957:

“On the third lap, he recalls, he took the jump at Ballig Bridge at too high a speed, and the resulting jolt on landing stripped every tooth from the second-gear pinion. From then on the Scott was ridden in top gear only, a feat which placed quite a handicap on braking and cornering. Ramsey had to be negotiated in short, sharp skids, while Welsby was able to make the Mountain climb only by playing tunes with the clutch, which he fully expected to burn out at any moment. However, it was strongly constructed and stood the racket with only minor protest.”

The same article tells us that in the practice session “Welsby was timed at 92.2 mph on the Sulby Straight, and the drop to Hillberry was made at 107 mph.”

The bike is now due to be sold by Bonhams at the Alexandra Palace Sale on the 23rd of September, with an estimated hammer price of £30,000 to £40,000. If you’d like to read more about it or register to bid you can click here to visit the listing. 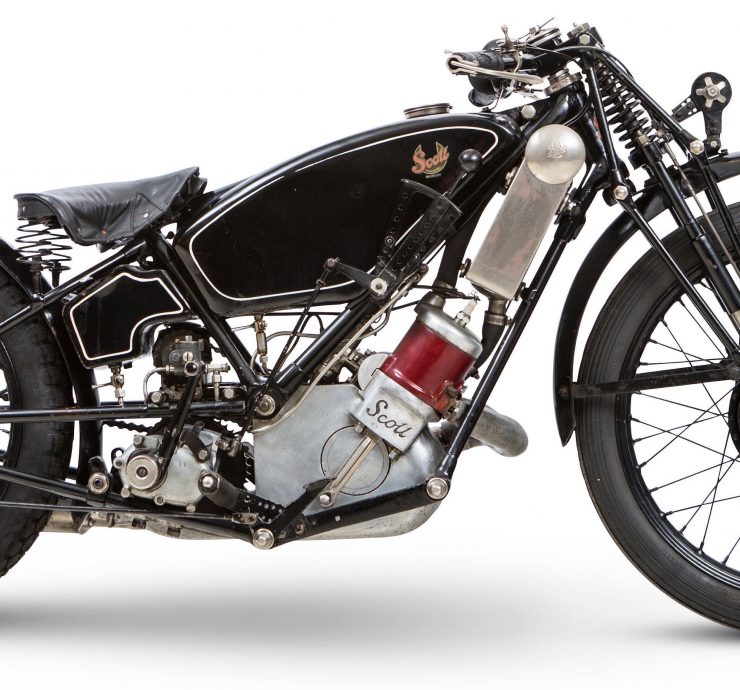 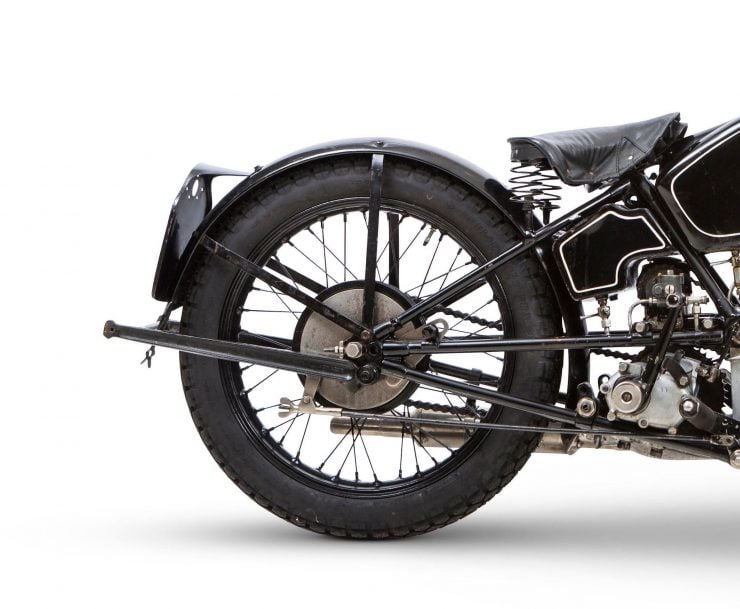 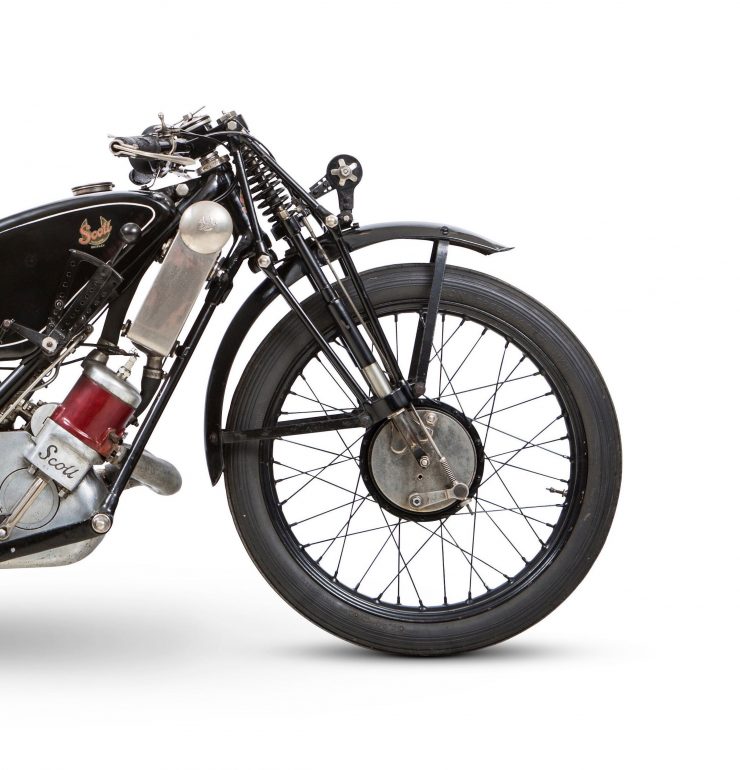 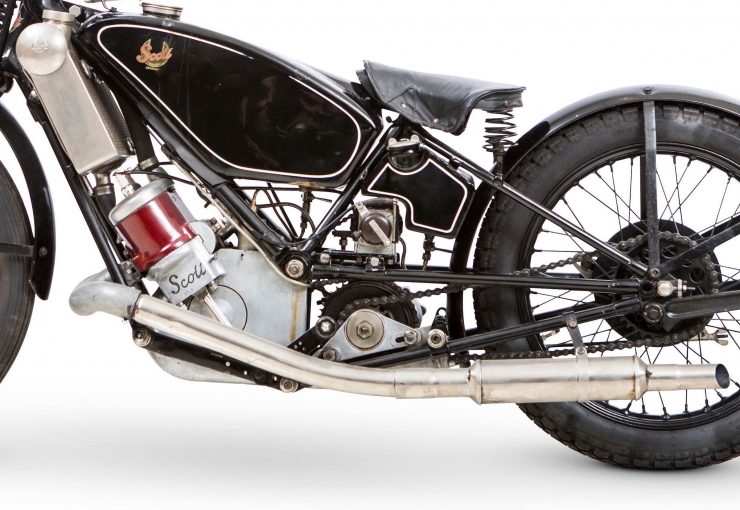 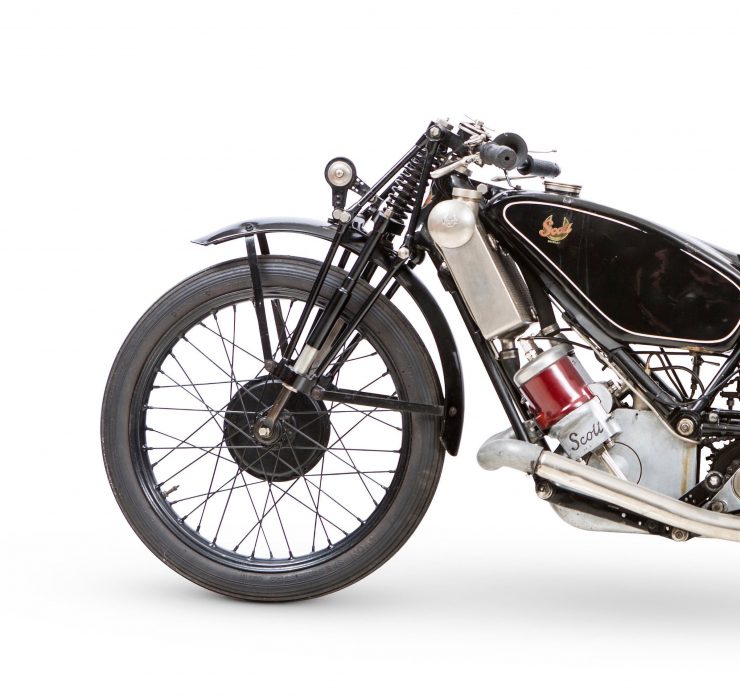 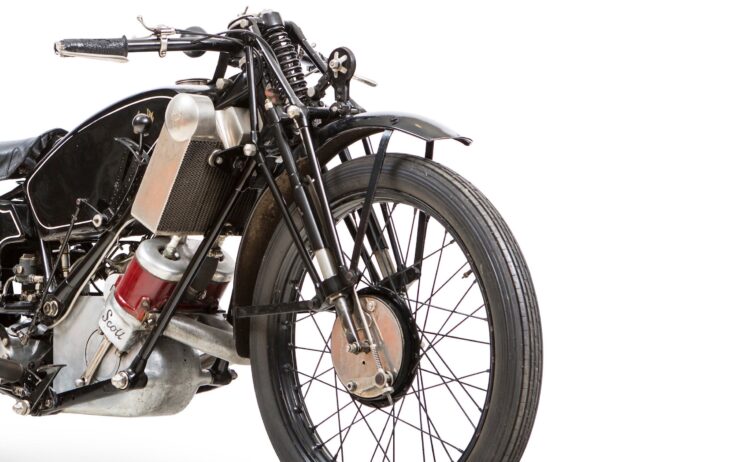 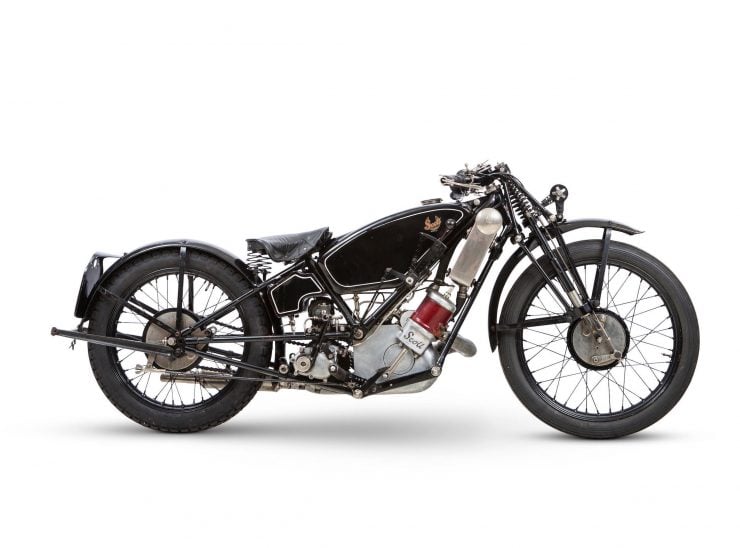 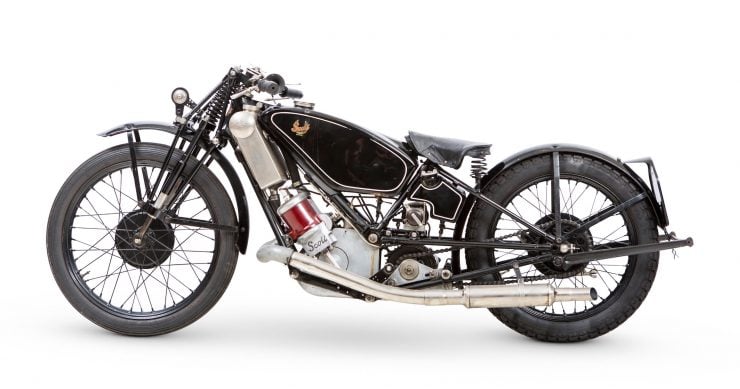 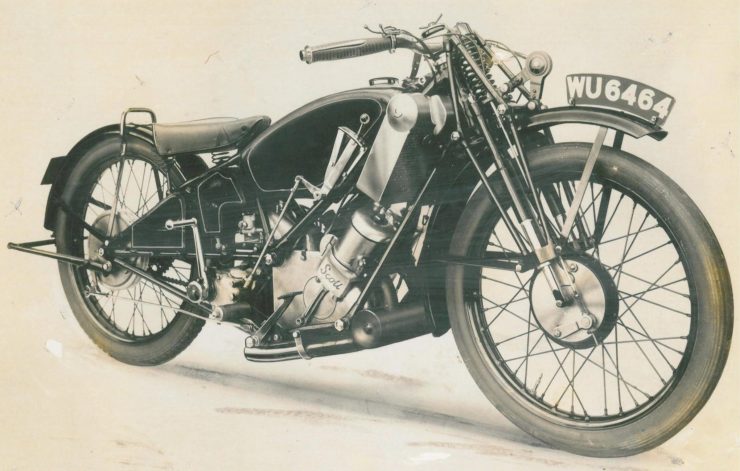 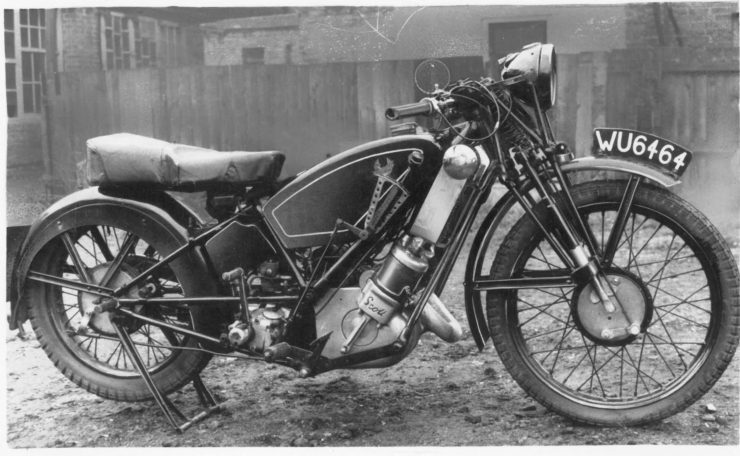 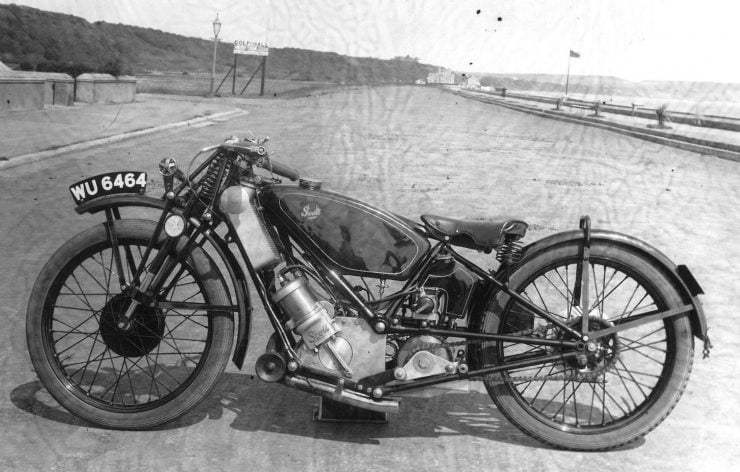 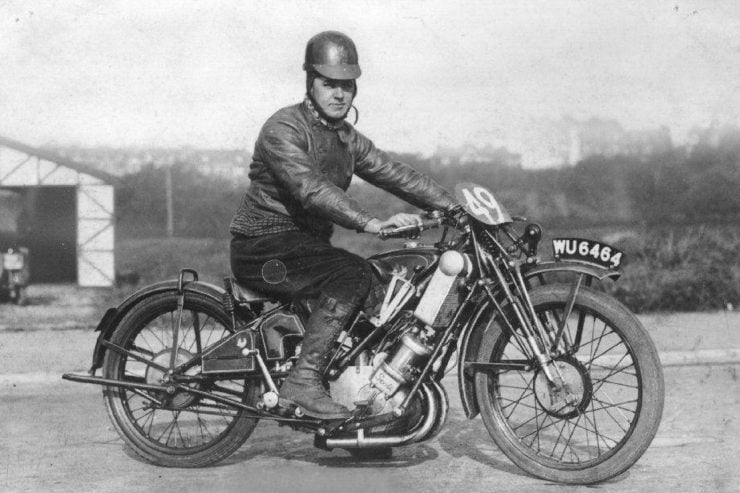 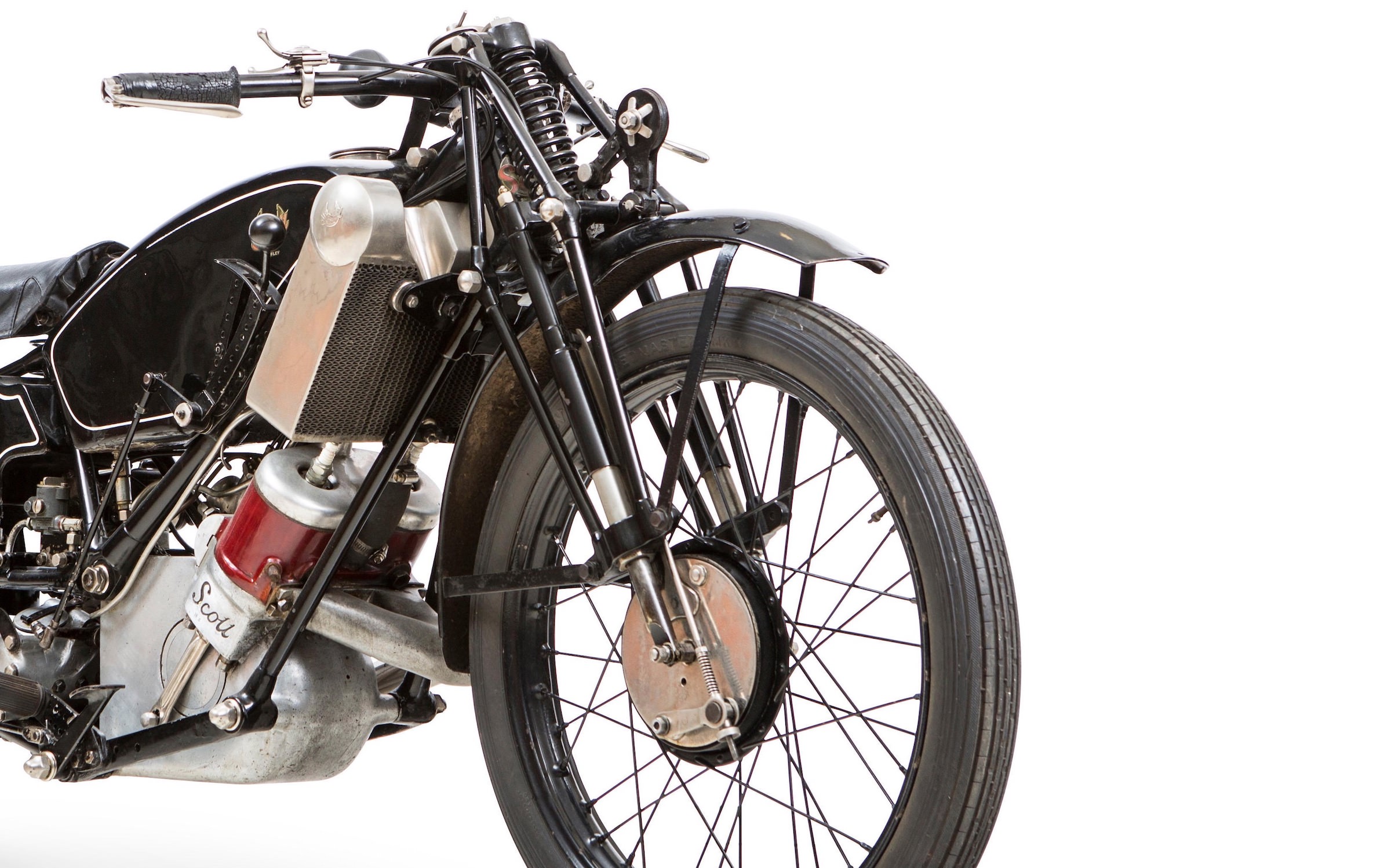