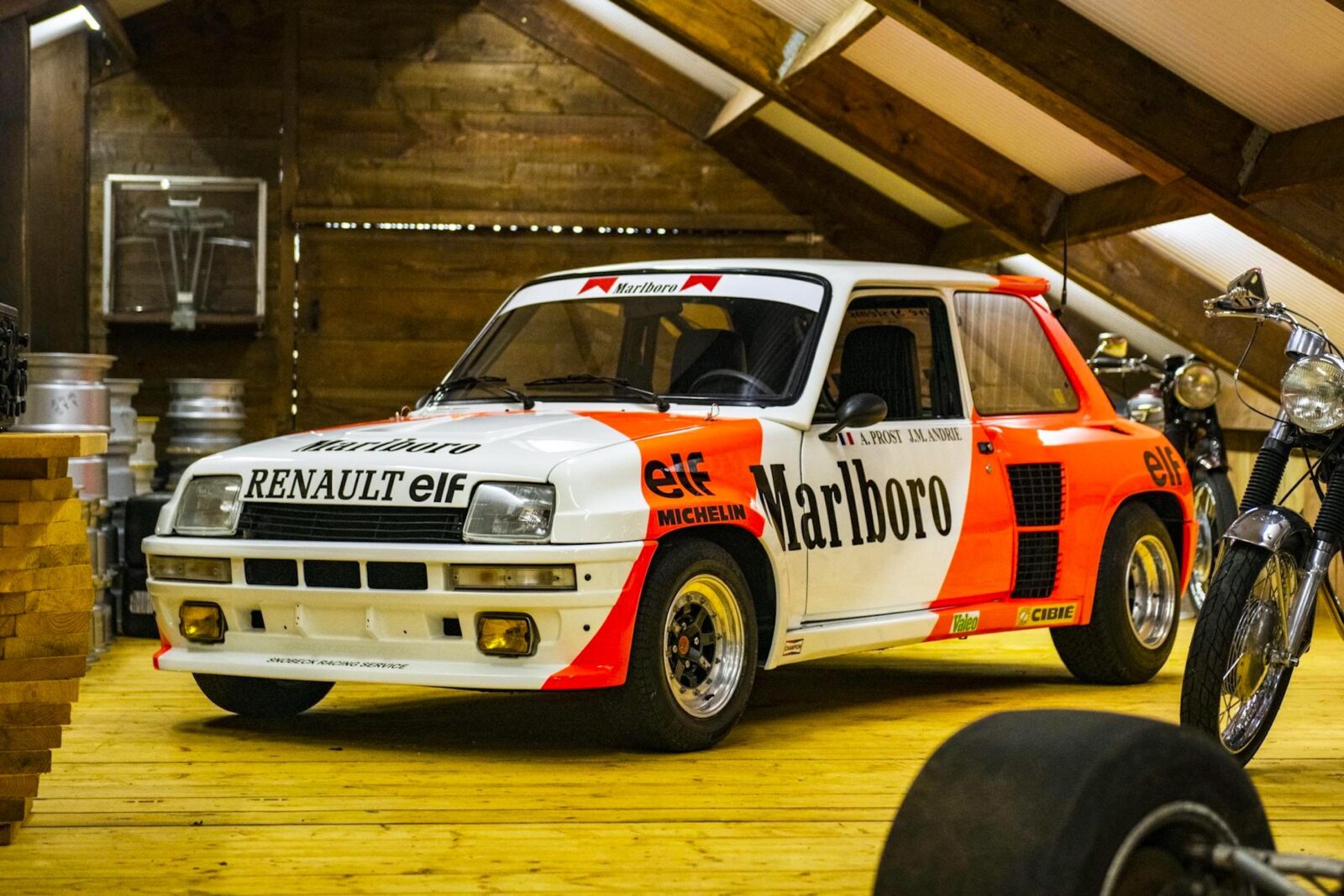 This Renault 5 Turbo 1 is a rare original Marlboro livery team car that was driven in the European Championship R5 Cup – a race series that was a supporting event to the Formula 1 races around the European continent in the 1980s as well as the 24 Hours of Le Mans.

The 5 Turbo, sometimes known as the R5 Turbo, is one of the most unusual Renaults of the era, it was also the most powerful French car in production at the time of its launch, and it had been designed with one goal in mind – beating the best in the world in top flight rally competition.

At first glance the Renault 5 Turbo looks a lot like its namesake the Renault 5, though the Turbo variant has flared fenders and a far more purposeful aura. The real changes become apparent when you open the hood and find no engine. 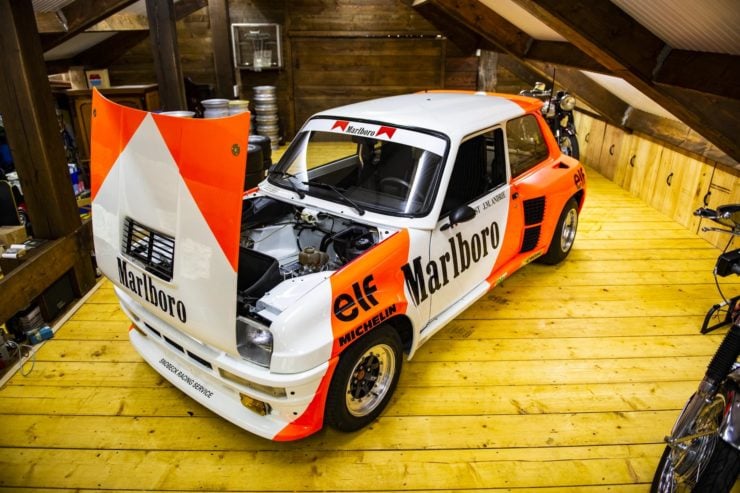 Rather than the Renault 5’s front engine, front wheel drive layout the 5 Turbo has a turbocharged rear-mid engine powering the rear wheels. The rear engine compartment sits directly behind the driver and passenger, with cool air being fed to the intake and radiators via vents on the rear fender flares.

Engineers at Renault in the late 1970s knew they needed something special to compete with the mighty Lancia Stratos. The trouble was that they had very limited funding with which to develop a car. With this in mind they took the Renault 5 and shocked the motoring world by bolting an engine into the back, turning it into the world’s first mid-engined hot hatch production car.

Renault’s plan had originally to built 1,000 examples of the Renault 5 Turbo in order to homologate it for both Group 3 and Group 4. The factory would then build special race-only versions to compete against the Stratos and the rest of the World Rally Championship field.

Impressively, Jean Ragnotti won the Monte Carlo Rally on its first outing in the World Rally Championship in 1981 – the most prestigious rally event in the world.

Above Video: Jay Leno takes a look at the Renault R5 Turbo 2, the direct descendant of the Turbo 1.

Over the course of its competitive life the Renault 5 Turbo in a variety of configurations would win a slew of rallies including the Tour de Corse in 1982 and 1985, the Rally de Portugal in 1986, and the Renault 5 Maxi Turbo Superproduction won the French Supertouring Championship in 1984.

In the road-going version of the Renault 5 Turbo power was provided by a mid-mounted 1397cc (1.4 litre) Cléon-Fonte OHV engine with Bosch K-Jetronic fuel injection and a Garrett AiResearch T3 turbocharger. Power output was 158 hp at 6,000 rpm with 163 lb/ft of torque at 3,250 rpm.

High performance racing versions of the car would produce upwards of 380 bhp, providing rocketship-like performance in the small, ~2,000 lb vehicle.

The production run of the Renault 5 Turbo would run from 1980 until 1986, almost 5,000 would be built across both the Turbo 1 and Turbo 2 variants, and today they’re highly sought after by collectors as possibly the world’s most extreme production hot hatch. 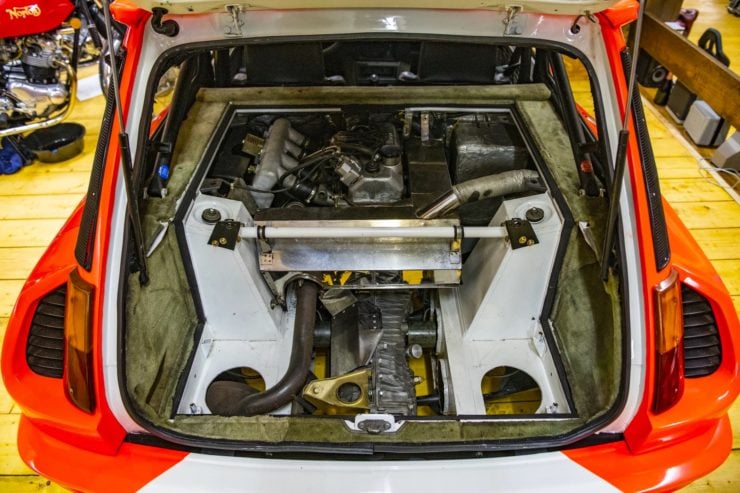 Above Image: The close-ratio 5-speed transmission is mounted behind the engine and feeds power to the rear wheels.

The car you see here is from 1980, the first year of production. It was dressed in period with the now legendary Marlboro livery – as shared with the Marlboro McLaren Honda F1 cars of the era.

It’s thought that this car was campaigned in period by Boy Hayje, and there is a photo in the history file showing Hayje with a Marlboro team R5 Turbo. It’s important to note that Jan Lammers and Alain Prost drove these cars at the time, and so it’s possible that all three, or any one of the three spent time behind the wheel.

After its racing career some modifications were made to the car to prepare it for street use including fitting a full set of carpets, and the Turbo 1 black leather and striped cloth seats. The car is equipped with a full roll cage, and all of the switchgear or electrics are said to be working.

Although not currently road registered the car has been put through an MOT test in the UK using the chassis number, with no advisories or defects. The car can now be road registered by the next owner if they so wish.

The car is currently being auctioned by Collecting Cars with approximately a week left to bid at the time of writing. If you’d like to read more about it or register to bid you can click here to visit the listing. 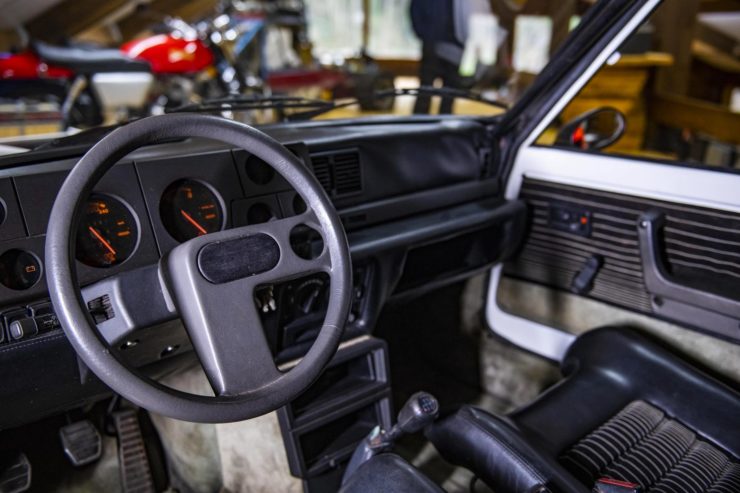 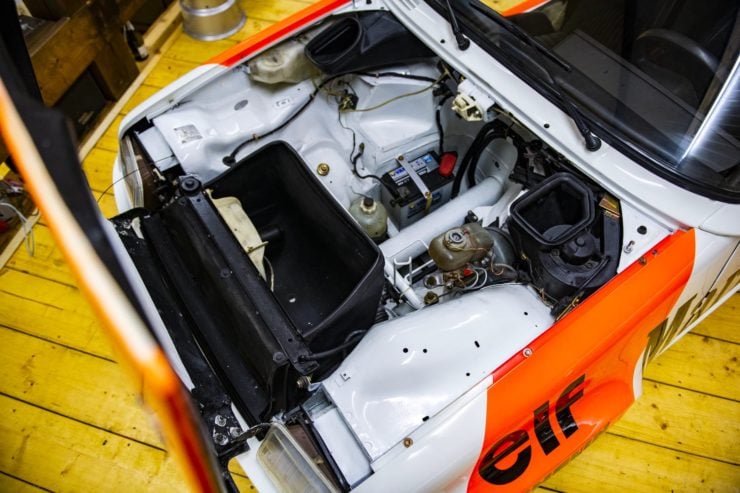 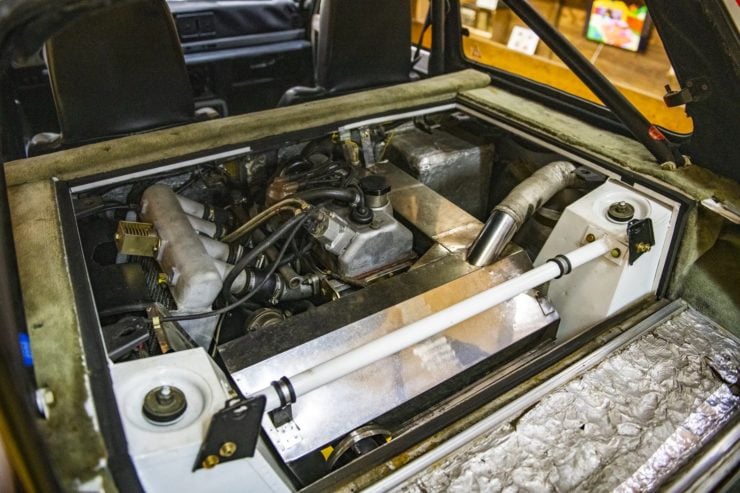 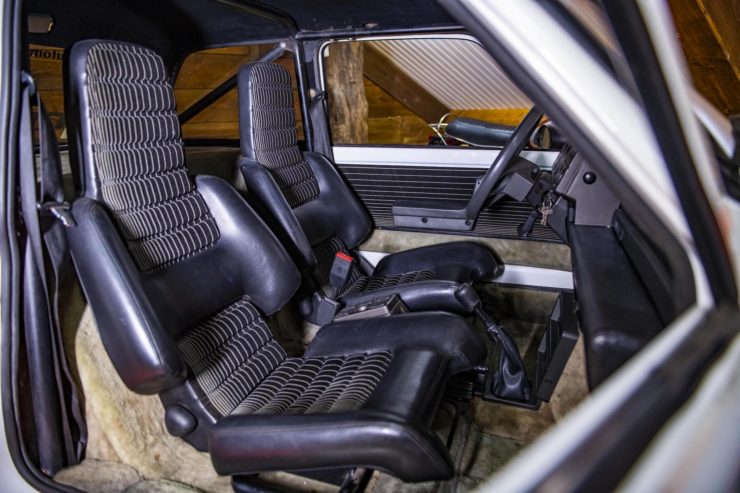 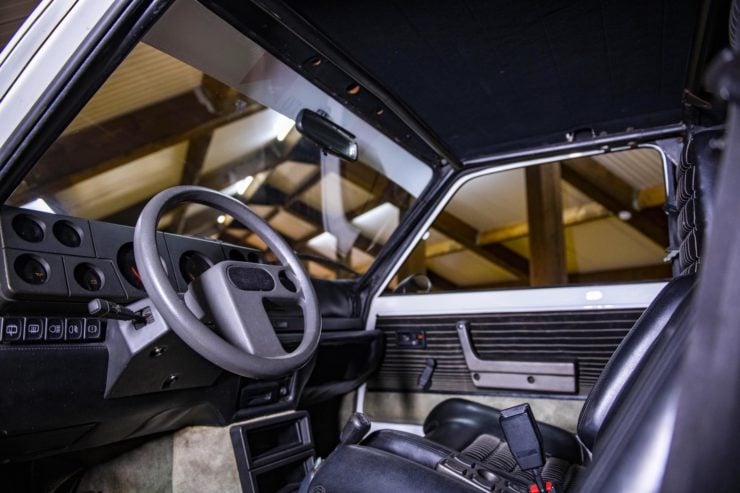 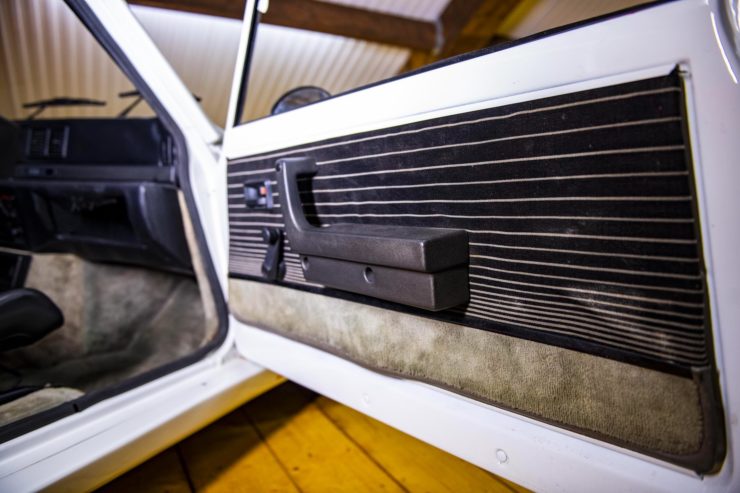 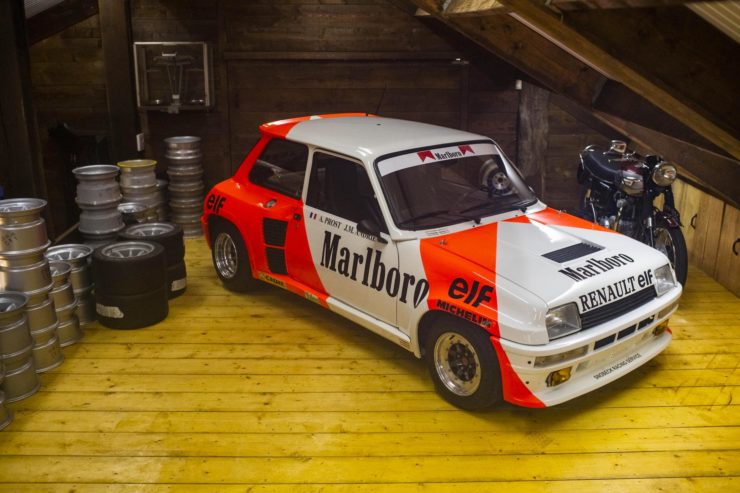 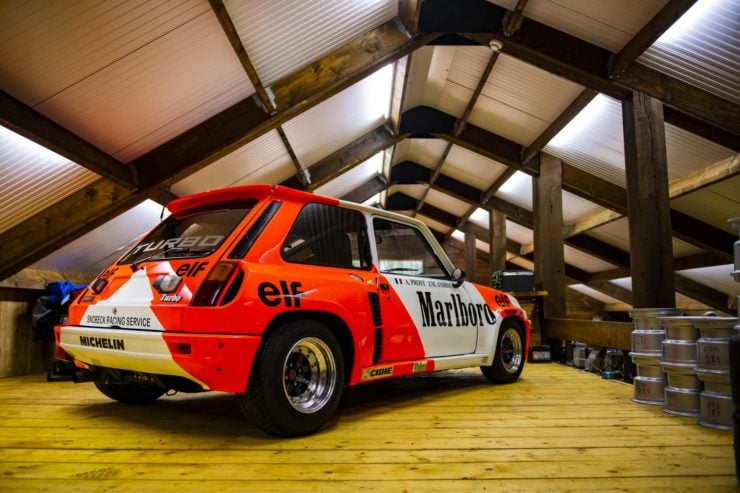 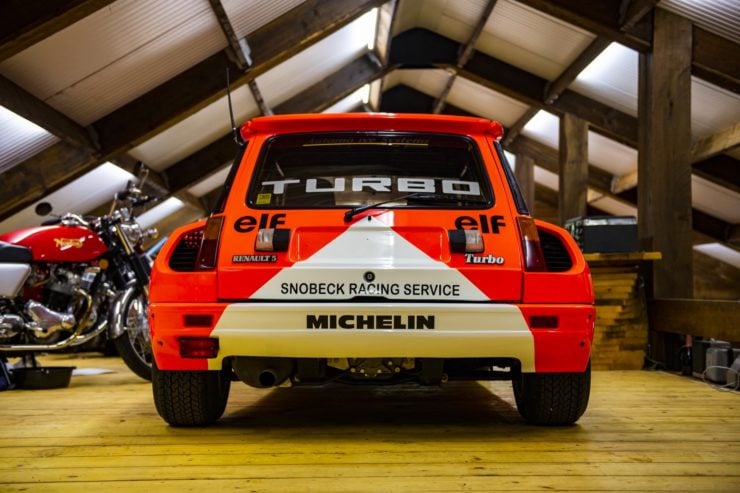 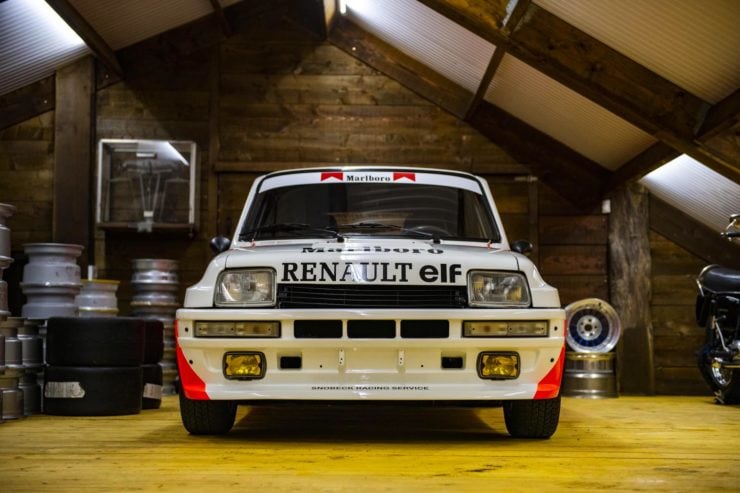 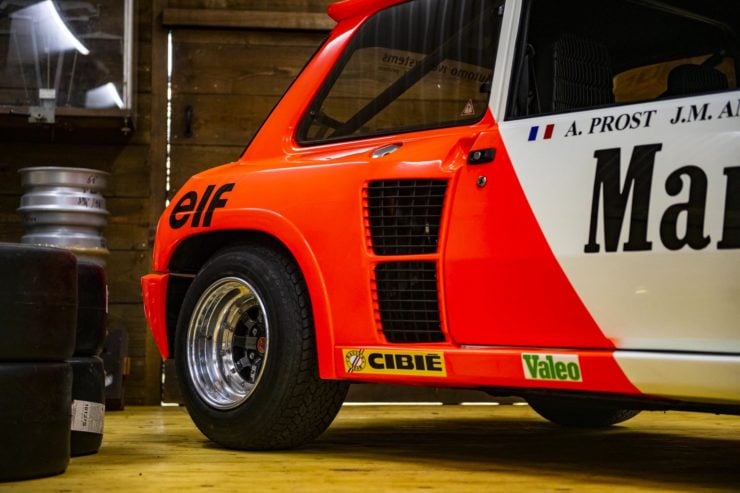 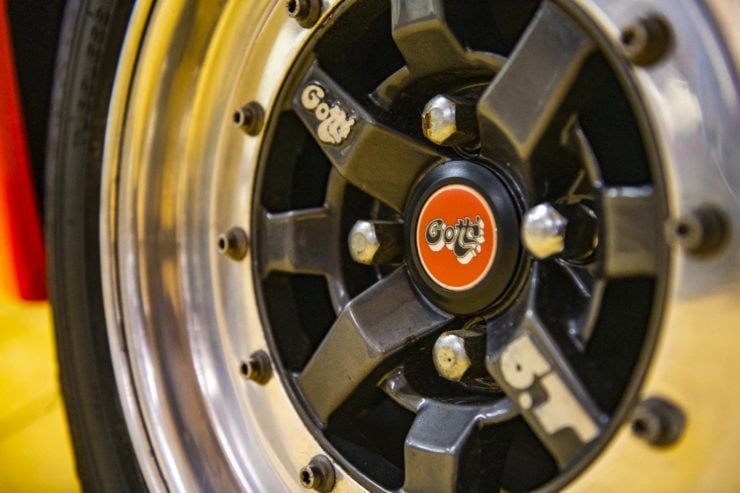 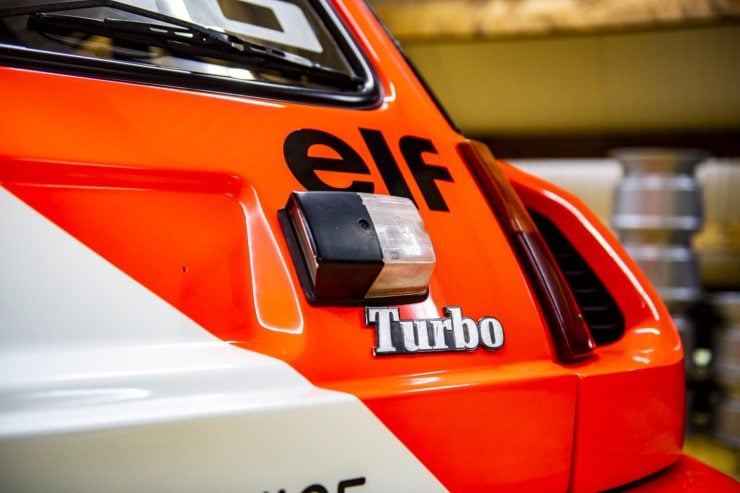 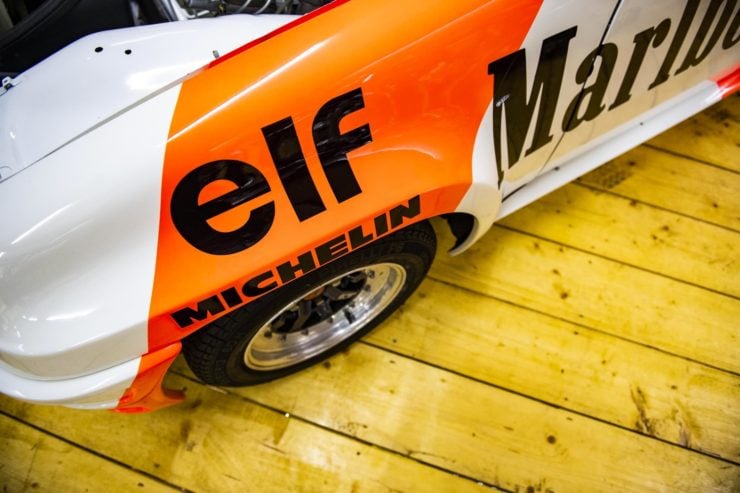