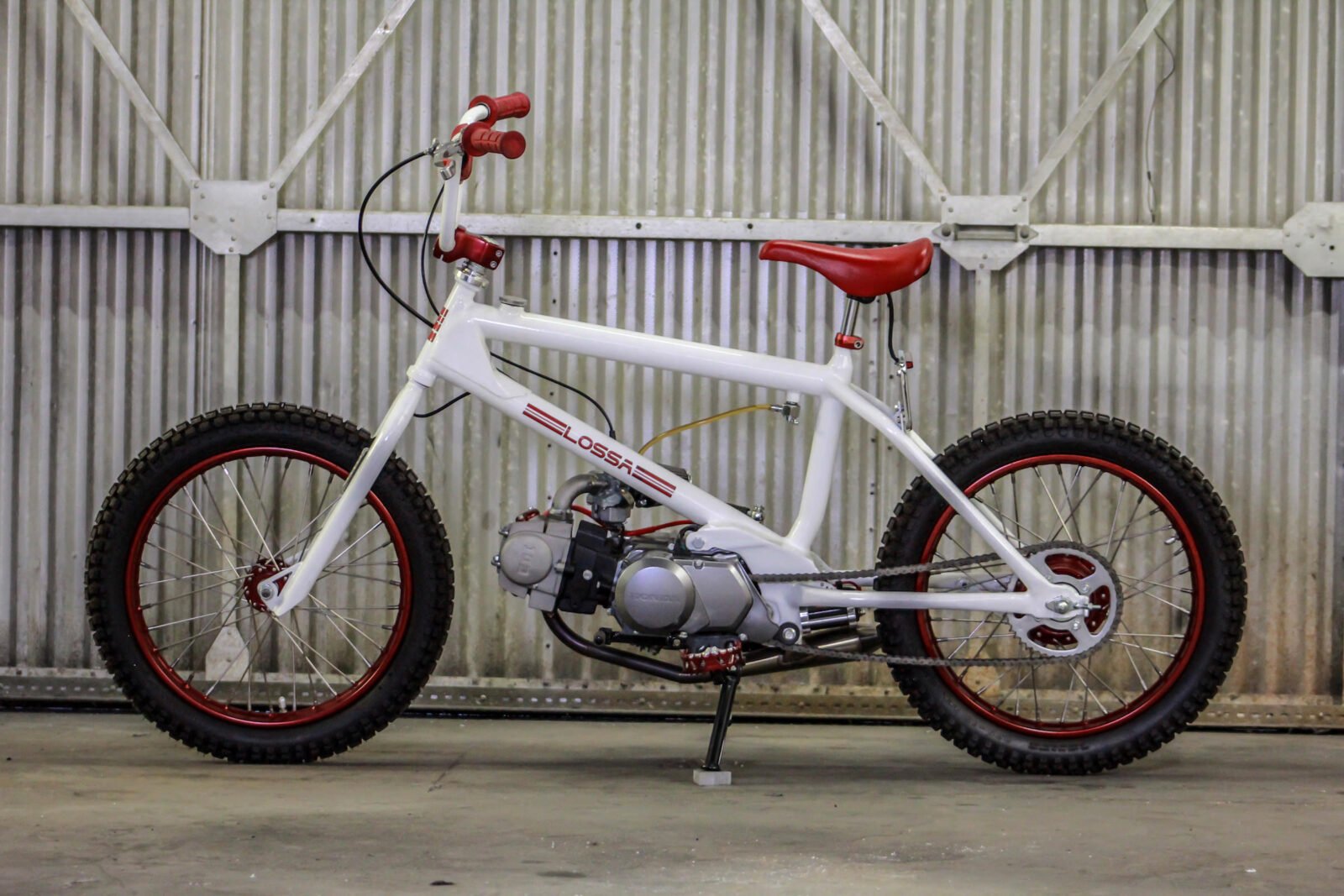 This post was written by Jay LaRossa of Lossa Engineering – when possible we like to bring you the story of a build in the words of the person who built it, to cut out the middle man and give you unfiltered insight into their thought process and methods.

A while ago I was talking to my buddy about building a BMX-styled Honda CB350, super simple and clean, mags and colors that popped. Then one day while on Instagram I came across @Maru1Motorcycle from Japan and his pictures of a Honda Cub 50 he made look like a BMX bike. I then realized that those type of Hondas are perfect for the build. I have always loved Redline BMX bikes since I was a kid, so I decided to build mine to resemble the Redlines of the 80’s. I chose to start with a Honda CT90, since I had 4 of them sitting at my shop.

I wanted this bike to be street legal too, so keeping the original CT90 VIN# was very important.

I started by chopping off everything on the frame but the motor mounts (where the vin# is located) and the head tube and bottom tube. Then I fabricated the complete frame from scratch with new tubing. The gas tank is located in the top tube with a Pingle petcock. I chopped up the CT90 swing arm to use the axle mounts and chain adjusters. 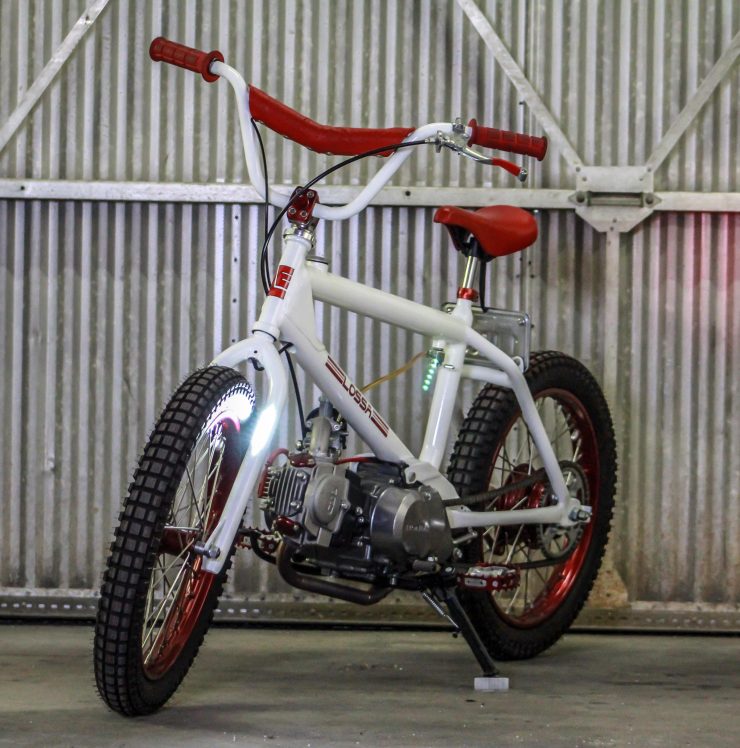 I grabbed a set of BMX forks I had laying around and adapted them to the CT90 stem. Topped that off with a Redline stem and V bars with the CT90 internal throttle grafted on. The seat tube was made to hold a typical BMX seat clamp and seat post with a reupholstered red leather BMX seat on top. The hoops are the original CT90’s but I chose a spool front hub I had laying around and laced them with new stainless spokes. I only wanted one lever on the bars to resemble a rear brake (it is the clutch lever). A set of BMX bear trap pedals were mounted to the stock peg mounts and made so they can still rotate.

For the power plant I didn’t want the stock 90cc motor, I chose a new Lifan 110cc motor and swapped over the Honda side covers. Evan from Iron Cobra Fabrication custom made the stainless exhaust for the bike.

Now that all the fabrication was done, it was time for coatings. I wanted the parts to look like red anodizing, so powder coating was a silver base with a red candy topped off with a matte clear. The frame, forks and bars are painted white with the custom decals applied before the clear. All the nuts, bolts and misc parts were re-zinc plated. 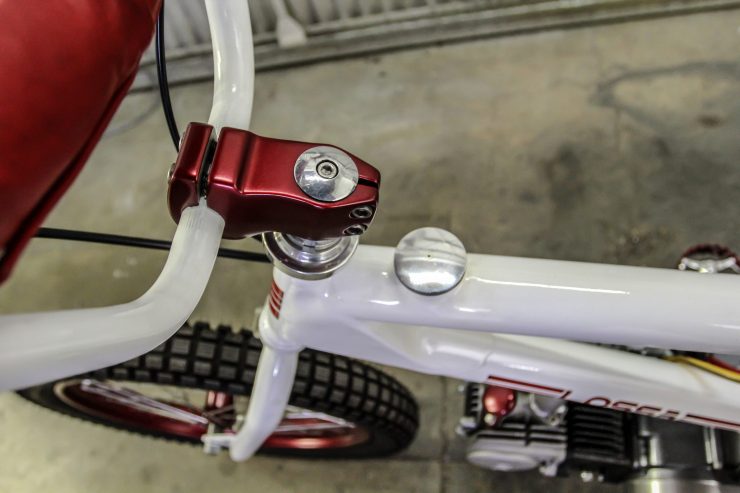 It was wired from scratch using an Antigravity 4-cell battery and everything is hidden behind the motor. I used LED strips on both sides of the forks for the headlight and a billet license plate frame with the running and brake light.

The bike was finished and I entered in the Deus Biker Build Off where it took first place for minis. I also rode it to Born Free a few years ago. Since then it has made its way to The One Moto Show in Portland, Corsa Moto Classic where it also took first place and the IMS Show in Long Beach where it won the ingenuity award.

Everyone that has seen this bike loves it, wants to ride it and asked how much to build them one. I think I made this look too much BMX, most people think I just slapped a motor on a BMX bike. This bike does 50mph and holds almost a 1/2 gallon of gas that can get you about a 15 mile range. 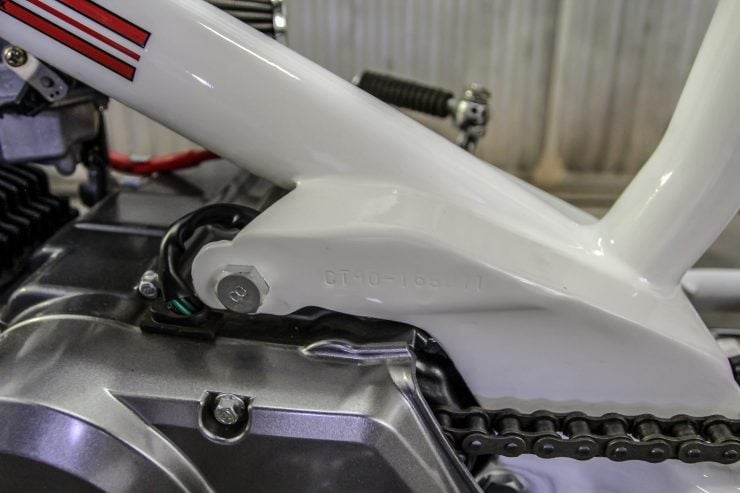 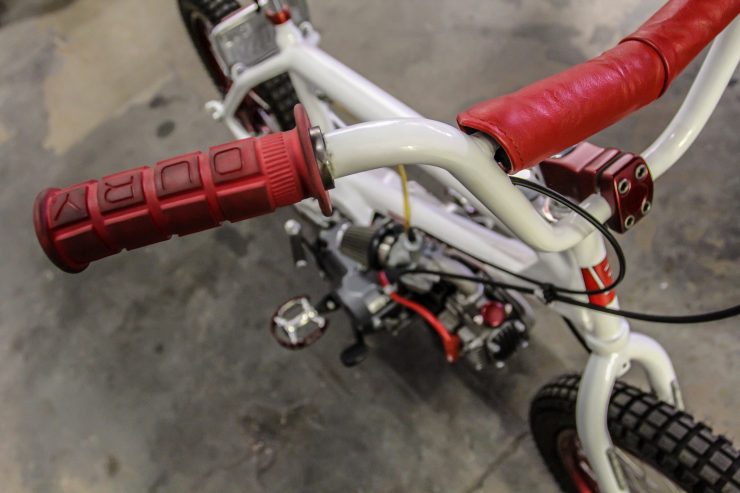 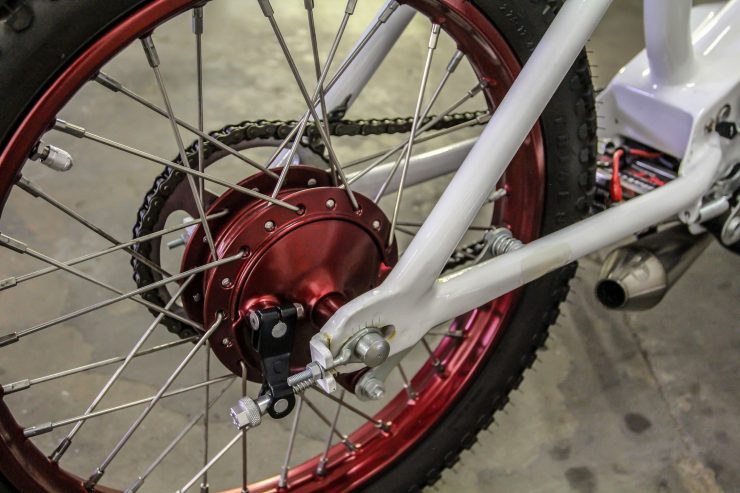 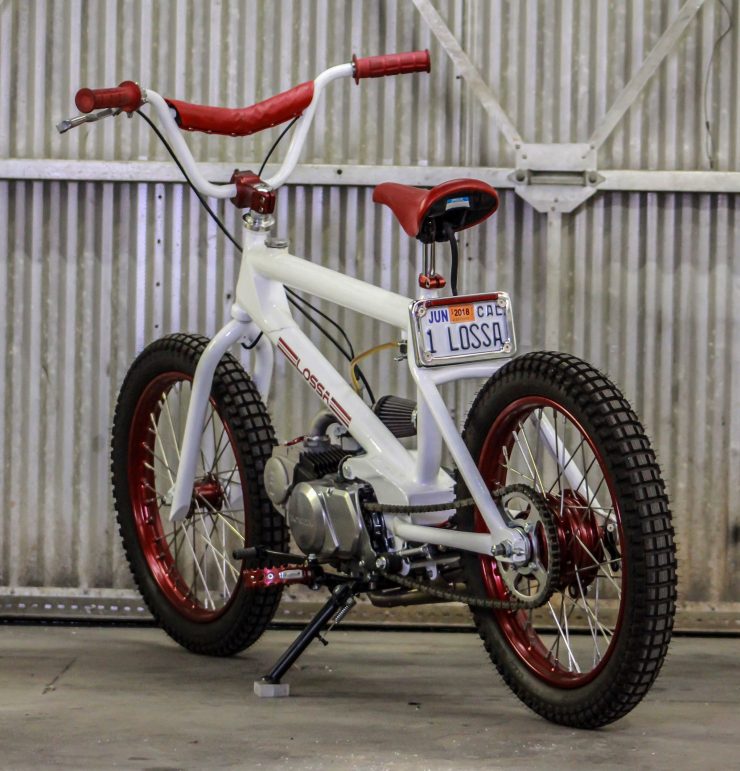 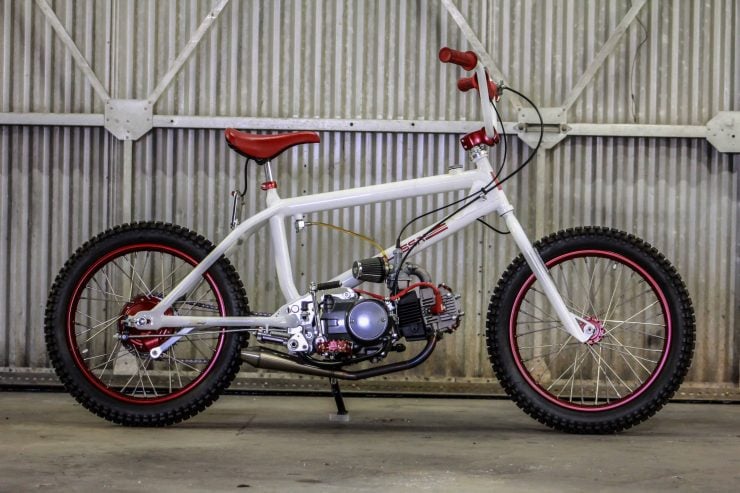 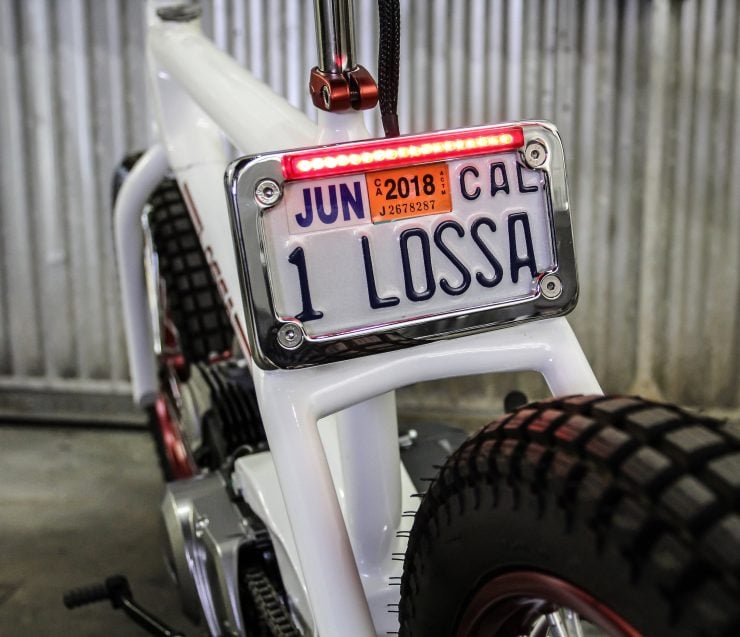 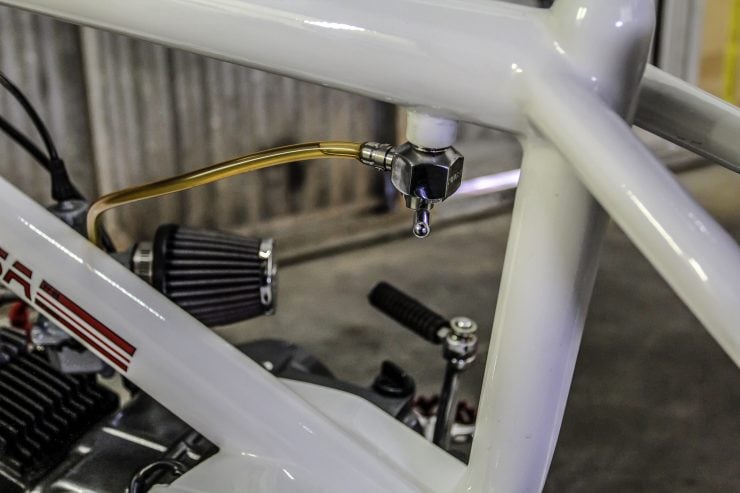 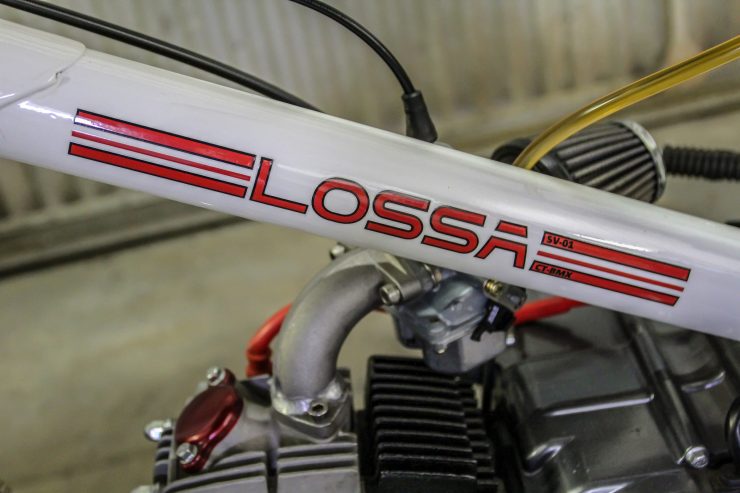 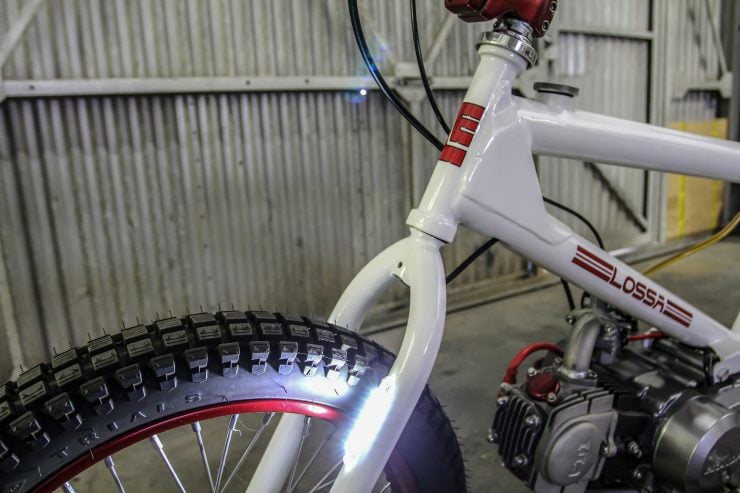 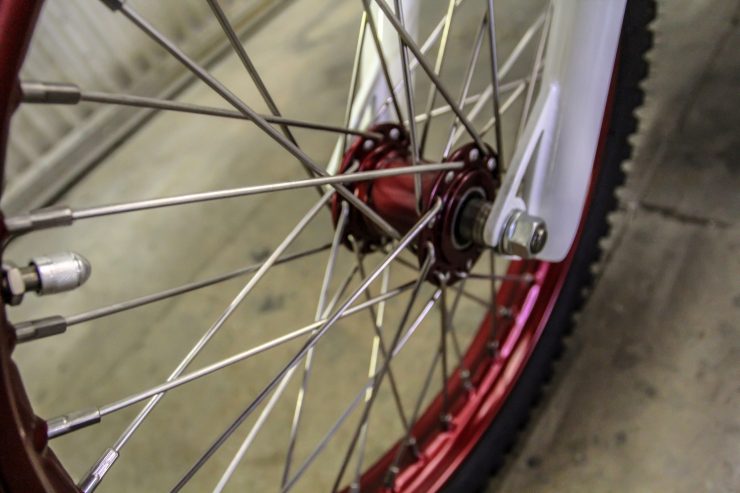 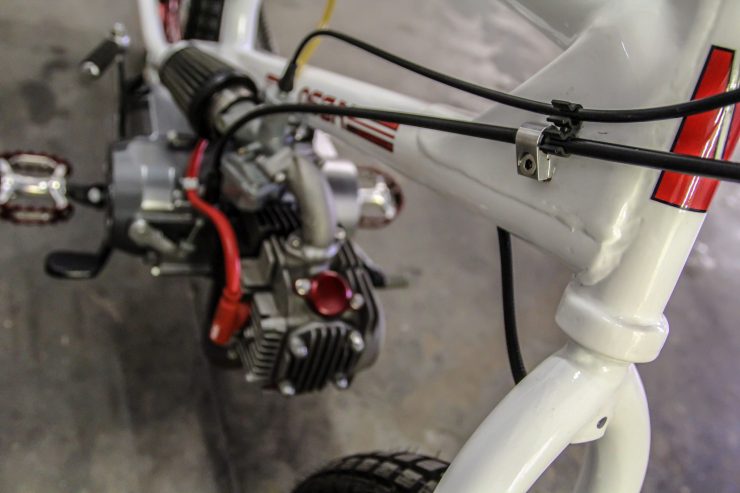 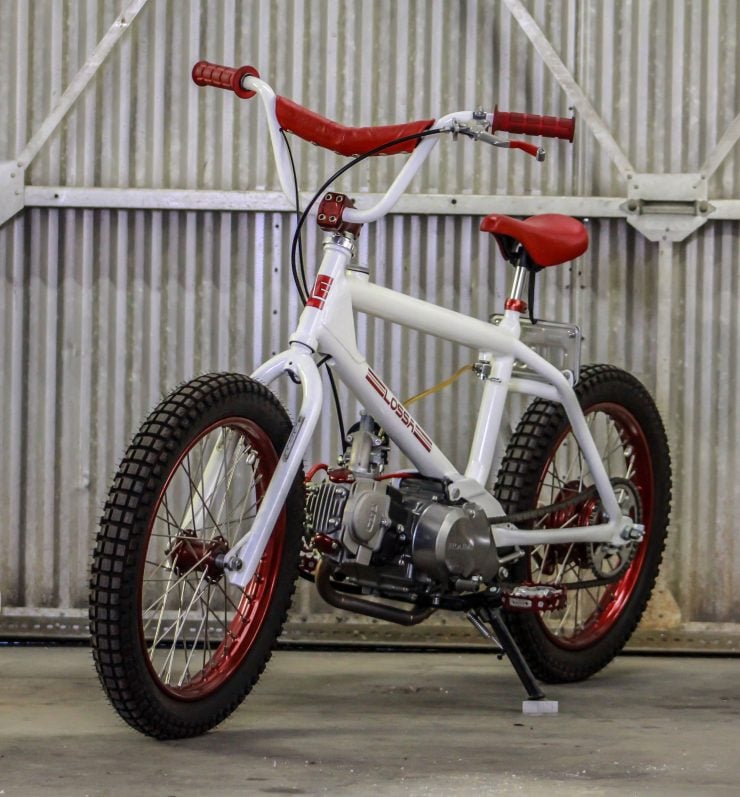 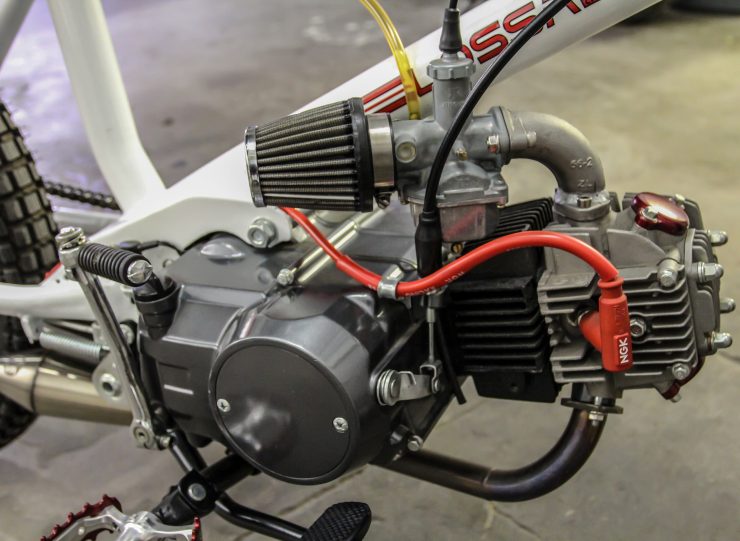 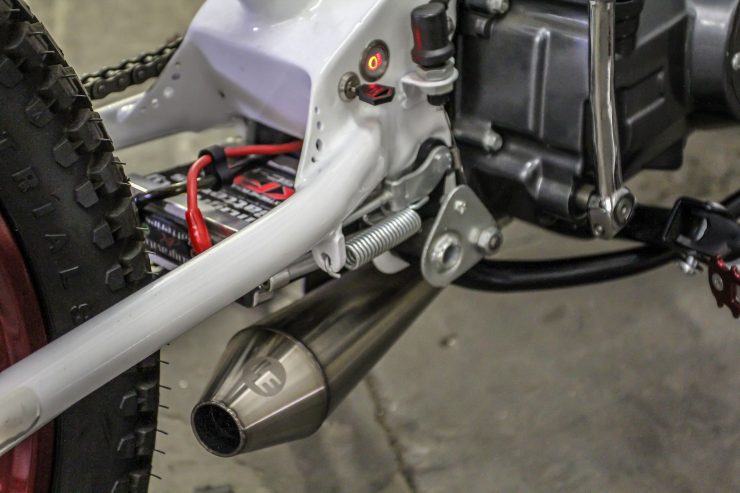 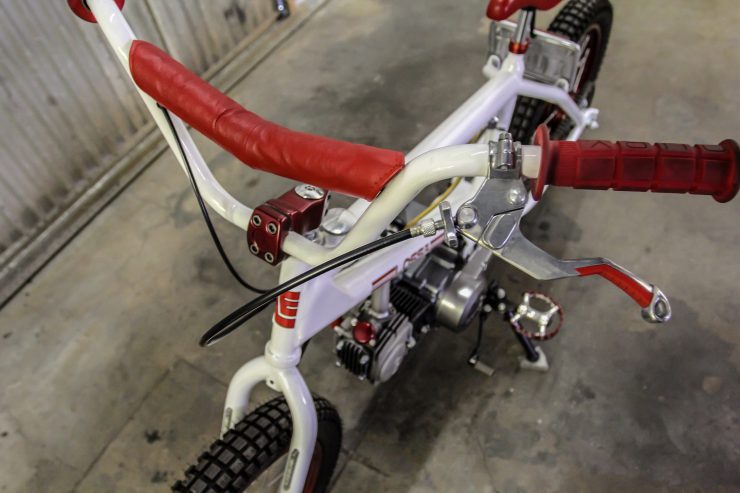 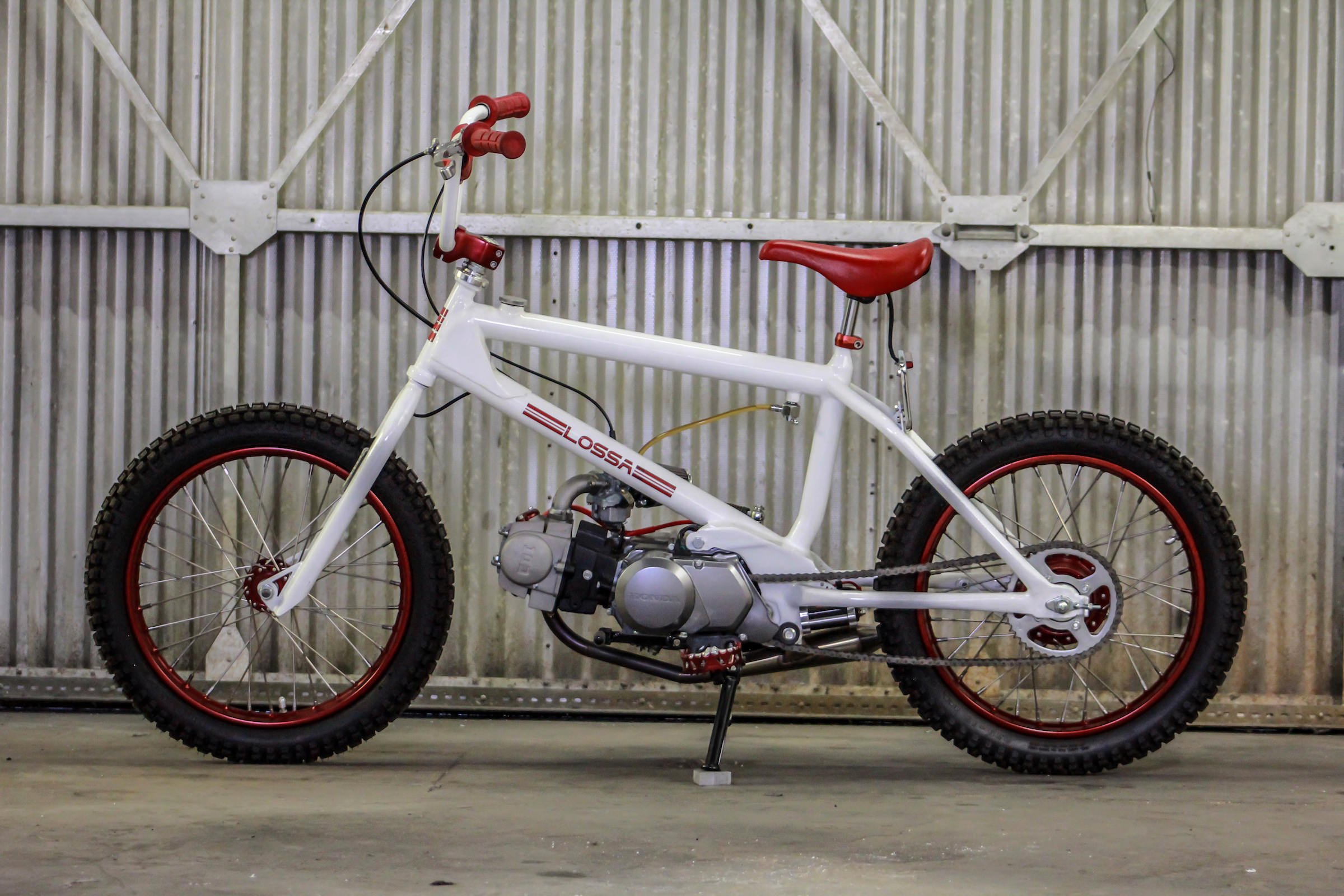 This is the new Deck Jacket by Jane Motorcycles, a New York City company known for…

This is the Suzuki GSX750S Katana 1:12 scale kit from Tamiya, it faithfully replicates one…