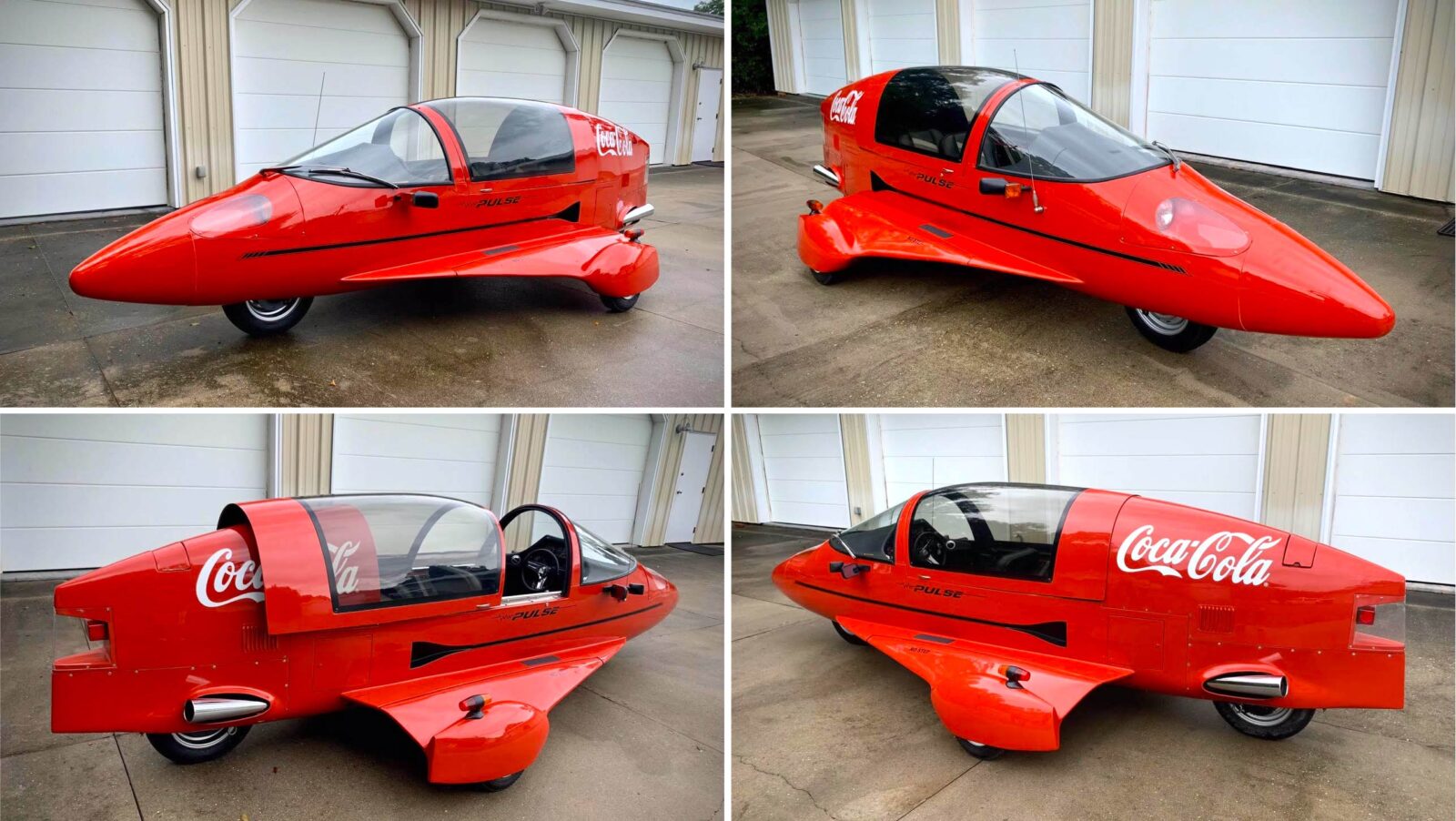 This is one of just 326 examples of the Pulse Autocycle that was made, this example was used by Coca-Cola as a marketing vehicle and as you can see it’s still carrying the Coca-Cola livery today.

This Autocycle is powered by a 400cc Yamaha motorcycle engine with a 6-speed manual transmission, and it has a sliding jet fighter–inspired canopy for getting in and out.

Relatively few original Pulse Autocycles remain today though there is a faithful group of enthusiasts in the United States who work hard to keep them on the road. We see Autocycles come up for sale only rarely, perhaps once every three years or so, and they always attract a lot of attention.

✱ The Pulse Autocycle is legally recognized as a motorcycle, as just three wheels are touching the ground at any one time.

✱ The vehicle is powered by a rear-mounted motorcycle engine, gearbox, and rear wheel. Engine sizes ranged from 400cc up to over 1,100cc.

✱ The Autocycle can accommodate two people in tandem seating, it also has 6 sqft of luggage space in the aft trunk area.

✱ Due to its aircraft inspired design the Autocycle has excellent aerodynamics, with some owners reporting over 80 mpg.

The Pulse Autocycle was developed by aircraft designer James Bede, a man who is perhaps better known for his work designing a range of kit planes. One of his kit plane designs was the Bede BD-5 Micro, the smallest jet plane in the world, you may have seen it before as one was used on screen in the James Bond film Octopussy.

Above Video: This clip from Octopussy shows the the Bede BD-5 Micro in action, with Roger Moore at the controls as 007.

The BD-5J and the Pulse Autocycle share more than a passing resemblance, in fact the most obvious difference between the two vehicles is the size of the wings, with the Pulse Autocycle having much shorter winglets that have 8 inch wheels at the tip for increased stability, and no horizontal stabilizer.

The Pulse Autocycle was originally called the BD-200, this name was then changed to Litestar, which was changed to Pulse, which then became Pulse Autocycle. As you’ve likely realized, it was called an “auto cycle” as it combines design elements of both the automobile and the motorcycle.

Manufacturing of the Autocycle was undertaken by the Owosso Motor Car Company of Michigan between 1985 and 1990. The vehicles had a 123″ wheelbase, an overall length of 192″, with a width of 76″, a height of 54″, and they weighed in at approximately 1,000 lbs depending on final specification and engine used.

The company described their vehicle as a Ground Cruising Recreational Vehicle (GCRV) though this concept never really caught on. The purpose of combining the car and the motorcycle into a single vehicle with aerodynamics borrowed from the world of aircraft was fuel efficiency, 80+mpg was reported by some owners.

The fun factor was also a big motivator behind the design, with the vehicle offering motorcycle-like acceleration and an altogether new driving experience described as being like flying a plane, riding a motorcycle, and driving a car all at the same time.

Under the skin the construction is relatively straightforward, a tubular steel chassis is used with a fiberglass body, the majority of the motorcycle was typically retained including the engine, clutch/transmission, swing arm, chain drive, and suspension.

Above Video: This short film shows the process of restoring an original Pulse Autocycle, it gives a detailed look into all aspects of the vehicle from the chassis on up.

Upon seeing the Autocycle for the first time many people want to know how it corners. The reason for those winglets on each side of the fuselage is that that contain wheels in their tips that hold the vehicle upright as it corners and when it’s parked.

Some owners installed what look like rear-mounted jet engines on their Autocycles but they’re actually radiator housings for liquid-cooled motorcycle engines, as you can see in the video above.

The Pulse Autocycle you see here is a 1986 model that has been fitted with a JVC audio system with jet engine sound loop, so that when you’re arriving somewhere you can turn it on and make it sound like a jet is coming in to land.

As mentioned above this Autocycle was owned and used by Coca-Cola as a marketing vehicle, the company kept it from 1987 until 1990, and it’s safe to assume it was wildly popular back in the 1980s given its futuristic appearance.

This Autocycle has a 400cc Yamaha motorcycle engine and transmission mounted in the rear, it also has a reverse gear which is sue to come in handy. The gear shifter is mounted to the right of the driver, there’s a centrally mounted steering wheel with instrumentation behind it and the stereo just below.

If you’d like to read more about the unusual Pulse Autocycle or register to bid you can click here to visit the listing on Mecum. It’s due to cross the auction block in late July and at the time of writing there’s no price guide listed. 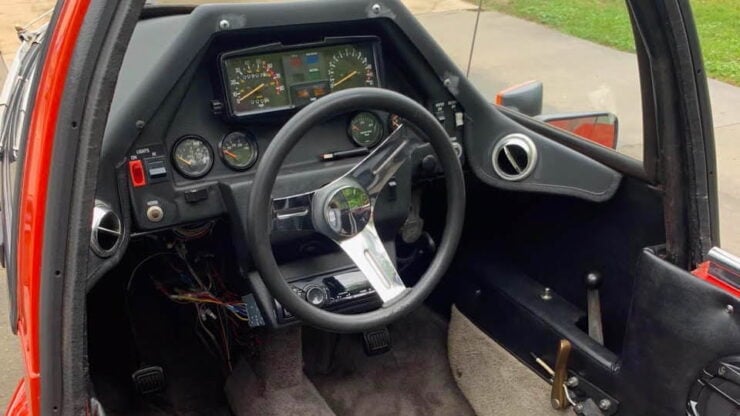 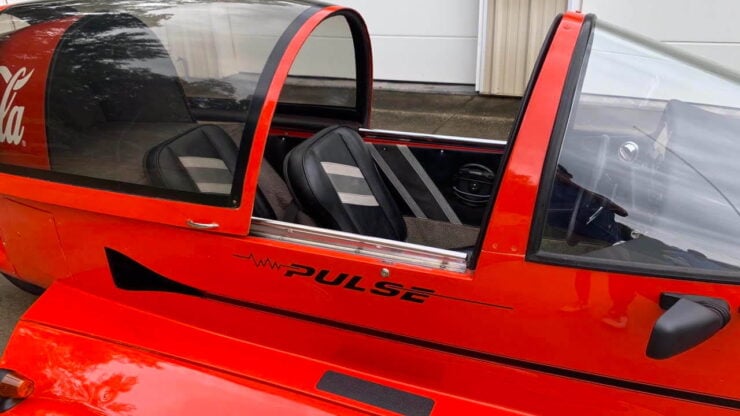 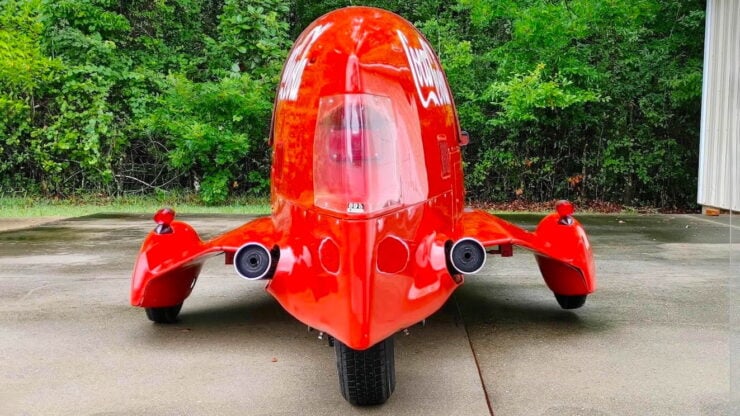 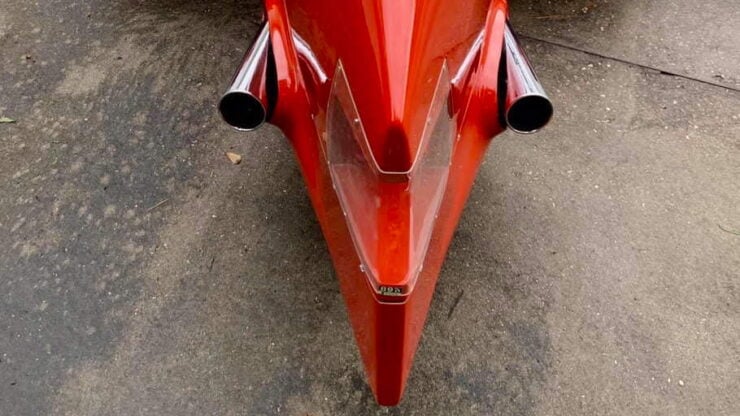 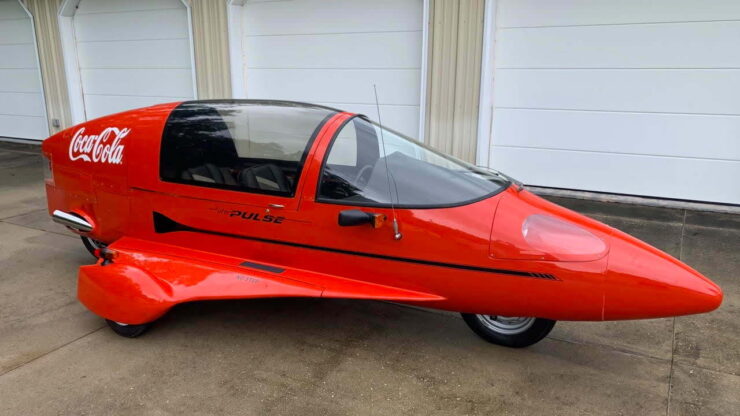 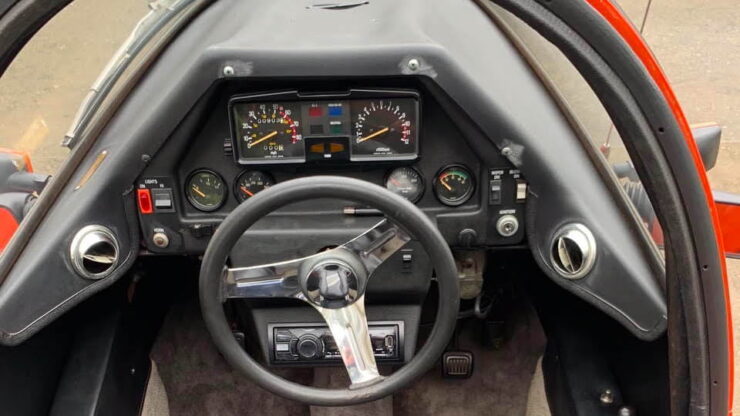 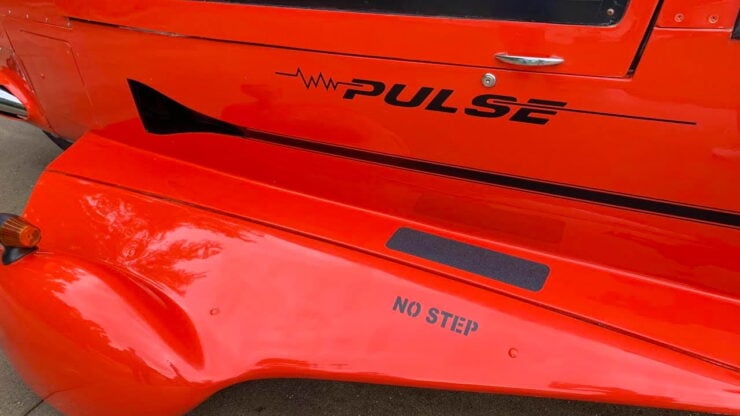 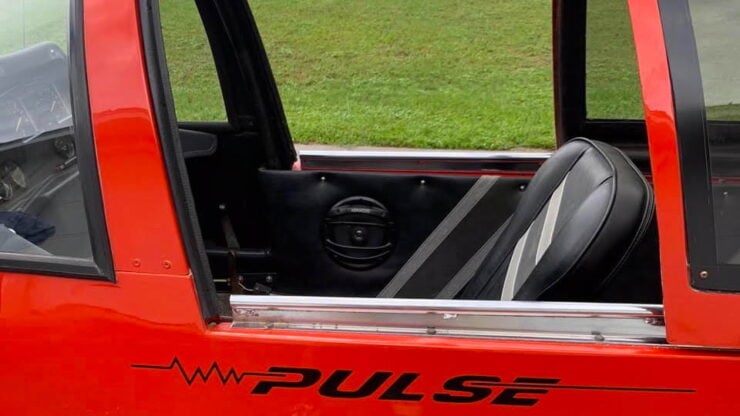 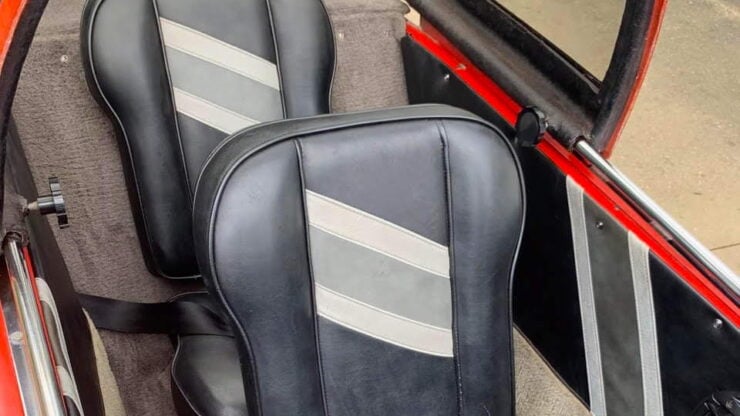 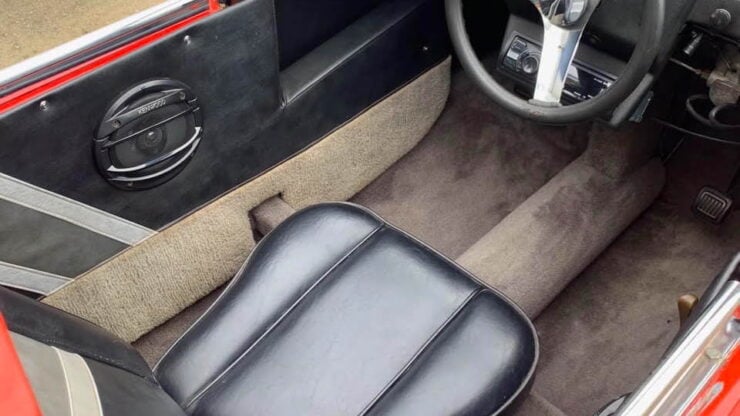