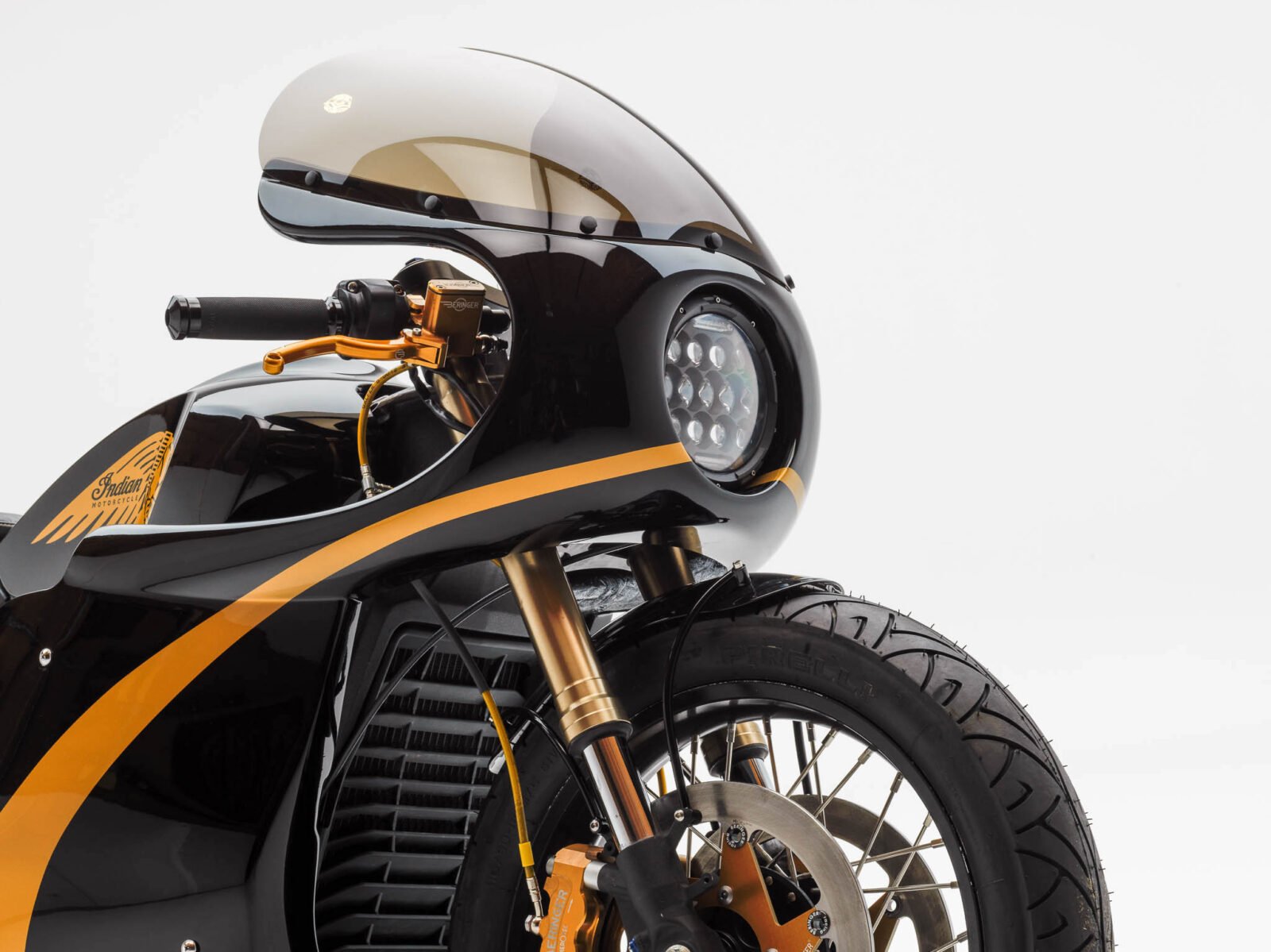 If you’d like to vote for this bike to win you can click here to visit the competition page.

When PJ Grakauskas was picked to build one of the three custom Indian Bobbers competing with mechanical engineer Christian Newman and NASA engineer Alfredo Juarez, he knew he had his work cut out for him.

PJ isn’t an engineer, he’s a shed-based motorcycle tinkerer based in Cleveland who entered the competition with Indian Motorcycles to win one of three brand new Indian Scout Bobbers, with $10,000 spending money to complete a custom build.

Once the Indian had been delivered to his 10′ x 12′ Ohio shed PJ set to work. By the time he was done he was rolling out what is quite possibly the single most beautiful custom Indian we’ve seen since the company’s return to motorcycle manufacturing in 2013. 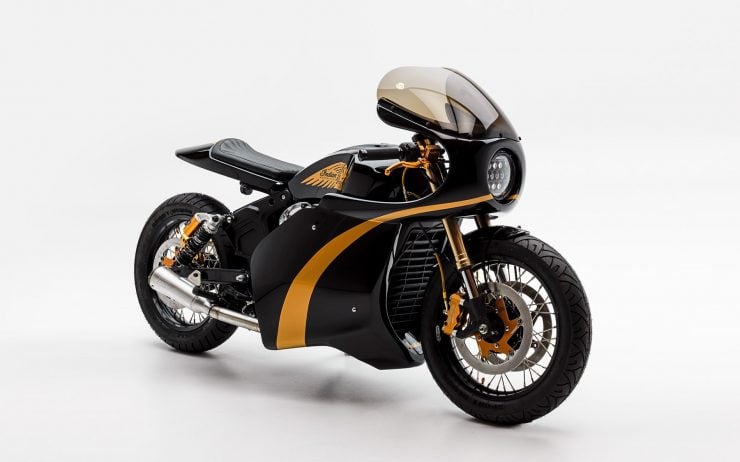 Turning an Indian Scout Bobber into a retro racer is mission unto itself and PJ knew he was facing an uphill battle. The build started with a full teardown to the frame – keeping the engine in place but removing everything else.

The design called for a full bespoke fairing, a new seat and rear end, a heavily modified fuel tank, a new front end, new rear suspension, and a slew of other new parts and mods.

Once the design of the fairing had been penned the diagrams were painstaking converted to a to mold. The primary difficulty was that PJ wanted the fairings to be removable with quick release brackets – not something that’s ever been done before with this model, so it required no small amount of work to get right.

The original front suspension and brakes weren’t going to cut the mustard so PJ sourced the complete front-end from a 2007 Suzuki GSXR with fully-adjustable upside down forks, to which he added twin floating rotors, and twin four-pot radial Beringer brakes. He used Cognito Moto 50 mm offset triple trees for the front-end swap and added a Cognito Moto front fender. 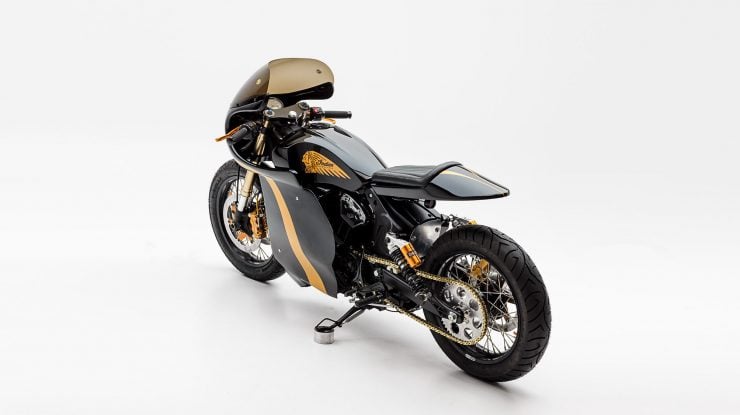 A matching Beringer brake was fitted to the rear, along with a pair of fully-adjustable Öhlins shock absorbers. The original belt final drive was changed to a more performance oriented chain drive, and the foot controls were moved backwards for better ergonomics.

A pair of Woodcraft clip-ons with Avon grips replace the original handlebars and the original subframe and seat were changed to a custom low-profile café-style seat with upholstery by New Church Moto. The engine was given a new brain in the shape of a DynoJet Power Commander, as well as a new custom 2-into-1 exhaust with a SuperTrapp aluminum race muffler.

Analog Motorcycles supplied the rear light and mini LED signals, and the final piece of the puzzle was the original Scout thank that had been reshaped by the folks at Raw Iron Choppers to incorporate traditional cafe racer style knee indents on either side. The immaculate paintwork was all completed by the talented team at Krossover Customs, the black and gold livery is somewhat reminiscent of the classic John Player cars.

The completed bike is something Indian could realistically productionize and sell. With its aluminum frame and double overhead cam 1133cc V-twin producing 100 hp and 72 ft lbs of torque, the Scout has the ingredients of an entertaining retro racer – it just needed PJ’s attention to bring it out with a custom build focussed on handling and aerodynamics.

If you’d like to read more about this bike you can click here to view the article on Indian Motorcycles. 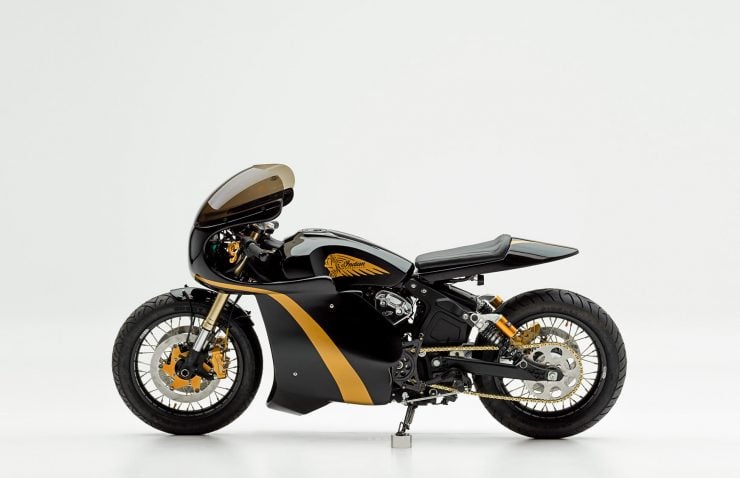 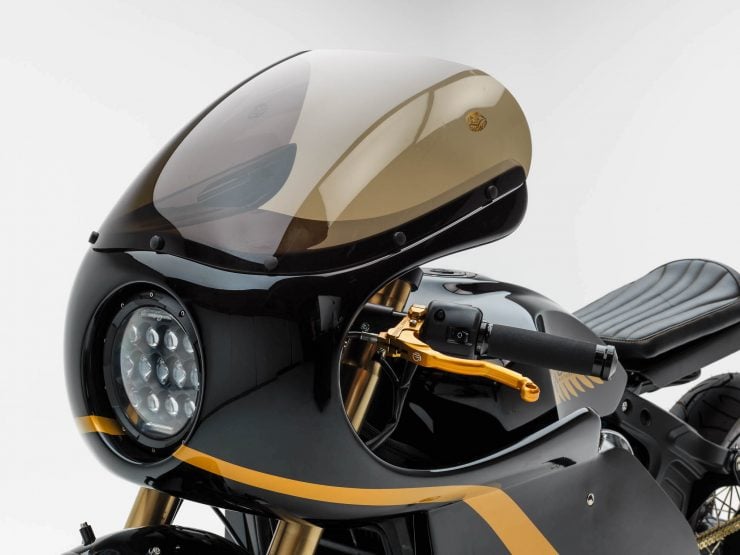 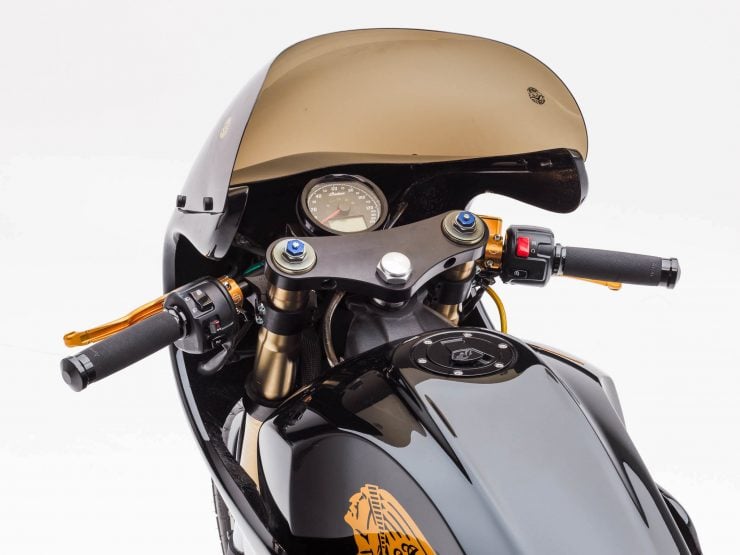 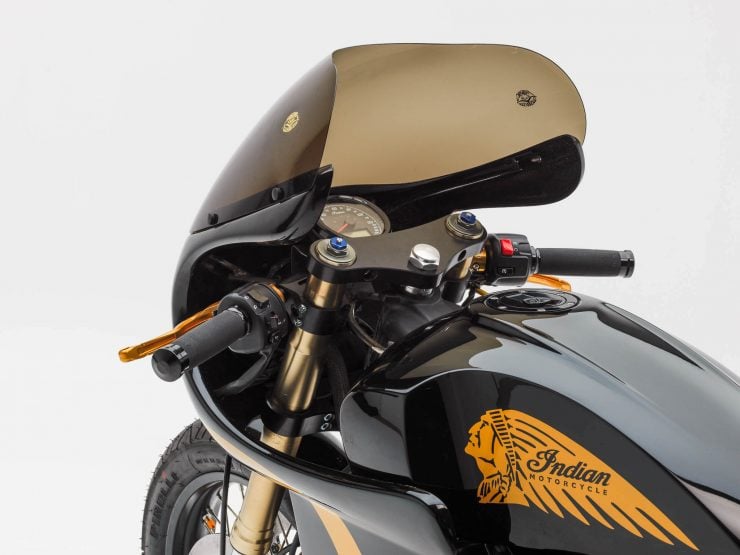 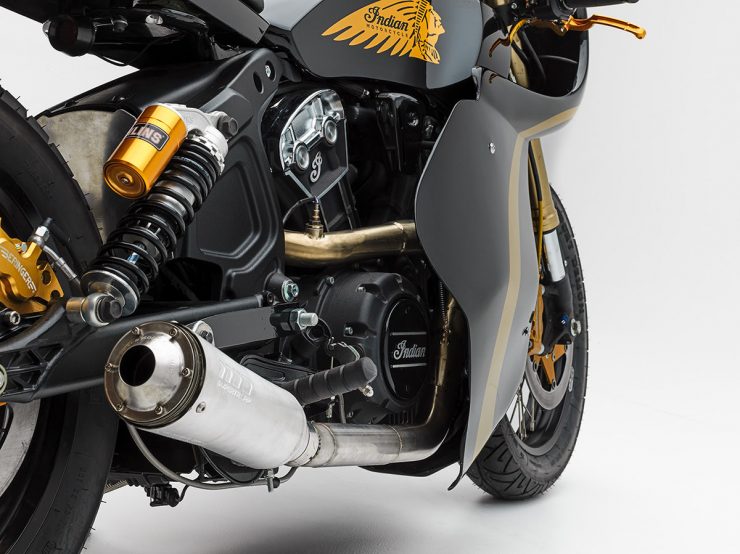 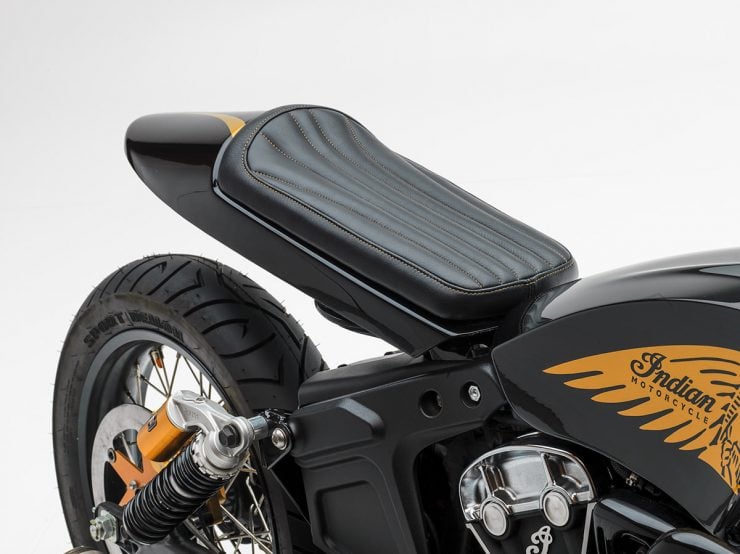 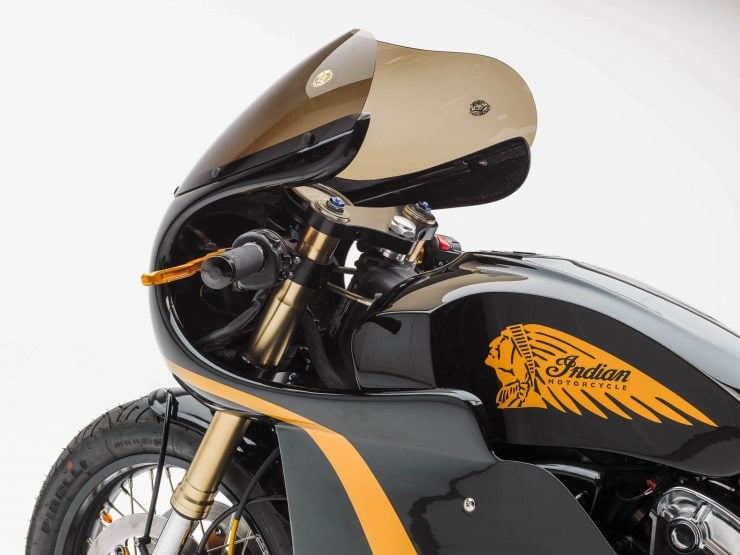 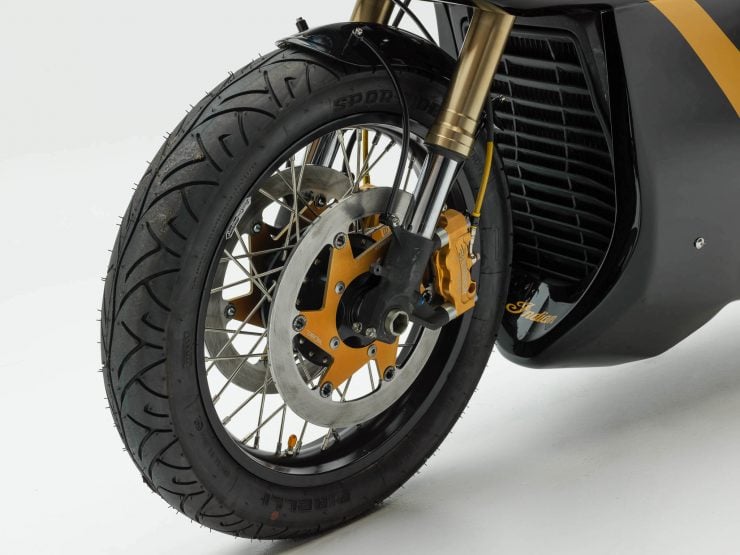 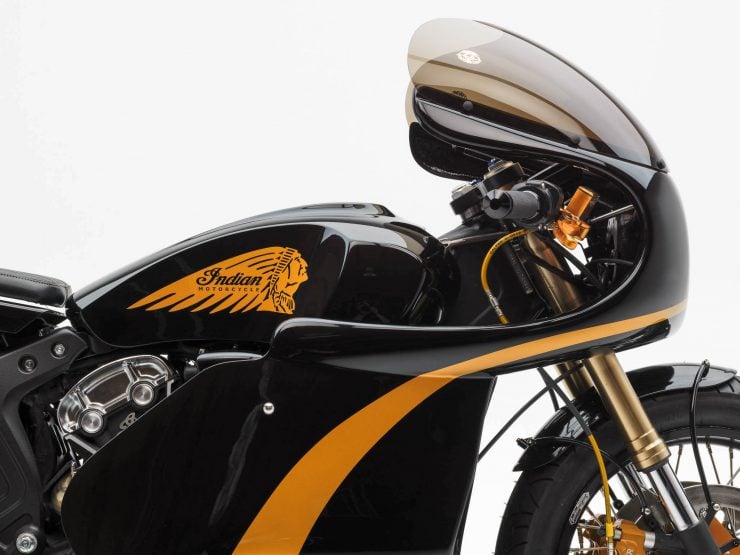 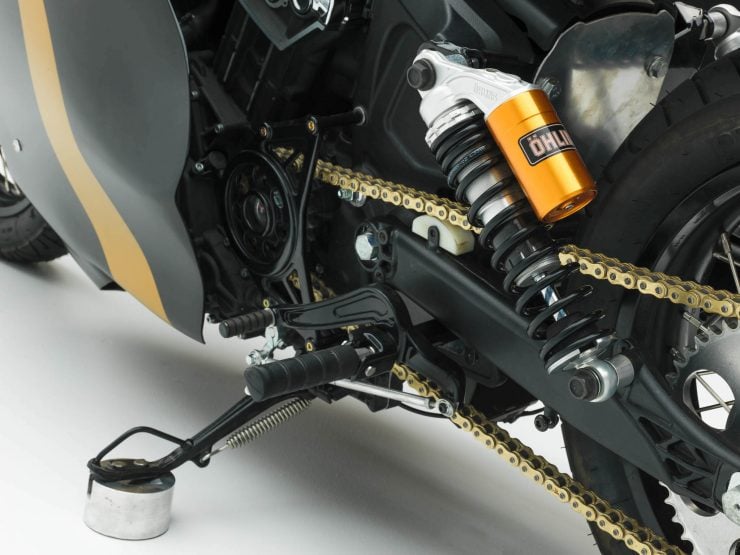 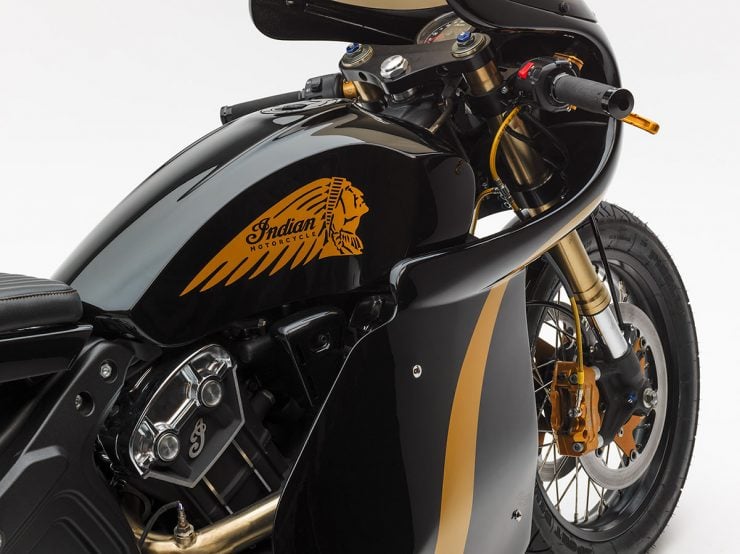 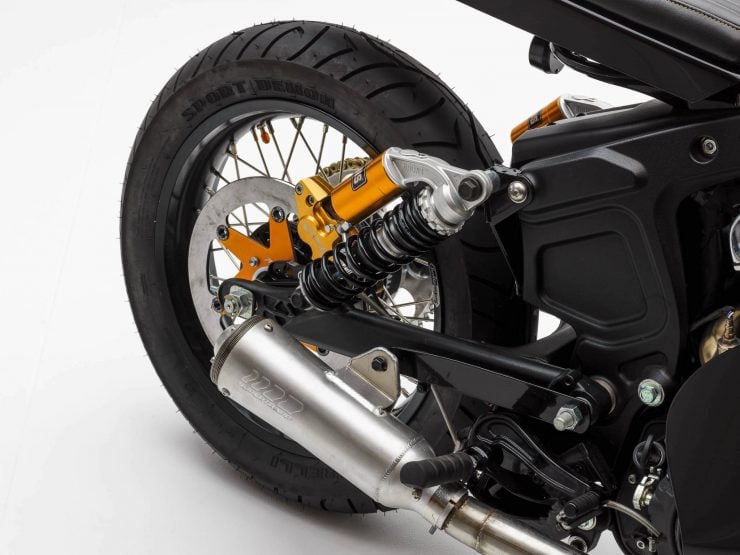 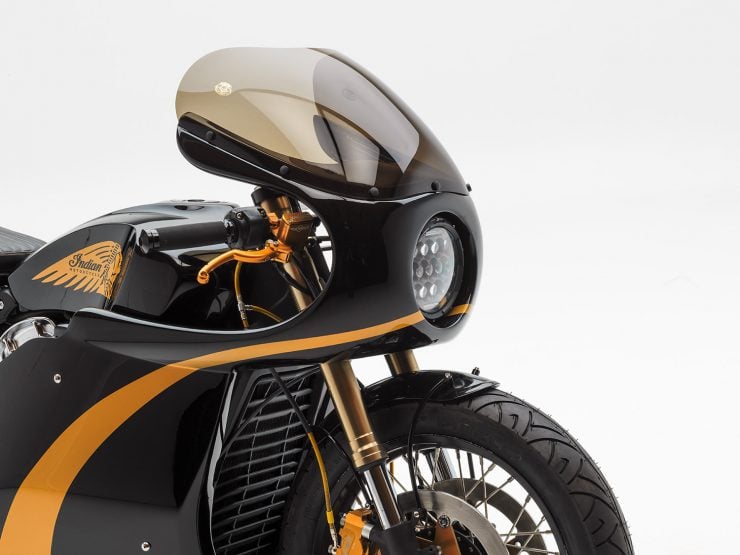 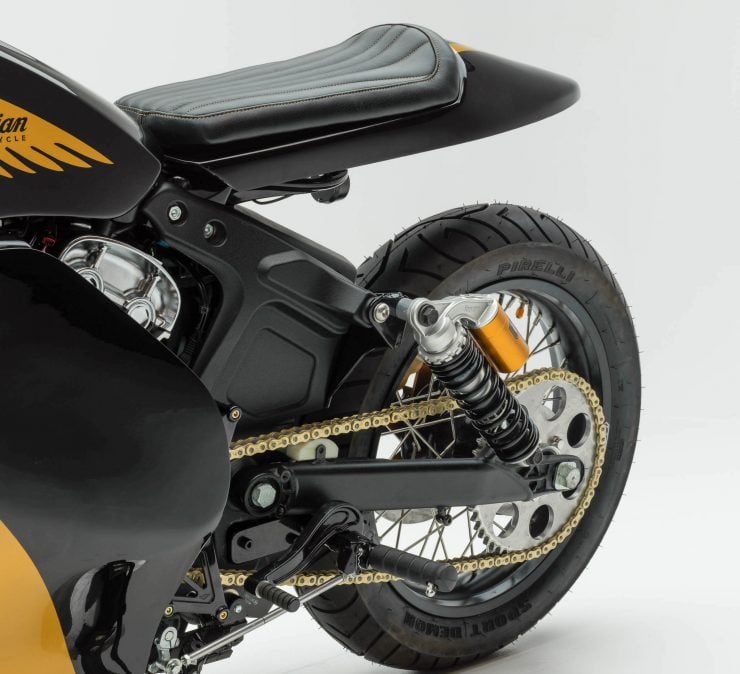 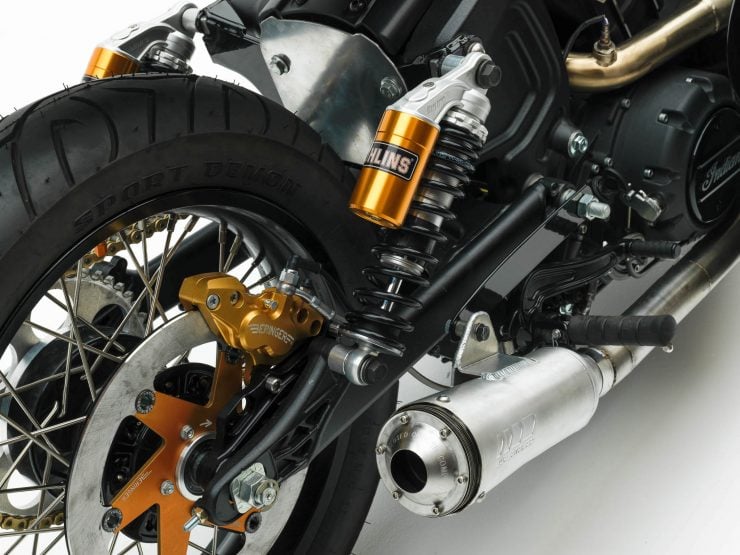 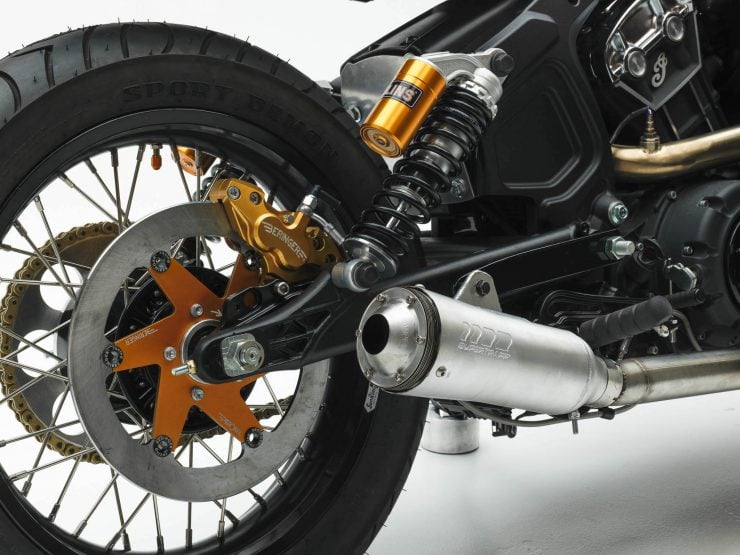 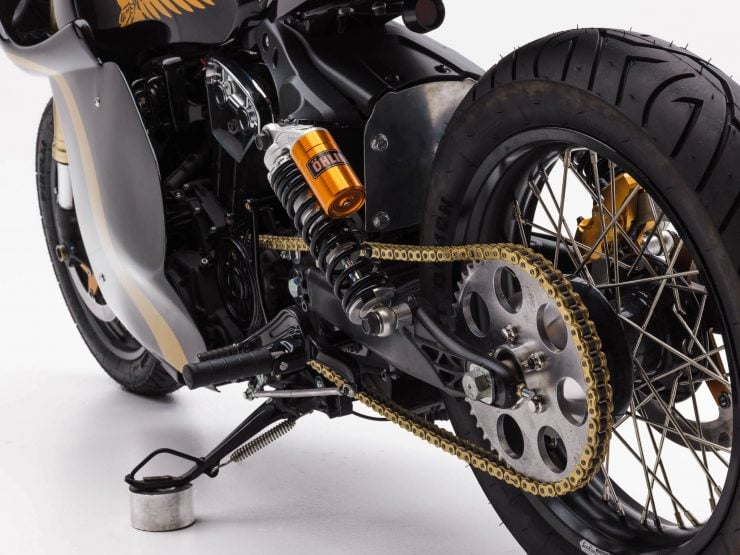