Land Rover began to develop a lightweight version of the short wheelbase Series IIA in 1965 that could be slung beneath the Westland Wessex helicopter, which had a maximum carrying capacity of 2,500 lbs. The plan was for special forces and British marines to use the new lightweight vehicle for rapid helicopter insertion behind enemy lines and into war zone hotspots.

The standard short wheelbase Series IIA tipped the scales at 2,906 lbs, so a strict redesign was undertaken to lose weight and narrow the track width by 4 inches so it would fit on a standard pallet and be loaded two-abreast into the Argosy transport aircraft.

A series of modifications made to the Series IIA: non-essential items were removed, a revised body was designed for lower weight, with easily detachable body panels. The roof, the upper parts of the body, the doors, and the windscreen were all quickly removable for air travel – they would then be reattached after arrival.

Land Rover built two major iterations of the Lightweight, the Series IIA based model and the later model based on the newer Series III. Both were short wheelbase vehicles that looked largely the same to the unfamiliar eye, but the Series III model was fitted with headlights further to the side to comply with new road laws.

The Lightweights are probably most famous for their unusual looks, the signature Land Rover front end was completely revised with much lower fenders and a modified hood, giving an altogether different first impression.

Over the course of the 1968 to 1984 production run almost 38,000 were produced, and today they remain popular with enthusiasts and collectors who love their unusual appearance. The slightly narrower track width and lower weight has also made them popular for exploring off road.

A lot of these lived very rough lives in the military, many more faced tough lives in civilian hands later, so it’s not known exactly how many survived to the modern day. What we do know is that Lightweights, or “Air Portables” as they’re sometimes called, typically fetch a price premium over their regular counterparts.

The Land Rover Series III Lightweight you see here is a 1978 model, it’s fitted with the tough 2.25 litre OHV inline 4-cylinder engine offering a conservative 73 bhp at 4,200 rpm, and it’s mated to a 4-speed manual transmission. It has both high and low range, with disengageable four wheel drive.

This vehicle was imported from Italy, it has been previously restored and it now features a removable safari roof, a double layer roof designed for warmer climates that helps to keep the cab cooler. It’s now finished in dark green with a white roof, it’s rolling on traditional steel wheels with the correct narrow tires, and there’s a spare tire mounted to the hood.

Importantly, this Lightweight is also fitted with an overdrive. This gives a 5th gear of sorts, allowing highway driving at lower engine revs, saving both fuel and wear and tear. If you’d like to read more about this vehicle or register to bid on it you can click here to visit the listing on Bonhams.

Above Video: A pair of Land Rover Lightweights greenlaning around Reading in England. 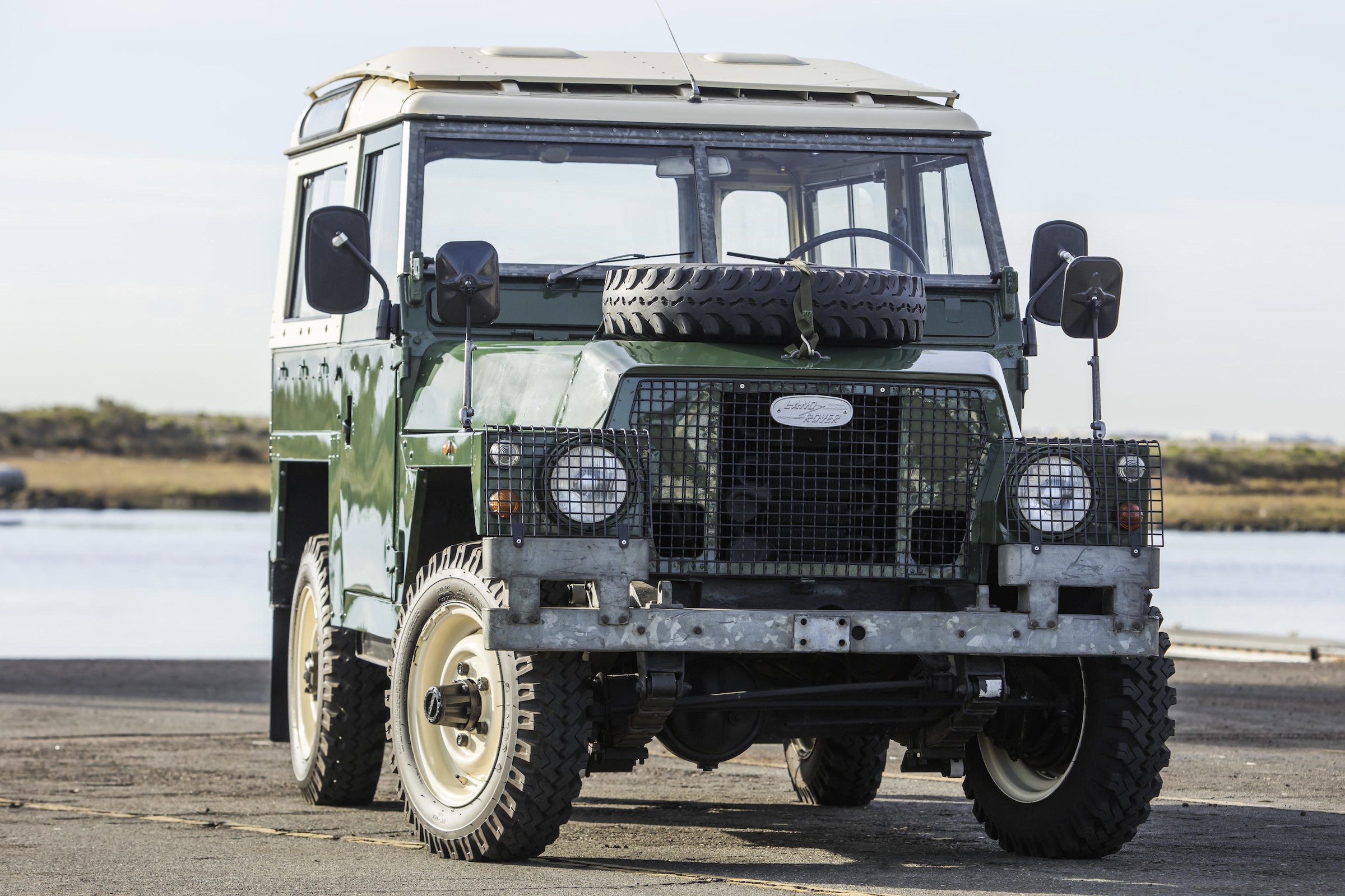