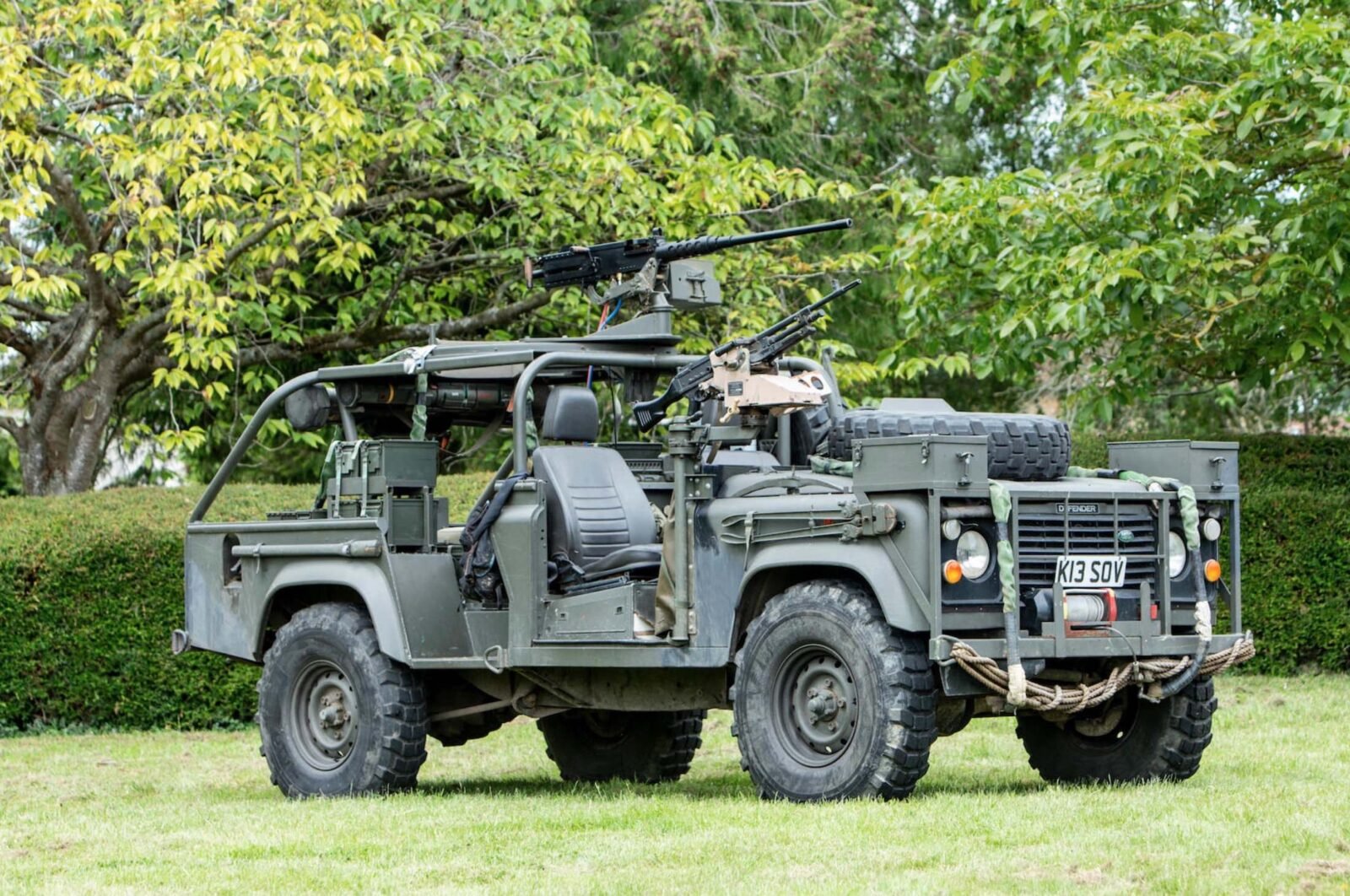 This Land Rover Defender SOV (also known as the RSOV) was originally built as a prototype for the American Special Forces, specifically the US Army Rangers.

The vehicle was one of three prototypes built and saw extensive military service, it’s also been demonstrated in the Middle East and at arms exhibitions, and it’s been featured in documentaries, books, and magazines.

The Land Rover Special Operations Vehicle or (SOV / RSOV) was developed for the American Special Forces in the early 1990s. The narrower track width, smaller size, and lower weight compared to the standard American Humvee (HMMWV – High Mobility Multipurpose Wheeled Vehicle) made them appealing to US military personnel who needed to be able to move quickly through narrow Middle Eastern alleyways – it’s also light enough to be deployed by helicopter.

The SOV is also known as the RSOV, or Ranger Special Operations Vehicle, as they’re most commonly used by the US Army Rangers. 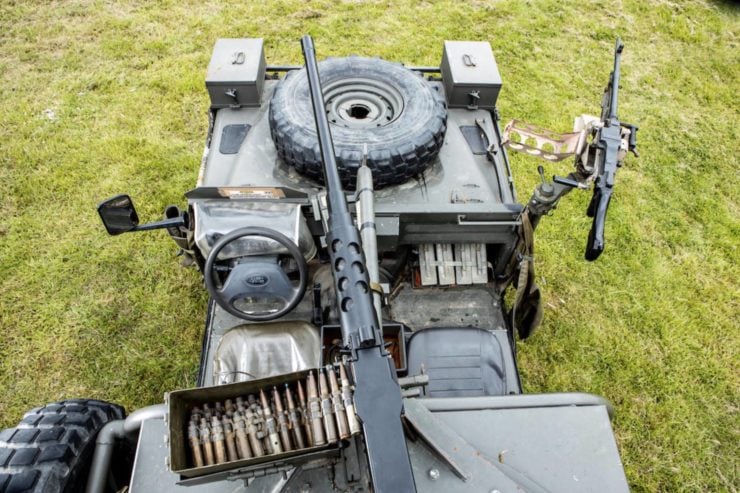 There are three main types of RSOV: a weapons carrier, a medical vehicle, and a communications vehicle.

As a weapons carrier it’s equipped with a variation of M2 .50 machine guns, M240 7.62mm belt-fed machine guns, MK19/MK47 40mm grenade launchers. It can also carry 6 to 7 Rangers and their gear. The medical variant is equipped with up to 6 removable stretchers and seating for the driver and medical team. The communications vehicle is fitted with radios, satellite communications gear, and additional batteries.

The most common variant is the weapons carrier, the Rangers typically have a few dozen to as many as 60 at any one time. As the vehicle you see here is a prototype it’s fitted with a 3.5 litre Rover V8, the modern RSOVs are fitted with four-cylinder turbo diesels.

Although many think of the Rover V8 as a thoroughly British engine, it actually started life in the USA as a Buick engine before the rights and tooling were bought by Rover in the 1960s. So in a way, it was a perfect engine for an American military vehicle. 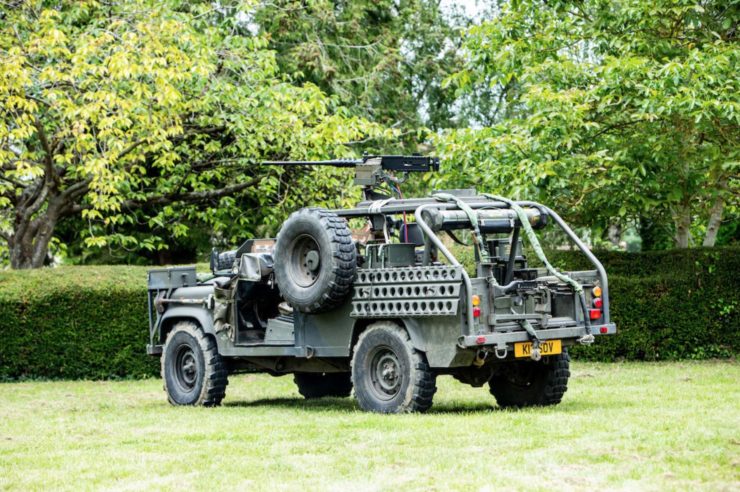 Each SOV/RSOV is built by the Land Rover Special Operations Vehicle department before being shipped to the USA. This example has a 5-speed manual gearbox with uprated suspension, it keeps the same high and low range transfer case as the standard Defender, and four wheel disc brakes.

The Special Operations Vehicle department add a full roll cage, gun mounts, a spare tire carrier on the hood and left side of the vehicle, and a slew of other military-specific upgrades. It’s relatively rare for genuine RSOVs to come up for sale, they’re typically highly sought after when they do become available – much like the Land Rover Pink Panther used by the SAS.

The vehicle you see here will be of particular interest to collectors due to the (aforementioned) fact that it’s one of just three original prototypes.

It’s now equipped with two replica GPMG machine guns and 1 replica .50 calibre machine gun mounted up top, bolted around the side of the vehicle are bolt cutters, a shovel, sand ladders, an electric winch, recovery rope, metal storage tins, some ammunition cases, and what appears to be a surface to air missile tucked up under the back of the roll cage.

It’s due to roll across the auction block with Bonhams on the 26th of September at the Bonhams MPH September Auction which will be held at Bicester Heritage. It’s estimated to be worth between £80,000 and £100,000 and you can click here if you’d like to read more or register to bid. 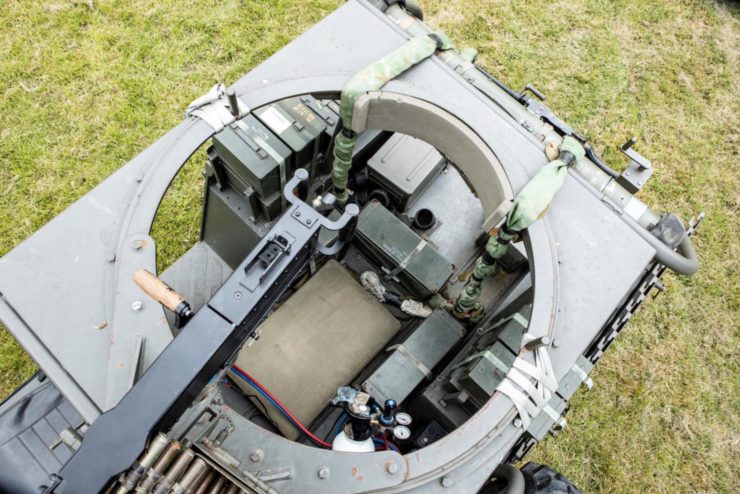 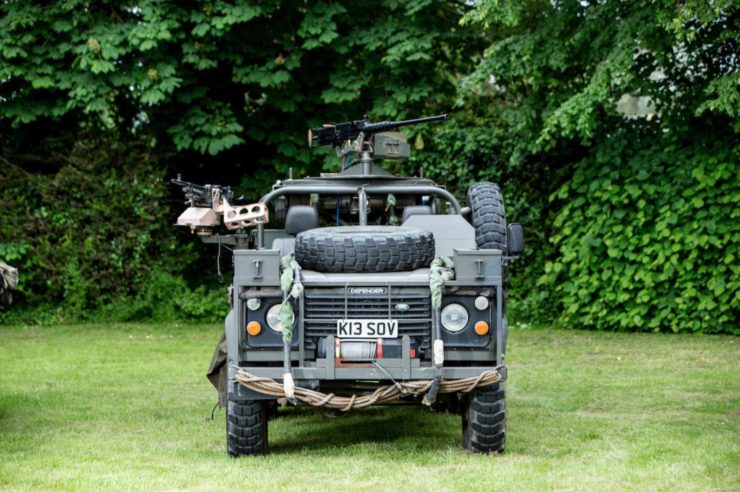 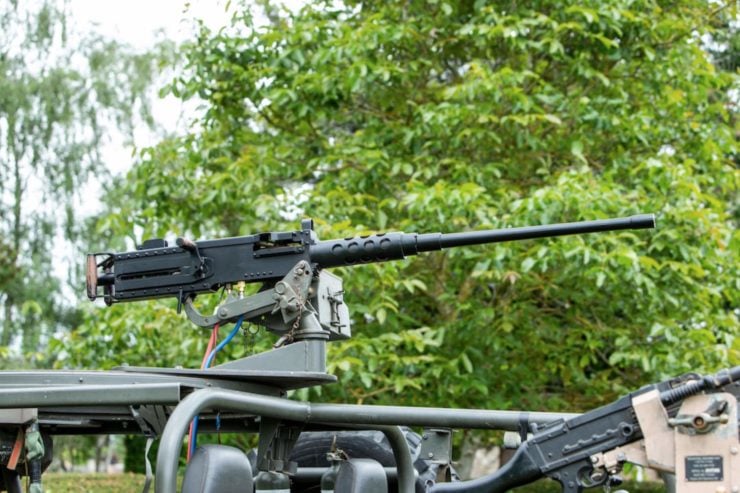 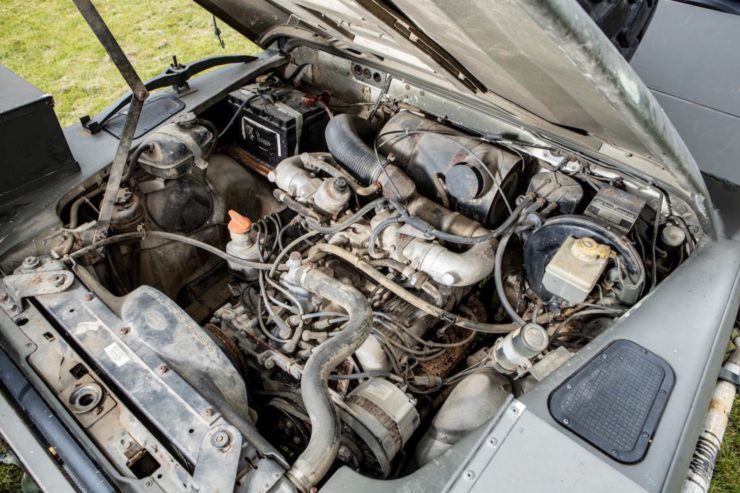 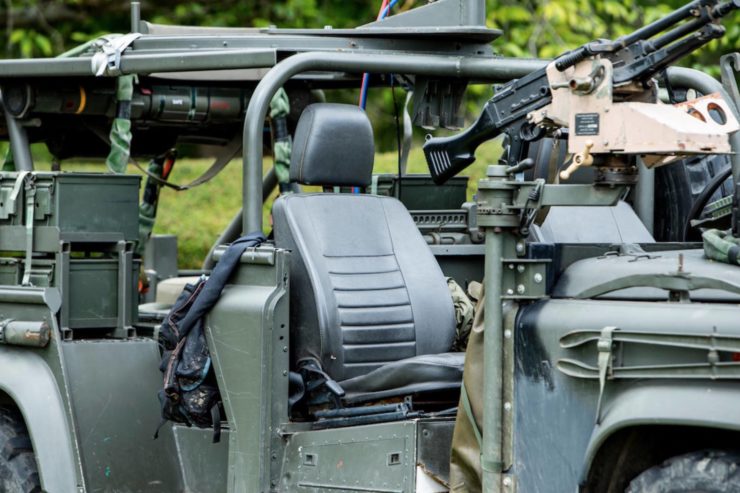 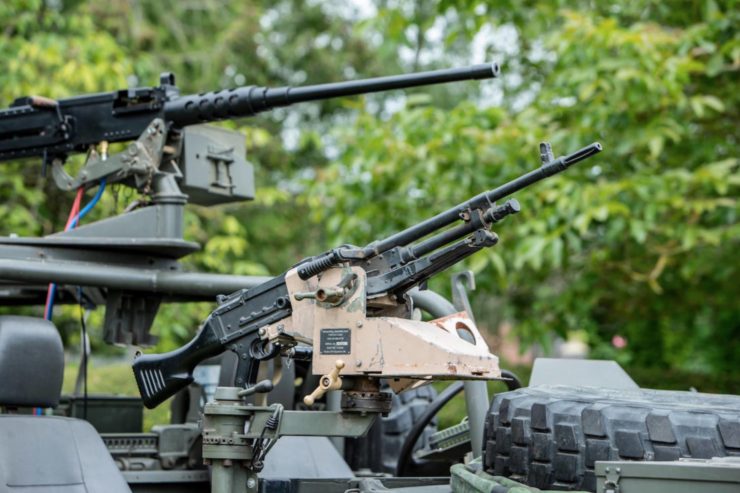 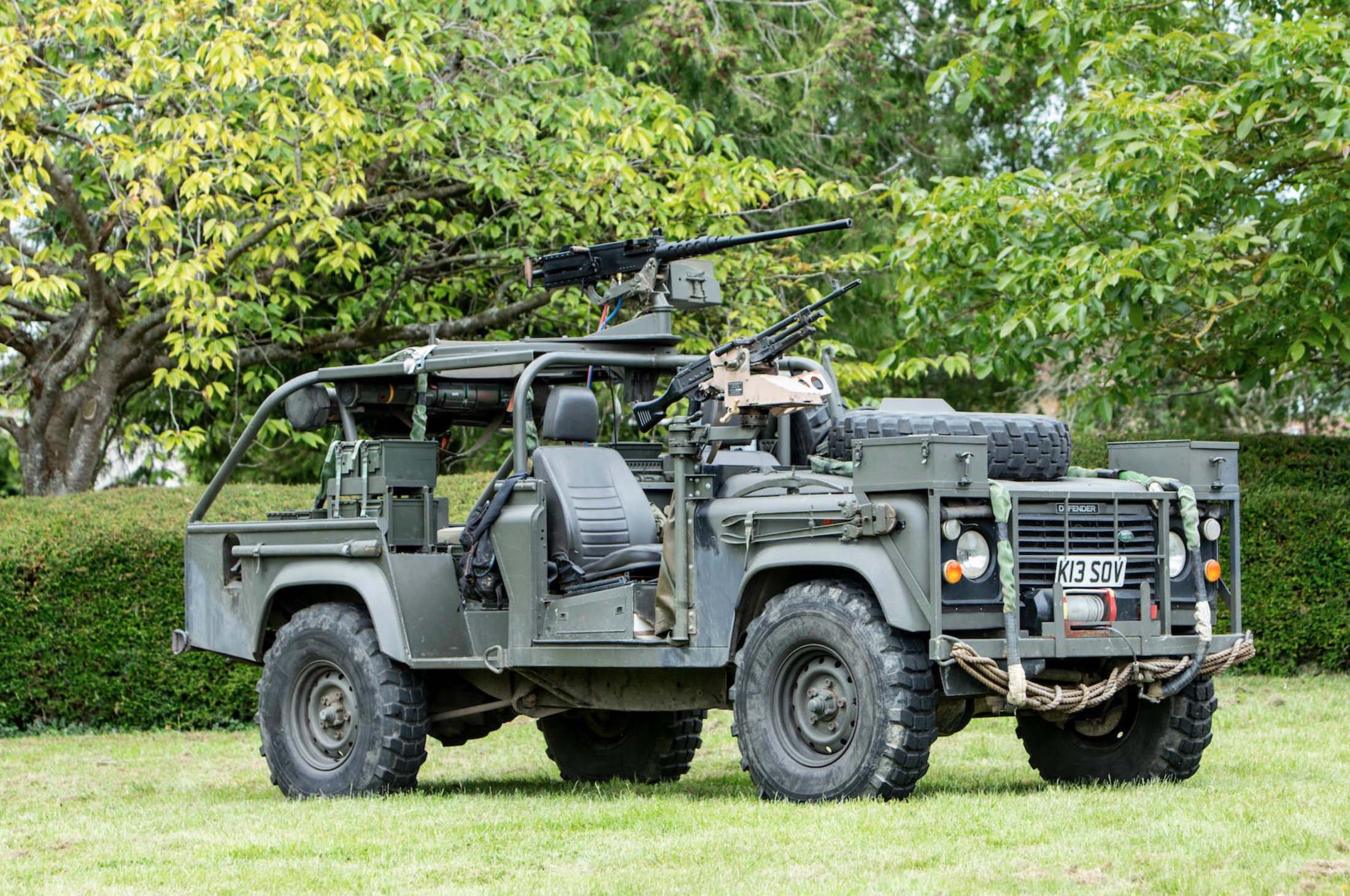