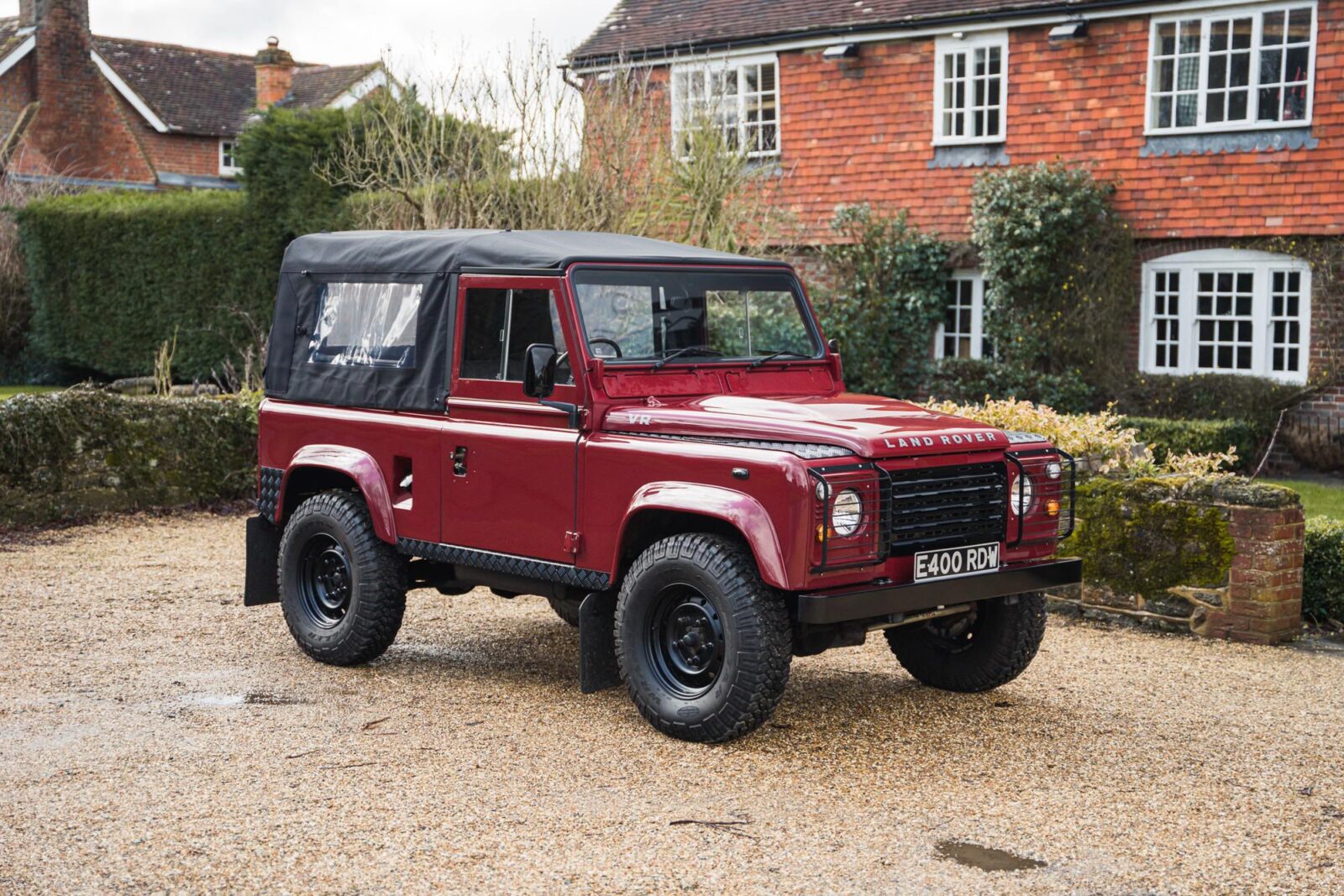 The marriage of the Land Rover Defender and the ubiquitous 3.5 litre Rover V8 first occurred in the 1980s when it was first offered as an engine option from the factory. It would be the most powerful engine factory-fitted to the Defender (or earlier Series Land Rovers) up until that point in history.

Although not as economical as the diesel options, and not as cheap to run as the smaller petrol engine, the Rover V8 was as close to perfect for the Defender as any engine could be.

The Rover V8 is an all-alloy engine so it doesn’t add weight over the front axle compared to the original iron block engine, in fact its slightly lighter depending on final configuration at 170 kgs (370 lbs) vs 205 kgs (450 lbs). The improved performance when the V8 is mated to a 5-speed gearbox also gives the Defender the ability to comfortably cruise at modern highway speeds without sounding like the conrods could shoot through the block at any moment.

The Rover V8 was never as popular with buyers as the diesel and smaller petrol engine options and as a result they’re reasonably rare now – and much in demand. It’s become increasingly common for people restoring Defenders (and Series Land Rovers) to fit the Rover V8 and mate it up to a more modern 5-speed gearbox – transforming the vehicle in the process.

Of course the mileage will never be as good but the instant throttle response and huge torque increase help significantly with any serious off-roading. 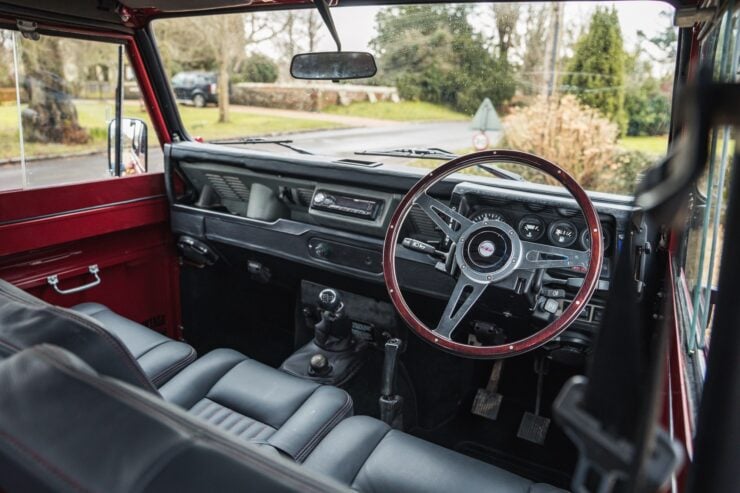 Above Image: This Defender benefits from a restored interior with new upholstery, door cards, and a tasteful wood rimmed steering wheel.

As the classic car world becomes increasingly aware of vintage 4x4s we’re seeing far more interest paid to them, and as a result an entire industry has grown in recent years to restore, modify, and improve them.

The Defender you see here has been comprehensively restored, all body panels have been replaced with the exception of the front wings and rear tub. Unusually this car has had both a refurbishment, and later a full restoration, the latter taking place at the workshops of Vintage Reborn.

Unusually this vehicle has been fitted with a Land Rover Puma-generation bonnet and “Series” doors – as these come with removable tops that better suit top-down driving.

It’s now finished in the Ferrari hue of Rosso Rubino with black trim items including the stainless-steel front grille, headlight guards and chequer plate panels which are fitted to the sills and the tops of the front wings.

The new black fabric hood was supplied by Land Rover specialist Exmoor Trim, it’s fitted to a heavy-duty frame, and the car also comes with a new bikini hood for the summer months. The Defender is now riding on a set of new 16-inch steel wheels fitted with chunky Goodyear Wrangler tires. 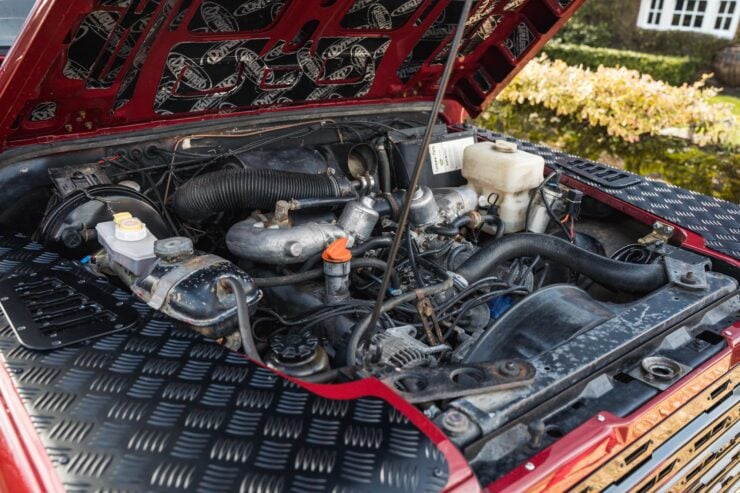 Above Image: The Rover V8 is approximately 34 kgs or 75 lbs lighter than the more common iron block four cylinder engine.

Inside you’ll find that the three seats have been fully re-trimmed in fluted black leather with red stitching, it also has a wood-rimmed steering wheel, and in the rear, folding benches provide additional seating for up to four passengers.

In order to provide modern security the car is fitted with a Category 5 tracker with digital app controls, and the rear heater element has also been converted to function as a discreet engine isolator switch.

The Rover V8 and the 5-speed transmission have been restored, the vehicle also benefits from a full disc-brake conversion – a smart upgrade given the added power. If you’d like to read more about this Defender or register to bid you can click here to visit the listing, it’s currently on Collecting Cars with three days left on the bidding at the time of writing. 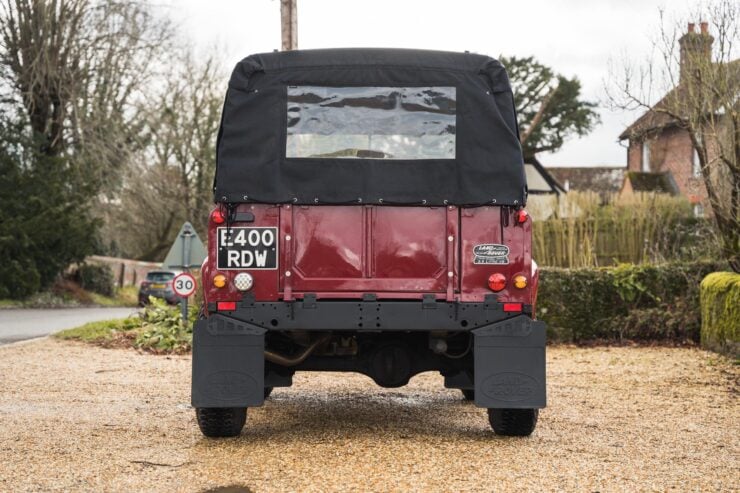 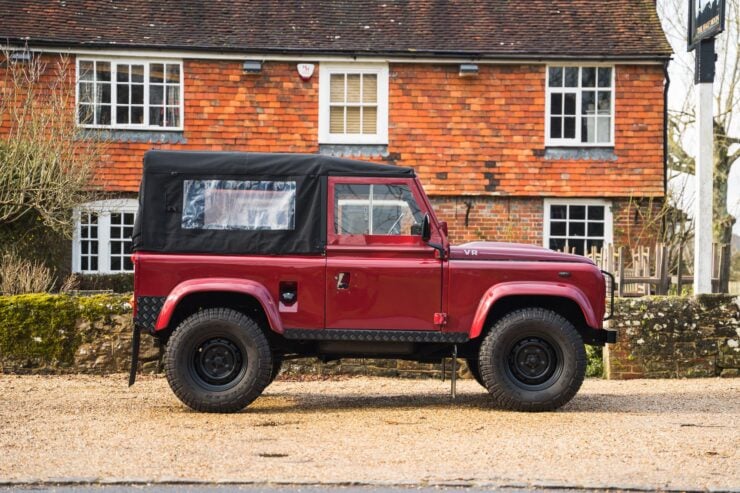 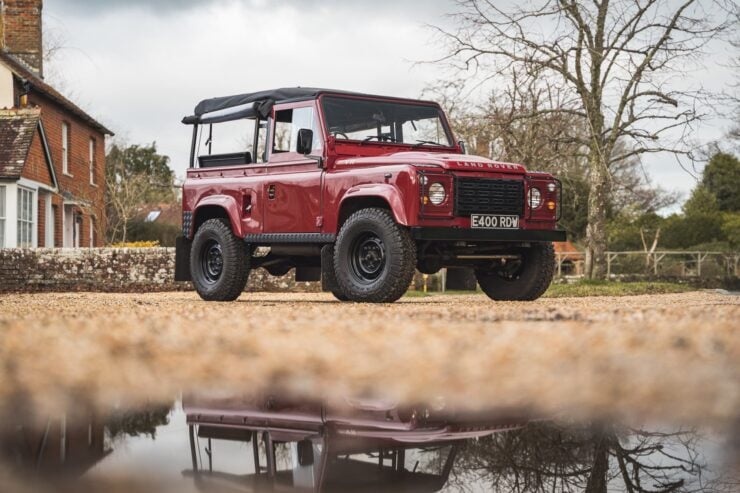 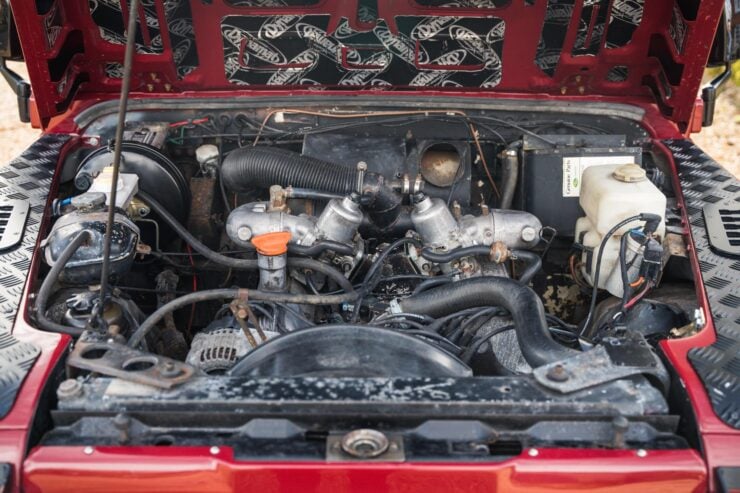 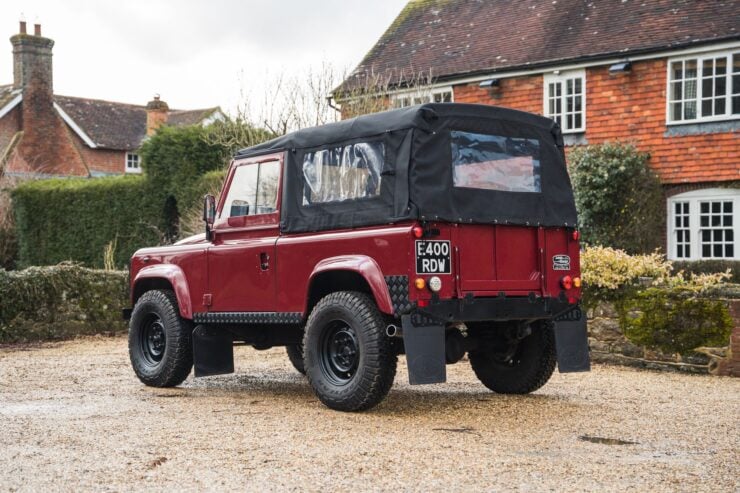 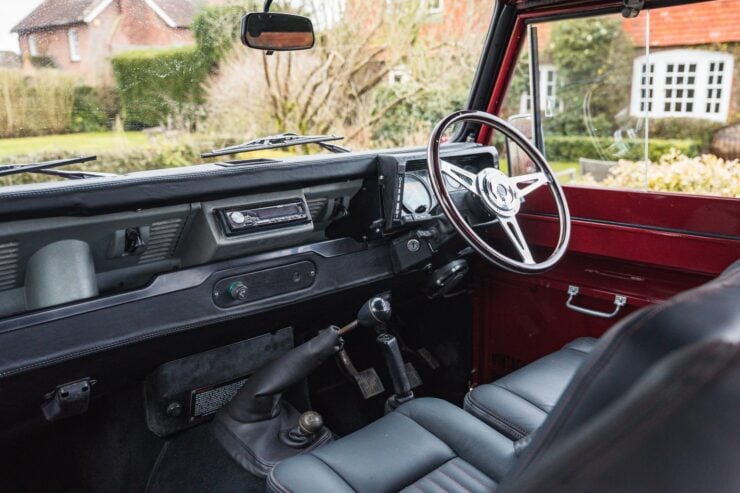 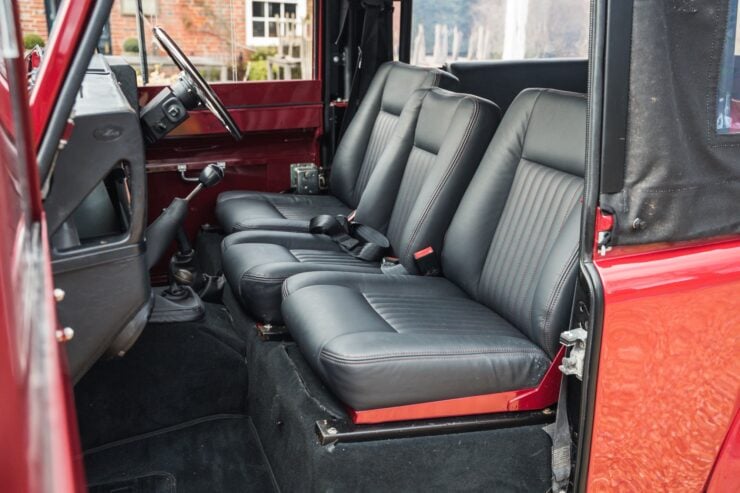 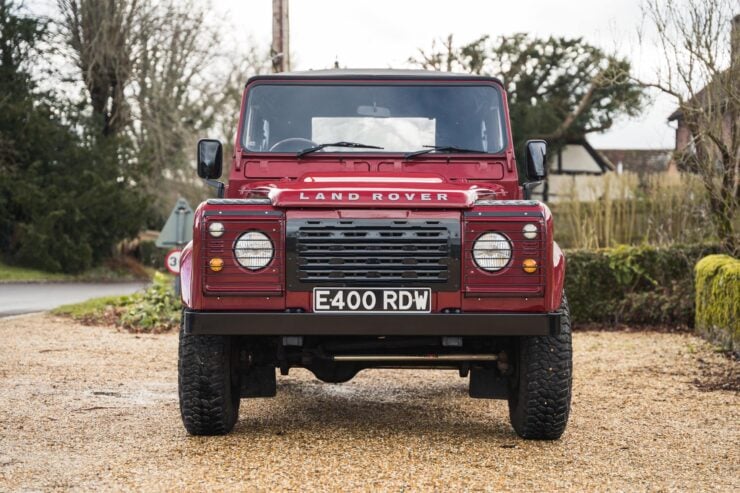 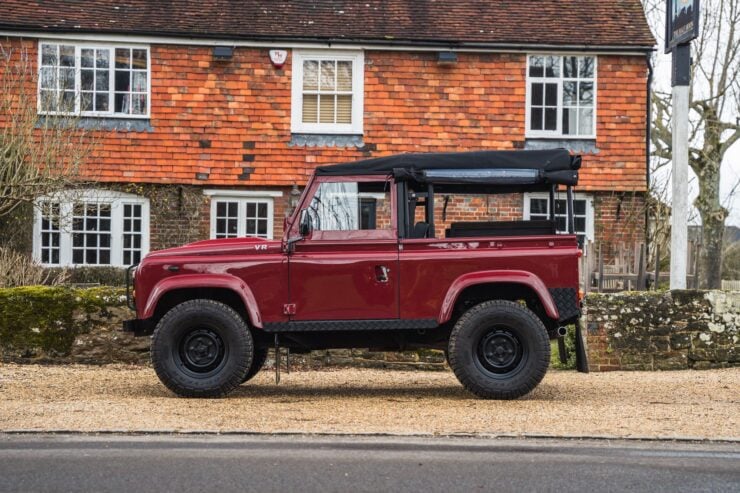 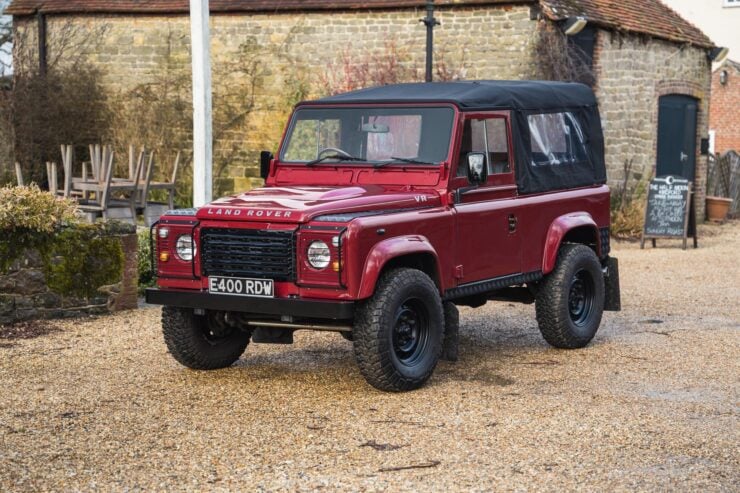 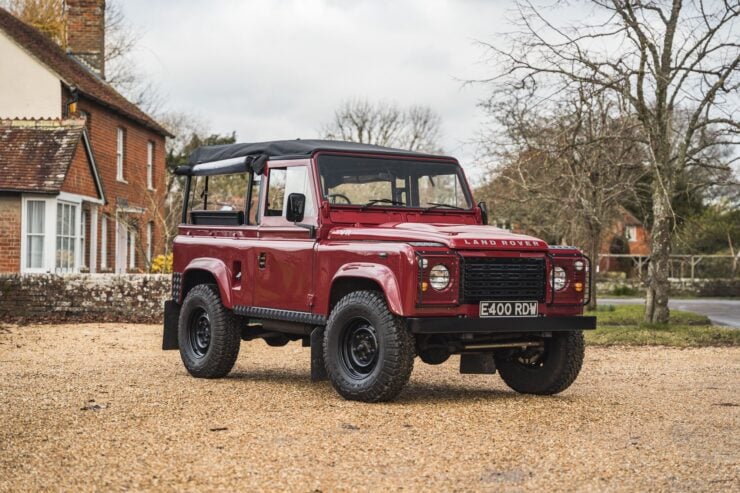 Published by Ben Branch - March 1st 2021
Related Posts
Vintage Documentary: Is This The Car Of The Future?