On April Fools Day of 2019 the American knife maker Ka-Bar made a comical post on their social media channels about a new model – the “Space-Bar” fighting knife designed for the then-new United States Space Force.

As it happens people loved the idea, so much so that Ka-Bar went and trademarked “USSF” for use in knife and tool making, so they could actually make the Space-Bar a reality. While it has its roots in comedy the knife itself is just as capable as any of Ka-Bar’s other battle-tested knives.

Back in the real world Ka-Bar would actually be an ideal company to make a knife for the USSF if they ever required it, Ka-Bar has been building standard issue fighting knives since the Second World War.

The Space-Bar comes with an unusual grey powder coated exterior with a bright blue handle, and a matching grey hard stealth to attach it to your space suit.

Many of these knives were carried into battle by US servicemen in the Pacific, European, and North African theaters of WWII, as well as the wars in Korea, Vietnam, Iraq, and Afghanistan.

The Space-Bar has a 7″ Bowie-style blade made from 1095 carbon steel at 56-58 Rc. It has an unusual grey powdercoated surface that offers excellent corrosion resistance, and the steel butt and guard are powder coated to match the blade.

The handle of the knife is an eye-catching bright blue Kraton G, and each knife comes with a hard plastic sheath in grey to match the blade. The knife weighs in at 10.4 oz and it’s made in the USA. 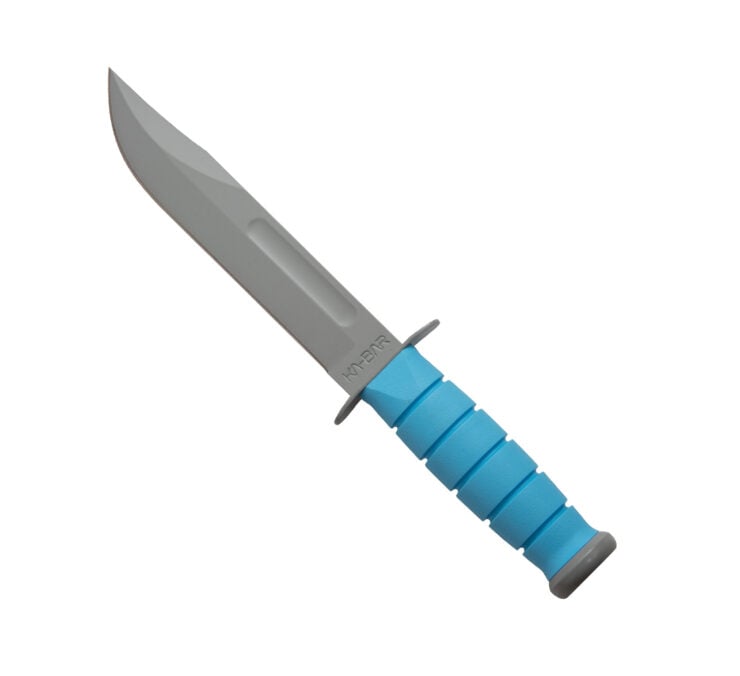