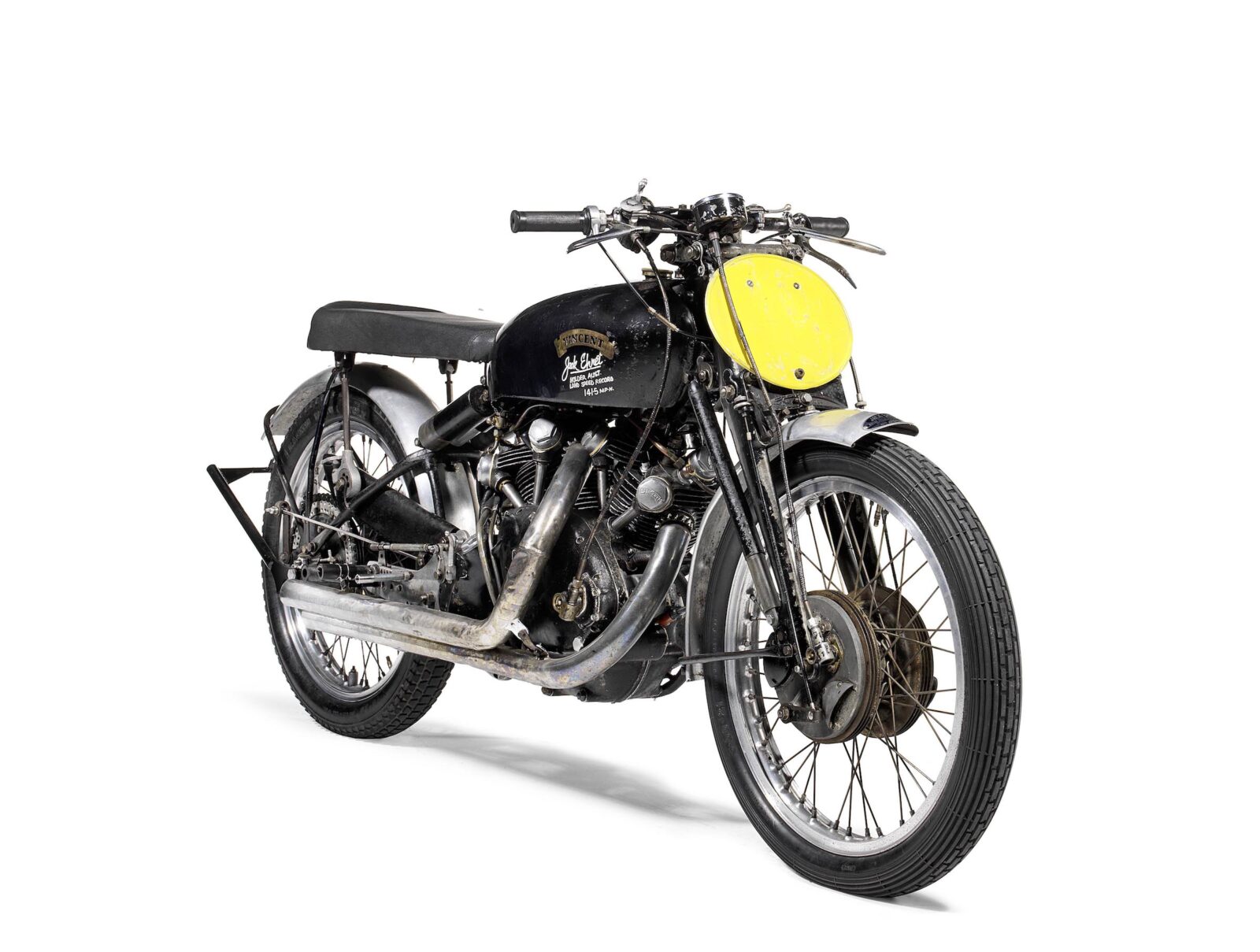 Jack Ehret, the Black Lightning, and the road near Gunnedah

On January 19th, 1953 Jack Ehret rolled his Vincent Black Lightning onto the gleaming asphalt near Gunnedah in eastern Australia where a 2 ¼ mile straight straight stretch of road had been closed by an accommodating constable, so Jack could take a shot at setting a new Australian speed record.

What happened next is the stuff of legend, and it’s unlikely to ever be repeated. I don’t fancy anyone’s chances of convincing an Australian policeman to close off a road for 3 days to allow an assortment of young men and their machines to go as quickly as possible with barely a whisker of safety equipment.

As with many historic moments in motor racing, things did not go smoothly for Jack and his Vincent. His fastest run was 149.6 mph but the timing equipment had failed, and so the speed couldn’t be officially recorded. Jack set off for another run but returned to the pits with a sullen look and a broken gear shifter, the mechanics set to work looking for a quick fix but without a welder their options were limited. 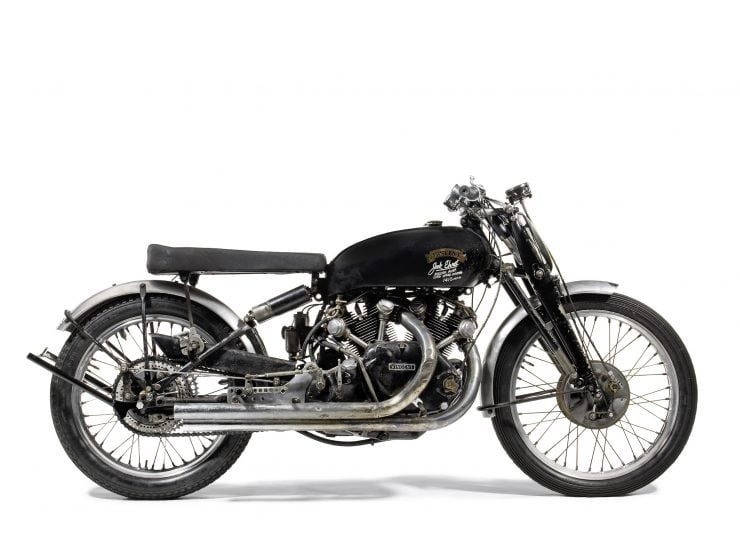 One of the men realized he could probably hammer a tube spanner onto the remaining part of the shifter – a crude fix but with some thumping and a little electrical tape the Vincent was once again able to change gears – albeit with some fiddling.

Jack once again set off under the watchful gaze of the friendly constable, his gear changes were noticeably slower but the tube spanner was working and he managed two more runs, with an average time of 141.509 mph – a new Australian record.

Jack would keep the Vincent Black Lightning for another 47 years, a testament to how much it meant to him, only letting it go a couple of years before he passed away in 2001.

Unfortunately, no one knows what happened to the tube spanner. 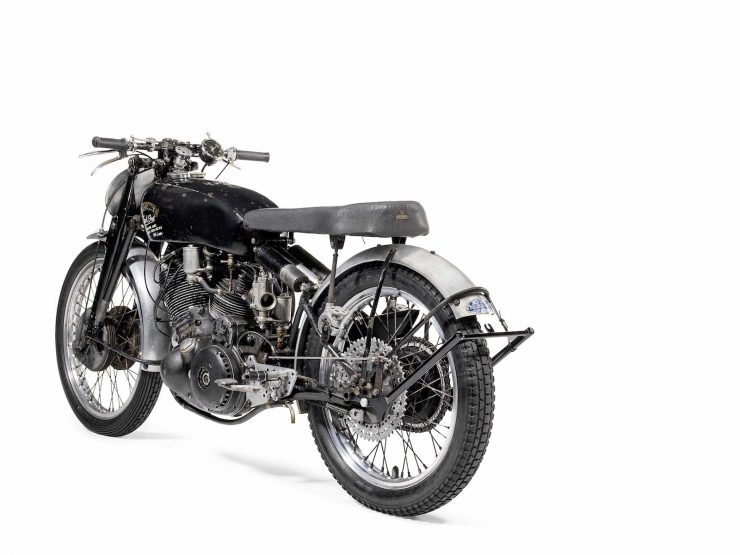 A Brief History of the Vincent Black Lightning

At the heart of both bikes lies an air-cooled OHV V-twin designed by Australian Phil Irving, a brilliant engineer who would later go on to design the 3 litre RB620 V8 that would be fitted to the Repco-Brabham F1 car. Jack Brabham won the 1966 Formula 1 Driver’s Championship and the Manufacturers’ Championship using the Irving engine, becoming the only man in history to win the championships in a car he had designed himself.

Long before his Formula 1 glory days, Irving was working at Vincent-HRD on a replacement for the single cylinder, 500cc Vincent Comet engine. As the story goes, two Comet blueprints were overlapping on his desk in a rough approximation of a V-twin, and Irving had a eureka moment. There’s no hard evidence for this tale, but one should never let the truth get in the way of a good story.

The first motorcycle to use the new Vincent V-twin was the Vincent Rapide, followed by the Black Shadow and then the Black Lightning. All of them shared some advanced-for-the-era design features including cantilever rear suspension, an engine as a stressed member, and a lightweight backbone frame.

The Black Lightning would be the ultimate iteration of this basic design, capable of over 70 hp in race trim thanks to high-performance connecting rods, larger inlet ports, polished rocker gear, steel idler gears, racing carburetors, a manual-advance magneto, and broad weight reductions resulting in a 170 kilogram kerb weight.

The two most famous Black Lightnings are the one ridden by Rollie Free in his swimsuit on the Bonneville Salt Flats in 1948, and the bike you see here – that was piloted by Jack Ehret. Only 31 examples of the model were made in total so they’re all special bikes, but this one will garner much interest when it rolls across the auction block with Bonhams on the 25th of January in Las Vegas.

If you’d like to read more about it or register to bid, you can click here to visit the listing. 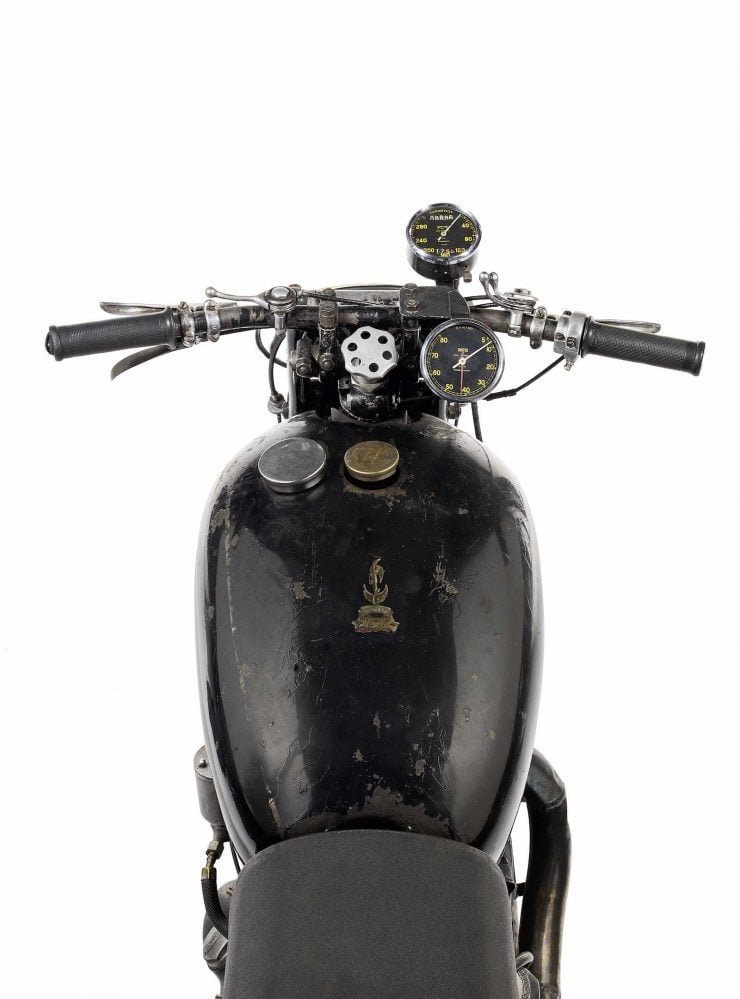 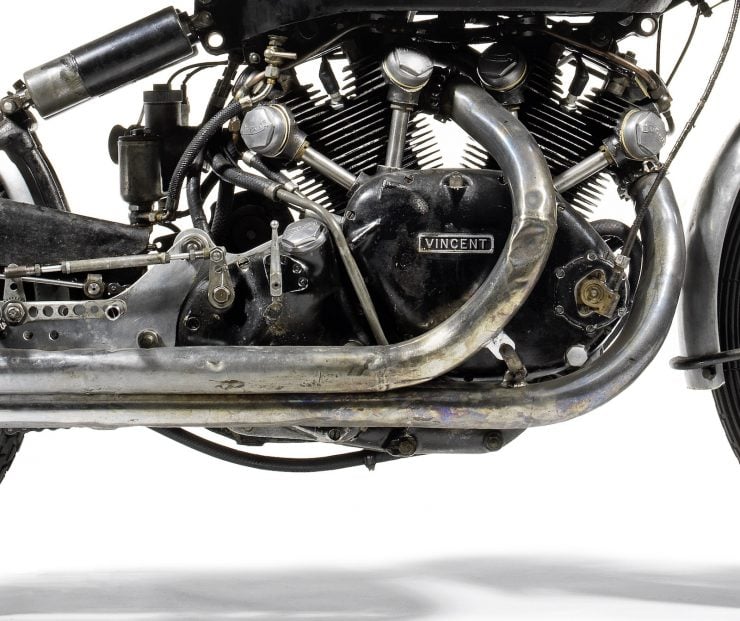 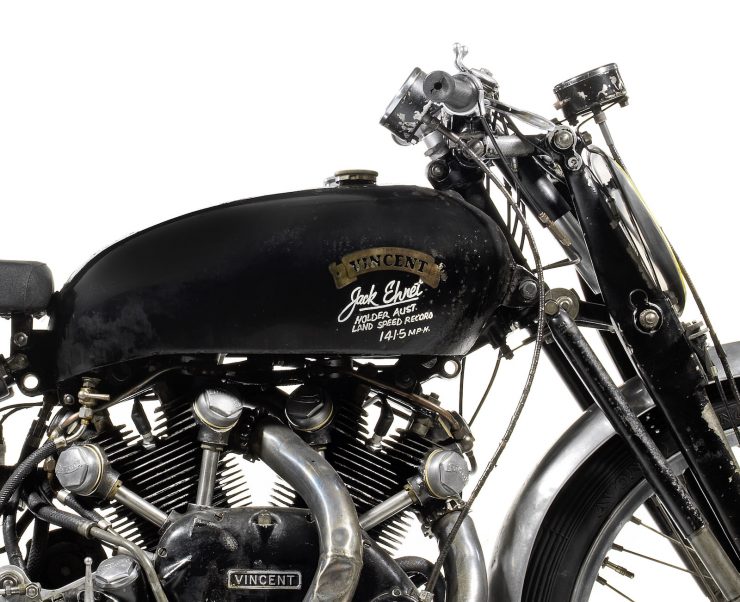 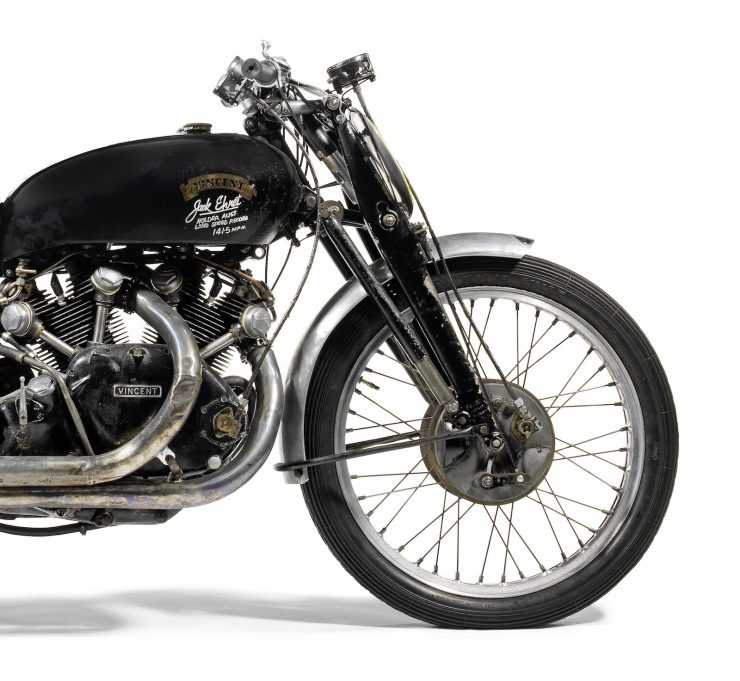 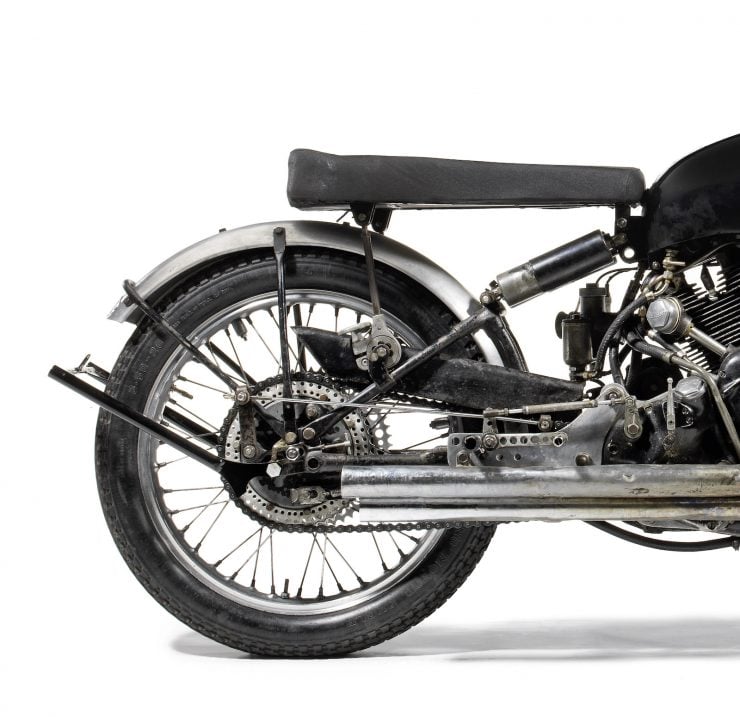 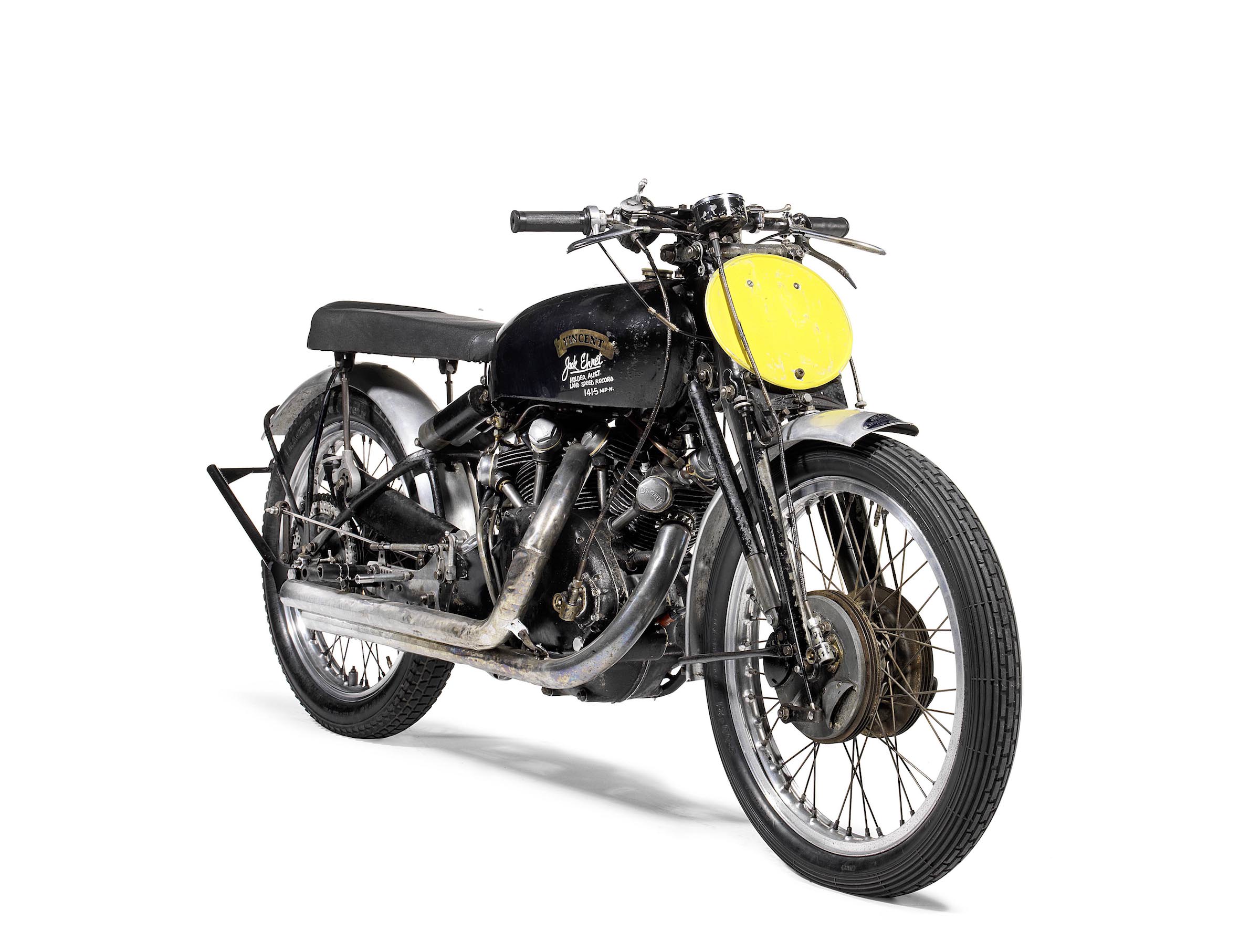