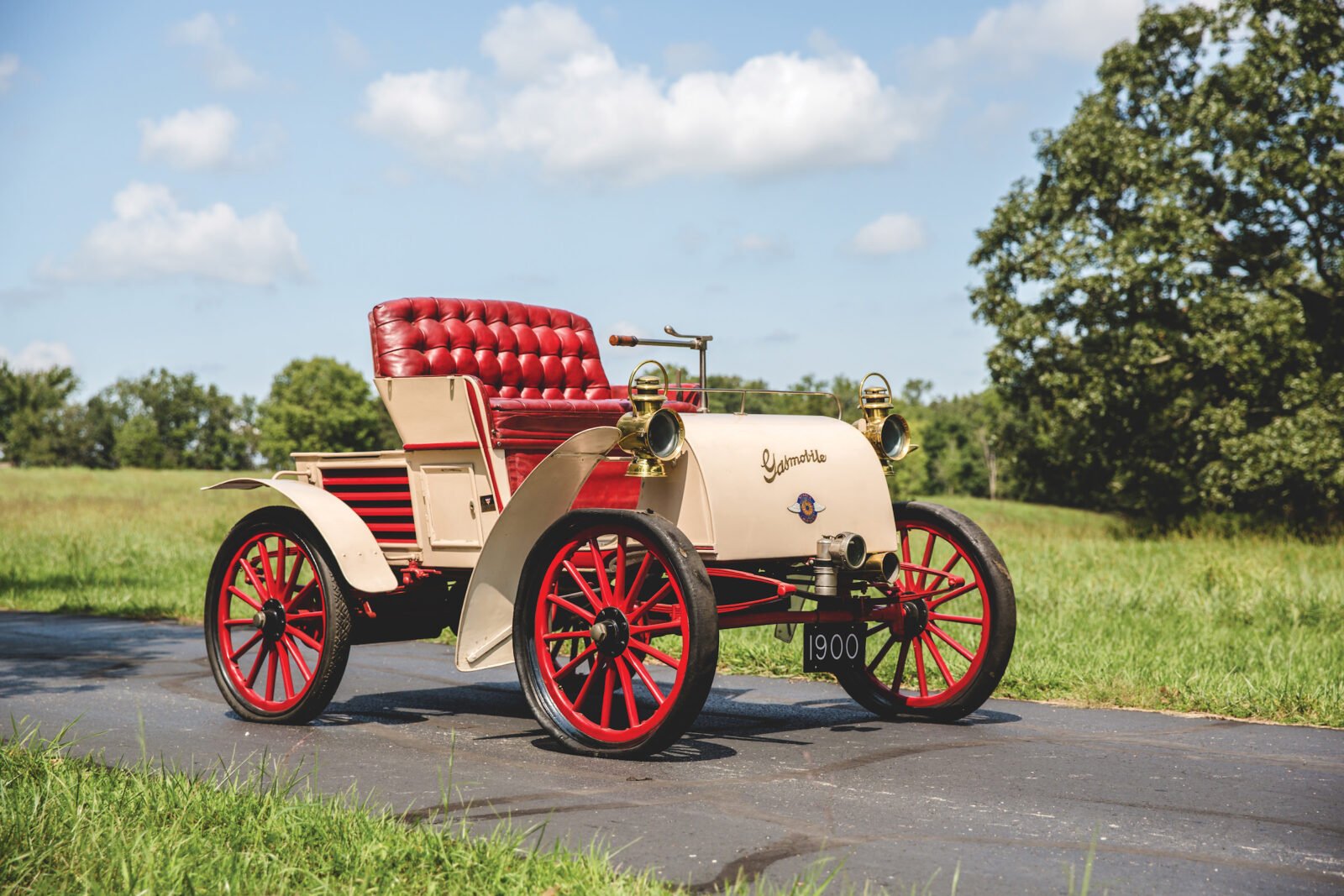 The Gasmobile Runabout was one of the fastest road cars in America in 1900, it might not look like a sports car now but it trounced all comers in the leading auto races of the day – with its mighty 3 hp engine and top speed of 25+ mph.

The Gasmobile Runabout was built by the rather simply named Automobile Company of America from 1899 till 1902. Although the name Gasmobile might seem strange today but it was chosen to differentiate it from the steam, electric, and horse drawn vehicles of the time.

The Automobile Company of America shown a lot of promise, but perhaps attempted to expand too quickly for their own good, they had a relatively complex 6 cylinder car on sale all the way back in 1902 – capable of a heady 45 hp and 70 mph. These were unheard of figures for the time and the cars did well in the burgeoning world of auto racing.

Historian Beverly Rae Kimes notes that a Gasmobile won all of the contests staged for gasoline automobiles at the Automobile Club of America’s show at Madison Square Garden in 1900, and in 1901 another won the Long Island Endurance Contest.

The Gasmobile you see here is car number 53, making it one of the earliest surviving examples, it’s powered by a 3 hp, single-cylinder, liquid-cooled gasoline engine. Starting is accomplished using a side-mounted crank handle, steering is accomplished with a tiller, a pair of standard foot pedals control braking and acceleration, and there’s a chain drive to the rear axle. 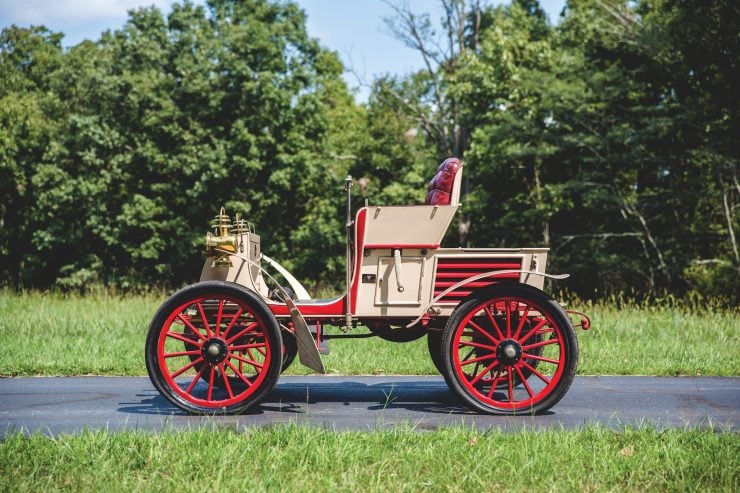 There are front and rear leaf springs, as you’d expect, and headlight duties are handled by a pair of acetylene lamps, with a third lower mounted light for additional illumination. Under the front cowling there’s a simple radiator, with the horn exiting just in front of it on the lower left side, the horn is a foot operated pneumatic unit conveniently placed next to the pedals, so you can stamp on it to clear the common folk out of your way.

Although it looks like a Chesterfield sofa with wheels to the modern eye, it was designed at a time when people were far more used to horse drawn carriages, and this is where it took its design cues.

There are very few surviving Gasmobiles left, this one had been abandoned in a storage company building in the 1950s but after being discovered it was restored in an appealing off-white with red trim and red leather upholstery. Although the restoration is now showing a little patina, it wouldn’t take much to get it back out on the road. Perhaps the first place the new owner should probably start is with a new set of tires, as I think it’s safe to say that the ones it currently has fitted won’t hold air.

There are an ever increasing number of veteran and brass-era automobile events around the world, one of the most noteworthy being the iconic London to Brighton Veteran Car Run which was first run in 1896. This 1900 Gasmobile would certainly qualify for any of these events, and would probably attract quite a crowd to boot.

If you’d like to read more about this car or register to bid you can click here to visit the listing on RM Sotheby’s. It’s due to roll across the auction block on the 6th of October at the Hershey Sale, with an estimated value of between $28,000 and $36,000 USD with no reserve. 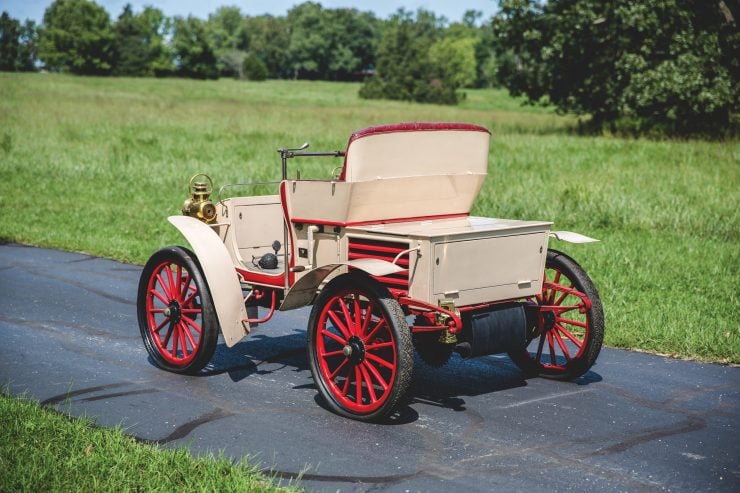 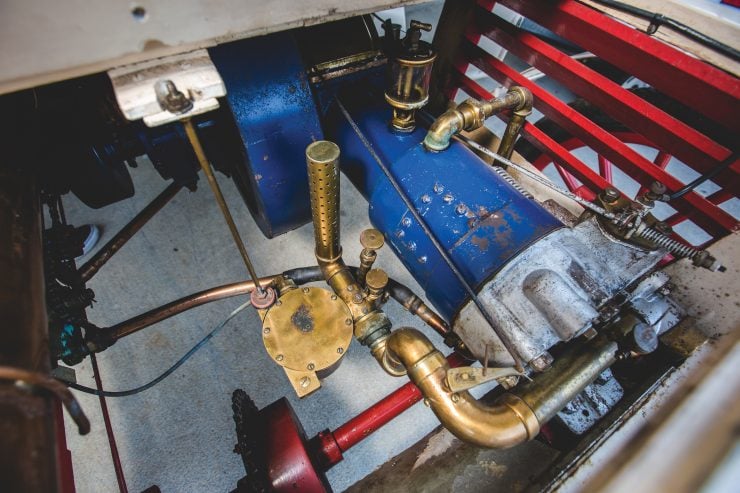 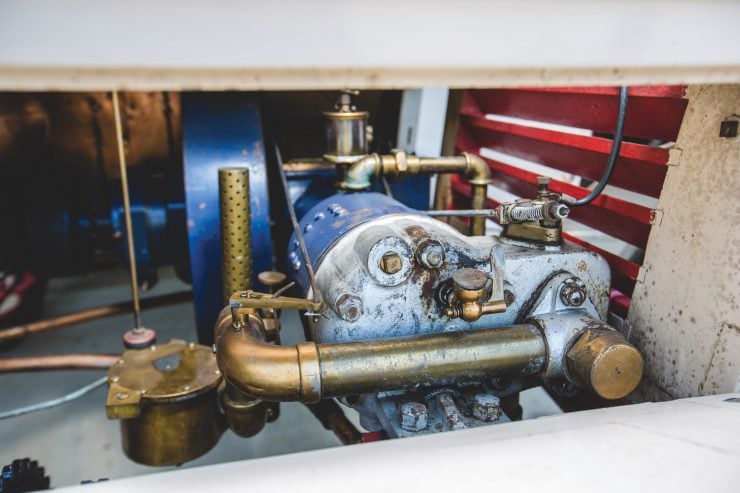 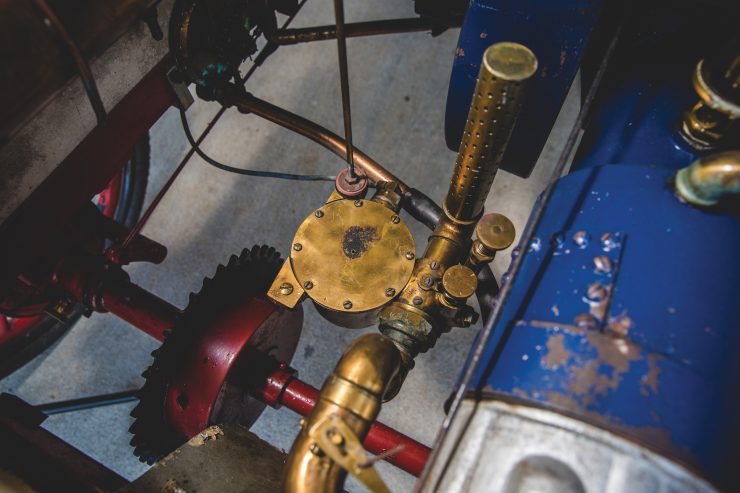 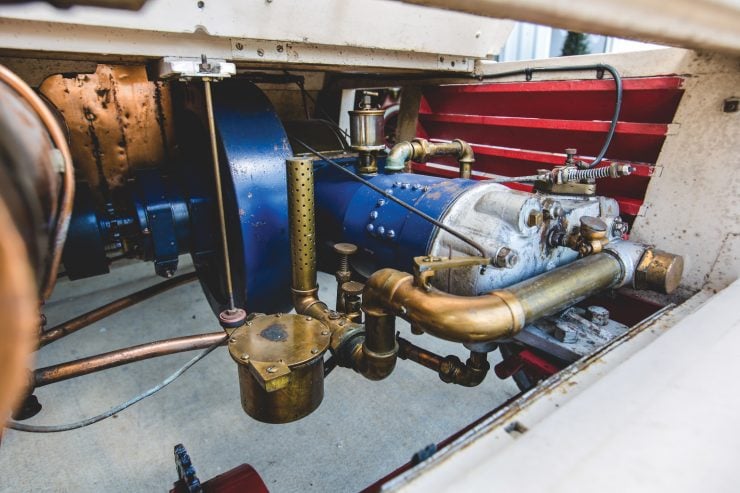 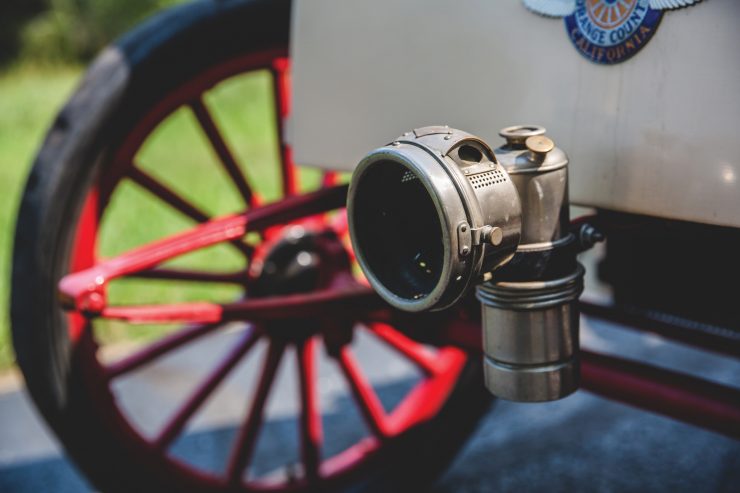 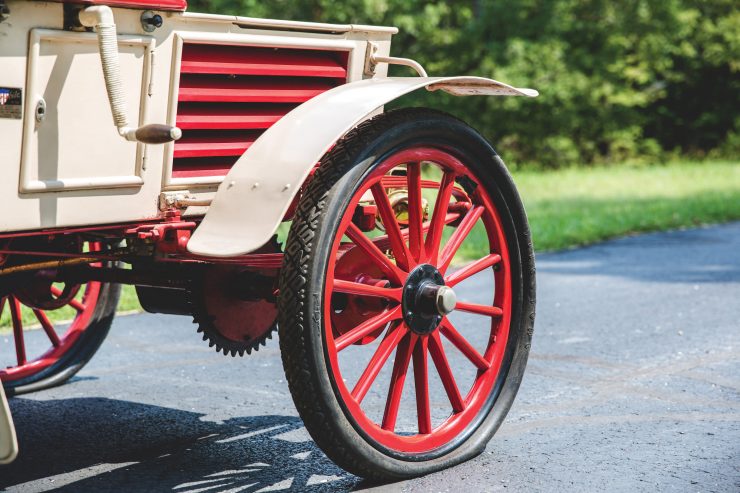 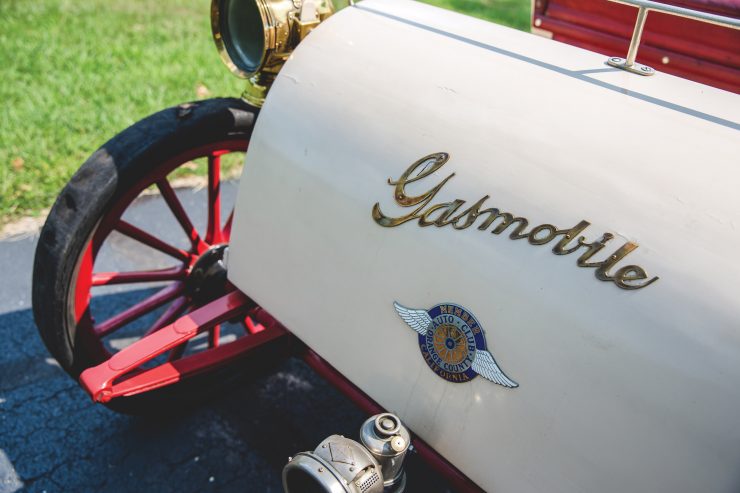 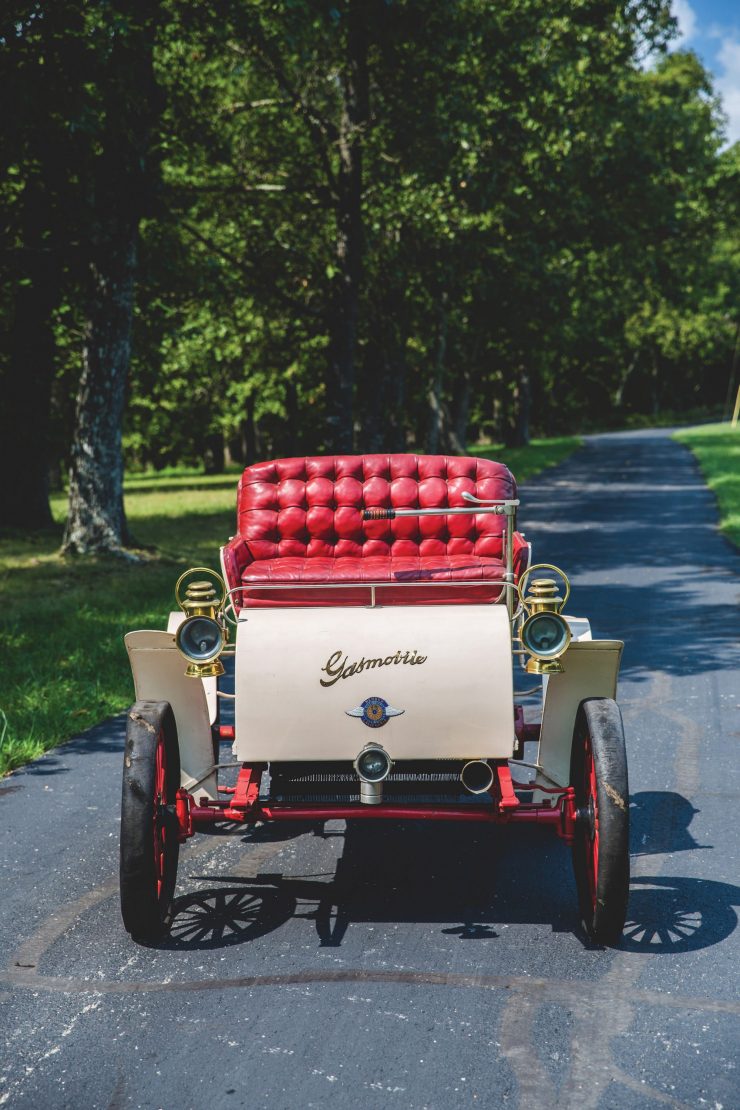 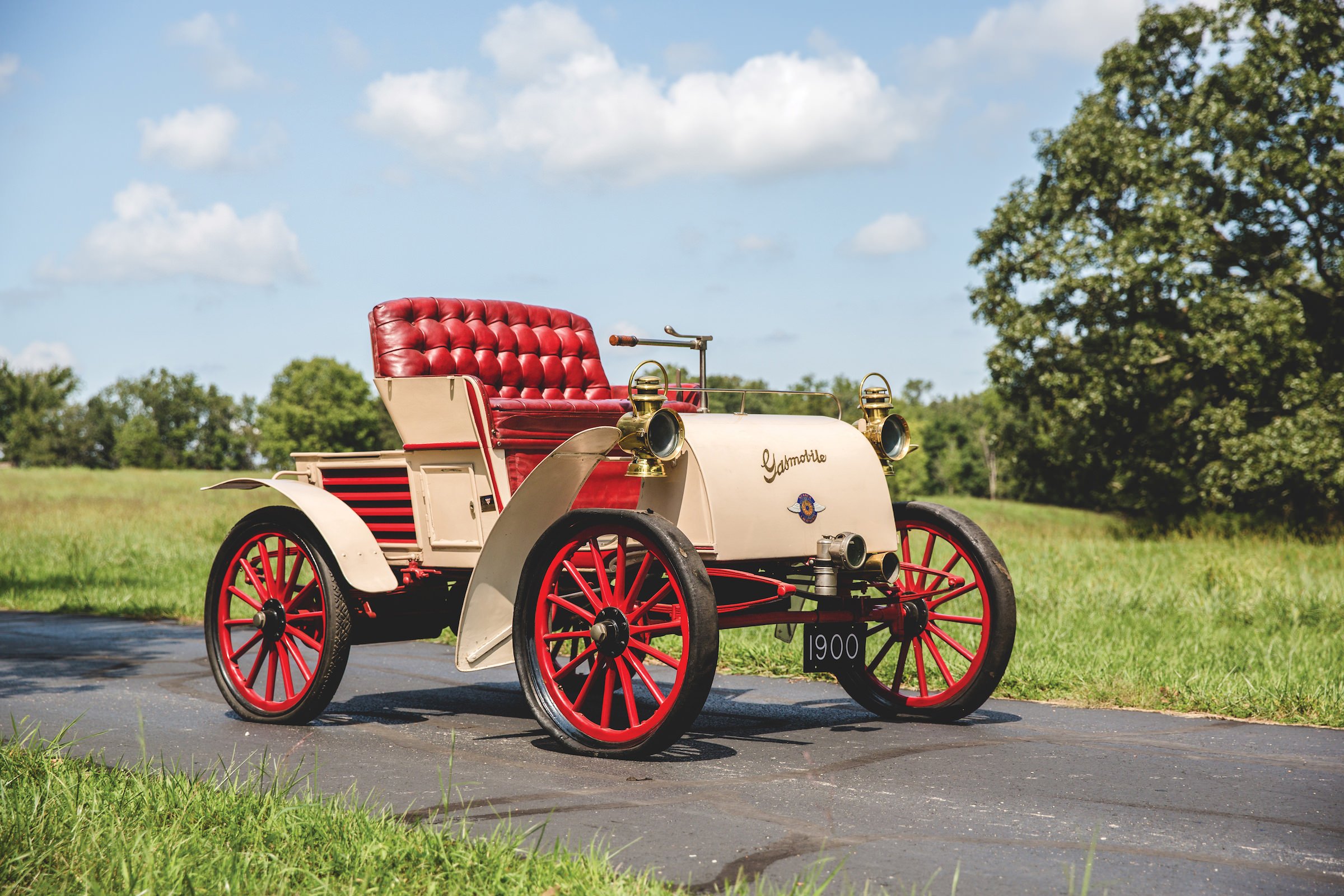