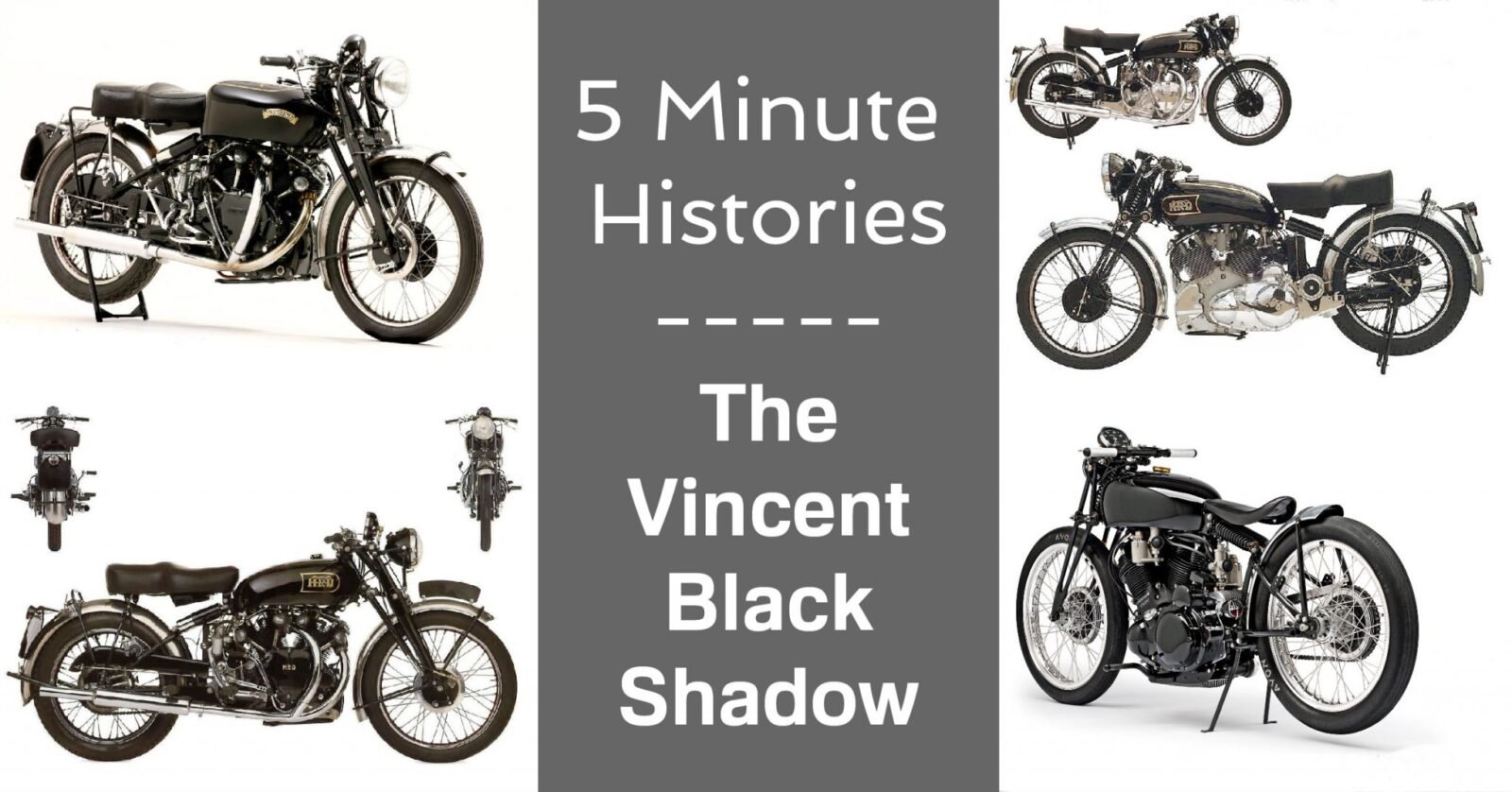 The Vincent Black Shadow – An Introduction

If the Brough Superior was the Rolls-Royce of motorcycles, then the Vincent Black Shadow was the Aston Martin. When Vincent began back in 1928 they started out the way they meant to keep going as “the makers of the world’s fastest motorcycles”. In fact the pièce de résistance Vincent, the Vincent Black Shadow, is commonly described as the world’s first superbike and there are few who would disagree.

Phil Vincent entered the motorcycle manufacturing business in 1928 and because he had been advised to trade under an established name with a trusted public profile he purchased the rights and tooling to the HRD name and began manufacturing motorcycles he called Vincent HRD.

The motorcycles Phil Vincent designed featured a cantilever rear suspension of his own design and patent. The bikes used proprietary J.A.P. engines as did many British motorcycles of the period. Things could have continued without a lot of change but in 1934 Vincent entered three bikes in the prestigious Isle of Man TT and all three suffered engine failures. By this time an Australian engineer named Phil Irving had joined Vincent and so the two Phils got their heads together and decided to create their own engine. Phil Irving got out his sharp pencil and paper and the single cylinder 500cc engine that would be the parent of the Vincent Black Shadow’s V-twin was born. 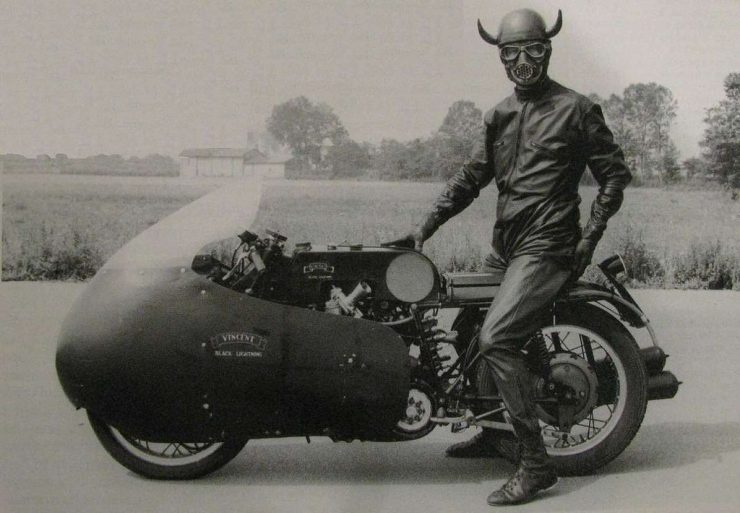 The new engine that emerged from that team effort was advanced for its day. It was an Over Head Valve (OHV) engine with double valve guides and forked rocker arm mounted on a shoulder between the guides for each valve. This more complex design was created to remove side forces on the valve stems to ensure that potential source of valve failure was eliminated. The two Phils had set about designing the best motorcycle racing engine they could. 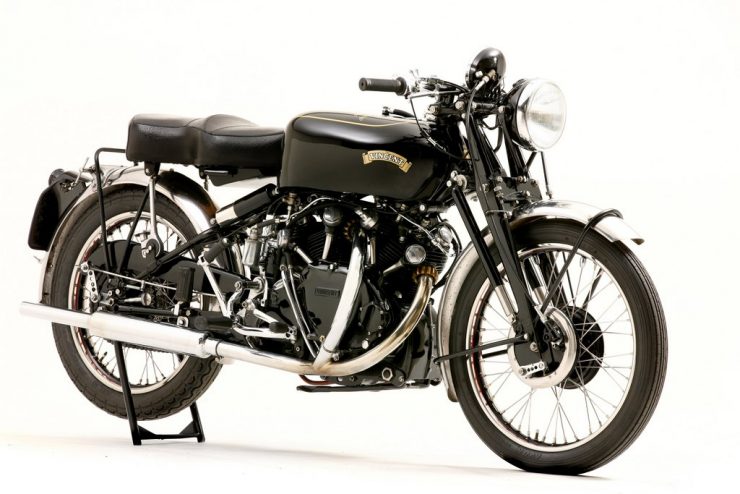 Factory test rider George Brown and George’s brother Cliff didn’t take long to do some development work of their own to try to improve on the design. George and Cliff did basic tuning modifications which included raising the compression ratio of the engine, enlarging the ports and fitting bigger carburettors to help the engine breathe fire just as efficiently as possible.

The results were impressive and the test bike with the improved engine was christened “Gunga Din” quoting the famous line from Rudyard Kipling’s 1892 poem which says “You’re a better man than I am Gunga Din”. This engine was still a single cylinder 500cc unit but what was to come next was something like the apple falling on Sir Isaac Newton’s head which caused him to discover gravity.

Legend has it that one day Phil Irving was looking at drawings for the single cylinder 500cc engine he and Phil Vincent had designed and he happened to put one drawing on top of another. The Newtonian “apple” fell on his head and he realised that he could easily create a V-twin version of that engine which would double its capacity to almost a full litre. Out came the sharp pencil and paper and the Vincent V-twin was born.

The year was 1936 and the first of the V-twin Vincents was called the Rapide. In its first iteration the bike was basically a slightly stretched version of the single-cylinder Meteor that had been the home of the single cylinder engine. The big new V-twin was dropped into that modified frame straight onto the same Burman clutch and gearbox.

The oil piping of the engine was external which made it look complex and sophisticated but which soon led to it being nicknamed “the plumber’s nightmare”. The Burman transmission proved not to be up to the task of coping with a doubling of the engine size and power so some work with the pencils and spanners was needed to create an improved Series B Rapide which appeared in 1946, the delay in getting the improved version into production having been caused by a person known as Adolf Hitler. 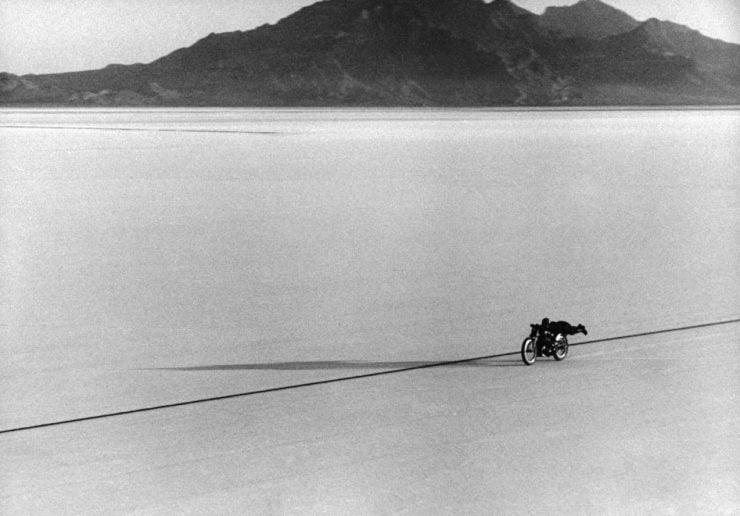 In post-World War II Britain the government was keen on industry being focussed on exporting goods and Vincent were one of those companies who were under pressure to export, especially to the United States. This led to Vincent finally dropping the HRD out of the company name because they did not want there to be any confusion with the HD of Harley-Davidson. By 1948, Vincents were being exported to the United States and were being sold under the Indian brand name along with other British bikes such as Norton, AJS and Royal Enfield.

The new owners of Indian Motorcycles wanted to keep their traditional big motorcycle models going and decided that the Vincent V-twin engine would be a great power plant to put into an Indian Chief.

An Indian Chief was duly shipped to Vincent’s Stevenage factory in Britain and the 998cc Vincent V-twin was shoehorned in. It was a nice idea but the writing was already on the wall for Indian and the Indian Chief with the Vincent engine (called the “Vindian”) was not put into production. With not only the home market but also the US market firmly in their sights Vincent set about creating the motorcycle that would make the company a household name. In 1948, the same year as the Vindian experiment, Vincent set about creating an improved version of their V-twin Rapide.

The engine was the same 998cc V-twin but in an improved state of tune producing 55bhp and built as an integral unit with the gearbox (i.e. unitary construction). The oil piping was internal so the “plumber’s nightmare” was also gone. The V-twin engine and gearbox unit was suspended by the frame as a stressed member integral with it.

Phil Vincent and Phil Irving were convinced that the then telescopic front forks allowed bending and so they kept on with their girder front forks but with hydraulic damping and called these “Girdraulic” forks. The cantilever rear suspension was already state of the art and it would take the Japanese and other bike makers decades before they caught up. The engine and gearbox unit was coated in black Pylumin and the frame and fuel tank were painted black. With the black engine and the black gearbox fitted into the black frame with the black fuel tank the bike was named the Black Shadow.

Like all Vincent motorcycles it was completely hand built and it was without doubt the epitome of motorcycle design and engineering. It was a motorcycle that created a whole new standard for motorcycle design and construction. Vincent had created the world’s first “superbike”, although that moniker wouldn’t be coined for another decade or so. As if the Black Shadow was not enough, Vincent also went ahead and created a racing version which they called the Black Lightning. For the Black Lightning everything that could be made of aluminium was, and anything not needed for racing was not fitted.

The end result was a lightweight motorcycle with an excellent frame and suspension powered by that potent 998cc V-twin engine designed and engineered for racing. Vincent were still determined to make “the fastest motorcycles in the world”. In 1948, the year the Black Shadow entered production, Chicagoan Roland Free borrowed California sportsman John Edgar’s Vincent. No-one is sure whether it was a Black Shadow or a Black Lightning but Rollie Free was determined to strip everything off the bike and himself that he didn’t need to make an attempt on the motorcycle land speed record.

Rollie rode the bike wearing nothing but his appropriately named Speedo bathers, a bathing cap and a pair of borrowed sneakers, stretched out prone on the top of the bike like an Olympic swimmer diving into the pool. He got the Vincent up to 150.313mph and not only made his way into the record books setting an American Motorcycle Land Speed Record but also into the history books with the iconic photograph of “The bathing suit bike”. The bike had been factory modified and the engine produced 25bhp more than the standard Vincent Black Shadow, whilst the weight of the bike had been reduced by 100lb. 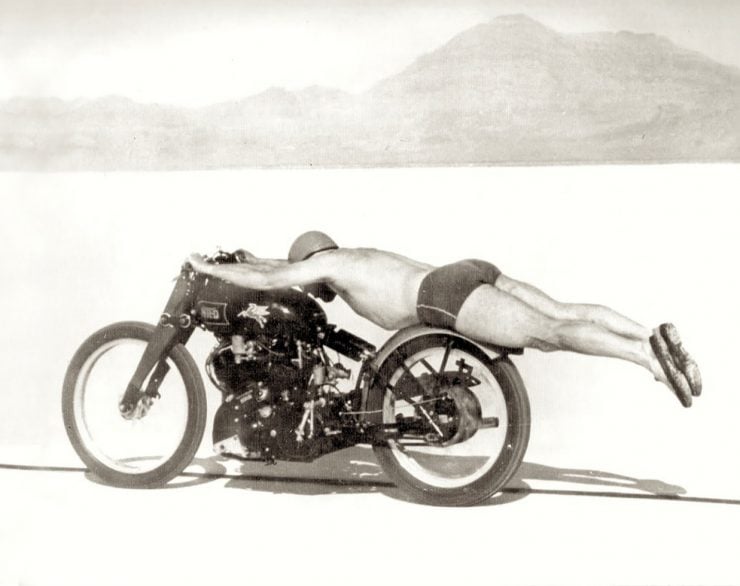 The End of the Road For Vincent

The standard Black Shadow was capable of 125mph and the bike came with a nice big speedometer that went all the way up to 150mph in case the owner felt like stripping everything off their bike and themselves to try to emulate Rollie Free’s effort. Vincent closed for business in 1959. Less than 1700 Black Shadows were made and so the survivors are very much collector’s items, yet many if not most people who buy them or restore them ride them and enjoy them.

About the only person who may not have enjoyed his ride on a Vincent Black Shadow as much as he should was Top Gear presenter Richard Hammond in the episode “Race to the North”. It seemed to rain heavily for most of his ride from London to Edinburgh whilst James May languished in the opulent and dry comfort of a Jaguar XK120 and Jeremy Clarkson shovelled coal into the Tornado steam locomotive. He made it to the bar of the Balmoral Hotel in Edinburgh in a somewhat soggy and enthusiasm dampened condition. 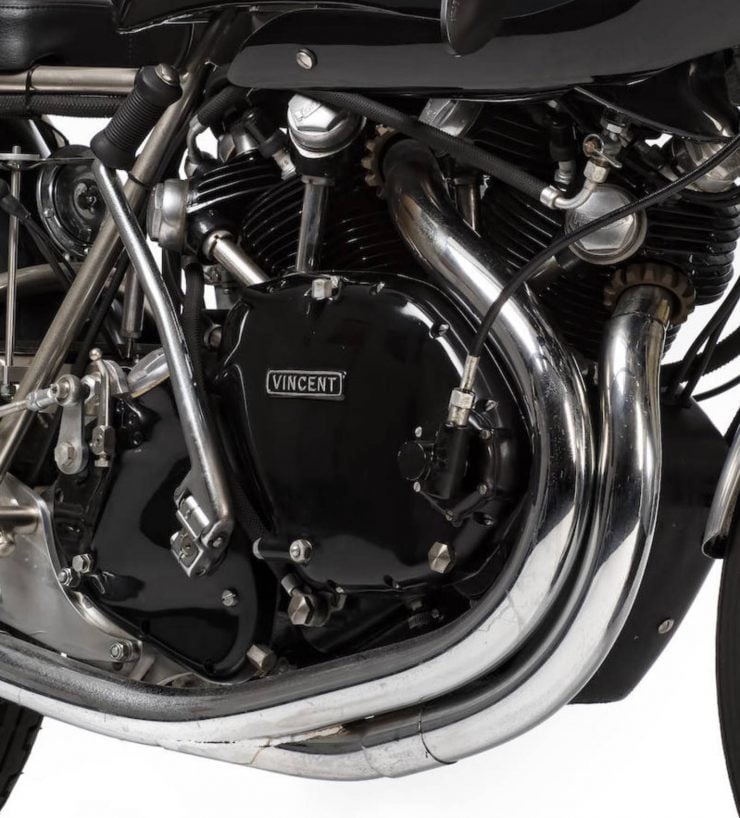 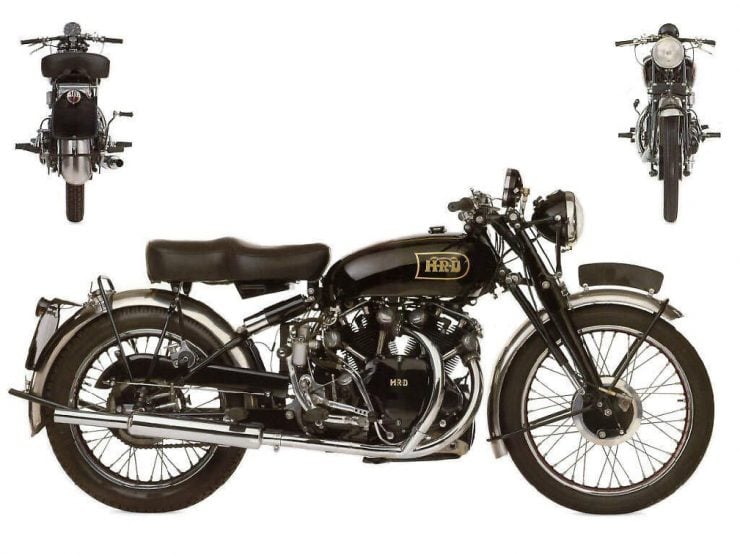 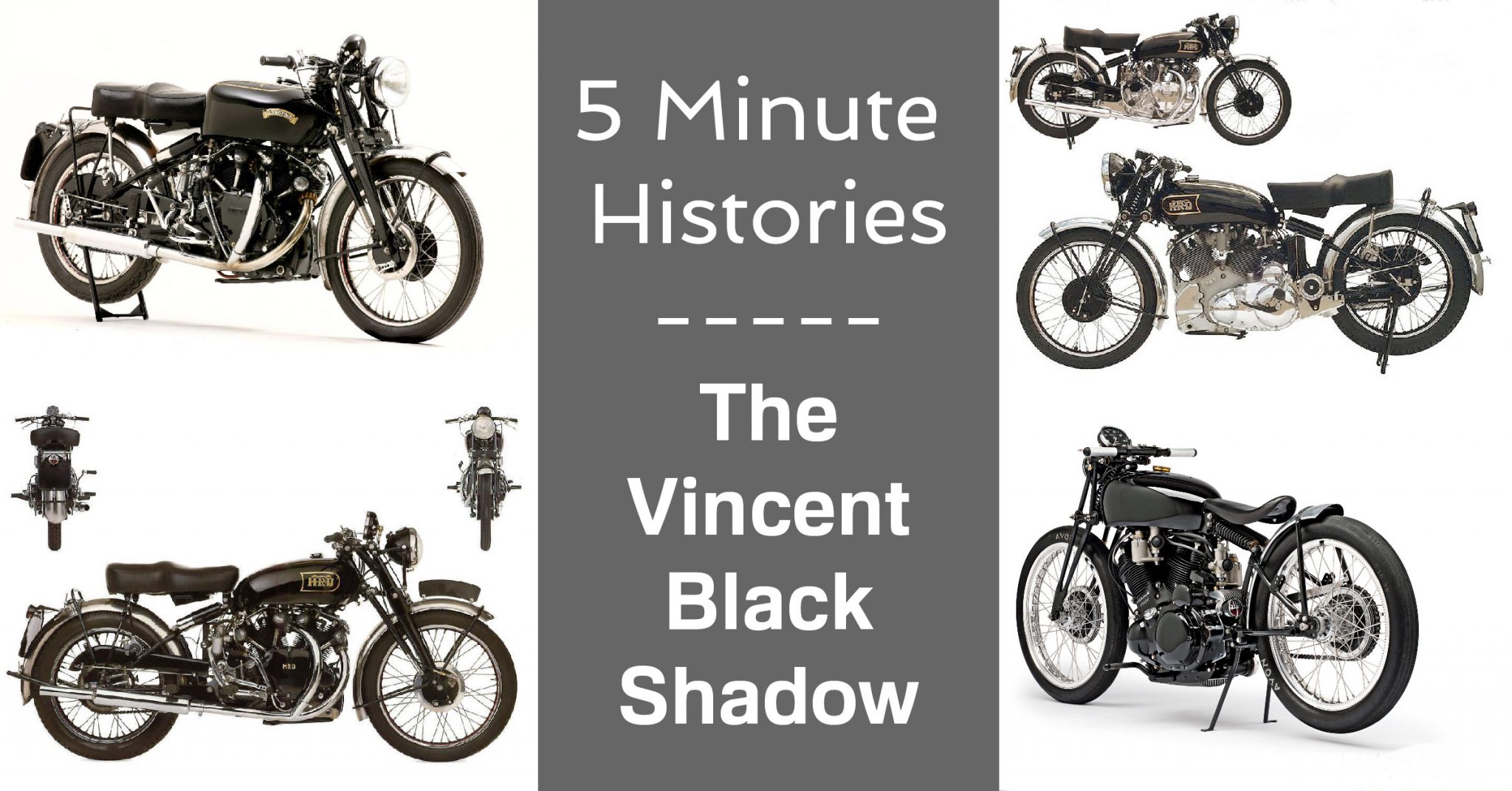