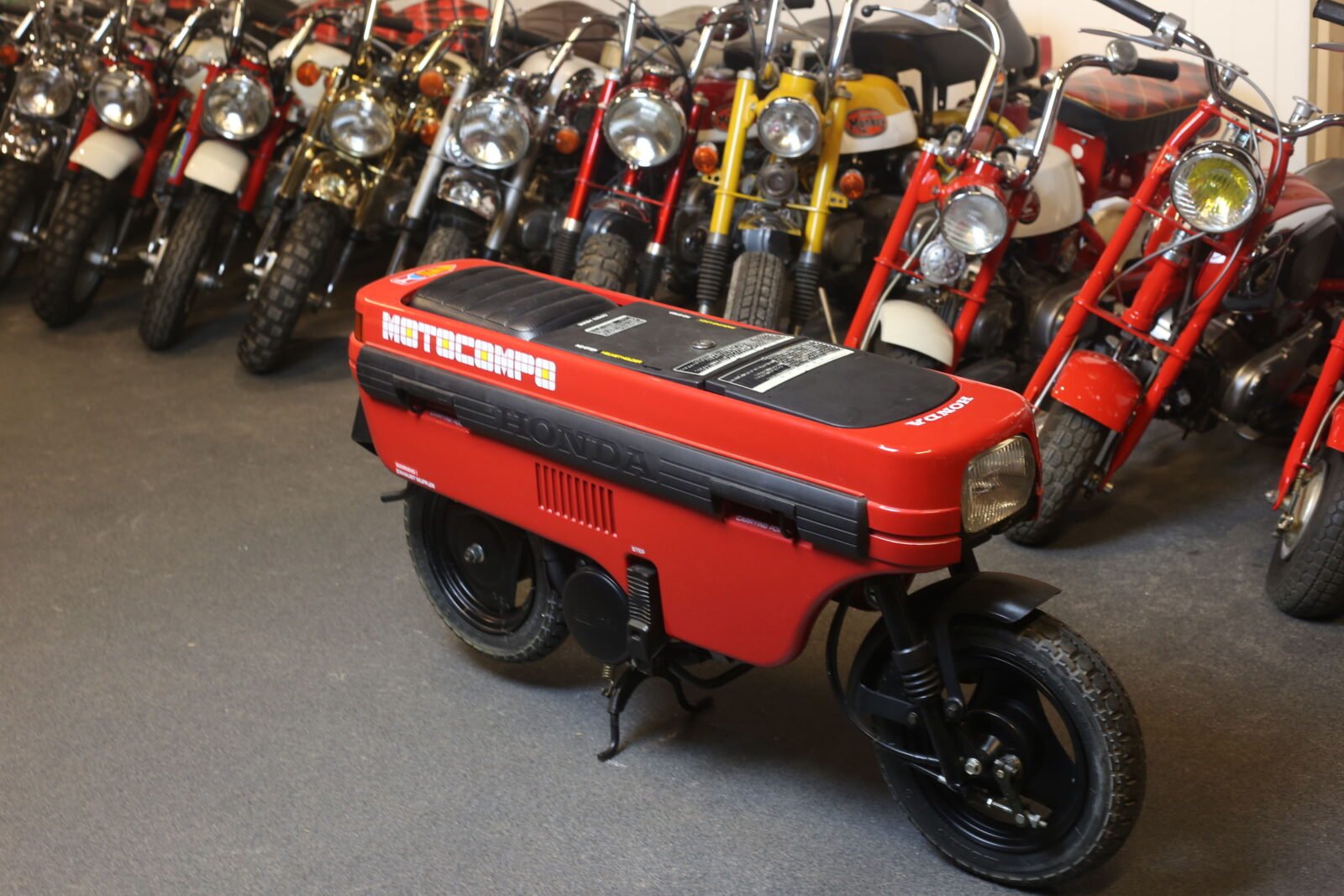 Honda built the Motocompo between 1981 and 1983, they had initially estimated they they would sell approximately 10,000 of them each month, but by the time production ceased they had sold just over 50,000. On paper the Motocompo was a failure, but all wasn’t lost.

The little scooter became a cult classic and is now in high demand with enthusiasts with top notch examples selling for $10,000 USD apiece.

The concept of a foldable scooter wasn’t a new thing when the Motocompo was introduced, they had already existed for decades, perhaps most the most famous was the British Welbike from WWII – a version of which was sold in the USA as the Indian Papoose. The Welbike was designed to be folded down and air dropped by parachute, soldiers would then have motorized transportation on the ground.

The Motocompo was designed to fulfill an entirely different niche. Japan in the 1980s was already dealing with significant issues relating to traffic in many of their major metropolitan areas. Honda developed the small folding scooter to be used for the final part of a commute – the car would be parked on the city limits and it would be the small folding scooter than would take the commuter to the office and then back to the car at the end of the day.

Honda engineers knew the bike had to be as light as possible, so they developed it around the small 49cc single-cylinder, two-stroke engine used in a number of other Honda scooters. For the sake of simplicity the Motocompo has a single speed transmission with an automatic clutch, and it produces 2.5 hp at 5,000 rpm with 2.75 ft lbs of torque at 4,500 rpm.

The top sustained speed is just 30 km/h (18.6 mph), though bursts of speed higher than this are possible, depending on rider weight.

In order to use the Motocompo you need to open the top and fold out the handbags, the seat is then popped up and the foot pegs are folded out.

There’s no electric starter to help save weight, so it’s kickstart only. The bike features all the legally required lights including headlight, indicators, and brake light. Braking is accomplished with front and rear drums, and there’s also (somewhat limited) front and rear suspension also. 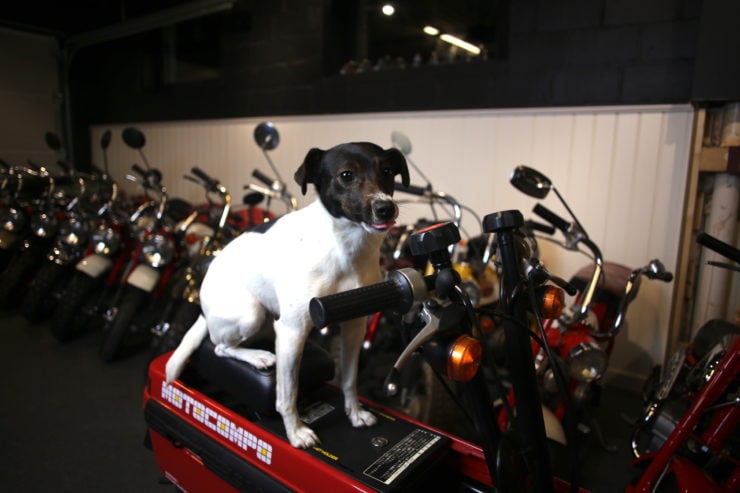 Above Image: Floki, resident mascot at TVP Classics, helps to model the Motocompo.

The total weight of the Motocompo is 45 kgs (99 lbs) wet, although this isn’t heavy by typical motorcooter standards it is still a lot of weight for the average commuter to be lifting into and out of their trunk everyday – particularly after use when it’s hot.

This combined with the relatively low top speed contributed to the lower sales figures for the model. In many ways the Honda Motocompo was ahead of its time, and if they released an identical vehicle with an all-electric drivetrain today it would probably sell like hotcakes.

The red Motocompo you see here is a 1982 model, it’s in original unrestored condition and it’s currently being offered for sale by TVP Classics with a price of €7,500. Finding all-original examples of this model is getting harder and harder as they continue to be snapped up by collectors.

If you’d like to read more about this bike or enquire about buying it you can click here to visit the listing. 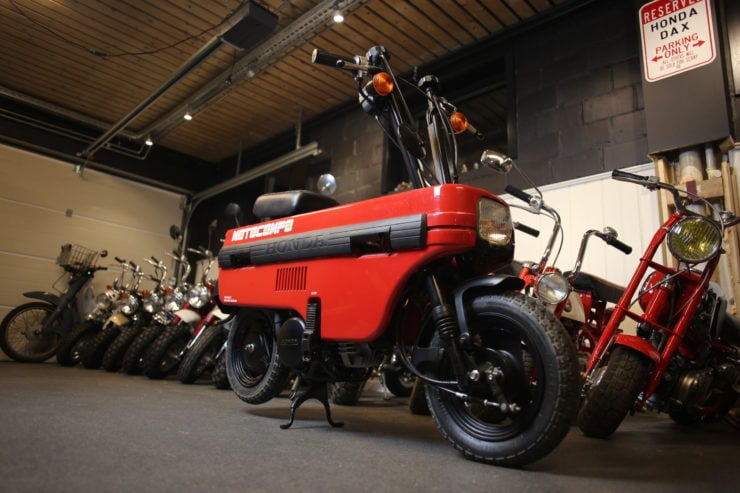 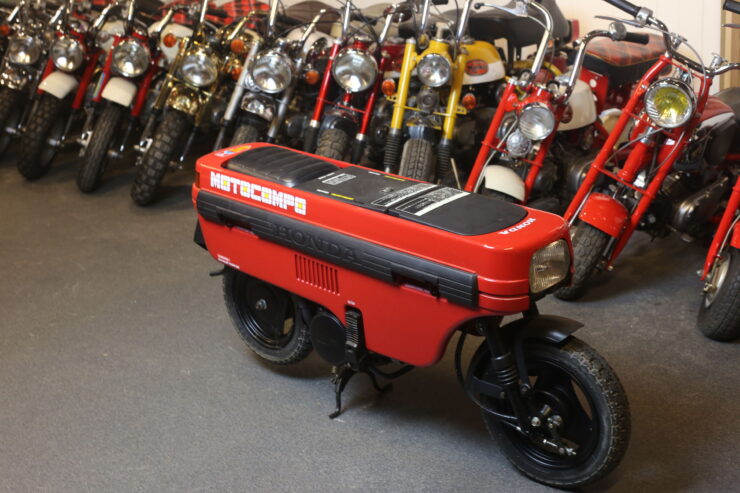 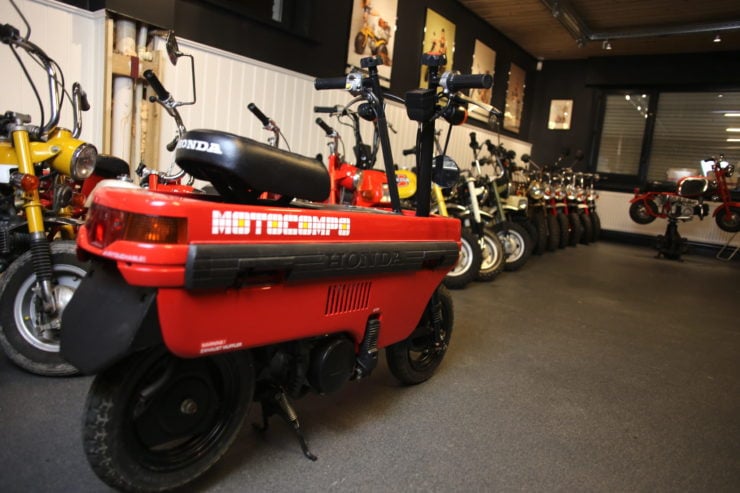 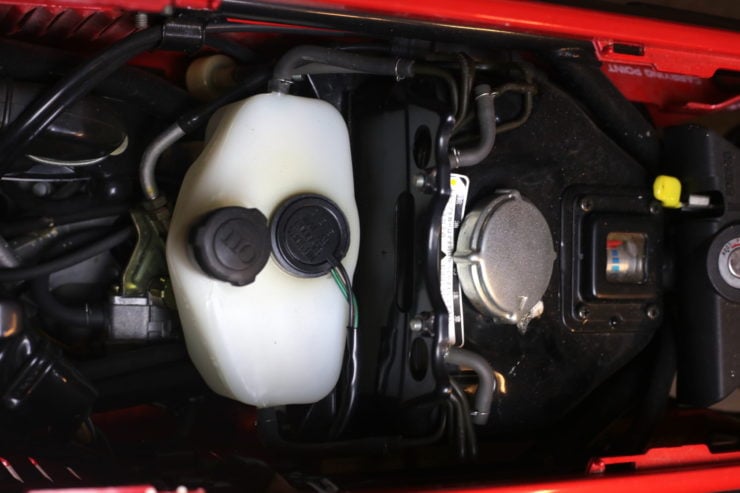 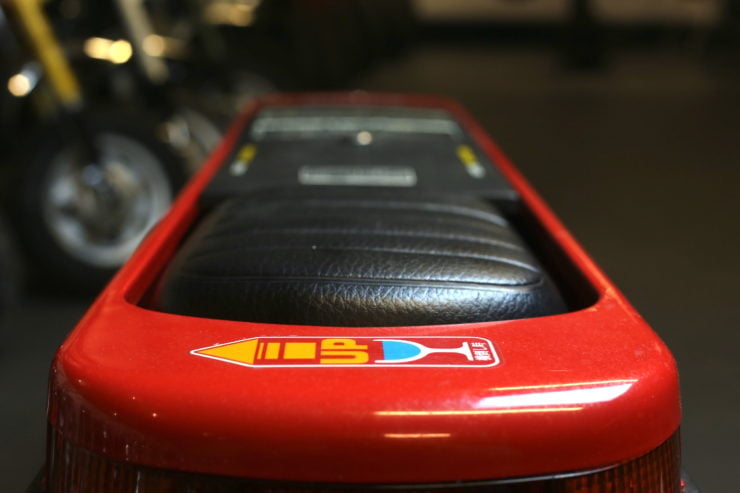 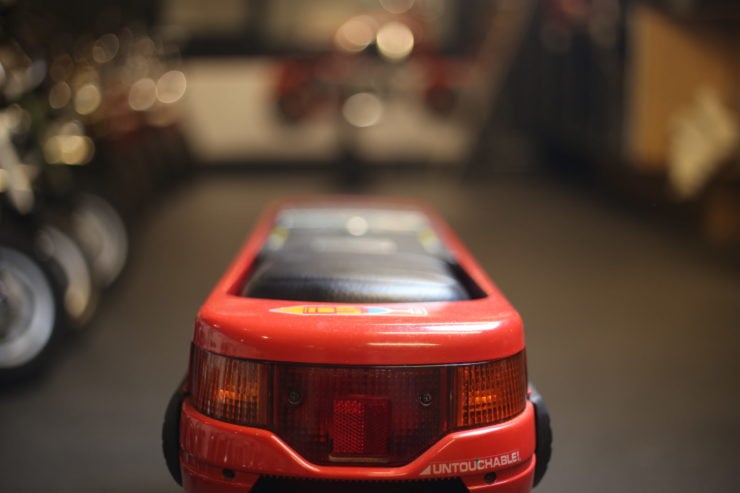 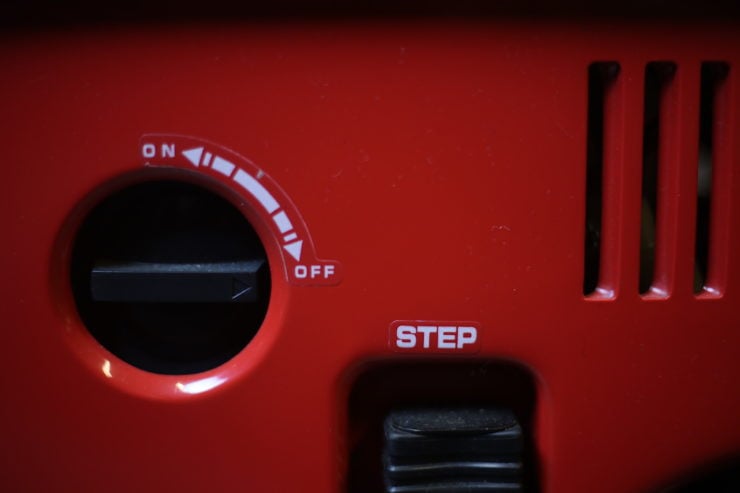 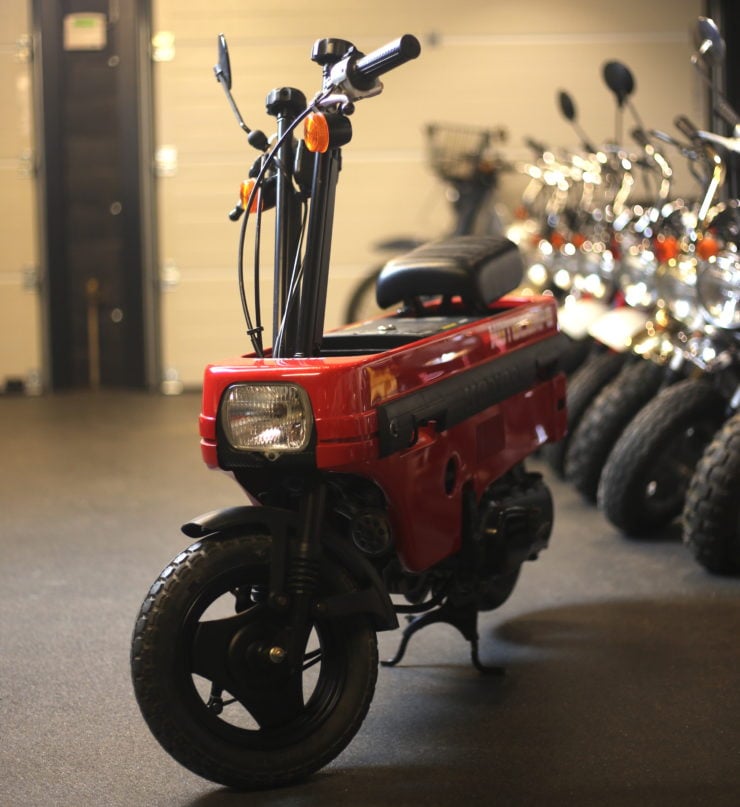 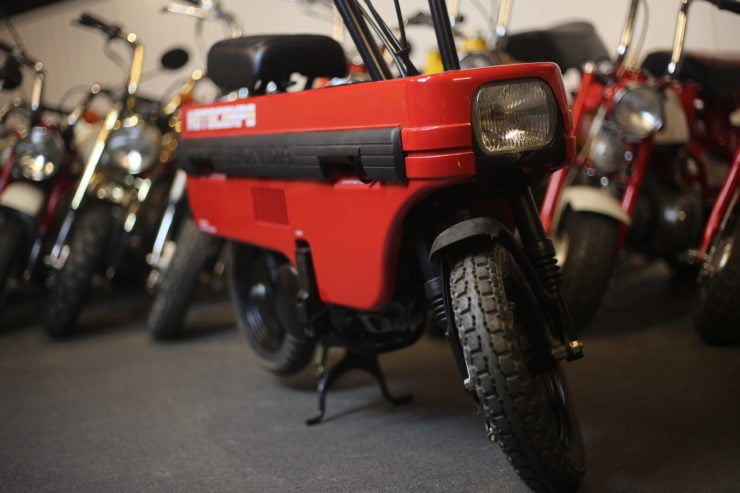 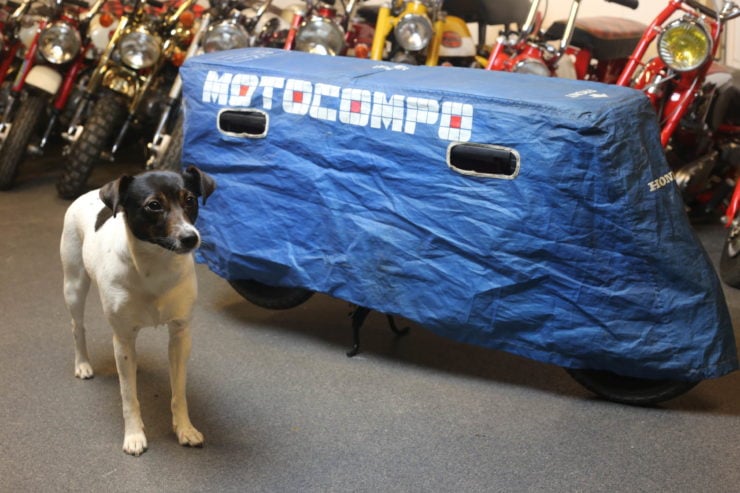 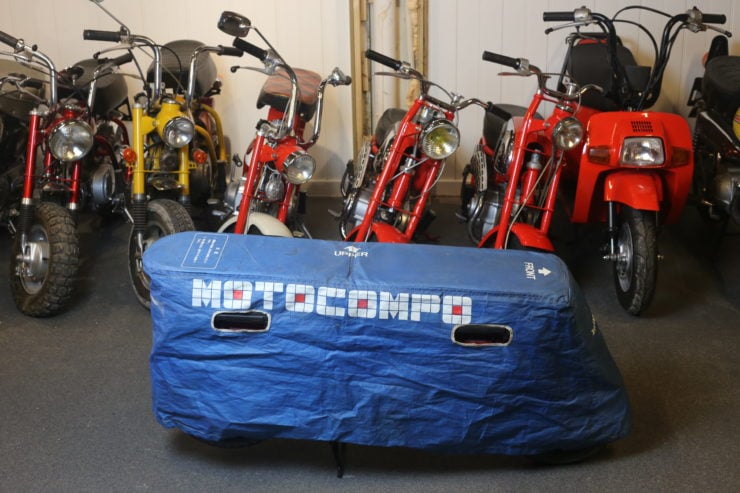 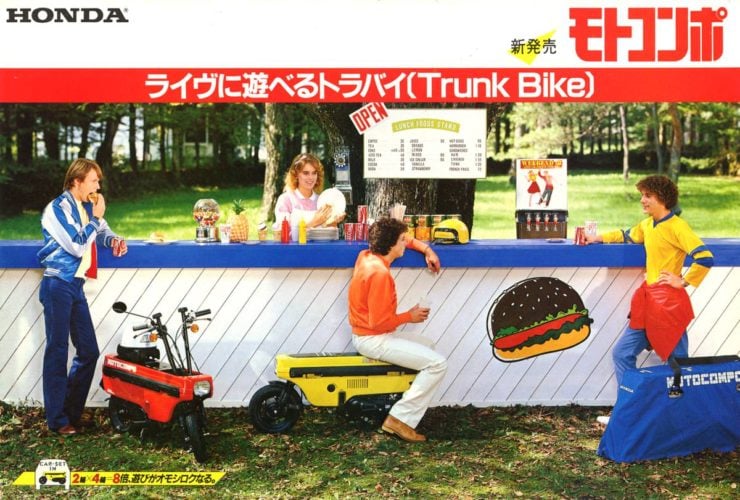 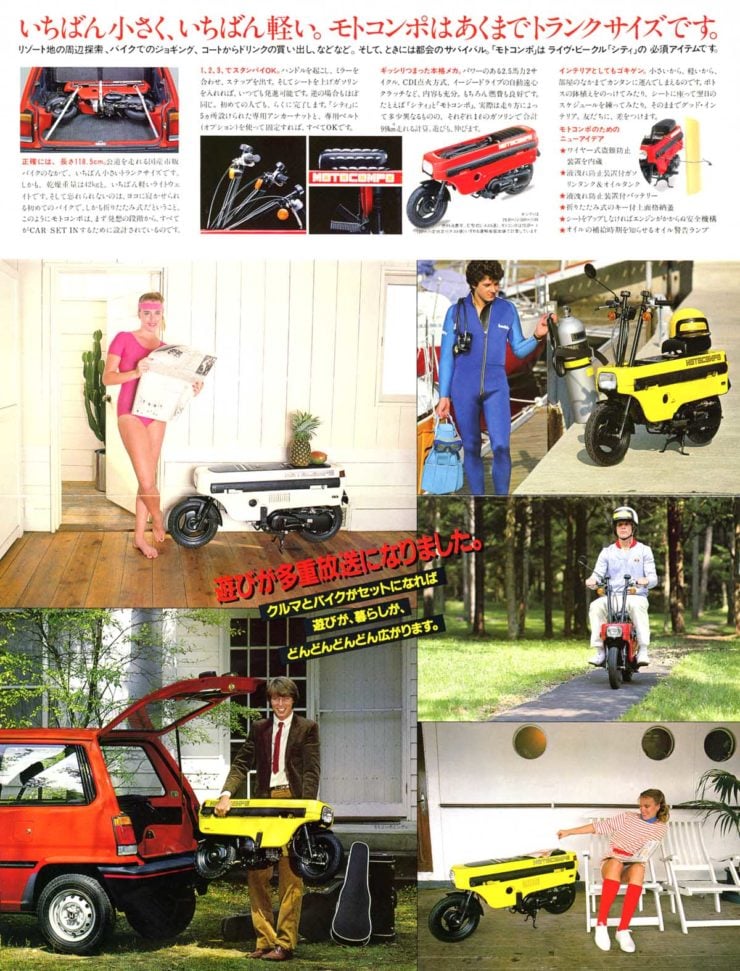 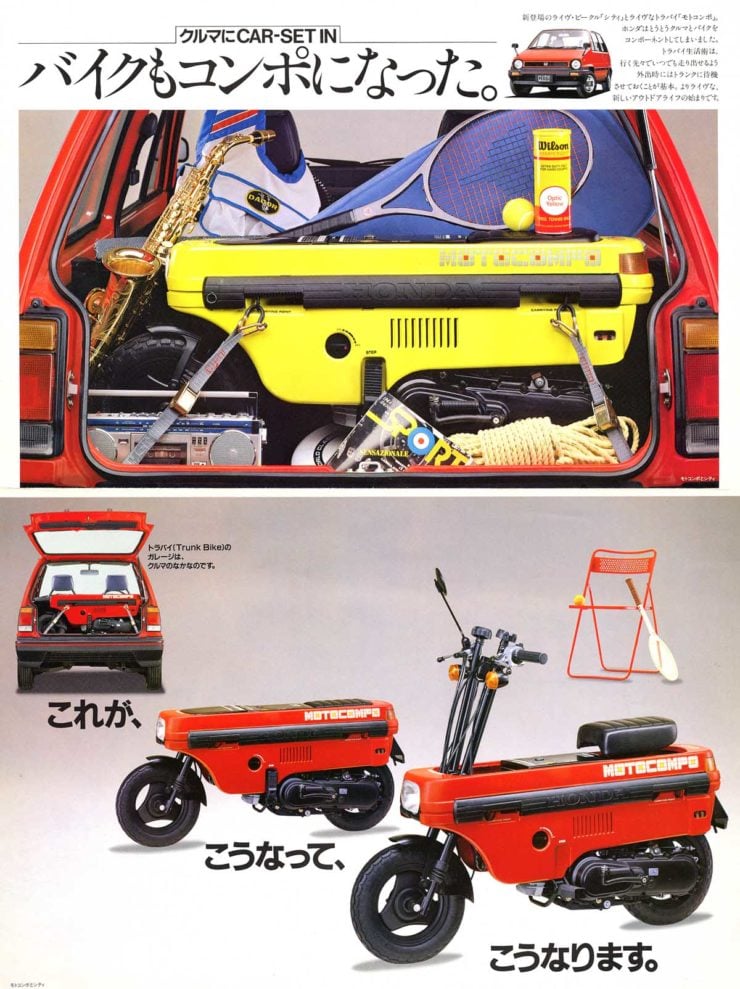 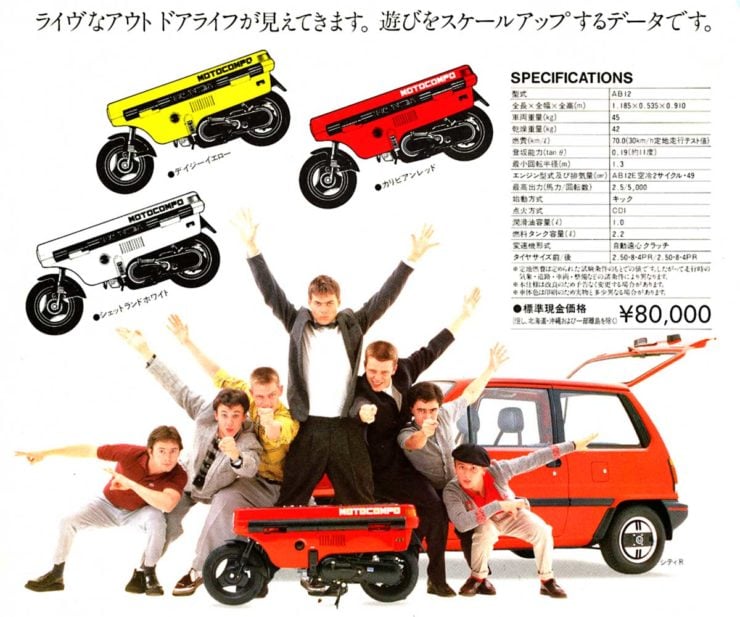 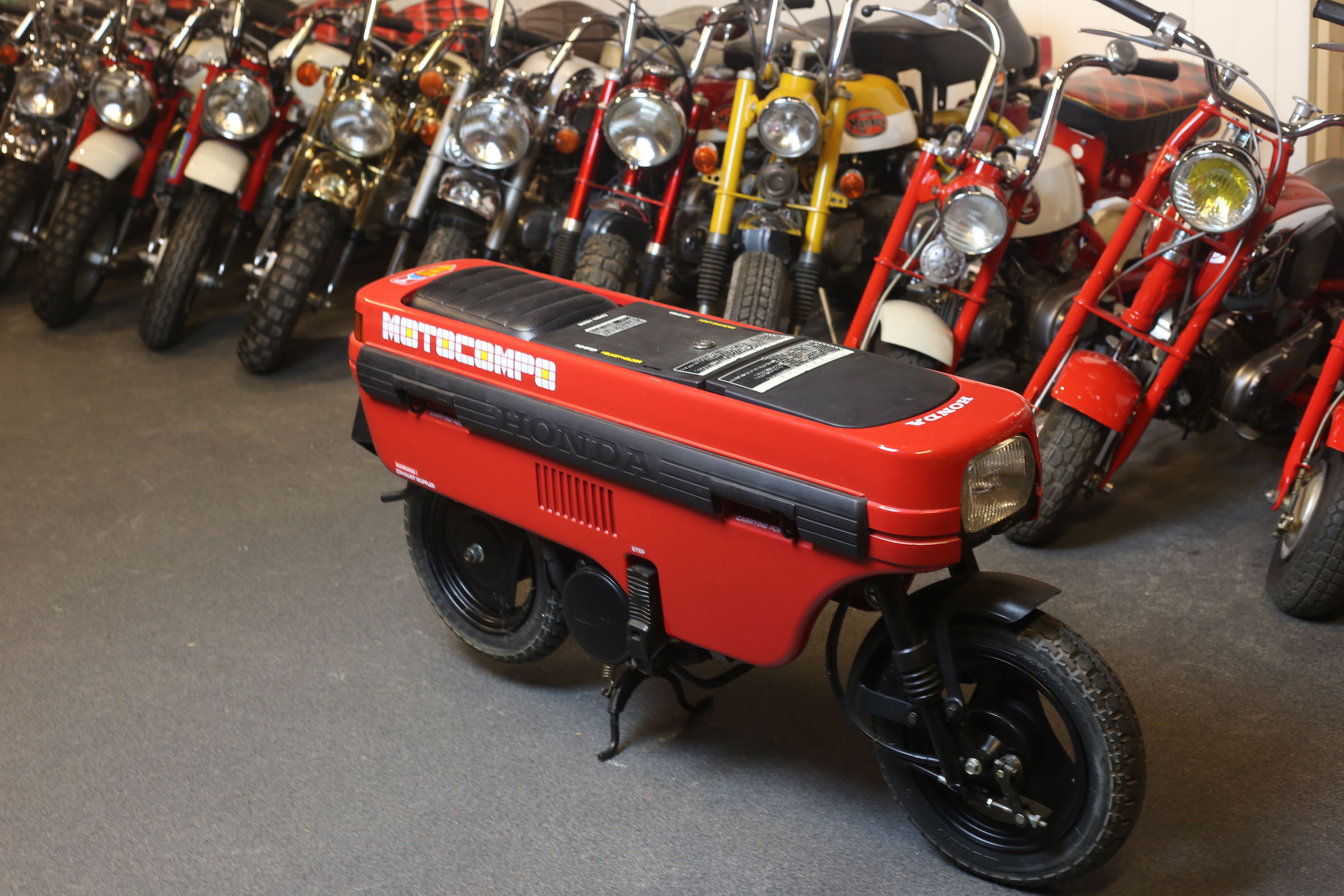