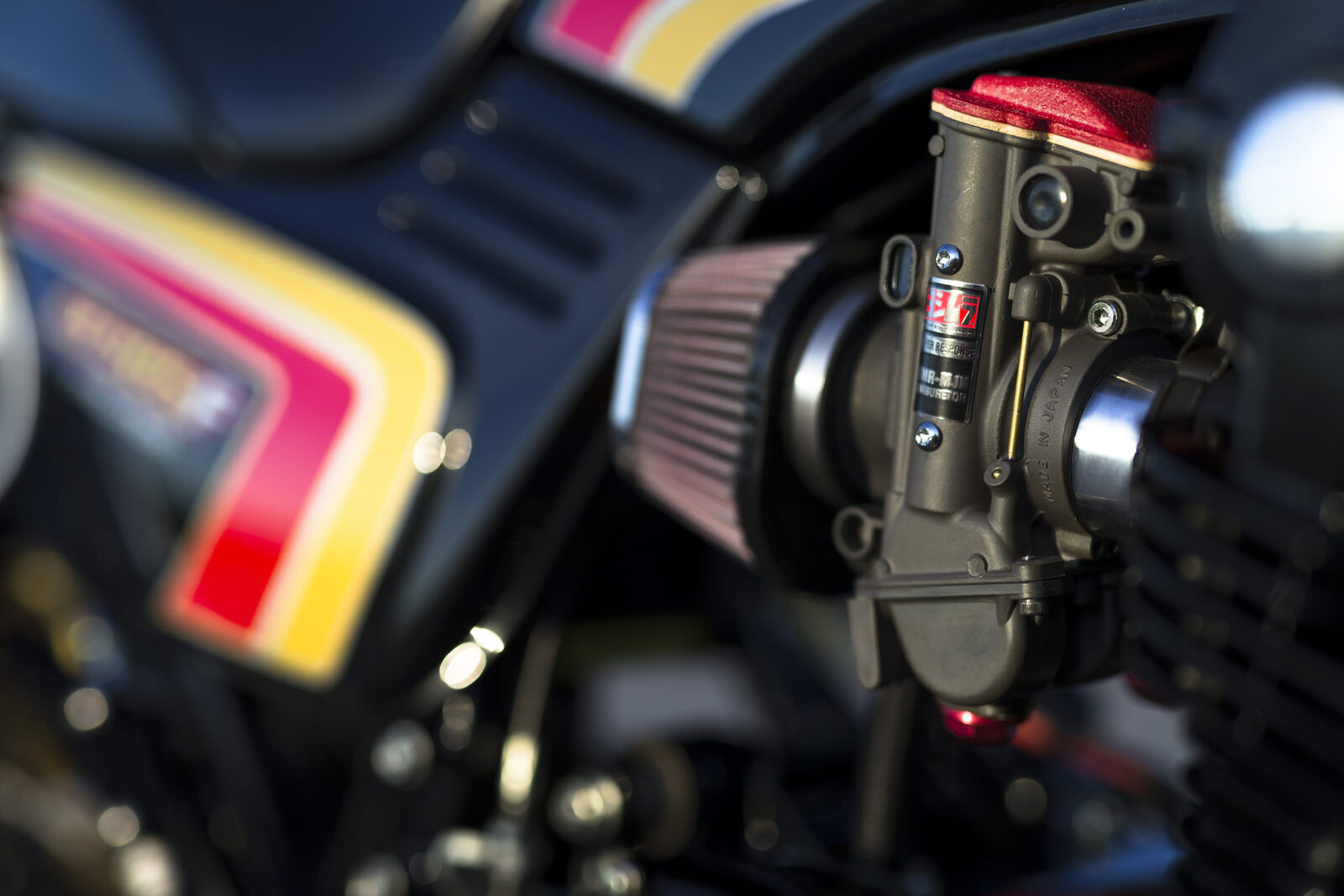 The Honda CB985F Evolution is a motorcycle that started life as a regular CB900F, before getting a comprehensive evolutionary rebuild at the hands of Darren Begg – a custom motorcycle builder who specializes in taking classics from the ’70s and ’80s, then rebuilding them using modern suspension, brakes, and technology.

dB Customs is based in Ottawa, Canada and run by Darren Begg. Darren is a friendly Welding Engineering Technologist and an experienced professional photographer, meaning he’s one of the few people out there who can build world class custom motorcycles and then photograph them himself for publication.

Earlier in his career Darren worked as an apprentice mechanic for a well known performance shop, often turning wrenches on their race winning drag racing cars, and learning a substantial amount about how to extract every available ounce of horsepower from four-stroke engines. 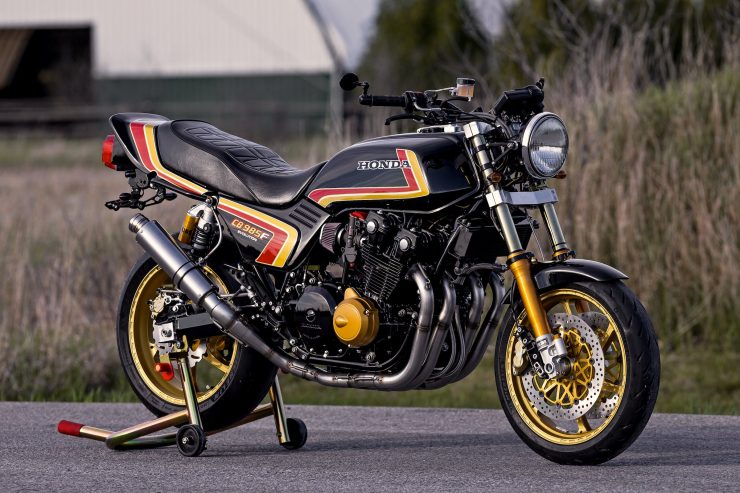 The custom you see here is a build very close to Darren’s heart, it’s a tribute to the first custom he built – a bike that would lead to him forming dB Customs and doing it full time.

The customer who ordered this bike was enamored with the original and wanted to use the same paint scheme – but Darren wanted to do far more than just build another identical bike. Instead he worked out a list of improvements he could make, that would result in the completed bike being not only faster, but better handling and better at braking too.

Once the donor bike was stripped down the rebuilding process could begin, the frame was modified to suit a GSXR600 SRAD swingarm, and new custom shock mounts were welded into place. The team at Zanzani in Italy created a new set of triple trees for the bike, allowing Darren to fit modern Öhlins forks, which were matched with Öhlins shock absorbers in the rear.

The wheels are lightweight Oz Racing Gass series units in a gold anodized finish, Brembo brakes were fitted front and back, paired with 320mm full floating rotors up front, an RCS master cylinder and levers, with braided lines from Spiegler. 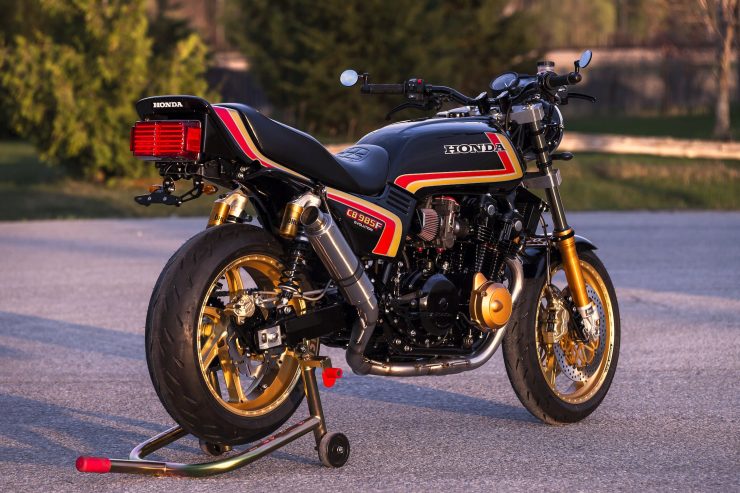 Perhaps the most important part of any performance custom is the engine – this one was rebuilt with a Wiseco 985cc forged piston kit, with a ported head, performance cams with Morse silent race cam chains, and 1100F rod bolts. The intake is delivered from a rack of four 36mm Yoshimura TMR-MJN carburetors, and it exits through a stainless steel 4-2-1 racing exhaust by JayGUI.

Once the engineering was done, the bike was sent off to Sketches Ink who painted it Nero Carbonio (base color) from a Maserati Grand Turismo. Impressively, the bike has no decals, everything is painted on by hand.

The completed CB985F weighs in at 82lbs lighter than the stock CB900F, tipping the scales at 443lbs with a weight distribution of 51% front and 49% rear. It turns out 105 hp at the rear wheel, and thanks to its new suspension and brakes, it handles better than the original by a notable margin. 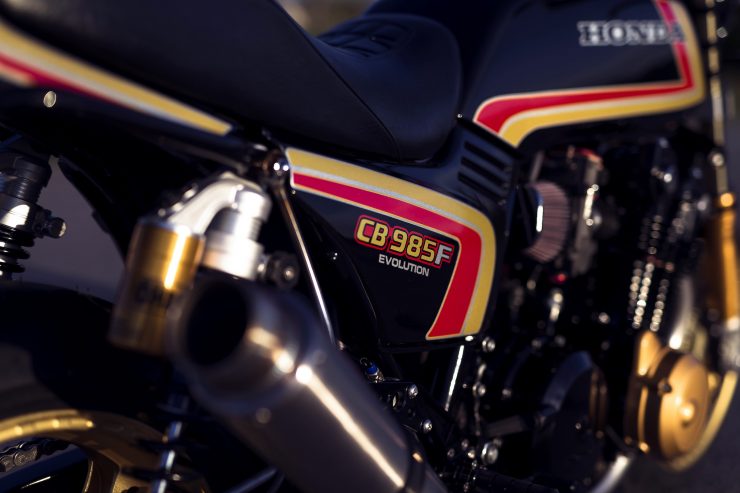 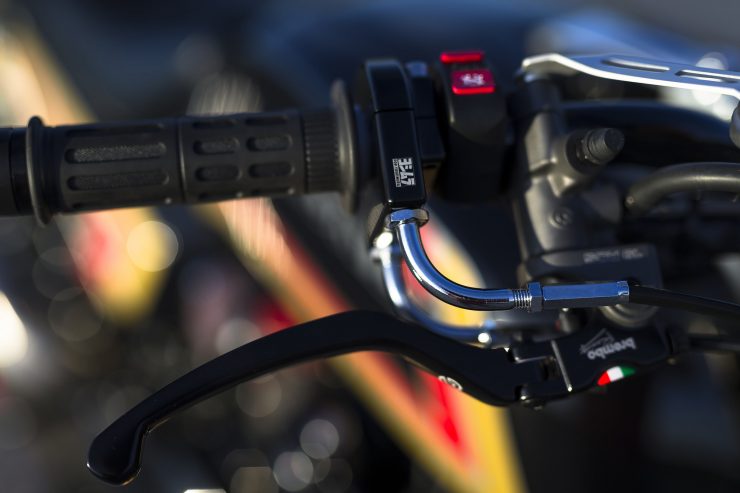 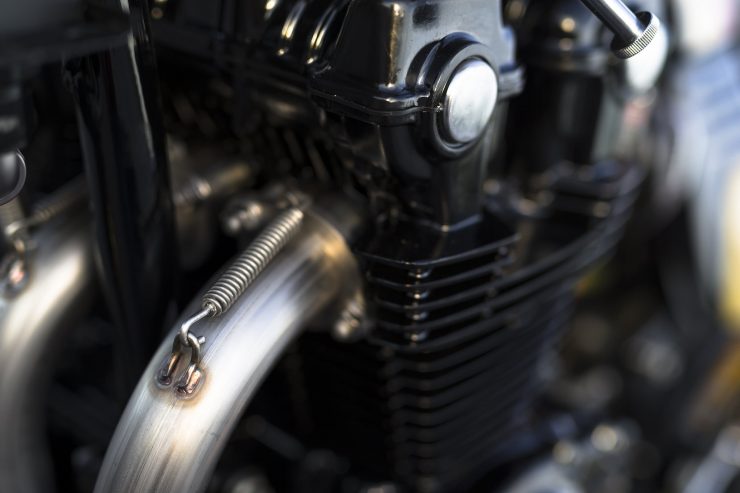 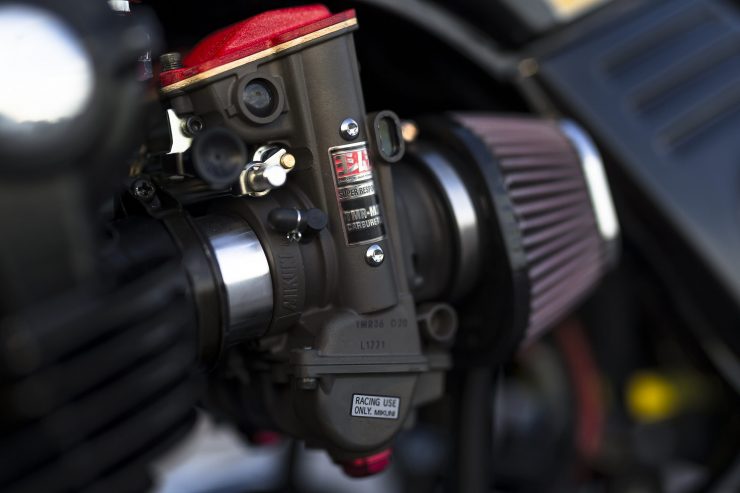 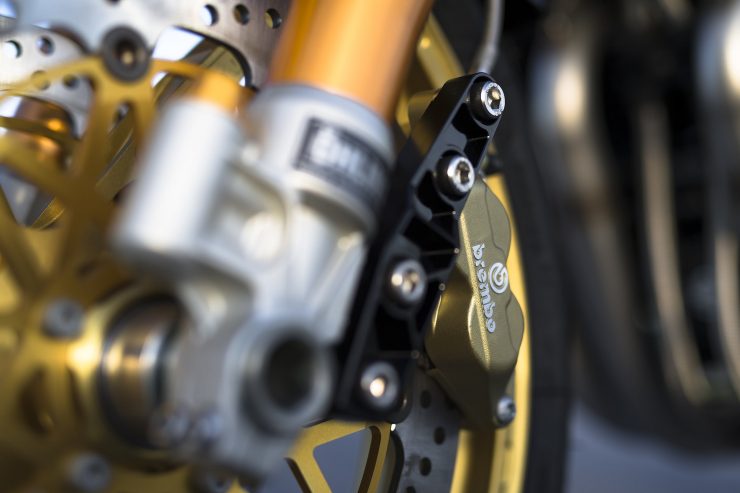 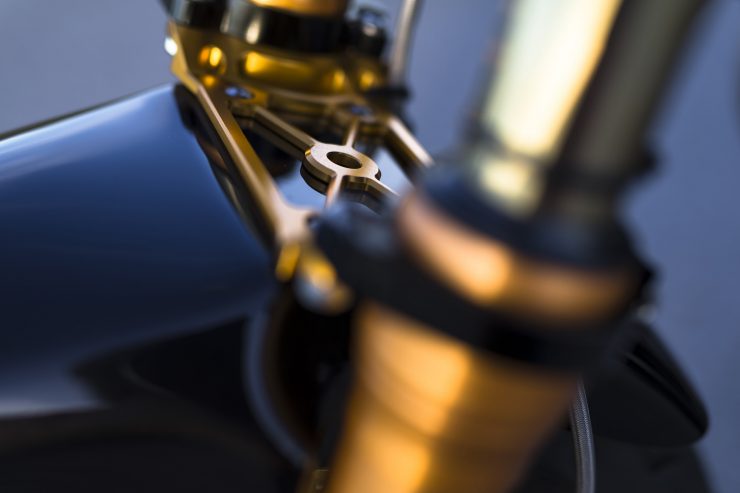 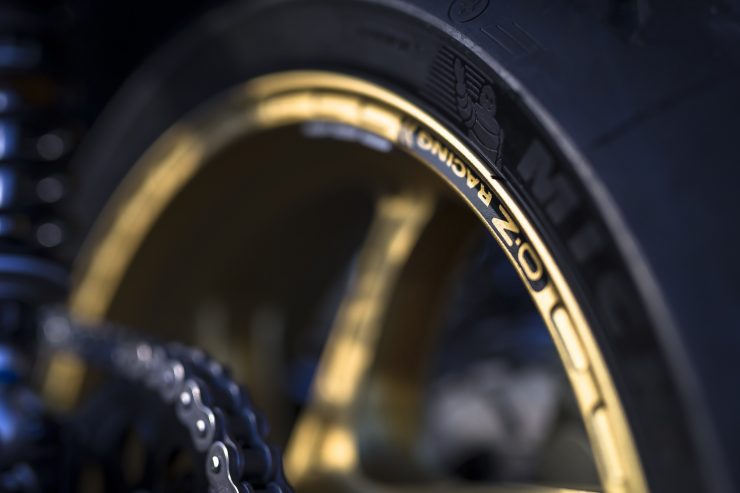 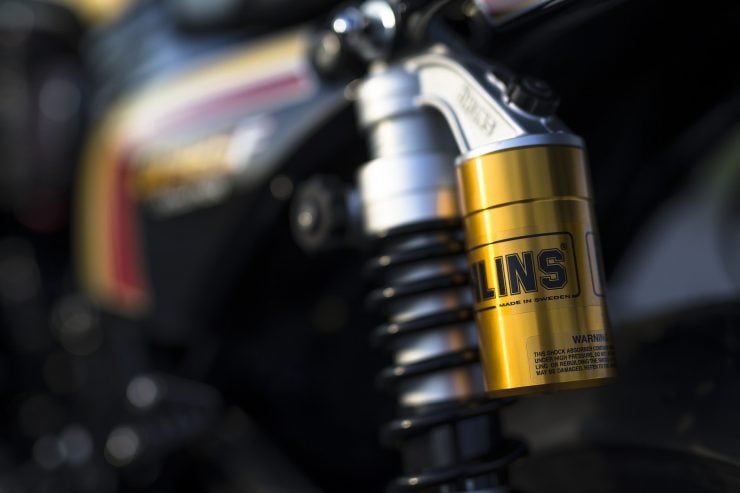 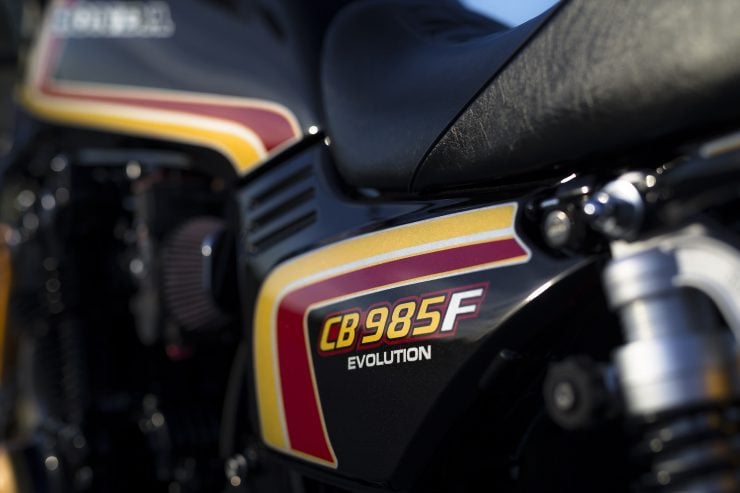 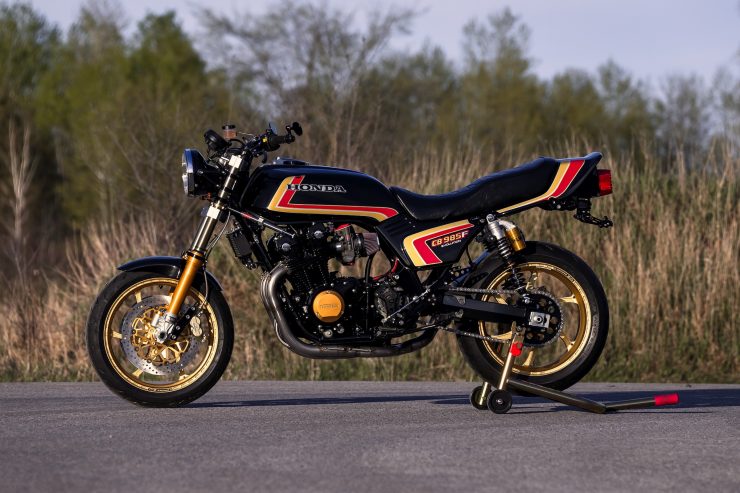 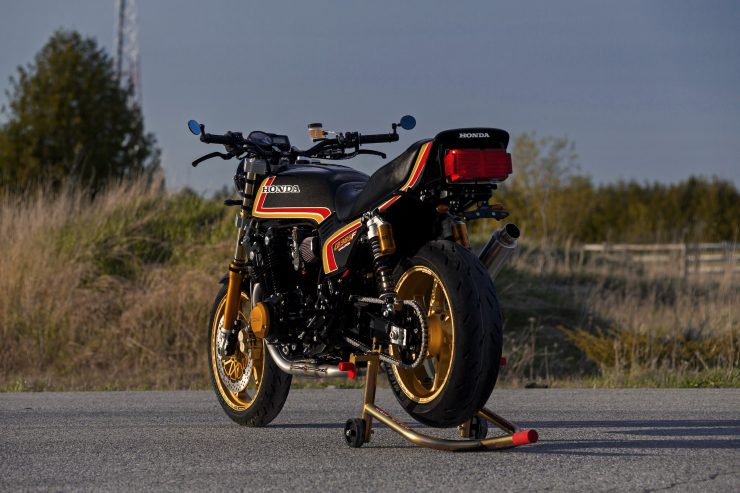 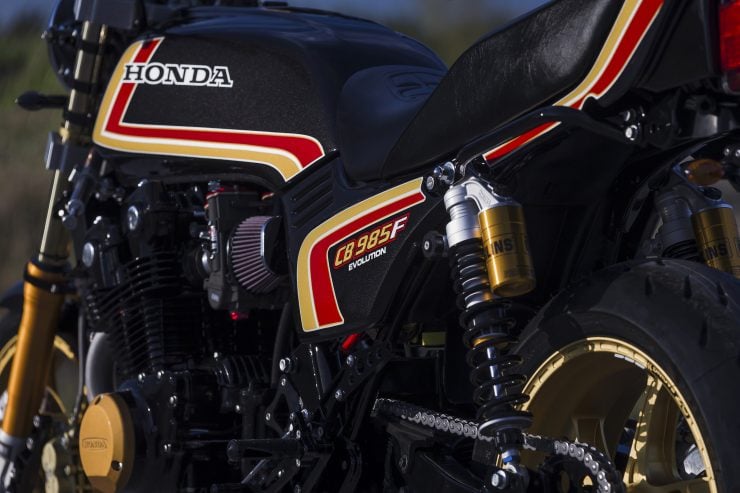 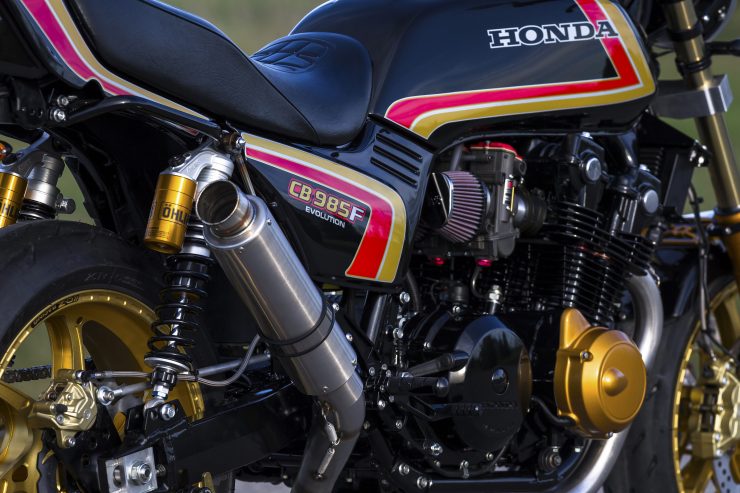 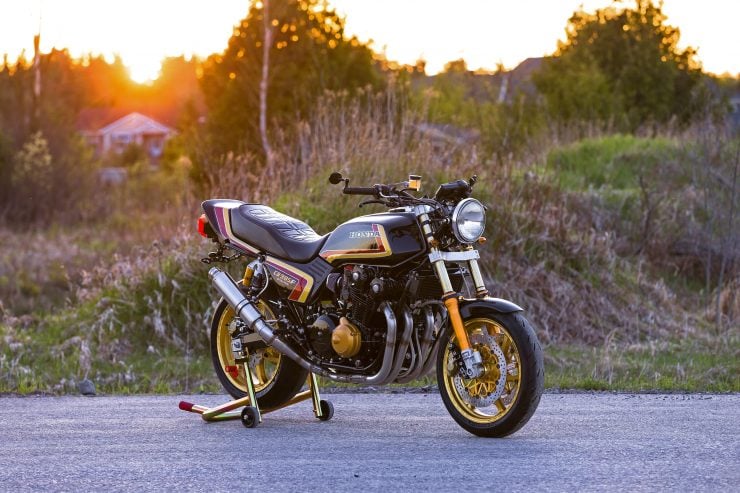 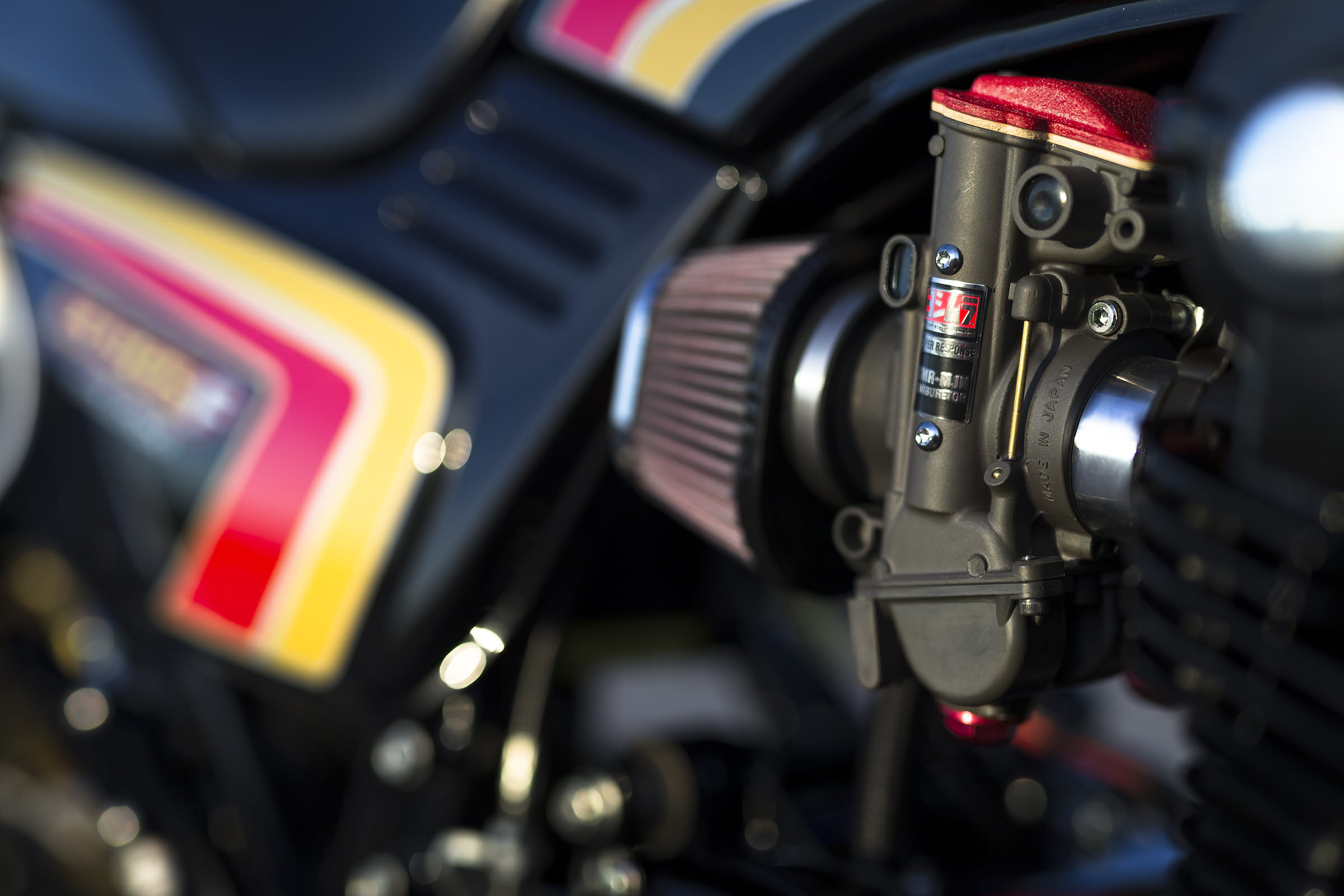