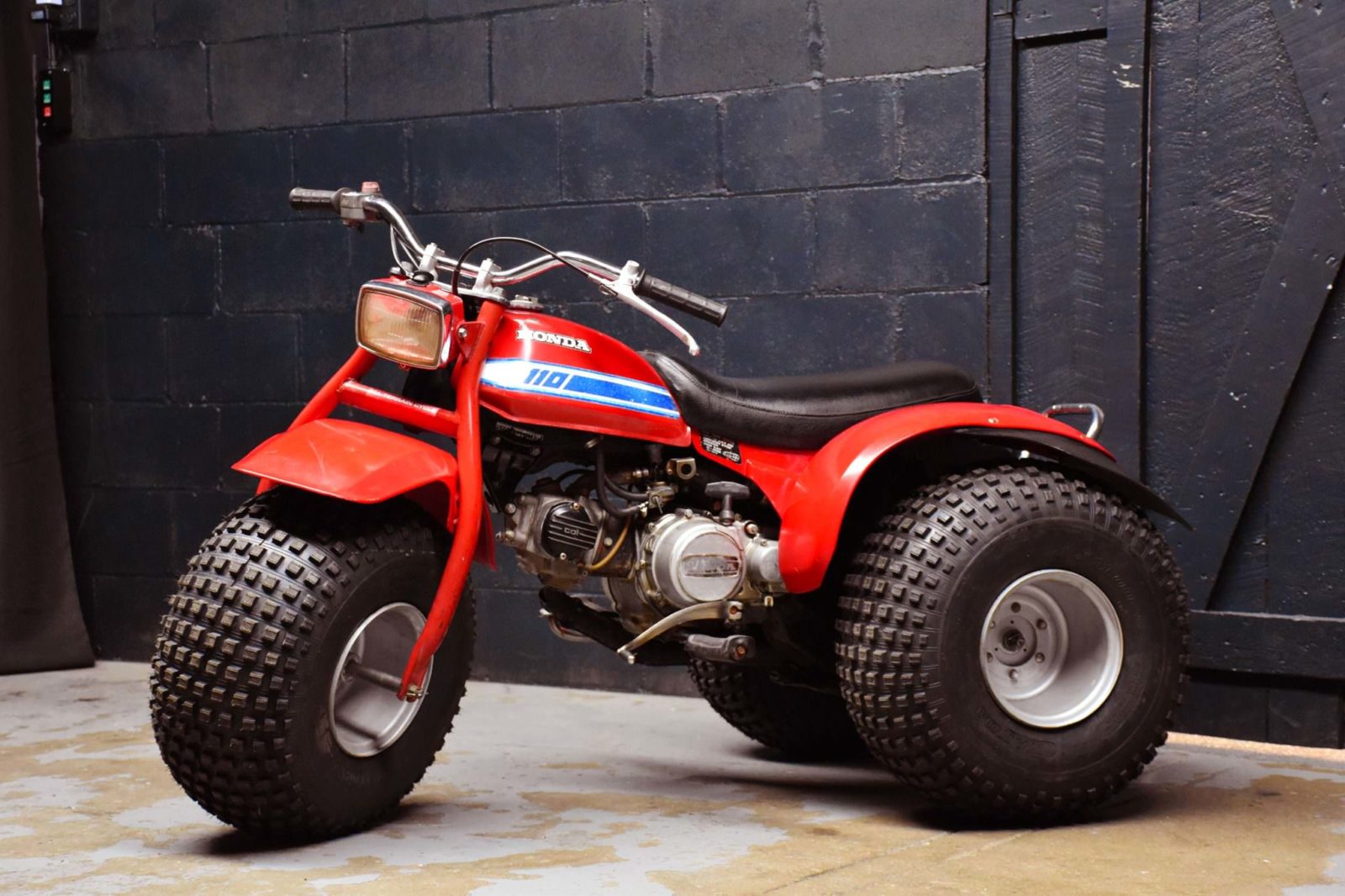 The Honda ATC110 was the most powerful three-wheeler that Honda had ever made when it was introduced in 1979. Honda had launched the ATC genre in 1970 with the release of the US90, and they would remain market leaders until the demise of the three-wheeler in the late 1980s.

The US90 is best remembered today for its appearance in the 1971 James Bond film Diamonds Are Forever, where Sean Connery escaped a desert lair riding one – while being pursued by henchmen of course.

Osamu Takeuchi And The Power Of Three Wheels

As the story goes, Honda executives were looking for a new vehicle type to help keep revenues up during the colder winter months, when motorcycle sales typically slow down. 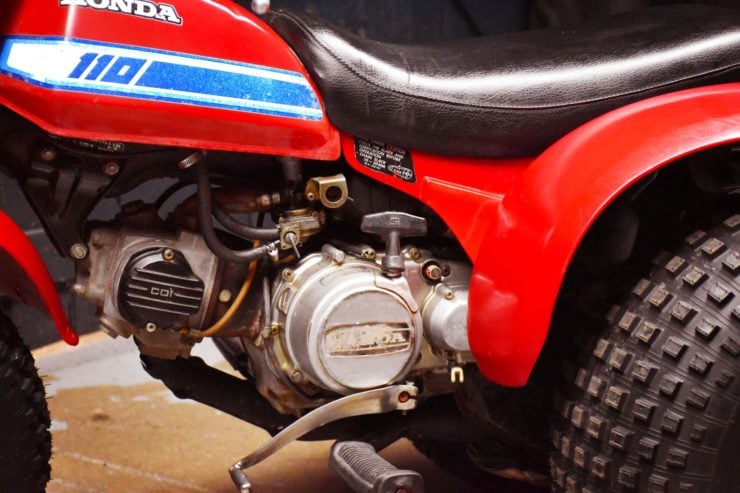 The ATC110 is powered by a 105cc four-stroke, air-cooled, horizontal OHV single-cylinder engine with a puller starter like an outboard engine.

In 1967 a Japanese engineer named Osamu Takeuchi was tasked with coming up with a new kind of motorcycle that dealers could sell in the winter.

He worked his way through a range of difference vehicle concepts, from traditional two-wheeled motorcycles all the way up to six-wheeled ATVs. Eventually he took some inspiration from pre-existing amphibious six-wheeled ATVs by borrowing their balloon tires that were perfect for use on snow and soft ground.

Takeuchi came up with a three-wheeled design that had a very low curb weight, it spread its weight out over three balloon tires, and thanks to its single front wheel it could break steered like a normal motorcycle without any complicated steering mechanism required.

Honda put the design into production as the Honda US90 and released it in 1970, it enjoyed some level of immediate success but the appearance of the US90 in the 1971 James Bond film Diamonds Are Forever in a nail biting chase scene seared it into the minds of movie goers around the world. 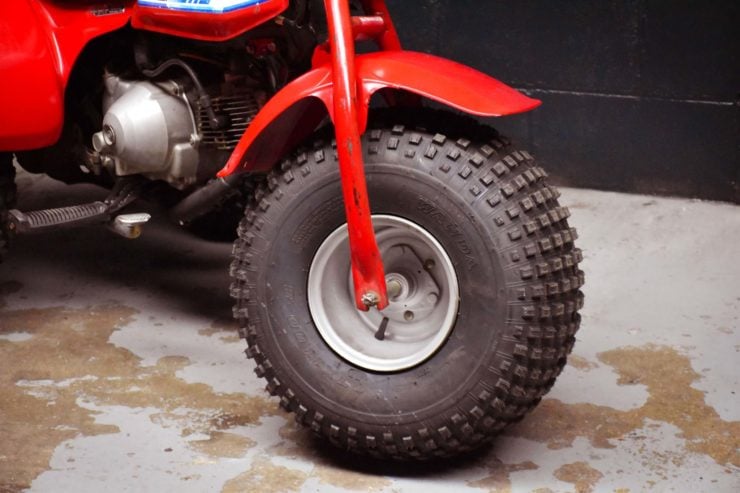 The three-wheeled design with the single front wheel helped keep the design simple and meant that it didn’t need a complex steering mechanism like a quad bike – it also made the bikes challenging to ride for novices resulting in a significant number of accidents.

The Arrival Of The Honda ATC110

While the US90 had proven popular, the one minor gripe had been a lack of power from the 89.5cc single-cylinder engine.

A largely redesigned three-wheeler was developed with a more powerful 105cc four-stroke, air-cooled, horizontal OHV single-cylinder engine, it was named the ATC110 and it was released nine years after the original in 1979.

The ATC110 was a little bigger and a lot stronger than the smaller 90cc and 70cc models that had come before it. It was fitted with knobby balloon tires front and back covered with wide mud guards.

After the release of the ATC110 Honda would continue on the same path, building ever bigger and more advanced three-wheelers until production stopped in 1987, when they were replaced with the more stable four-wheeled “quad bikes.” 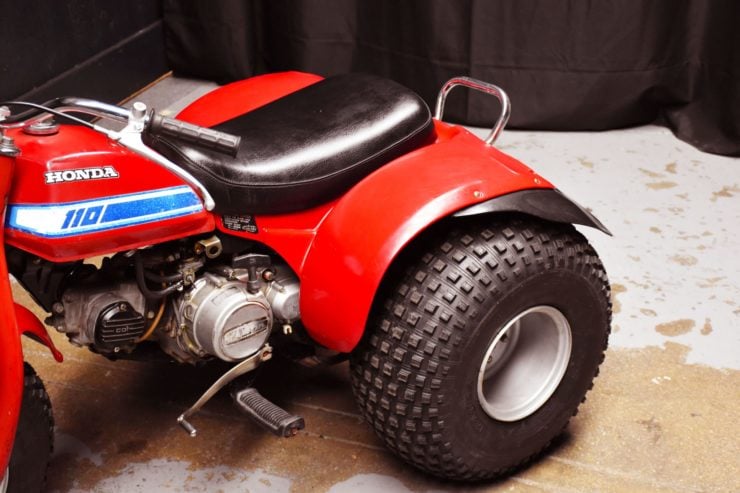 The large balloon tires were inspired by the design of earlier 6×6 amphibious ATVs.

The Honda ATC 110 you see here is a 1981 model just the second year of production. It’s finished with classic Honda blue and white graphics and its tires were replaced in 2021.

Relatively few of the hundreds of thousands of three-wheelers that were made have survived to the current day. They were seen as dangerous and less rider-friendly than quad bikes, and as a result many of them have been scrapped.

Original, unrestored survivors like the ATC you see here are highly collectible, and they’re great fun to ride too so long as you know what you’re doing.

This ATC110 is currently being offered on Bring A Trailer out of Hortonville in Wisconsin, if you’d like to read more about it or register to bid you can click here to visit the listing. 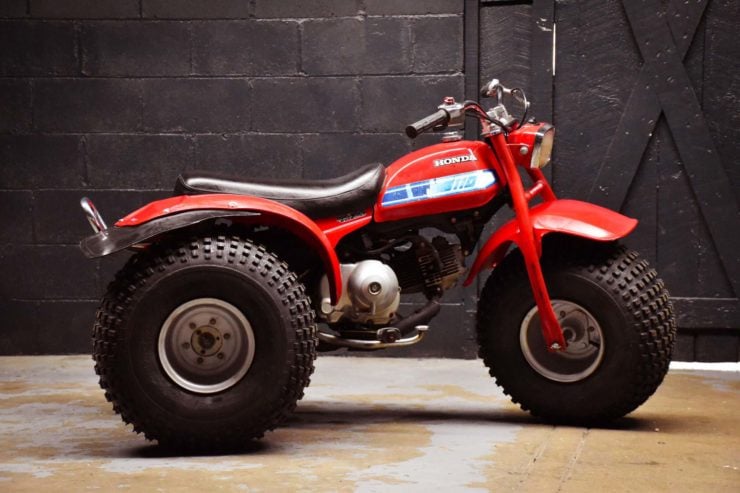 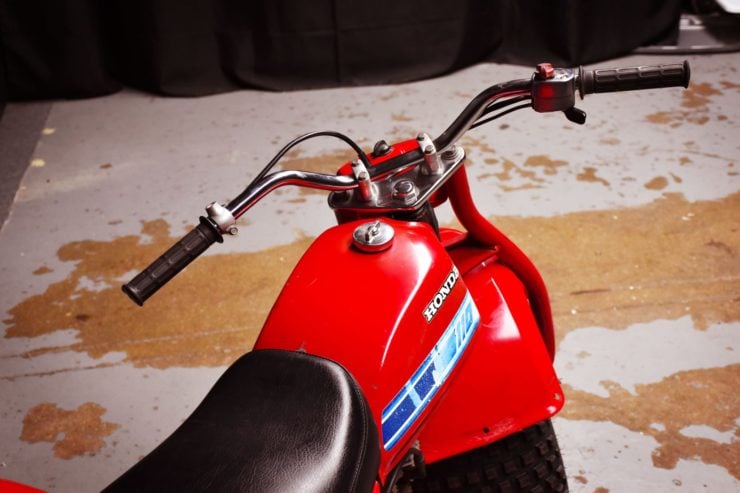 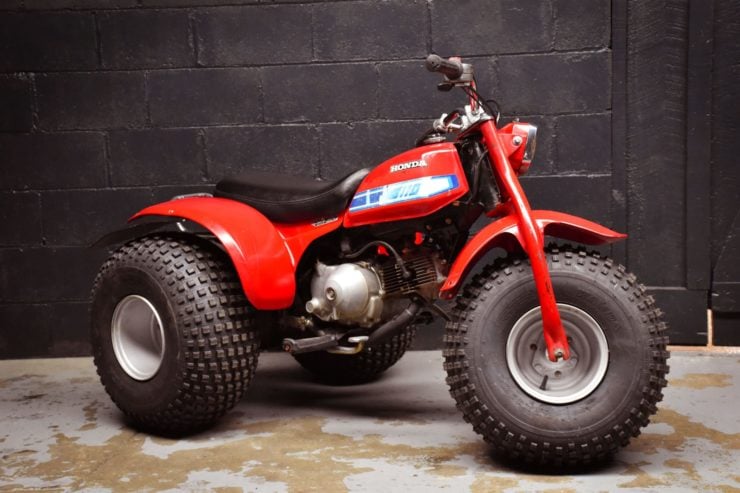 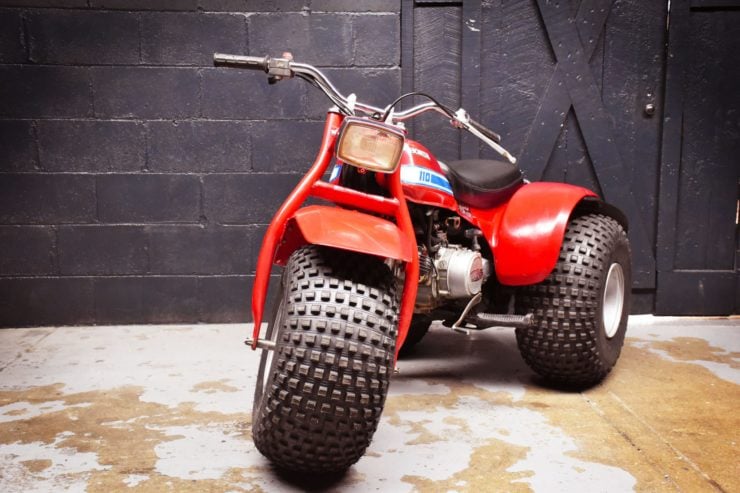 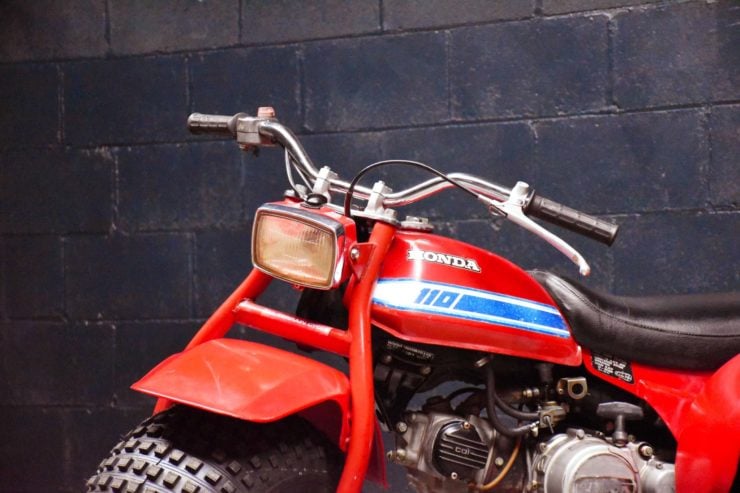 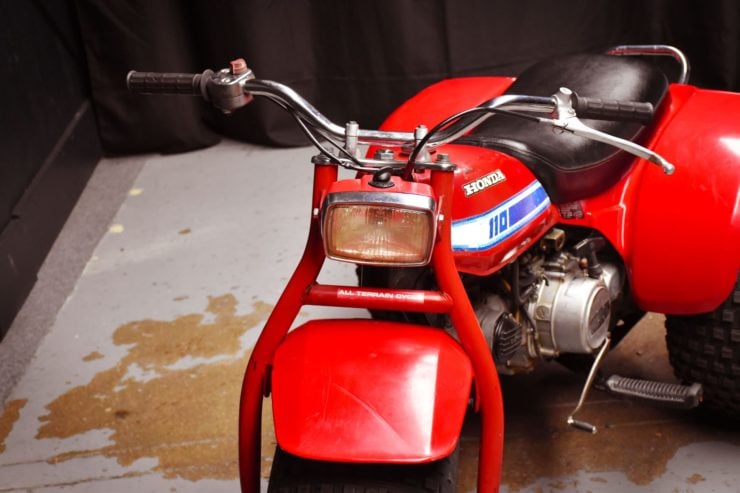 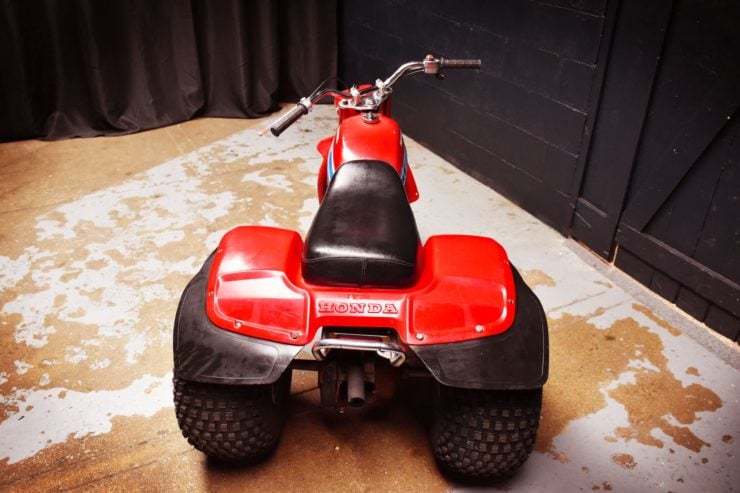 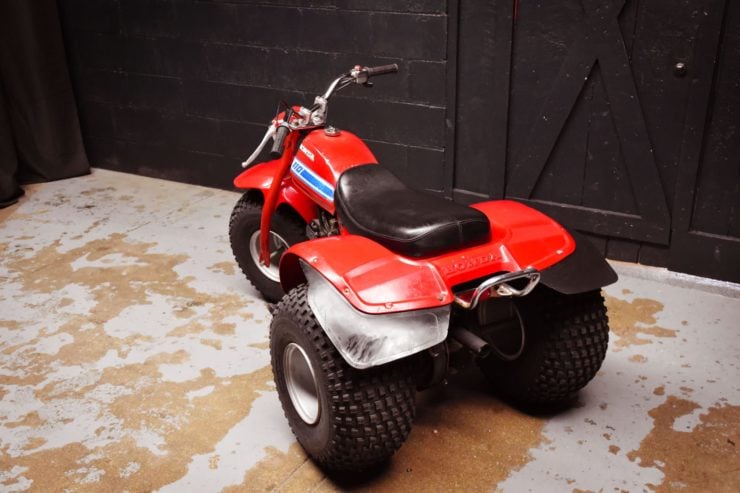 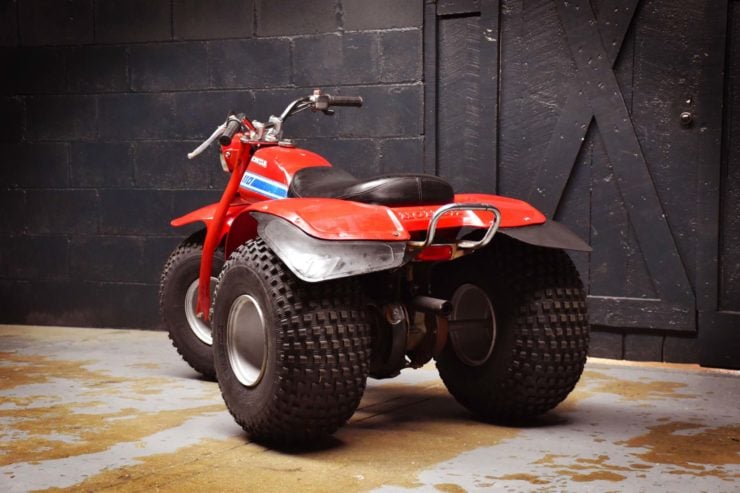 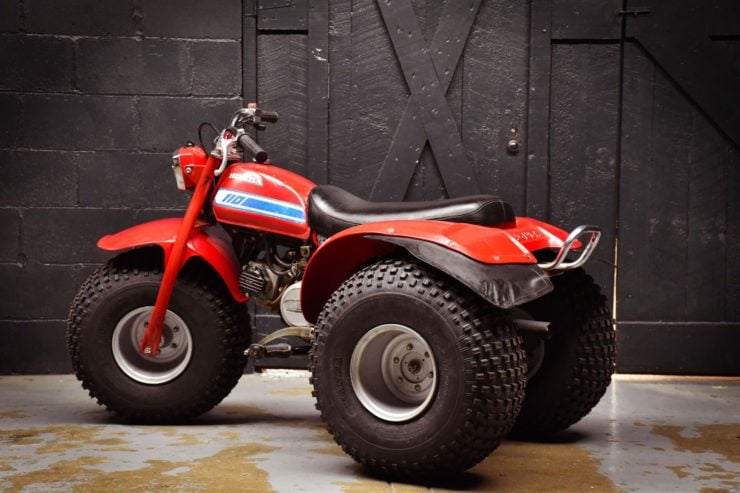