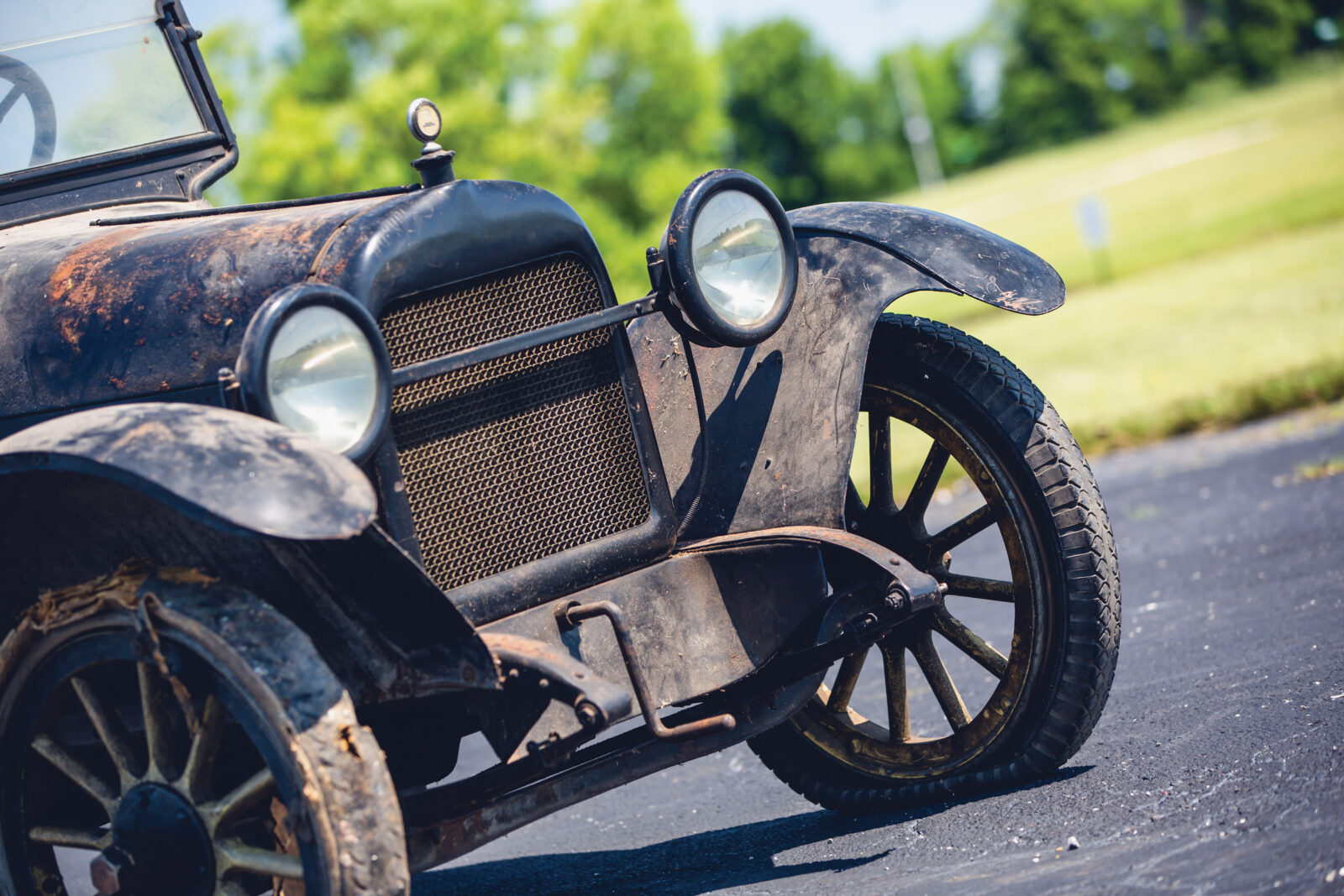 The Harroun Model A-1 was the first production car designed and developed by Ray Harroun, the first man to win the Indianapolis 500 in a car he helped design and build – the legendary Marmon Wasp.

The “Little Professor” Ray Harroun And The Indianapolis 500

Ray Harroun was one of the leading race car engineers of his era and he was given the nickname “Little Professor” by his colleagues, he refused to accept the title of “race car driver” as he said he only drove them to better observe how the cars he developed performed under racing conditions.

Despite this refusal to be called a racing driver Harroun became one of the most successful racing drivers of the early 20th century, he won no less than 7 races at Indianapolis including the first running of the Indy 500 in 1911.

Earlier in his career Harroun was part of a four man team that set the land speed record driving from Chicago to New York in 1903, their record was broken shortly after so the men set off again the following year and retook the record, setting a time of 58 hours and 35 minutes. 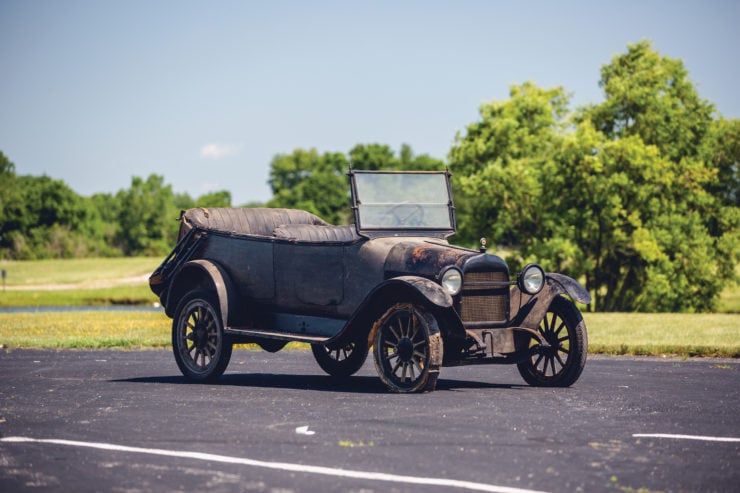 Howard Marmon worked closely with Ray Harroun for years on a number of cars, culminating in the Marmon Wasp, the first open wheel, single seat race car. Harroun famously did away with the extra seat for the mechanic who also doubled as a spotter, replacing him with a rear vision mirror. Rear vision mirrors would quickly become commonplace on other race cars as it allowed them to lose the weight of the additional man, and narrow the body for better aerodynamics.

A year before his win at the Indy 500 Harroun partnered with Carl S. Bates (of the Bates Engineering Co.) to develop their own aero engine and aircraft, an advanced monoplane design with a steel frame, aluminium sheet skin, and front mounted 24-hp, 2-cycle Bates-Harroun engine. Both Bates and Harroun flew the plane, and it would be many years until their all-metal aircraft design become the de facto standard.

There were no official “championships” for racing drivers when Harroun was actively racing, however in 1927 points were assigned retroactively by the American Automobile Association and Harroun was declared the champion of the 1910 season. This was a remarkable achievement that capped his racing career which included 60 starts and 19 wins. 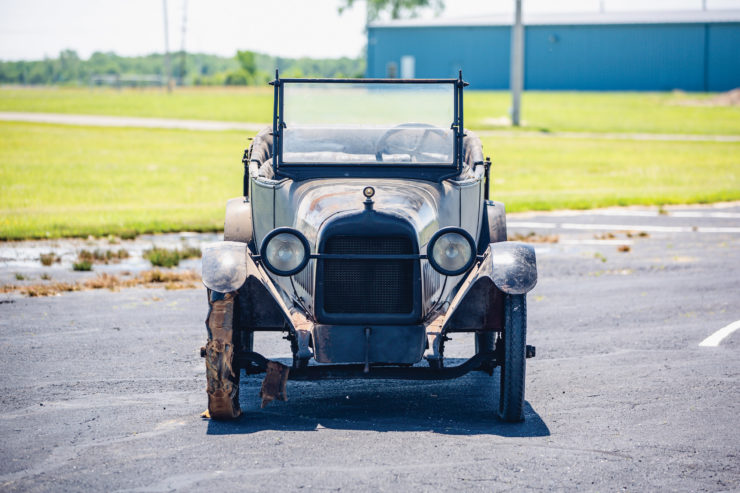 In 1916 Ray Harroun started his own automobile company in Wayne, Michigan, called the Harroun Motor Car Company. He brought in investors and equipped a large modern factory capable of building 200 cars a week, and he developed a car that he felt America needed – the Harroun Model A-1.

The Model A-1 was powered by an inline-4 cylinder engine that Harroun and his engineers had developed, it was an overhead valve design with exposed springs and rockers as was commonplace at the time. The engine was capable of 16 hp and reportedly got good fuel economy for the time, it was mated to a 3-speed manual transmission, the car had a 107 inch wheelbase, four doors, it could seat 5 in two rows of bench seating, and there’s a folding roof for inclement weather.

Very few people owned cars in the mid-1910s and the ability to drive was reasonably rare, so Harroun had special pedals made for his cars that labelled the clutch and braking functions so drivers wouldn’t confuse the two with dire consequences. He also fitted his cars with shock absorbing steering wheels, roads of the time were little more than stony dirt tracks, and they sent all of the bangs, bumps, and crunches from the road directly up into the driver’s arms.

The onset of WWI would spell the death knell of the Harroun Motor Car Company, the government had the factory switch from making cars to making artillery shells but payments from Uncle Sam were so delayed that the company folded along with many others. 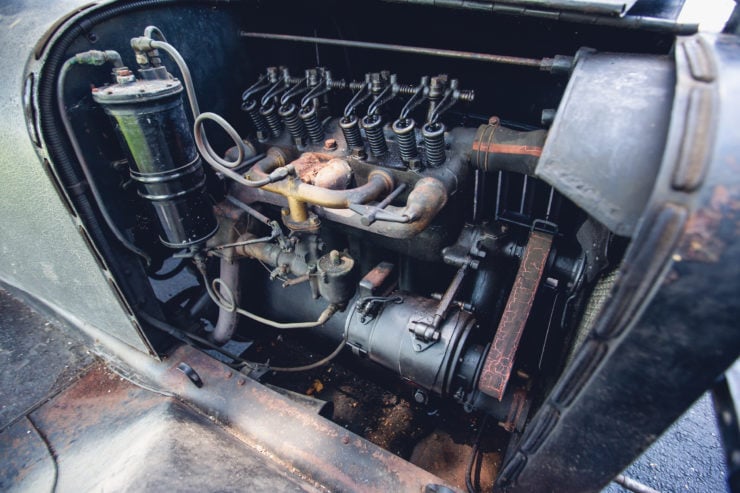 Surviving examples of the Harroun Model A-1 are now much sought after by collectors, the history of the car and its creator is fascinating, the car car is known for being remarkably reliable for the period in which it was built.

The car you see here is an original unrestored 1918 Harroun Model A-1 Touring, surely either the last in the world in this condition or close to it. Only 326 Harrouns were built in 1918 due to the war effort and this is believed to be one of only two survivors.

It’s believed to be complete and comes out of long-term covered storage which explains the excellent condition it’s in considering the fact it’s over 100 years old. The Model A-1 uses a traditional body on frame design with front and rear leaf springs and rear drum brakes. The car still has its glasswork intact including the two-piece windscreen and headlights, and it even appears to be still fitted with its original wooden wheels and rubber tires.

If you’d like to read more about this car or register to bid you can click here to visit the listing on RM Sotheby’s. It’s estimated to sell for between $15,000 and $20,000 USD when it crosses the block at the Auburn Fall auction held between the 29th of August and the 1st of September. 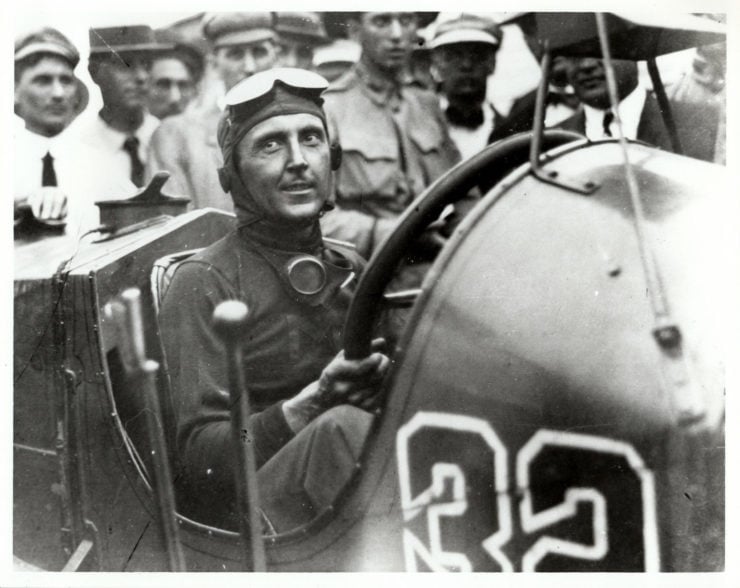 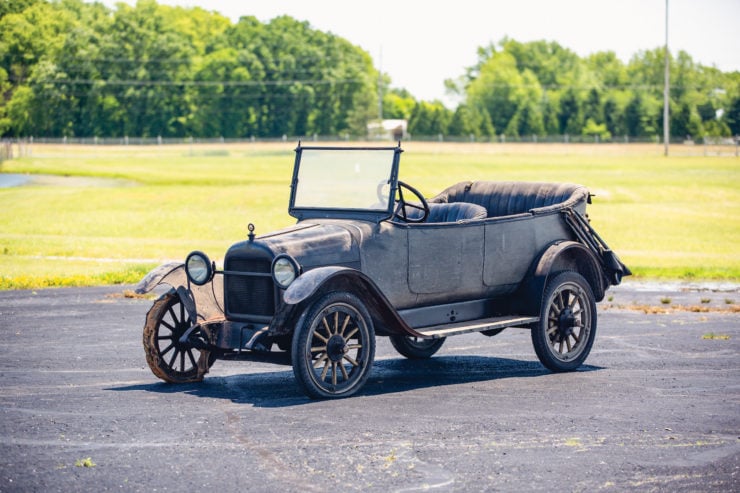 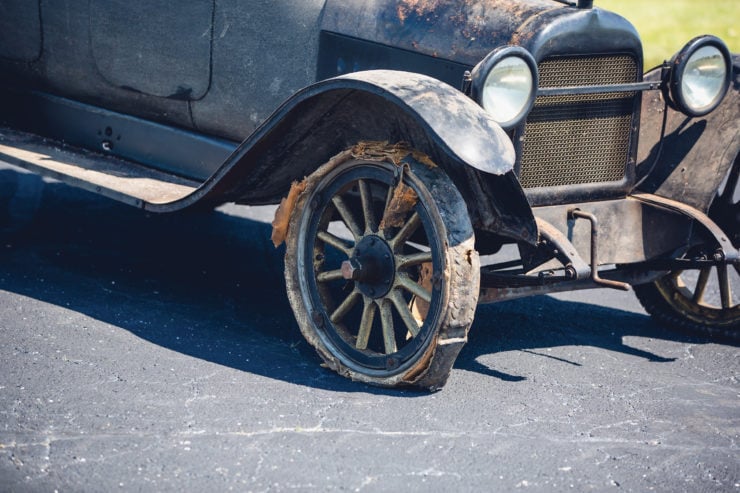 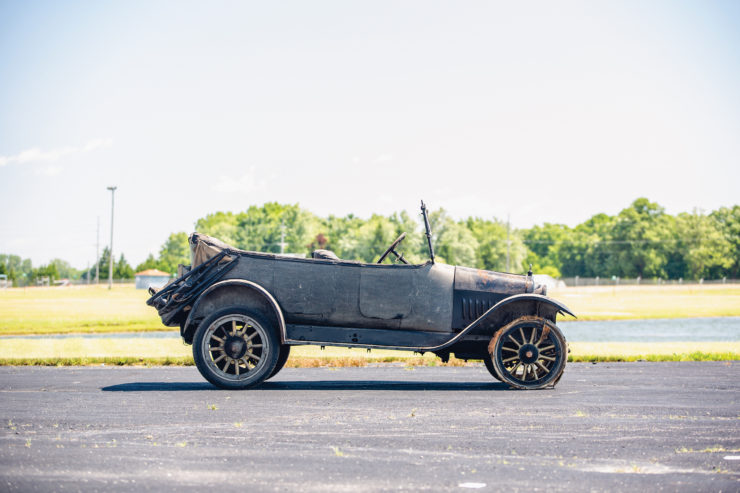 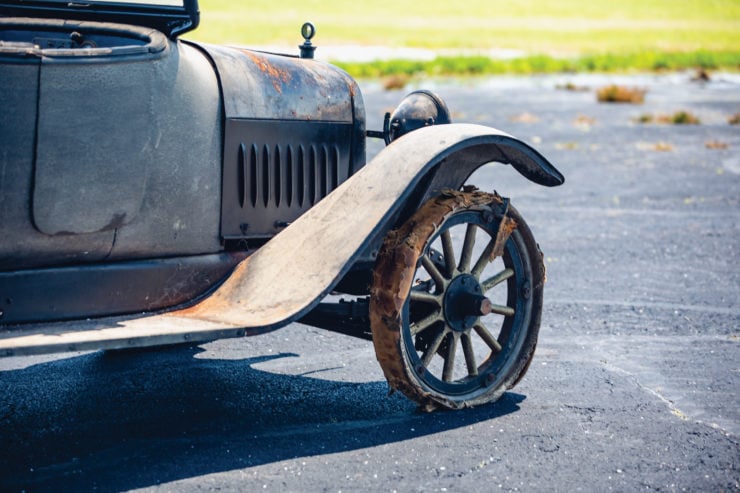 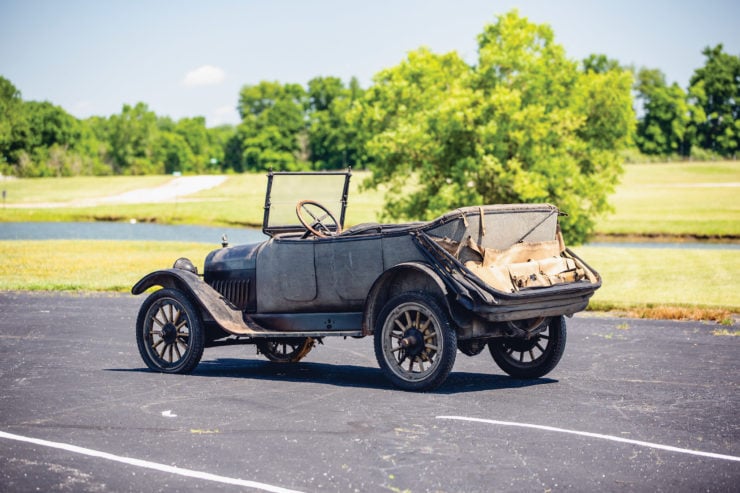 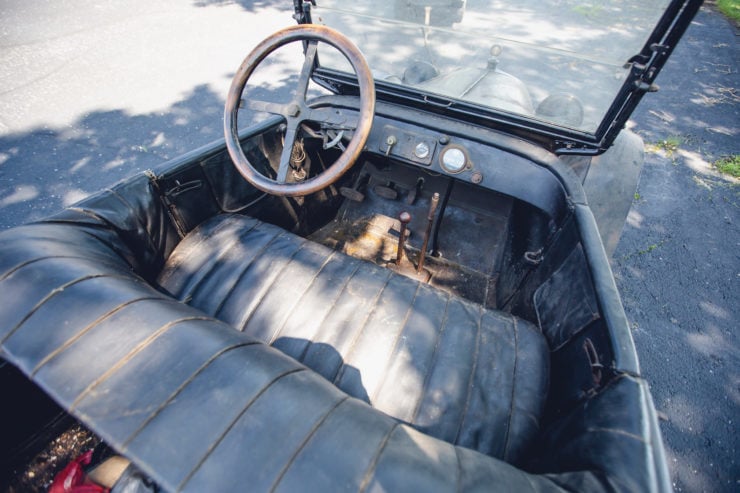 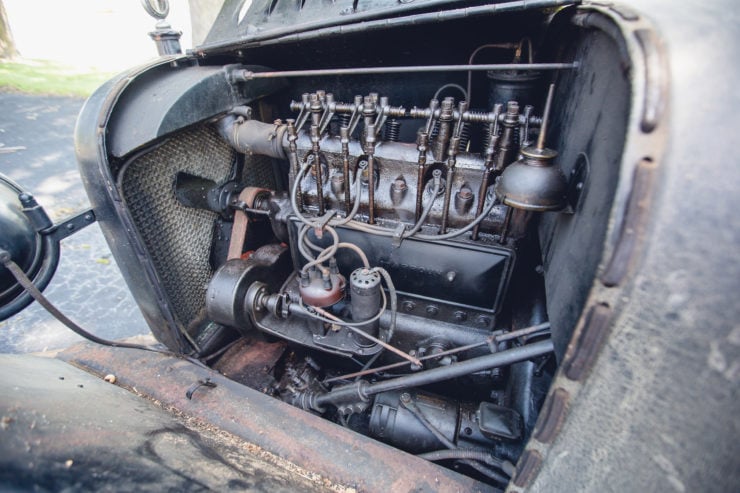 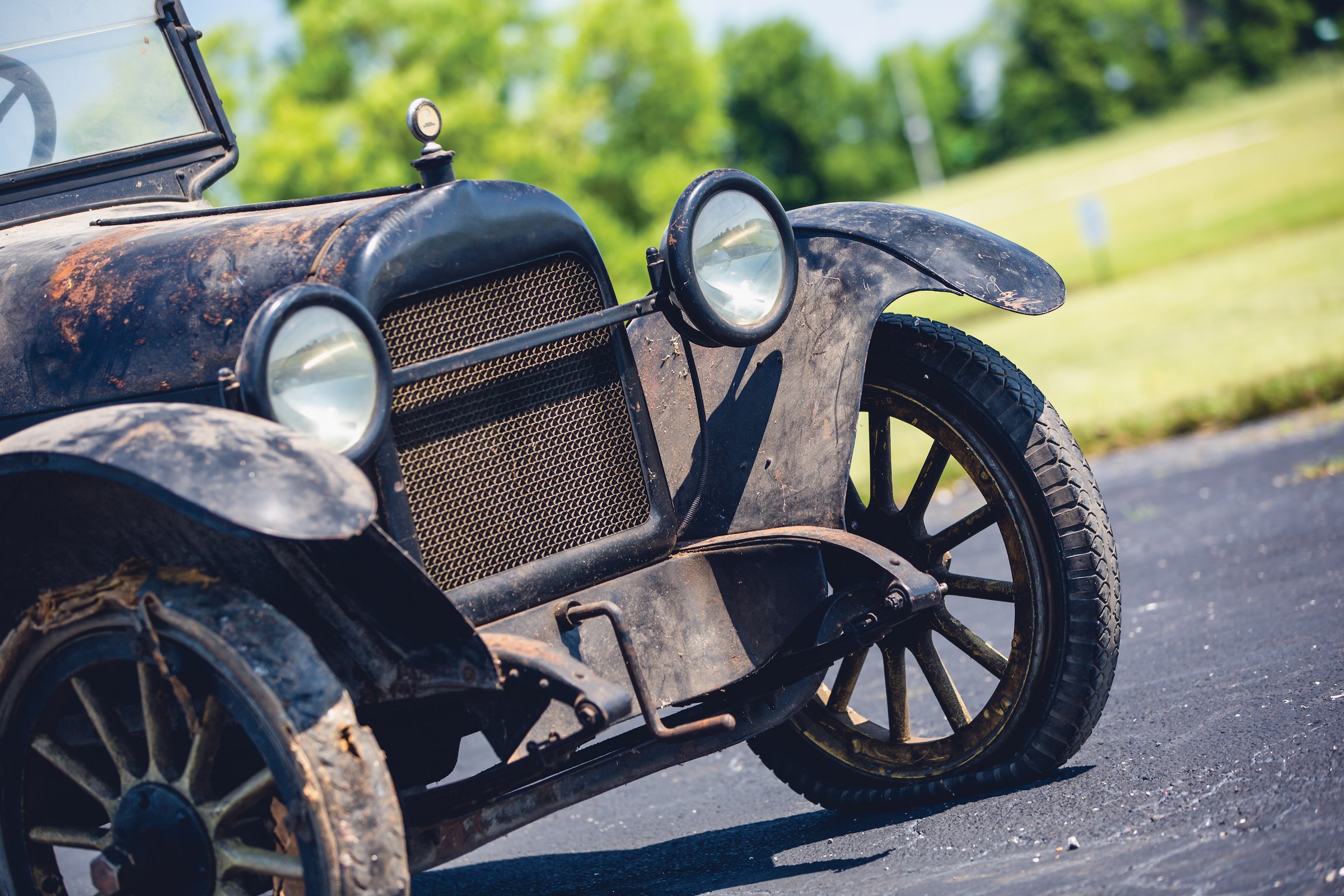