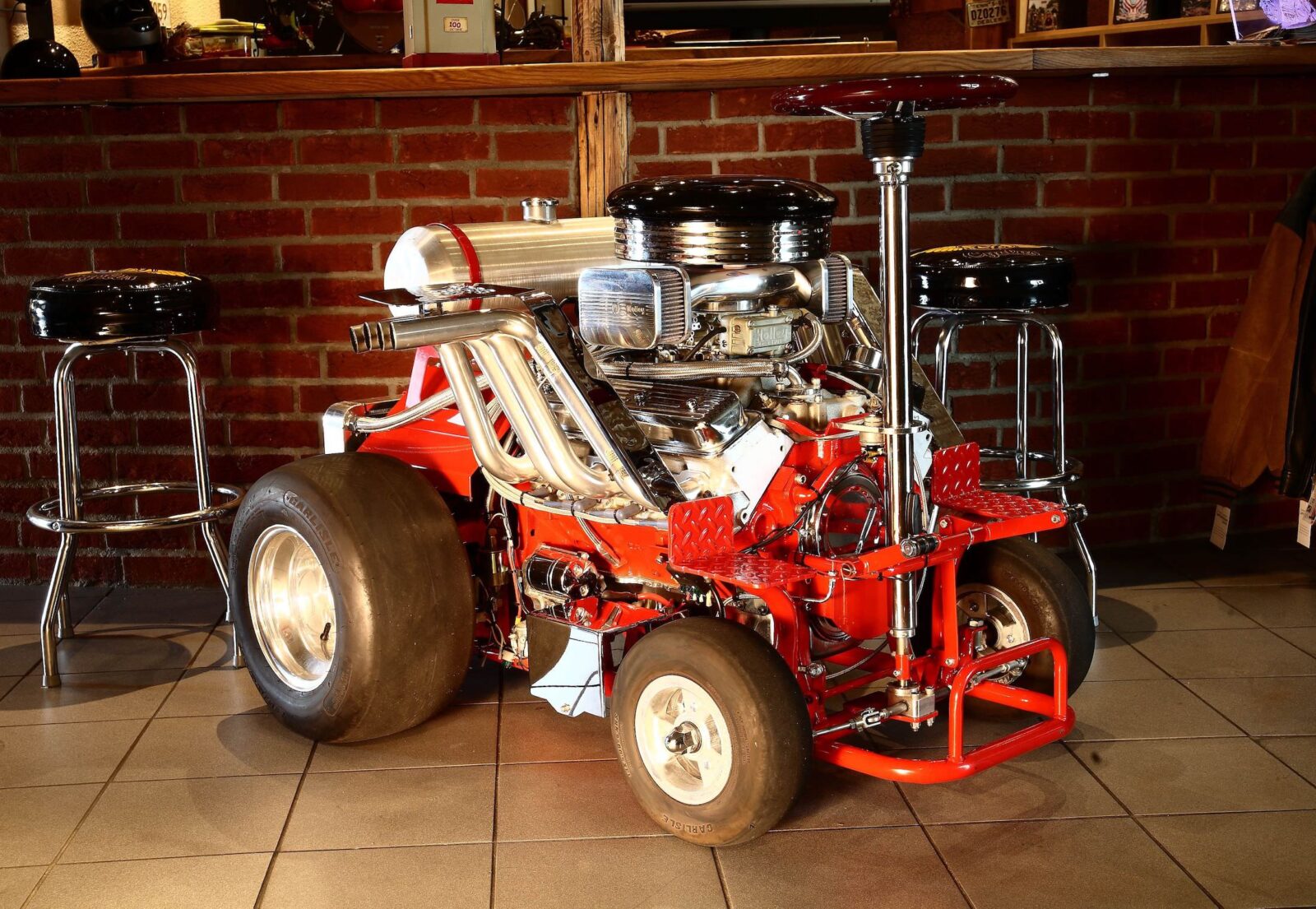 Above image used for reference, this is not the specific Hoss Fly being sold by Bonhams.

The Hoss Fly is a Chevrolet V8-powered barstool created by the team behind the Boss Hoss, an American V8-powered motorcycle that holds the record for having the largest engine of any production motorcycle.

Whereas the Boss Hoss is a series of road legal motorcycles, the Hoss Fly is designed as a non-road legal novelty vehicle that has a top speed of 25 mph, a towing capacity of 2,000 lbs, and it fits neatly into the back of a pickup truck.

The driver sits atop a barstool seat mounted to the top of the V8 engine’s air cleaner, steering is accomplished using a steering wheel on a vertically-mounted steering shaft connected to the front wheels and there are two pedals – the right pedal is the accelerator and the left pedal is used to select forward or reverse.

There are two main categories of the Hoss Fly, the small block and big block versions. The small block Hoss Fly has a 347 cu. in. (5.7 litre) Chevrolet V8 crate engine capable of 250 hp, these engines respond well to performance upgrades and can be tuned up to well over 500 bhp, but I’m sure you’d agree that 250 hp is more than enough for a barstool.

The exhaust headers are short and completely un-silenced, the downdraught carburettor and air cleaner have the aforementioned barstool seat mounted to the top, and there’s a rear-mounted allow radiator with an electric thermal fan to keep it running cool.

Allow wheels are mounted front and back, and fitted with what appear to be slick go kart tires, a 5 gallon spun aluminum fuel tank is fitted to the rear, and power is sent to the rear wheels via a hydrostatic transmission. There’s not a whole lot of information available about the braking system used on the Hoss Fly but it would want to be reasonably capable given the power rating, not to mention the 2,000 lb towing capacity.

The team at Hoss Fly offer two kit versions that can be built at home, all you need to supply is the crate engine, the tools, and the labour. The kits are the Hoss Fly Raw Kit and the Hoss Fly Deluxe Kit, you can also order yourself a turn key version that’s ready to go immediately.

The idea of owning a 250 hp barstool will be immediately appealing to most of you, it had me checking my savings account and doing some disappointing math in my head. You’ll need a pick up truck or trailer to transport it of course, any attempt at driving it on the road will likely result in the local constabulary having a fantastic new toy in the impound lot and a great story to tell down at the pub later.

The Hoss Fly you see here is currently in the UK, it’s thought to be worth £4,500 to £5,500 and it’s due to be sold at the Goodwood Revival auction on the 14th of September by Bonhams. If you’d like to read more about it or register to bid you can click here to visit the listing. 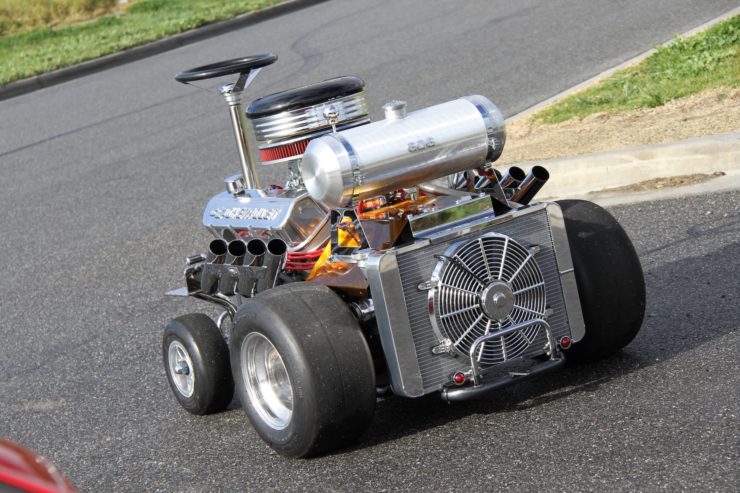 Above image used for reference, this is not the specific Hoss Fly being sold by Bonhams. 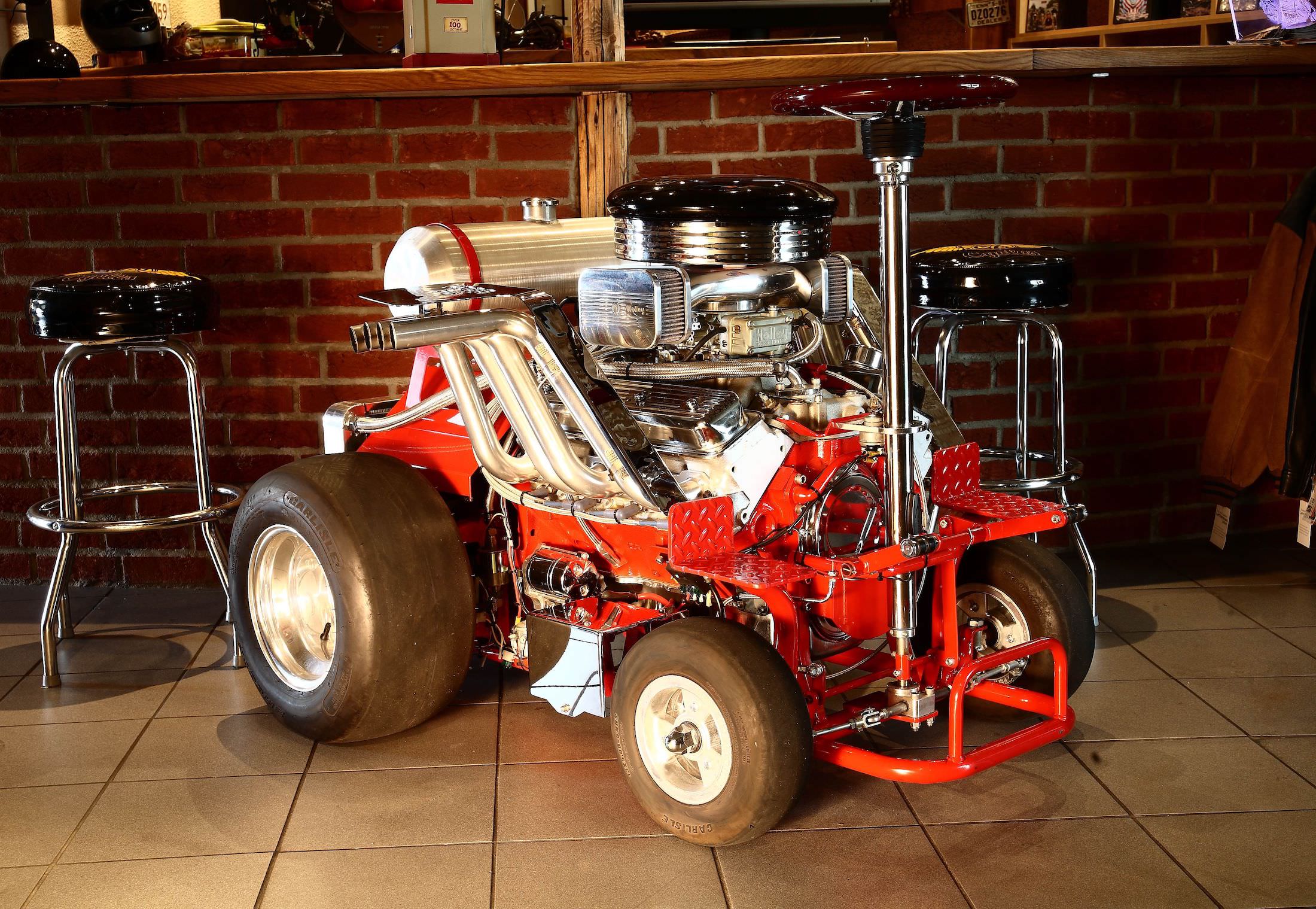 Published by Ben Branch - August 27th 2019
Related Posts
Full Documentary: Thrust 2 “For Britain And The Hell Of It”