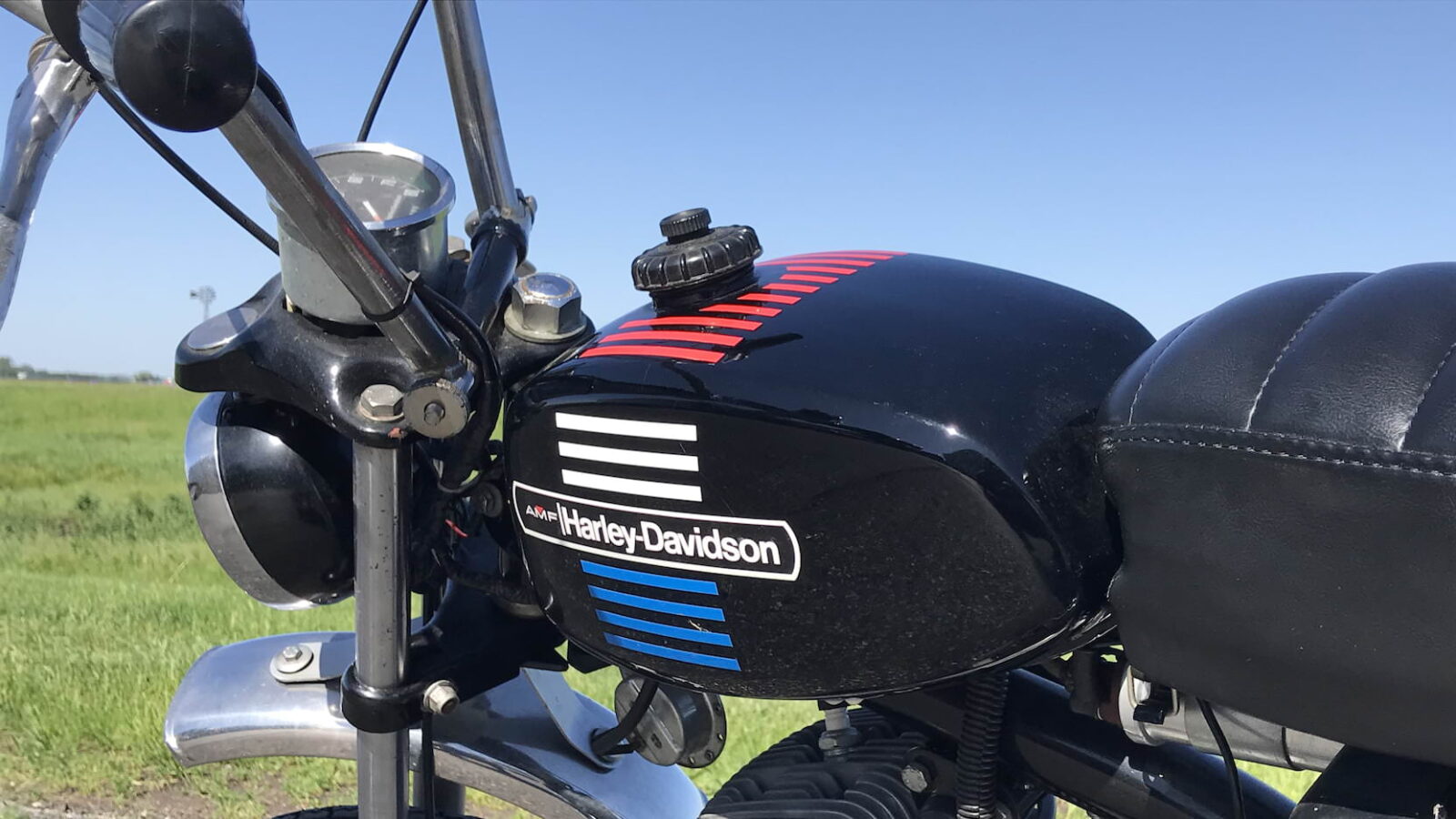 The Harley-Davidson X90, commonly referred to as the “Shortster” was a mini Harley two-stroke built by an Italian company that started out making fighter aircraft during the First World War.

The 1970s are remembered as a time that wasn’t great for Harley, “the AMF years” as many call them were hallmarked by largely outdated designs and a failure to adequately challenge the big four Japanese motorcycle manufacturers. Funnily enough the same mistakes were being made on the other side of the Atlantic in Britain and Italy, resulting in the Japanese motorcycle industry taking over the world.

The Harley-Davidson X90 was originally developed as an Aermacchi in Italy however Harley owned 50% of the Italian motorcycle manufacturer and they had been re-badging their smaller capacity motorcycles as Harleys in the US for years.

Aermacchi had started out building licensed copies of Nieuport fighter aircraft just before WWI, the company became one of Italy’s biggest aircraft manufacturers by the time of the Second World War. In the years after WWII they diversified into motorcycle production, a path also followed by MV Agusta. 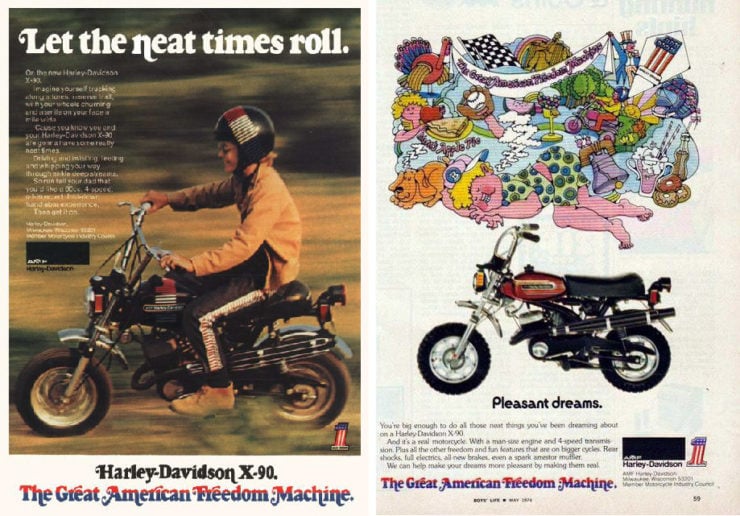 Honda had released the original Monkey Bike in the mid-1960s, it was a miniature motorcycle that could be ridden by children and adults alike, it had an affordable MSRP, and it was easy to control. Honda was selling as many Monkey Bikes as they could build and many other manufacturers wanted to get in on the action including Aermacchi and Harley.

The X-90 was developed in Italy by Aermacchi engineers, two-stroke motorcycle engines were popular at the time and so the engine they used in the model was a 90cc single-cylinder two-stroke, with a bore x stroke of 48mm x 50mm and 8 hp. The model was kickstart only and power was sent to the rear wheel via a standard four-speed transmission with a wet multi-plate clutch.

Although fun to ride, priced competitively and road legal in many US states, the Harley-Davidson X-90 didn’t sell in high numbers, particularly when compared with the minibikes being sold by Honda. Over the course of the X-90’s 1973/1974/1975 production run fewer than 17,000 were sold to the public, and only a small number of these have survived to the modern day. 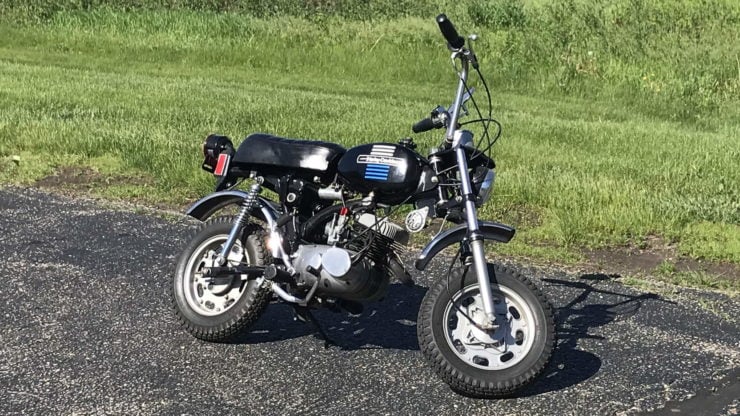 Despite their relative lack of popularity back when they were new the Shortster has become a bit of a cult classic thanks to its interesting history and quirky looks. There was a time not that may years ago when you would struggle to give them away but this has all changed now, people are seeking out original X-90s to restore and people have started collecting them.

The 1973 Harley-Davidson X-90 you see here is an original and unrestored example with just 2,890 miles on the odometer. It’s from the first year of production and it carries its original classic paint scheme.

If you’d like to read more about it or register to bid you can click here to visit the listing on Mecum, it’s due to roll across the auction block in mid-July and at the time of writing there’s no estimate. 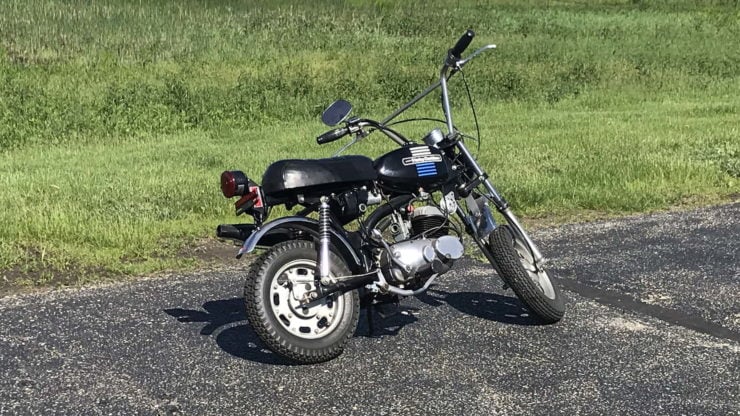 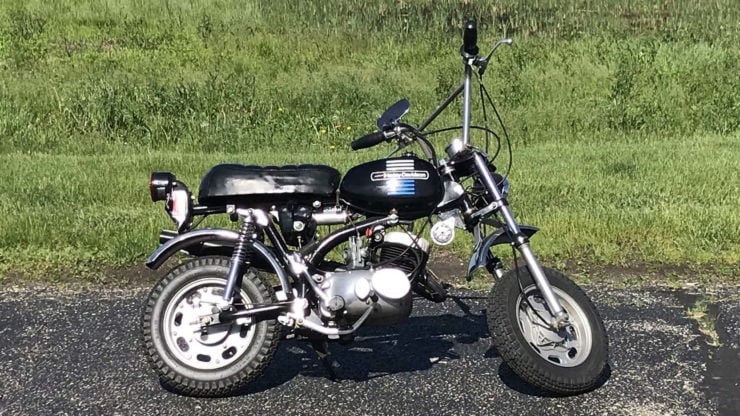 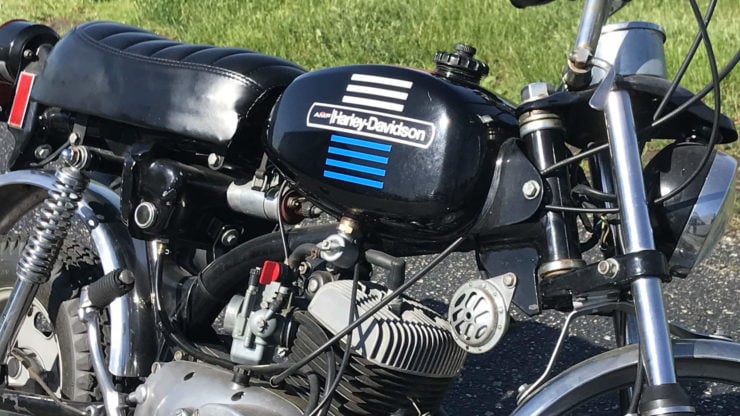 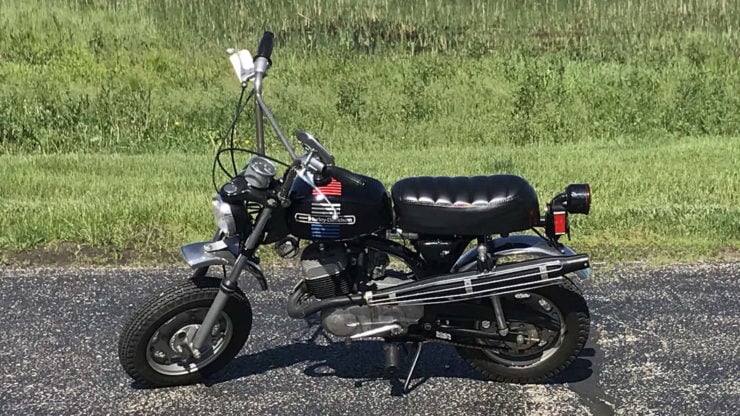 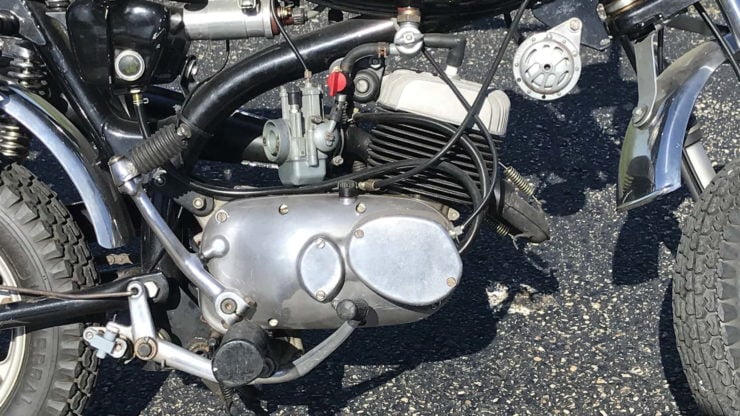 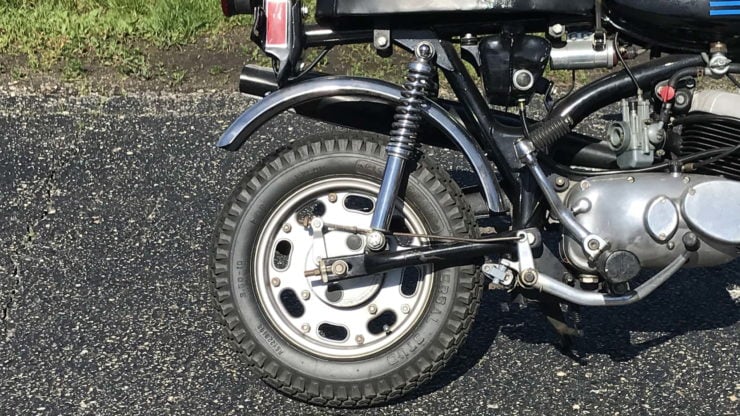 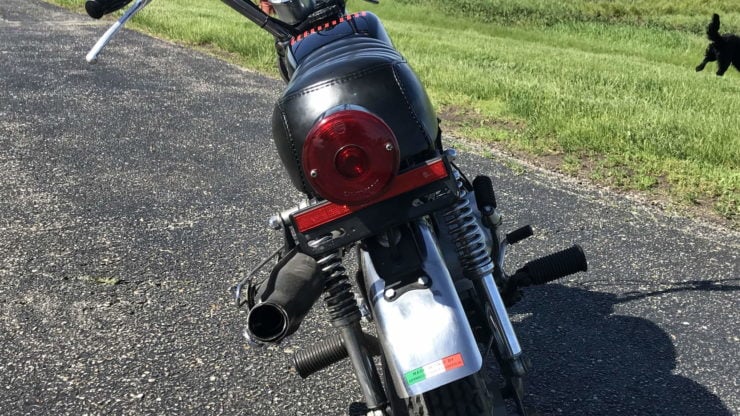 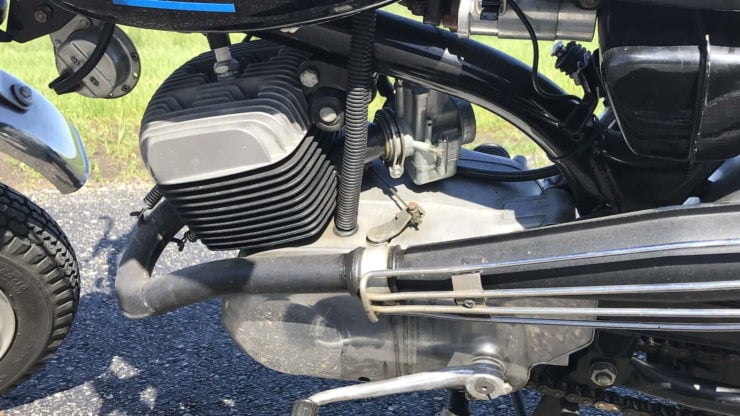 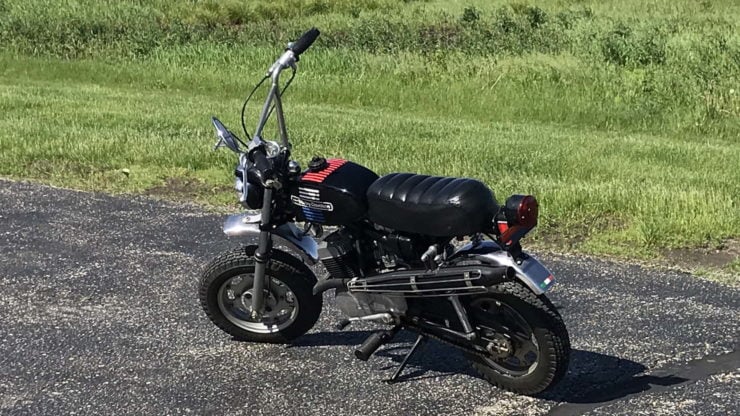 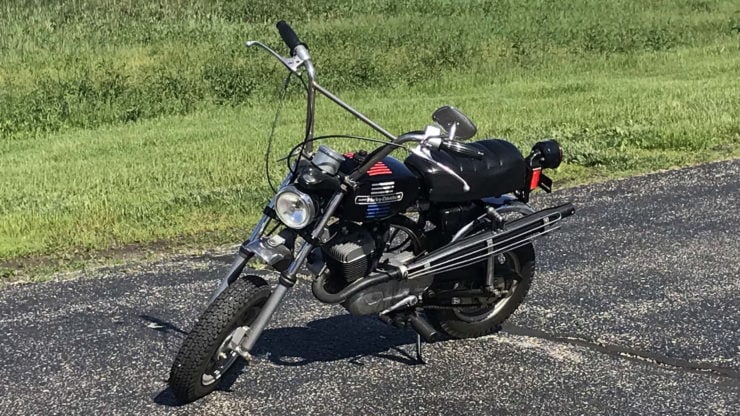 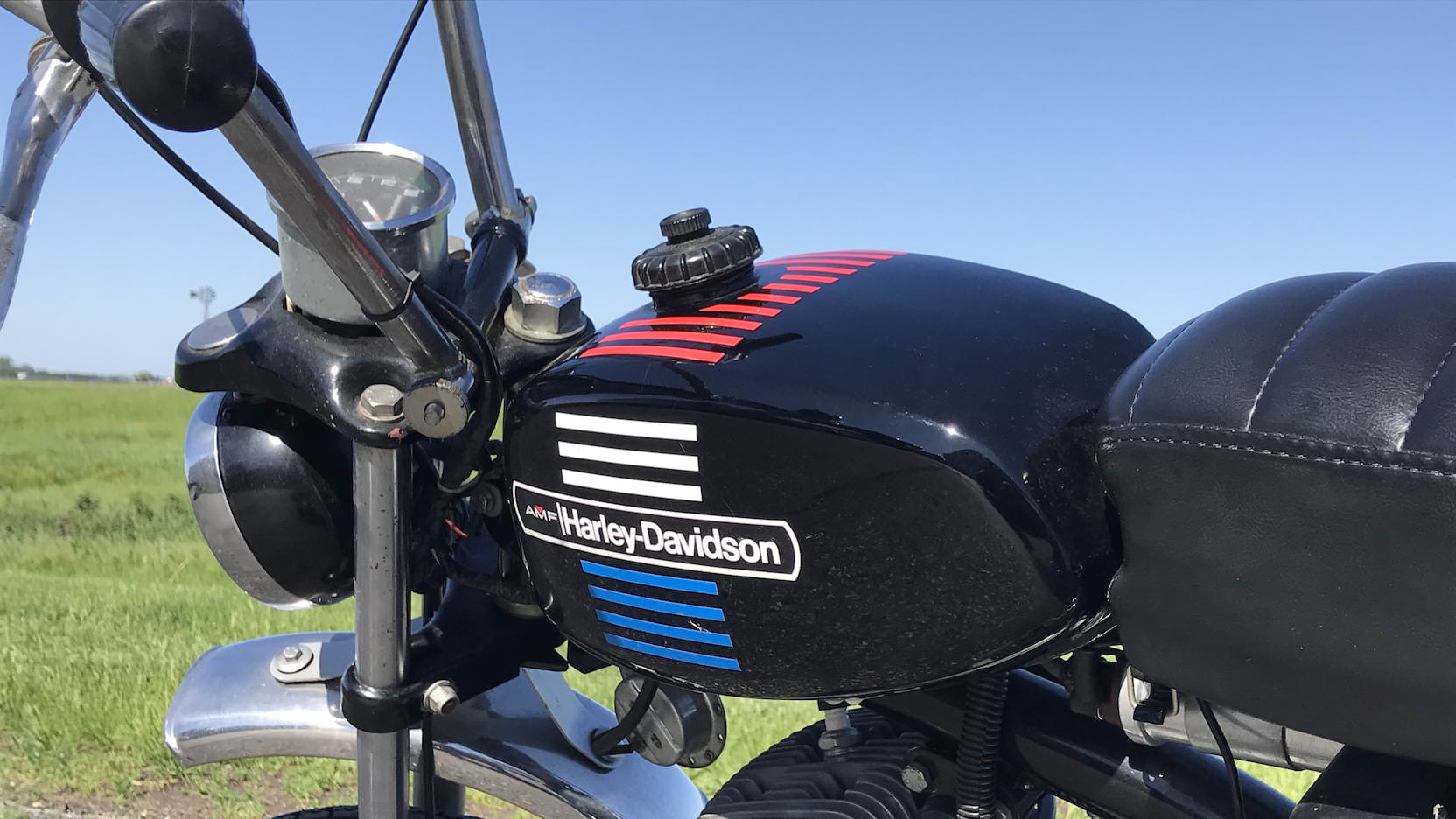