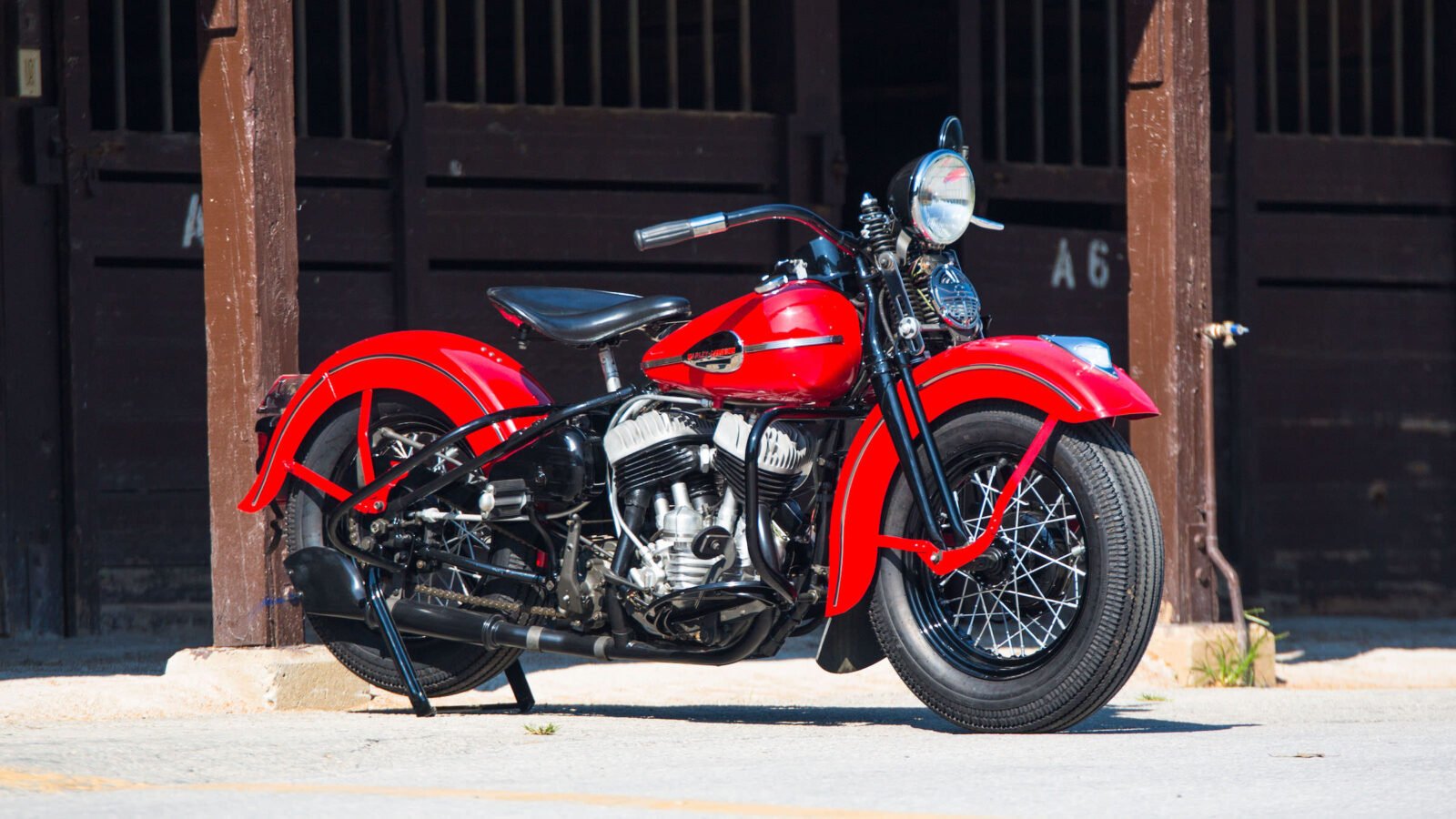 Steve McQueen famously owned a Harley-Davidson WLD, much like the example you see here, and he loved it so much he kept it right up until his untimely death in 1980. While we’ll never be as cool as McQueen, many of us do share his love for machines. And unlike many of his now-multi million dollar sports cars like the Jaguar XKSS and the Ferrari 250 GT Lusso, the Harley-Davidson WLD is a vehicle we might actually be able to afford.

Harley-Davidson launched the WLD in 1937 as a replacement for the outgoing “D” model. It was powered by the Flathead WL 45 V-twin – the engine that would be the backbone of the company’s lineup, and would also power the iconic Harley-Davidson WLA that was used extensively by the US Army during the Second World War. The extensible engine would also find use in the legendary Class C Flat Track AMA racing series, on dirt ovals right across the USA.

The WLD was the slightly more sporty model, a step up from the WL. It was commonly referred to as the Special Sport Solo, and featured a single seat, a higher compression ratio, and a slight power advantage over its entry-level sibling.

As with all Harleys of the era, the WLD was kept simple and serviceable. It features a single downtime frame, a 3-speed hand shift, a duplex chain primary, a dry multi-disc clutch, 6 volt electrics, a hardtail rear, a springer front end, a Linkert carburetor, a bore/stroke of 2.75″ x 3.81″, and a total capacity of 45 cubic inches (737 cc).

Up front there’s a single headlight, mounted above an electric horn, and both wheels are clad in classic swept Harley fenders. 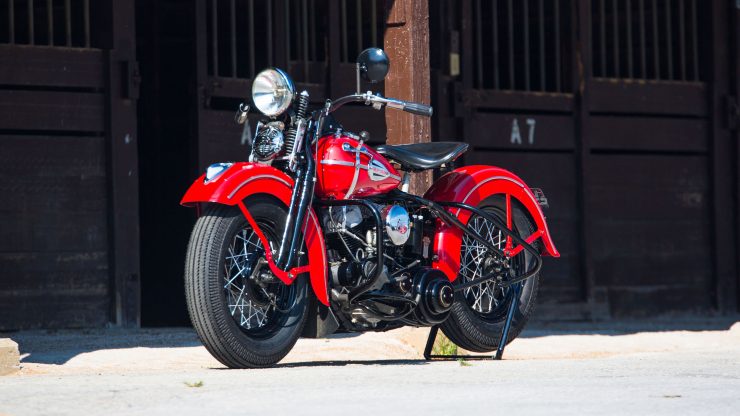 The most famous of the WL series bikes was the aforementioned WLA. The “A” stood for “Army”, as it was a standard issue motorcycle for the US Army – the military would order well over 90,000 units over the course of the war, as well as spare parts for many more. The Harley-Davidson WLA was ridden by hundreds of thousands of GIs during the war in both Europe and Asia, and it would be largely credited with instilling a deep love of both Harley and the humble V-twin into the hearts of a generation of young American men.

After the war many of the WLAs were decommissioned and sold to civilians, many of whom were former GIs. This period is associated with an explosion of motorcycle culture across the USA, much of which happened in the saddle of motorcycles just like the WLD.

The motorcycle you see here is a comprehensively restored example, rebuild using genuine Harley-Davidson factory parts and now showing just 3 shakedown miles on the odometer since the restoration was completed.

It has its original high-compression engine fitted with lightweight alloy heads that do an excellent job of shedding heat. It’s finished off in an attractive red and black paint scheme, with beautiful sweeping red fenders and that iconic red fuel tank.

If you’d like to read more about the bike or register to bid you can click here to visit the listing on Mecum – it’s due to be auctioned between the 23rd and 27th of January and there’s currently no listed estimate. 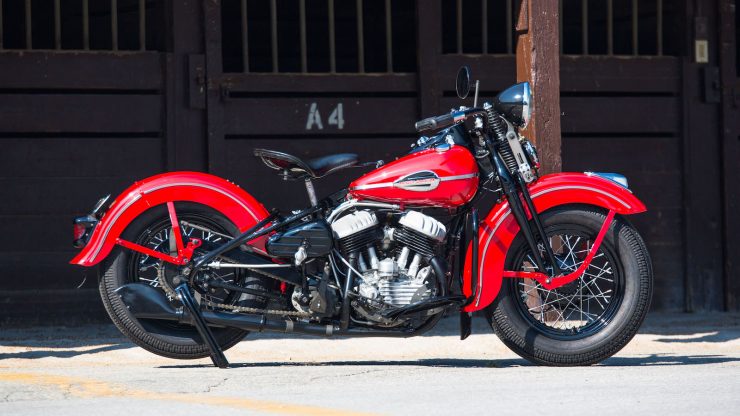 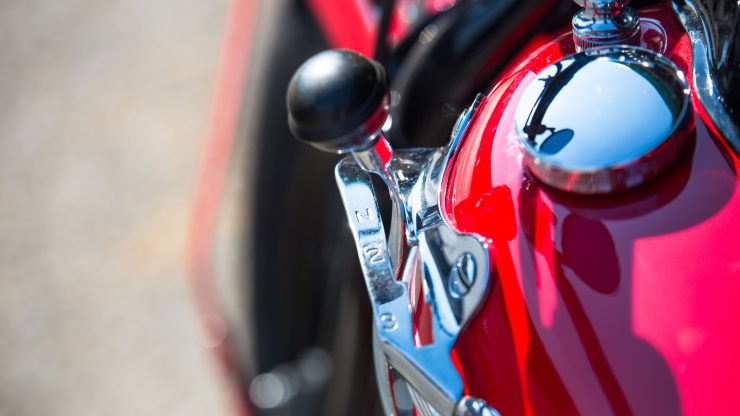 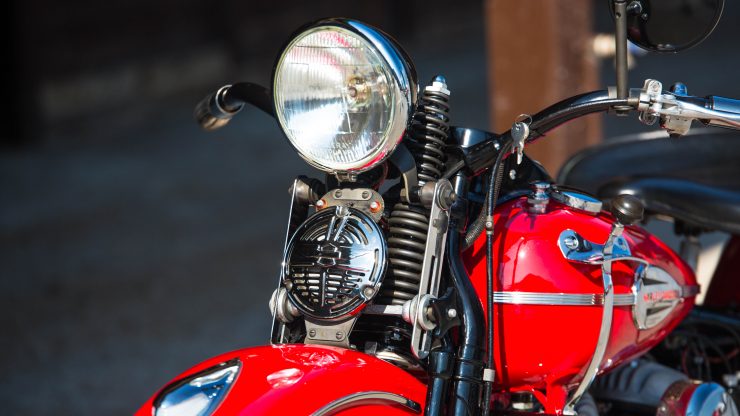 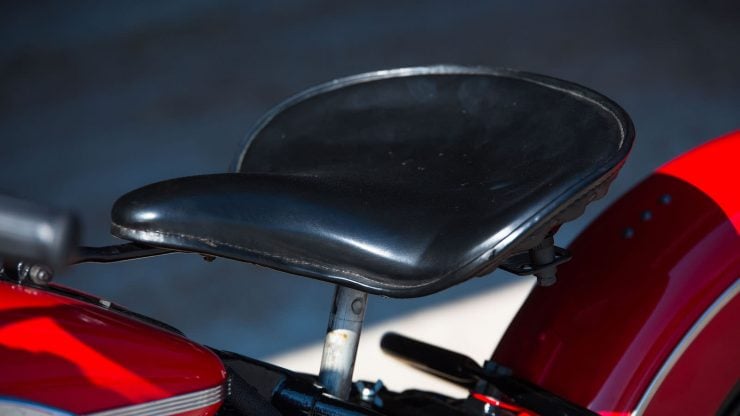 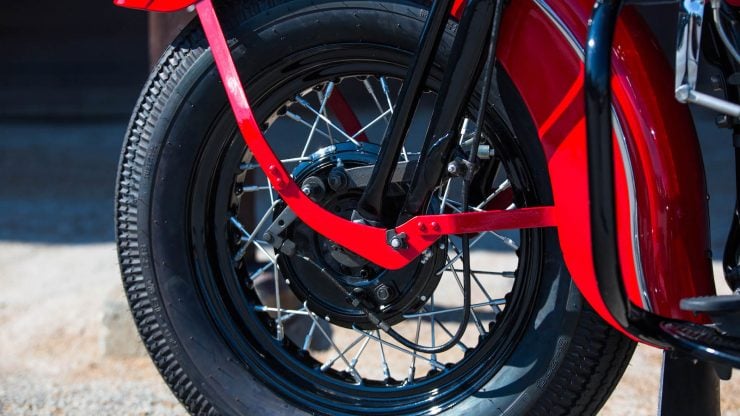 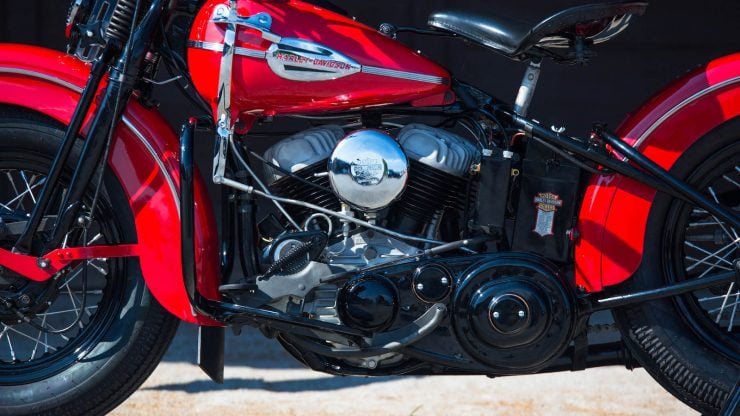 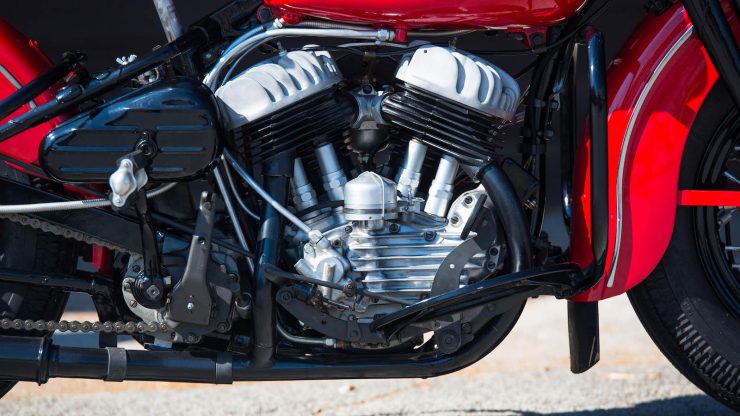 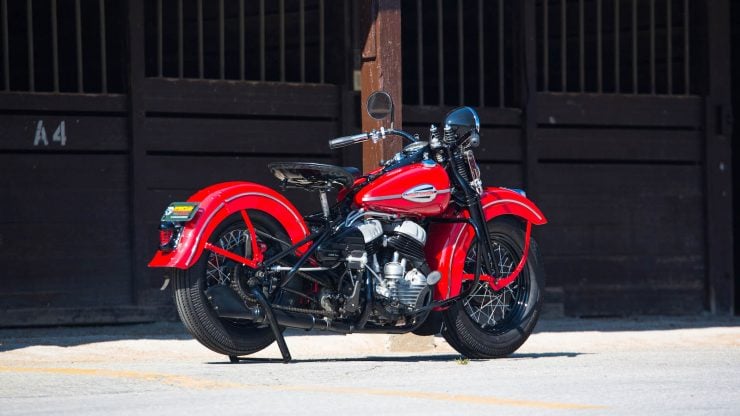 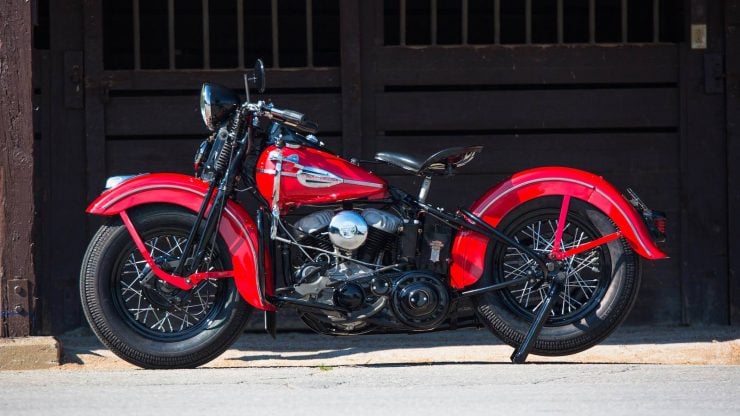 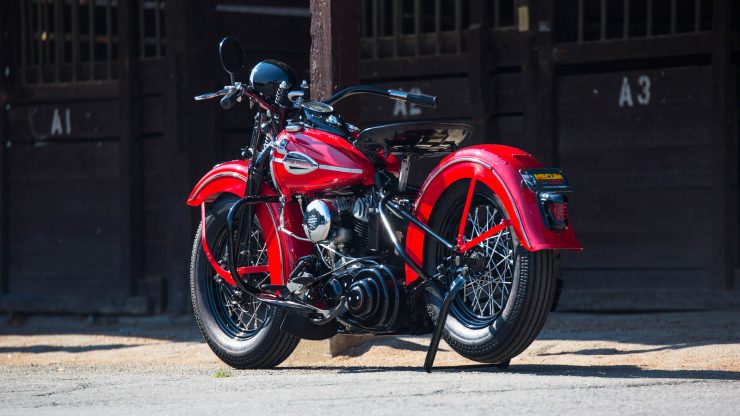 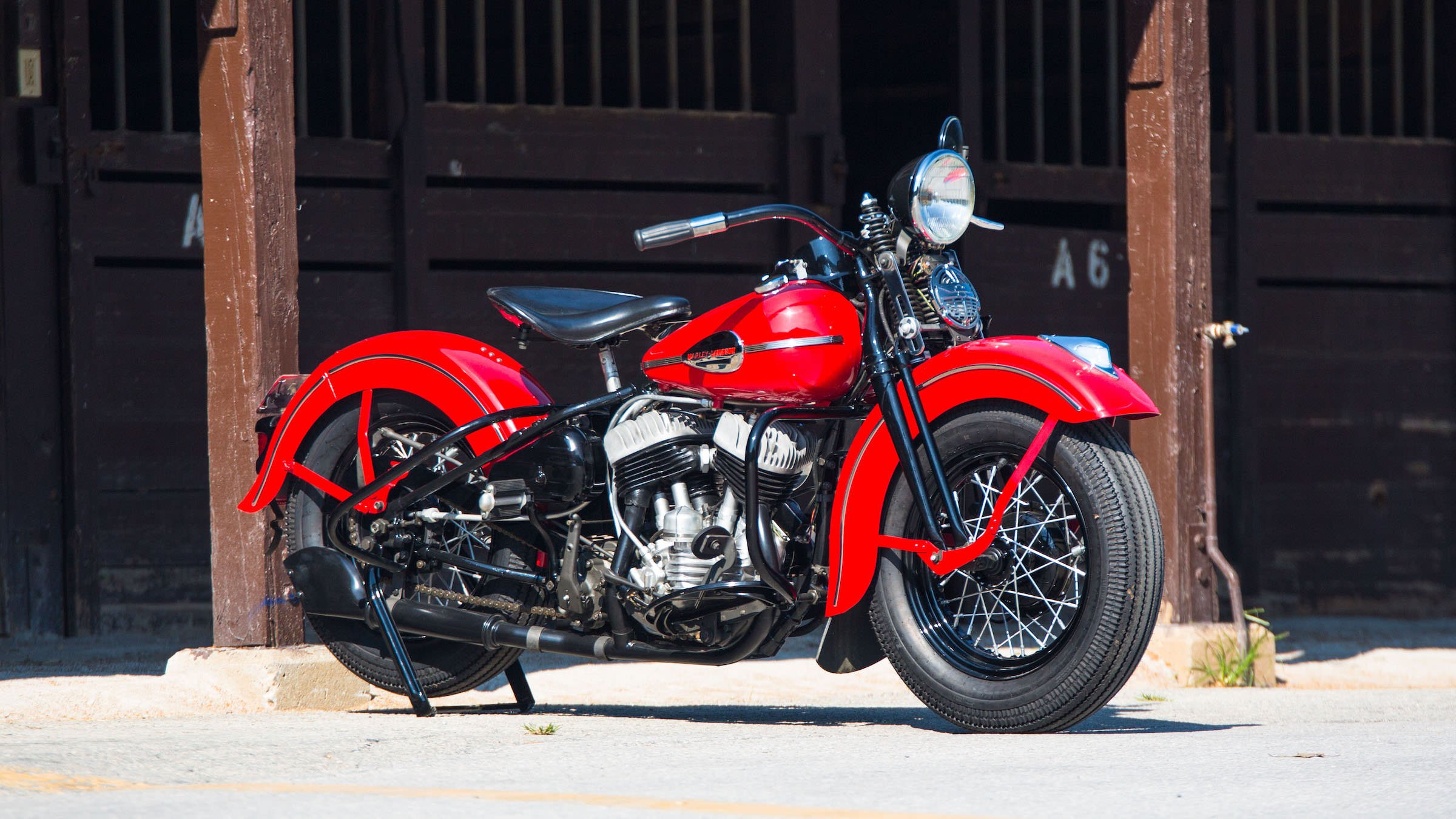