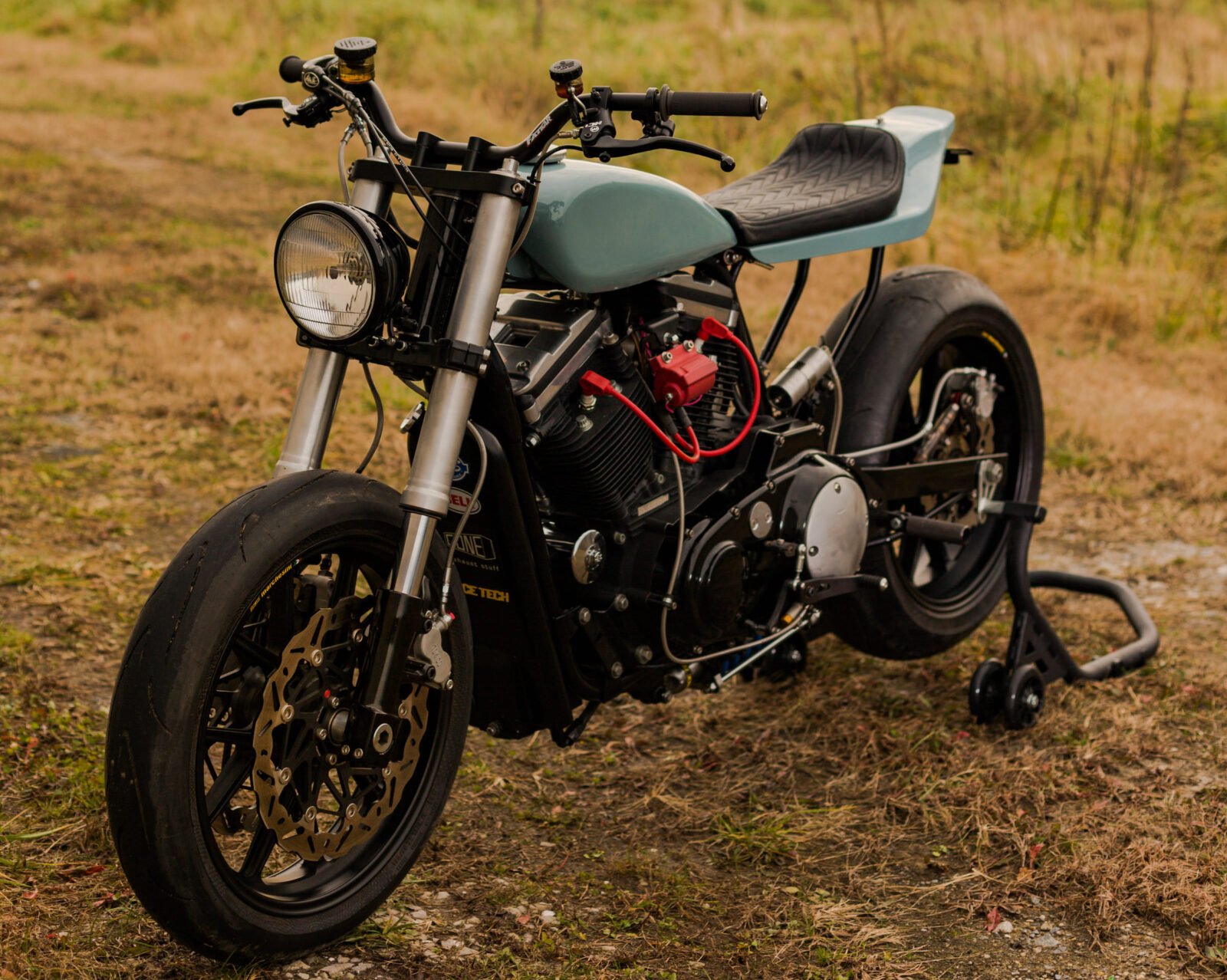 This is probably the most interesting street tracker we’ve ever featured. If you’re skeptical take a closer look at that front and rear suspension. The bike started out humbly with a 1200cc V-twin literally stolen from his wife’s Sportster and am old frame gifted to Kevin from a close friend.

Thankfully his wife now has a new engine, and she’s talking to Kevin again after some much deserved silent treatment.

The Harley-Davidson Sportster is a motorcycle that was always destined to be turned into a street tracker, the fact that the company haven’t released a half-decent factory street tracker of their own is a bewildering oversight that’s doubtless cost them significant potential sales.

After saying that I’m guaranteed to get angry emails from XR1200 owners, but in my opinion after riding a couple of them – they’re good bikes in their own way but they’re not really street trackers. I’ve always felt that street trackers should be lightweight, raucous, chuckable, and borderline illegal. Kind of like a road-registered XR750 with blinkers. 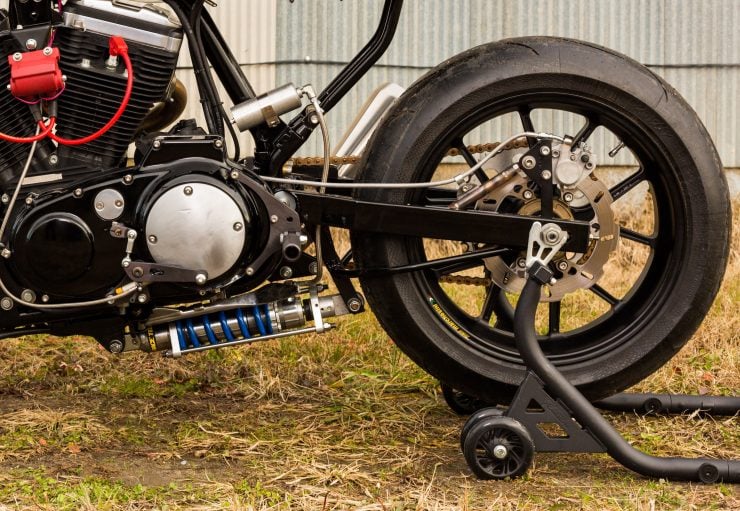 Kevin has become a significant figure in both the American and global custom motorcycle scenes. From an engineering perspective he’s created some of the most fascinating builds in recent memory, including an aerospace alloy plate-framed custom Triumph.

Kevin’s builds have appeared in many of the world’s foremost motorcycle magazines and websites – including Silodrome. He’s made multiple appearances on television with Esquire Network’s “Wrench Against the Machine” and Discovery Channel’s “Naked Speed”.

Kevin was formerly the founder of Loaded Gun Customs, but he decided to shutdown LGC and shift his attention to his own new enterprise – Dunworth_ 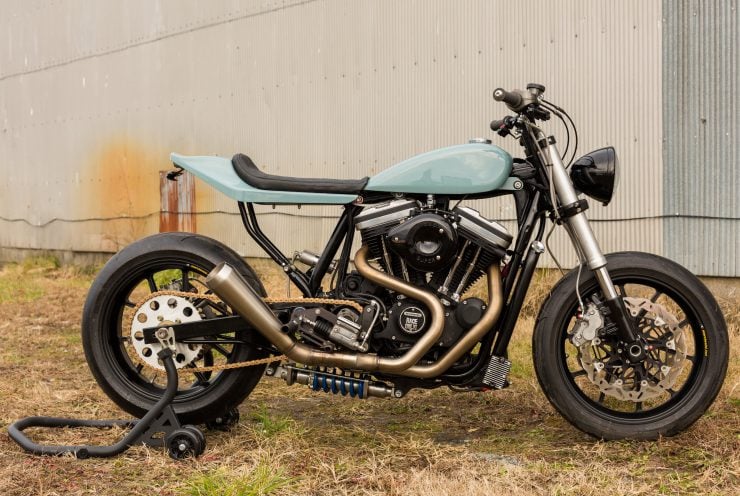 Instead of writing the story of this build out myself I’m now going to turn it over to Kevin to explain it in his own words:

I’m Kevin Dunworth. I live and breathe motorcycles and cars, though I’m mainly known for motorcycles. This was a bike I wanted to build to prove the Sportster platform was just plain fun. I had a rather dramatic injury recently and I’ve been going through some rehab as well as multiple surgeries. I had to close my previous business and was floundering a bit mentally with many things.

I had a candid conversation about going to The Handbuilt Show 2018 yet had not been able to really do anything since the previous November due to my accident. A friend and brother-from-another-mother “Lubo” from the Slovak Republic basically called and said in his uniquely accented english “stop feeling sorry for yourself, I be over in couple weeks we working” I knew he wasn’t kidding. We’d worked together multiple times over the years on contracts together and he was a machine – a few years ago I literally shut the power off to the building pretending it was a power outage, after about 50 hours of non-stop working to get him to sleep.

I was figured it was time to build this bike. 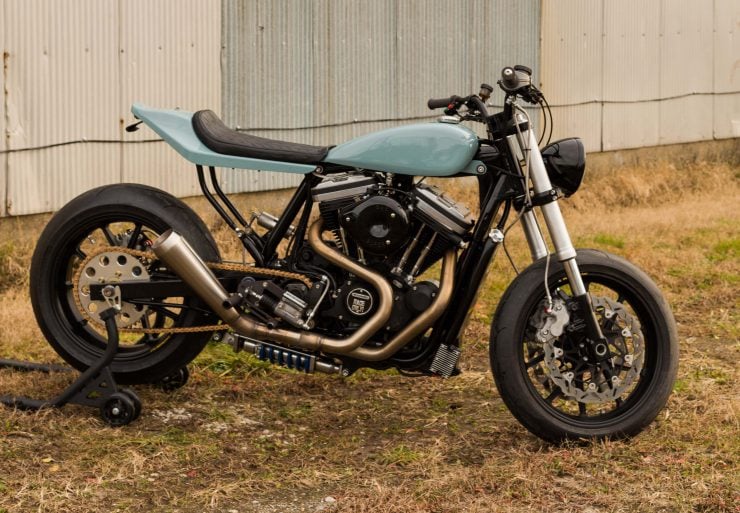 I spoke with a friend a S&S Engines next and mentioned my idea and the goal to debut at the Handbuilt Show 2018. He hooked me up with a guy named Kevin Boarts, Kevin is an engine genius at S&S, we immediately hit it off – he knew what I was looking for in a high revving, high compression, high horsepower, and barely streetable engine.

I then had to break the news to KC, my helper in the shop, that his days of hanging out with his feet up “watching the shop” would be coming to an abrupt end. KC has worked with both Lubo and I on and off for 12 years, and the anxiety of me and Lubo alone with a deadline showed immediately in his eyes. He’s like a surgeon’s assistant and utterly invaluable during crunch times, he literally runs for tools and keeps the tourists that frequently visit the shop from thinking we are unsociable jerks by being kind to them and showing them around.

The goal with this build was to create a Hot Rod motorcycle. Something that could go to a track day, do a back road run, go drag racing for fun, and sit at a bike night and wow people who know what they are looking at (many “biker” types just see a Sportster as a “girls bike”) I love Singer Porche.

I love Richard Pollock from Mule Motorcycles builds. I knew from a late 90’s Cycle World cover of a bike Richard built with a balsa wood tail section that had the profile I wanted. I wanted brakes and wheels to attract a performance guy or racer. Sadly the bike never made the Handbuilt Show – but it went on to be part of the Bell Power Sports Eliminator Helmet campaign with a catalog shoot, and it debuted at The Galveston Bike Week Show with an invite from Cycle Source magazine to compete in the In Motion Show.

I had a Kawasaki ZX7R front end and resprung it using Race Tech parts, I took the stock lower triple and removed the neck tube. Using 1” cro-moly tubing I machined a simple adapter and pressed it back in. I had a top triple clamp that would allow 11/8” Renthal bars to be installed. This allowed me to cut the stem to length and use stock Harley tapered bearings from All Balls. Using the offset of the triple trees and OD of wheels I did the math for proper trail. I came up with compromise of 24.5 degree head tube angle to get me about 102mm of trail. I then basically tilt the frame forward to achieve this.

I then (directly behind engine mounts) cut the back half of the frame off. I removed the tubing at the top tube and painstakingly welded and sanded so that it would look like a perfect single tube. We then took a piece of mild steel tubing and tapped both ends 3/8th-16 at 2” long. Drilling through the top tube a couple inches behind the rear tank mount I inserted and welded this mount for the rear sub frame.

From bar stock I machined some inserts for the lower tubes and welded some pre made tabs I received from TC Brothers. The Saddlemen Fiberglass tail came with a metal seat hoop. I removed their end caps and machined inserts to except heim joints at the front. We reinforced the back and made it straight and welded prefabbed 3/8th tabs to the back. Then using a tube bender we took ¾” tubing and bent slight angle to follow what would have been factory angles to finish struts. These use prefabbed tube ends 5/16” and solid connectors. 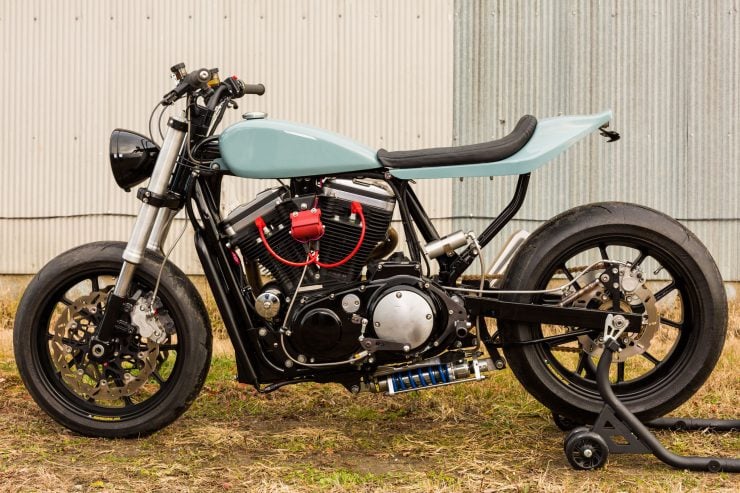 To the oil tank mounted in the front which is an idea I first saw done by MobTown Cycles out of Dundalk, MD. Tim Snead taught me a bunch of little tricks and this is one I have used a bunch, my version is to use pre-bent exhaust tubing. A U-bend. I cut the pipe in half laterally and make 2 sheets to fit using the outside of the pipe.

This gives me a rounded 1 ¾” thick tank once welded in. Using weld in -6AN male fittings allows me to use AN fittings for my oil lines. A race car coolant cap weld-in kit is used for the oil filler off to the right side. Using two bungs welded and braced I drill out the stock frame existing tabs and mount it in front of the front down tubes.

It also houses a battery box in the bottom for a lithium-ion battery, this particular version allows for 2.5 quarts of oil in the system, and being steel and mounted to the front I think helps in cooling.

We made a drop pan between the seat frame rails for a motogadget m-unit. I also made a rear tail light set-up using two of the Kim Boyle (from Boyle Custom) moto rear tail lights. With motogadget I run these as run, brake and blinkers. I made a cro-moly rear swing arm using 65 wall square tubing, and ran a tube frame Buell underslung reverse-pull shock absorber.

It was tricky getting shock right and after a lot of math the team at Race Tech re-sprung it, extended the remote reservoir, and re-valved a works shock I had laying around. I used pre-bent header tubes from Cone Engineering. Then I stepped up the diameter at determined length (Rich at Cone is another genius) and used a 2-into-1 collector to 2.5”. We then used a Big Mouth Muffler 2.5” inlet from Cone, all stainless of course. 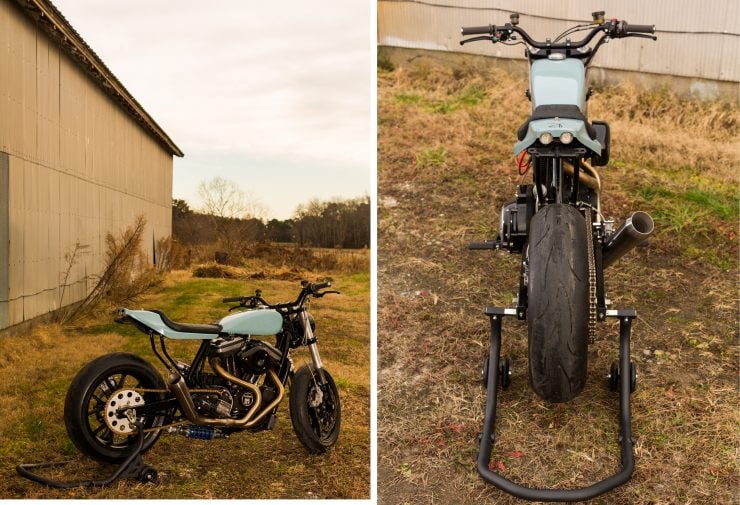 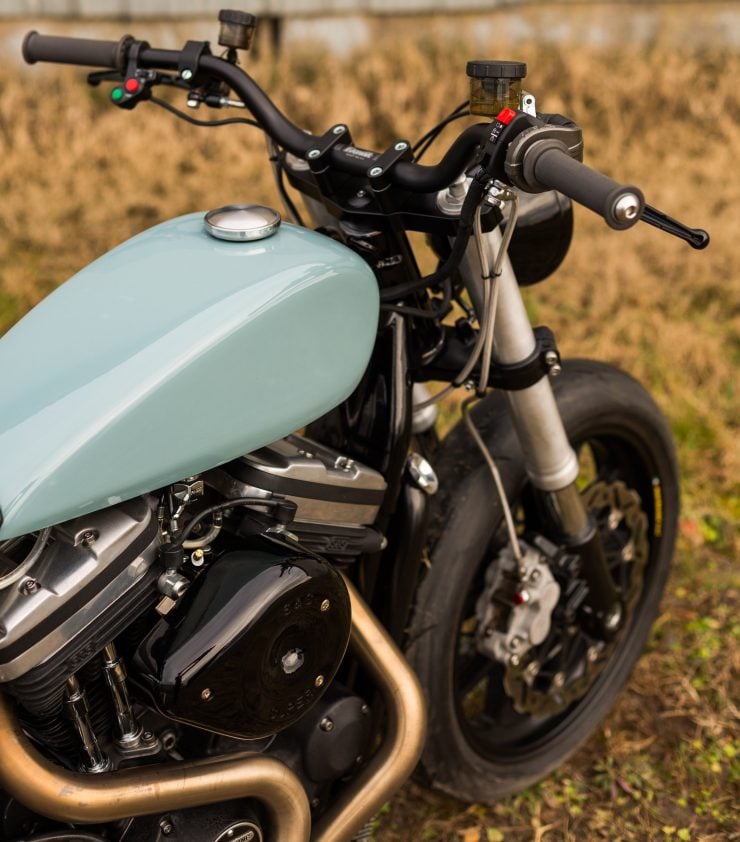 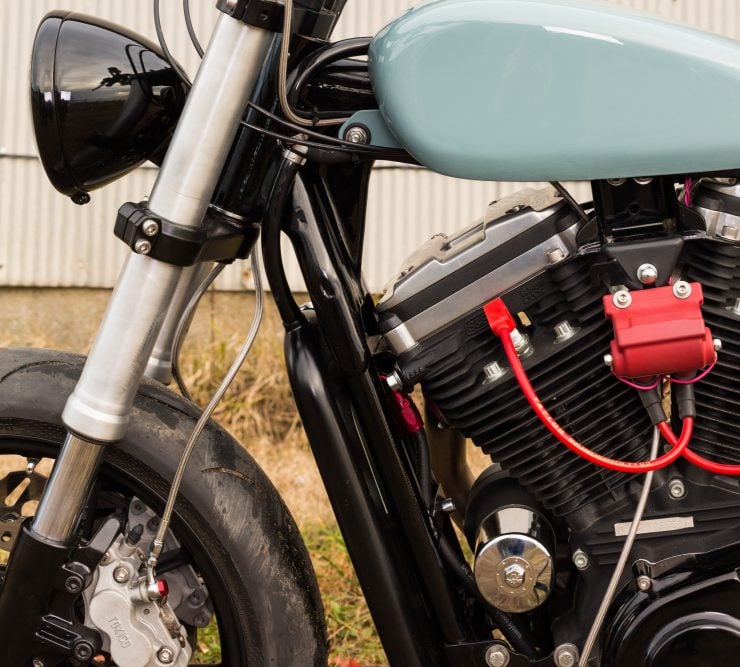 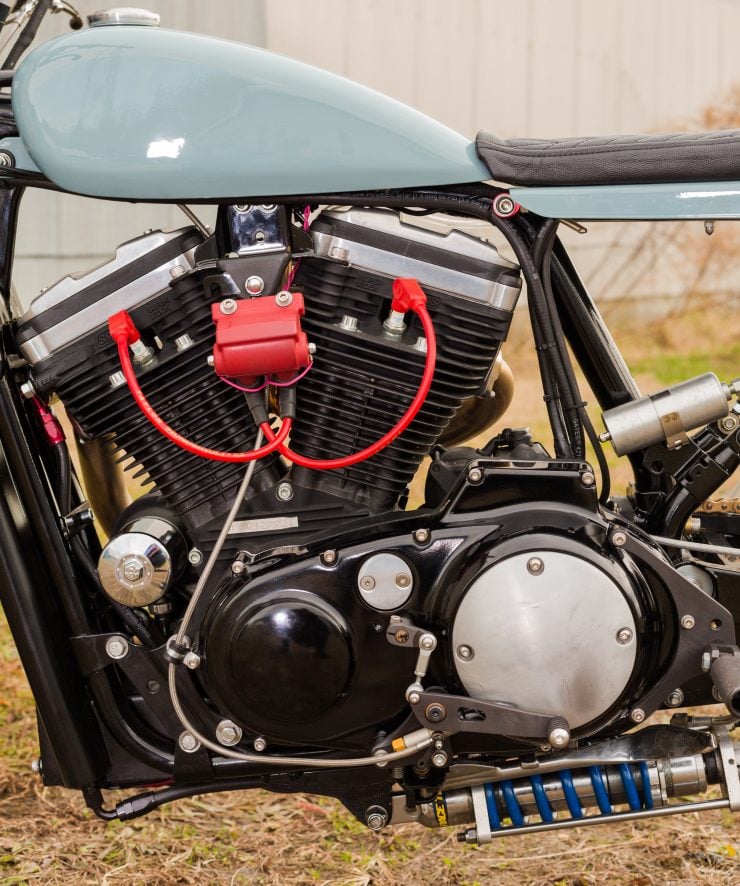 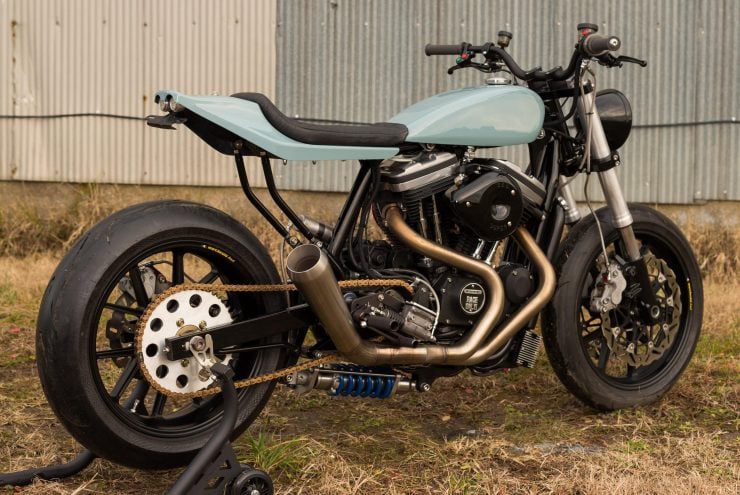 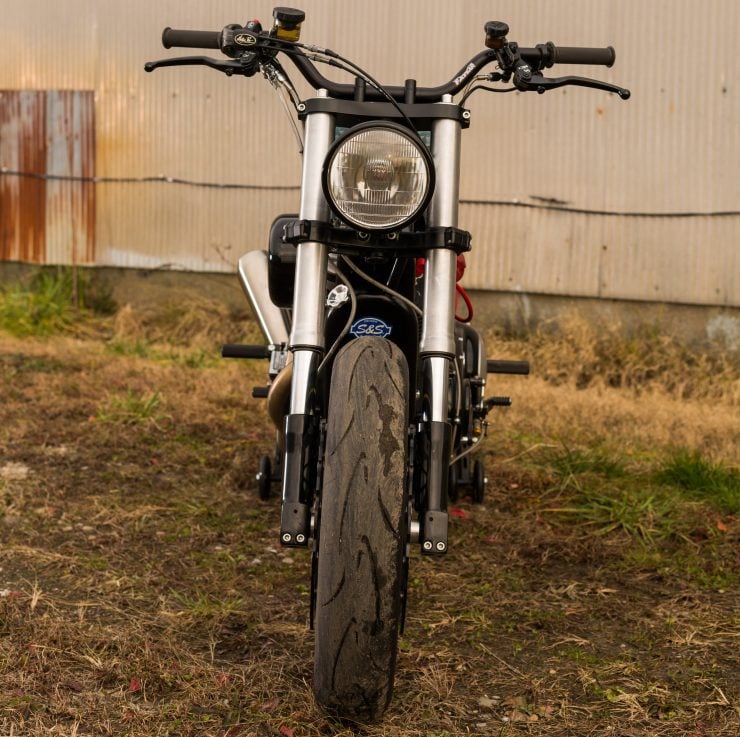 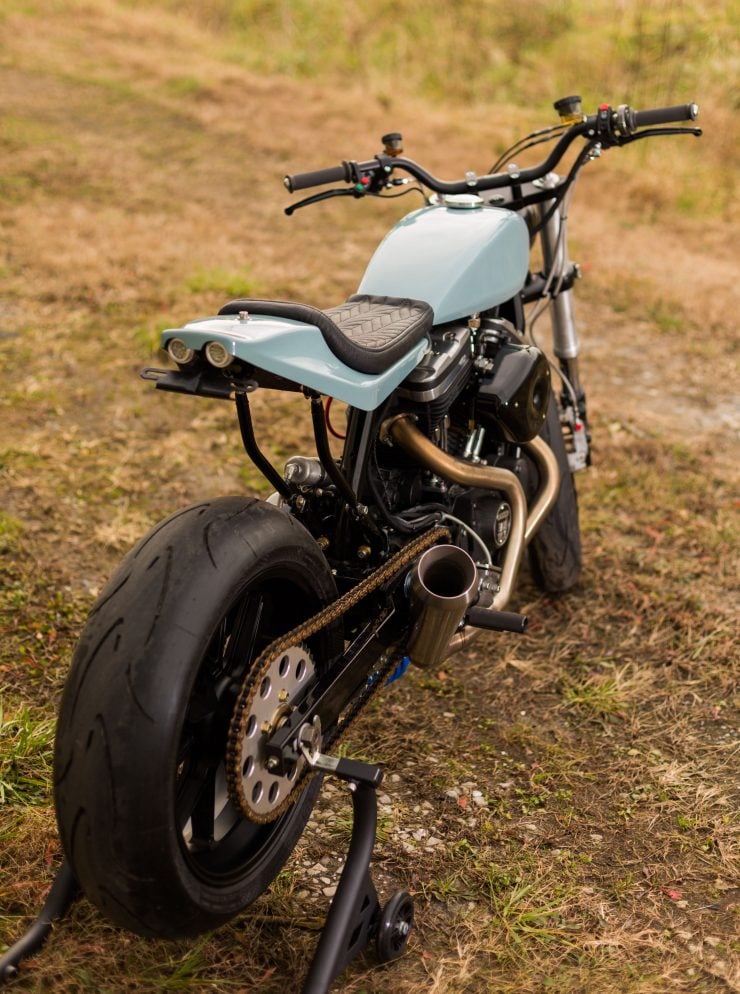 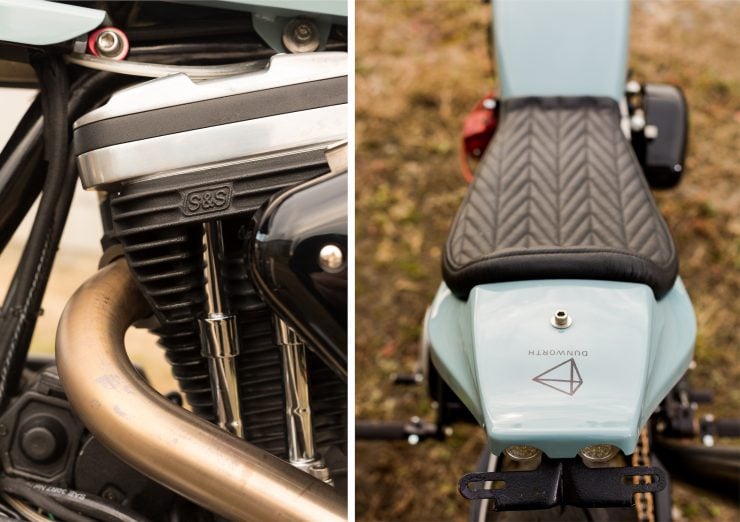 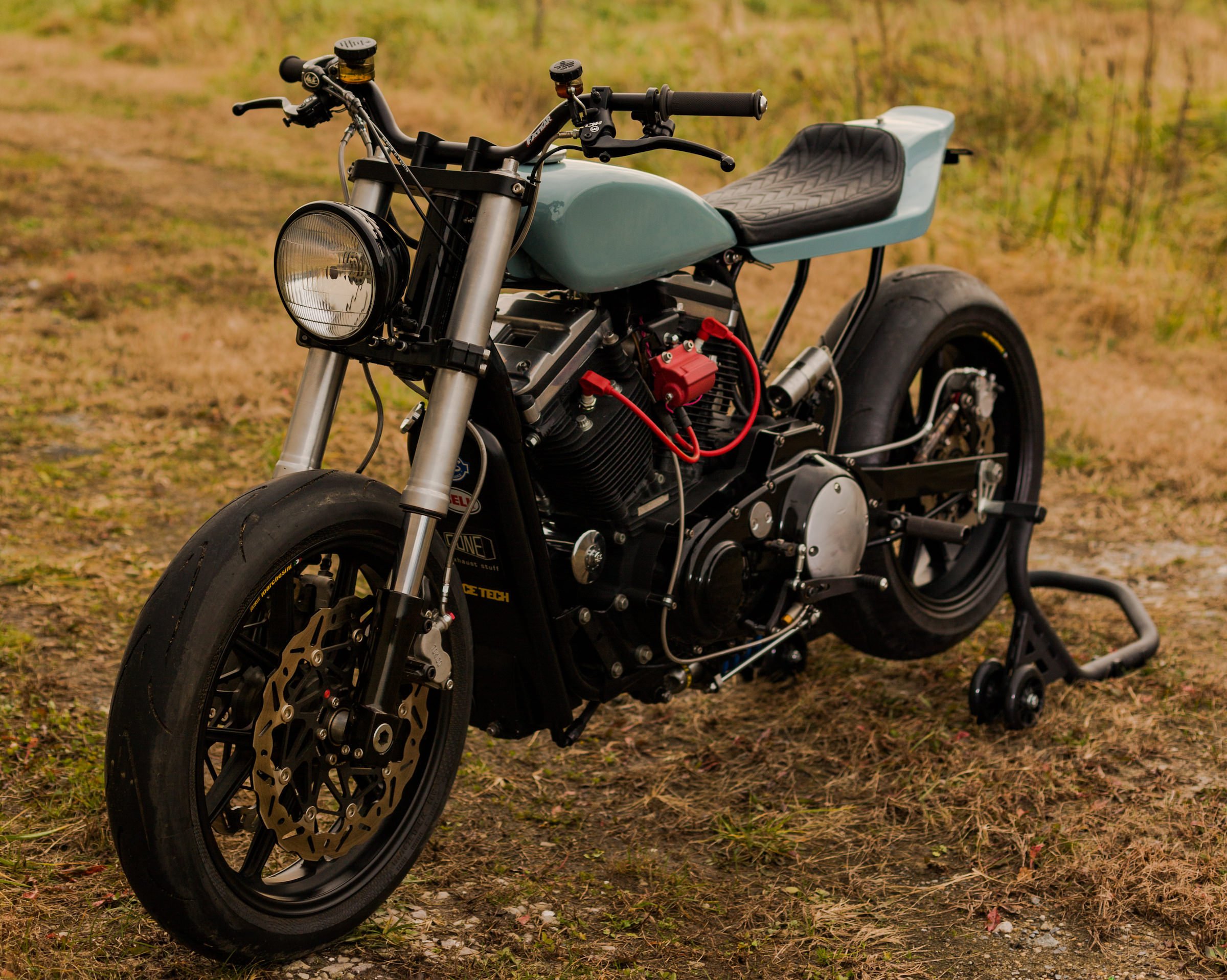