The Fuji Go Devil mini scooter was marketed as a suitcase motorcycle that you could theoretically fold up and take with you on a plane, then unfold after your flight so you had instant transportation when you arrived.

With its small, reliable engine and easy operation, the Go Devil proved popular with children and adults alike. Although there are no reports of people actually taking them on planes they were often folded up, placed into their carry bags, and transported in car trunks on camping trips and other adventures.

When the Go Devil first appeared in the United States in 1964 it was met with a somewhat curious reception. Minibikes were all the rage at the time and would remain so well into the 1970s, but almost all of them had standard non-folding designs.

A series of three images that show (left to right) a Go Devil in its bag, in its folded state, and unfolded and ready to ride. These images are display purposes only, courtesy of eBay Motors.

The Go Devil was designed so that it could be ridden by children or adults, and the unfolding/folding system was simple enough to be done be either. Essentially to unfold it you would fold out the front section, screw the central brace bar into position, click the handlebars into place, insert the front wheel, and rotate the rear wheel into place. The whole process could take as little as 60 seconds to complete.

The scooter was powered by a simple 50cc two-stroke, air-cooled, single-cylinder motor with a centrifugal clutch. The rear wheel was driven by a chain and unusually for a minibike of the era, it had sprung swing arm rear suspension.

Not many Go Devils have survived sadly, they were cheap when new and not seen as particularly valuable until more recently. We do see them come up for sale every now and then, oftentimes in “barn find” condition requiring a rebuild by experienced hands.

Folding scooters and motorcycles are nothing new of course, the most famous early example is probably the British Welbike from World War II. The Welbike could be folded down and rolled into a metal tube or canister which was then parachute dropped with soldiers so they had instant transportation on the ground.

A version of the Welbike would later be modified for civilian use and sold by the Corgi Motorcycle Co Ltd, branded as the “Corgi.” A version of this scooter would be sold in the United States painted dark red and branded as the “Indian Papoose,” it’s possible that these designs provided inspiration to engineers at Fuji Industries for the development of the Go Devil.

Above Video: This short video shows a Fuji Go Devil being removed from a bag, unfolded and assembled, started, and then ridden.

Later examples of folding scooters include the famous Honda Motocompo which was introduced in 1981 and sold until 1983 to accompany the Japanese company’s compact cars, namely the Honda Today and the Honda City, which both had trunks that could accommodate a folded-down Motocompo.

The Go Devil you see here comprises two individual bikes that are due to be offered by Worldwide Auctioneers in the second week of September as two lots.

Each of these Go Devils appears largely complete with the exception of the front wheel, and it’s clear that both of them will require a restoration before they’ll be rideable. That said, these are very simple minibikes so it’s doubtful to be a particularly challenging job. 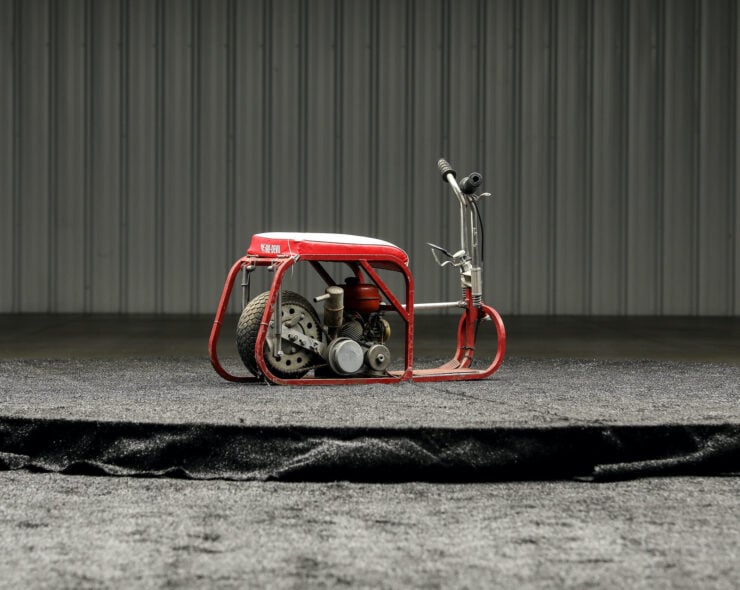 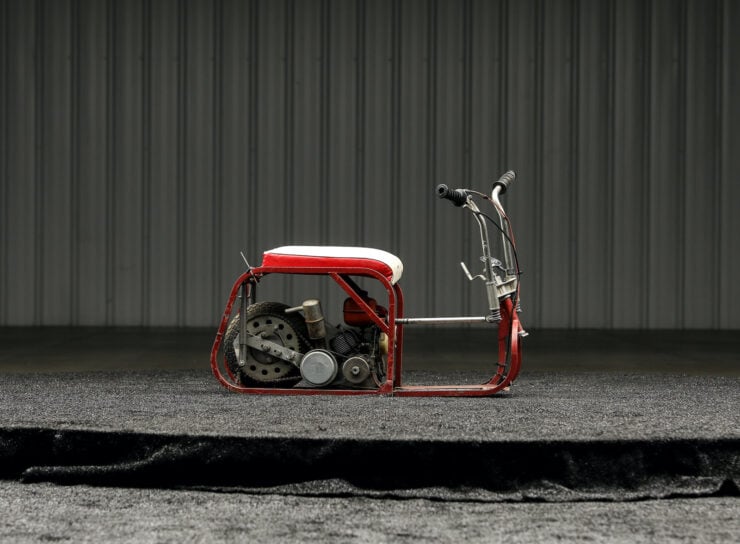 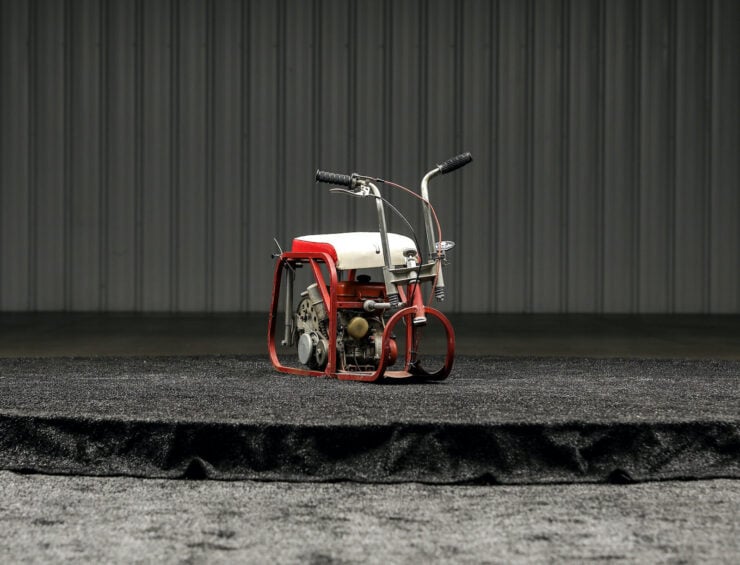 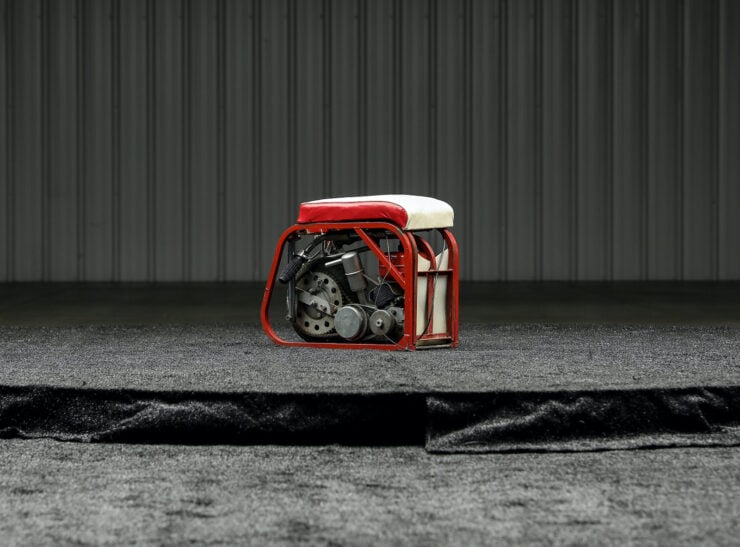 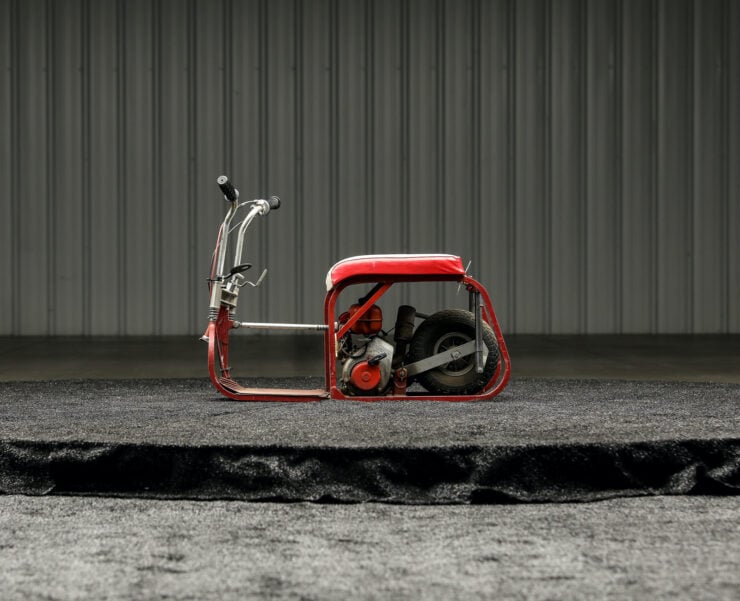 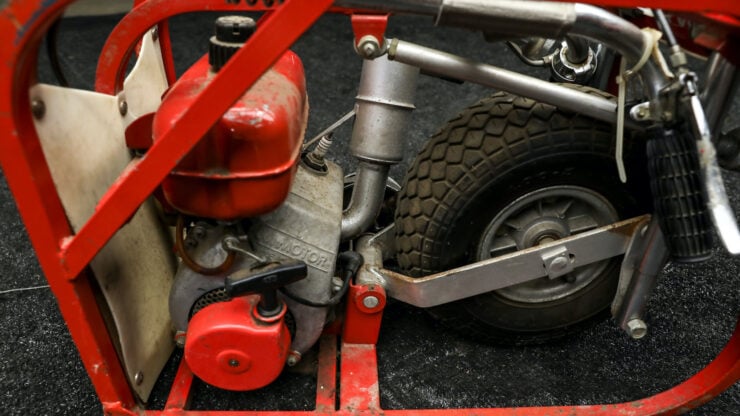 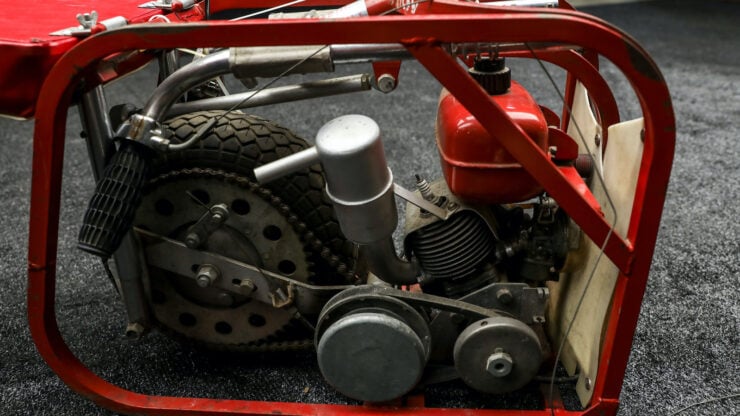 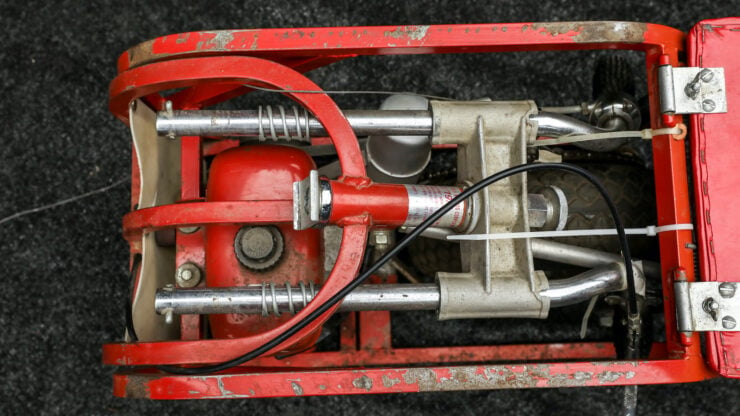 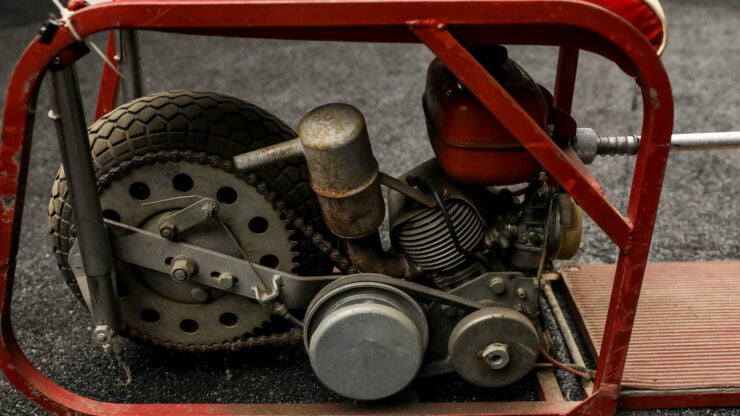 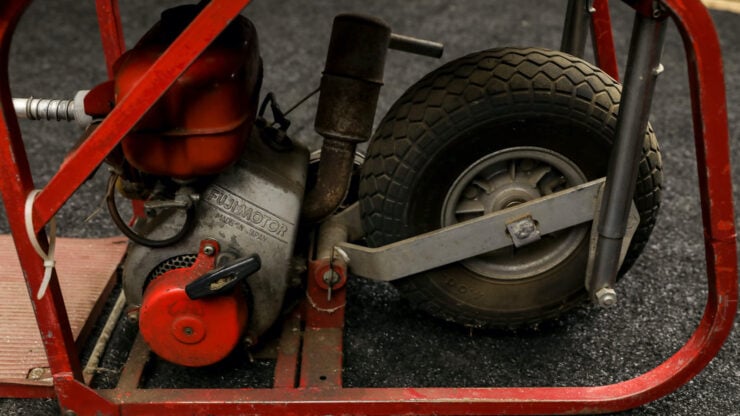 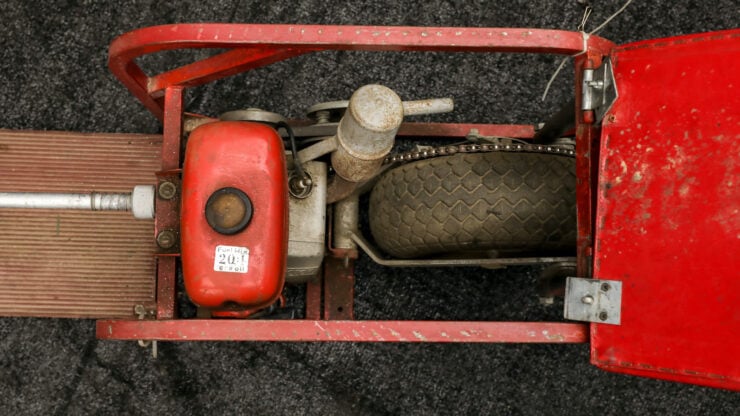 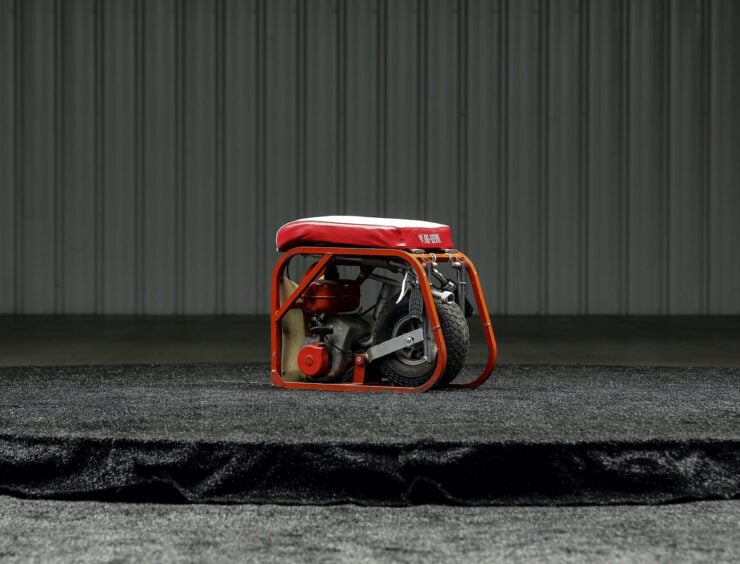 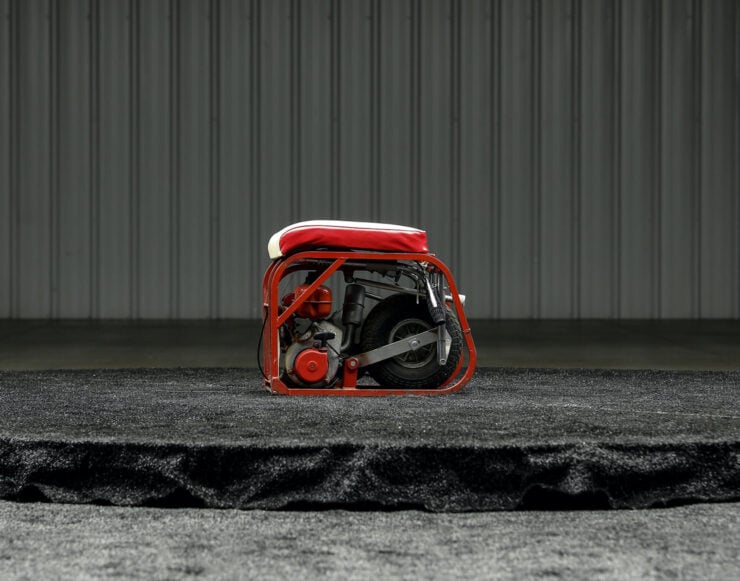 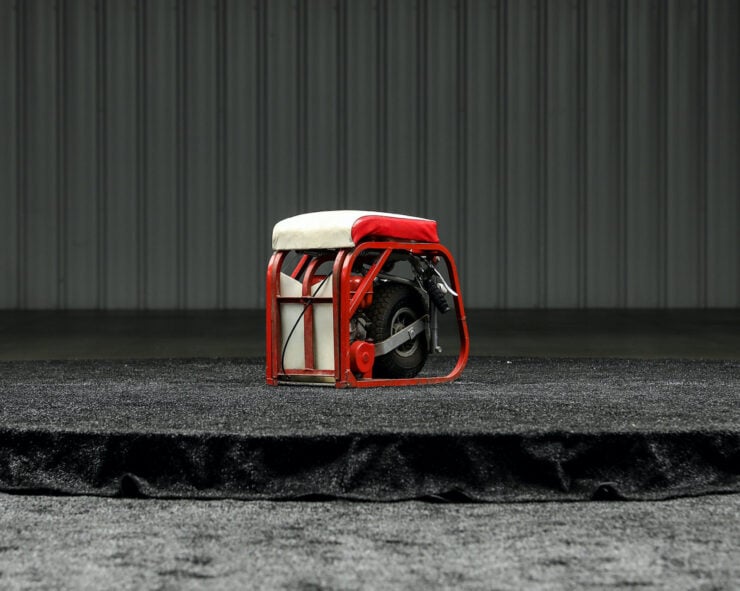 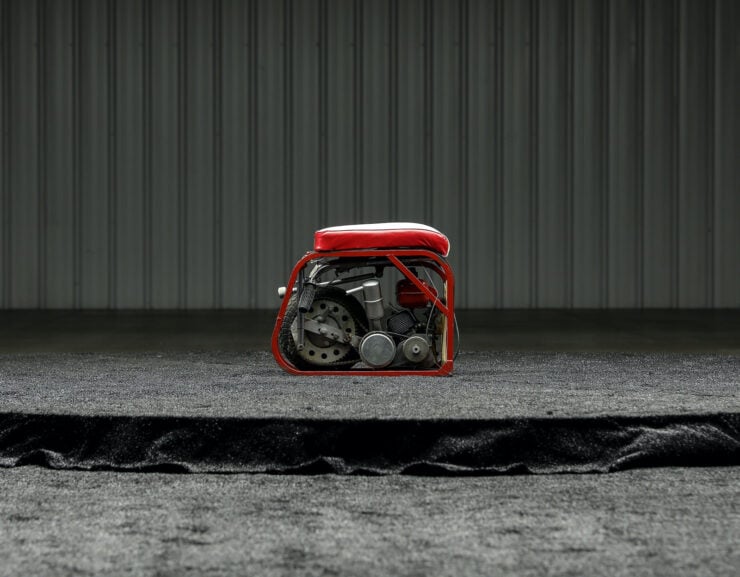 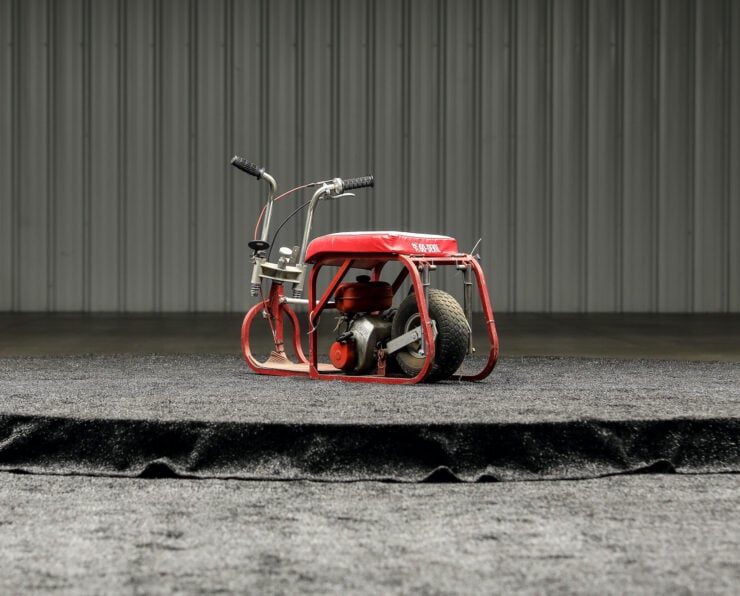 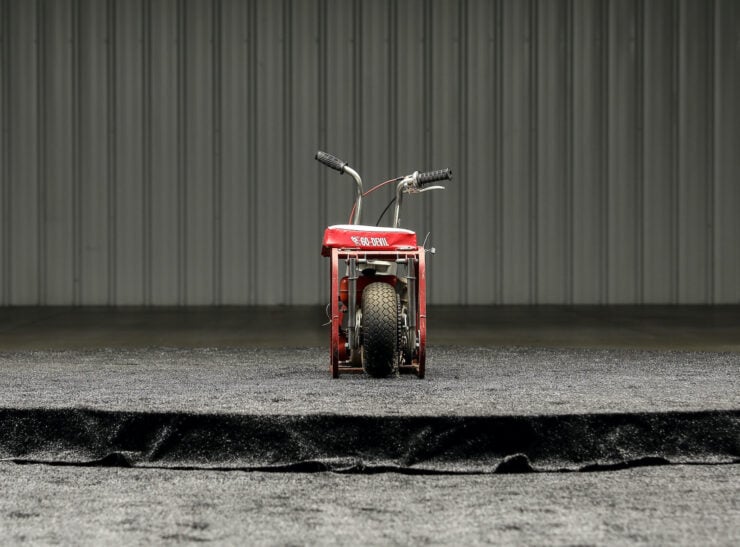 Facebook Twitter WhatsApp Email   The Droog Moto Mini Fighter is a new release from one of the custom motorcycle world’s most unusual garages….

Facebook Twitter WhatsApp Email The Indian 841 was developed by engineers at Indian specifically to fight the Nazis across the deserts of North Africa. The…

Facebook Twitter WhatsApp Email This Datsun 240Z has a remarkable history, it was bought new by a British Army Captain while on a tour…

Facebook Twitter WhatsApp Email This is the new Trevor DTRe Stella, an electric dirt tracker from Belgium that produces 260 Nm (or 192 lb…