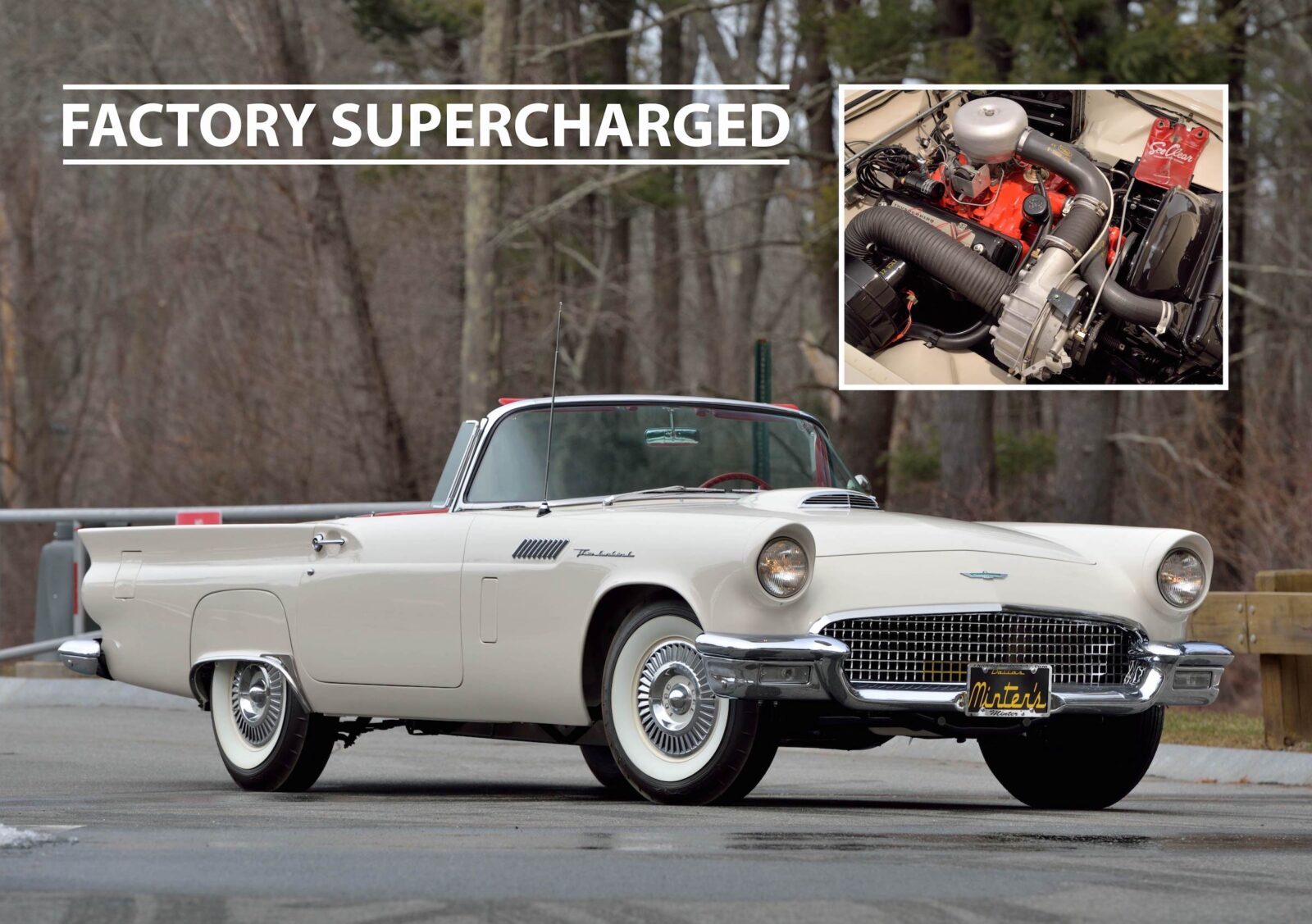 In mid-20th century American car collector circles there are few vehicles more desirable than the car you see here. It’s one of just 15 hand-built, supercharged Thunderbirds developed for NASCAR and other competition purposes under the direct authority of Ford Division General Manager Robert S. McNamara.

If you’re thinking that the name Robert S. McNamara sounds familiar, it may be because he was later tapped by President John F. Kennedy to be the Secretary of Defense in 1961 and would remain in the role until 1968.

Years before he started working in the White House, McNamara had helped revolutionize Ford in the years after WW2. When he saw the Chevrolet Corvette unveiled at the 1953 Motorama display at the New York Auto Show he knew Ford needed a competitor, and work began immediately.

Whereas the Corvette had been developed to compete with the sleek, fast sports cars coming out of Europe, the Thunderbird took a slightly different route – becoming the “personal luxury car” or essentially the American version of the European grand tourer.

This focus on luxury rather than all-out sporting ability was popular with many Americans, so much so that the new Thunderbird outsold the Corvette 23-to-1 for 1955, 16,155 Thunderbirds sold versus just 700 Corvettes.

Due in no small part to the Chevrolet fuel-injection development program McNamara set the wheels in motion to develop a special version of the Thunderbird to ensure that Ford would remain out in front.

When describing the program to the Ford Executive Committee he wrote:

“The installation on the 312 CI 4V carburetor engine of a new design McCulloch supercharger for use on the Ford car and Thunderbird … which would provide operational characteristics equal to or better than any fuel injection system at present day development. The supercharger option would carry a rating of 300 hp.” 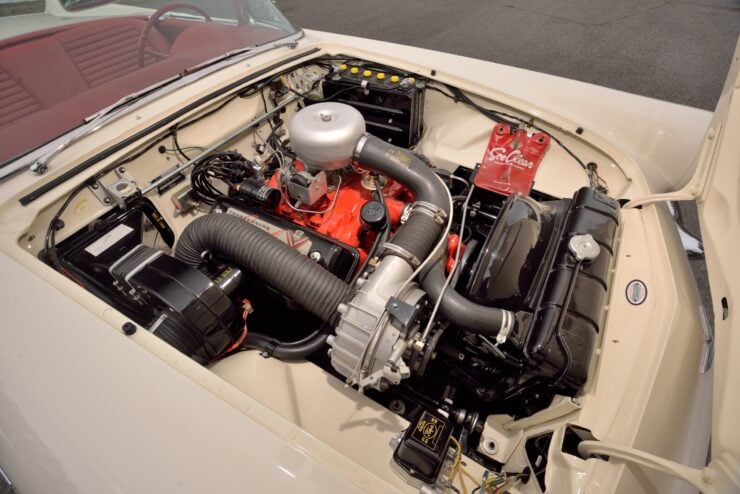 Above Image: The engine bay of the Phase One D/F Supercharged Thunderbird is dominated by that unusual side-mounted supercharger.

At this time there was no plan to build a production version of the supercharged Thunderbird, however they would eventually be built due to the success of the original 15 skunkworks cars.

Each of these high-performance prototypes was fitted with a 312 cu. in. single-carburetor V8 engine mated with a McCulloch VR57 Phase 1 supercharger. Power was sent back to the rear wheels via a race-prepared heavy-duty BorgWarner 3-speed manual transmission, the cars were all given seat belts for safety and a fiberglass hard top for better high-speed aerodynamics.

The Fastest American Made Car

Just a year earlier a specially prepared Corvette had set the new American production sports car record and it was this achievement that Ford wanted to beat – the marketing potential of having the fastest production car made in America is clear as day.

At Daytona in 1957 one of these Phase 1 Thunderbirds beat the Corvette record by 6 mph, setting a new American production sports car record with a speed of 138.755 mph. To celebrate this feat Ford built 195 examples of the 1957 Thunderbird with the F-Code Paxton-supercharged four-barrel V8, now among the most collectible Thunderbirds ever made.

Of the 15 prototypes that were built for racing and speed records just eight are known to survive, and the car you see here is one of the most original of them. This car was professionally restored by Amos Minter using original components, it retains the original factory drivetrain, and it scored a perfect 300 points at the Classic Thunderbird Club International’s National Concours in 2014.

In some respects these supercharged Thunderbirds were the last hurrah for the first generation of the model. 1958 would see the release of a new Thunderbird which was considerably bigger and heavier than the original, now with four seats instead of just two.

This decision to expand the model and widen the potential customer base to include people with children has long been controversial. On one hand the more sporting Thunderbird was no more, but on the other hand the sales of the newer car skyrocketed to 37,892 – outselling the smaller 1957 model by 16,000 units.

If you’d like to read more about this vehicle or register to bid you can click here to visit the listing on Mecum. It’s due to roll across the auction block in mid-May and there’s no reserve set. 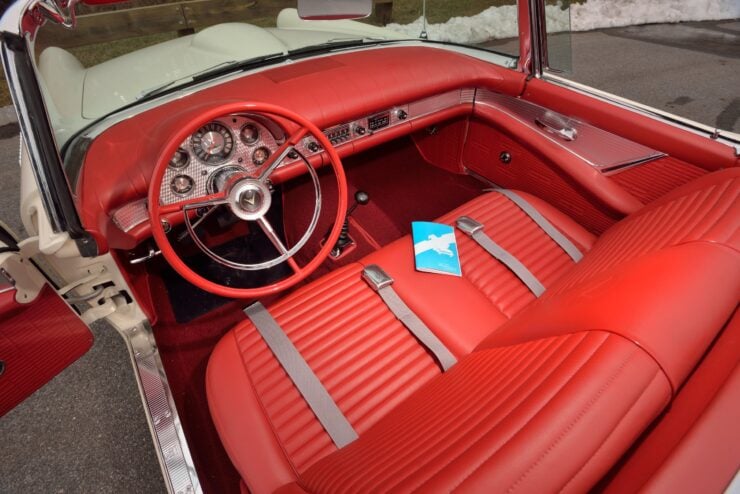 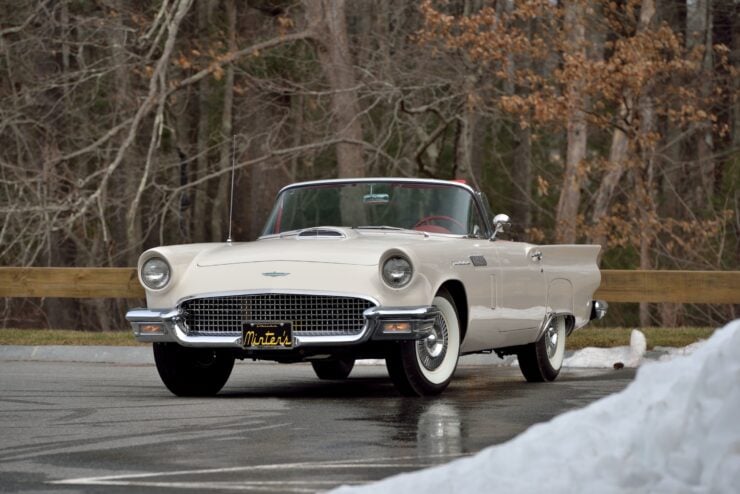 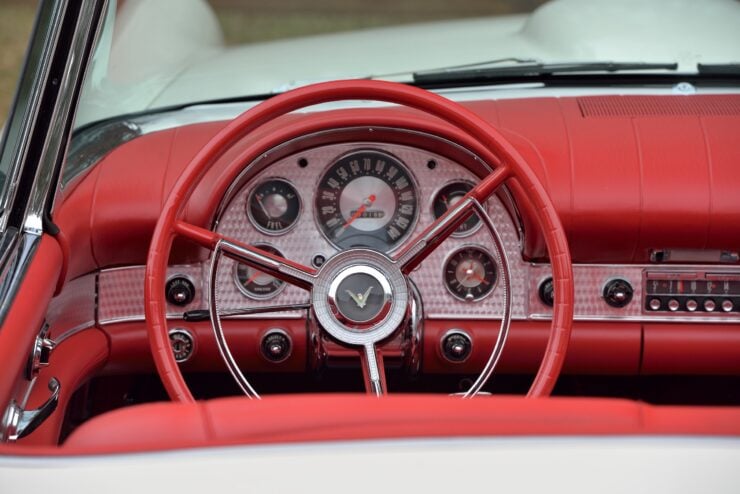 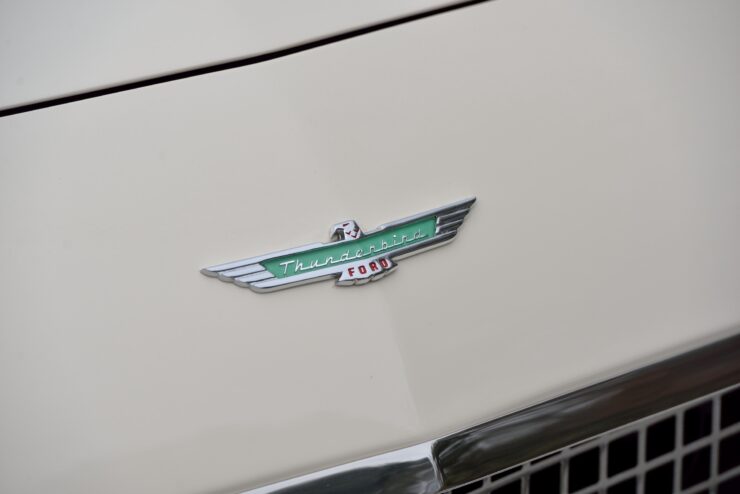 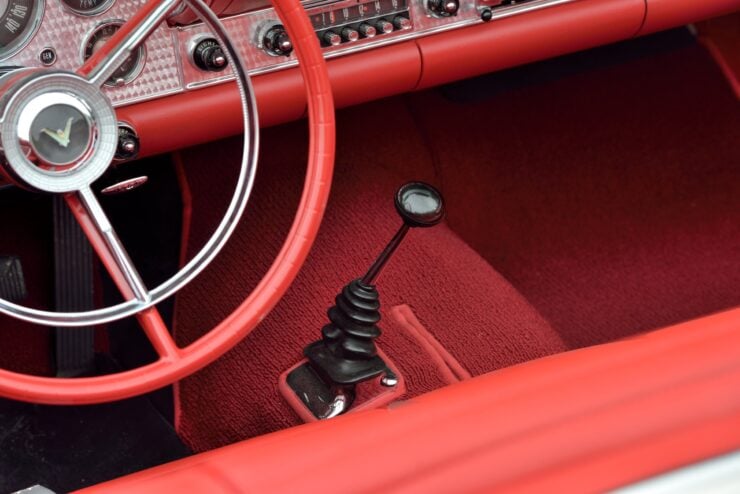 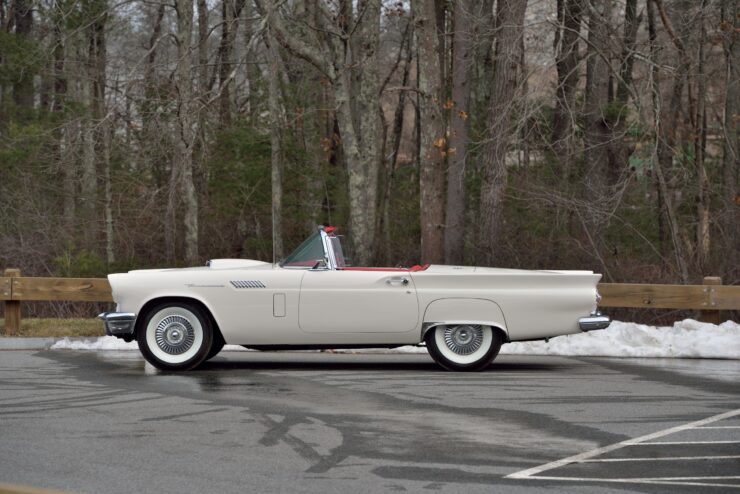 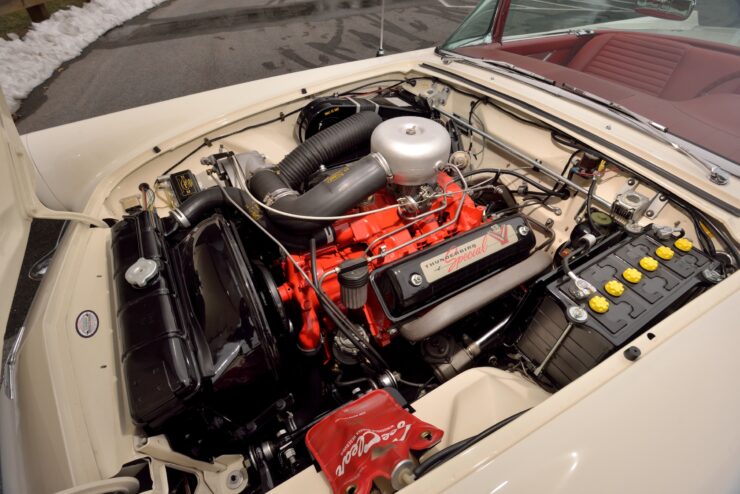 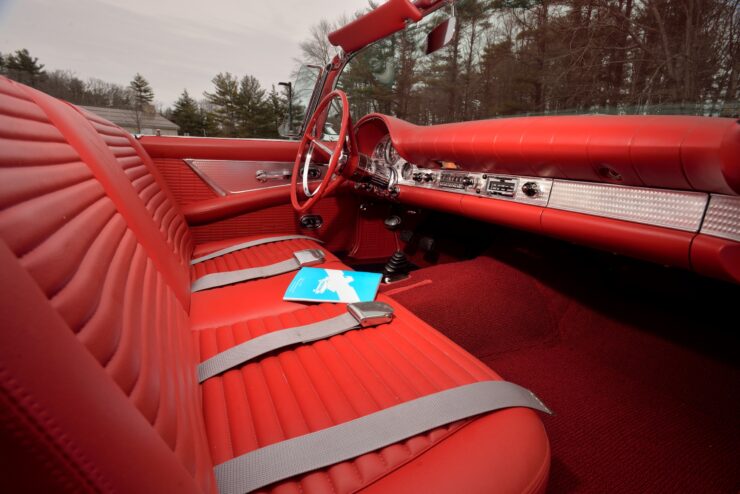 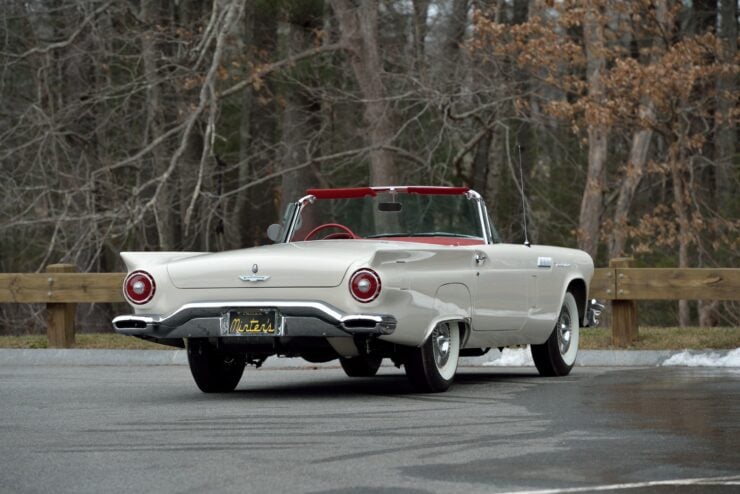 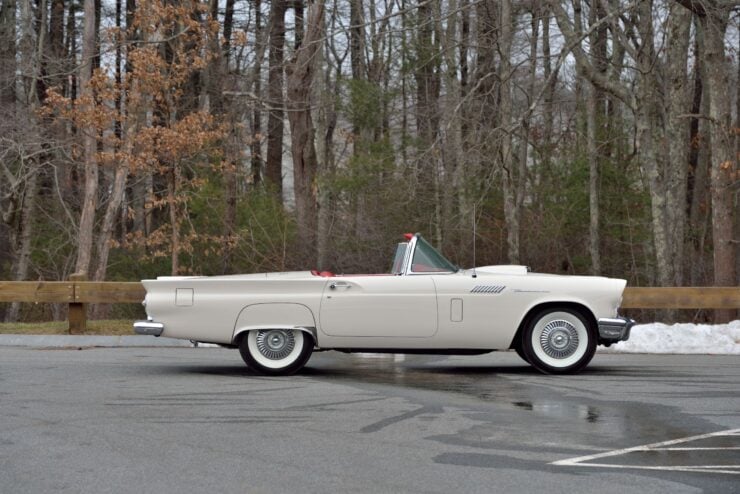 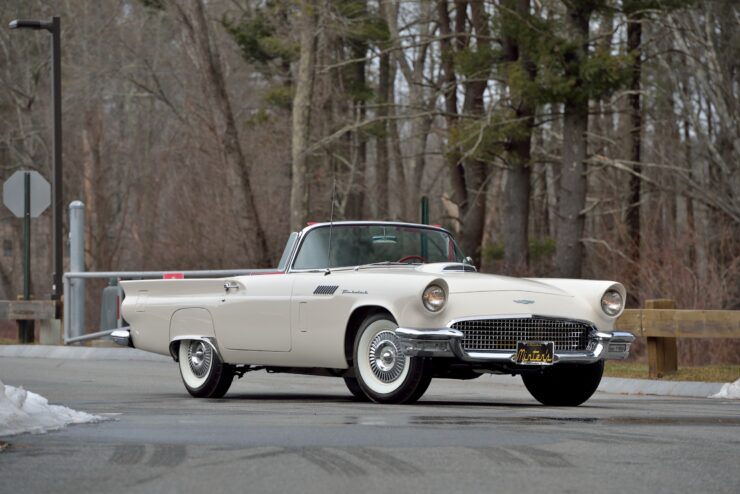