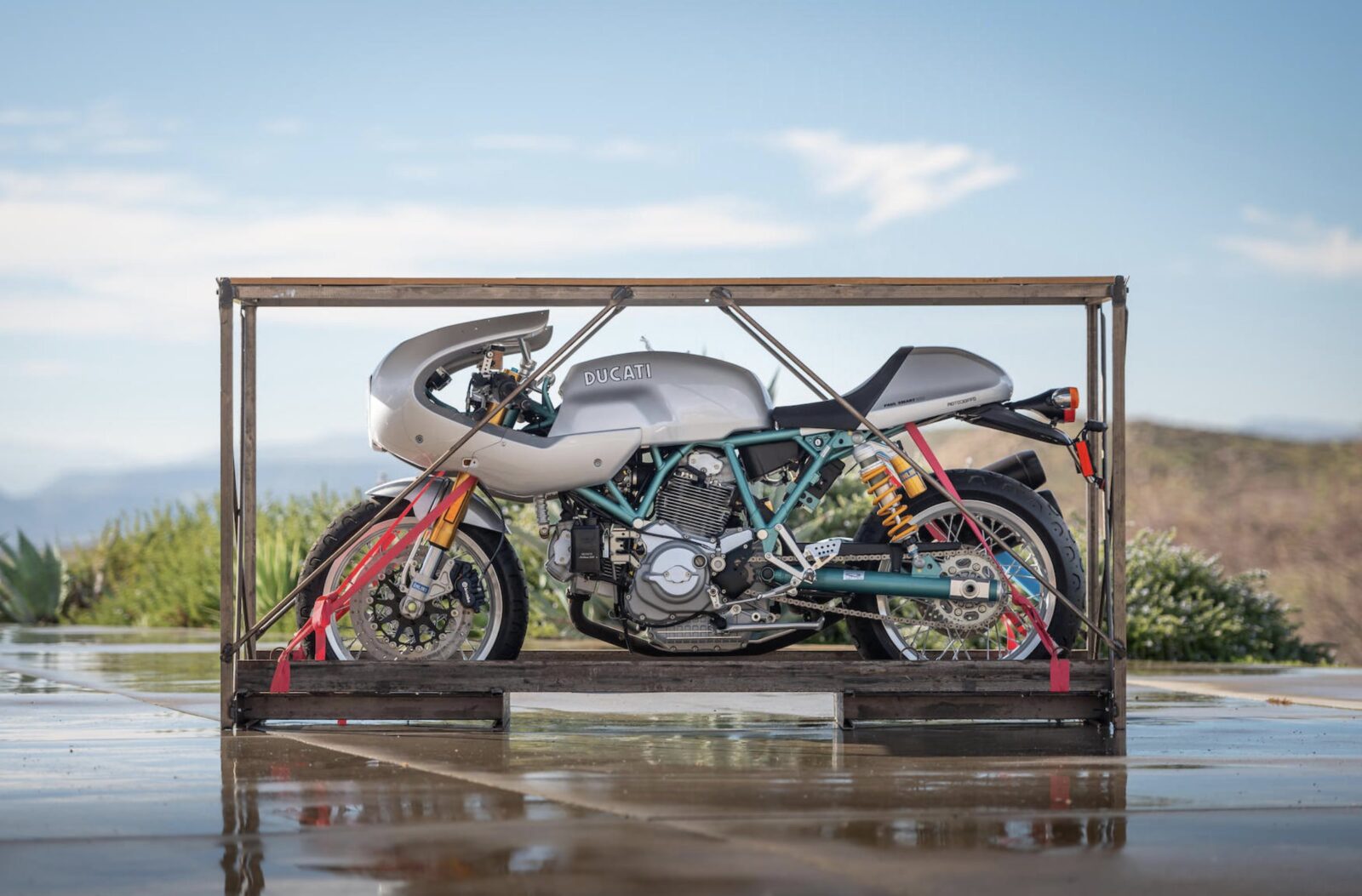 When the Ducati Paul Smart 1000 LE was released in 2006 it caused a sensation throughout the motorcycle world. It was unquestionably one of the most beautiful motorcycles of its age, and it still today stands as a high water mark when it comes to modern classic motorcycles.

Ducati built the Paul Smart 1000 LE to commemorate Paul Smart’s legendary win at the Imola 200 race in 1972. The importance of this race win is hard to overstate, it announced the arrival of Ducati as a large capacity race bike builder, and it brought much attention to the Italian company’s L-twin engine designs. 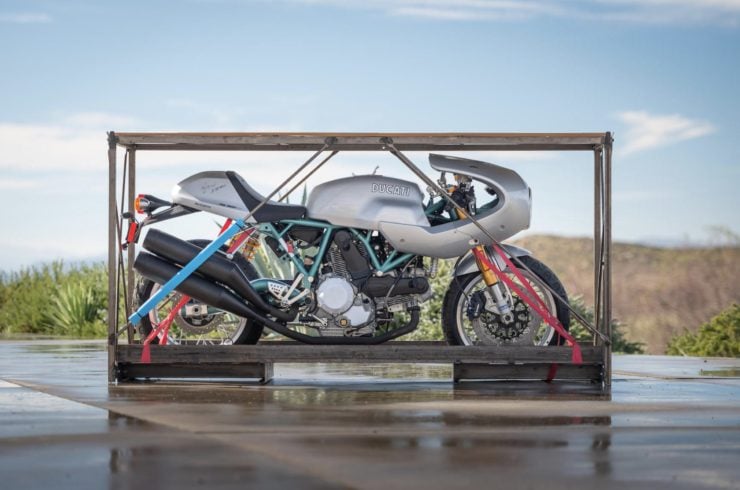 At its heart the Ducati SportClassic series, which includes the Paul Smart 1000 LE, are powered by the venerable Ducati DS1000 engine. It’s a 992cc L-twin (a 90º V-twin) with a single overhead cam per cylinder, two valves per cylinder, air and oil cooling, fuel injection, and a 6-speed gearbox. In the Paul Smart bike the DS1000 is tuned to provide 92 hp at 8,000 rpm and 67.3 ft lbs of torque at 6,000 rpm, with a wide torque band that starts relatively low in the rev range.

A tubular steel trellis frame was developed for the model that uses the engine as a stressed member to cut weight and increase rigidity. Front suspension is provided by Öhlins 43 mm upside-down fully adjustable forks and in the rear there’s an adjustable Öhlins monoshock. Braking is handled with two large twin-piston, ﬂoating caliper Brembo discs up front with a matching disc on the back.

Upon its release, the Ducati Paul Smart 1000 LE received rave reviews from all quarters. It was a motorcycle clearly designed for fun, though it performance chops left little to be desired. It wasn’t a motorcycle intended to take on the fastest superbikes in the world of course, it was developed to be a hugely fun bike to ride with a low intimidation factor and gobs of curb appeal.

The bike produces a few horsepower more than the original Paul Smart race bike from 1972, and although it does have a slight weight disadvantage it benefits from a modern chassis, modern brakes, modern suspension, and a 6-speed gearbox. There can be little doubt that the modern version would best the original on the track, although to my knowledge no one has ever put this to the test. 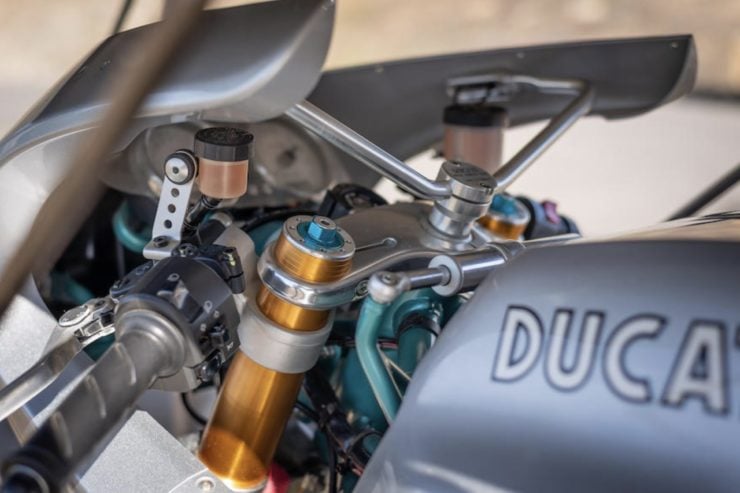 As far as we can tell, the Paul Smart 1000 LE didn’t depreciate at all, just 2,000 were made and they’re so highly sought after they seemed to maintain their sticker price or even appreciate a little. They now typically change hands for significantly more than the original MSRP, and examples in good condition don’t tend to wait long for a sale.

The Paul Smart 1000 LE you see here is one of the lowest mileage examples in the world, with 0 miles recorded due to the fact that it’s never been removed from its factory crate – and it’s never been started.

All examples of this bike featured the eye-catching aqua-green frame and silver-metalflake paint that was reminiscent of the original 1972 bike, and the paint on this one has lost none of its sparkle due to sun damage. There are three signatures on the rear cowl including those of Terblanche and Paul Smart himself. 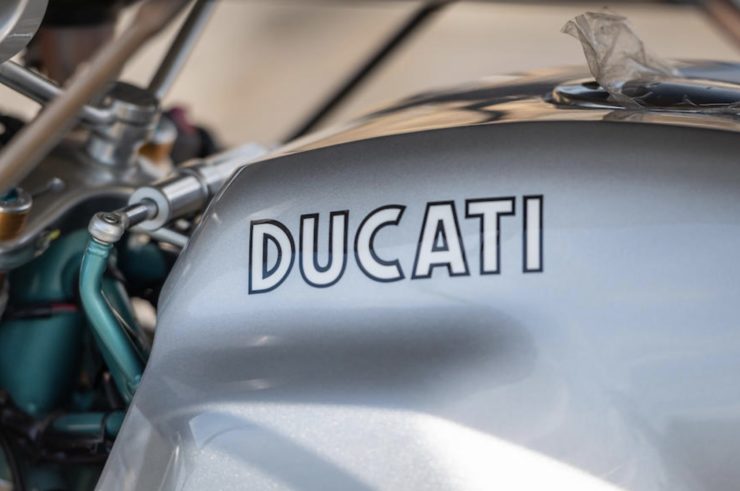 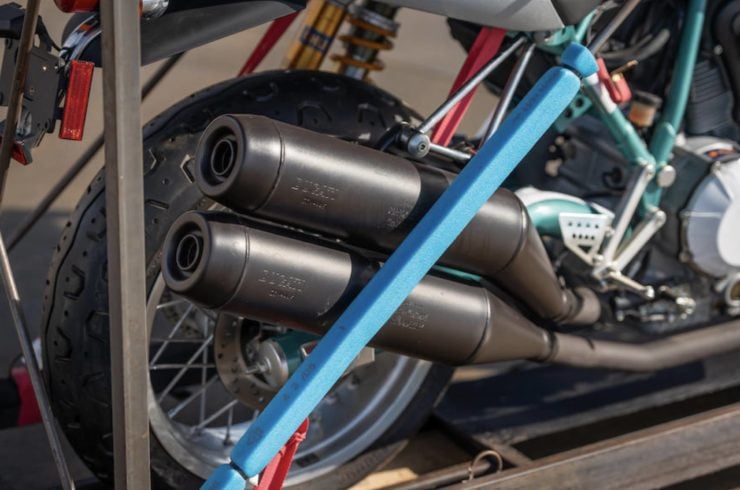 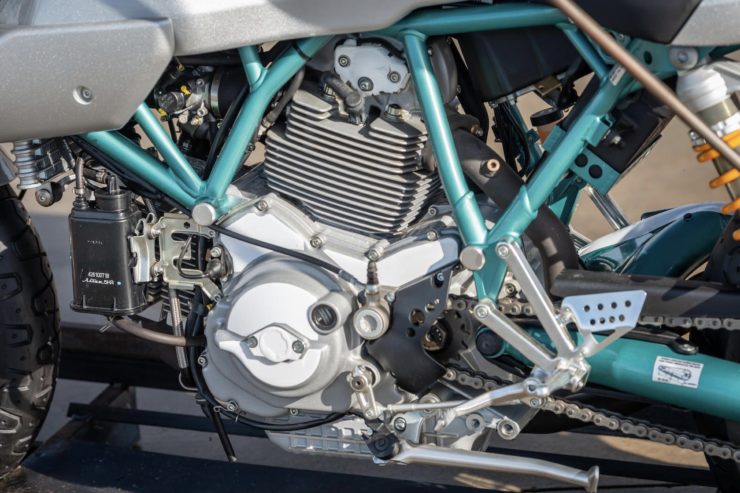 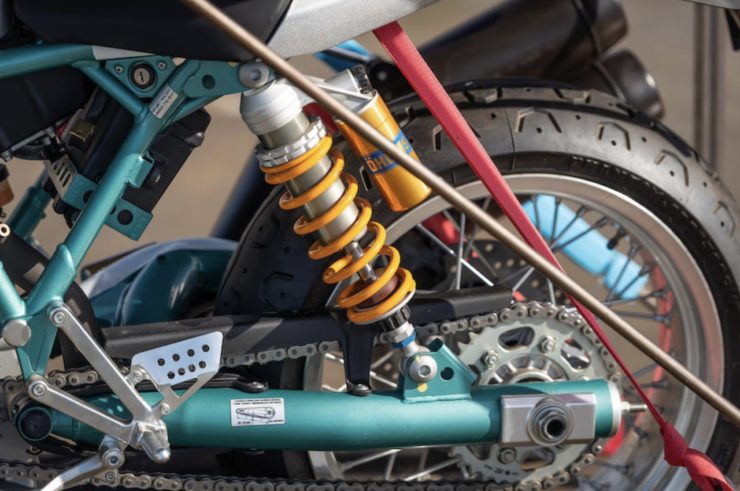 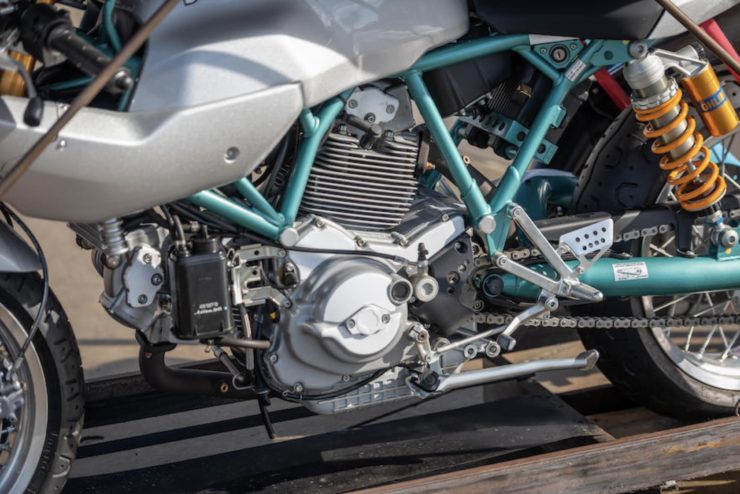 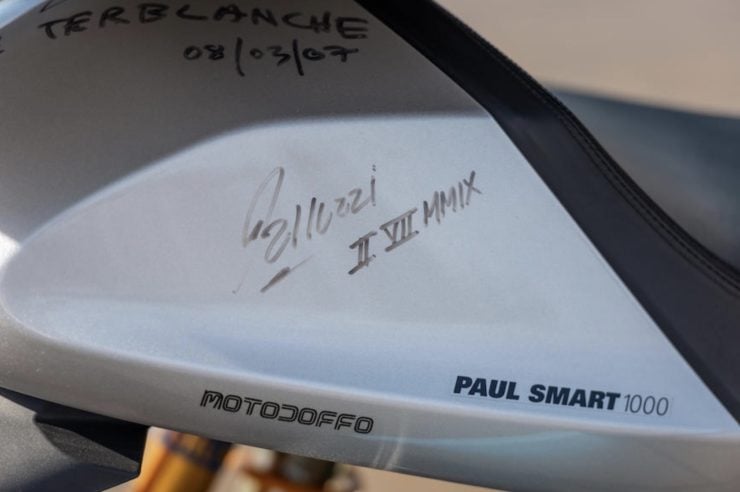 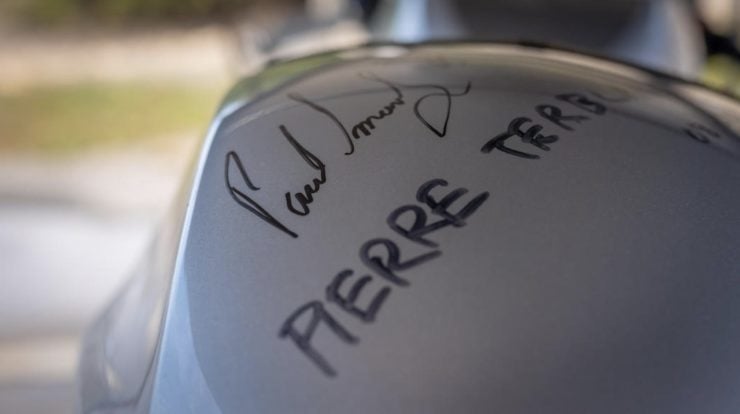 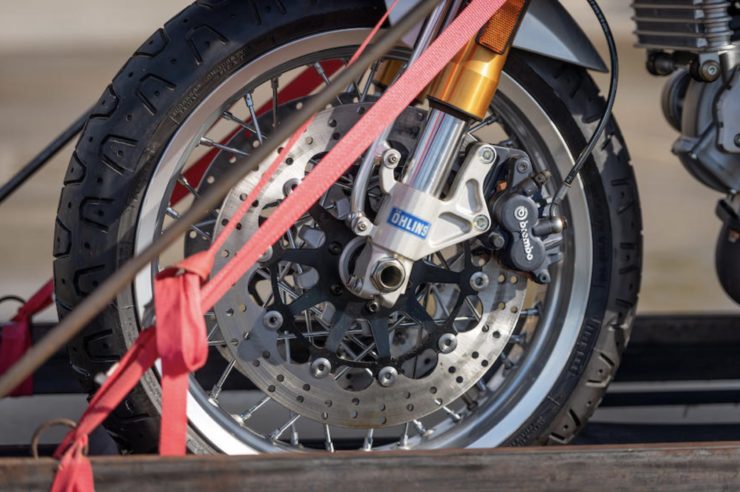 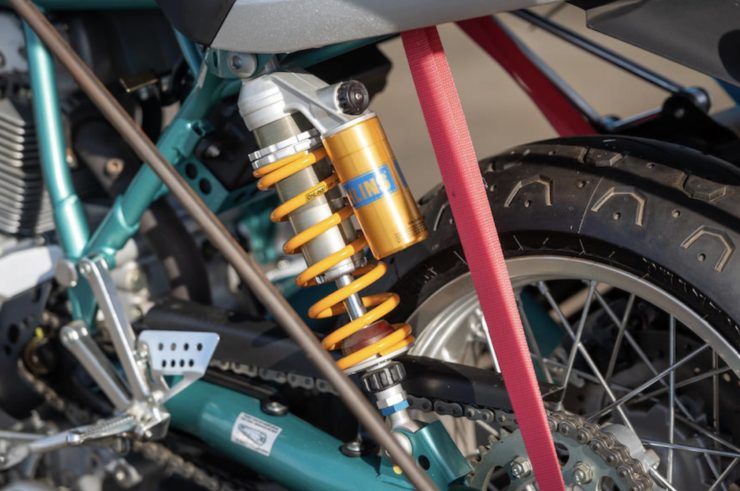 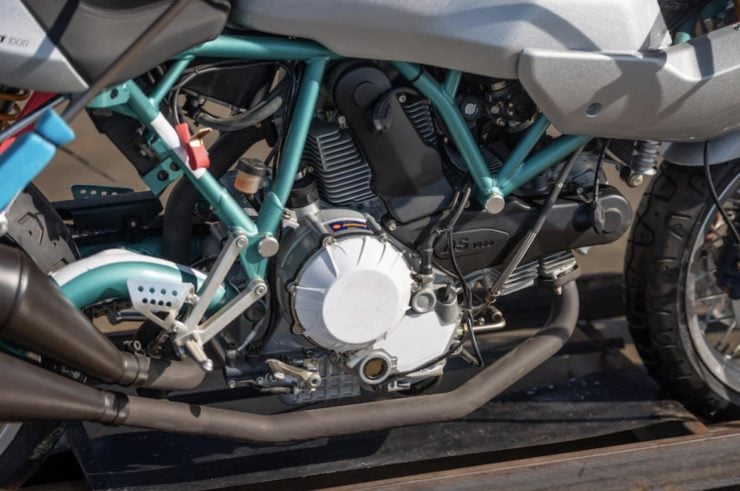 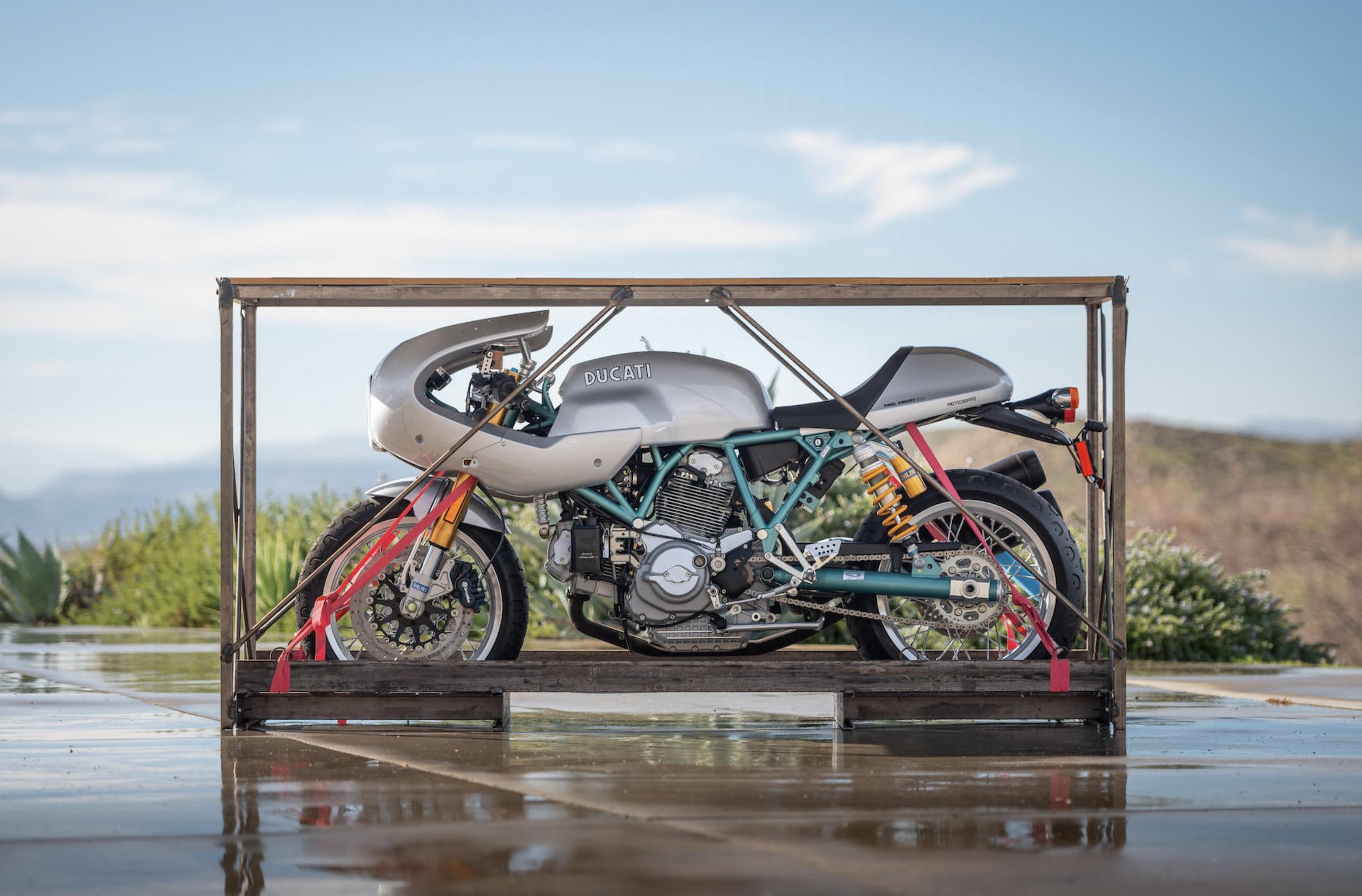