This 1966 Dodge A100 remains in largely original and working condition thanks to the fact that it spent most of its life safely tucked away in a surf shop in New Jersey, away from the rain, sun, and salted roads.

It’s now being offered for sale in matching-numbers condition, powered by its original 3.7 liter slat-six offering 145 bhp and sending power to the rear wheels via a 3-speed manual transmission.

The 1960s were the decade that the concept of the van really came into its own. Vans had been popular for commercial purposes before this time of course, but with the explosion of the Hippie movement vans became a favorite form of both transportation and accommodation. 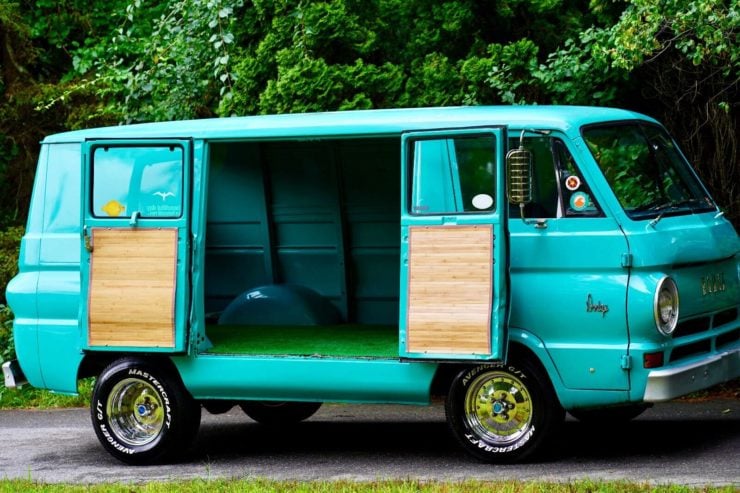 The van has side and rear opening doors for accessing the cargo area.

The Chrysler Corporation began developing the A100 in both van and pickup truck variants in the early 1960s specifically to compete with the likes of the Volkswagen Type 2, Ford Econoline, Chevrolet Van, and the Chevrolet Corvair Greenbrier.

The A100 was sold under the Dodge nameplate, and interestingly the cab would later be used on the large L-series medium-duty cabover engine Dodge trucks with a forward tilting mechanism to access the engine.

The design of the Dodge A100 was strongly influenced by other vans, particularly the VW Type 2 and the Ford Econoline. It had the same split windshield as the Type 2, similar dimensions, and body styling close to the early examples of the Ford.

A simple steel unibody structure was used for the A100, with the driver and passenger positioned up front in a cab-over-engine layout with the engine between them. This afforded maximum space for cargo in the rear for both the van and pickup truck variants. 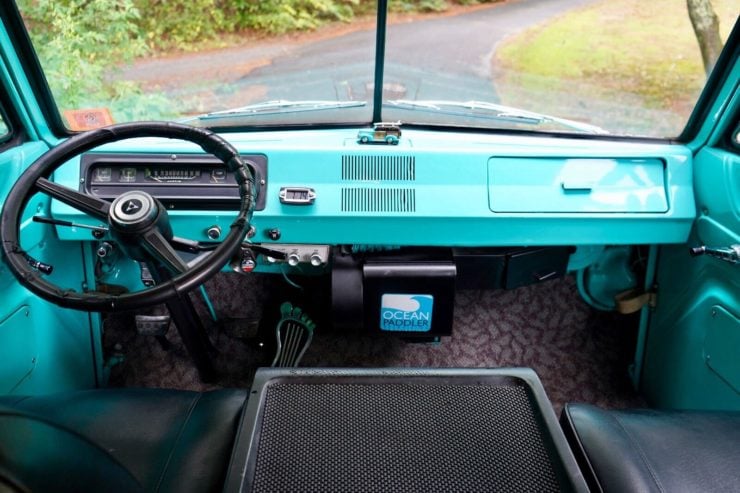 As a COE or cab-over-engine design the engine is situated between the driver and passenger seats.

The Dodge A100 proved popular enough that the Dodge Sprinter van was developed to succeed it in 1970. The Sprinter was a larger van that would remain in production (with a  number of updates) from 1970 until 2003.

As noted in the introduction, this 1966 Dodge A100 has led a blessed life in a New Jersey surf shop, out of the rain and weather that caused the rusty demise of so many of its contemporaries.

It remains in largely original condition, including its eye-catching turquoise paint work and its black interior. It’s riding on period-correct chromed steel wheels fitted with staggered Mastercraft Avenger G/T tires – the fronts are 215/70/40 and the rears are 225/70/40.

This van is powered by the popular 3.7 liter slant-six sending power back through a 3-speed manual transmission, and it comes with two sets of keys, original owners manual and service manual, and the original spare wheel.

It’s currently being offered on eBay with a Buy It Now price of $24,900 USD out of Stow, Massachusetts and you can visit the listing here if you’d like to read more or make them an offer. 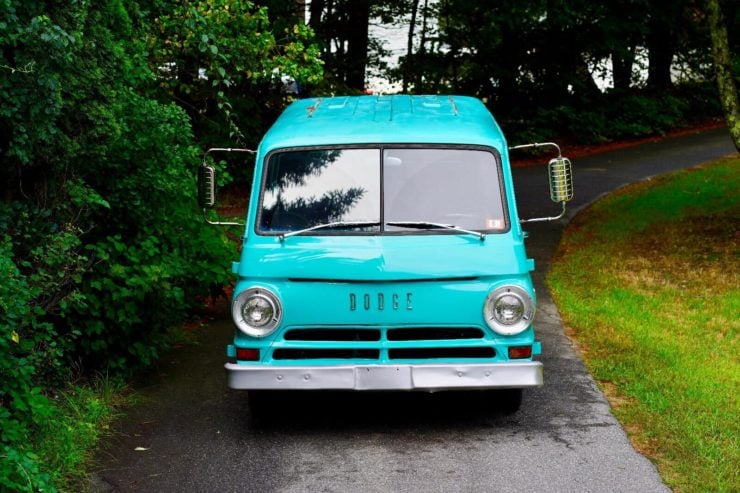 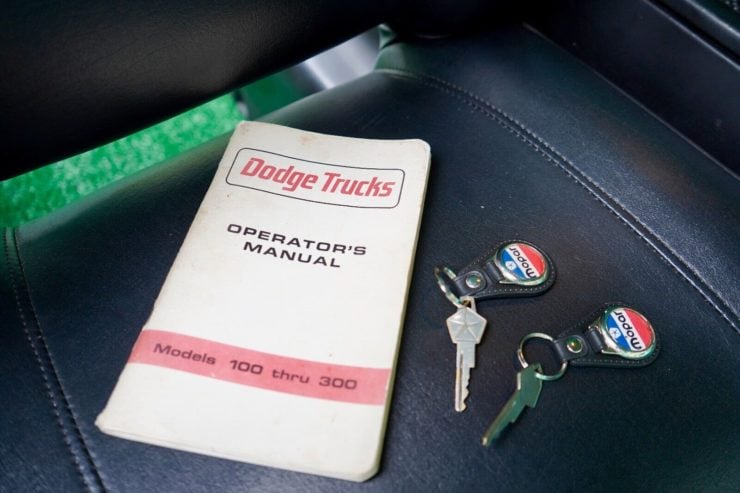 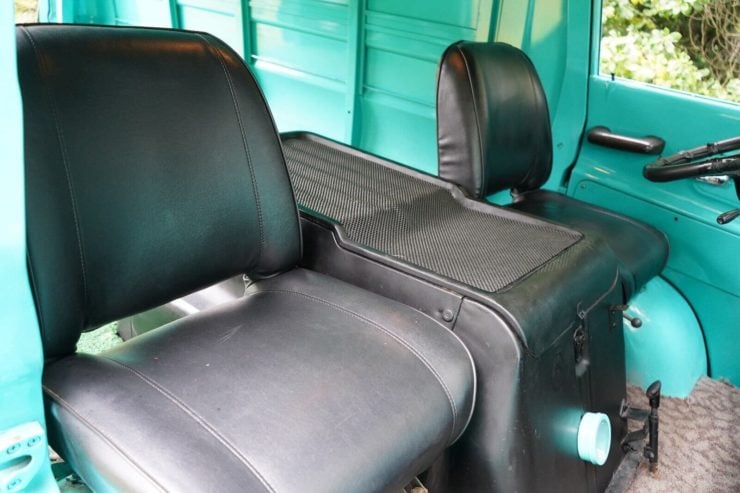 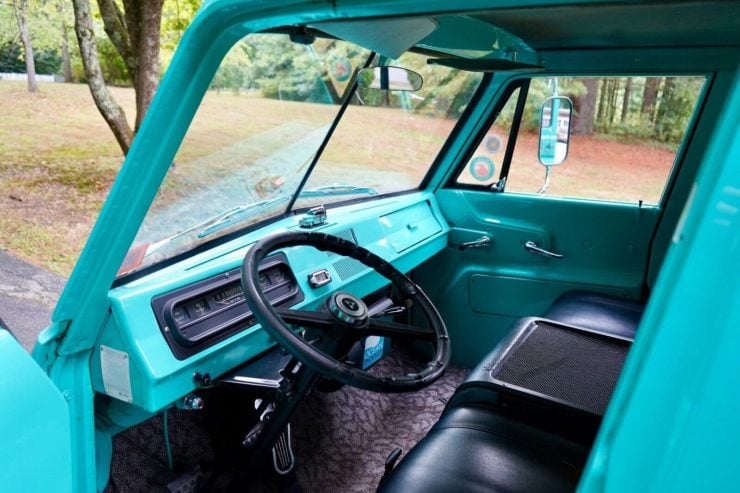 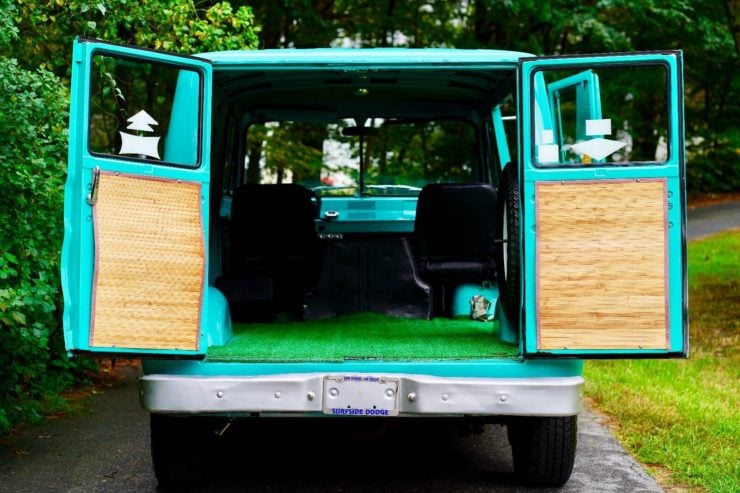 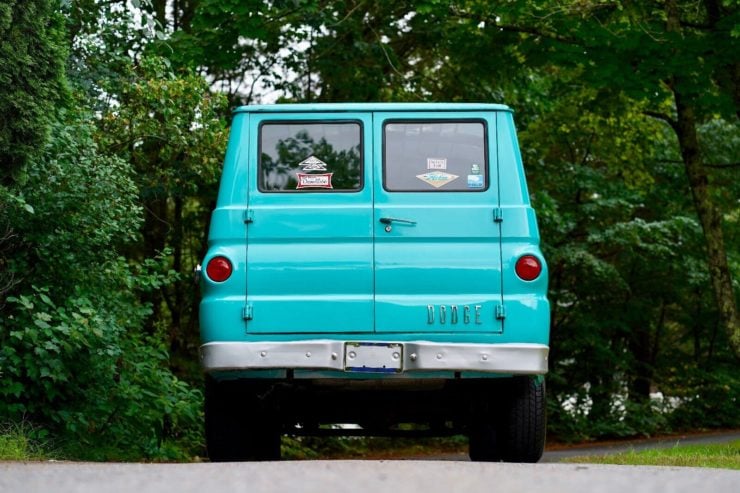 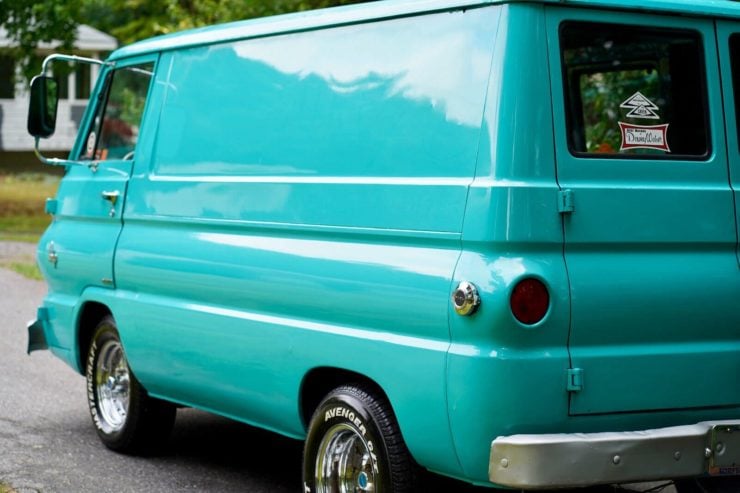 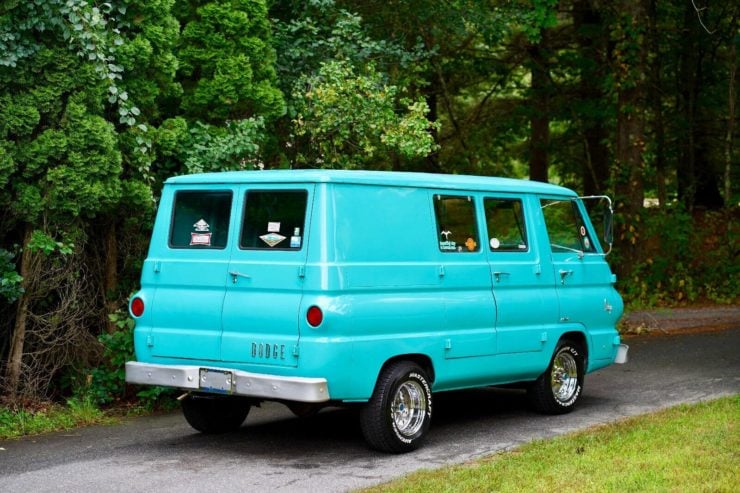 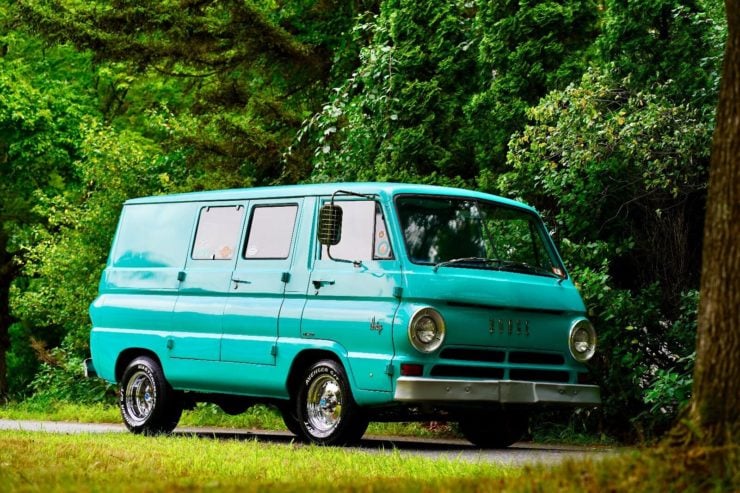 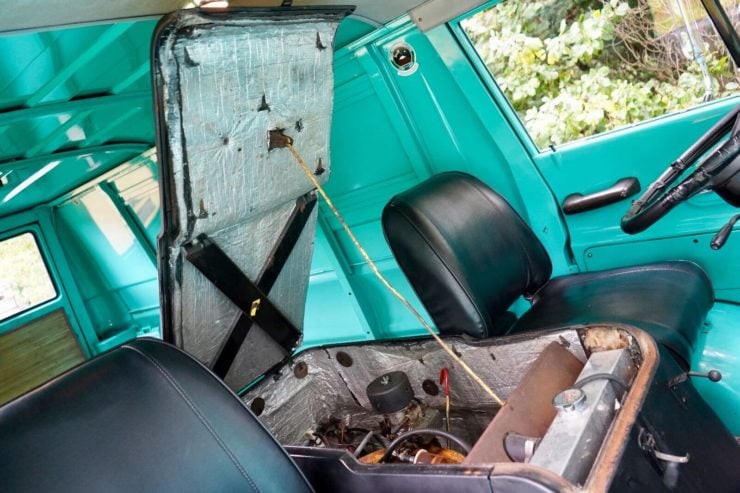 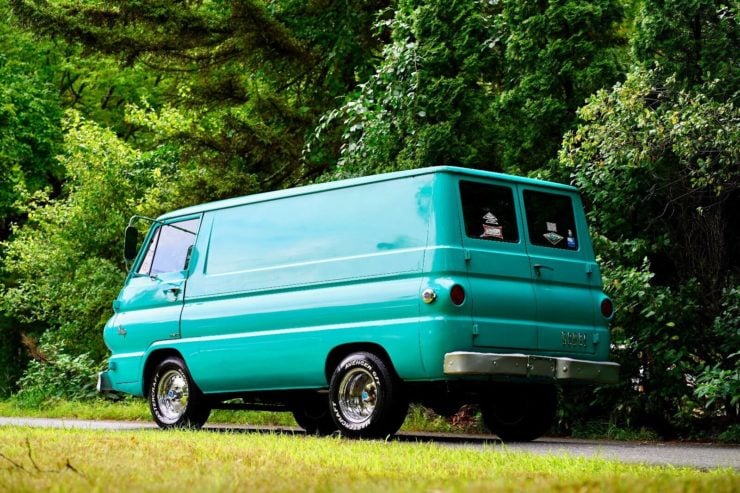 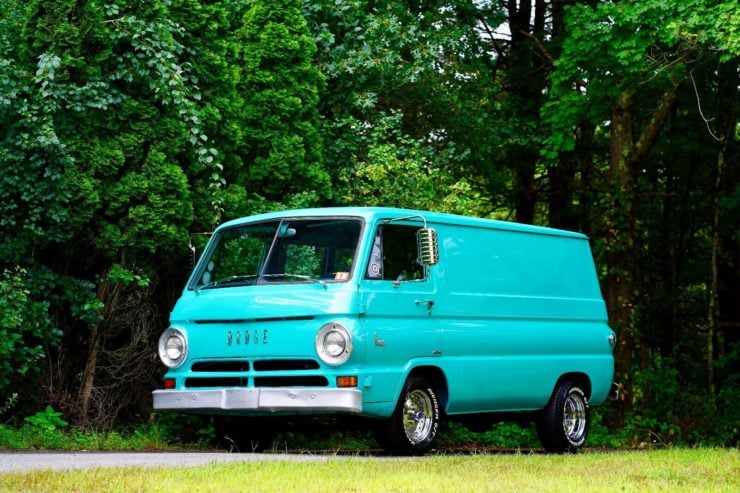 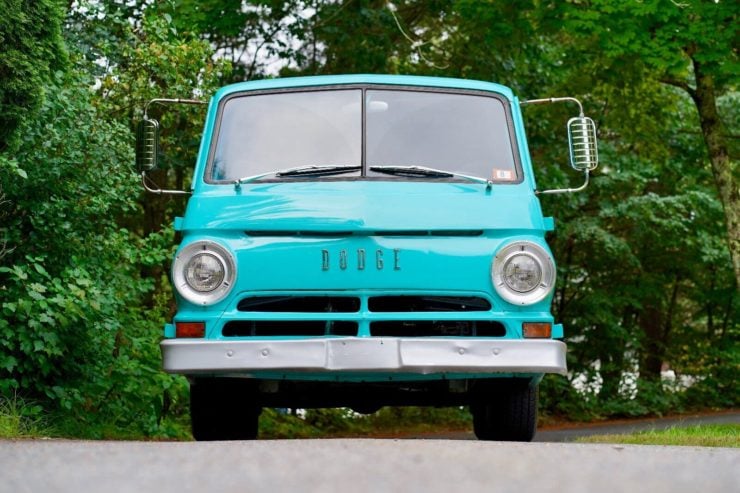