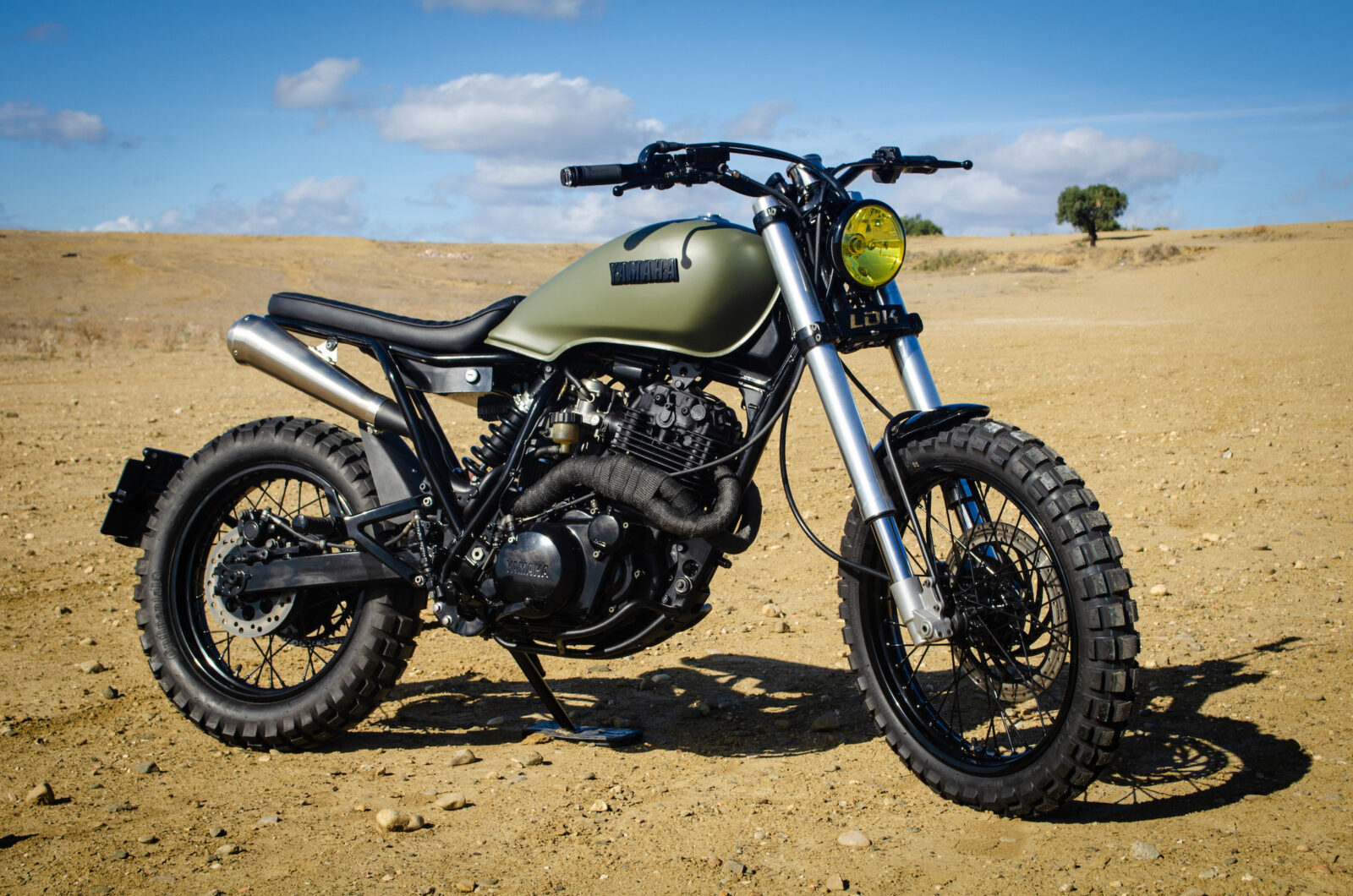 This is a custom Yamaha XT600 by the team at Lord Drake Customs, it’s been considerably modified to add to its dual sport abilities, and it’s very likely that the Spanish custom motorcycle garage saved it from certain death on the scrap heap.

The Yamaha XT600 was first released in 1981 as the successor to one of the most important dual sport motorcycles in history, the Yamaha XT500.

Now I know that hearing about a slew of different model names isn’t particularly interesting but in this case it’s worth it – the XT500 won the motorcycle class of the first two Paris-Dakar Rallies in 1979 and 1980, as well as the Paris–Abidjan-Nice rally.

The XT500 was the bike to beat until BMW released the R80 G/S, and the descendants of both of these motorcycles remain in production today, making up a significant part of the backbone of the dual sport and adventure motorcycle world.

It was clear to Yamaha that the XT600 would have to be two things if it was to be a success, it would need to be an upgrade over the already popular XT500, and it would need to have all the toughness and versatility of its forebear.

Yamaha engineers would keep the single overhead cam of the XT500 but add four valves instead of two, notably improving breathing for the single-cylinder, air-cooled engine. Power was sent to the rear wheel via a 5-speed transmission and a chain drive, and the new model produced 46 bhp compared to its predecessor’s 32 bhp (depending on model version).

So successful was the Yamaha XT600 that it was kept in production with a steady stream of upgrades from 1983 until 2003, a solid 20 year production run after which time it was replaced by the similar Yamaha XT660 model series. 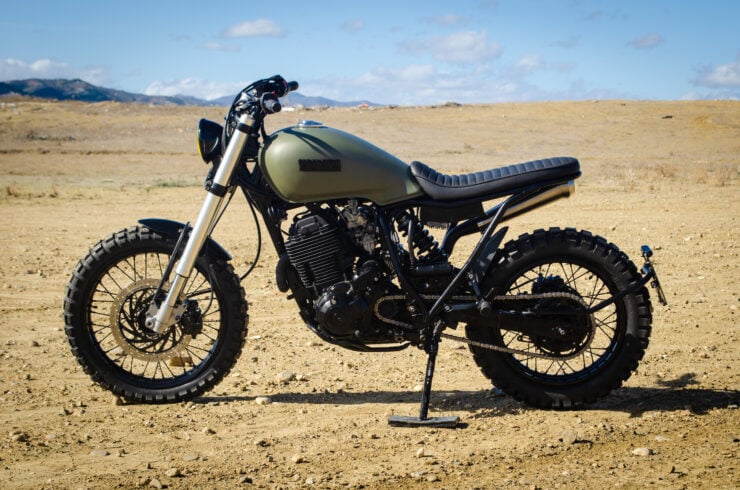 Above Image: With its new suspension, wheels, and tires this XT600 is even more capable off-road than the original.

The motorcycle you see here bares little outward resemblance to the original XT600 it’s based on, it’s been comprehensively rebuilt to enhance its abilities in every way for its next owner.

Unusually the team at Lord Drake Customs bought this bike from a riding school, countless students had learned the ropes in its saddle and as you can imagine, this had take a toll on the engine. The first order of business was a full engine rebuild to ensure that any wear from its previous life would be eliminated.

The original frame was kept but new inverted forks were added up front, paired with new monoshock in the rear giving an additional 2 inches of ground clearance. The original fuel tank and seat were removed and replaced – getting the new fuel tank to fit was an arduous task due to the oil tank placement, but they made it work.

The original exhaust headers were wrapped and paired with a new Spark muffler that exits out high just below the seat. A set of Continental TKC80 tires were fitted front and back for optimal grip on the dirt, and a pair of wide handlebars have been installed for good control at lower speeds.

New brake rotors were fitted to replace the worn originals, they also added spoked wheels with a 19 inch up front and a 17 inch in the rear. The carburetor received a new higher flow air filter, this combined with the new freer flowing exhaust called for some carburetor re-jetting, which in turn resulted in a slight boost in power.

The original exhaust headers were wrapped and paired with a new Spark muffler that exits out high just below the seat. A set of Continental TKC80 tires were fitted front and back for optimal grip on the dirt, and a pair of wide handlebars have been installed for good control at lower speeds.

The completed custom keeps the spirit of the XT600 alive but adds to it with better suspension, a little more power, and fresh brakes. 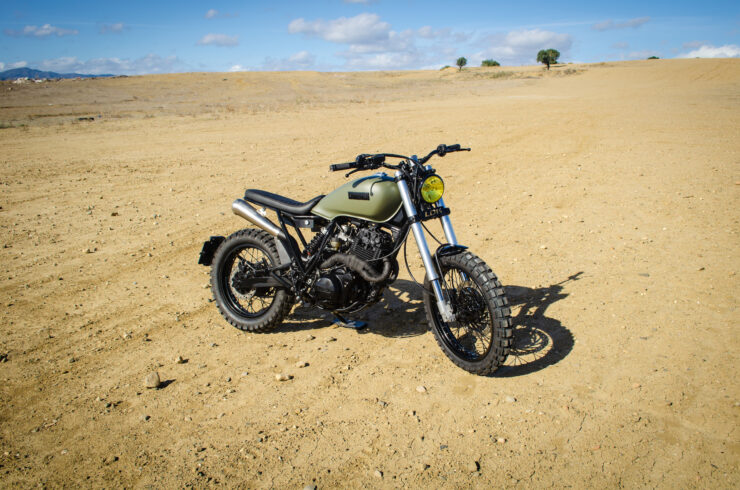 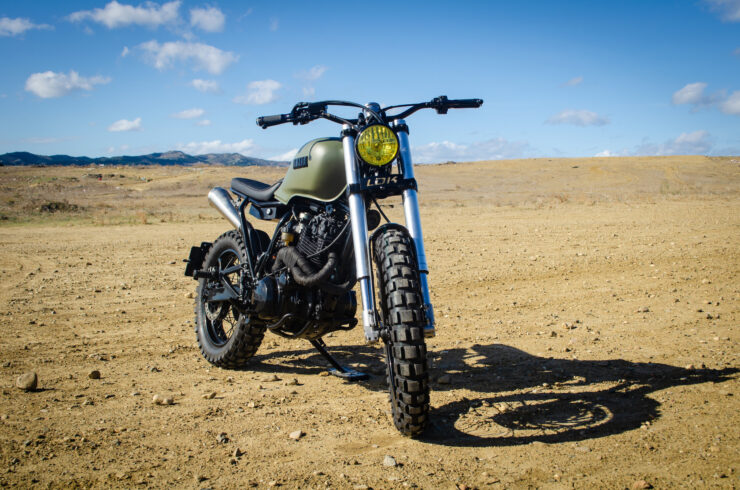 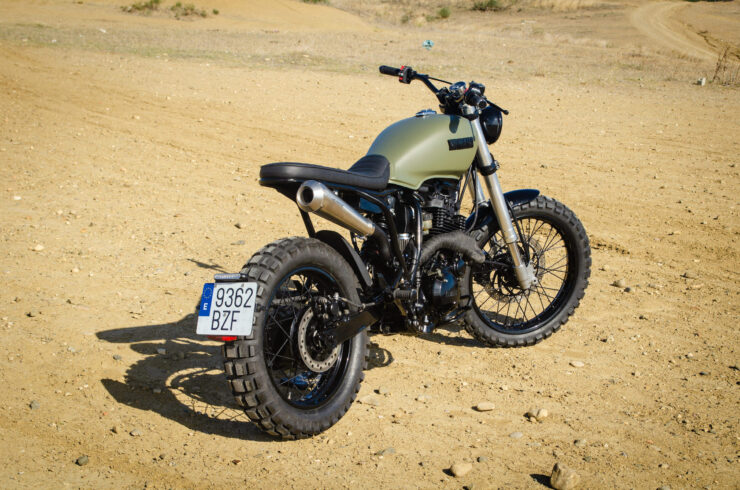 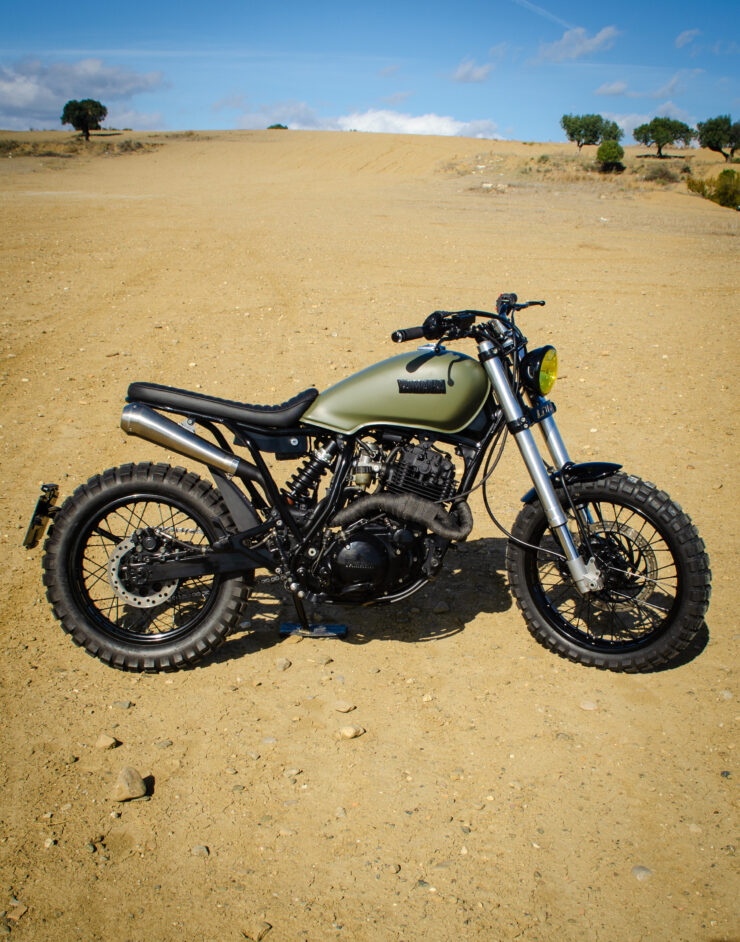 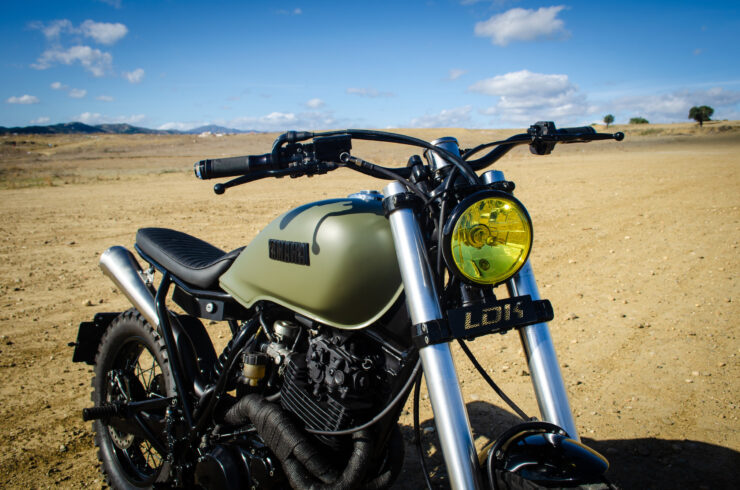 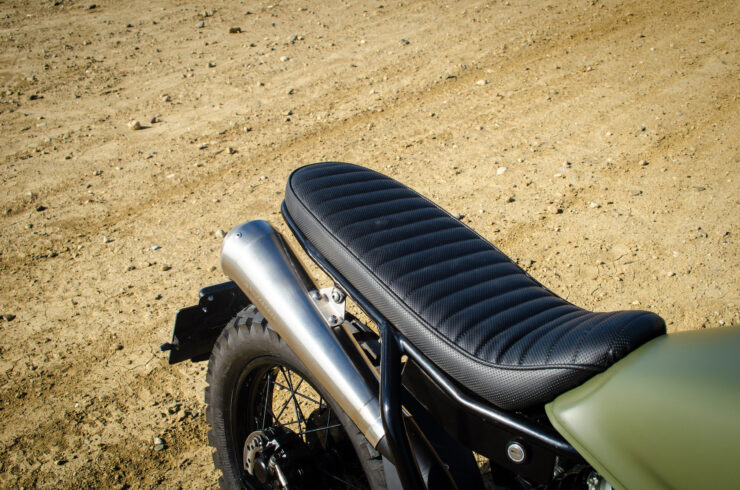 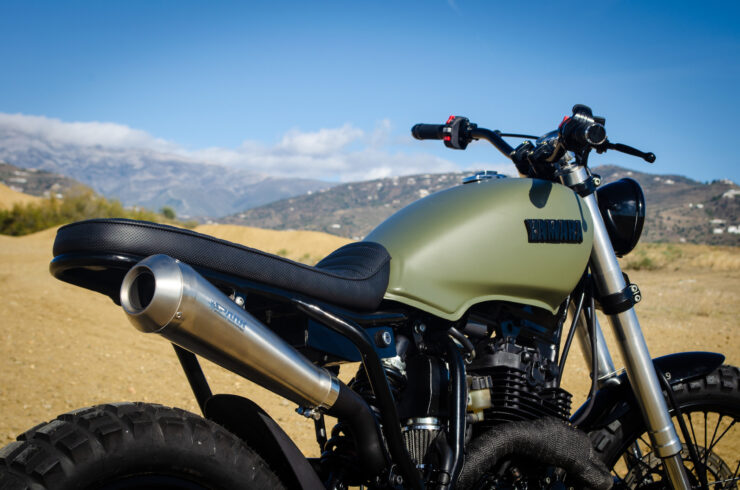 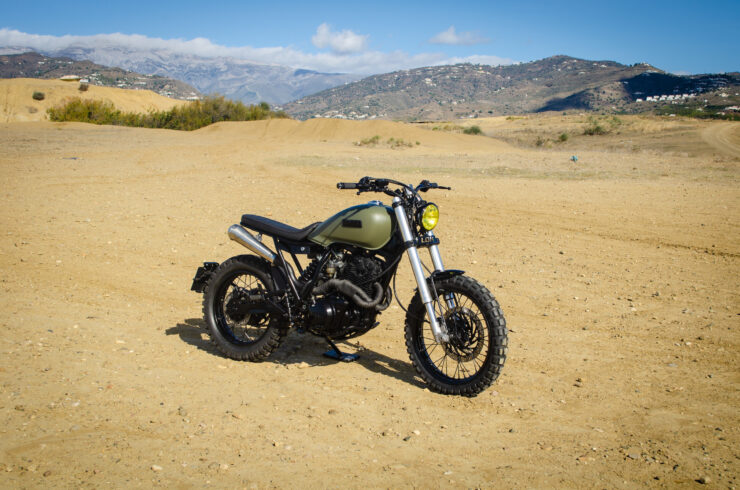 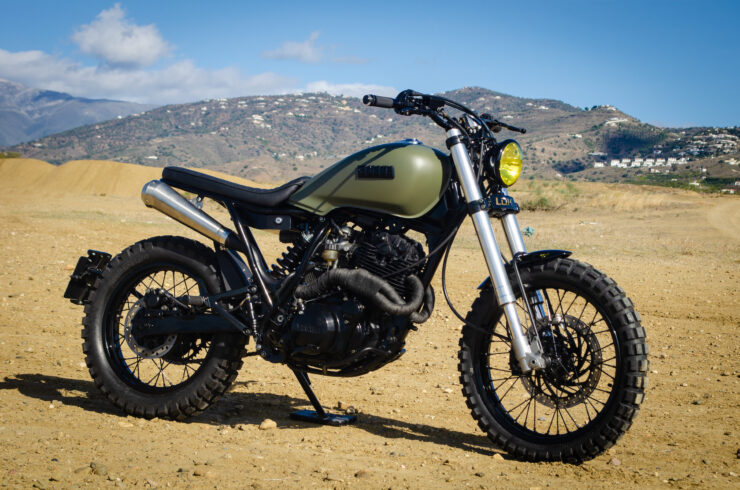 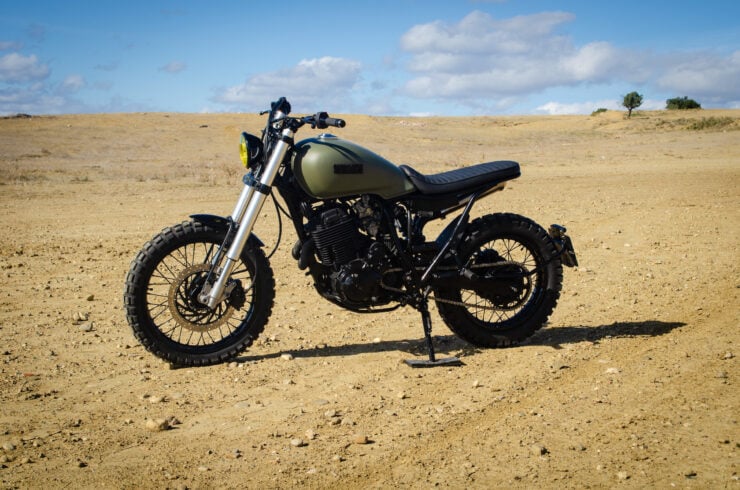 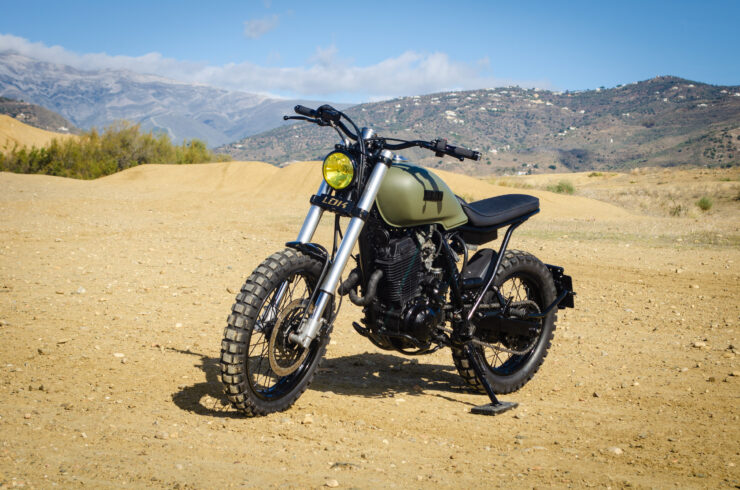 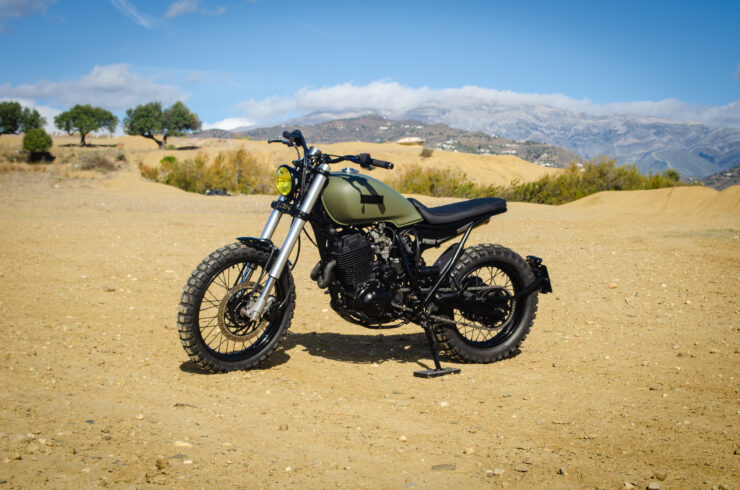 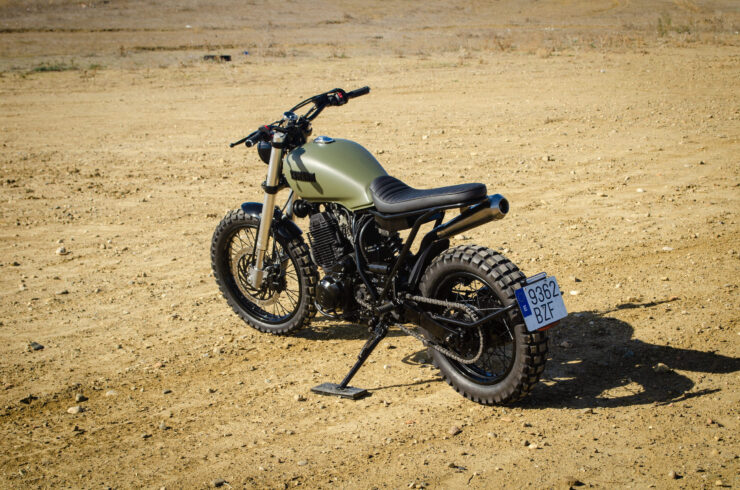