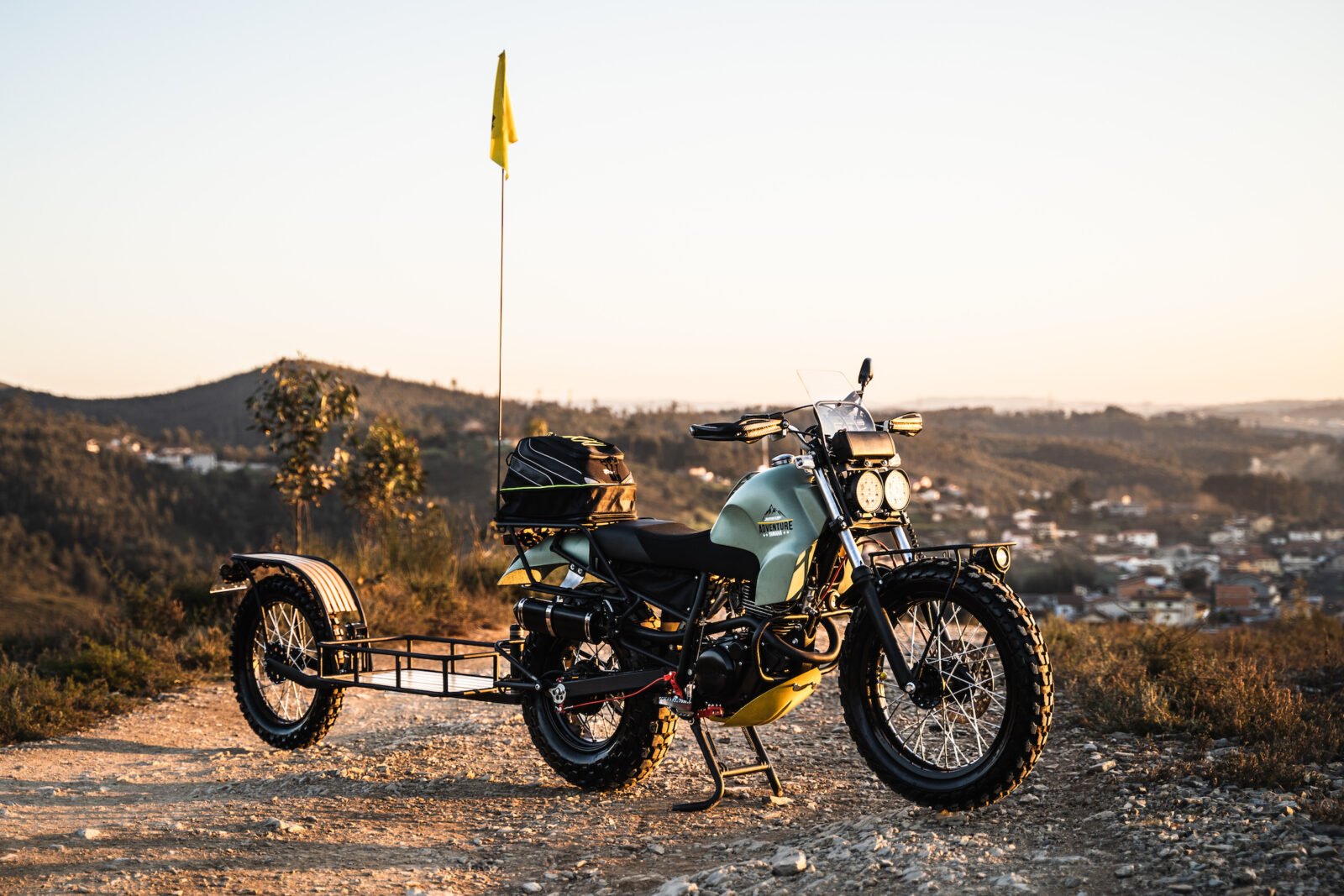 This Yamaha TW125 was completely rebuilt by classic car restorer Manuel Vieira, his goal was to build the perfect long-range off-roader with a fuel efficient 125cc engine, a large capacity fuel tank, and ample space for carrying supplies.

Vieira is based in Vila Nova de Gaia, about 10 kms from Oporto in Portugal. He has been a production manager in the textile industry until the industry collapsed during the Great Recession, after leaving the textile world he turned to his true passion – restoring classic cars.

Over the past decade Vieira has made a name for himself bringing vintage cars back to life, but what many people don’t know about him is that he’s pretty handy at building motorcycles too – in fact the first project he ever embarked upon was building a sidecar for his bicycle when he was 12 years old.

The first motorcycle he developed was a modified trials bike for his 7 year old son, who rode it to a win in a Portuguese Trial Championship. When he works Vieira uses old school techniques, there’s no CAD software or 3D printers used at any part of the process, he painstakingly creates each part by hand to match what he sees in his head, and then moves onto the next part.

The bike you see here started life as a standard Yamaha TW125, it was bought from a previous owner who lived on the Azorean islands off the Portuguese coast. Initially it was modified for flat track racing however at some point the engine blew, relegating the bike back to the workshop. 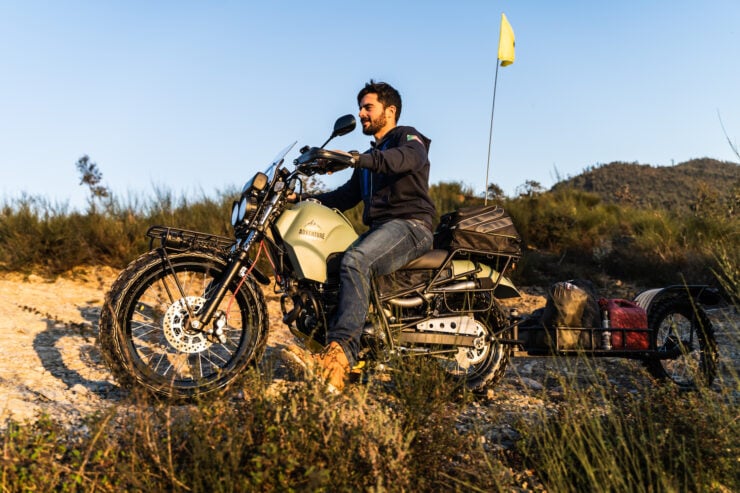 Above Image: With its ample luggage space and attached trailer this bike is capable of extended periods of travel off the grid.

Due to the proliferation of scramblers within the modern custom motorcycle scene, and the increasing number of scramblers being made by manufacturers, Vieira decided to create his own version of this 70+ year old motorcycle type.

Rather than creating the kind of scrambler that never sees the dirt and spends much of its life parked outside popular cafes, Vieira decided to create a genuinely capable two-wheeled Jeep. Just as with the original Willys Jeep from WW2 engine power would not be a major concern, rather it was decided to focus on giving the bike excellent trail riding ability and long-range.

The project began with a full teardown, the engine obviously needed a full rebuild and a new piston which it received, the frame was stripped and repainted, and it received a new subframe.

A luggage rack was added to above the front fender, this was paired with a luggage rack over the rear fender, and an all-new trailer was built allowing the bike to carry everything a person might need for long periods of time away from civilization.

The most challenging aspect of the build was creating the new higher-capacity fuel tank. Vieira carefully shaped it from foam initially with great care taken to get it symmetrical – no mean feat. A new intake system was devised to keep water out of the engine, an alloy tube now runs from the intake up to just behind the seat, and it’s capped with a washable foam filter. 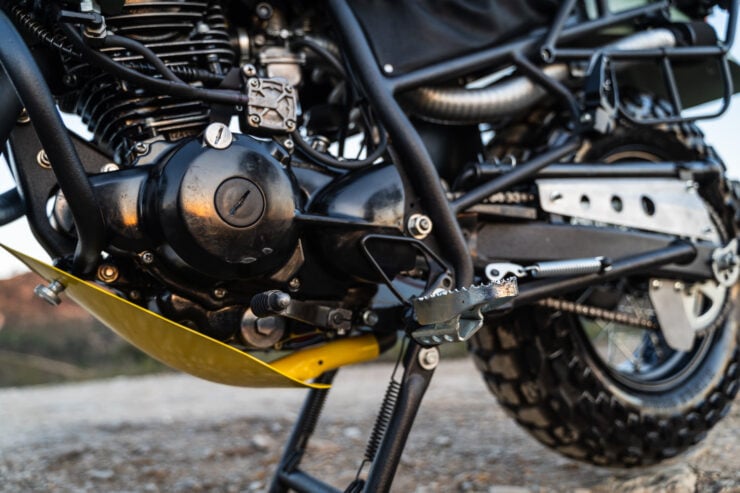 Above Image: The shovel-sump-guard keeps the delicate underbelly of the engine safe from rocks, plus it’s easy to remove and replace if needed.

Once the mould had been created the tank was laid up using fiberglass, and a matching rear fender was created using the same material with an old motocross fender used as a mould.

The was was fitted with twin LED headlights to ensure trails would be well lit at night, it has a small windscreen, a flag for improved visibility, and perhaps best of all, a shovel has been used as the under sump bash plate.

The completed bike is ideal for weekends away or for the occasional zombie apocalypse, it’s been named “Jumatsu TransWorld” and it won’t be the first such creation rolling out of this Portuguese garage.

Manuel Vieira doesn’t yet have a website or a social media presence, however we’ll be staying in touch with him and bringing you his new builds as they’re completed. 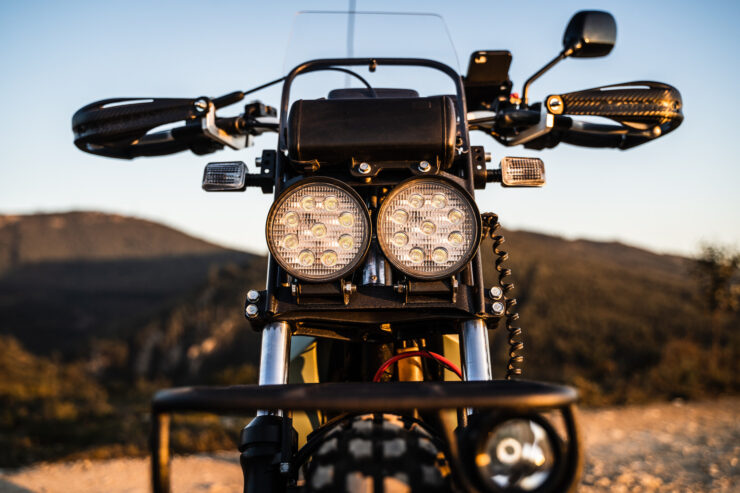 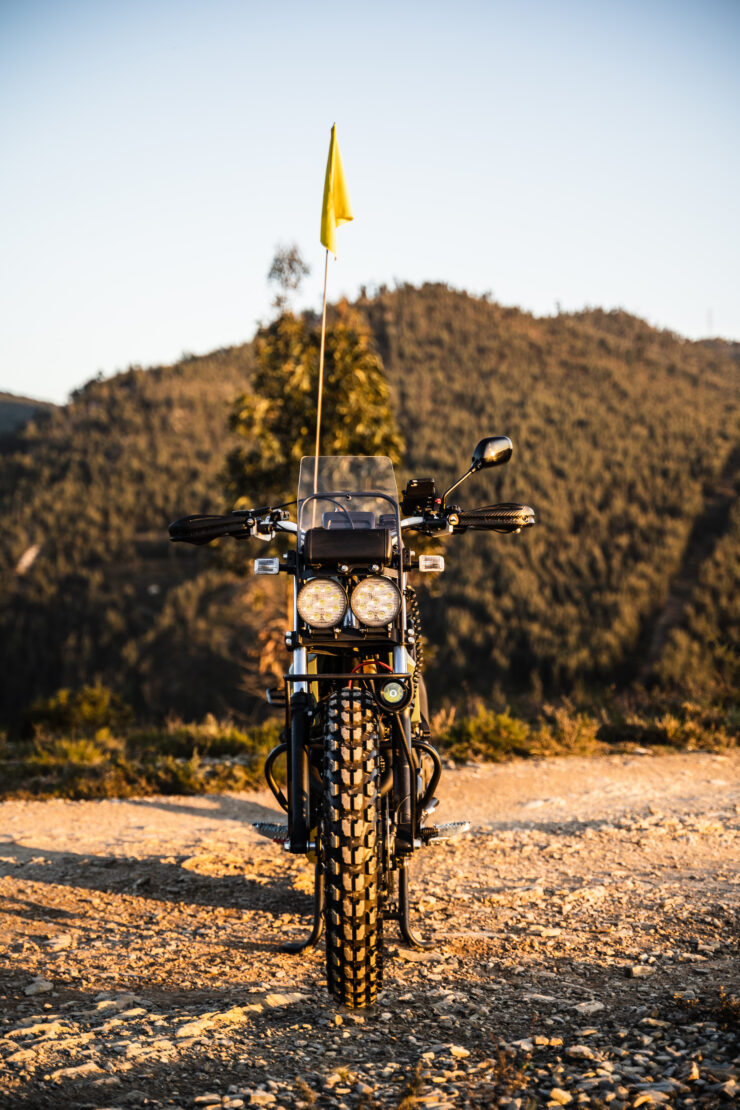 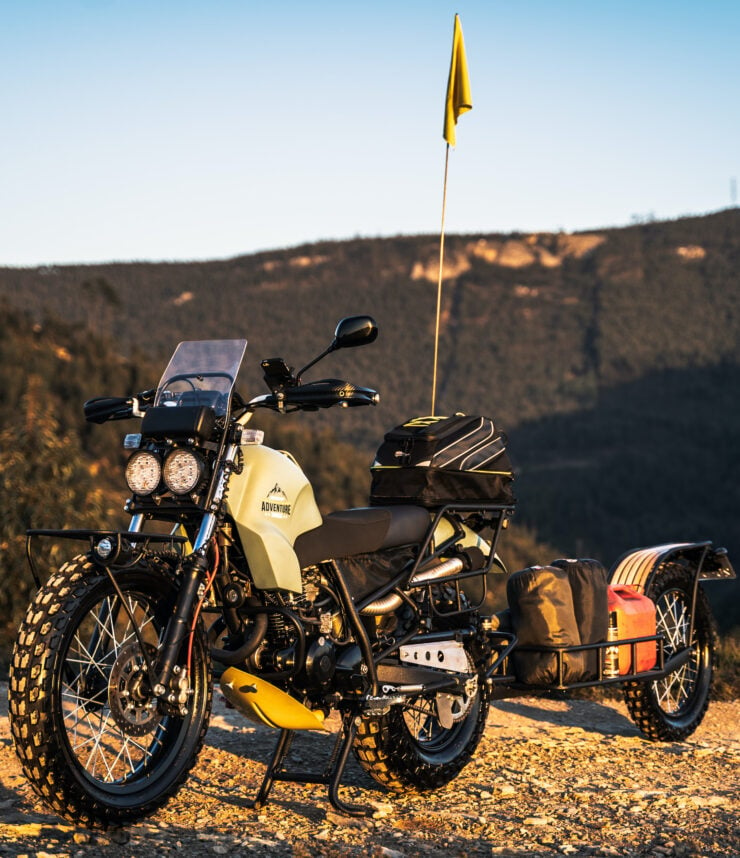 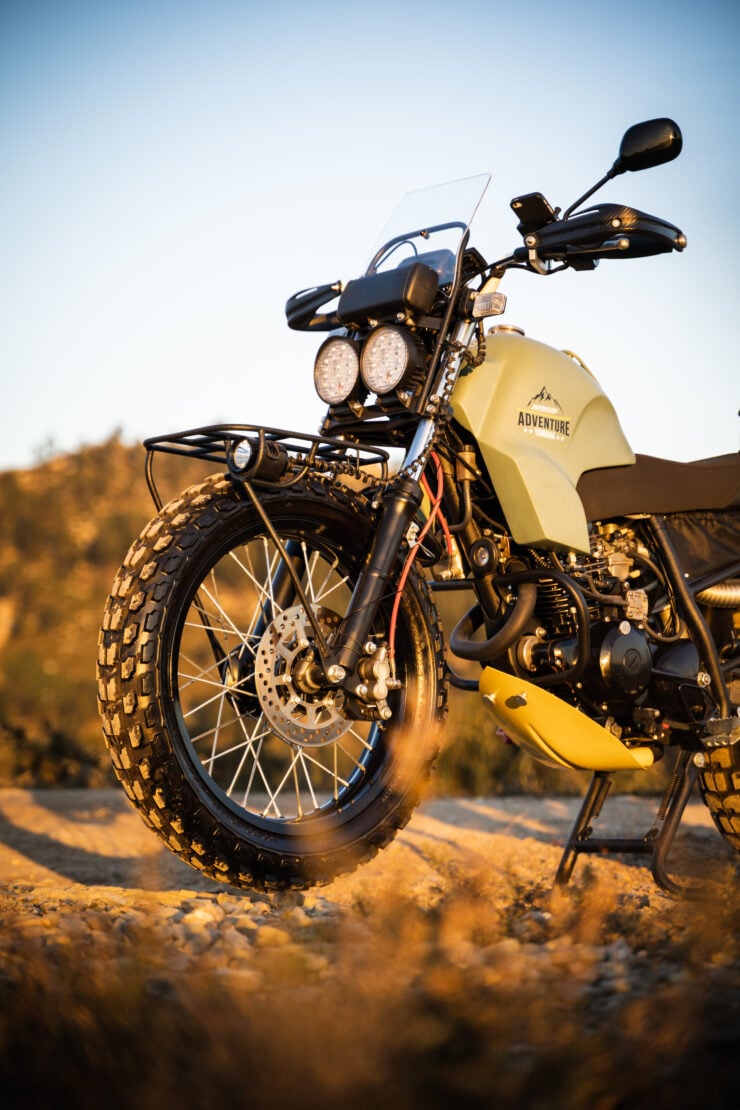 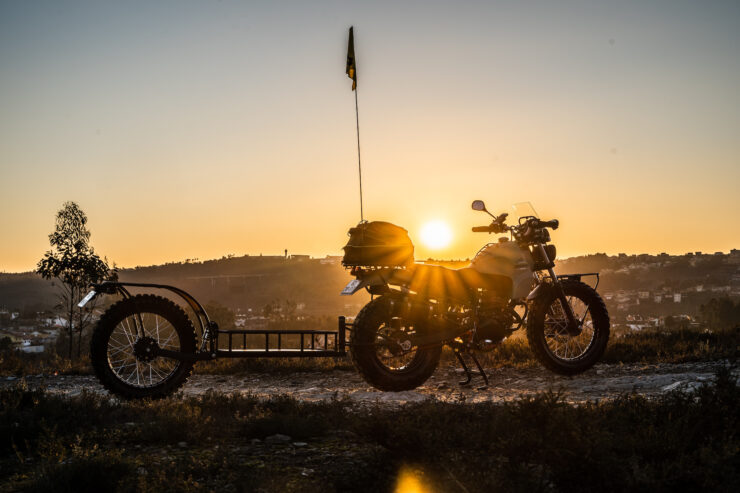 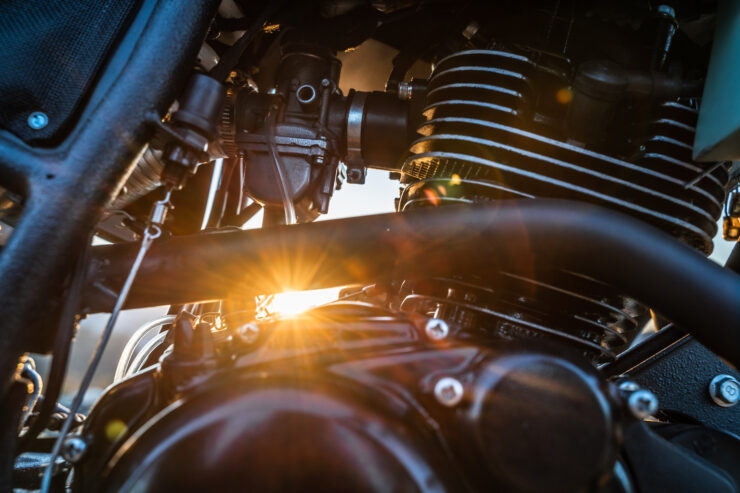 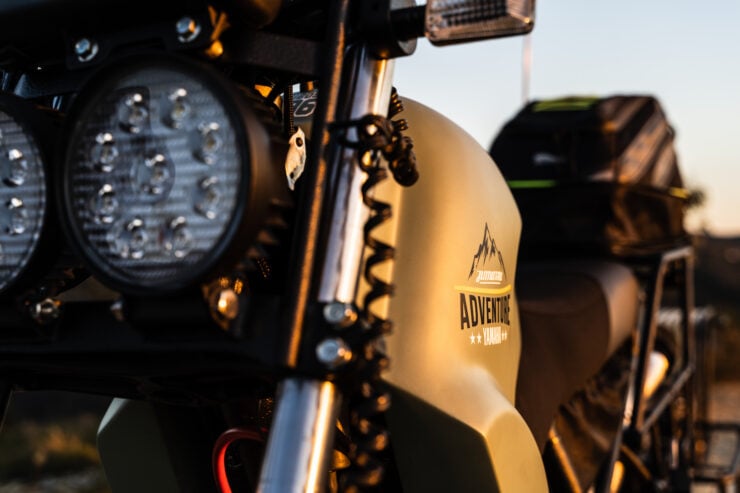 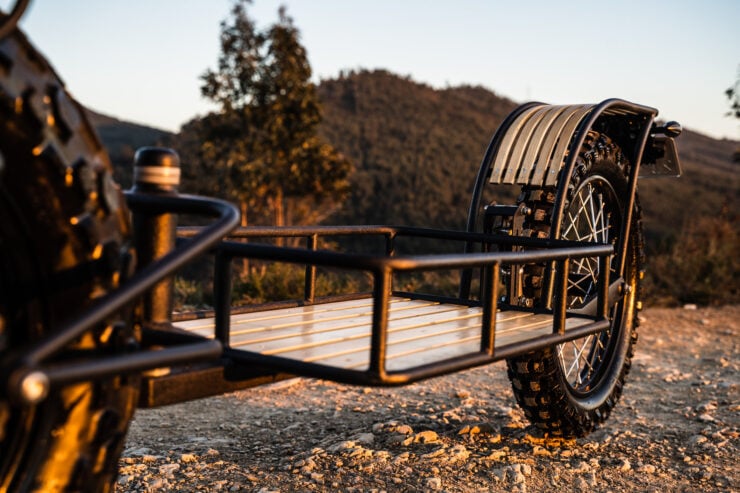 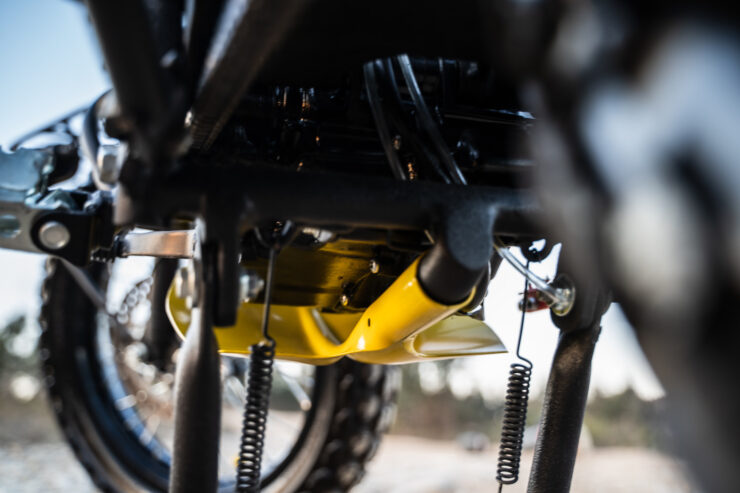 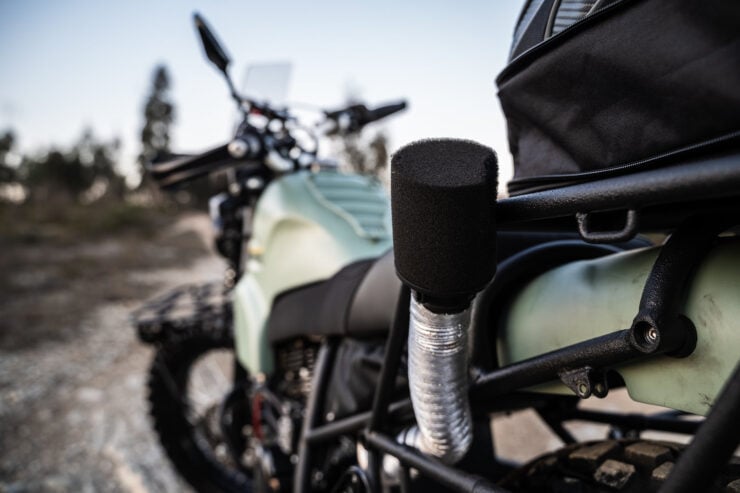 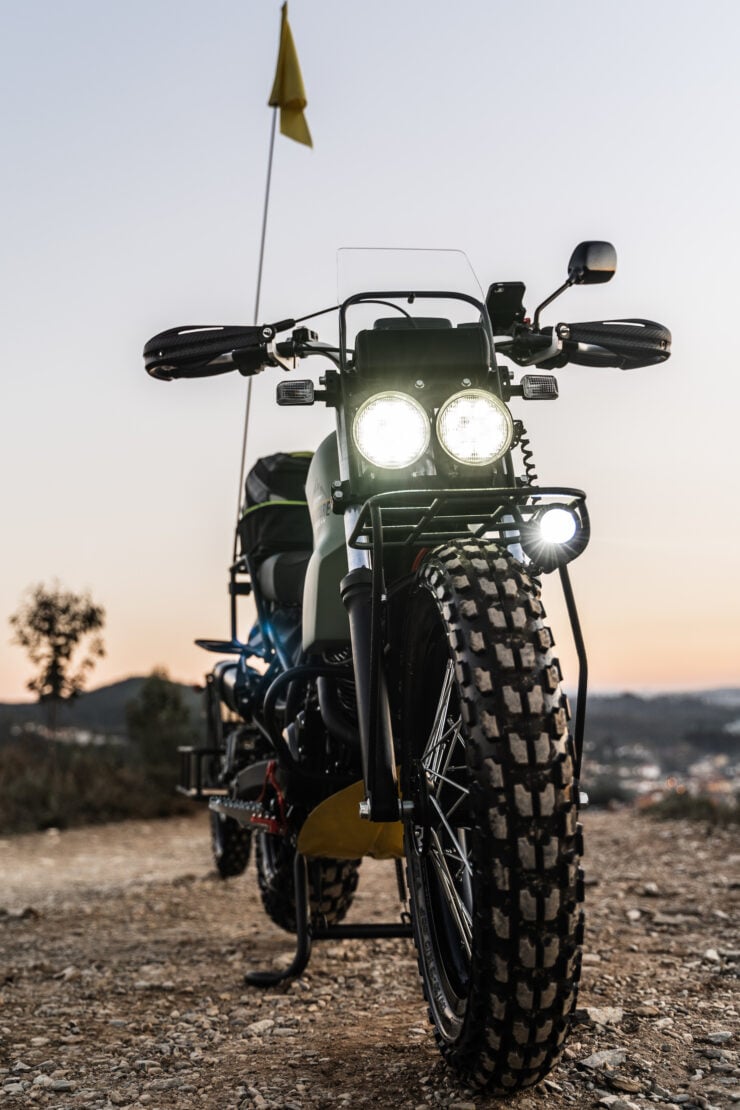 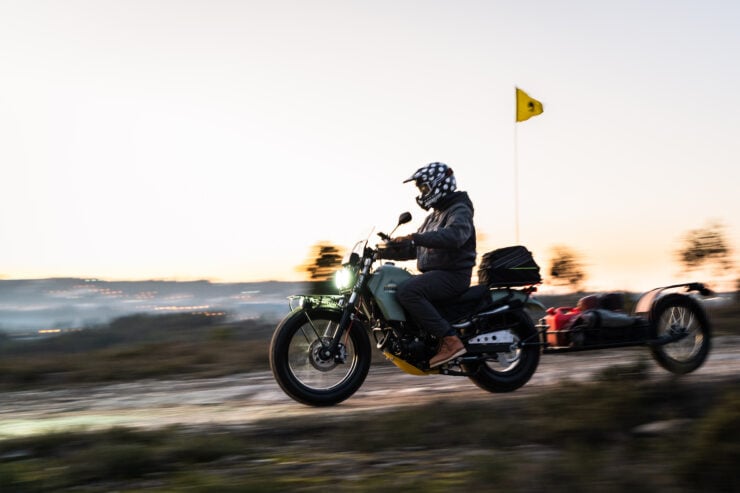 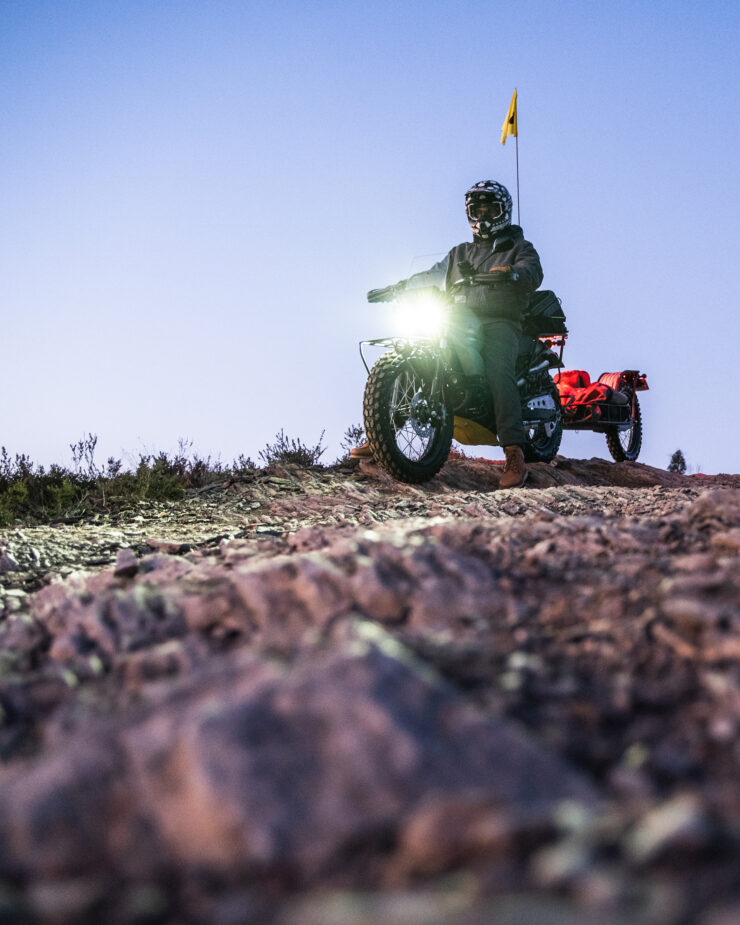 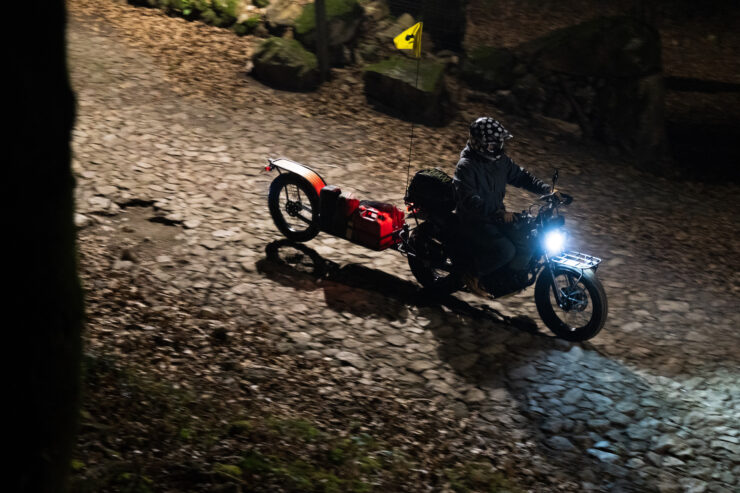 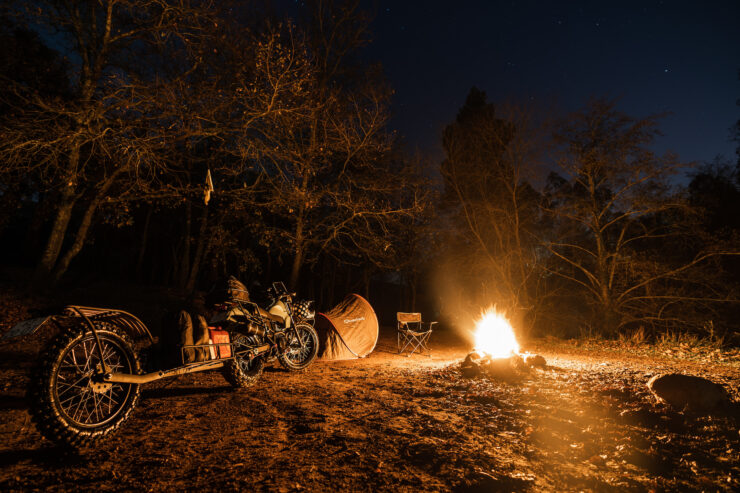