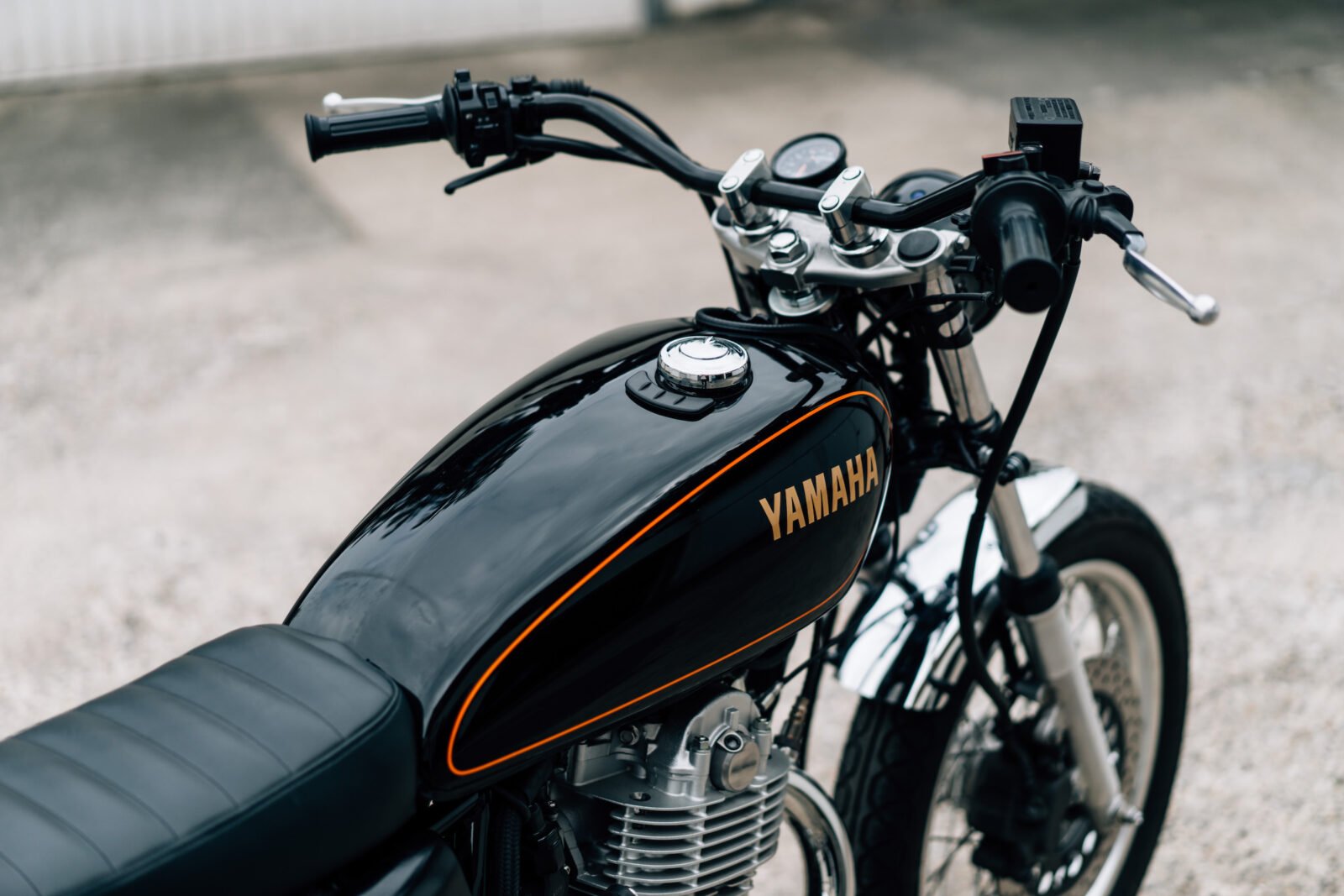 This article was written by Thomas Jeukens, founder of Toma Customs. When possible we like to bring you the story of a custom build in the words of the people who built it, to offer clear insight into their thought process and methods.

When we start a project, we first want to hear about the clients’ wishes and transformation ideas. It is a great opportunity for us to get to know our client and enables us to visualize what his dream bike would look like.

On this project, our customer (Benjamin) first idea was to turn his Yamaha SR 400 into a British style “Between the Wars” inspired custom bike. He would use it mainly for his daily rides in Brussels to commute from home to his work at the European Commission. He wanted the outlooks to be classic and elegant, and the use to be easy to ride on, and with a straight driving position. He also specified he wanted the custom to be subtle, not too flashy and matching his personality. 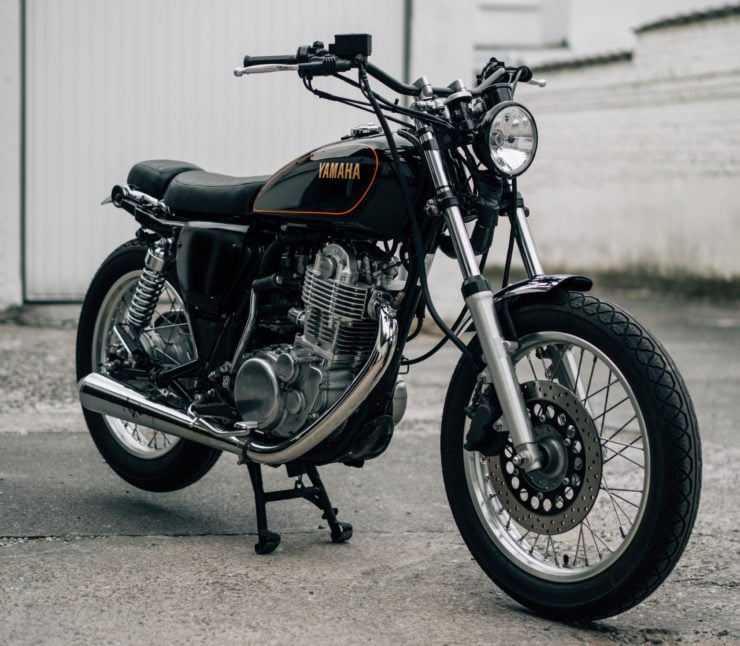 When Benjamin came to the workshop for the first time with his bike, we took the necessary time to know him better. And after a long discussion about details he wanted, we realized that his initial idea of the project was not perfectly aligned with his personality, the potential of the bike and that it did not really match the DNA of our workshop.

So, we proposed him to spend a few more hours in the workshop in order to start from scratch the creative process, and disassemble some superfluous parts to see what potential was hidden behind his bike. After hours of discussion about style and possibilities for the project, we got into the vibe of his dream bike and we knew the exact outlook of how the bike should look like.

We realized that a project inspired by the 60s’ flat track racing motorcycles keeping an ‘urban’ spirit would best fit his personality and also better match our DNA. We made a small sketch of what we had in mind and he was directly seduced by the new direction of the project, he could already picture himself driving the bike. This is an amazing feeling you know, when you see you went beyond your client’s expectations and ideas. After that, we just know we have to make this a dream come true. 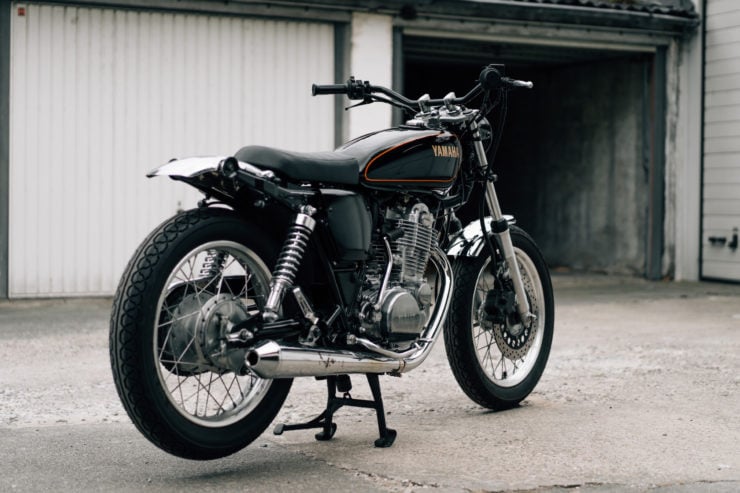 The only extra request that came out of the discussion and the we had to bare in mind during the project was to be able to create a removable extra seat as our client like to take his wife or kid for a ride during the weekend.

As Benjamin has is office not far away from the workshop, he came regularly to see the progress of the project and it allowed us to show him what we imagined for the next steps at each key stage of the project. He even came 2 times to try the saddle and the adjustments of the foam so it fits perfectly before we sewn the leather on it.

We love this kind of project and relationship with the customers, to take their ideas into account and try to achieve their dream motorcycle, even if sometimes it involves questioning their initial ideas and propose new directions for the project, if we feel it’s necessary and right. It’s really about this kind of experience that we want to evolve and bring our customers to, discussing details, sharing what we do, make them come to the workshop to live the project together, not just buying a product, but live an experience together and build the motorcycle of their dream.

Regarding the modifications, the first thing we went looking for was a way to align the tank with the frame. So, we modified the subframe and create new fasteners. Once the tank was in place, we shortened the rear part of the frame and started to work on the design and creation of the 2 saddles that we then sewed by our workshop. The finish and covering is in black leather. 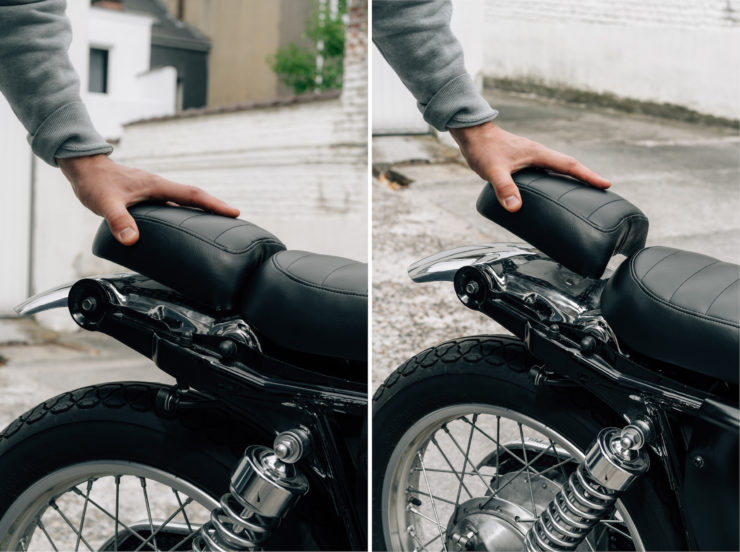 We also modified the handlebars to allow a straight driving position, adapted the front fender and tailor-made the rear fender in a retro flat track spirit.

All the electronics components have been replaced by new and more minimalist elements (headlight, tiny led indicatorlights, taillights, speedometer). List of modification also includes the build of a bespoke plate holder and bespoke side covers. 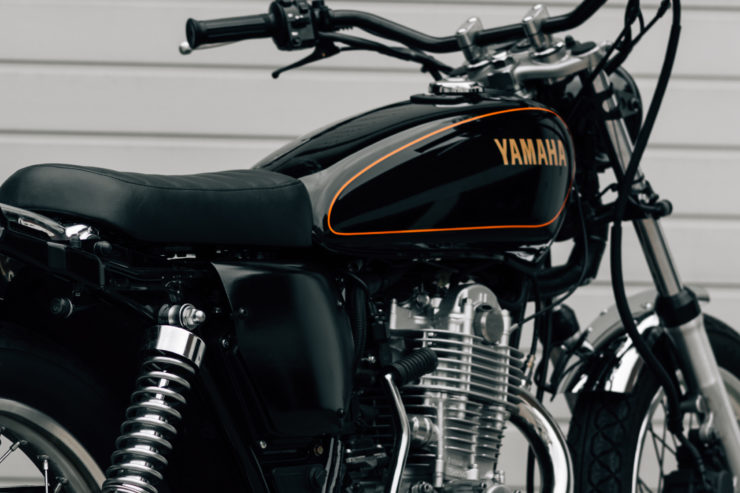 TOMA is a Brussels-based custom workshop. We transform, customise and hand finish motorcycles to create unique and personalised machines.

Our artistic approach strives to extract the best potential of each bike and match the vision of their future owner’s. We aim to create unique, one-of-a-kind machines, with a clean and efficient style.
Our work mainly focuses on tracker, scrambler, flat track and bratstyle projects.
Customising goes hand in hand with transforming to us. We do not only modify bikes we give them a new life, a new look.

We always work starting with an older, existing base and then begin adding new parts (tanks, wheels, handlebars, lights). Given the complexity of certain projects, we often create and adapt some of these parts ourselves, especially when they’re metal.
Before we even get going, we spend a lot of time with the future-owners to see where they come from, what their interests are, where and how they grew up, their tastes, what they’ve been doing in life etc. All these elements, along with a ton of aesthetic and artistic research, allow us to create the motorcycle of their dreams.

About the Owner of Toma Customs

I’m the owner of TOMA CUSTOMS, my name is Thomas Jeukens.

2 years ago, I decided to leave my job as Strategy Manager for a big consulting firm to open TOMA CUSTOMS and fully live from my passion, transforming and customising motorcycles.
Mixing mental and manual activities generates a level of freedom and satisfaction that I’d never experienced before.

Working as a manager at a big consulting company enriched me personally and professionally, while it also made me grow and evolve as a person. Yet, I felt it was time for me to achieve one of my dreams and to fully live my passion: combining my intellectual abilities with creativity and manual work. That’s why I decided to turn my passion into my job. 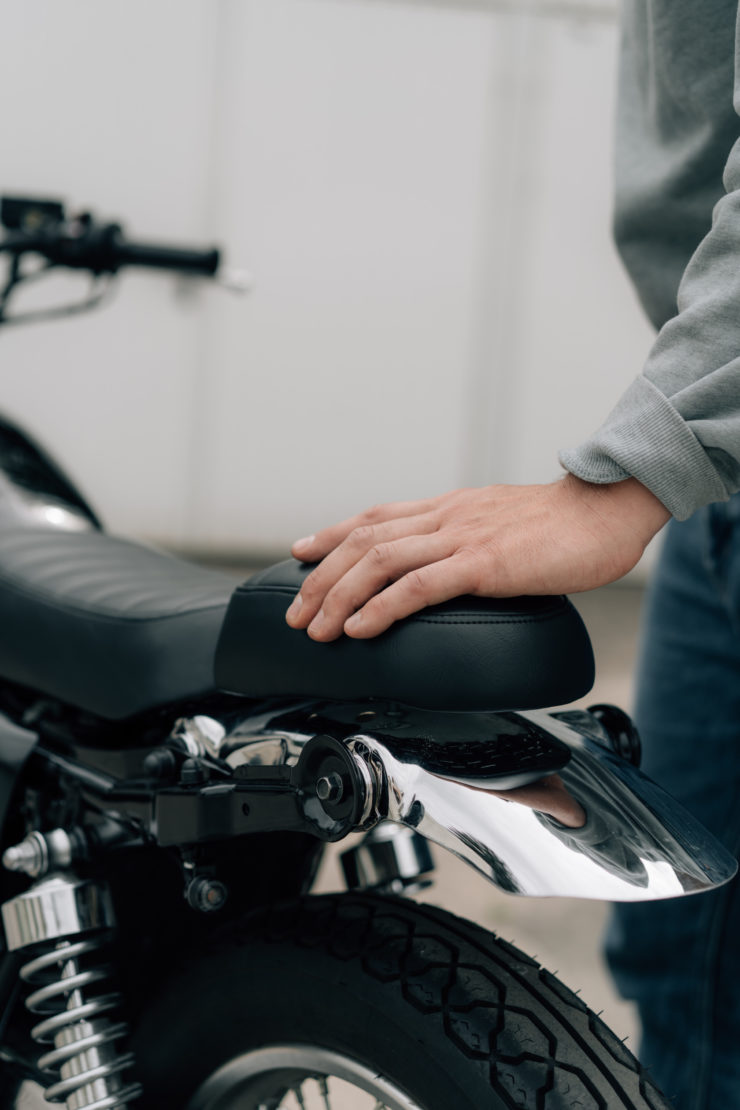 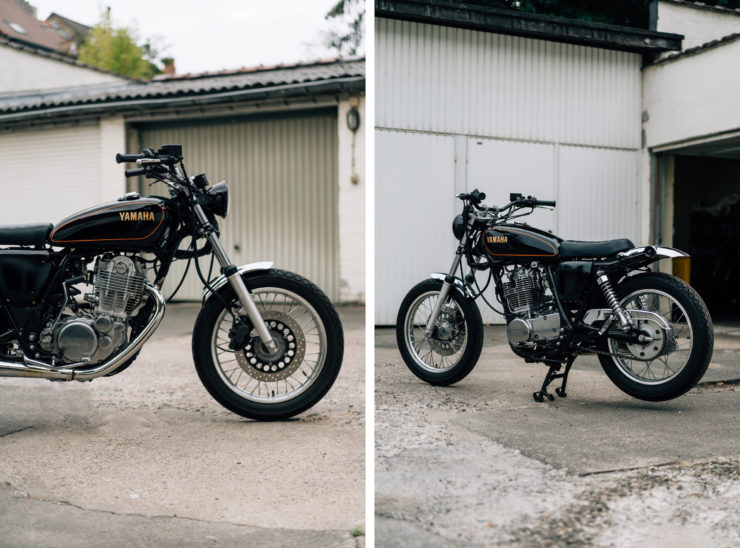 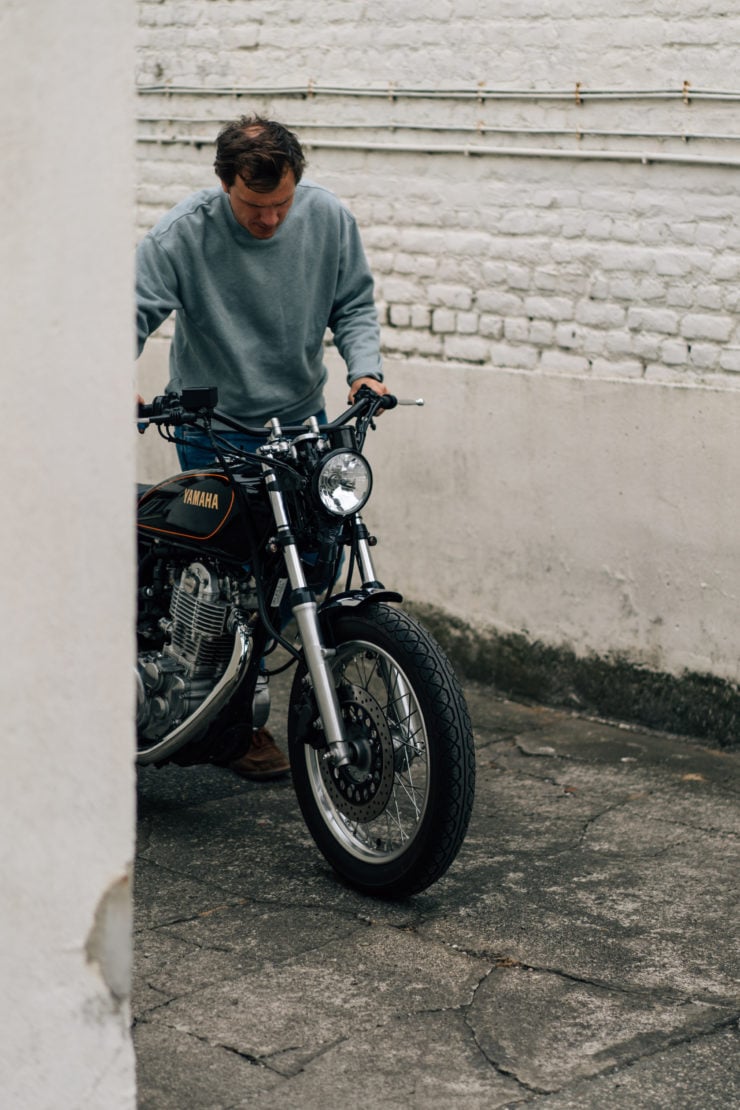 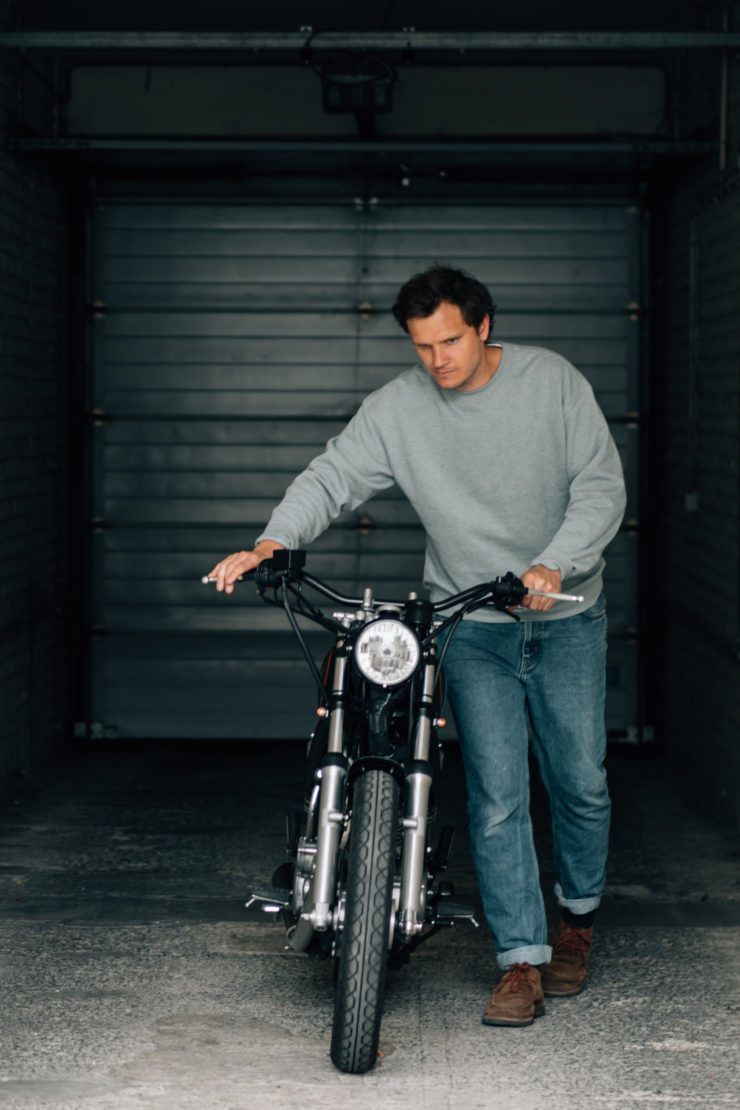 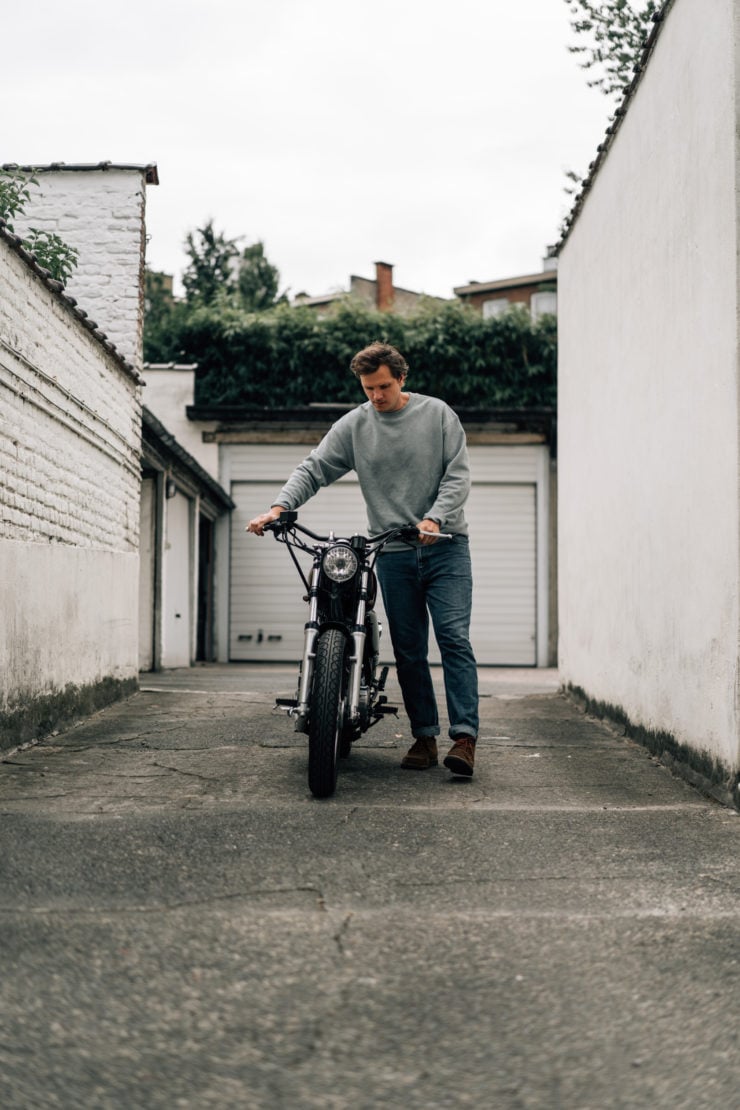 This short time-lapse film captures the restoration of an original 1969 Honda CB750 (Sandcast). Remarkably the restoration was completed by Sam Roberts in a small one-car garage, and he finished the bike to such a high level that it won Best of Show at the 2019 Quail Motorcycle Gathering – one of the most prestigious…

This article was written by Per Gabos, the creator of this rather unusual pulsejet-powered motorcycle. The Weltmeister Fictional Experimental Motorcycle The Idea What if the Germans had built experimental pulsejet-powered motorcycles in the mid-1930s – how would these have been made and what would they have looked like? In the 1940s there were already…

This custom BMW R1100GS is the work of one of Poland’s pre-eminent custom motorcycle garages – Red Hot Chili Customs. The donor bike was bought from its former owner in Switzerland before being transported to Poland for a rebuild into a custom scrambler with genuine off-road ability thanks to its GS origins. Red Hot Chili…

This article was written by Bujar Muharremi, the co-founder of AutoFabrica. When possible we like to bring you the story of a custom build in the words of the people who built it, to offer clear insight into their thought process and methods. The Type 7G started life as a 1978 SR500 Yamaha, the big…

This is the latest film from the team at Stories of Bike, it’s been made in collaboration with The Distinguished Gentleman’s Ride, a global charity that brings together tens of thousands of riders in hundreds of cities around the world raise millions of dollars for prostate cancer research and men’s mental health initiatives. This year’s…