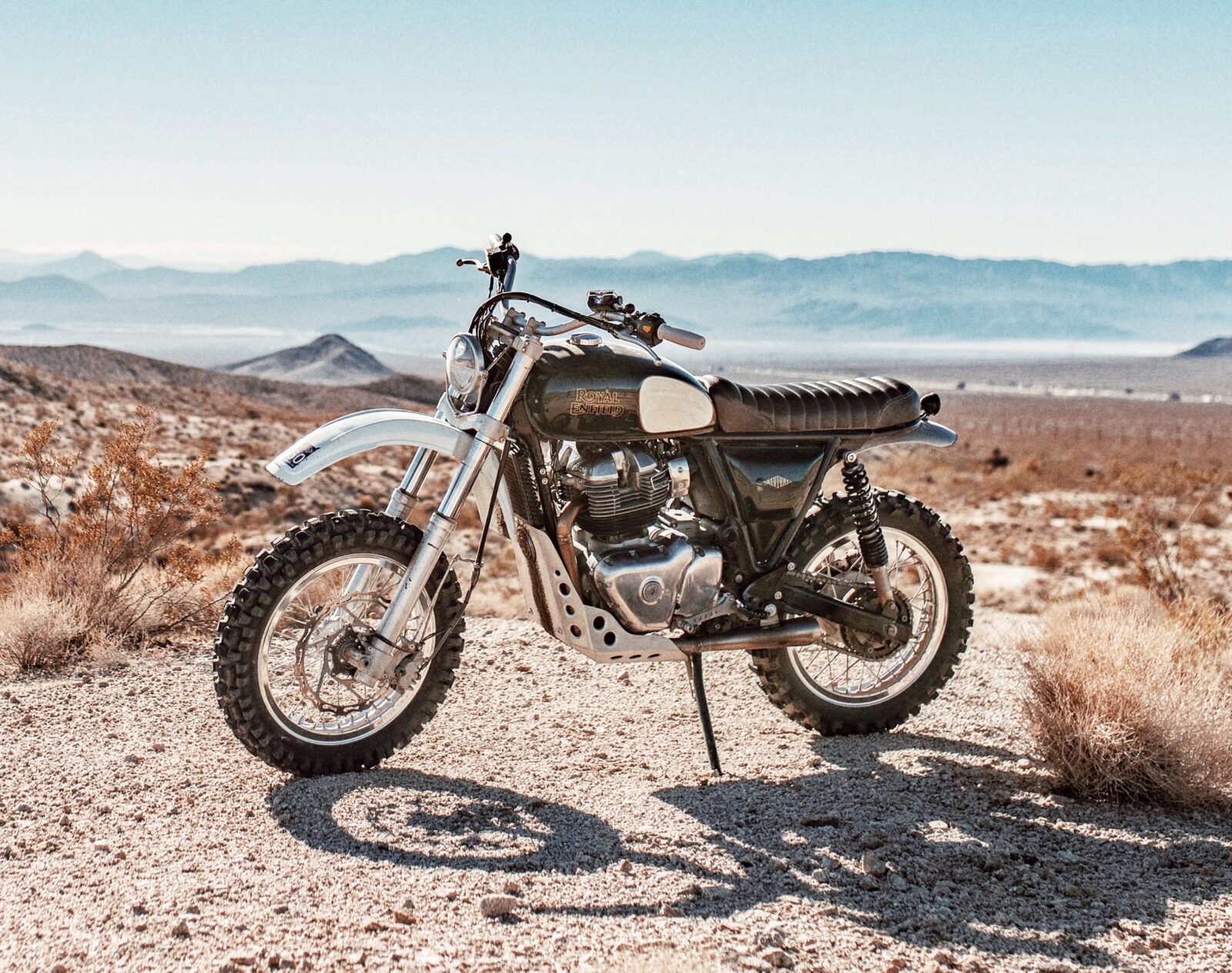 The Desert Runner is one of the most consequential custom motorcycles built by the team at Revival Cycles, in order to build it they were shipped an unreleased Royal Enfield Interceptor from the factory under cover of night in the back of an unmarked truck. This bike and the work around it had to remain a need-to-know Skunkworks project until the model had been publicly unveiled.

The Interceptor is a critically important bike for Royal Enfield, it’s powered by the all-new 650cc parallel twin that is going to power the company well into the 21st century. Royal Enfield proudly call themselves “the oldest global motorcycle brand in continuous production” and if you’ve ever been to India you’ll have likely seen hundreds (perhaps thousands) of them weaving through the country’s notorious traffic.

The company is now Indian-owned and has been since 1994, it started out as a British company all the way back in 1901 to manufacture bicycles, lawnmowers, stationary engines, and of course, motorcycles. The the years shortly after WWII the company began supplying the Royal Enfield Bullet to the Indian military, over time production was moved to India, and the Bullet quickly became one of the most prolific motorcycles in the country. 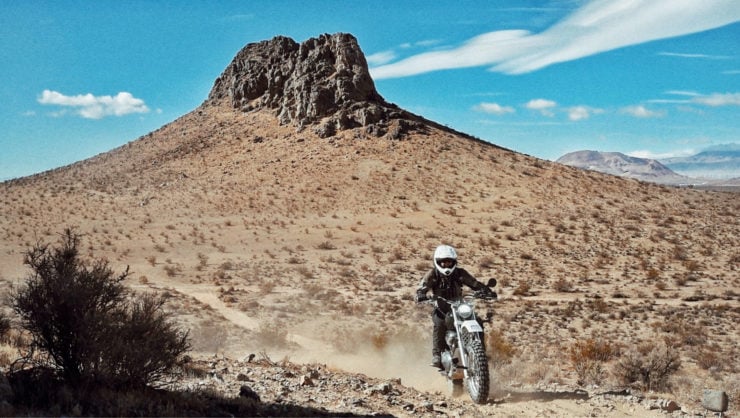 In recent years the company has begun looking overseas to compete more on the world stage. The 350cc and 500cc Royal Enfield Bullets are both popular and inexpensive, but to really compete the company knew they needed something that combined their heritage with some more modern engineering – thus was born the new 650.

The Royal Enfield Interceptor was targeted directly at the likes of Triumph to compete in the popular modern classic motorcycle genre. It has retro styling, an air-cooled parallel twin, and a price point that’ll make riders sit up and take notice – the bike has already been selling well in many world markets and is becoming a common sight on the road in some cities.

The project to built he Royal Enfield Interceptor Desert Runner was hatched in secret behind comprehensive NDAs, the goal of the project was to showcase the new engine, but it had to be kept out of public view until the motorcycle was officially released.

The team at Revival Cycles got to work on the Interceptor as soon as it arrived, they took a long hard look at the new model and realised it had more than a little in common with the legendary British desert sleds of the 1950s and 1960s. Many if not most of which were 650cc parallel twins with air-cooling that had started out as road bikes before being modified for desert racing duties.

Rather than just building a motorcycle that looked like a desert sled they wanted to actually build a capable off-road racer, so they planned to enter the completed bike into the LA-Barstow to Vegas race.

The project started with a full strip down and an inspection, it was clear that the road-specific suspension would need to be replaced, and a slew of other mods would be needed before any desert racing could be undertaken. First up, a set of Suzuki DR-Z forks with upgraded springs were fitted up front paired with custom-built Icon gas-shocks in the rear – this elevated the bike significantly for improved ground clearance and suspension travel.

A pair of matching shouldered alloy 18 x 3.5 wheels were then fitted and shod with Michelin AC10 tires. The original handlebars were removed and replaced with a set of solid aluminium flat track bars designed not to bend in accidents so the bike remains rideable. The team then designed and machined a chain roller and spring-loaded arm to deal with chain tension issues. 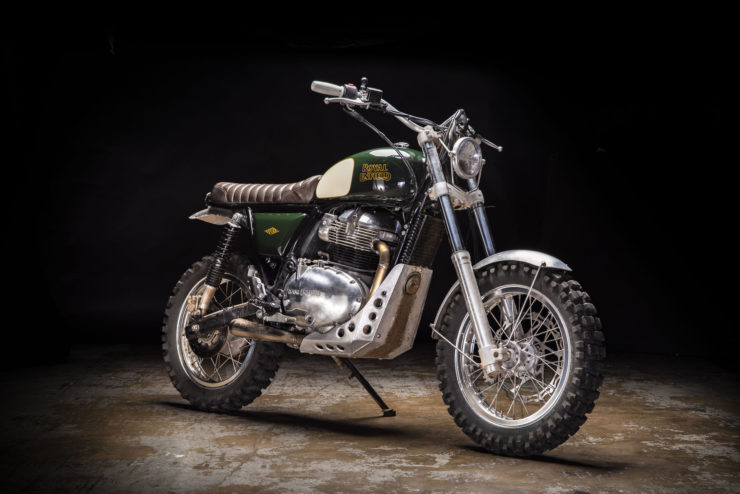 The a new alloy sump guard was fabricated and fitted under the engine, it was designed to provide enough space for the custom stainless exhaust system under the engine, rather than having the exhaust run down the side of the bike and risk burns and other issues.

A custom set of CRF450 motocross pegs by IMS were installed along with a newly fabricated headlight bracket with a bulletproof LED headlight. A compact Motogadget LED Motoscope pro gauge was also fitted and they fabricated two front fenders, one high up for competition use and a lower aluminium one for road use.

The team then shortened the rear frame hoop and slotted in a custom high mount alloy fender with a small vintage LED taillight – the bike was then completed with a Revival Limited one off bespoke leather seat. The bike made its run in the LA-Barstow to Vegas race and it was recently put through its paces at the Spoaks MotoPark in Texas.

Revival Cycles are now taking orders from people who want their own Desert Runner, they can build it like this one or to your own specifications, you can click here to visit their website.

Alan Stulberg’s love of motorcycles started at age five, after his grandfather gave him a tiny Honda. He’d ride it around the family Texan ranch to escape his twin brother. He was hooked. In 2008, 28 years later, he founded Revival Cycles after leaving a tech job, working out of a friend, and now head mechanic, Chris Davis’s, back yard.

He quickly outgrew Chris’s hospitality and moved into a single bay East Austin workshop. The company has grown from a one man band, into a global brand, occupying five bays and employing north of thirty people. Revival builds custom bikes, restores rare vintage machines, and maintains significant collections for clients.

Revival has a leather workshop that handcrafts leather accessories. The company also has a thriving web-sales parts department with comprehensive technical support, and a retail store on Austin’s premier strip, South Congress. Revival’s Handbuilt Motorcycle Show draws 25,000 gearheads to Austin every April to marvel at one another’s functional works of art.

“You know…I meet people every day who say they are going to do something, and to meet someone who has actually done it is truly impressive” – Jay Leno

“No corners are cut and no compromises are tolerated in their single-minded pursuit of being the best of everything the Company undertakes under its brand name. This work ethic is both old-fashioned and refreshingly new at the same time” – Bobby Haas 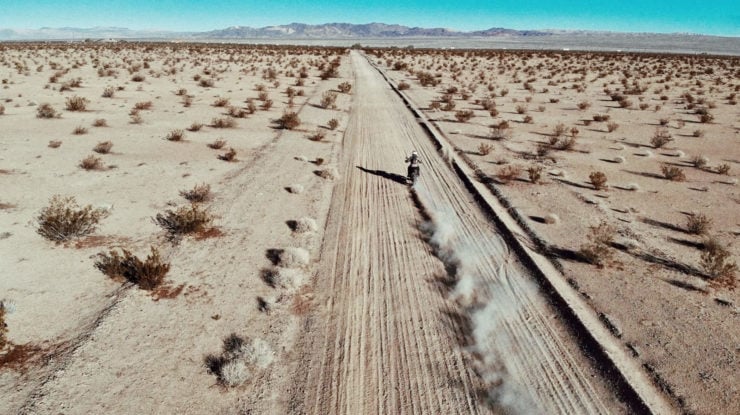 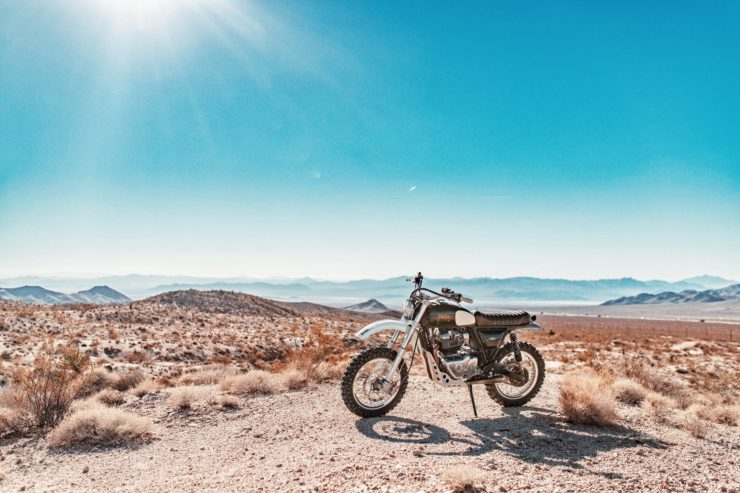 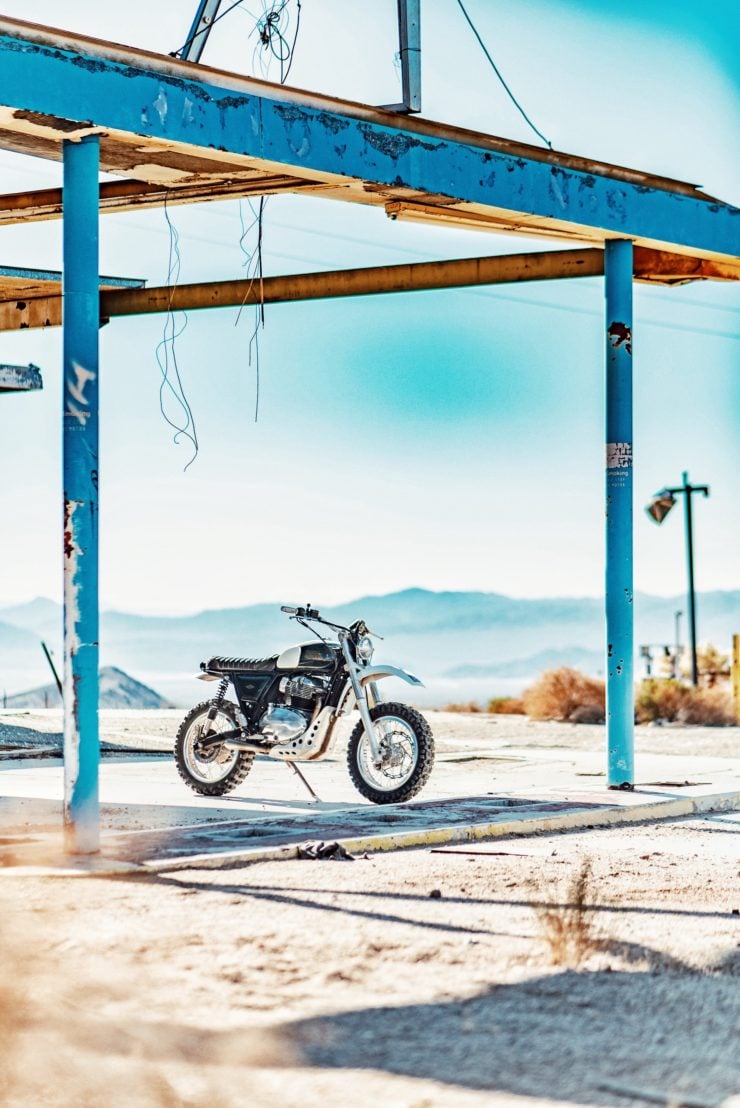 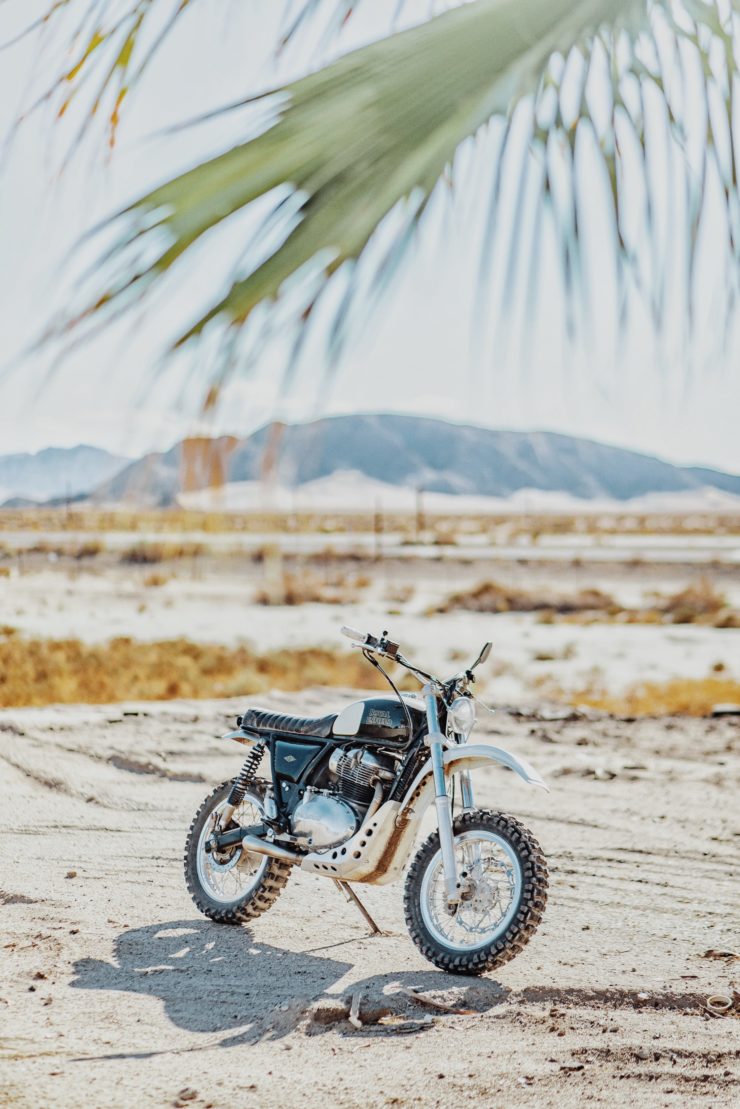 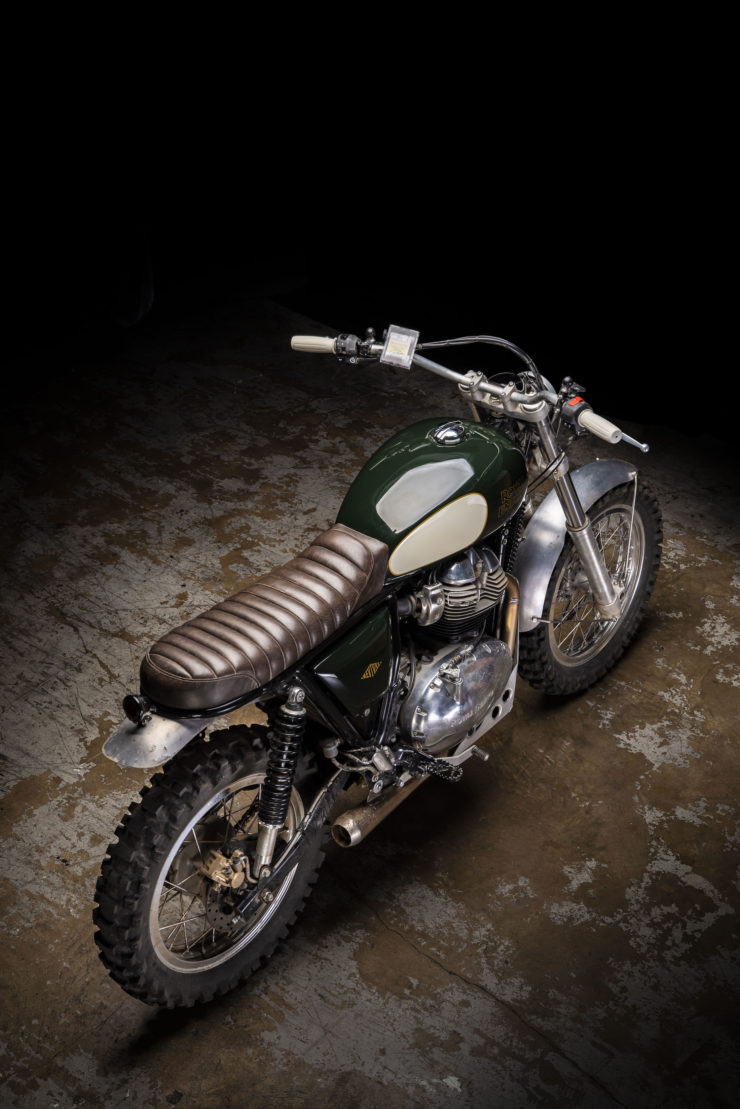 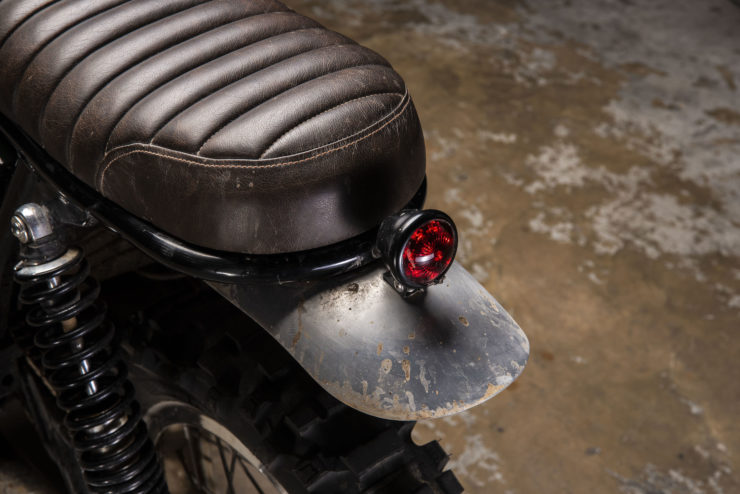 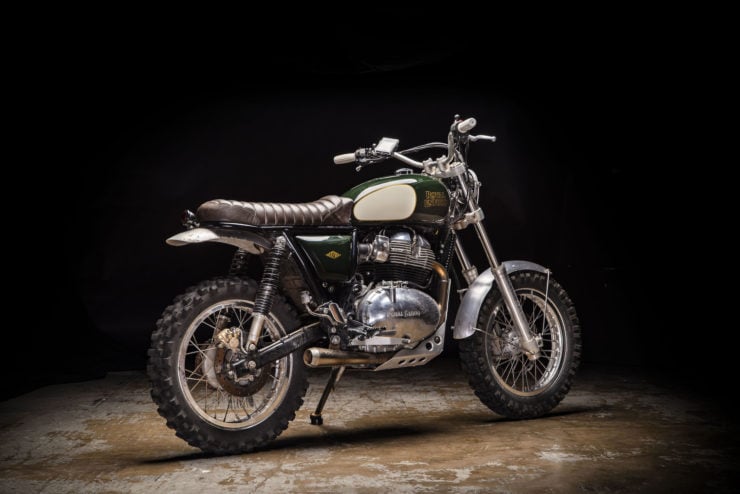 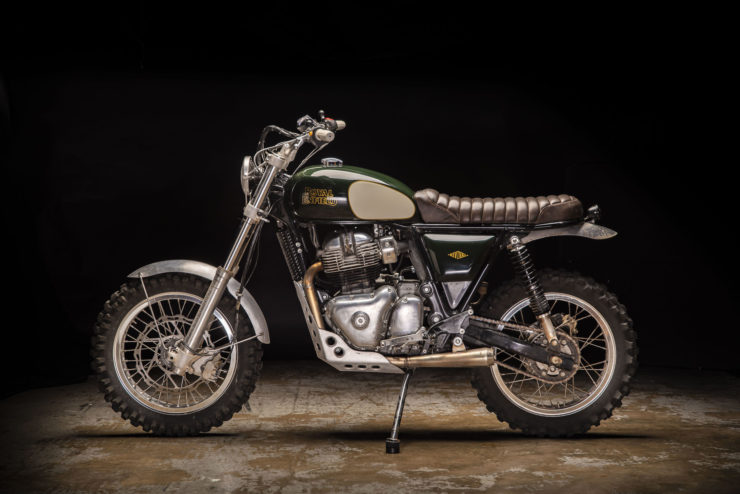 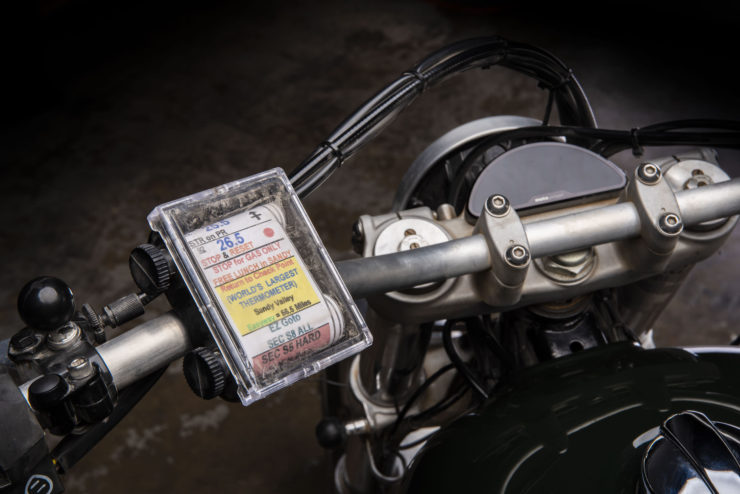 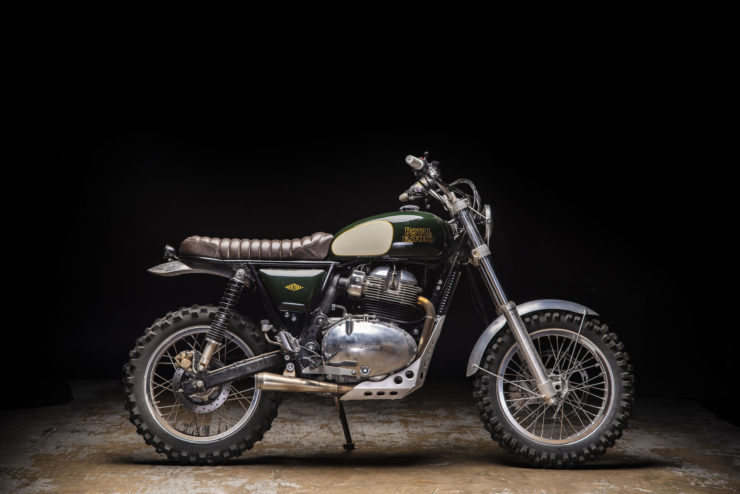