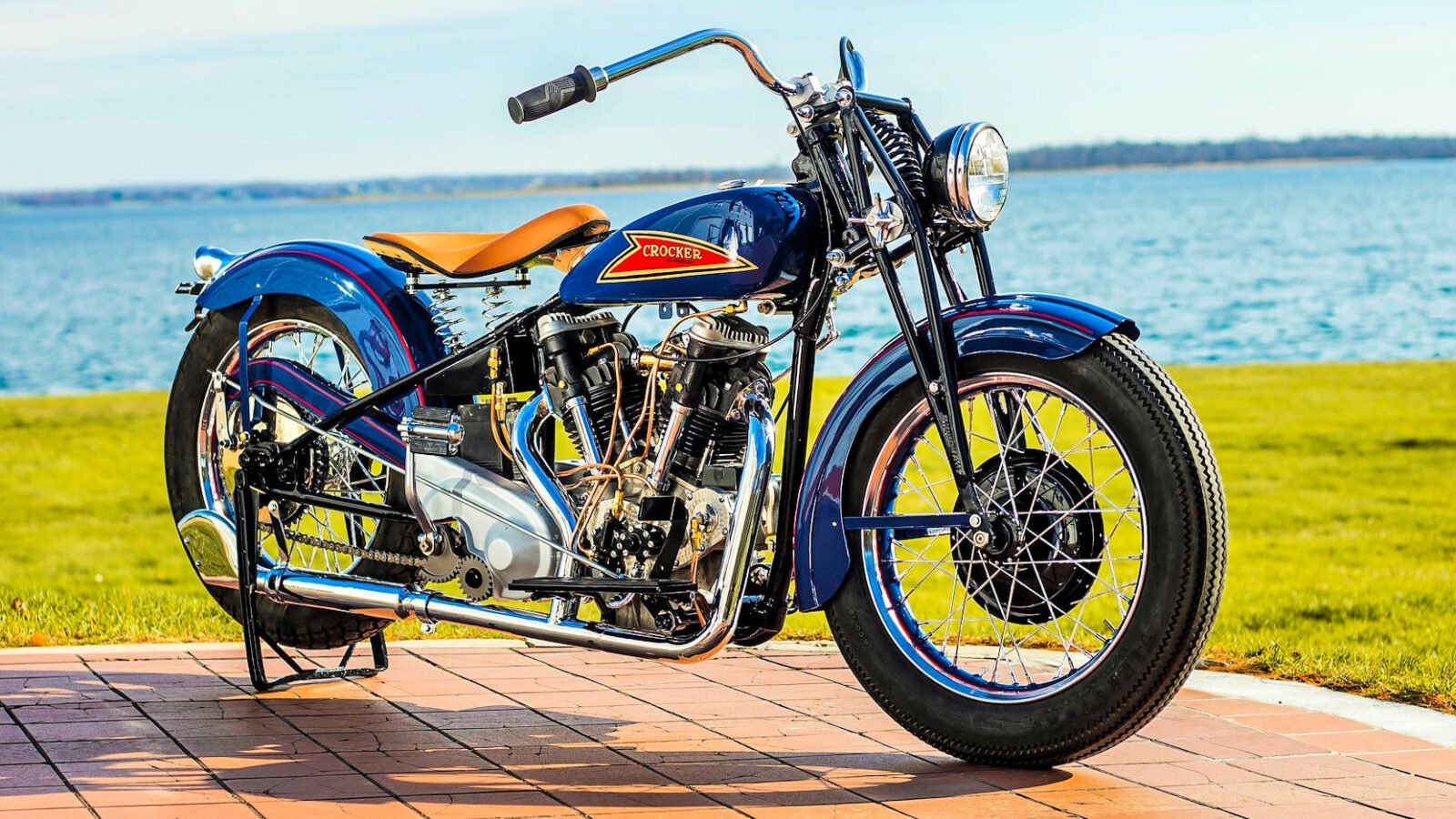 Rare surviving Crocker V-twins are now the most valuable American motorcycles ever made, they sit shoulder to shoulder with the legendary machines from Brough Superior and Vincent as the most desirable collector motorcycles of all time.

In the world of motorcycles very few have values exceeding $100,000 USD, so Crockers with the values extending $750,000 USD and upwards are something of an anomaly. When Al Crocker first started out building speedway bikes to his own design in 1933 he could never have imagined that almost 100 years later, motorcycles bearing his name would be worth close to a cool million.

Al Crocker was born in the United States in 1882, once he left school he earned an engineering degree from Northwestern University’s “Armour Institute”, after graduation he went to work for Thor motorcycles.

Over the course of his early career he would work for both Thor and Hendee Manufacturing Co, better known today as Indian Motorcycles, and he would prove to be a successful racer in his own right. 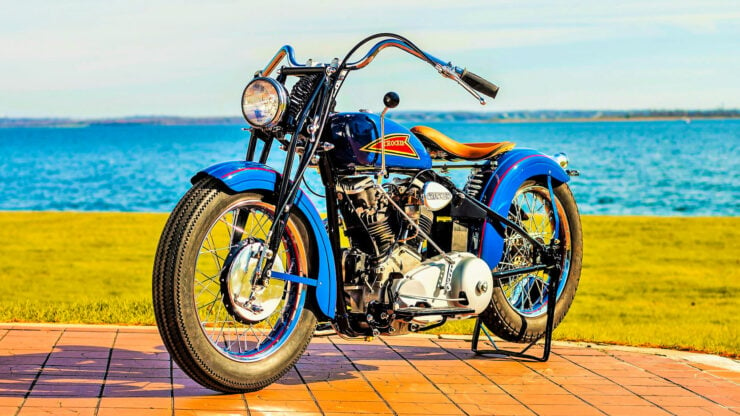 Above Image: Crocker V-twins are elegant machines that have the undeniable DNA of a mid-century American motorcycle.

As is often the case, those rare individuals with a head for engineering and a heart for racing prove to be wildly successful at designing and building racing vehicles themselves. People like Enzo Ferrari, Bruce McLaren, and the subject of this article, Al Crocker.

Crocker’s first foray into designing his own motorcyles – including both the engine and the frame – was the single-cylinder 500cc (30.50ci) OHV Crocker speedway racer. This motorcycle was developed with Paul Bigsby, a man who would later become famous for creating the unique Bigsby “Whammy Bar” or Bigsby vibrato tailpiece for electric guitars.

The first race outing for the new Crocker speedway bikes almost couldn’t have gone any better than it did. Crocker riders won 9 of 12 heats in one evening, resulting in the breathless quote about the new motorcycles by The Motorcyclist below courtesy of The Vintagent:

“…two spotless and keen pieces of racing equipment surely worthy of the best the country had to offer as their pilots. The first race was ridden by Jack Milne…speedman par excellence…and Cordy Milne…. Two American-built night speedway racing engines swept the boards… 9 first places and 3 second spots out of 12 starts… The call came suddenly for the builder, for Al Crocker who was in the pits… [He] came to the microphone. His speech was short, brief; just the sort of thing that the situation called for… He was glad that they [the bikes] were good… They would be better.” – The Motorcyclist (December, 1933) 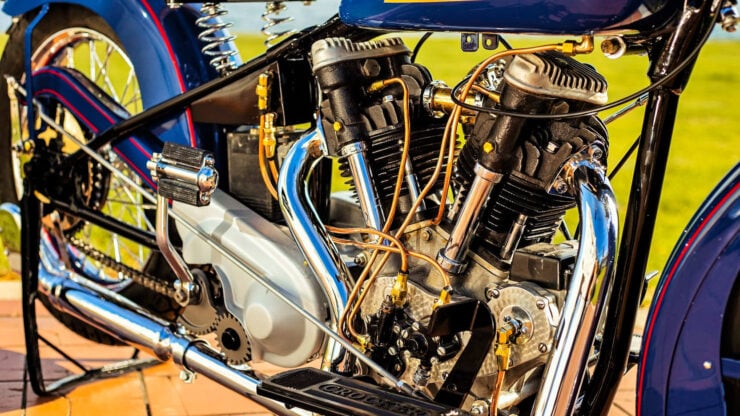 Above Image: Every Crocker was built to order, and no two are the same. Engines could be ordered from 1,000cc all the way up to 1,490cc.

After approximately 31 Crocker speedway bikes had been built, Al turned his attention to developing a large displacement V-twin road-going motorcycle to compete with, and beat, the best being turned out by Harley-Davidson and his old chums over at Indian.

Crocker and Bigsby worked closely together developing an all-new, air-cooled 45º V-twin with hemispherical OHV cylinder heads, a famously tough 3-speed gearbox, a bore x stroke of 3.25″ x 3.62″, with a total displacement of 62 cu. in. or 1,016cc.

Each Crocker was built to customer specification with engine capacity and power output varying considerably – Crocker V-twins could be ordered from 1,000cc all the way up to 1,490cc and the standard engine was capable of 60 hp. Al Crocker was so confident that his motorcycles were the best in the country that he offered a money back guarantee to any rider who was beaten by an Indian or a Harley-Davidson.

No one ever came looking for that refund. 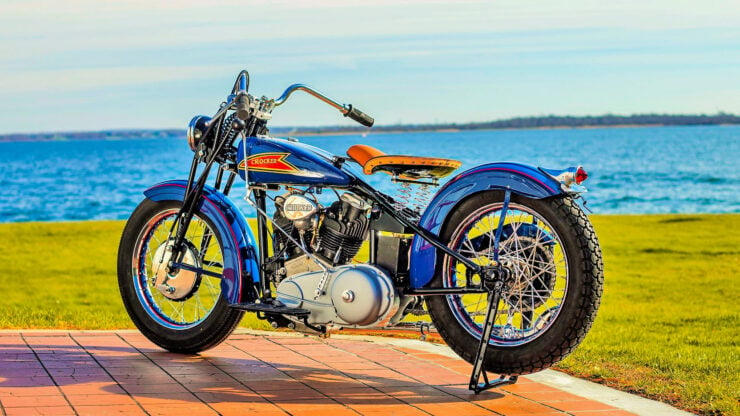 Above Image: Hemi-head Crockers like this are said to be capable of speeds in excess of 110 mph.

Every Crocker was slightly different but there were two major iterations, the small tank and big tank variants, referencing their fuel tank type and size. Today there are 68 known surviving Crocker V-twins and they’re among the most valuable motorcycles in the world. In 2019 a 1936 Crocker Small Tank sold for a new record of $750,000 USD.

Even among motorcycles as rare as Crockers there are a few that are extra special, and this is one such example. It’s perhaps better known as “Dale’s Burnout Special”, which is one of the greatest names for a motorcycle I’ve ever heard.

The nickname comes from Dale Walksler, the founder and curator of the Wheels Through Time Museum in Maggie Valley, North Carolina. No matter how old they are, every single motorcycle in Dale’s museum runs, and he regularly starts them up and lets people hear them in person – an experience you can’t really translate through video or the written word.

This Crocker became known as the burnout special because, as you may have guessed, Dale used to do burnouts on it to showcase the bike’s prodigious power to museum guests. The bike now benefits from a fresh, extensive restoration and it’s due to cross the auction block with Mecum in Las Vegas in late April. 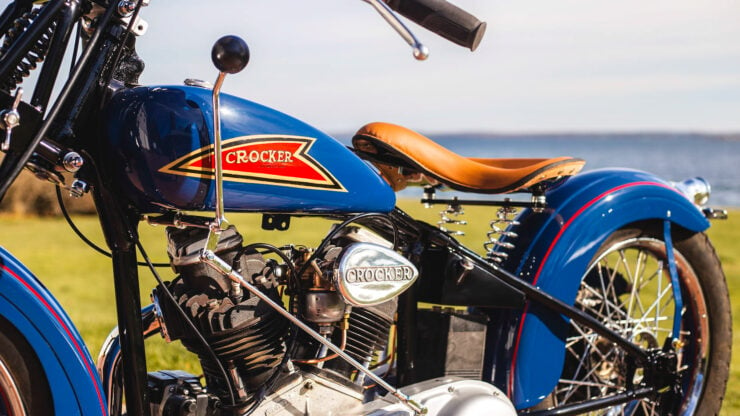 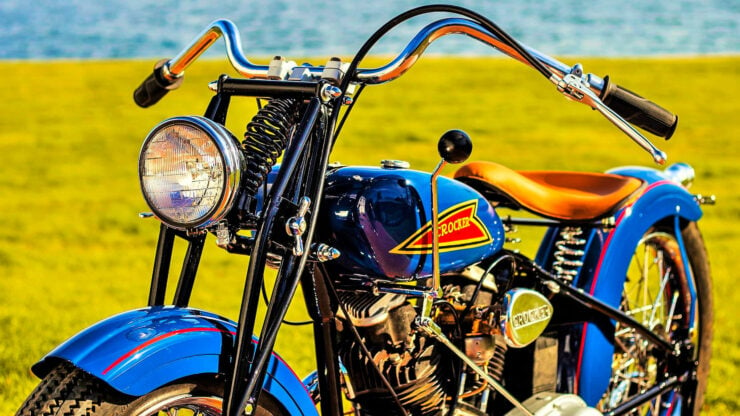 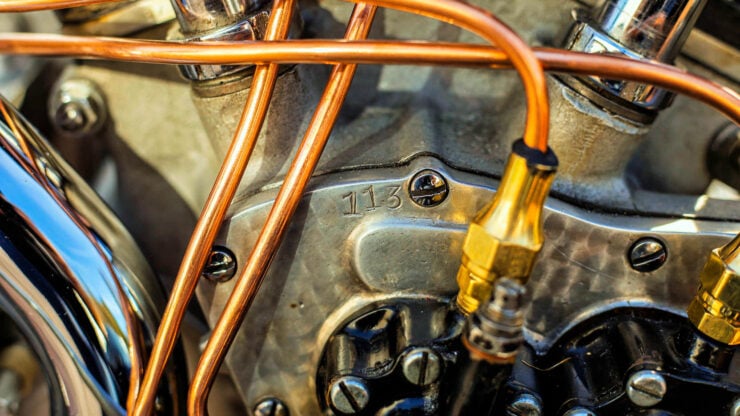 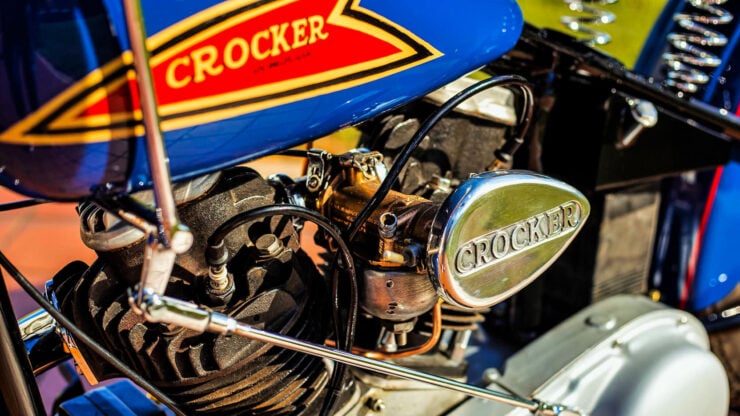 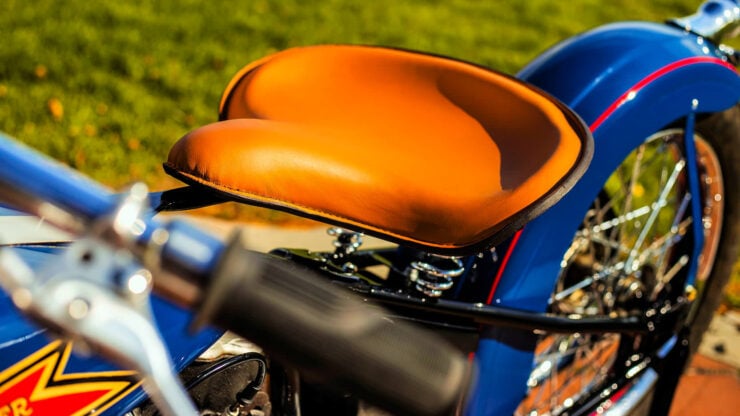 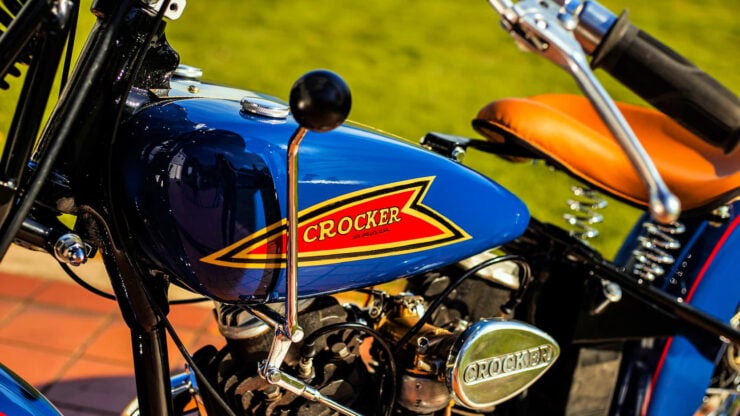 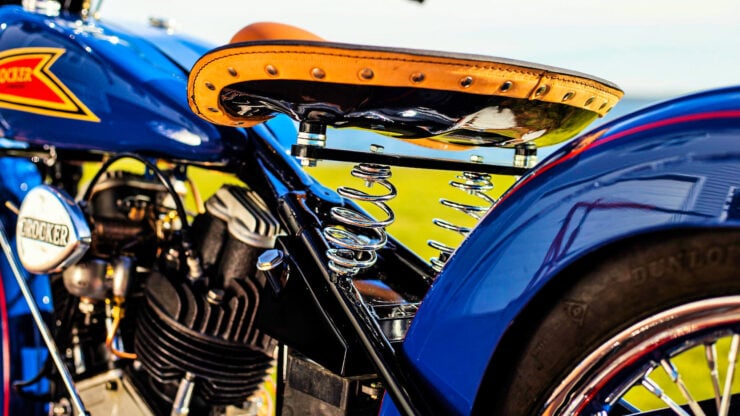 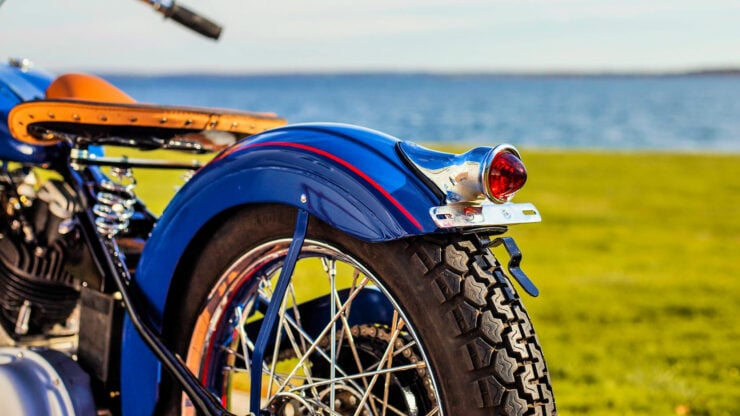 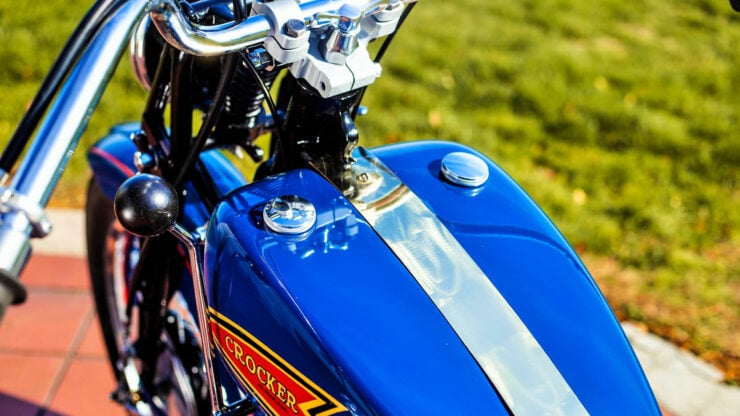 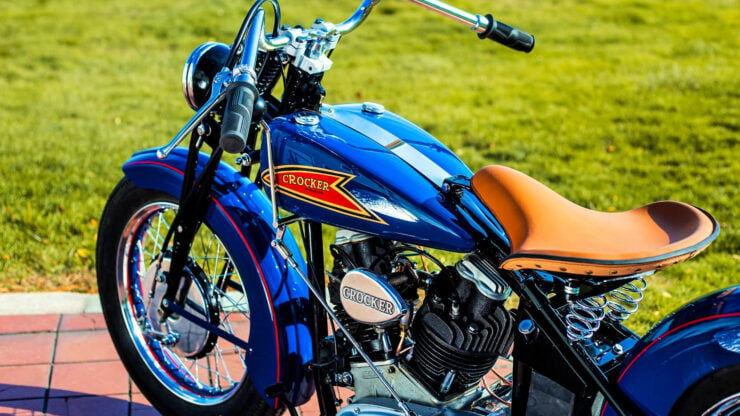 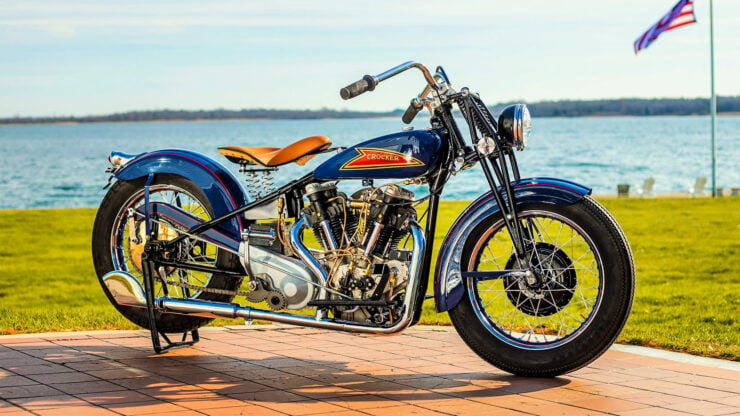