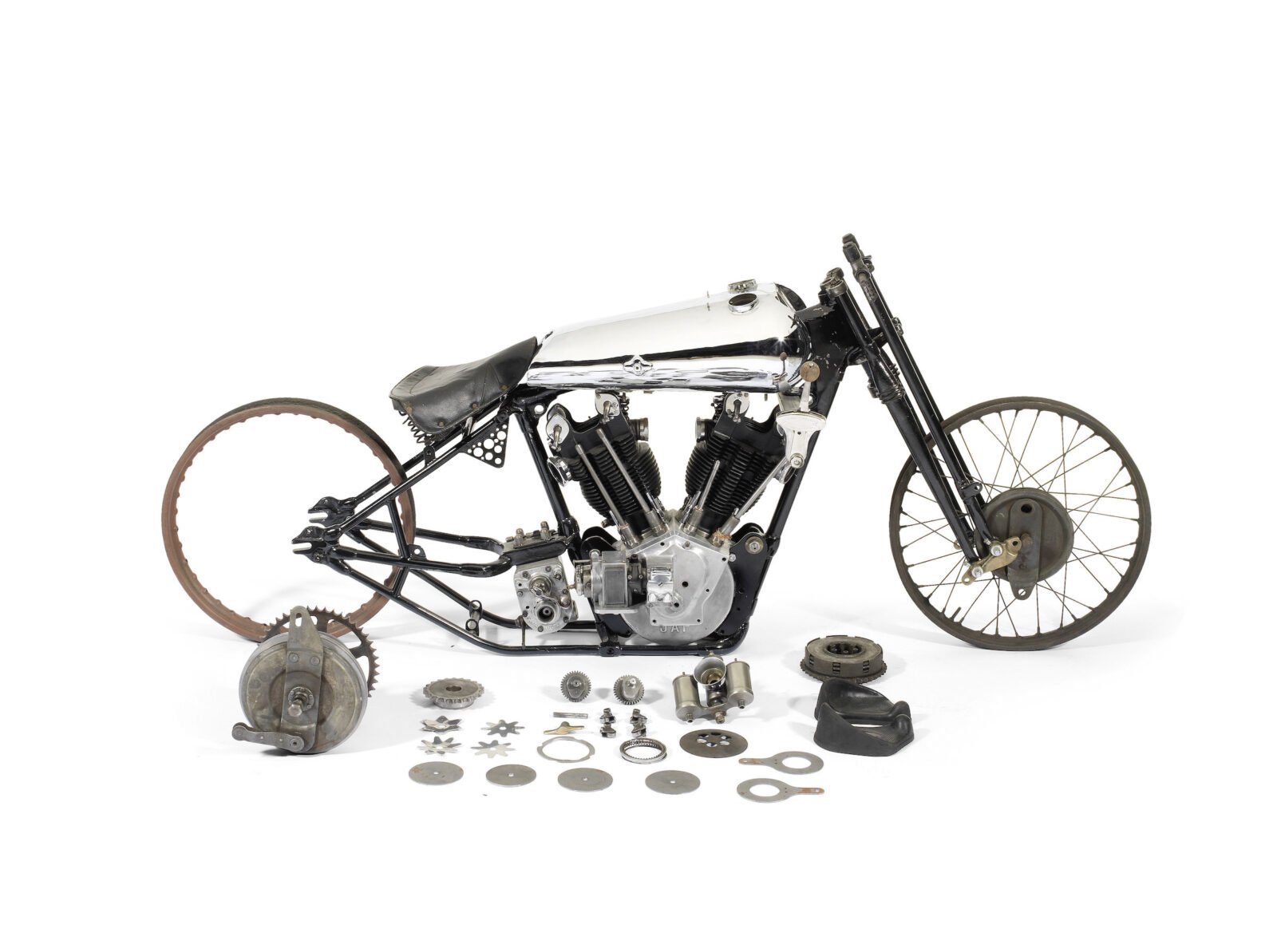 The Pendine SS100 was Brough Superior’s top of the range motorcycle when it was released in 1927. It was fitted with a special JAP KTOR 8/45 hp V-twin engine with four-cams, a bevel-drive magneto, and a number of other performance enhancements that meant it was capable of a guaranteed top speed of 110 mph. A ludicrous speed for the late 1920s, particularly when you consider the tires, brakes, suspension being used. Not to mention the somewhat haphazard condition of the roads.

The Brough Superior SS100 Pendine engine/gearbox you see here are factory originals that were delivered to a customer in Melbourne, Australia on the 28th of February 1927. Over the years the frame and engine/gearbox became separated, however the original frame now lives in Japan and has a replica engine fitted. The frame you see here is a replica, and it’s clearly being offered as an unfinished, although very promising project motorcycle for somebody with the requisite talent and financial means.

A Brief History of the Brough Superior

The Brough Superior SS100 is a motorcycle that needs no introduction to anyone with even a passing interest in motorcycle history. Although the term “superbike” wouldn’t be coined for many more decades, the SS100 was unquestionably the first real superbike. George Brough proudly introduced the SS100 in 1924, the name stands for Super Sport and the 100 is a reference to the motorcycle’s top speed – a guaranteed 100 mph.

Each Brough (pronounced “bruff”) was built from the very finest parts available in England and marketed as the “Rolls-Royce of Motorcycles” – a comparison that had been first used by a motoring journalist during a test ride. In later years Brough received an official approval from a Rolls-Royce executive to use the term, after he’d been impressed during a tour of the Brough Superior factory.

Perhaps most the most famous Brough Superior customer was T. E. Lawrence (otherwise known as Lawrence of Arabia) who owned a number of Broughs, including three SS80s and at least two SS100s. Lawrence was killed tragically while riding one of his SS100s, he swerved to avoid two young boys who were in the road, saving their lives but costing him his own.

The SS100 would stay in production from 1924 till 1940, switching from JAP (J. A. Prestwich) engines to Matchless engines in 1936. Early bikes used Sturmey-Archer 3-speed gearboxes, and post-1936 models were fitted with 4-speed Norton gearboxes. Each bike was tailored to its new owner, and customers were encouraged to suggest custom additions and modifications. Handlebars were shaped for each individual client’s arm length and riding posture, to ensure they’d be comfortable on longer rides.

The Brough Superiors that have survived to the modern day are now amongst the most valuable motorcycles in the world. In recent years the company has been brought back, and it’s now producing an all-new version of the SS100, with a price tag in exactly the sort of range you’d expect. 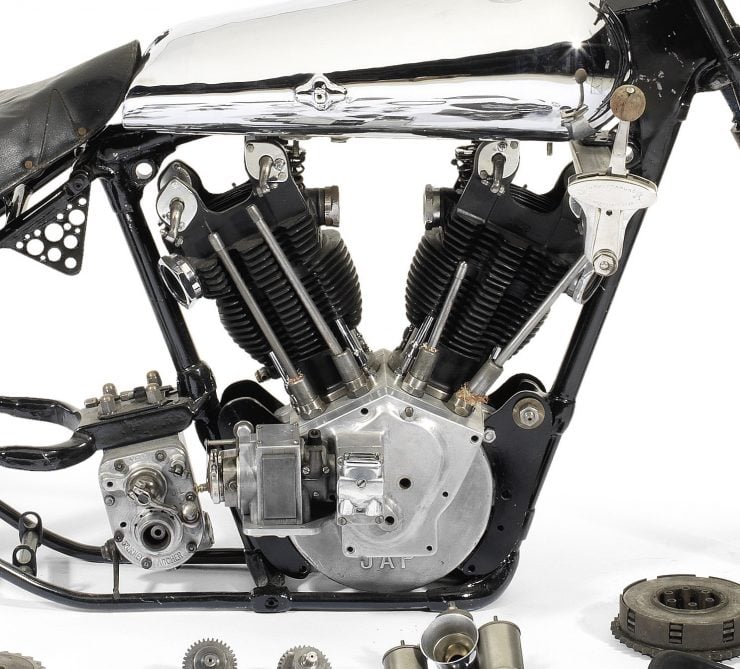 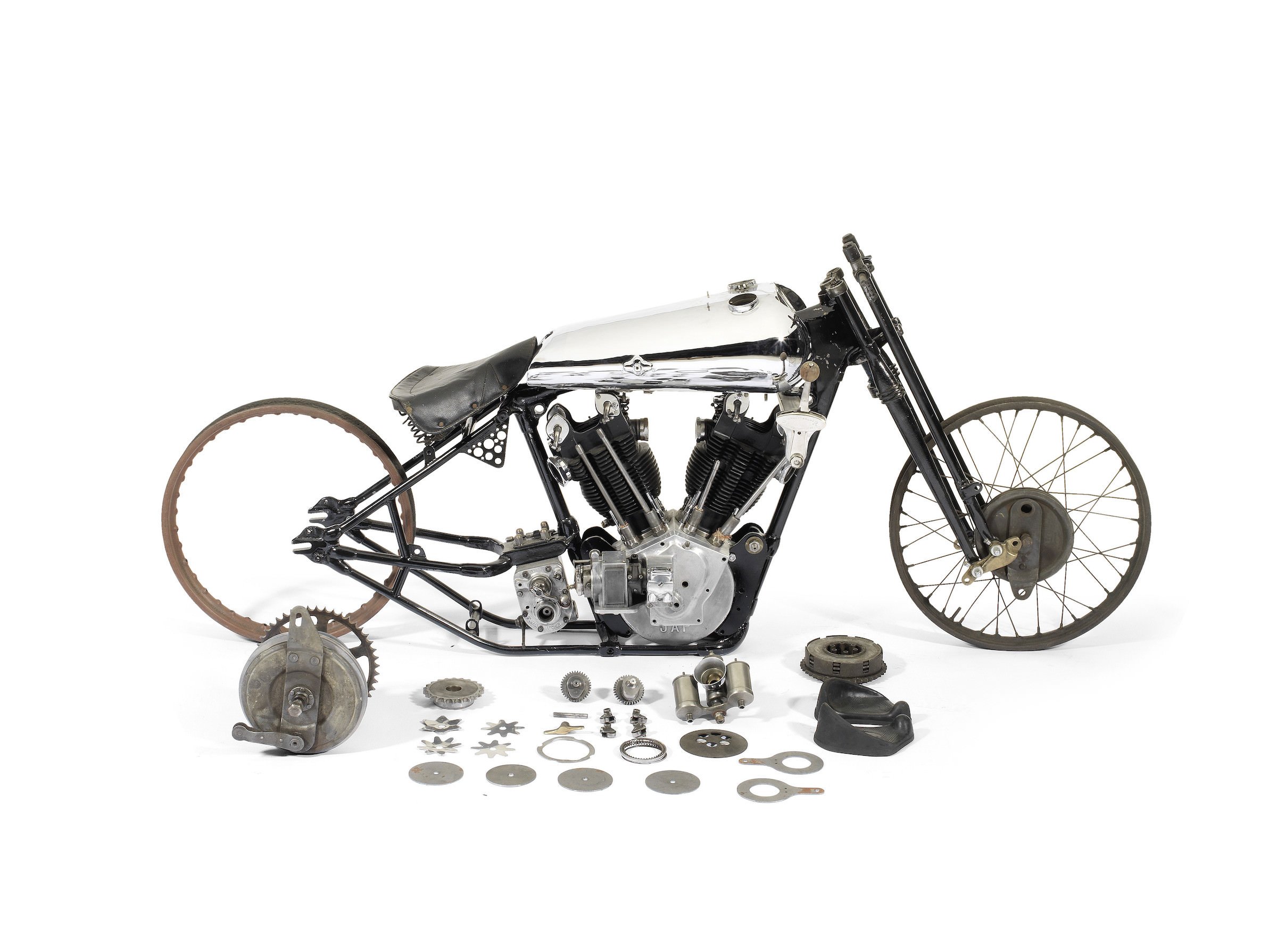