A Brief History of the Kawasaki KLR650 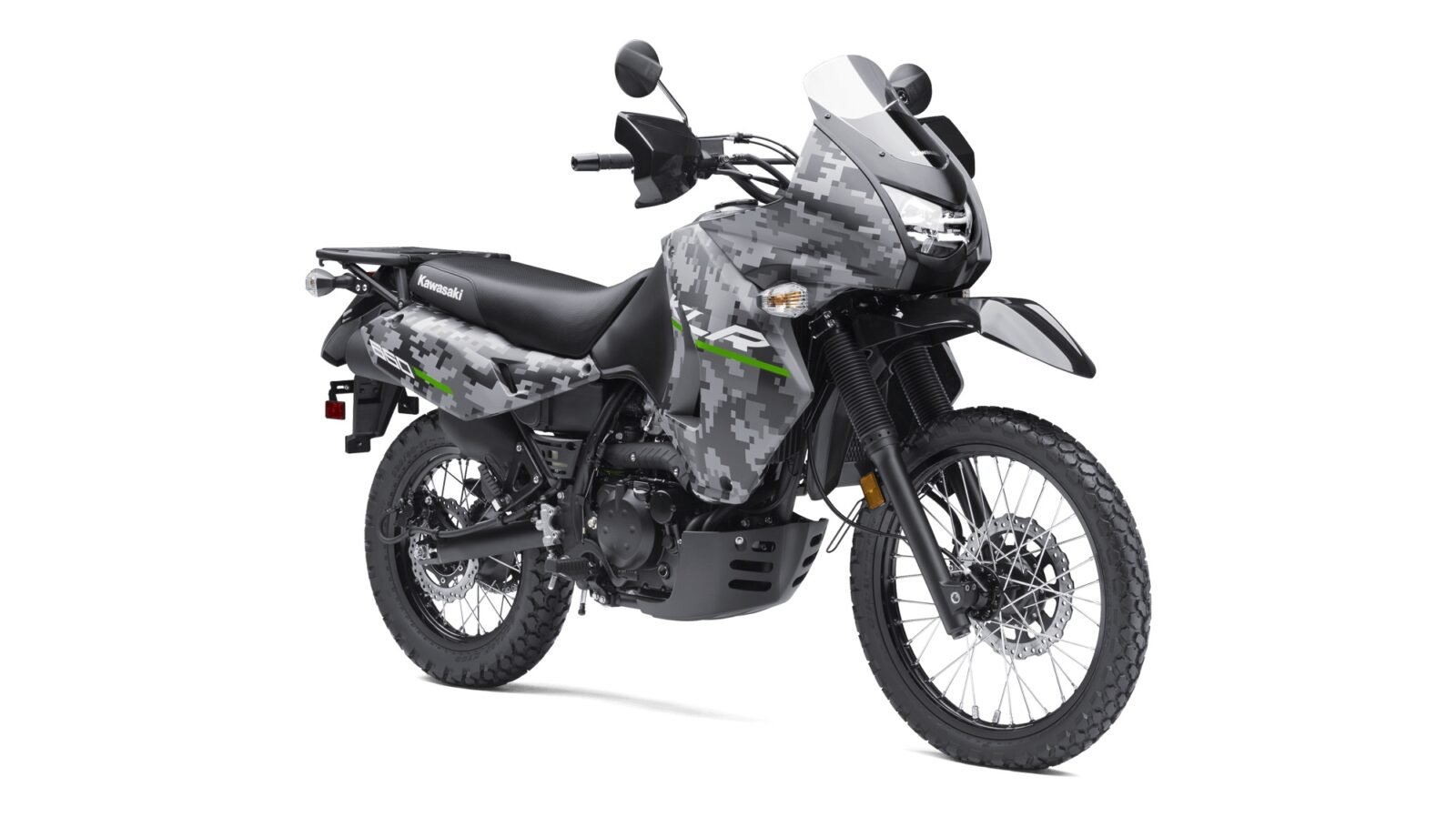 The Kawasaki KLR650 was such a good multi-purpose motorcycle that it was used by the Marines and formed the basis for the US Marines M1030M1 motorcycle created by the folks at Hayes Diversified Technologies. The Kawasaki KLR650 is a bike that Kawasaki got right all the way back in 1987 and had no need for a major upgrade version until 2008. It “wasn’t broke” and so Kawasaki wisely chose not to fix it. Kawasaki initially offered the KLR650 as a dual sport motorcycle for surfaced and unsurfaced roads and tracks.

It was not actually designed to be an all-out off road bike but rather a bike that could be used all week for the daily commute and taken for off the beaten track adventures on weekends or vacations. In fact this bike fulfilled this role so well that some intrepid explorers used their Kawasaki KLR650 for trans-continental and around the world trips. It has been a bike that proved itself to be reliable, mostly bulletproof, reasonably comfortable, and cheap. 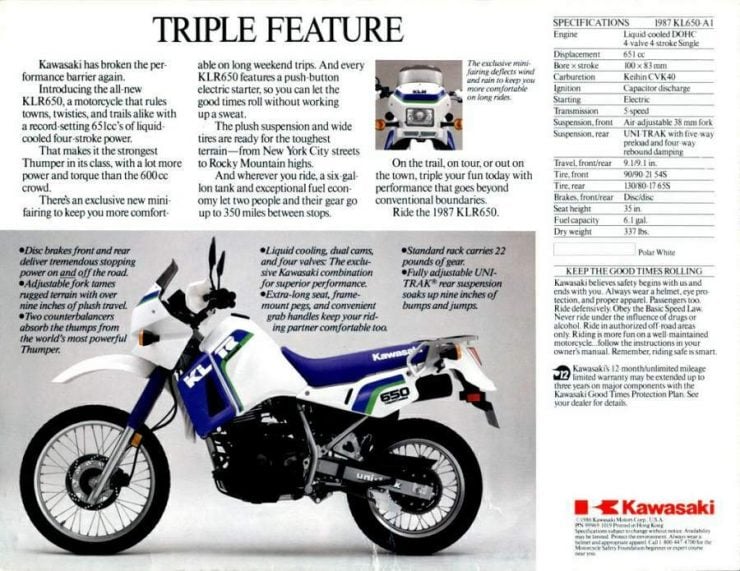 The KLR650-A was the first model introduced in 1987 and based on the KLR600 which had been in production from 1984-1986. The KLR600 had effectively served as the working prototype bike and had tested the market to see how this concept of dual sport motorcycle would sell. When introduced in 1987 the KLR650 featured a liquid-cooled 651cc single cylinder “thumper” engine, but with excellent counter-balancing. This engine put out an adequate 37bhp.

The single cylinder engine had double overhead camshafts to operate the double valves (i.e. four valves for the single cylinder). Compression ratio was 9.5:1. Transmission was a conventional five speed with chain drive. Top gear being fairly tall for the bike but good for long distance highway cruising. The frame of the KLR650-A was a steel, semi-double cradle type with front forks raked at 28° and a rear mono shock swing arm. Front suspension travel was 220mm and at the rear 200mm to soak up the potholes nicely. Brakes were discs front and rear.

At the front was a single 280mm disc with a 240mm at the back. Front wheels were 21” fitted with 90/90 R21 tires and at the rear a 17” wheel with 130/80 rubber. The brakes did not have ABS and proved adequate but not impressive. They were one of the items that would be improved on the 2008 KLR650-E. The fuel tank of the KLR650-A held a sufficient 23 liters (6.1 US gallons) of gasoline giving the bike a good range for weekend adventures, around the world expeditions, and all the shades in between. The KLR650 had one other great advantage going for it – it was cheap. This was a bike of which one reviewer said “…it’s comfortable, grunty, quiet and reliable.

Forget your fancy-pants BMW R1200GS’ – providing you can live with adjusting and lubing a chain the Kawasaki KLR650 is at least as good at over-landing and a mere fraction of the price.” In short, it was a lot of bike for not a lot of money. It was not fancy, but it was cheap. A fun bike that was like a Swiss Army Knife of motorcycles. 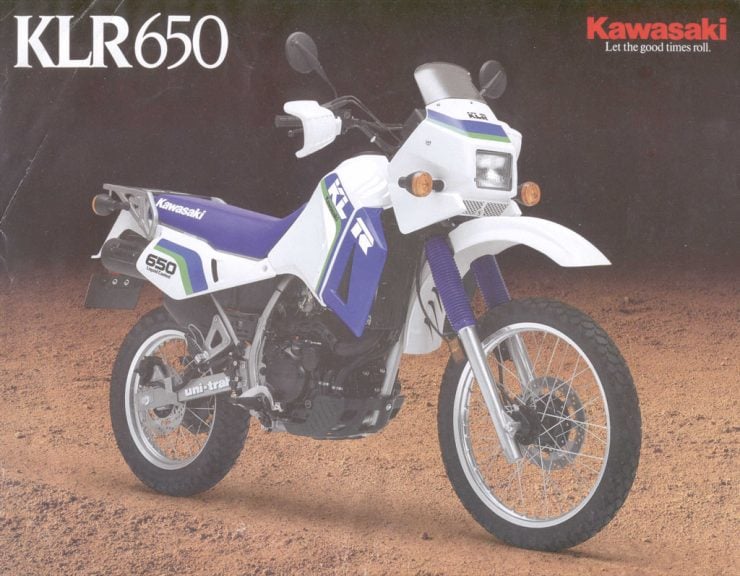 In 1990 Kawasaki decided to bring a more exciting version of the plain Jane standard version so they created the “Tengai”. In Japanese “Tengai” is translated “The End of The Sky.” The KLR650-B Tengai was made to look a bit like a Paris-Dakar racer.

No doubt it was intended to compete head to head with the Honda Africa Twin, BMW’s R1200GS, the Ducati Multistrada, and the Triumph Tiger Explorer, all of which were exciting long distance adventure bikes, but to do it at a rather lower price point. The KLR650-B Tengai was given a full front fairing that blended into the fuel tank, much like the Honda Africa, new side panels and an unsprung front mudguard. This bike was fancy, and it was still cheap, and just as much fun as its KLR650-A sibling.

The KLR650-C was an extensively modified model which some love and some don’t. This bike was intended more for off-road adventures than the dual sport KLR650-A. The bike was given all new bodywork and a fuel tank of just over half the capacity of the KLR650-A at 14 liters (3.7 US gallons). Despite the smaller fuel tank the dry weight of the bike increased from 337lbs of the KLR650-A to 370lbs for the KLR650-C. With the extra weight Kawasaki decided to upgrade the brakes of the C model with twin pot calipers.

The front forks were increased in diameter to 41mm and given stiffer springs. The rear sub-frame was different to the A model. The bike was also given a durable engine guard to suit its off-road role. The wheels were fitted with steel rims. The instrumentation of the C lacked a temperature gauge being fitted with a simple over temperature warning light. Parts for the KLR650-C can be harder to find than parts for the KLR650-A and not all parts are interchangeable between the two models. 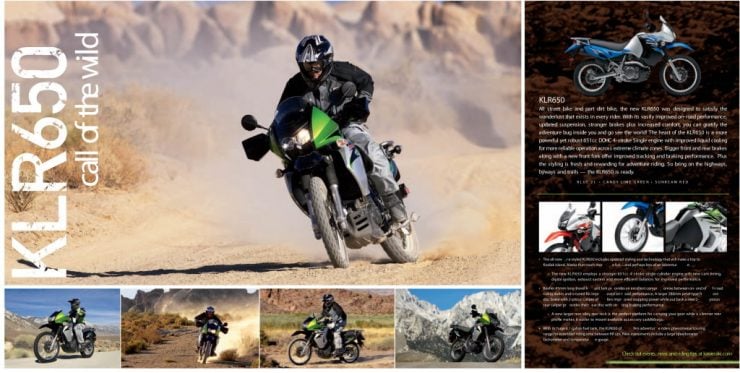 For the 2008 KLR650-E Kawasaki made a point of surveying owners of the older model to fully ascertain what owners liked and what they did not. Kawasaki did not want to go ahead and blindly upgrade the motorcycle based on what they thought would be good, because such uninformed actions can cause a significant loss in sales. Maintaining customer product loyalty is a crucially important thing. The KLR650-E was given much improved brakes with petal style rotors and dual pot calipers, 41mm (1.6in.) forks which provided a bit less travel to improve the bike’s handling. And a new “D” section rear swing arm with UNI-TRAK® single-shock system providing 5-way pre-load and step-less rebound damping. The wheel’s spokes were beefed up with 4mm spokes and the cooling system was improved. It may seem counter intuitive to reduce the front suspension travel and thus improve the bike’s handling but the KLR650-A was known for what one owner has described as “colossal fork dive” which messed up the bike’s braking. Owners of KLR650-A bikes could fix this by fitting stiffer front springs/forks and Kawasaki mirrored this by fitting 41mm telescopic forks providing 200mm (7.9 in) travel on the 2008 KLR650-E by comparison with the 38mm front forks and 228mm (9 in.) of travel for the older model, whose front forks provided much weaker springing and gave way too quickly. Thus less travel equals better handling and more stable braking. The rear suspension travel on the new bike was 185mm (7.3 in.). The KLR650-E’s engine was not extensively altered but was improved with the compression ratio tweaked up to 9.8:1. Fuel/air was delivered by Keihin CVK40 carburettors whilst wheel and tire sizes remained the same. The seat of the KLR650-E was a welcome area of improvement. The new bike got a stepped seat with better padding to provide a nicer long distance ride for riders of all posterior dimensions. About the only criticism was that the front handlebars might be a tad low for tall riders standing on the foot-pegs on very rough tracks. That being said all bike design must contain some compromises to fit human beings of many and varied sizes and shapes. A case of “you can please some of the people all of the time”. Most people find the KLR650-E’s suspension and new seat smooth out the ruts and corrugations so beautifully “it feels like you’re riding on glass”. So perhaps the handlebars are really fine after all. The KLR650-E is a bike that, like its predecessor, just gets honest praise as a well designed and well made “Swiss Army Knife” bike that is mostly bulletproof. And that is all that many riders want. 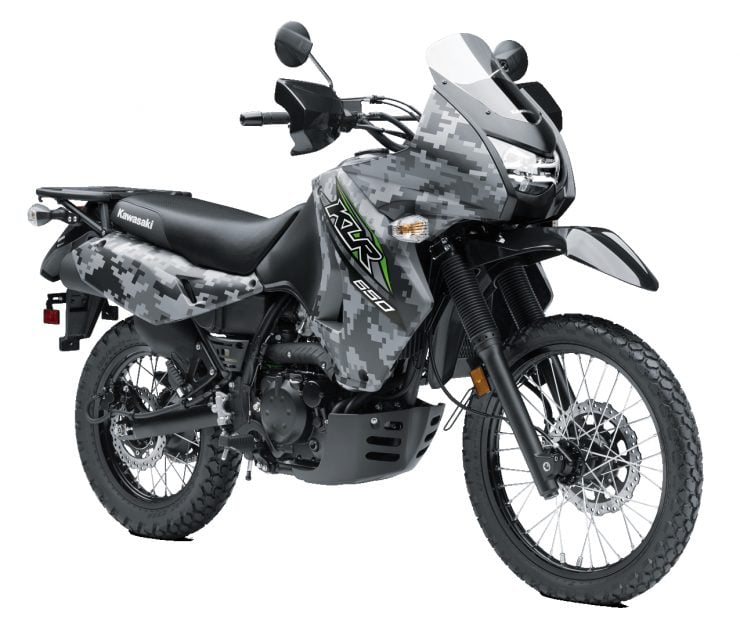 The Kawasaki KLR650 is a bike that the design team at Kawasaki simply got right. They didn’t attempt to create a two wheeled work of road going art. They instead created a practical bike that would go most places competently and they built it so well that its owner would find it to be happily boringly reliable.

Having a bike come to an unexpected stop in the middle of the Taklamakan Desert is not something that even the most intrepid explorer wants to experience and crossing Central Asia was without doubt one of the things Kawasaki built the KLR650 to do, and do it with aplomb. They say “Beauty is in the eye of the beholder” and most would not describe the KLR650 as being a thing of beauty. But as they say, beauty is skin deep.

It is a bike on which you can dream of adventures whilst you are doing your daily commute, knowing you already own the bike for the big journey. It is a bike that does not look fancy, but it is cheap, and very much cheaper than most of the bikes that could compete with it. It is an adventure bike for the adventurous on a budget, and a lot of owners prefer their KLR650 to other more expensive machines. 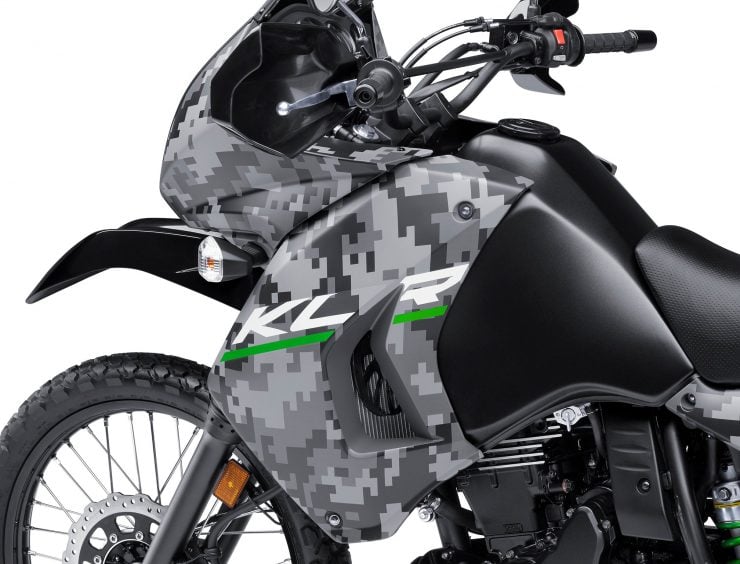 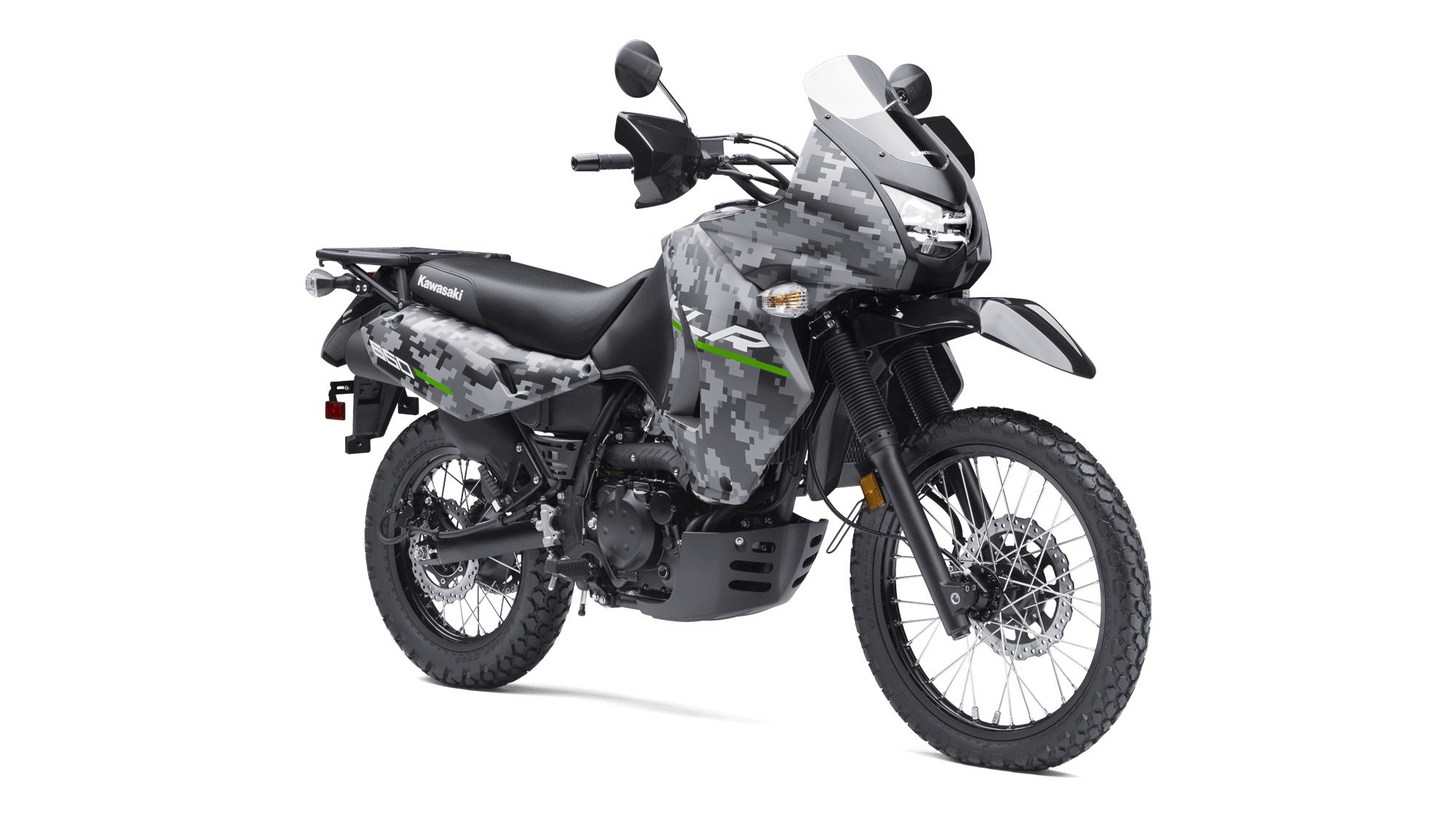