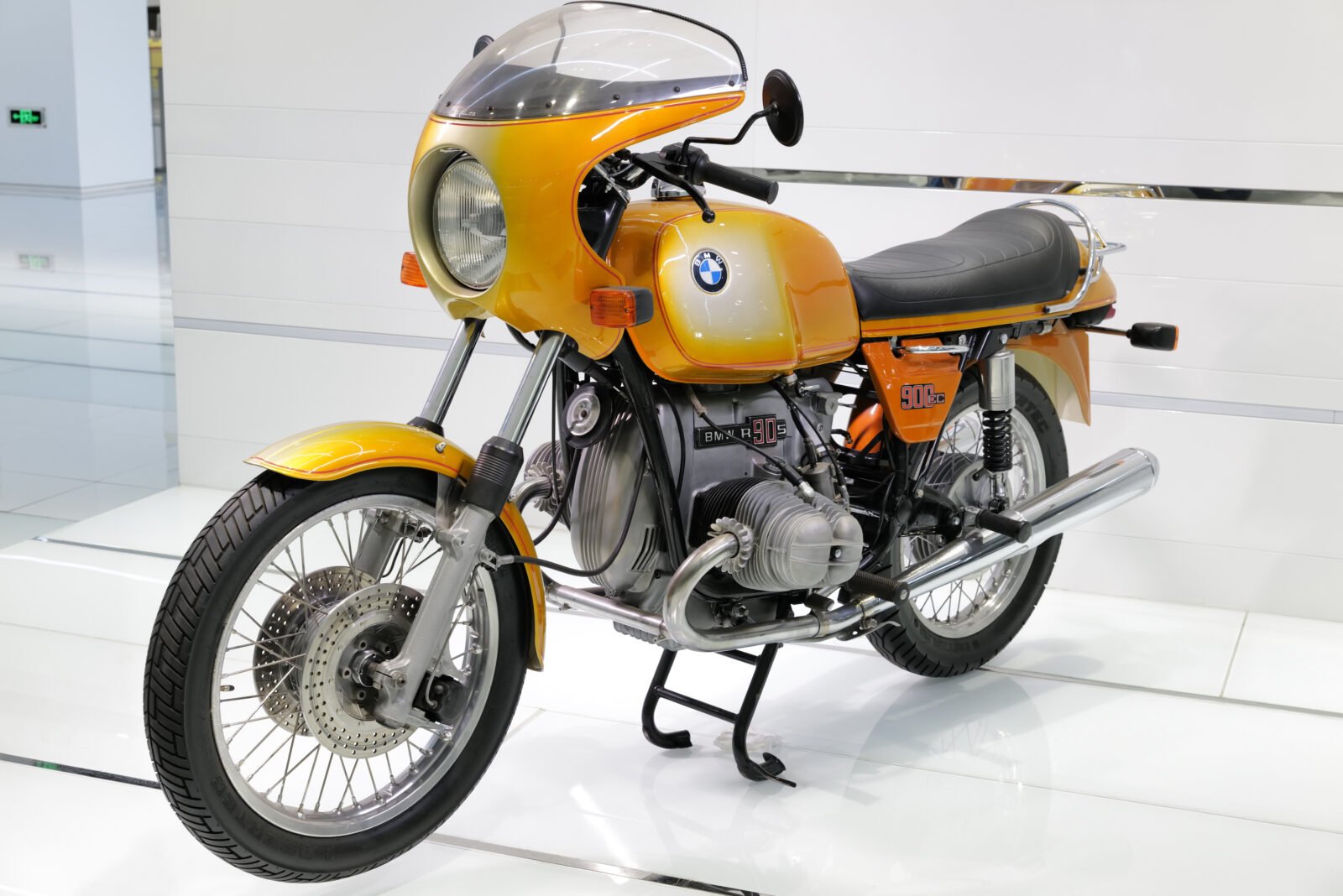 When the BMW R90S was released in 1973 it marked a stark departure from the understated models that preceded it. Within just three years the R90S would revolutionize the BMW motorcycle brand and win the 1976 United States AMA Superbike Championship.

Some have called the R90S “the world’s first sports tourer” and while that may be open to debate, no one can argue that the ability that the R90S had to keep up its fellow superbikes while also being capable of continent-crossing adventures was the key to its success.

The Bavarian “Dampfhammer” That Saved BMW

Nicknamed the Bavarian Dampfhammer (or Bavarian steam hammer) at the time of its release, the BMW R90S forever put to bed the rumblings from some executives at BMW Motorrad that they should sell off their motorcycle division and just focus on cars. 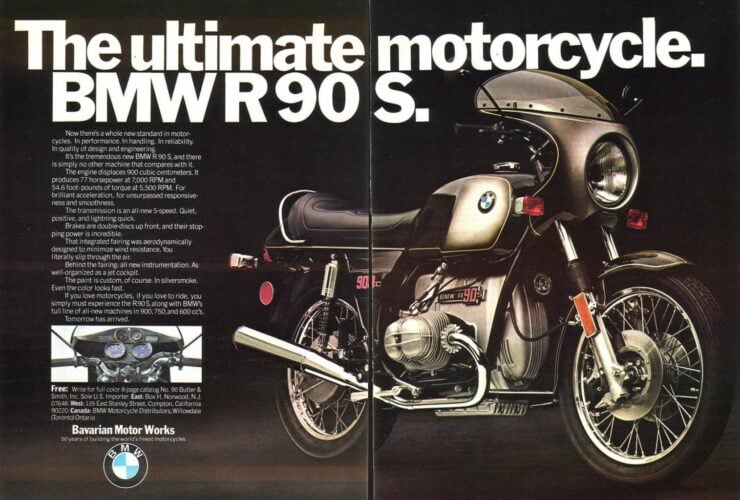 When it was first released the BMW R90S was offered in just one color scheme – the unusual and very 1970s “Smoke Black/Silver” with adhesive gold pinstripes.

BMW had actually built their first motorcycle in 1923, five years before they released their first car in 1928, so in come respects they’re a motorcycle company that builds cars and not the other way around.

The company became famous for their air-cooled flat-twin motorcycle engines and maintenance-free shaft drive systems, which proved profitable for them for decades.

By the late 1960s and early 1970s a new force had begun to emerge in the world of high-capacity sport motorcycles – the Japanese manufacturers Honda, Kawasaki, Suzuki, and Yamaha – otherwise known as the “Big Four.”

Starting with the release of the Honda CB750 in 1969, the motorcycle for which the term “superbike” was created, these inexpensive, reliable, and quick Japanese bikes left many of the traditional giants of the motorcycle world on the back foot – companies like Norton, Triumph, Harley-Davidson, Ducati, and BMW.

Some of these companies managed to adapt and survive but many didn’t. One that did was BMW, and it was largely because of the motorcycle you see here – the BMW R90S.

In the early 1970s an Swiss/American named Bob Lutz was hired by BMW as the executive VP of sales, interestingly he would later serve as a top executive at all of America’s “Big Three” automakers – General Motors, Ford, and Chrysler. 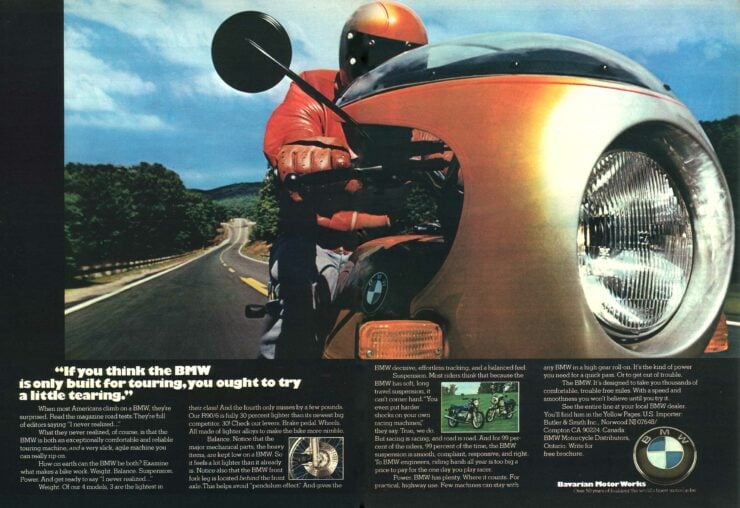 The most famous paint scheme for the R90S, and the one most people imagine when you mention the model, is the even more eye-catching two-tone “Daytona Orange” with red pinstriping.

Lutz himself was a motorcyclist and the owner of a Honda CB750, he great potential for the BMW Motorrad division but realized they needed to break the mould and move with the times. He hired designer Hans Muth to create an all new German superbike, and in so doing began the process of turning the flagging fortunes of the motorcycle division around.

Hans Muth and his team took the BMW R75/5 and began reworking it, the engineering was led by Hans-Gunther von der Marwitz who bored out the cylinders to 898cc, added higher-compression pistons, fitted Dell’Orto pumper carburetors, and BMW’s new 5-speed gearbox.

The bikini fairing and new body work for the bike were developed by Muth, cleverly they were designed to allow the R90S to be used as either a superbike or a sports tourer – with the addition of the bikini fairing up front, the comfortable seat for two people, and the ability to quickly add panniers for traveling.

Whereas the BMW motorcycles that came before had often been seen as somewhat staid, the R90S was given a bold Smoke Black/Silver paint scheme with adhesive gold pinstripes, later models would get the even more eye-catching two-tone Daytona Orange with red pinstriping – a color scheme no one could ever describe as boring. 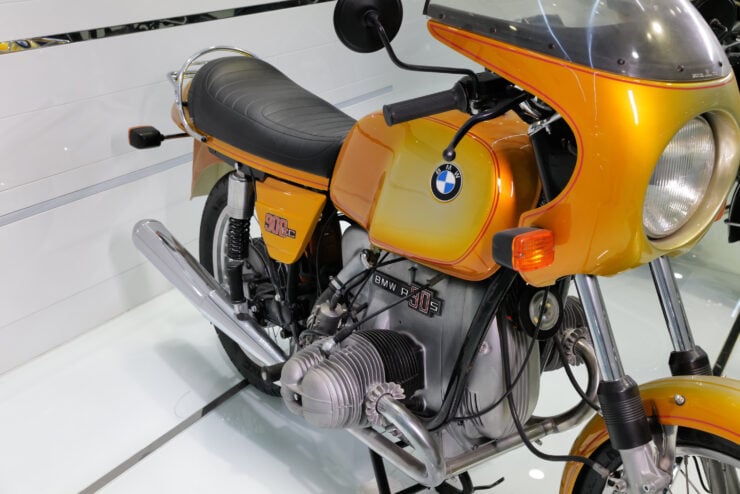 The engine used in the R90S was closely based on the two-cylinder, horizontally opposed boxer engine from the BMW R75/5. It was given a wider bore, higher-compression pistons, and uprated carburetors.

So important was the R90S to the history of the company that in 2014 they released a new version of it called the BMW R nineT with all new engineering but styling that was directly influenced by the Muth-designed legend from 1973.

The motorcycle you see here is a 1975 BMW R90S has been very well preserved as part of the Motorworld München museum in Germany. It remains in overwhelmingly original condition throughout including its bold two-tone Daytona Orange paintwork.

Tis bike is now due to roll across the auction block with RM Sotheby’s on the 26th of November. It will offer a unique chance for collectors and enthusiasts to get their hands on a museum-preserved R90S time machine still carrying its original paint. 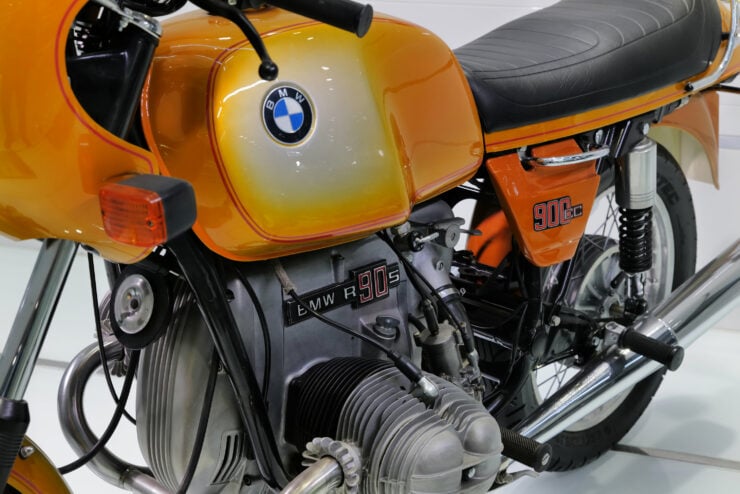 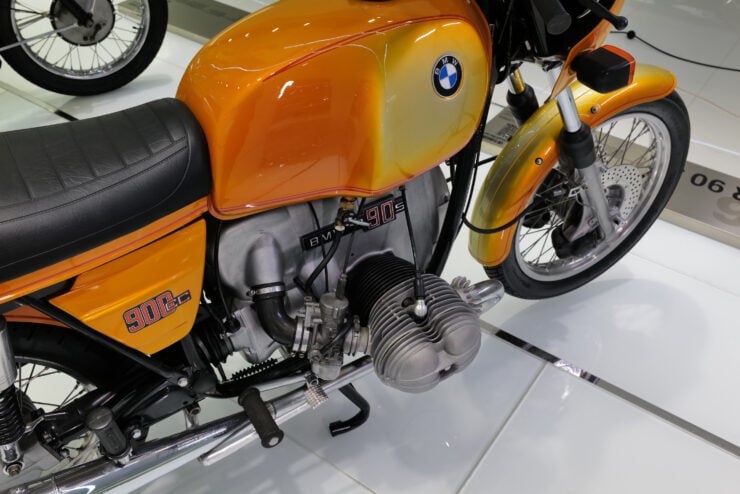 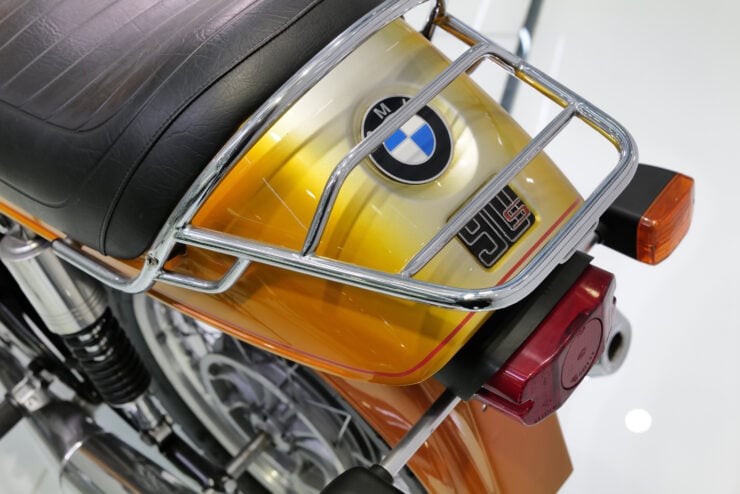 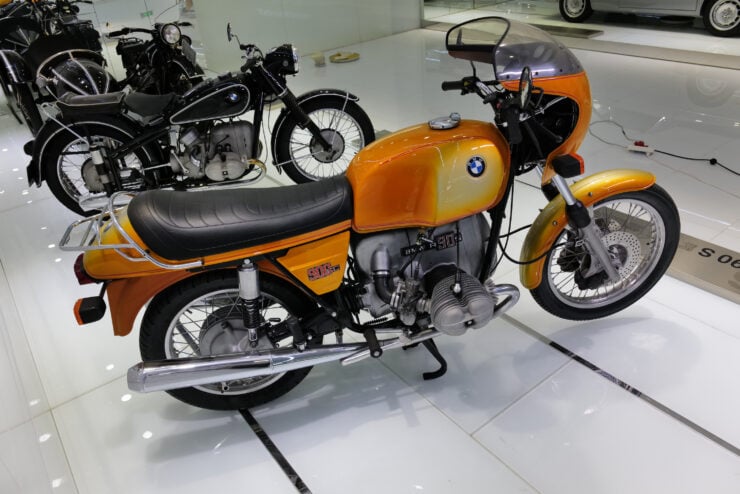 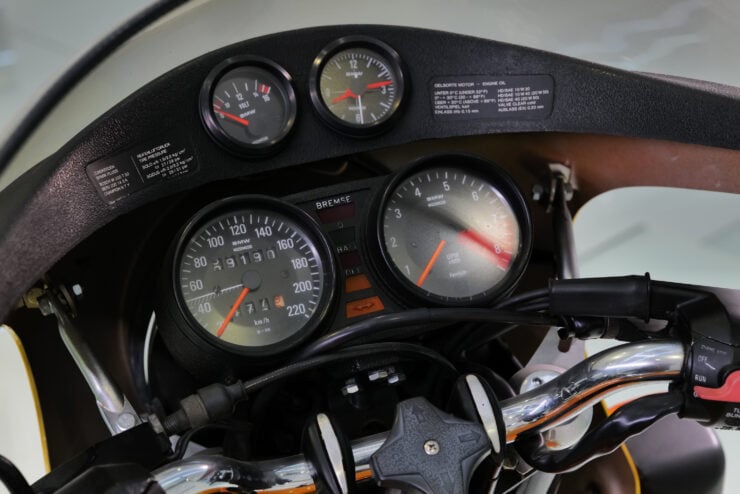 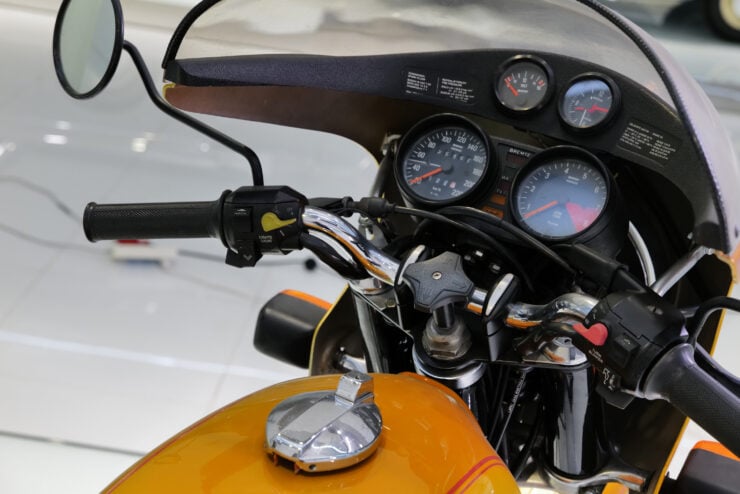 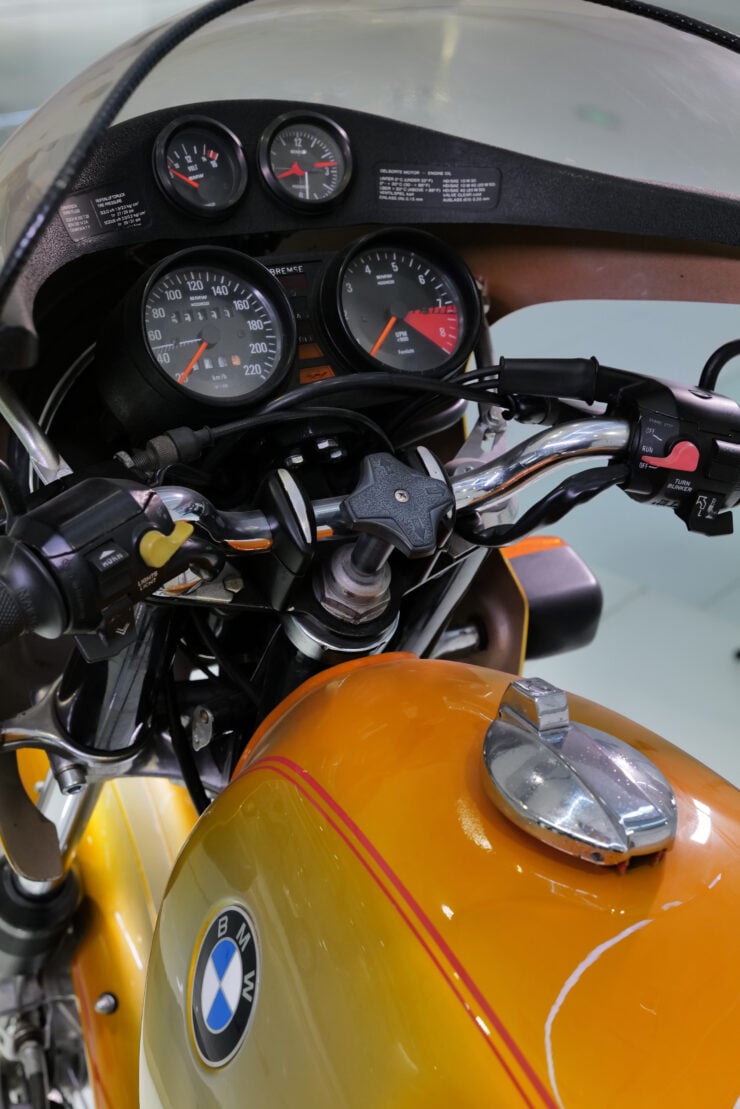 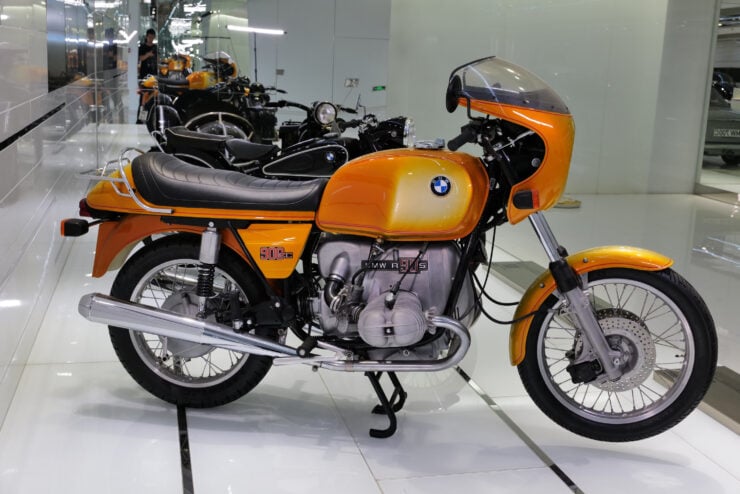 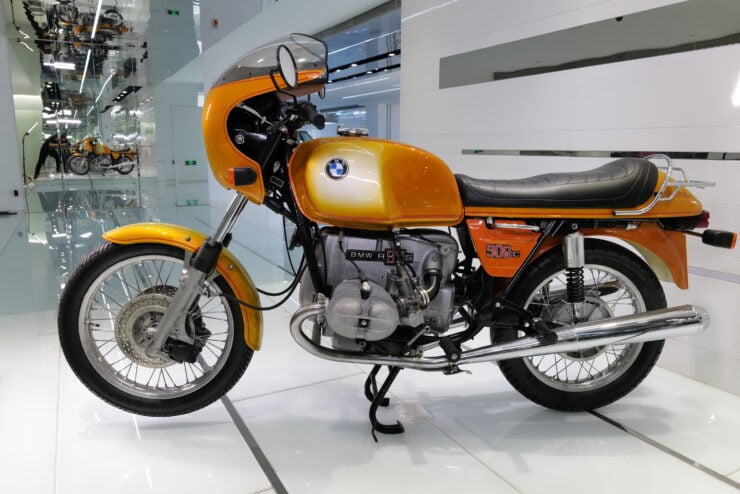 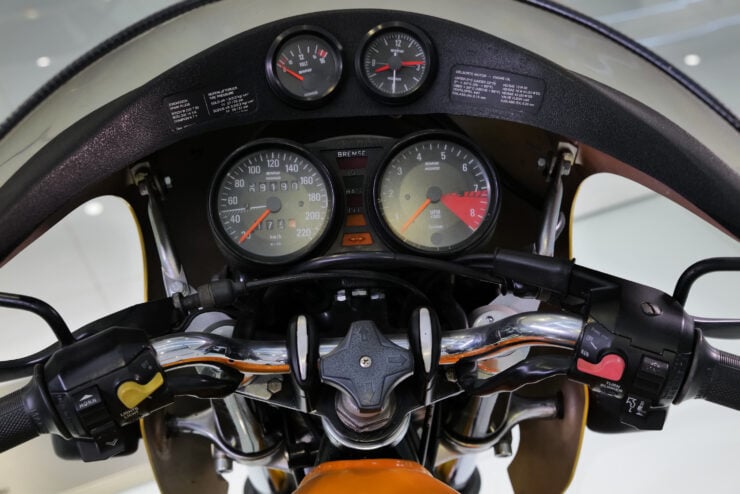 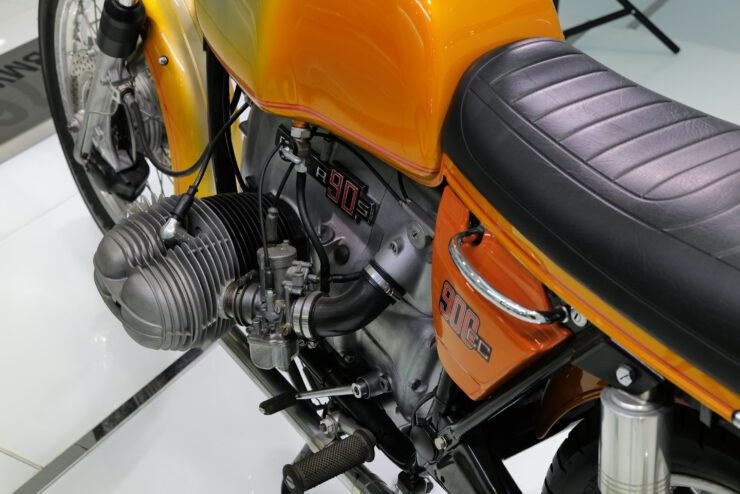 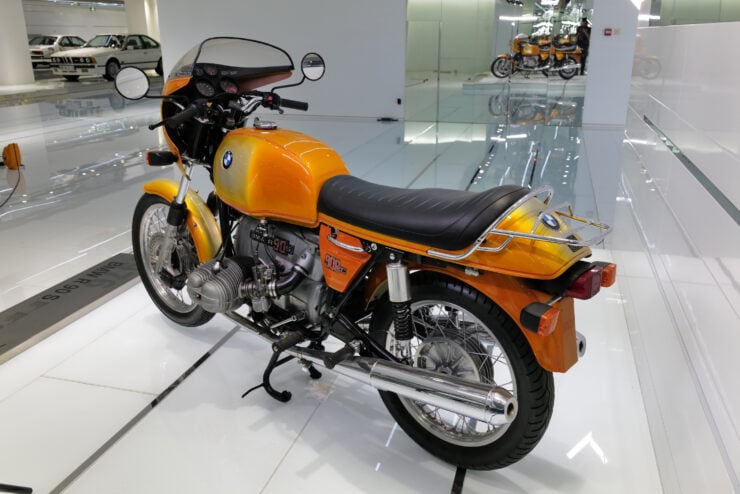