This 1972 BMW R75/5 has been painstakingly rebuilt into an evocation of one of the most important motorcycles in the history of BMW Motorrad – the original R75/5 enduro customs developed by BMW in the early 1970s.

Whereas almost all motorcyclists have heard of the BMW R80 G/S, the dual sport motorcycle that essentially established the popular adventure bike genre, far fewer have heard of the R75/5 enduro bikes that originally inspired the G/S.

When BMW first released the R75/5 it seems clear they only intended for it to be ridden on the asphalt, the /5 model family was an all new design for BMW Motorrad and they would be built in the Berlin factory, with the Munich factory focussing solely on automobile production. 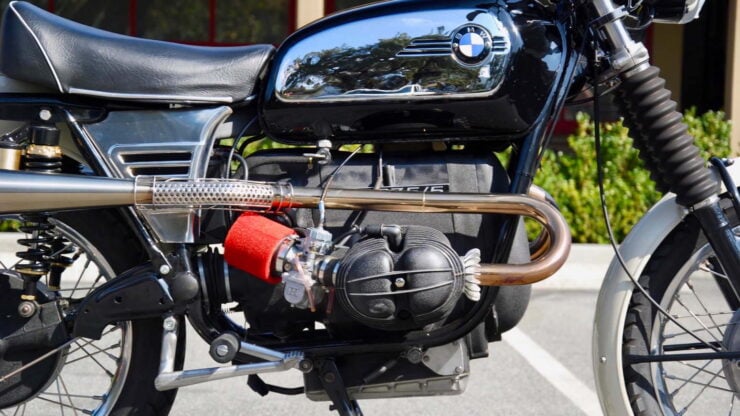 Above Image: The bike is fitted with headers that send the exhaust up and over the the cylinders rather than down and under them, to protect it from scrapes.

BMW is a German company of course, and Germans are a famously logical people, so they developed the /5 model family to be modular. Many of the parts between the three motorcycles were interchangeable, and in the years that followed their introduction many people would take advantage of this modular design by bolting larger cylinders and heads to the smaller engines to increase their capacity, and thus their power.

At their heart the /5 series are powered by a signature BMW horizontally opposed twin with the air-cooled cylinders sticking out in the clear, cool airflow – this layout earned them the nickname “airheads.”

Power is sent back through a 4-speed gearbox to a shaft drive powering the rear wheel. The R75/5 and the rest of the /5 models all used a standard swing arm with twin shock absorbers, telescopic forks, and front/rear drum brakes.

Almost as soon as production was underway in 1970 there were versions of the BMW R75/5 being modified for off-road racing. Legendary German enduro rider Herbert Schek would pilot his R75/5 to three championship wins in a row in the German off-road championship (over-500cc class). 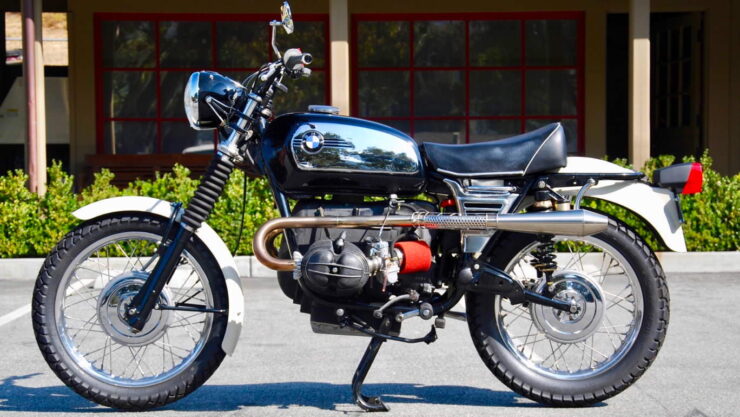 Above Image: This custom R75/5 has high suspension than stock, with a slew of upgrades to make it more capable off-road.

Some employees at BMW would later build themselves their own versions of the R75/5 ridden by Schek, and this would plant a seed that would result in 872cc prototypes that would become the race-only GS80 model, not to be mistaken with the later R80 G/S.

The GS80 would compete in the new-for-1978 over-750cc class in some forms of off-road motorcycle racing. Richard Schalber rode a GS80 to a win in the 1979 German off-road championship (over-750cc class). A year later in 1980 Werner Schütz repeated this feat while Rolf Witthoft won the European championship.

This set the stage for the arrival of the BMW R80 G/S that would go on to take multiple wins in the grueling Paris Dakar Rally, and establish the adventure motorcycle genre.

The motorcycle you see here was built to carefully showcase the designs used on those early R75/5 enduro bikes, or scramblers as they likely called them at the time.

It has a single saddle with ample padding, essential given the considerably less modern suspension that was commonly used.

Both the front and rear suspension has been increased in height in boost ground clearance for obvious reasons, and high-exit exhausts have been installed that run gasses up and over the cylinders rather than down and under.

The completed bike looks almost like it could be sitting in the BMW Motorrad Museum, the only major giveaways that it’s not a period race bike are the tires and the piggyback shock absorbers.

This bike is described as having a ground up and customization restoration, it’s fitted with Mikuni carburetors, a custom exhaust, an LED bar and indicators, the wheels were rebuilt by Buchanan, it has a powdercoated frame, and new paint with a matching numbers engine/frame combination.

If you’d like to read more about this unusual custom or register to bid you can click here to visit the listing, it’s due to cross the auction block in mid-August and at the price guide is $20,000 – $25,000 USD. 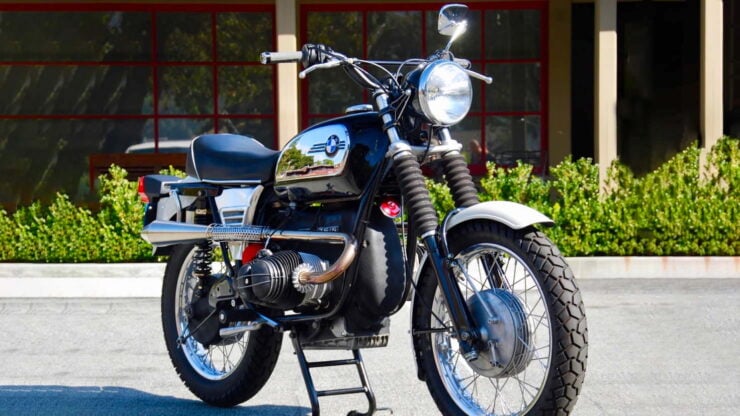 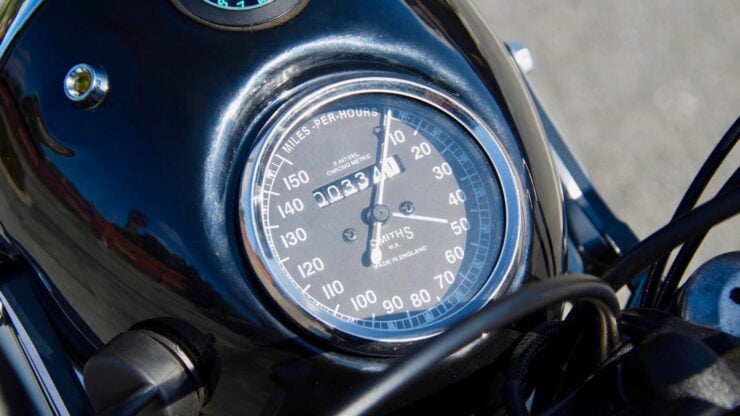 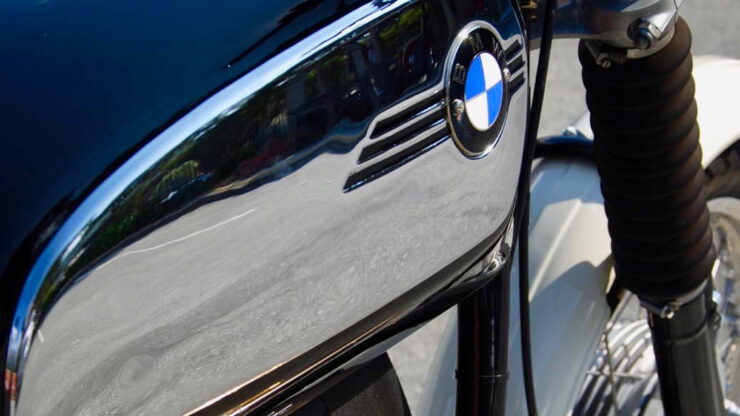 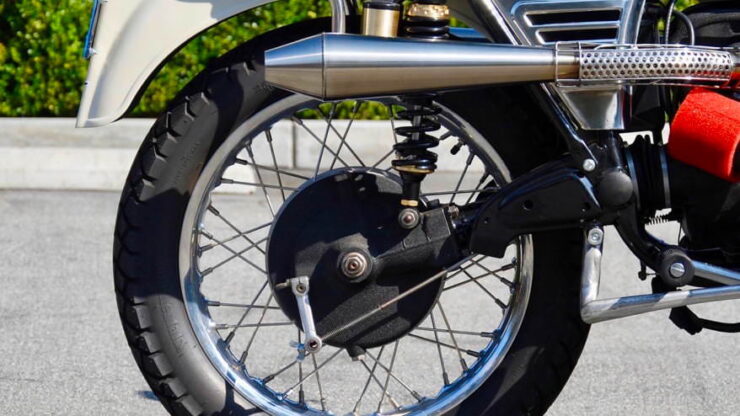 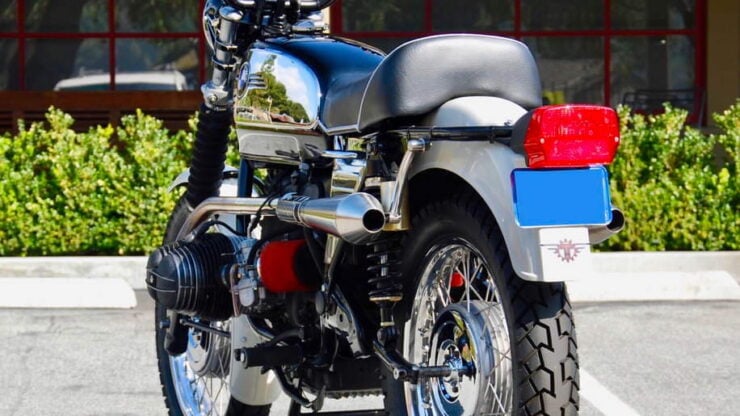 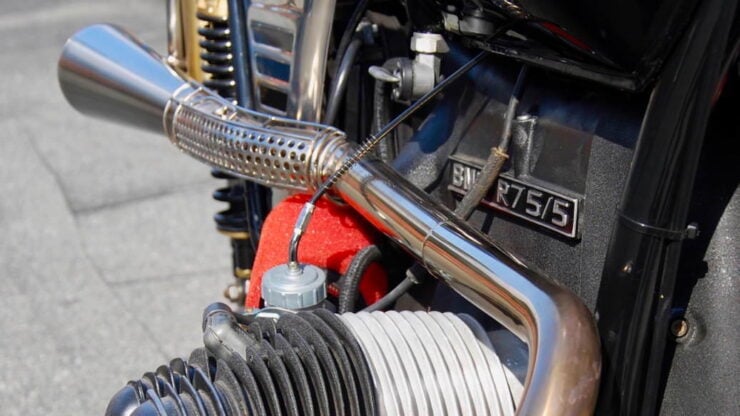