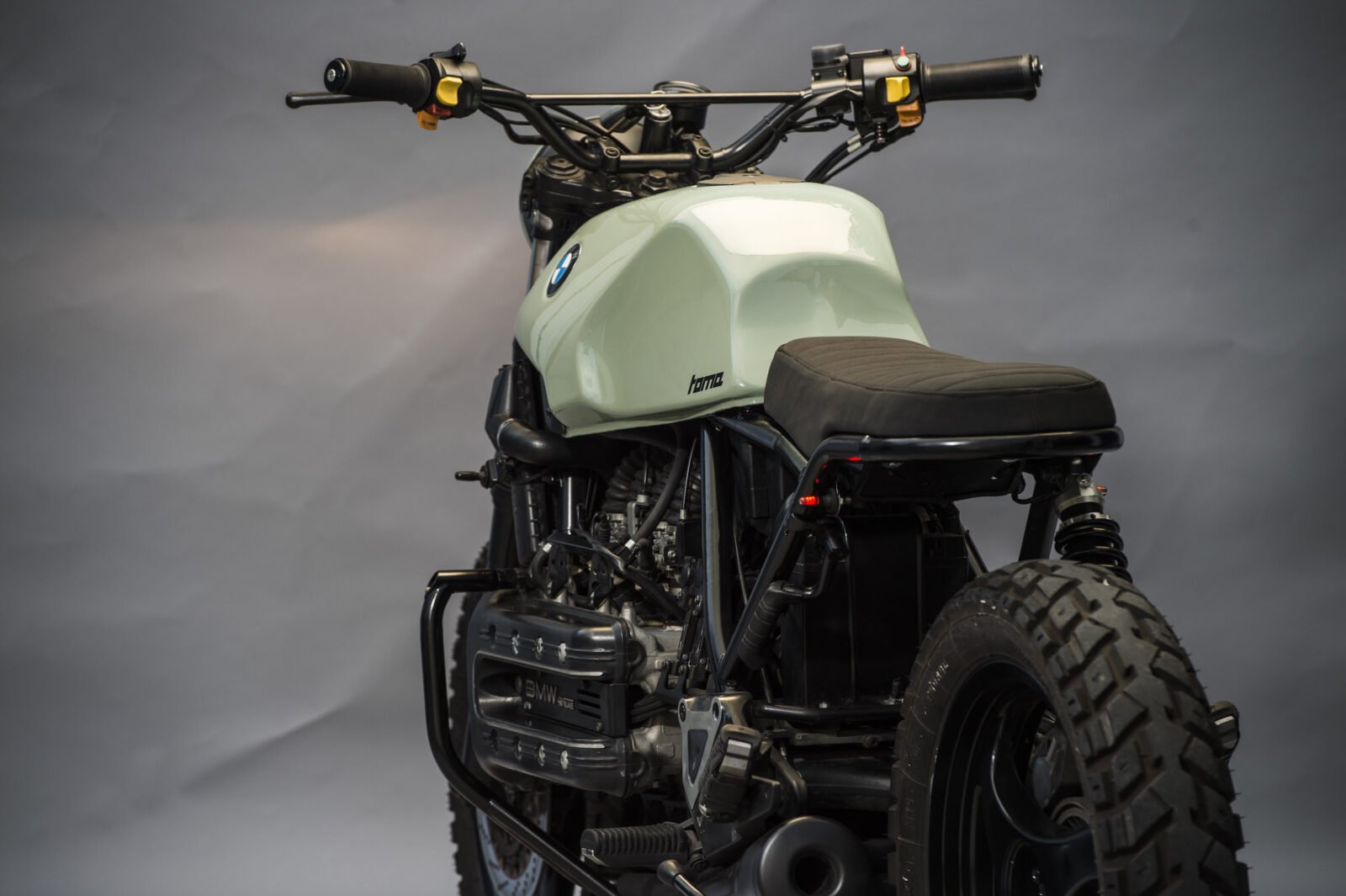 This BMW K1100 Scrambler represents a direction that BMW would likely never have considered taking with their large capacity 4-cylinder, but luckily Thomas Jeukens of Toma Customs took it upon himself to make the bike a reality.

The BMW K1100 was one of the largest iterations of the famous German flying brick, so named because the engine is an inline-4 laid on its side, with the head on the left and the crank on the right – perfectly aligned to send power back through the gearbox and into a shaft drive to the rear wheel with only a single 90 degree turn.

The BMW K-Series of motorbikes was developed to answer the advanced inline-4 cylinder models coming out of Japan – often referred to as the Universal Japanese Motorcycle or UJM. The German engineers at BMW would never dream of being seen to emulate the Japanese, so they set about developing their own inline-4 that no one would ever mistake for a UJM. 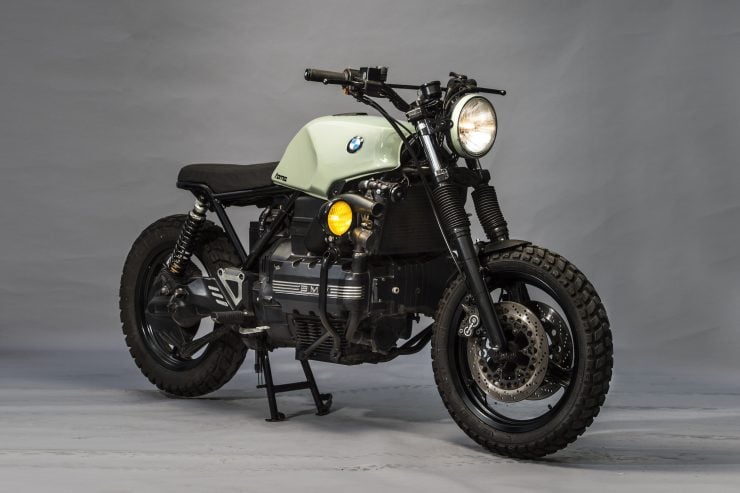 The motorcycle they created utilized a liquid-cooled inline-4 cylinder engine with double overheads cams, the engine is laid on its side to give the lowest possible center of gravity, and anyone familiar with BMW Motorrad with already know the company used to prefer its cylinders traveling horizontally rather than vertically.

Though the K-Series would never outsell the UJMs it has aged exceptionally well, and today they make excellent touring bikes and popular starting points for custom motorcycle builders. 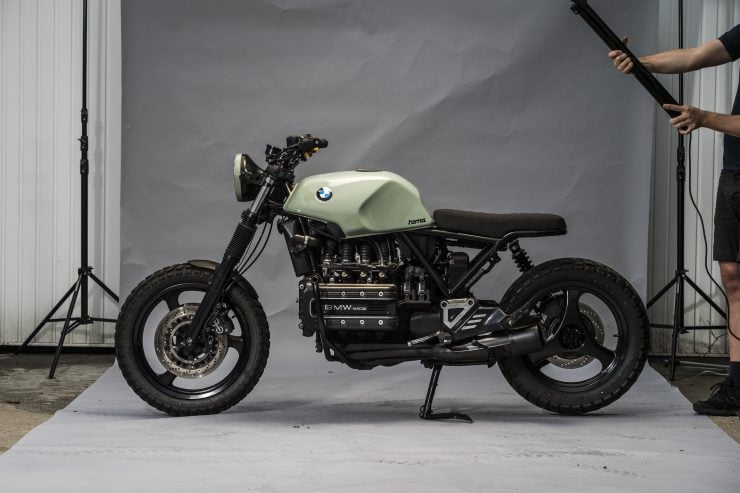 Toma Customs was founded by Thomas Jeukens, formerly a strategy manager for a large global consulting firm. Thomas’ dream had always been to build world-class custom motorbikes, so he left his well-paying job and set about making that dream a reality.

He created TOMA, a Brussels-based custom workshop that builds motorcycles the way a Savile Row tailor makes a suit – specifically to suit the style and measurements of its future owner. Jeukens spends time getting to know each client personally and discussing both their favorite motorcycles as well as everything else under the sun, so that the completed bike will fit them like a glove. 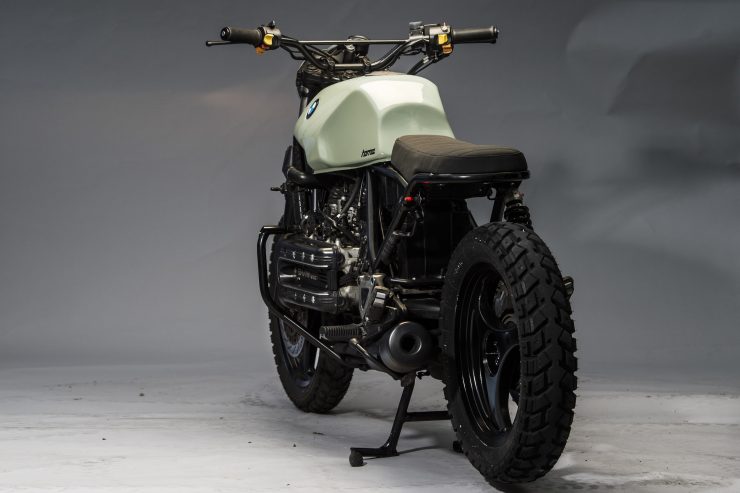 The Toma Customs BMW K1100 Scrambler actually started life as the garage’s first ever custom build a few years ago. Customer orders starting coming in and the K1100 project was shelved until there was more time available.

The bike, dubbed Toma #1, sat un disturbed in the corner of the workshop until new client Olivier walked into the workshop and his eyes settled on it. It was love at first sight even in its unfinished condition, Thomas was initially a little reticent to let it go due to the sentimental attachment but he realized Olivier would make a fantastic owner.

The plan was to build a genuinely capable scrambler from the fully-faired road bike, so the Toma Customs team had their work cut out for them. The fairing was removed along with most of the original electrics, the seat and rear cowl, both fenders, and the headlight, brake light, and blinkers. 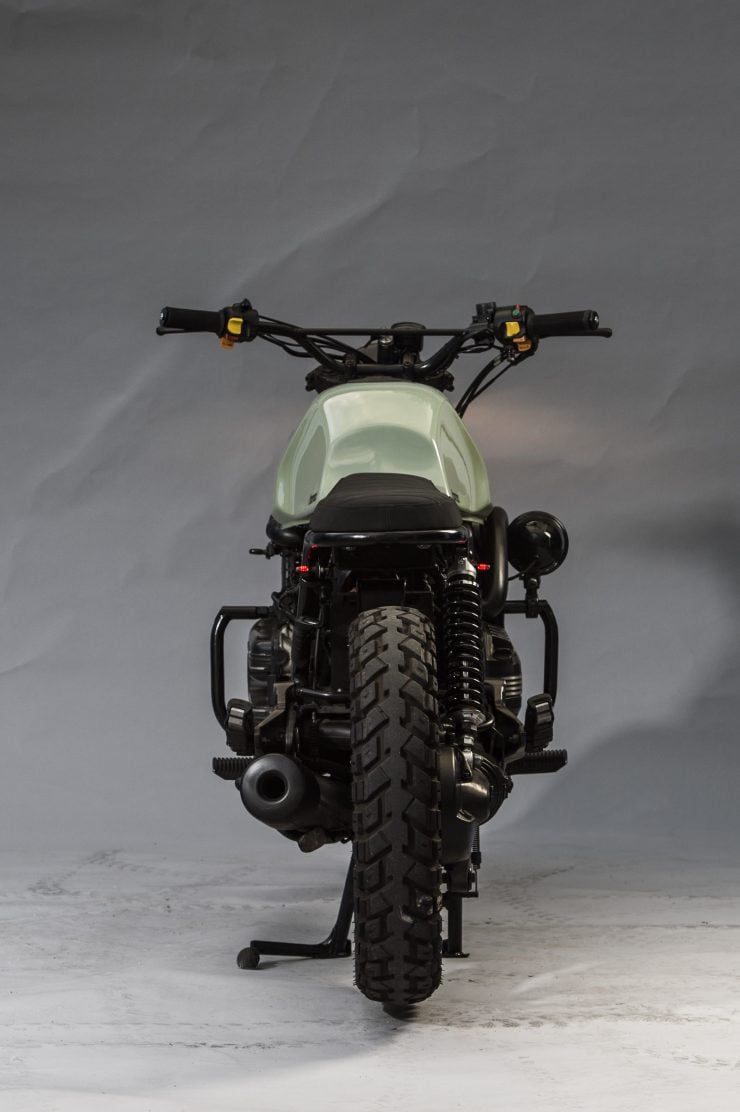 The original fuel tank was kept in place and the subframe was modified with a shorter frame loop to match a new bespoke seat. Once the seat pan was fabricated a new seat was upholstered in-house with Alcantara.

Cunky engine protectors were installed on either side of the radiator, and a yellow spotlight was fitted to the righthand side next to the air intake. A new circular headlight was fitted along with new blinkers and a new brake light. The bike was now starting to look a lot more like its BMW boxer-engined siblings, not a bad thing.

A pair of dual sport tires were fitted to the original wheels after they’d been painted black, and a new set of handlebars were installed along with a new speedometer  and a freshly painted fuel tank in a shade of green inspired by vintage Italian sports cars.

New rear suspension was an essential addition, as was a new higher-performance 4-into-1 exhaust, and a trimmed front fender.

The completed bike is a fantastic example of a K-Series scrambler, and I wouldn’t be at all surprised if it inspired a slew of similar builds in the near future. If you’d like to see more from Toma Customs you can click here to visit their website, or you can follow them on social media below. 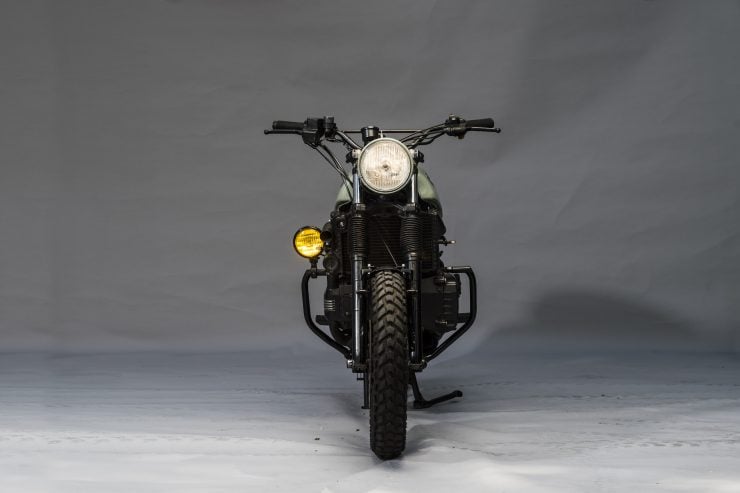 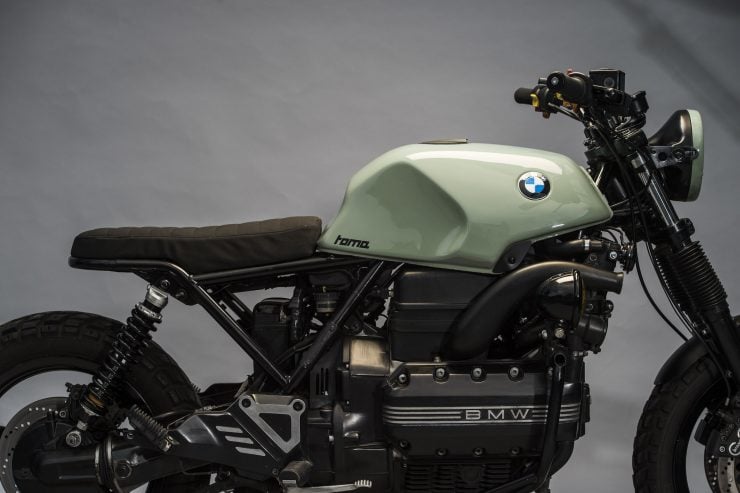 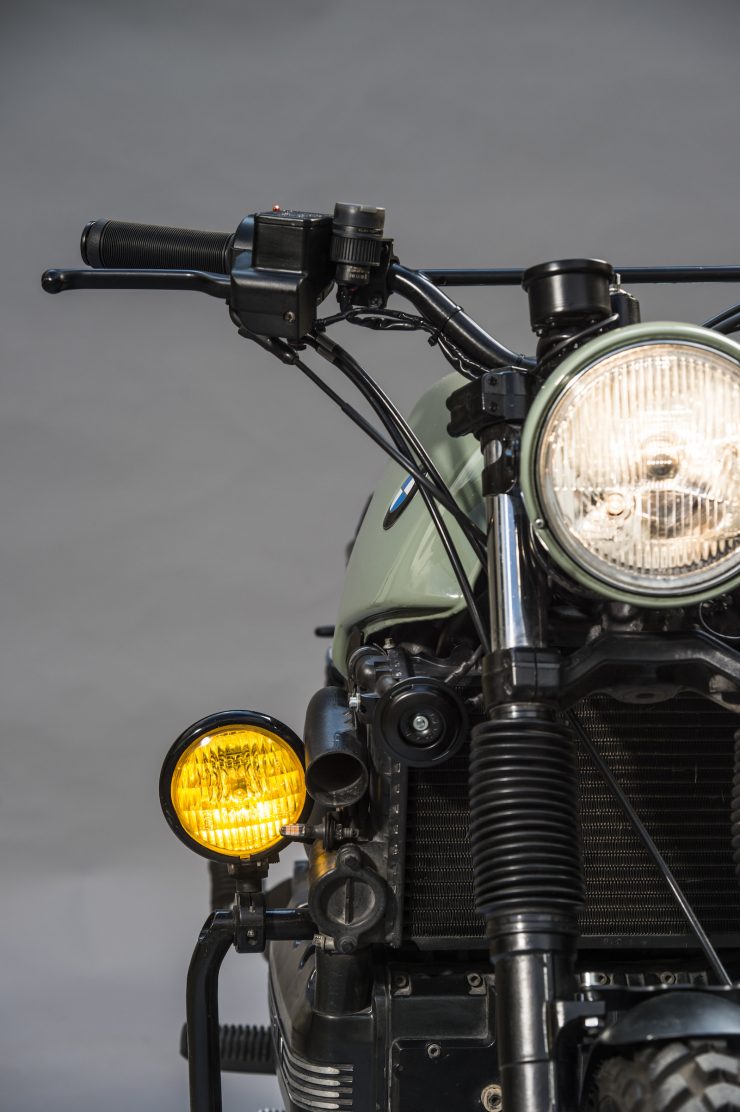 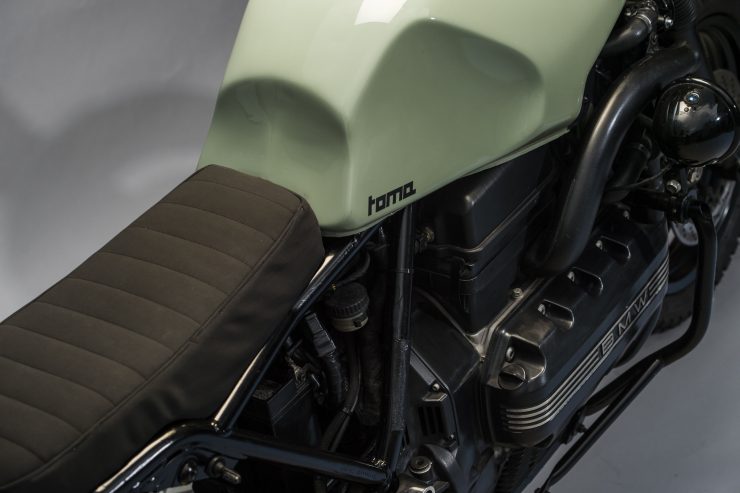 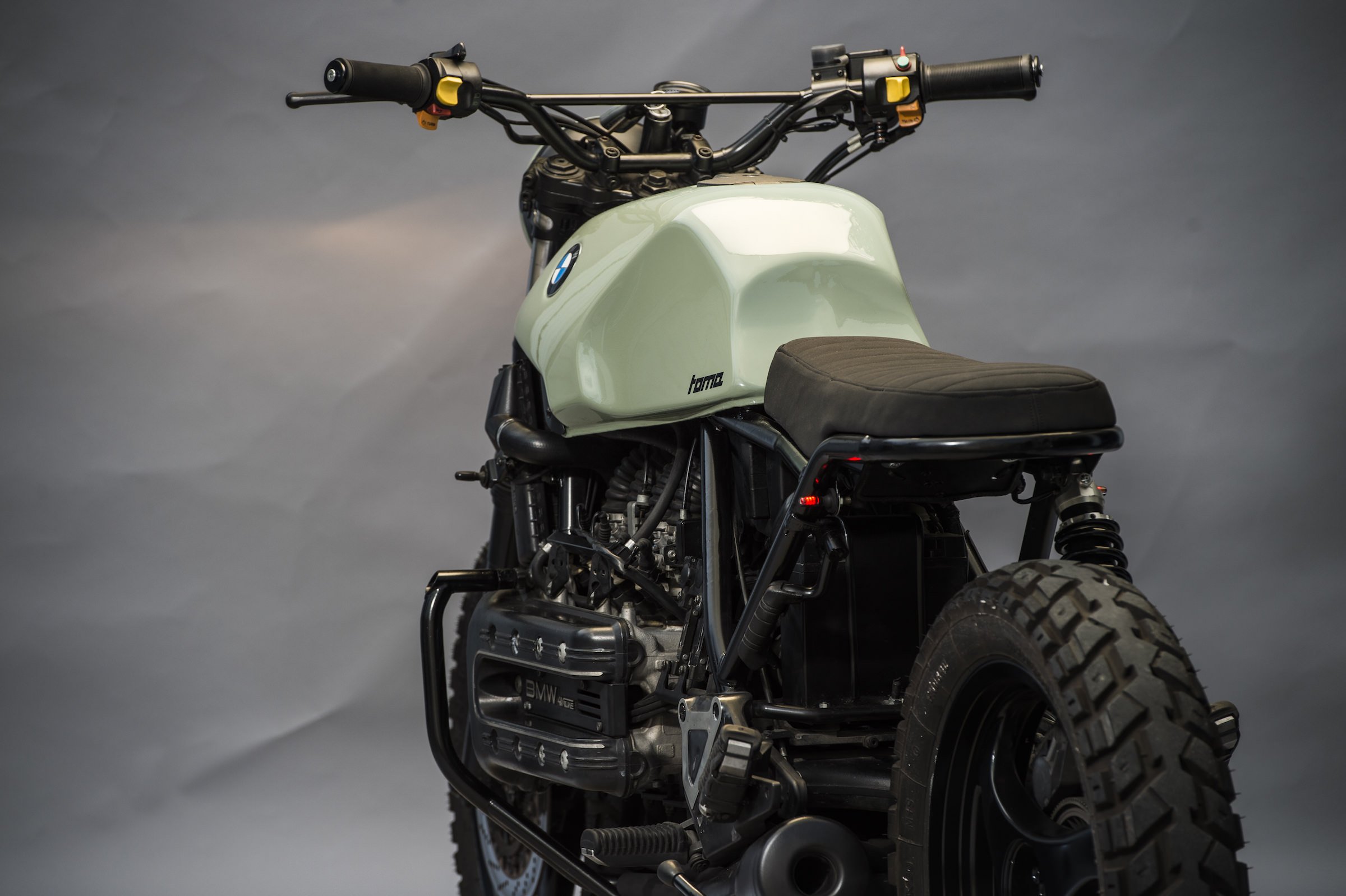