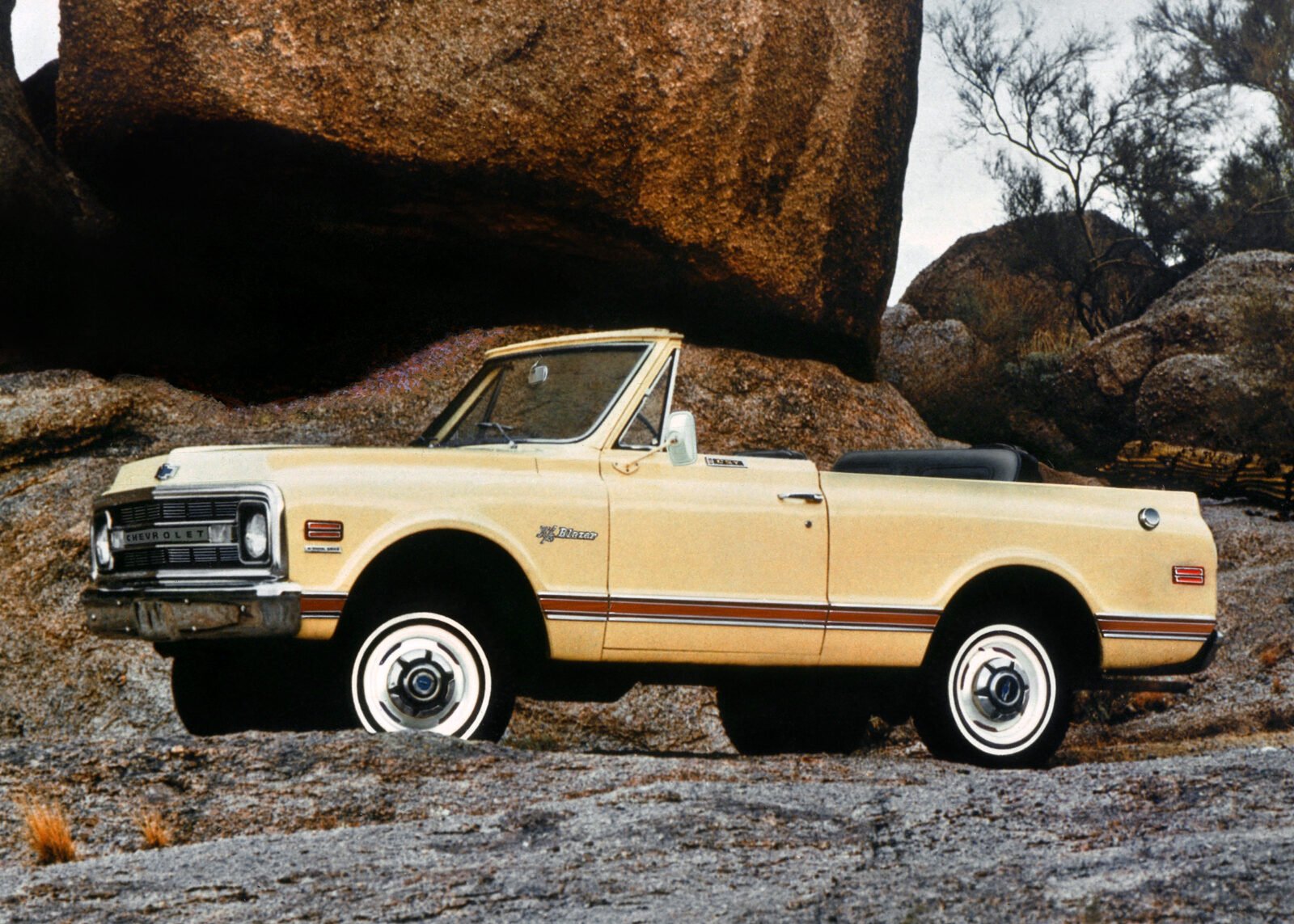 The First Generation Chevrolet K5 Blazer first appeared in 1969 as a competitor to the already established International Harvester Scout and the Ford Bronco, despite its status as the new kid on the block, it was outselling both of its competitors within a year.

There’s an old saying, often used in the military, called the “KISS” principle. When asked by people who do not know what this means we tell them it’s an acronym that stands for “Keep It Simple”. Being a human being, and therefore one of the most intelligent beings on earth, the questioner will normally then challenge you with “But there are two “esses” in KISS”: to which you smile as you reply “OK, then it means “Keep It Simple Stupid”!

Keep It Simple is exactly what Chevrolet decided to do when International Harvester rolled out their Scout, and then Ford rolled out their much improved competitor the Bronco. What were Chevolet to do? Should they hit the Panic button and create a Chevrolet clone of the Bronco? No, Chevrolet instead hit the “Don’t Panic” button and considered what sort of rabbit they could pull out of the hat using the product line they already had.

The engineers looked at the design concept that had already been created by Ted Ornas of International Harvester, and analysed what had made it so appealing to the market that Ford had got into the act and built their own improved version. Not only that but they also analyzed the features that Ford had regarded as improvements. 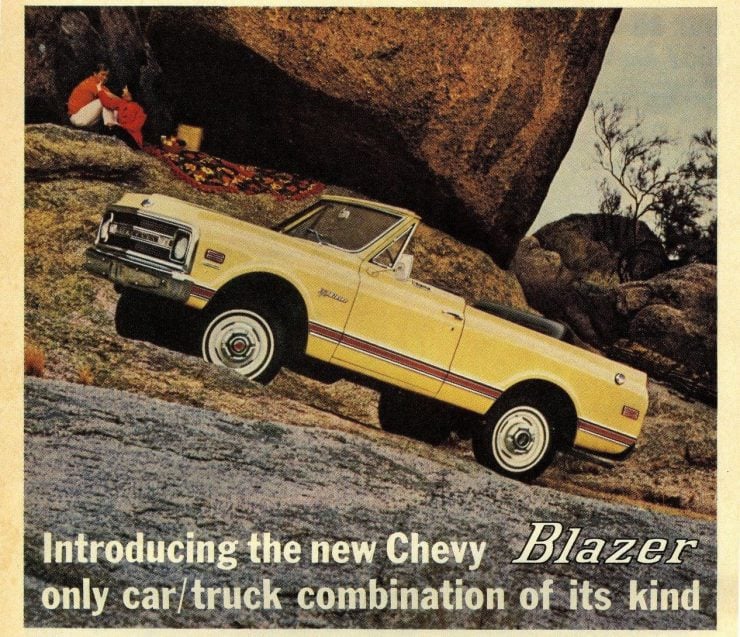 The International Harvester Scout had been developed from the basic concept of the Willys Jeep and its successor, the Jeep CJ. The former being a light military vehicle designed as a replacement for a horse and the latter being the “Civilian Jeep” version of the military original.

This was the brief Ted Ornas had started out with, but he had realised that people wanted more comfort than a Jeep offered and he had created the Scout to provide that. Ford had taken the design vision a bit further and incorporated an independent front suspension with coil springs, and more comfort features.

Chevrolet’s engineers looked at both vehicles and concluded that they did not need to reinvent the wheel. Both the Scout and the Bronco were quite simple almost agricultural vehicles and Chevrolet had existing vehicles that, with minimal modification, could fill the same role, but better.

Chevrolet’s engineers looked at their existing line of light trucks and came to the conclusion that they could use a shortened K10 pickup truck as the foundation for their new vehicle. Such a vehicle would also be able to compete in the same marketplace as the Jeep Wagoneer. Using a shortened K10 pickup chassis the Chevrolet K5 Blazer was somewhat larger than its Scout and Bronco competitors.

This was a bit of a two edged sword in that the hard-core off-roaders would tend to prefer a slightly smaller vehicle more able to get into tight places: but those who primarily wanted their vehicle for highway use, and to have the ability to have more comfort, and carry more gear, would be more likely to opt for the larger K5 Blazer. 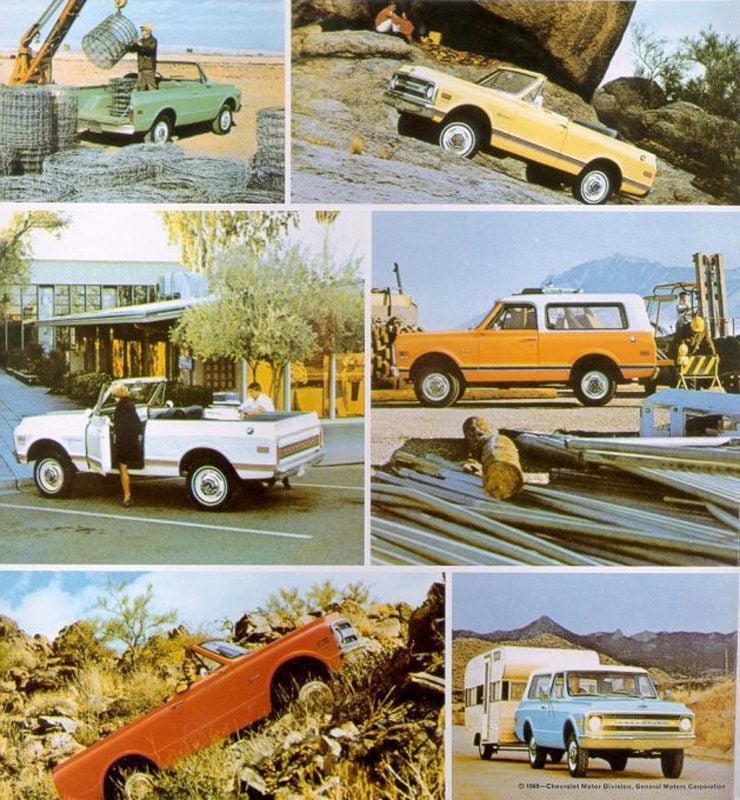 The body used on the K5 Blazer was a modified version of it’s parent made as an open-top body, with a removable fibreglass top. The body options allowed for a great deal of flexibility in how the Blazer could be used. Seating options were for one, two, or five seats.

One rather useful body option was for a lockable lift up rear gate with telescopic supports. For people using a Blazer for hunting for example the ability to lock the vehicle, which might need to contain rifles and/or shotguns and be secure enough for that purpose, was an important practical feature. 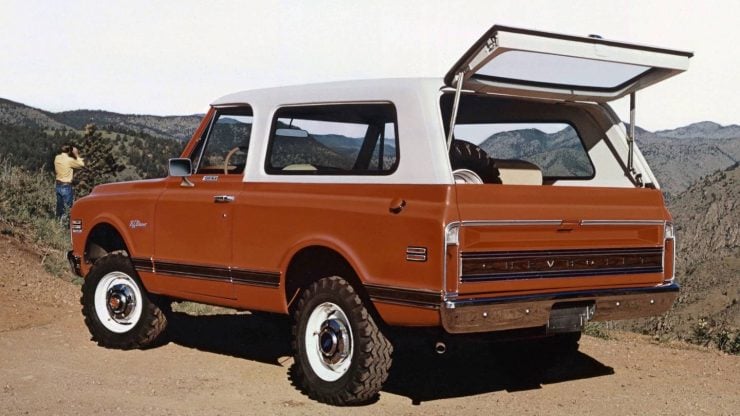 In developing the K5 Blazer, Chevrolet used a shortened conventional ladder chassis from the K10 pickup, thus using the same full size light truck platform. The first models were only made as four wheel drives with live axles and leaf spring suspension both front and rear, much as the Scout and Land Rover.

Brakes were 11″ drums all around, and this was a vehicle with a high degree of parts interchangeability with other Chevrolet models. Among the options available were power assisted brakes and steering which, given the vehicle weight which could range between just under 3,000lb-4,000lb would have been sensible choices. 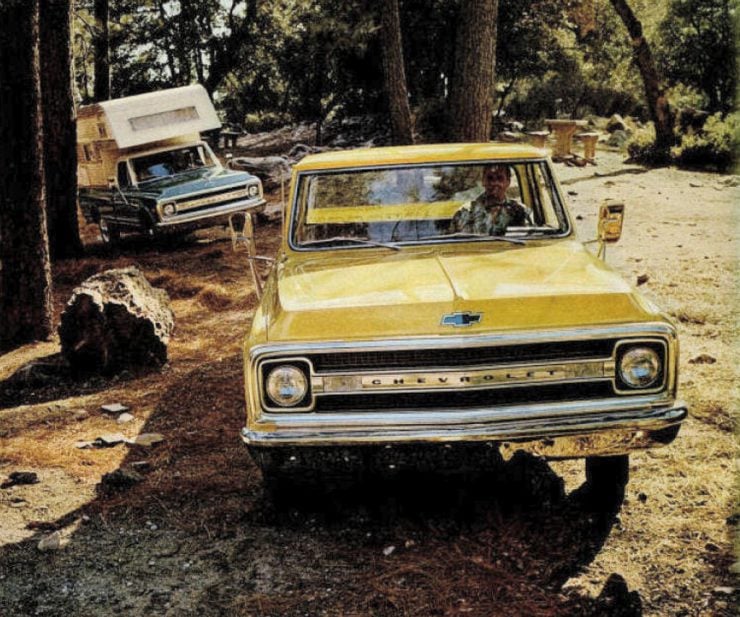 Putting the whole vehicle together the Chevrolet K5 Blazer featured a wide track and, for a short wheelbase vehicle, a full 104″ wheelbase, which is only slightly shorter than the Land Rover’s 109″ long wheelbase model.

This made the Blazer an impressive automobile to drive and to ride in. It offered size, comfort, stability, a full 8″ of ground clearance, and optional air conditioning, all of which contributed to it creating impressive sales numbers. For the first year of production, 1969, 4,935 Blazers were sold.

But Chevrolet reasoned that to call the new two wheel drive version as a “C5 Blazer” might only serve to confuse the buying public, and a confused buyer is a reluctant buyer, so they stuck with the K5 Blazer name to avoid any purchase preventing confusion.

The two wheel drive K5 Blazer differed from its four wheel drive sibling by having a fully independent front suspension with coil springs, while at the rear the axle was located by trailing arms also with coil springs. This provided a significant improvement in the ride quality and overall handling of the Blazer, especially in highway use. The reviews of the K5 Blazer either in four or two wheel drive versions acted as strong acclamation for the vehicle and sales continued to climb in a most satisfactory way. 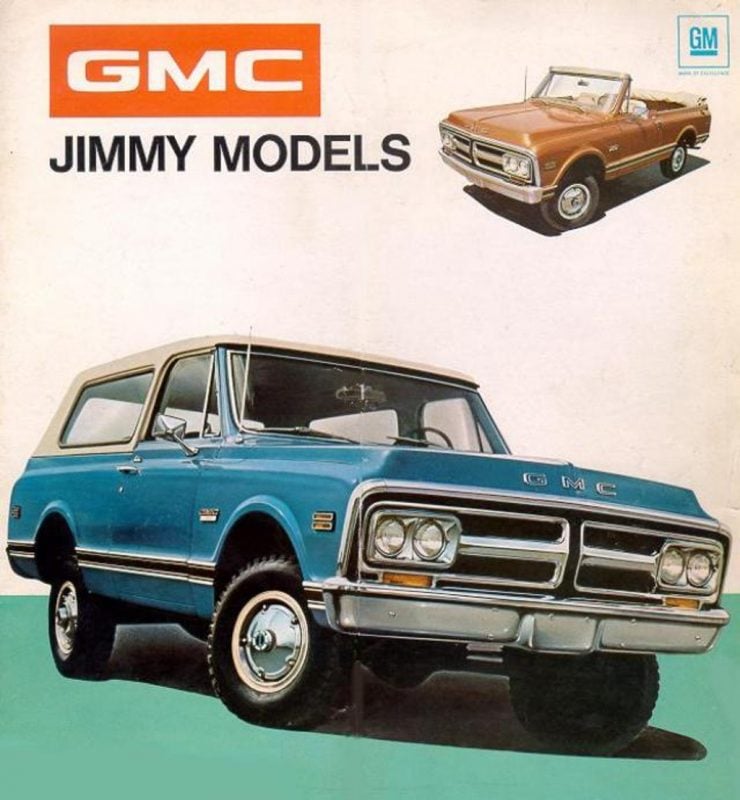 1970 was also the year that the Blazer was given a slightly more upmarket sibling, the GMC Jimmy. The GMC Jimmy featured some differences in the body styling, such as the use of quad headlights as opposed to the Blazer’s twin headlights. Other than styling differences the Blazer and the Jimmy were identical however.

Chevrolet understood they were onto a winner and so they made the improvements to the K5 Blazer strategic and moderate. In 1971 the front brakes became discs  with 11″ drums retained at the rear. An improved instrument cluster and optional tachometer were added to make the Blazer even more attractive, and to further improve its “word of mouth” reputation. That year sales went up to 17,220, and in 1972, the final year of production of the First Generation Blazers, 44,266.

The Blazer would enjoy a long production run over two major generations, with the model being replaced in 1992 by the Chevrolet Tahoe. The popularity of the original Blazers is such that Chevrolet announced in 2018 that they would be bringing the Blazer back as an all-new model for 2019. 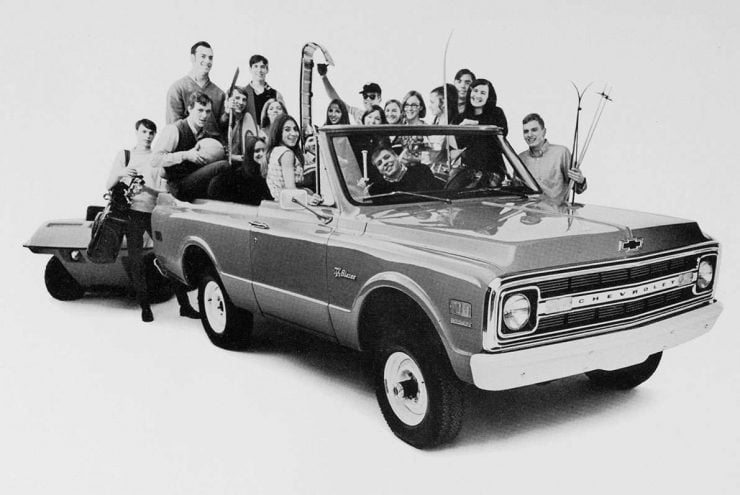 The Chevrolet K5 Blazer did not attempt to clone the successful efforts of International Harvester and Ford but instead used them as a base guideline to create something that was literally “bigger and better”, at least in the minds of those who bought them rather than a Scout or a Bronco.

That Chevrolet had pulled the perfect rabbit out of the hat was evident in the sales figures. The word of mouth reputation of the K5 Blazer was in all likelihood one of the principle things that had people opening their wallets for one: not only did Chevrolet have the right concept and design, but they had built it to deliver reliably what customers were looking for.

What has proved to be interesting decades later is that these K5 Blazers have been undergoing something of a renaissance. They have been well and truly discovered by the classic car and restomod enthusists and the value of good examples of this classic have been climbing steadily: to the joy of First Generation K5 Blazer owners, and to the chagrin of those who would dearly like to acquire one.

One thing is sure: the K5 Blazer deserves to be a much sought after classic. 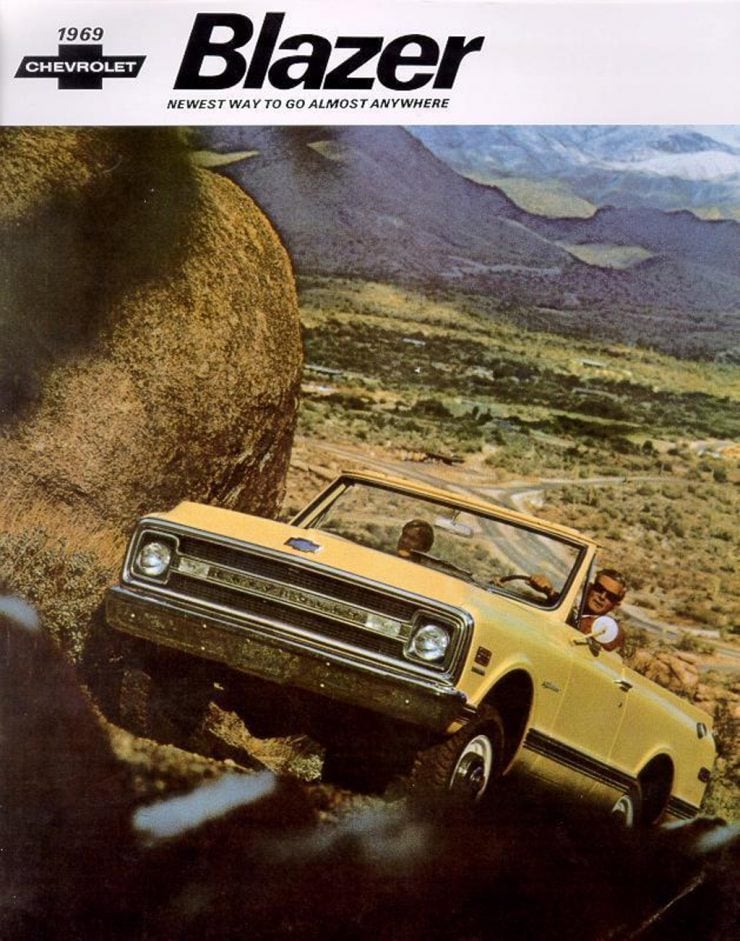 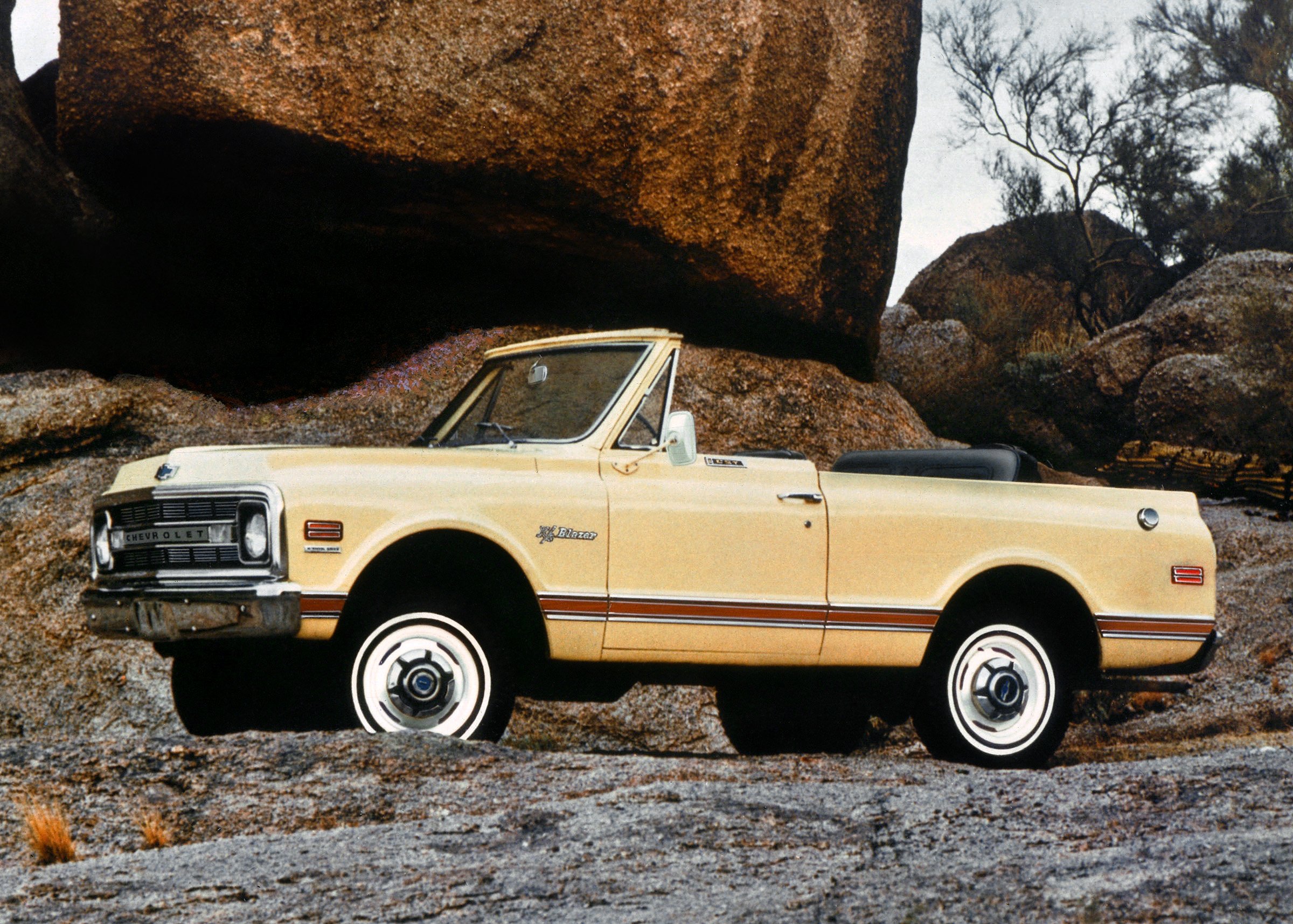