5 Minute Histories: The Story of the BMW K100 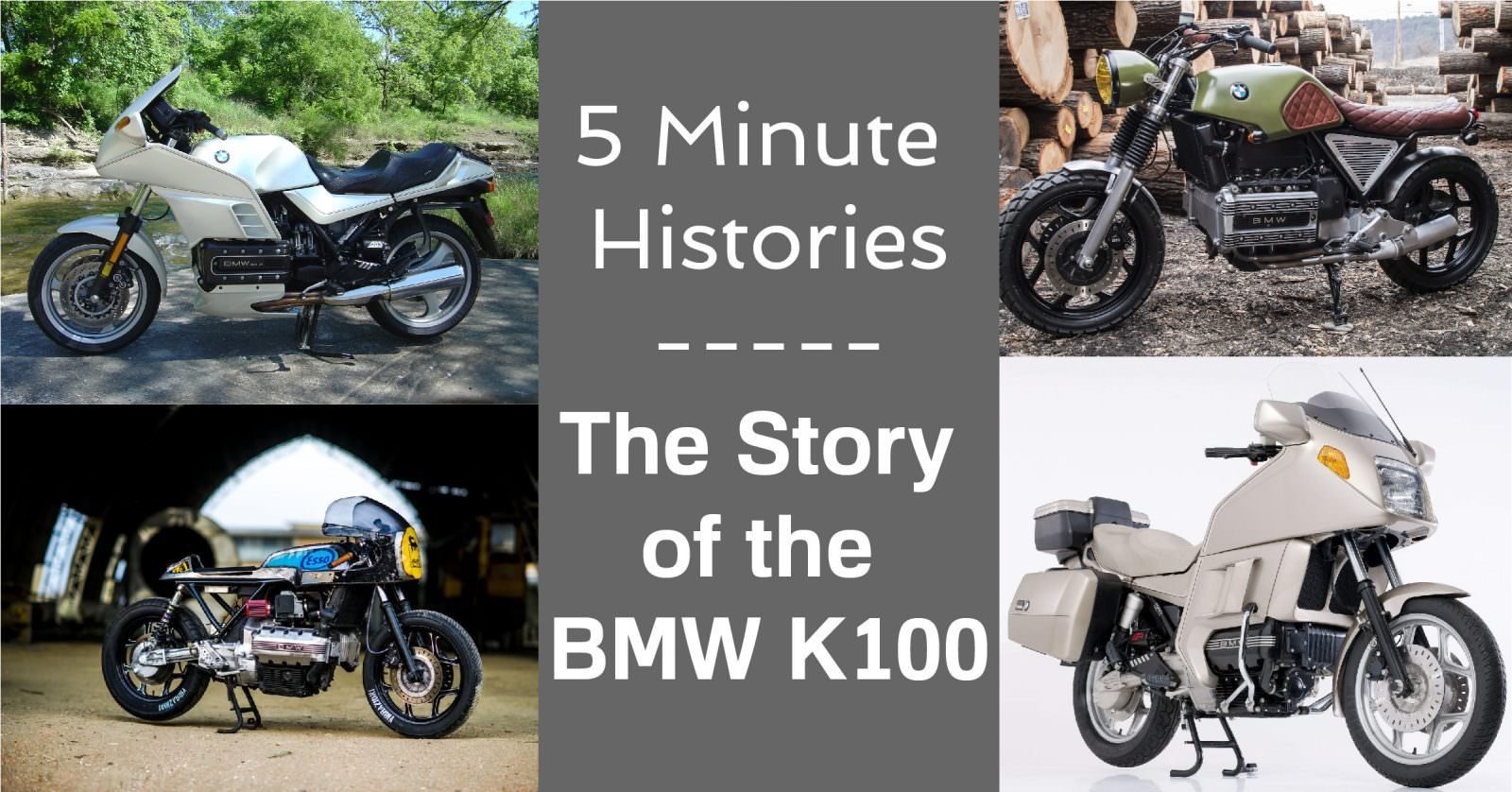 The Beginning Of The BMW K100

The Japanese rise as a dominant force in the motorcycle industry during the seventies caught much of the established European motorcycle manufacturers off guard. The bikes from the Land of the Rising Sun had nice convenient electric starters and quickly earned themselves a reputation for dependability.

The expression “boringly reliable” was quickly applied to anything made by Honda, because they were. A flat out ride on a Honda CB750cc was however anything but boring and the Kawasaki 900cc that followed it provided levels of excitement that beggared belief.

In the face of the Japanese assault on the motorcycle marketplace the British industry essentially offered too little too late, but BMW over in Germany were determined to keep their prestigious place at the top of the world’s most desirable motorcycles. To do this they understood that they couldn’t beat the Japanese at their own game.

Instead BMW decided to re-invent the game in the image that suited them. There was no point in trying to create bikes that looked or performed like the Japanese ones. A BMW needed to justify its more hefty price tag by being something no Japanese maker would dream of and this called for a bit of lateral thinking. 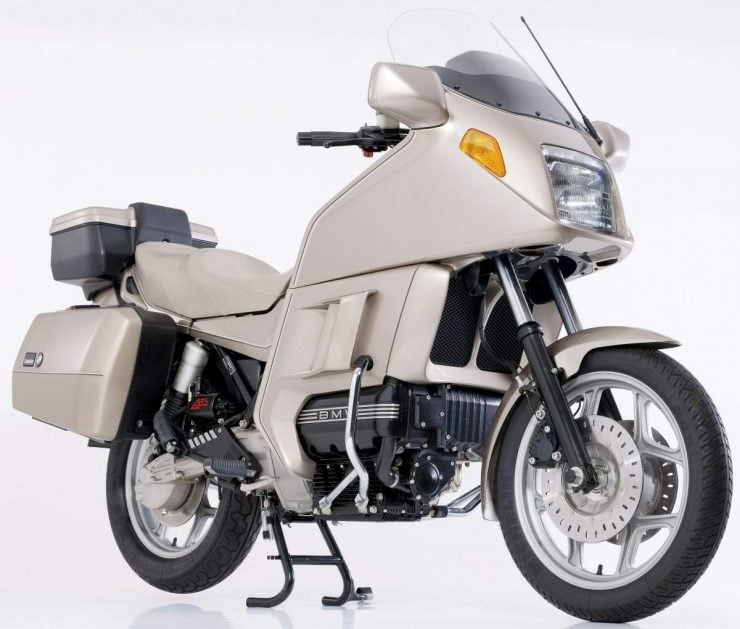 The Development of the BMW K100 – The Flying Brick

The tried and loved horizontally opposed boxer engine of the BMW motorcycles was coming under increasing pressure from emissions regulations and was running into a technical wall that called for its graceful retirement. If you’re going to replace something that has become an icon then that replacement needs to be something so good that people will embrace it. To be “boringly reliable” the best formula is KISS (Keep It Simple Stupid).

The engineers at BMW came up with lots of ideas but none of them really fitted the bill. Change for the sake of change without any actual benefit. But then one day in 1977 a brave and lateral thinking soul named Josef Fritzenwenger came up with the idea that must have sounded so unbelievably daft that people’s bottom jaws likely hit the desktop in front of them. 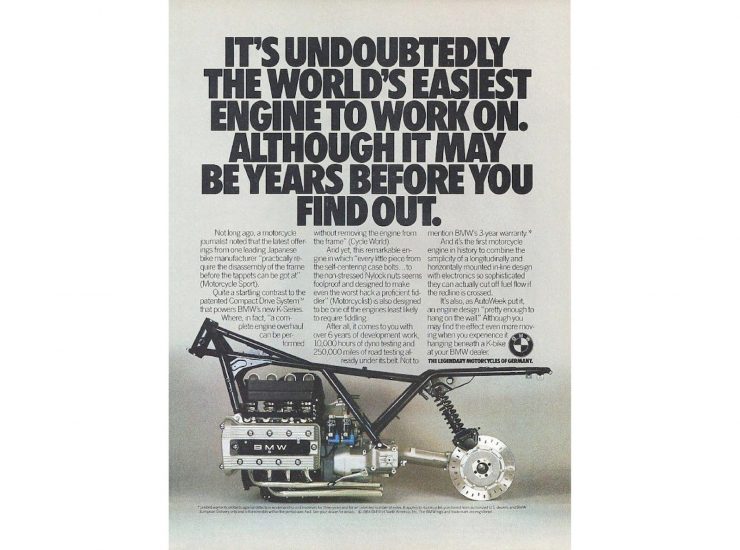 The idea is expressed something like this “Lets take the engine out of the boring little Peugeot 104 and (here’s the lateral thinking part) lay it flat on its side but let’s put it longitudinally in the bike chassis and connect it through the gearbox to the drive shaft so we’ve got an efficient straight line power train.”

So the concept was for a longitudinal four-cylinder liquid-cooled engine mounted the way they were on the Indian and Excelsior Hendersons of the twenties except lay the engine on its side. He’d actually built a prototype.

As the shock subsided the assembled engineers minds started to evaluate the idea, laying the engine on its side means lower centre of gravity, it has a near straight line drive train, and four cylinder engines are inherently smooth-running. 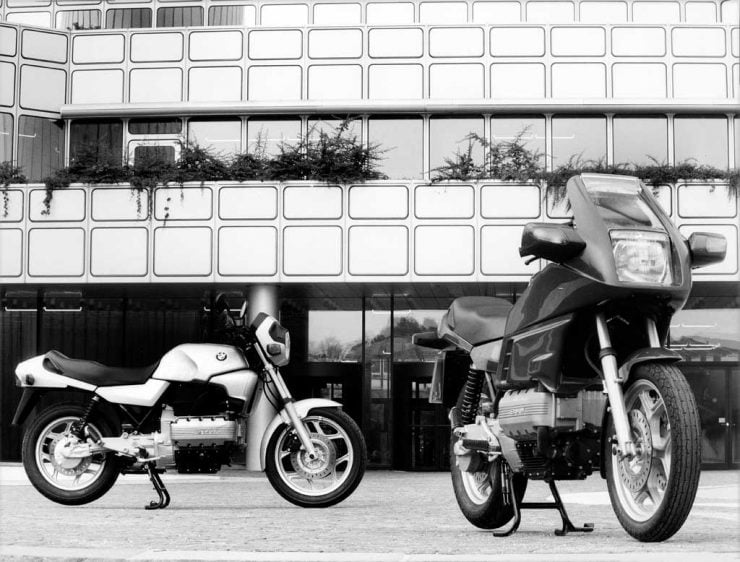 The bike BMW created was the K100. The once boring Peugeot four pot was replaced with a double overhead camshaft inline-4 – one of the most advanced inline-4s the motorcycle world had seen up until that time. The bike that was created to go around it was a true successor of the beamers of old. A bike that was nothing like the hot little numbers coming out of Japan nor was it trying to be. It was a bike with a whole set of unique and desirable qualities that would have people happily opening their wallets for. A new icon had been born.

There were benefits in the new design; the engine and transmission were kept accessible and serviceable, the engine was made durable and indeed would ensure these bikes developed a reputation for being able to achieve high mileages, and the bike was exclusive – it was just not a bike that just anyone could afford. Add to the mix BMW’s legendary quality control and attention to detail, and their experience in working with liquid cooled and fuel injected engines and you have a formula for a very special bike. 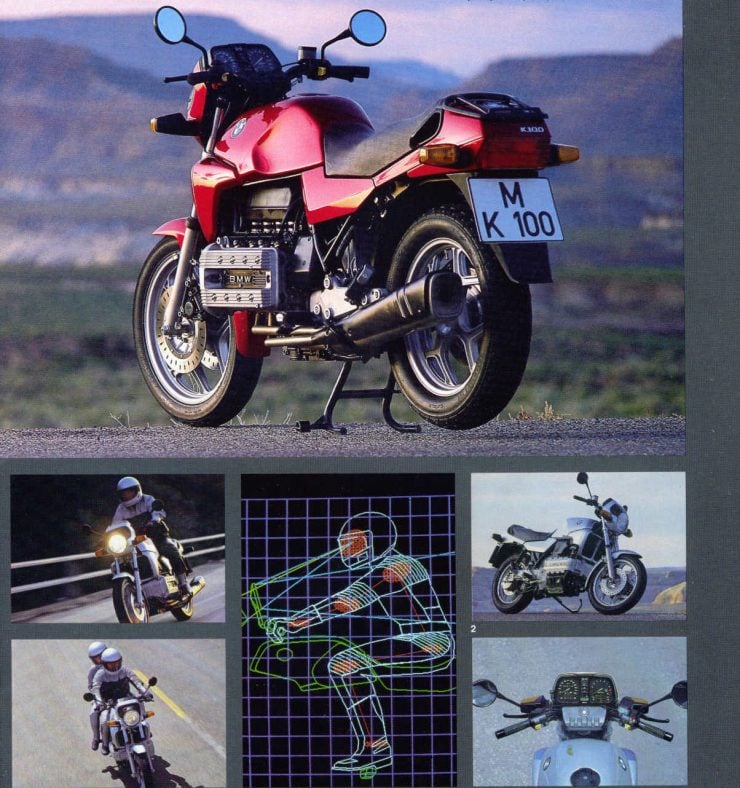 In the original design the K100’s engine was kept simple and conventional. It had two valves per cylinder and the double overhead camshafts were adjusted by the old fashioned and reliable shim and bucket method. The fuel injection system was a Bosch LE Jetronic system much like that being used on the BMW cars of the period and this system provided much improved fuel control smoothing out torque and power whilst increasing them and providing improvements in fuel economy and therefore range.

Indeed this bike combines both state of the art engine design with repair-ability that might best be compared to the older model Land Rovers which were renowned as vehicles one could literally do a complete engine overhaul on without taking the block out of the vehicle. With the K100 the cylinder head and top of the engine are easily accessible on the left side of the bike and the crankcase and crankshaft on the right. It just doesn’t get any better than that on an expedition bike or one for any other purpose. 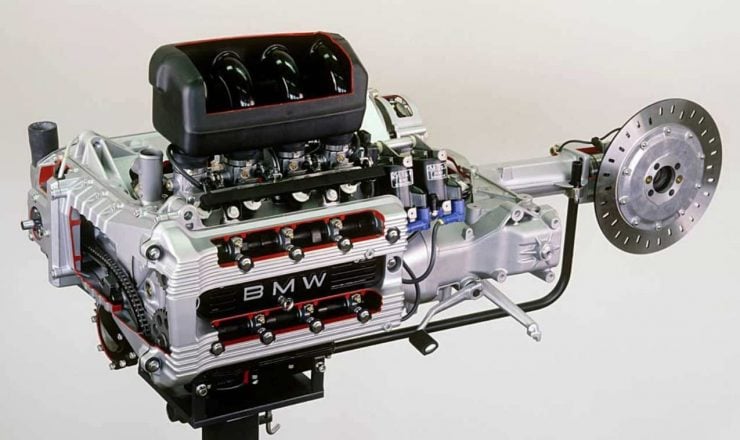 The K100 soon earned itself the nickname “The Flying Brick” and these were and are a bike that will fly nicely and safely without so much of the boy racer effort that the Japanese bikes demand. Whilst the Japanese bikes were known for requiring the sort of sweat on the brow intensity of a Japanese Anime hero the BMW K100 will go almost as quickly with such impeccable ease that one can have a Strauss waltz playing through your earphones and enjoy the ride all the more.

The K100 was “upgraded” to double valves in 1990 for the K1 and in 1991 for the K100RS. The bikes also got ABS on later models, and they were offered with a variety of fairings, accessories, and capabilities.

The K100 is increasingly becoming popular for customisation – and they are fantastic candidates for it. Whether you want to create a cafe racer, scrambler, or a superb vintage touring bike it’s hard to imagine a better candidate than a “Flying Brick” as your foundation. If you are willing to let go of the venerable old horizontally opposed engine of yore and embrace this more advanced and much easier to work on machine then I can’t imagine you being disappointed with the custom bike you create. 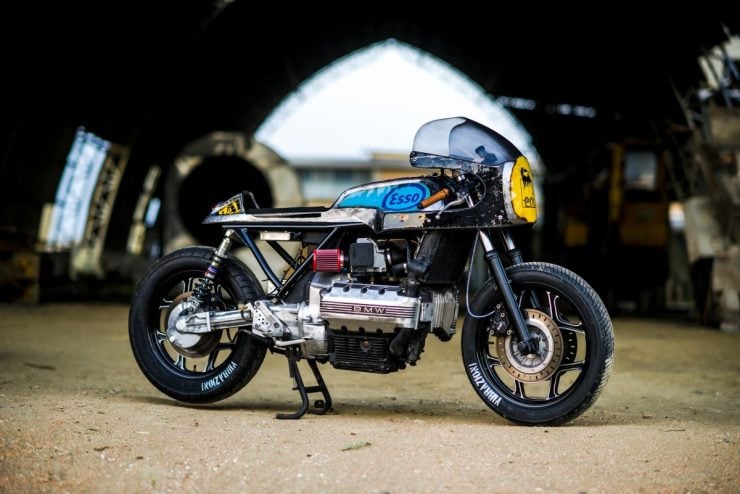 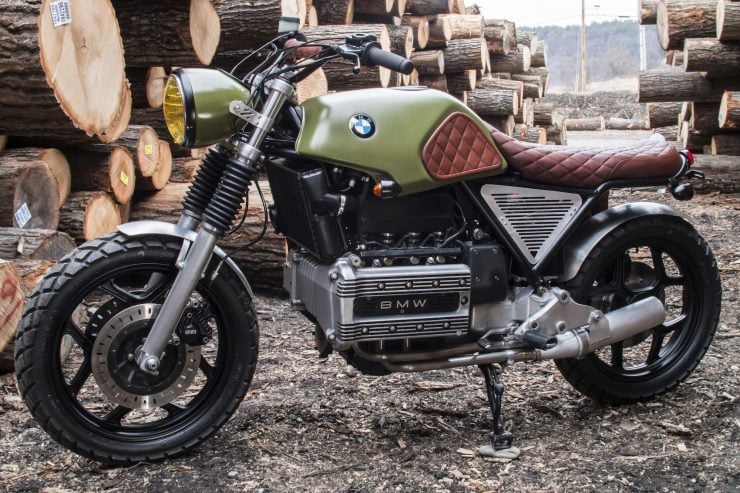 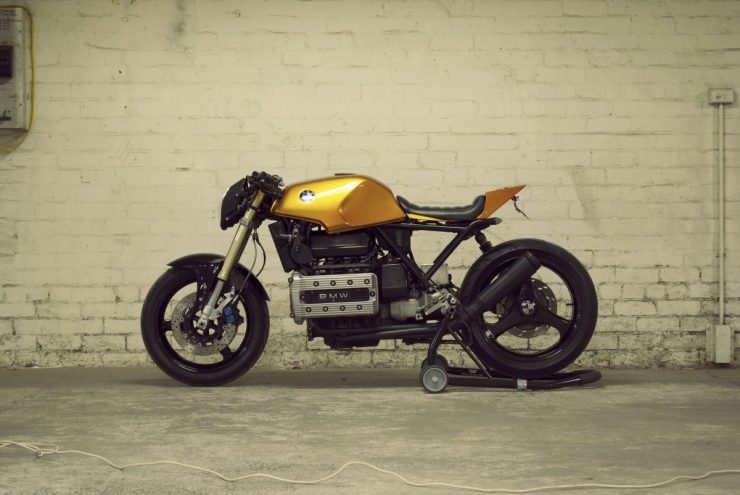 Editor’s Note: If you have tips, suggestions, or hard earned experience that you’d like to add to this buying guide please send us a message. We’re always looking to add to our guides, and your advice could be very helpful to other enthusiasts, allowing them to make a better decision. 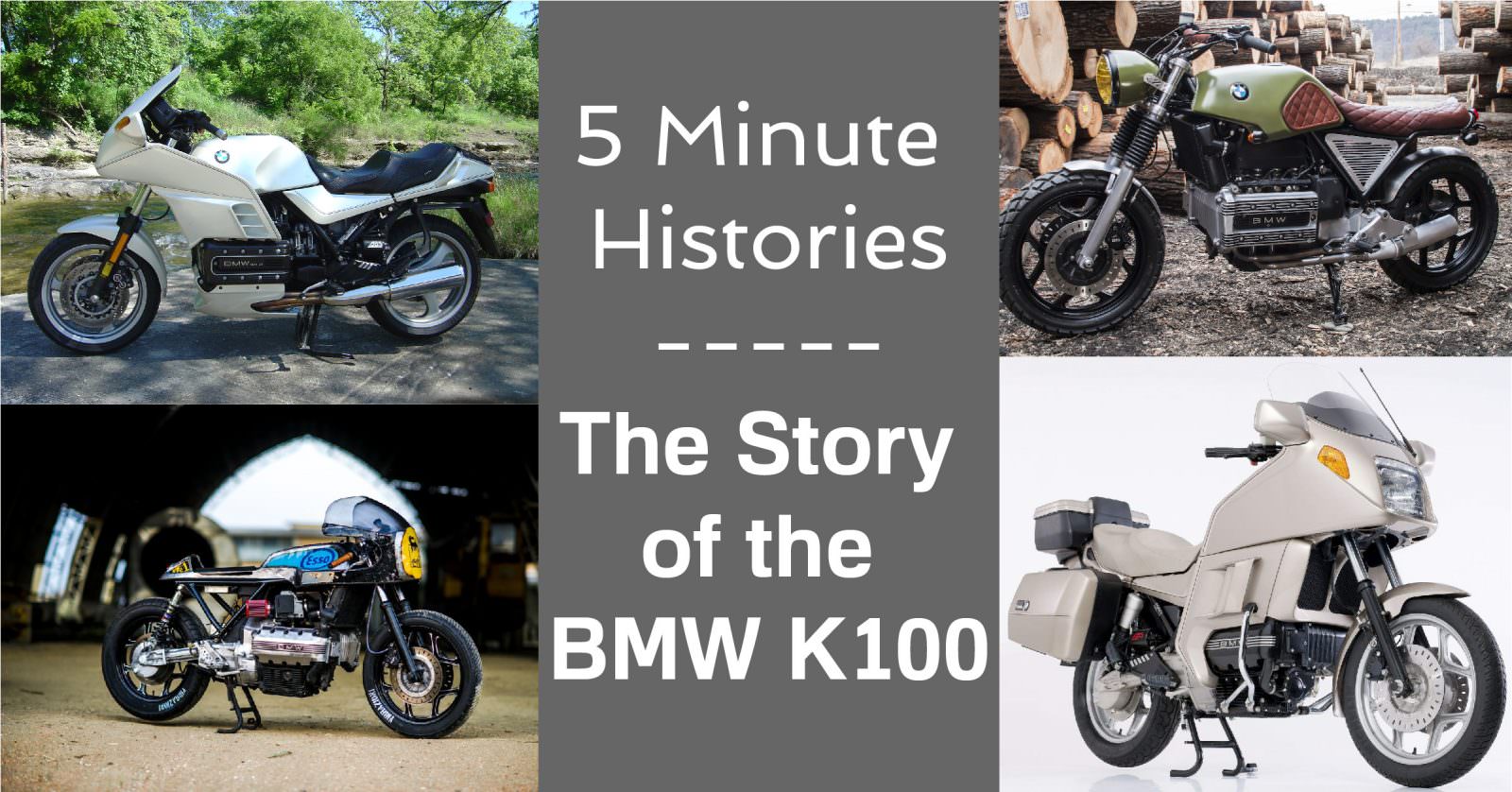