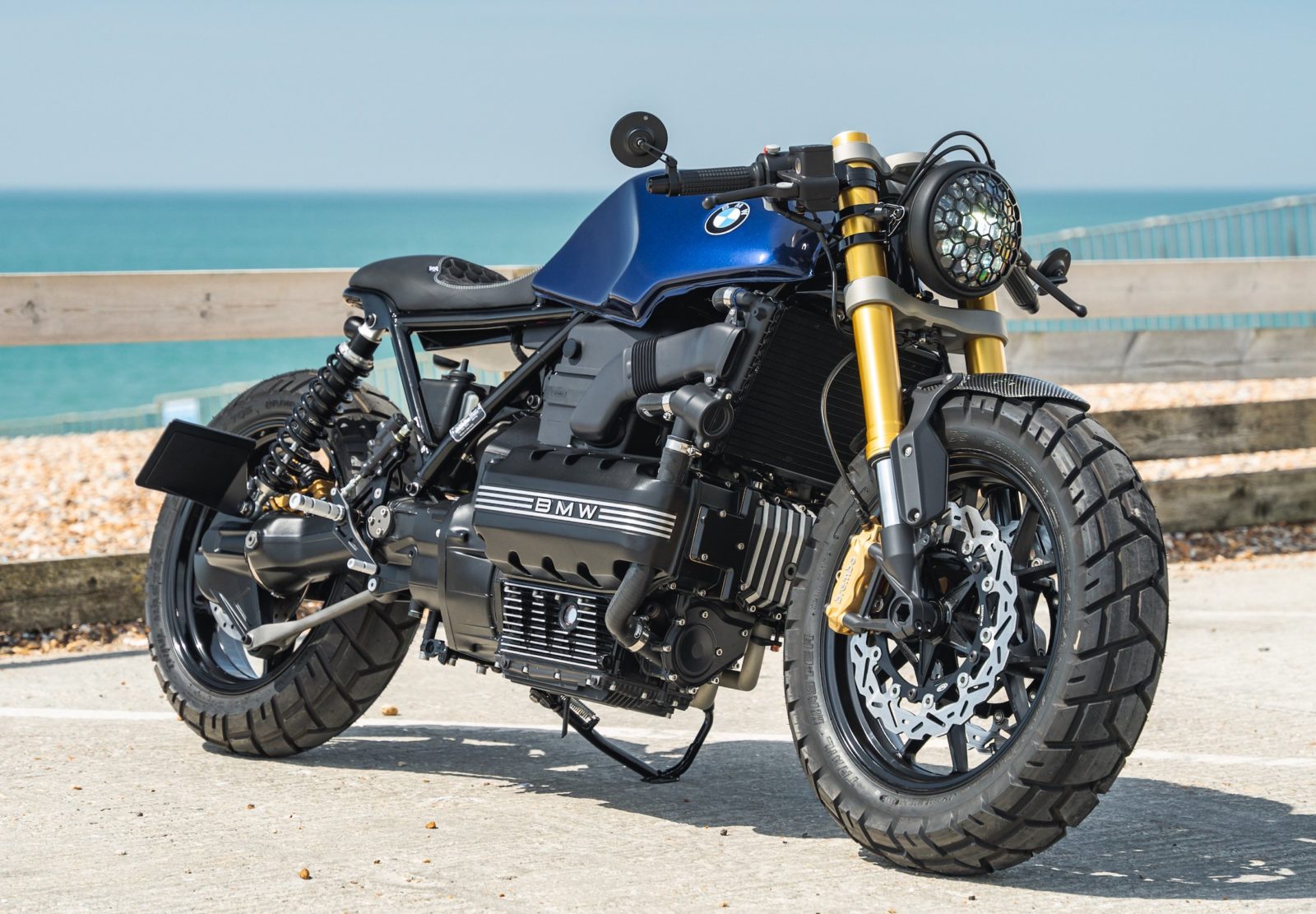 This 1992 BMW K1100 has been rebuilt by the team over at Kustom Moto into a modern cafe racer. Unlike many vintage customs, this bike will be genuinely quick by modern standards thanks to its 100+ bhp engine, its modern suspension, and and uprated brakes.

Nicknamed the “Flying Brick,” the BMW K series motorcycles represented a major technological step forward for the German company when first released in 1982. The K100 is powered by an inline four-cylinder engine with double overhead cams and Bosch LE-Jetronic fuel injection.

In the late 1970s it was clear to the executives at BMW Motored that they were going to have to vastly modernize their motorcycle offerings to better compete with the surging popularity of the advanced motorcycles coming out of Japan. 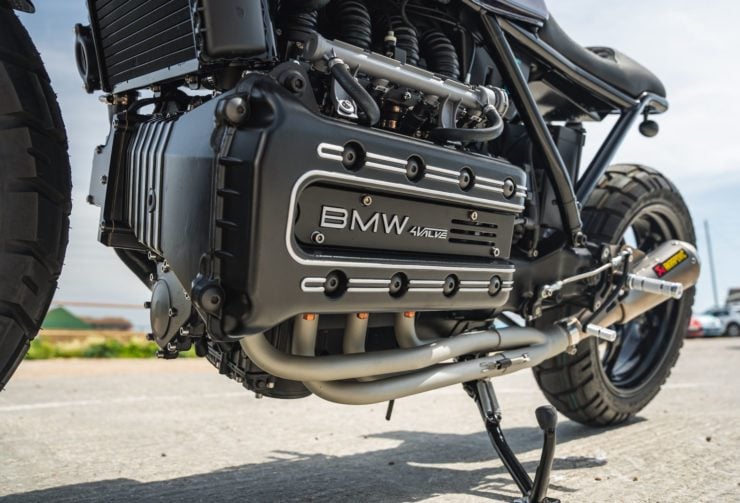 The BMW K series engine is an inline-four that is laid on its side, the valves are on the left and the crankshaft is on the right.

Most agree that it was the release of the Honda CB750 in 1969 that triggered this change. The CB750 with its transversely-mounted inline-four cylinder engine with a single overhead cam, built in 5-speed transmission, electric starter, front disc brake, and no oil leaks was a revelation by the standards of the day.

Many Western motorcycle marques fumbled the ball and didn’t innovate in time to compete with the Japanese and as a result many went bankrupt or were rolled into conglomerates.

As the 1970s progressed and the Big Four Japanese motorcycle manufacturers went from strength to strength BMW began to make plans to significantly upgrade their two wheeled offerings. Inline-four cylinder engines seemed to be the way of the future, however they couldn’t copy the upright transverse layout used by the Japanese (though pioneered originally by the Italians).

For the K series BMW developed an inline-four cylinder engine with a 1000cc displacement that was laid on its side, with the cams on the left and the crankshaft on the right. This engine arrangement allowed the torque to be sent directly into the gearbox and from there to a shaft drive to the rear wheel, with just a single 90º direction change to get it to the rear wheel. 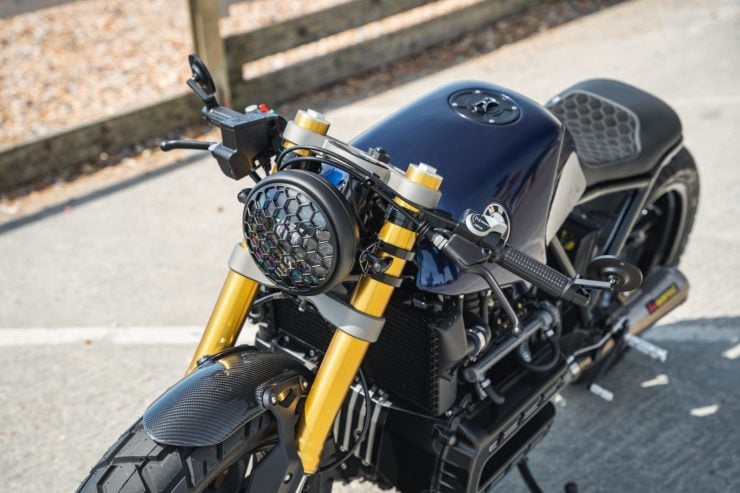 This bike is a good example of a modern cafe racer, it’s a 21st century version of those classic bikes ridden by the Ton Up Boys out of the Ace Cafe all those years ago.

The additional benefits of this layout include its very low center of gravity and the easy access afforded to all the major engine components for servicing or repairs.

First introduced in 1982, the BMW K100 would be joined by the three-cylinder K75 in 1985, and the BMW K1 would join them both in 1988. Multi-cylinder K series motorcycles remain in production today with BMW, including many of the company’s most advanced models.

The BMW K1100 was introduced in 1993 as a replacement for the K100. It featured a slew of upgrades over its predecessor and perhaps most importantly its engine was 10% larger, at 1093cc vs 987cc.

The K1100LT and K1100RS model variants were both high-end sport tourers aimed squarely at the pinnacle of the market in both Europe and the United States. 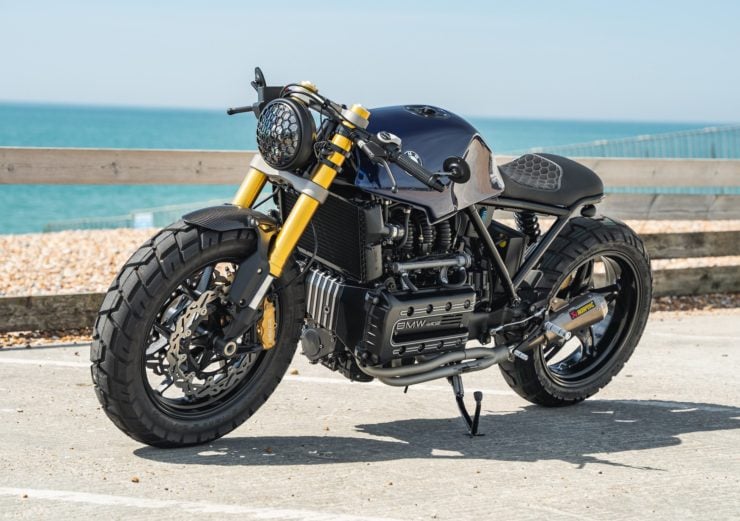 The front and rear suspension have been completely replaced with modern units and the front brakes have been significantly upgraded, further boosting the performance ability of the 100 bhp bike.

BMW engineers had increased the bore slightly to get the additional swept capacity, they also developed lighter pistons and reduced the engine’s reciprocating mass to reduce vibration and improve performance.

Suspension, aerodynamics, chassis, and brakes were all also similarly improved, some with lessons learned from the BMW K1.

In the early 1990s there were very few sport touring motorcycles that could hold a flame to the K1100 series, and interestingly BMW still remains at the pinnacle of this genre today.

The K1100 you see here has been vastly modified from its original form by the team at Kustom Moto, a team that has become somewhat specialist in the modification of BMW K series motorcycles over the past few years, with a number of builds under their belt. 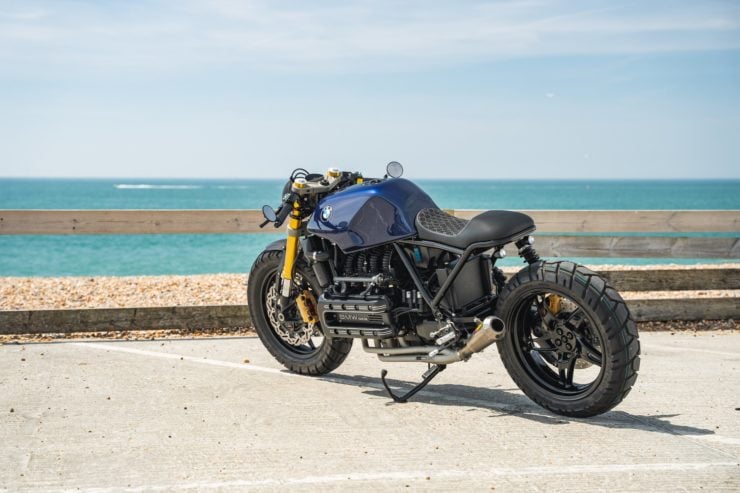 The rear subframe has been cropped and a shorter single-seat has been fitted – this is a bike that’s designed to carry just a single person at a time.

This build began with a full teardown, the front and rear suspension were completely replaced as were the brakes, and the original bodywork was all discarded in favor of a modern, minimalist look.

The new front end was sourced from a modern BMW R nineT, it includes upside down 55mm forks mounted in bespoke triple trees and it keeps the brakes – a pair of Brembo Monobloc calipers on floating rotors.

In the rear the original suspension has been replaced with a modern, fully-adjustable Wilbers monoshock and there’s an additional disc brake on the back to further aid in stopping. The rear subframe has been cropped and a new seat fitted to match.

Up front you’ll find classic cafe racer clip-ons and a headlight tucked in behind a black grille. The front fender is made from carbon fiber and it covers a chunky Shinko Trail Master tire, there’s a matching unit on the back.

This unusual custom BMW is now being offered for sale on Collecting Cars out of Brighton in the United Kingdom, if you’d like to read ore about it or register to bid you can visit the listing here. 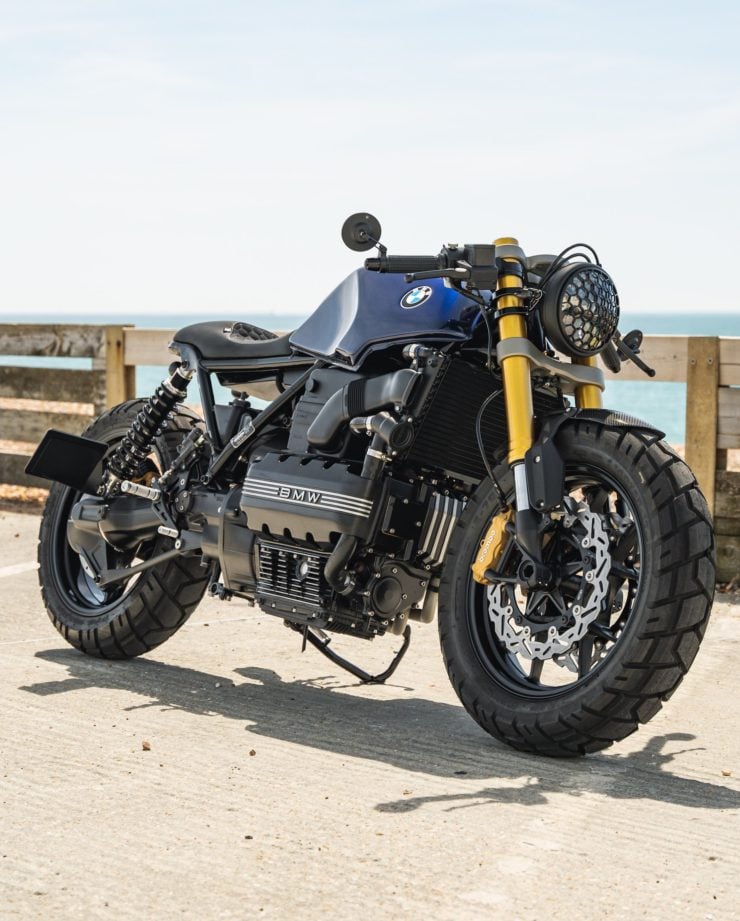 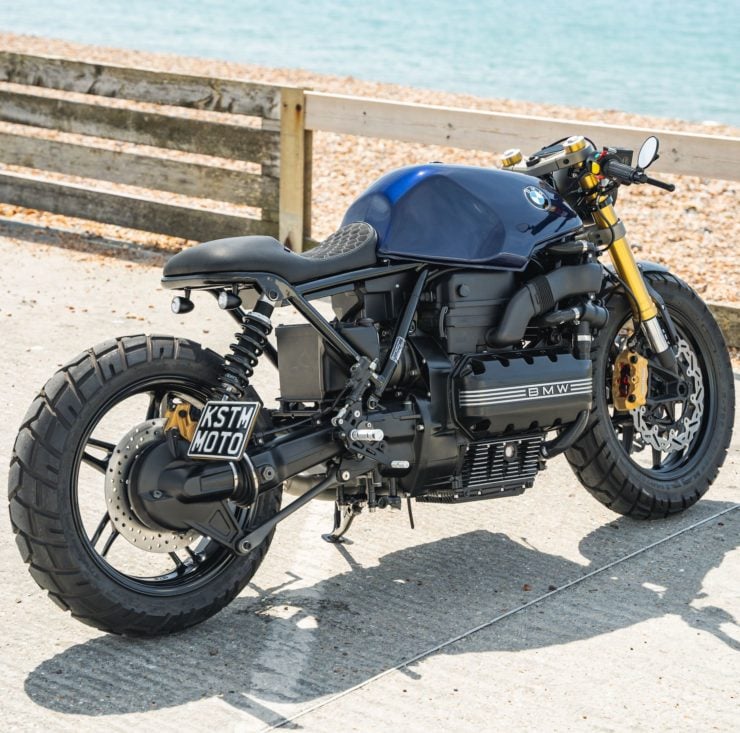 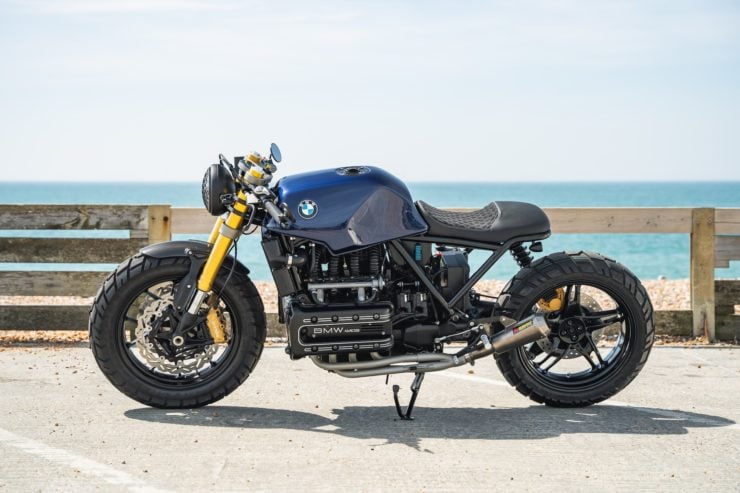 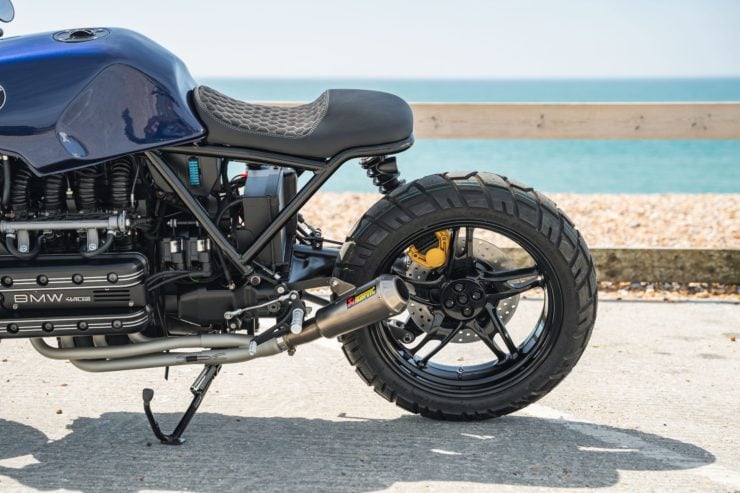 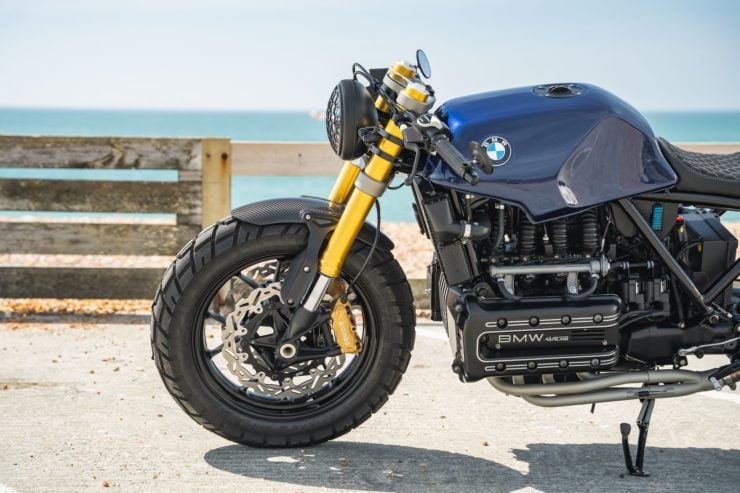 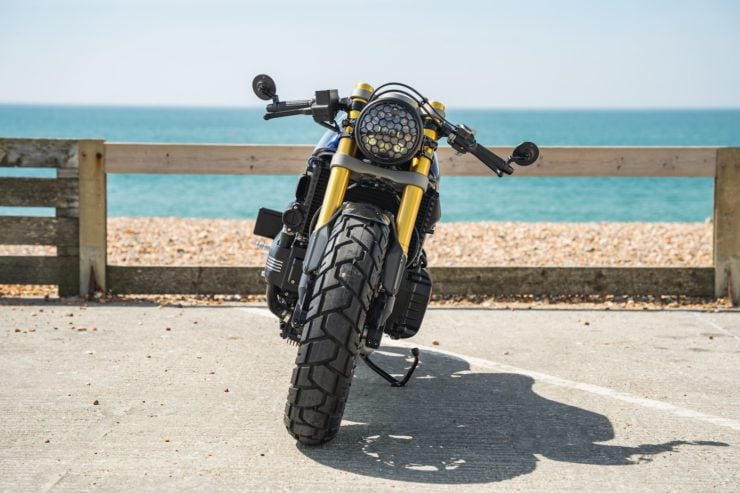 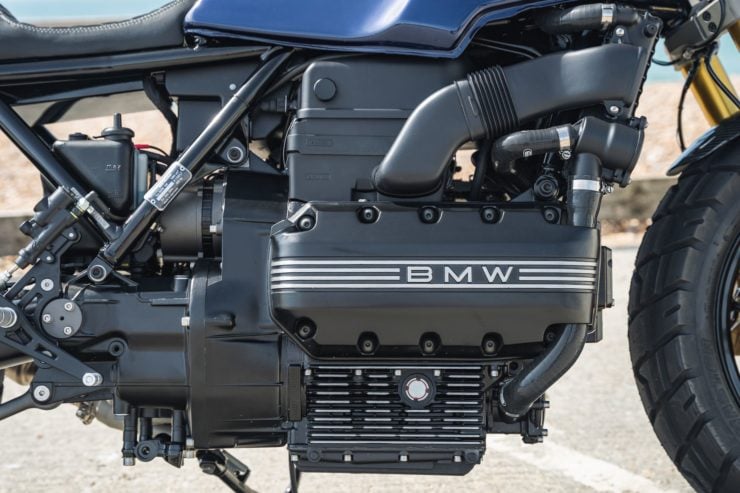 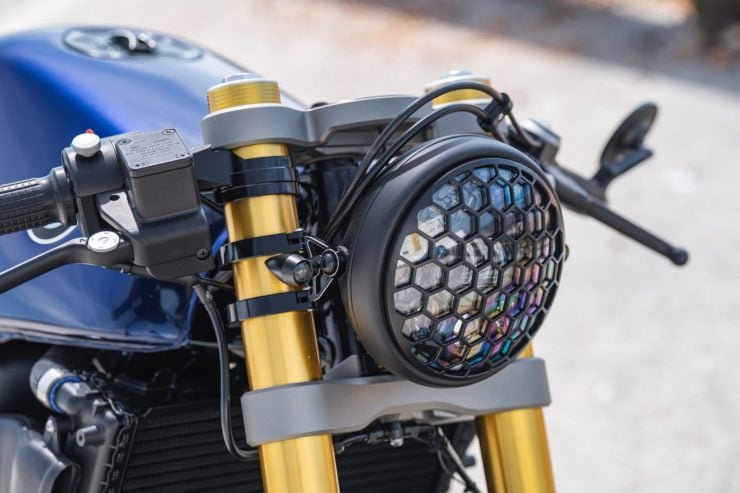 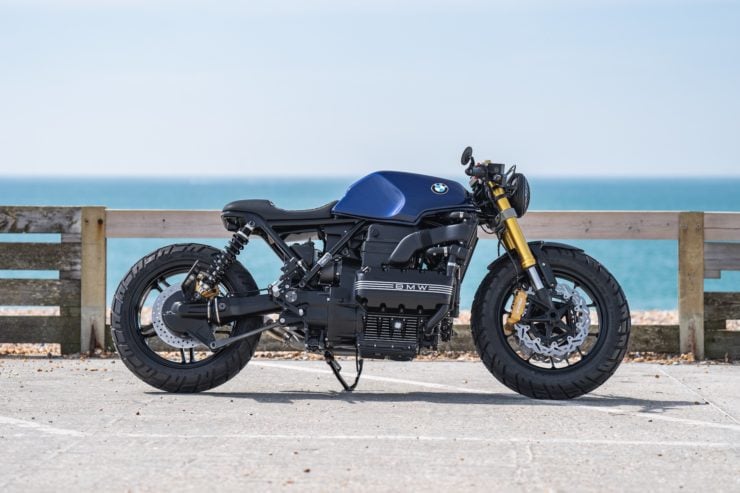